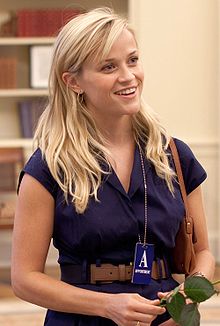 There isn't much to say about Reese Witherspoon's choice in cars. Think about it: Nashville native Reese Witherspoon? Wearing a plaid blouse and a mid-length skirt and ballet flats and Prada shades? Toodling around Brentwood in a Mercedes-Benz GLK 350 in the photo linked below, with a blonde friend who is also wearing a mid-length skirt and ballet flats? It's like one big lifestyle uniform, y'all.

Which is just F-I-N-E fine. Reese wears the look well and somehow manages to retain a degree of realness, unlike many of her Hollywood brethren and sisteren -- or her Nashville equivalents, for that matter.

Then again, we may be giving Ms. Witherspoon a pass because she's one of the few celebs we truly like. For one, she seems about as grounded as any multi-bajillionaire movie starlet can be. For two, she's a kickin' actress most of the time. (Did you ever see Freeway? HOLY CRAP YOU HAVE GOT TO SEE FREEWAY.) And for three, unlike everyone else on her side of the San Andreas Fault, she's not driving an Audi. Werd.