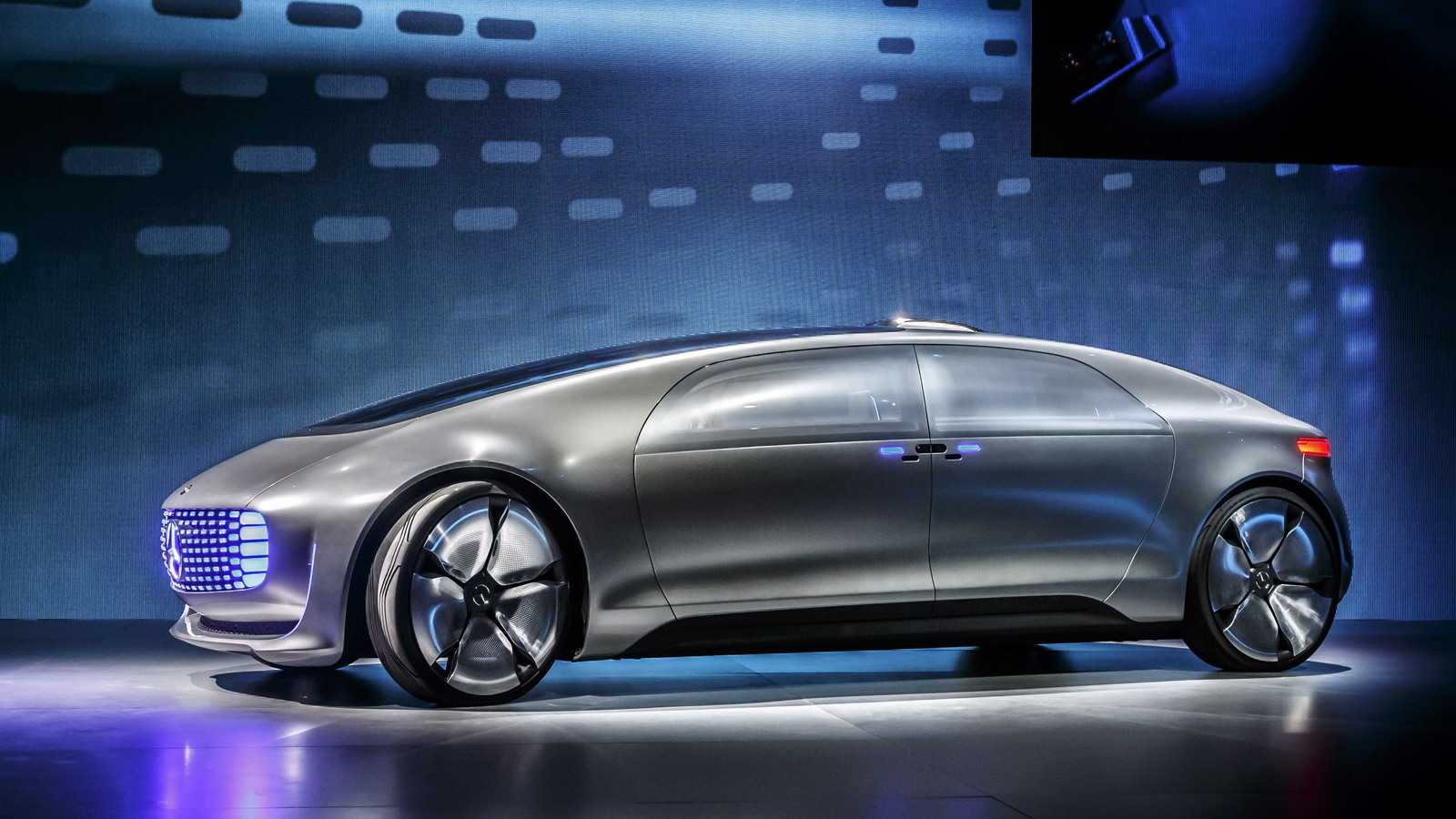 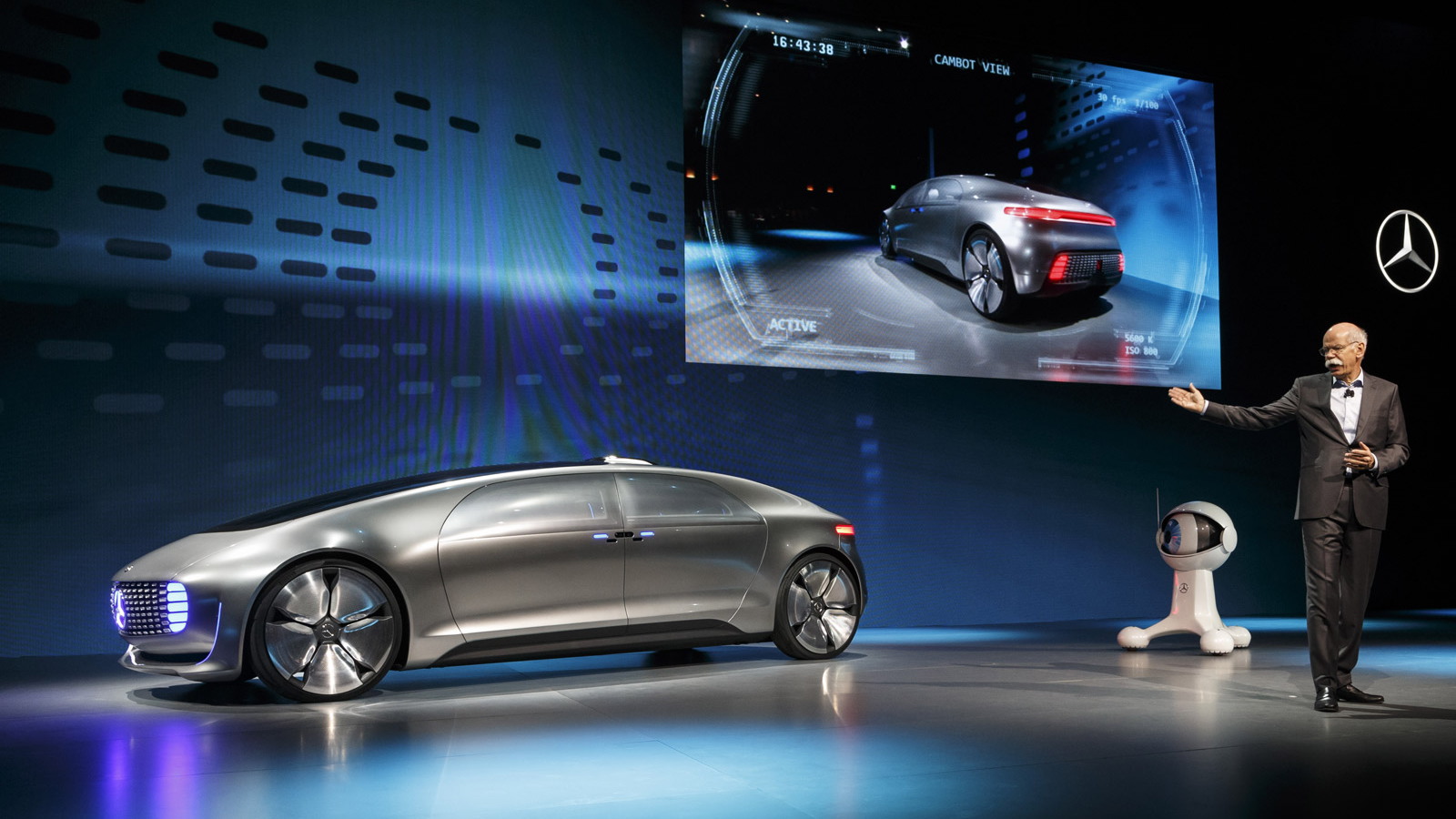 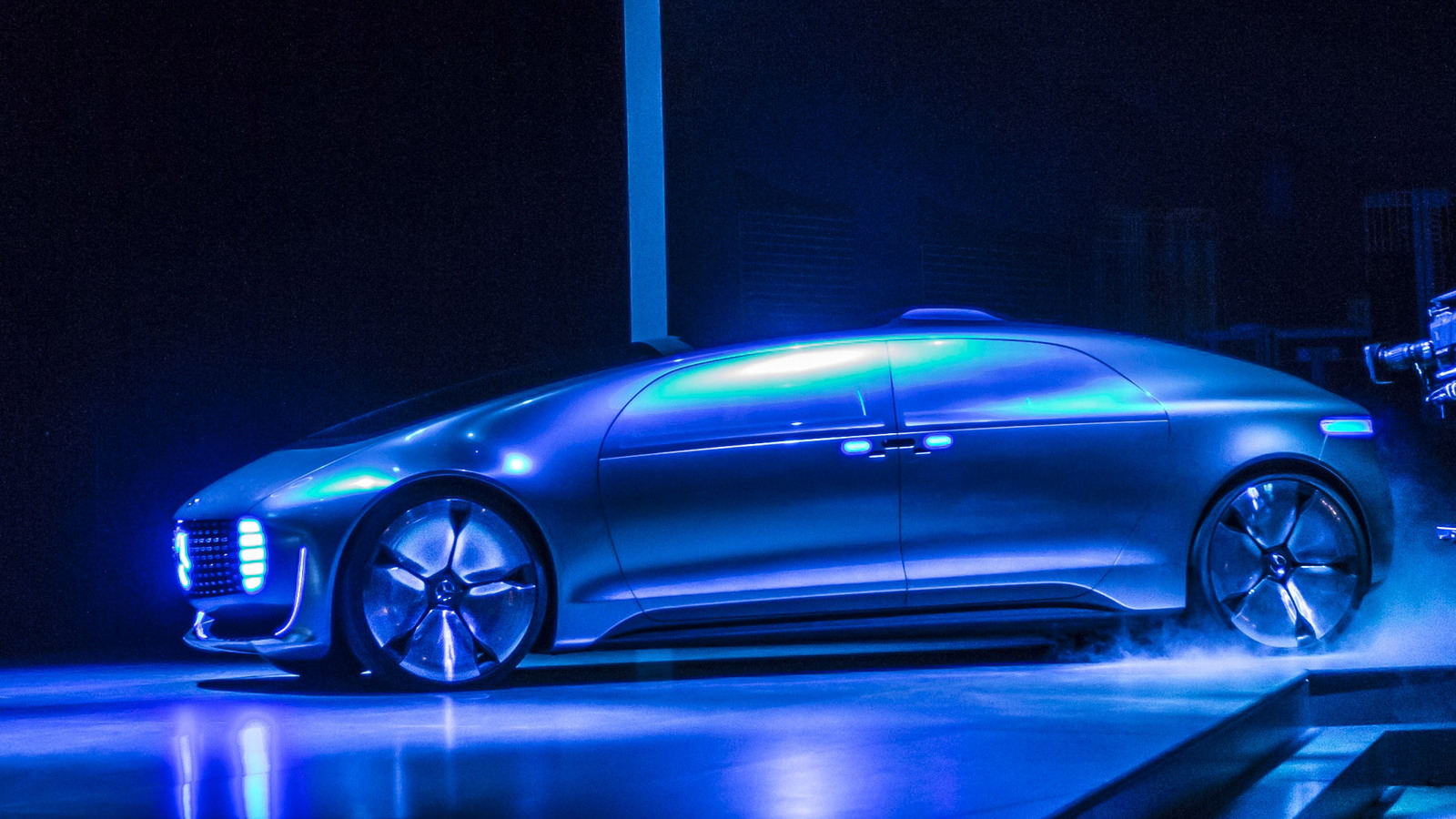 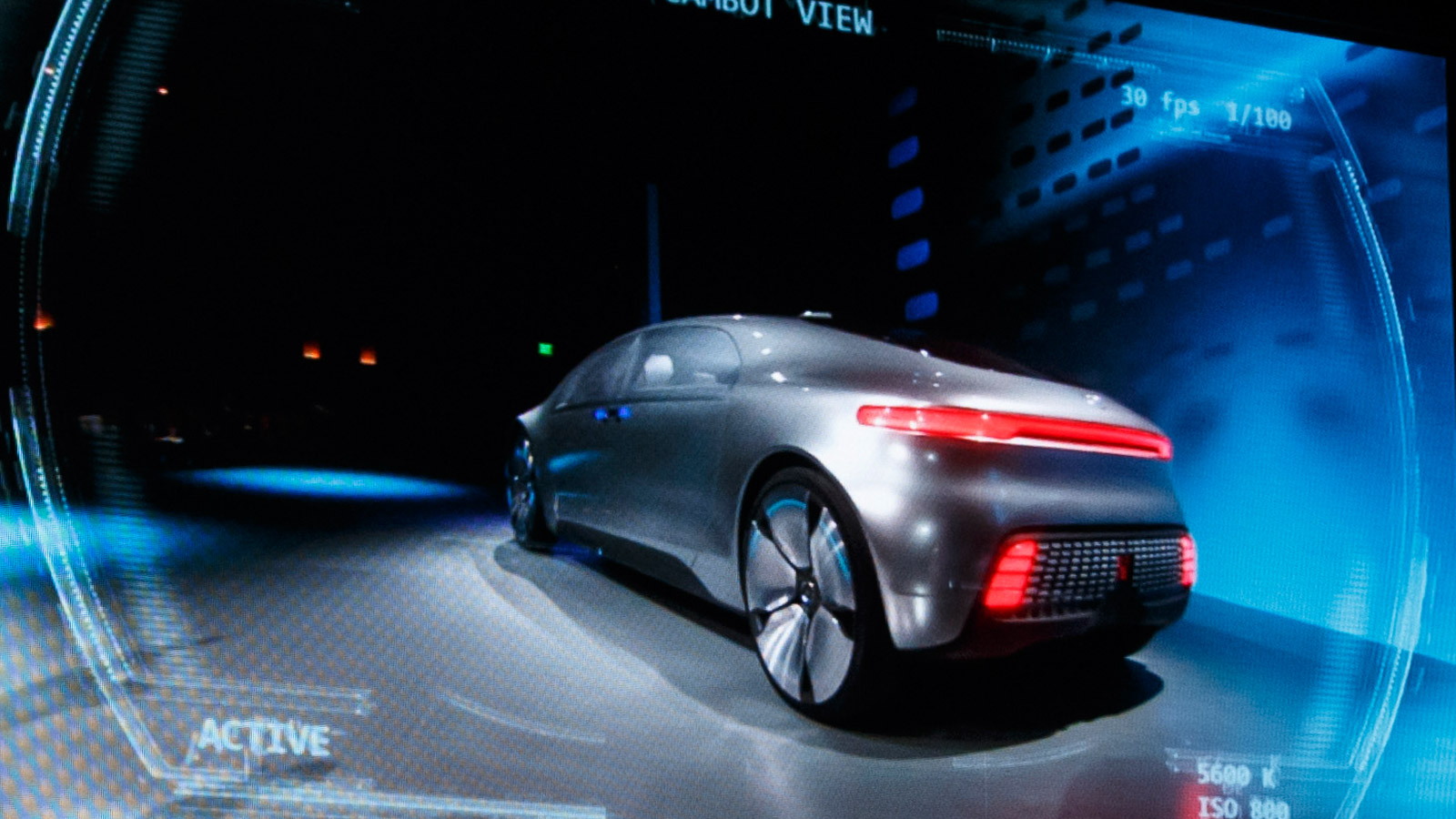 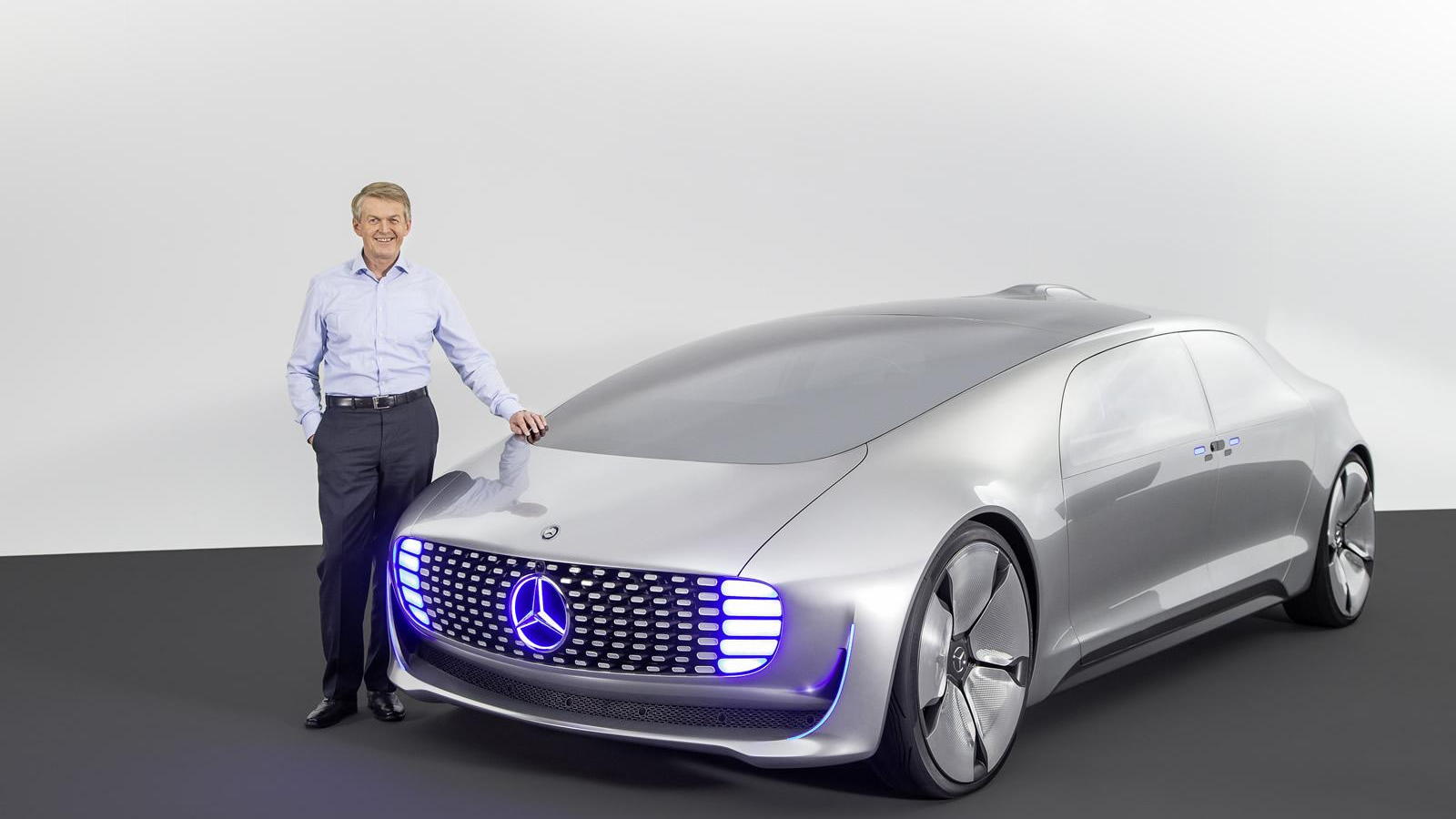 The new autonomous car concept Mercedes-Benz has been teasing for this week’s 2015 Consumer Electronics Show in Las Vegas has been revealed as the F015 Luxury in Motion, a self-driving, fully-connected, hydrogen-electric plug-in hybrid that offers a vision of driving in the future. In essence, it shows how the car of the future will not only be a means for getting from one point to another but also a usable space for entertainment or work as well as a platform for communication and interaction.

The hydrogen-electric plug-in hybrid system powering the F015 is relatively unique in that it produces zero emissions at all times. Mercedes hasn’t gone into detail but says the drivetrain consists of a hydrogen fuel cell stack, a lithium-ion battery and two electric motors rated at 134 horsepower each.

With a full battery (which can be charged at home via cable-less inductive means), the F015 is capable of driving up to 124 miles. And with a full tank of hydrogen, this range increases to 684 miles, by having the fuel cell top up the battery whenever the charge is running low. The setup is an evolution of the one in 2011’s F125! concept.

Then there is the autonomous tech, which relies not only on sensors but also on Car-2-Car and Car-2-Object communications technology. Already previewed in the S-Class-based S500 INTELLIGENT DRIVE prototype, multiple sensors, advanced 3D cameras and highly-detailed digital maps help drive the car without the need for an actual driver.

Inside the F015 is a variable seat system with four lounge-style chairs that can rotate far enough that they all face each other. When the car reaches its destination, the seats then rotate towards the door for an easy exit for passengers.

A central idea of ​​the concept is a continuous exchange of information between vehicles, passengers and the outside world. For interaction within the vehicle, the passengers rely on six display screens located around the cabin. They also interact with the vehicle through gestures, eye-tracking or by touching the high-resolution screens. Outside, the F015 uses laser projection, radio signals and LED displays to communicate with its surroundings.

The F015 clearly isn’t intended for production but it does show that Mercedes has the technology today to deliver a zero-emission vehicle that can drive itself and offer all the luxury one would expect of the brand. The automaker is hoping the concept’s introduction will drive the social discourse on mobility and the design of the urban environment ahead. This is particularly important in the area of legislation for autonomous cars, which is likely to remain the biggest hurdle for the technology’s introduction to the market.

"The single most important luxury goods of the 21st century are private space and time," Mercedes-Benz chief Dieter Zetsche said at last night's reveal. "Autonomously driving cars by Mercedes-Benz shall offer exactly that—with the F015 Luxury in Motion, this revolutionary concept of mobility becomes tangible for the first time."

Zetsche went on to explain that Mercedes has a “master plan” in place to take the big leap required to see autonomous cars move from the concept to production phase. The F015, he said, demonstrates where this may take us.