';
General Motors CEO Rick Wagoner conceded that there’s no one solution to providing fuel-efficient cars during his speech at the L.A. Auto Show on Wednesday. However, the GM boss is backing vehicles that could be charged by plugging it into a standard electrical outlet. In fact, GM wants to be the first carmaker to offer the so-called plug-in hybrids in large volumes. The first model is already in development and will be based on the recently introduced Saturn Vue Green Line hybrid crossover. 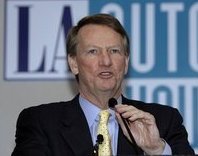 That same speech was interrupted by a protestor that wanted Wagoner to sign a pledge to make GM the fuel economy leader by 2010. Along with announcing plans for a plug-in Vue hybrid, GM also unveiled three new hybrid models for the 2008 model year in the form of the Saturn Aura sedan, GMC Yukon SUV and the Vue Green Line. Wagoner also promised to deliver biofuel drivetrains for the Hummer brand within three years. GM also is planning to have 12 hybrid models in lineup by the end of 2008, so the next 12 months will be very busy for the General.

Toyota’s North American head, Jim Press, commented that his company still has a lot of research to do and that GM’s push for the clean technology would help encourage consumer support and perhaps even spur the government into providing financial support for developing hybrids.