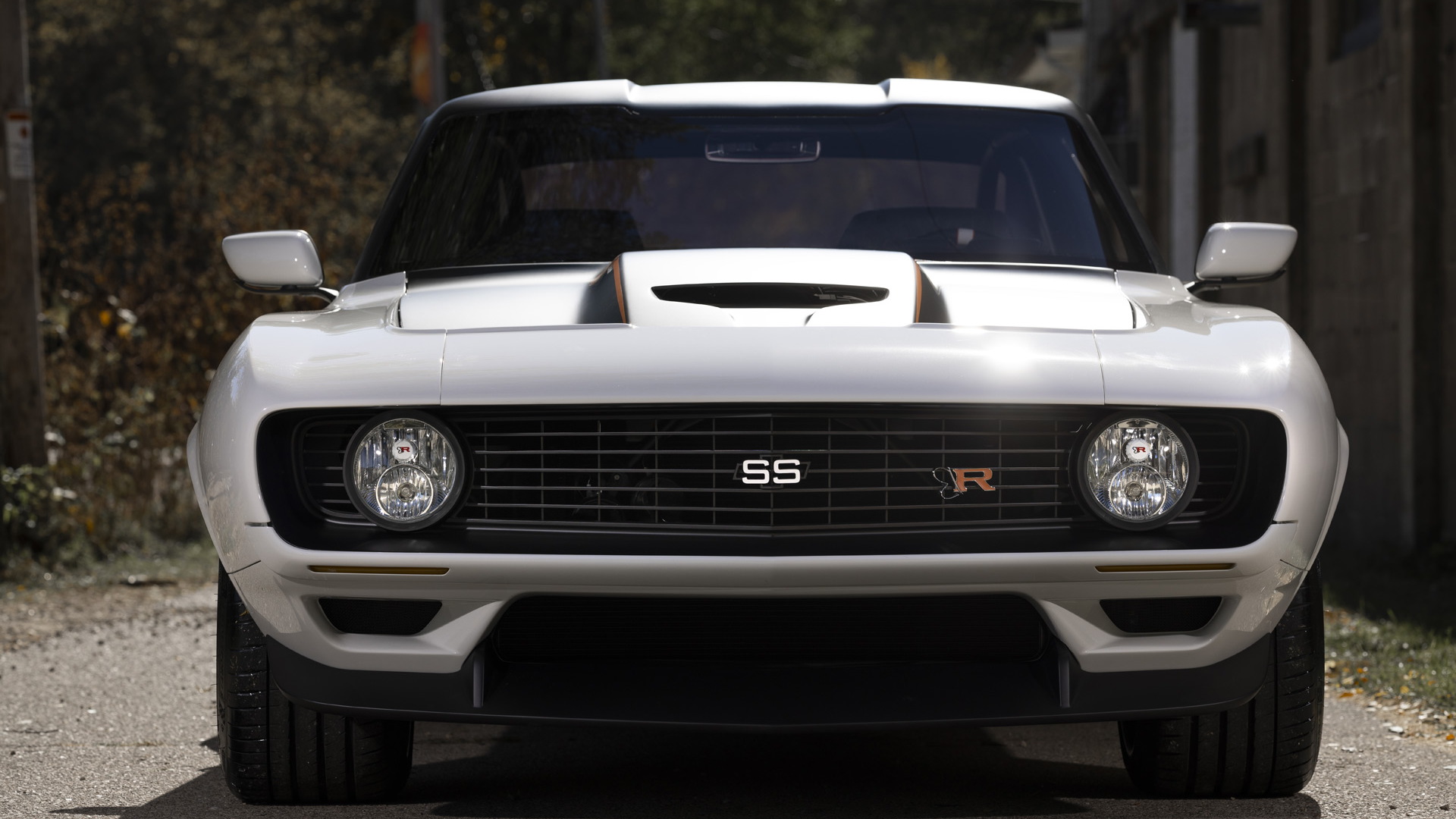 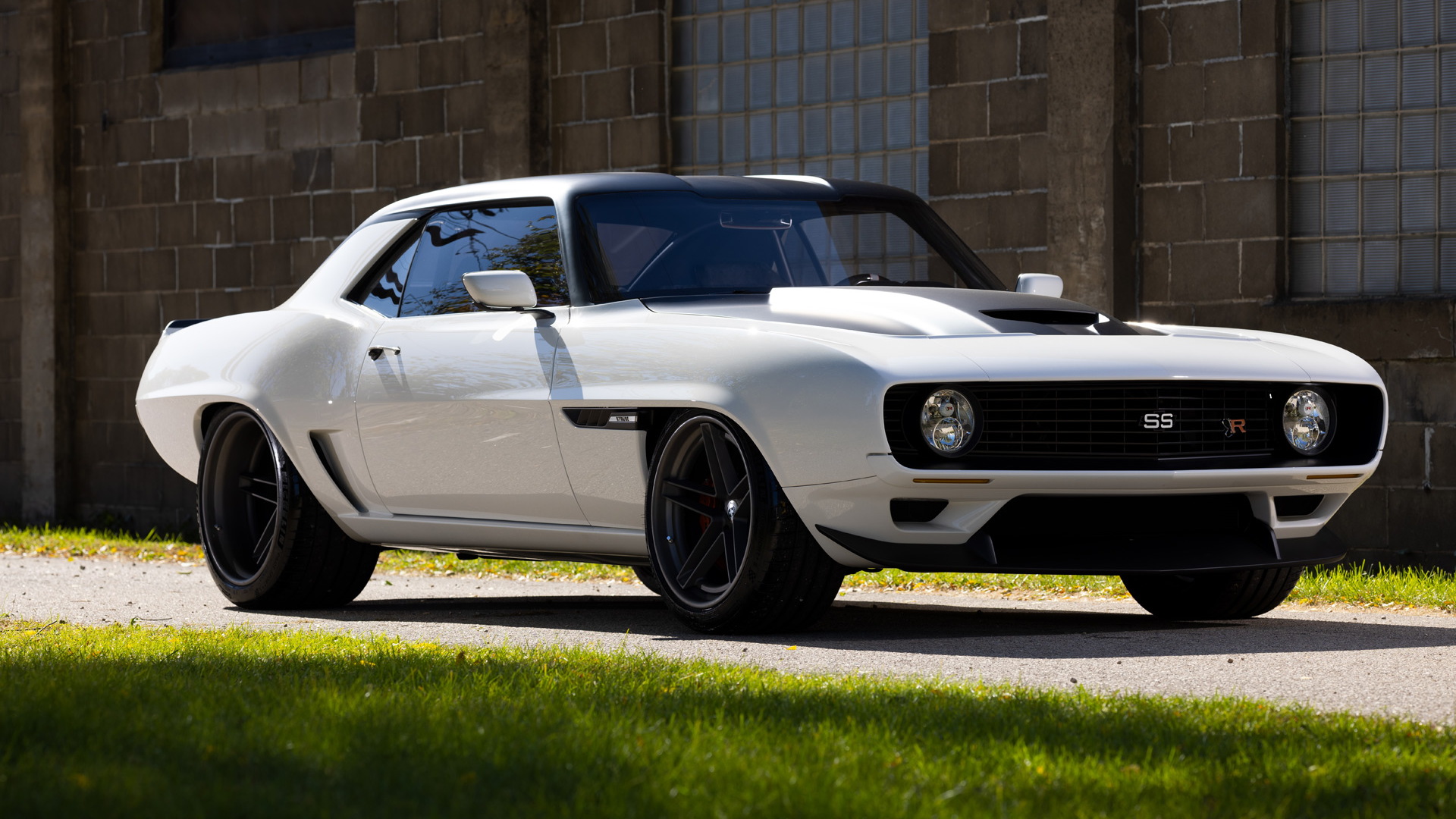 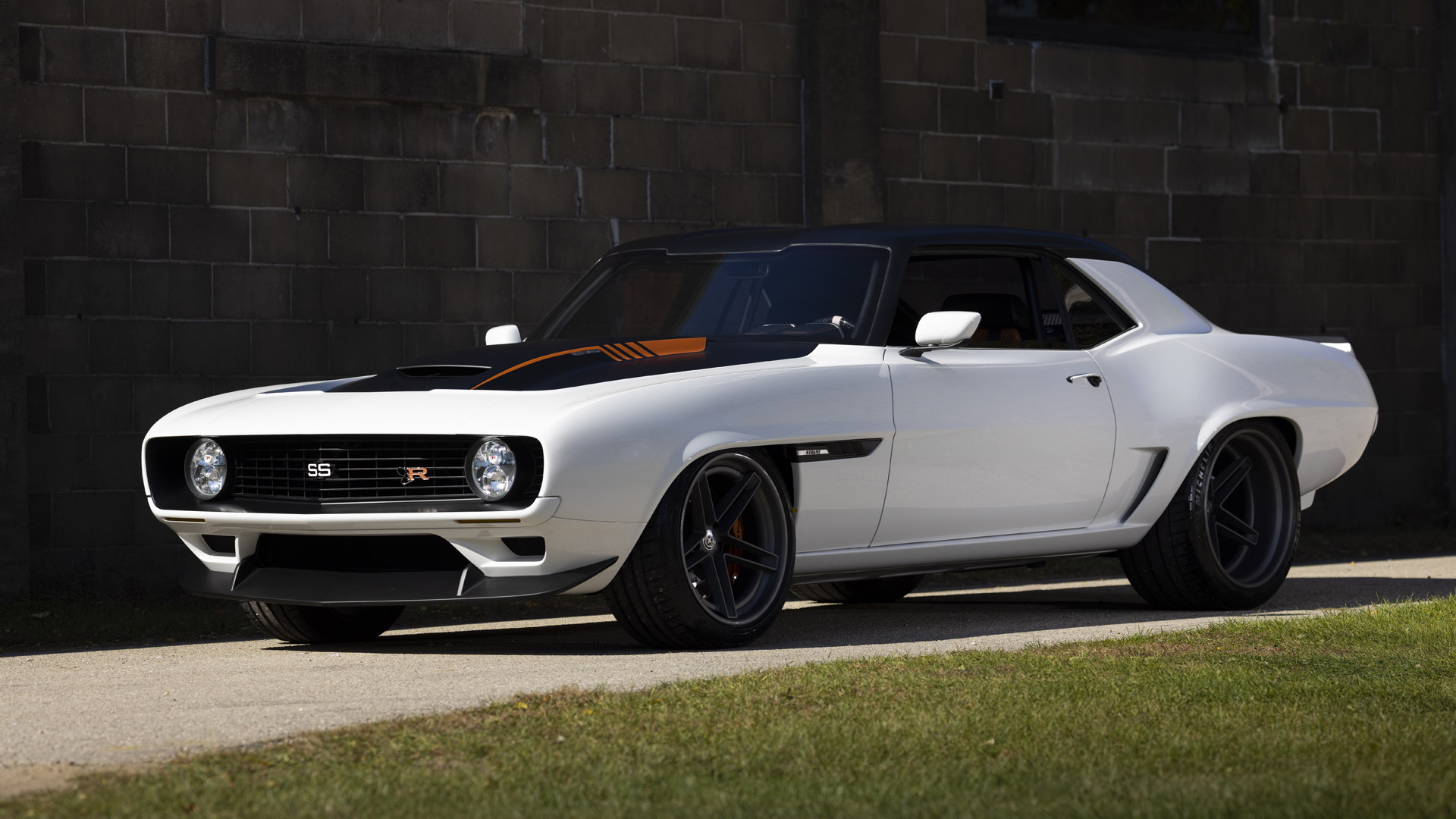 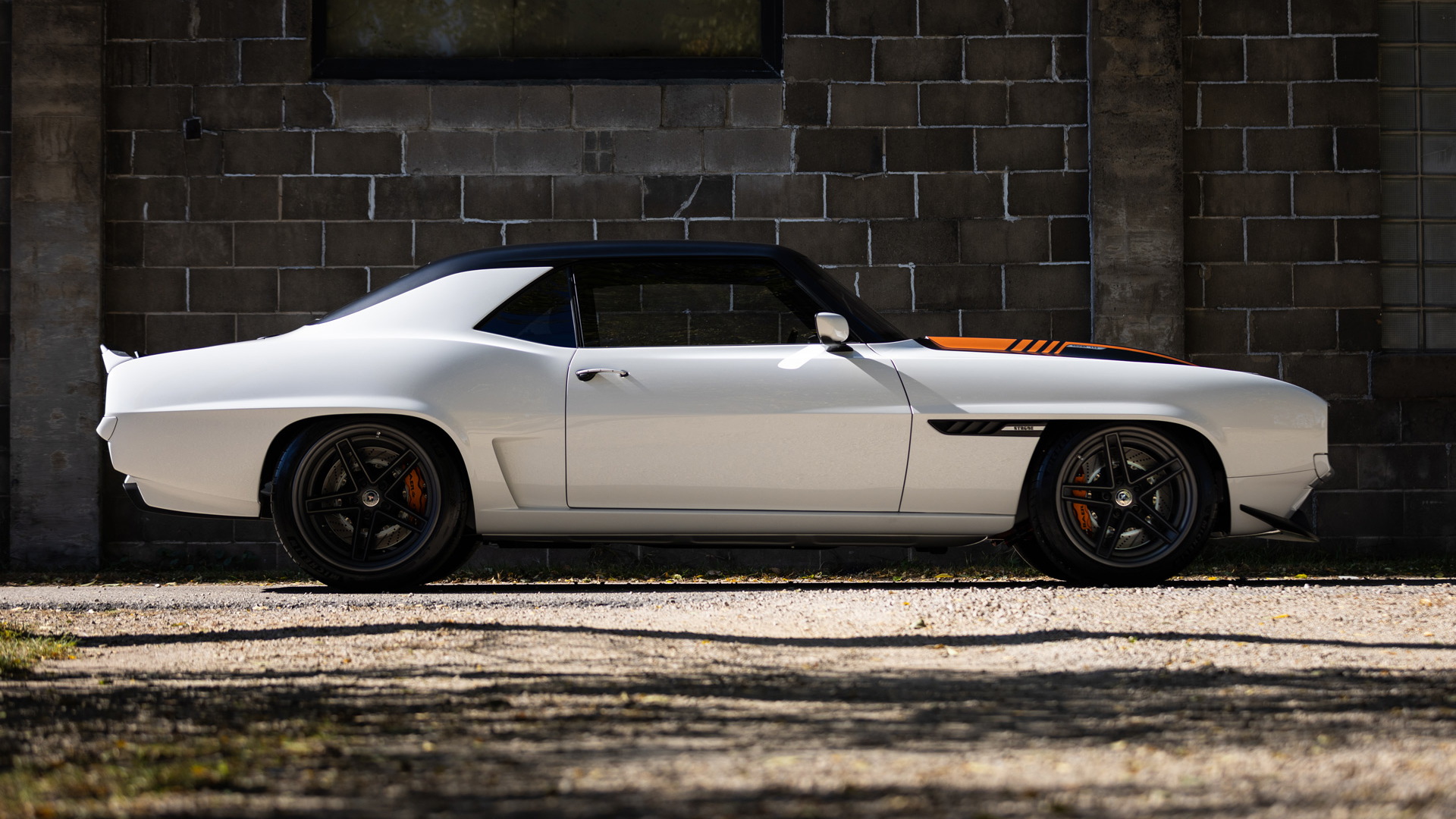 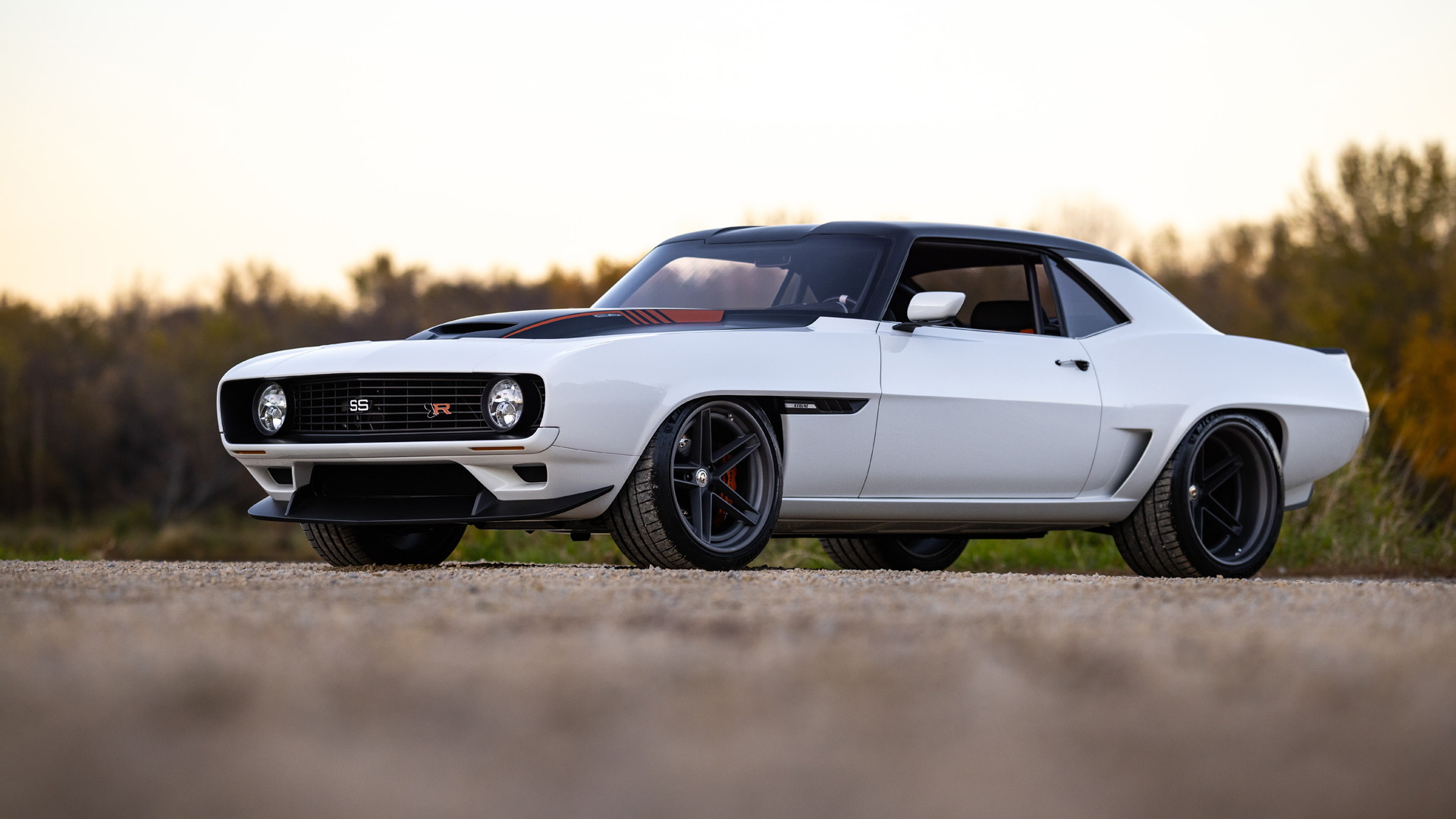 Ringbrothers' latest Camaro build, known as Strode, was unveiled this week at the SEMA show in Las Vegas. While it may resemble the 1969 classic, it's been almost fully built from the ground up as a new car. In fact, it shares just two parts with the original.

The build took over 6,500 hours to complete, with many of those hours spent preparing the carbon-fiber parts on the car. It's not a one-to-one copy of the original but a unique design modified to fit a modern chassis—the identity of which hasn't been disclosed.

To fit the chassis, the original design needed to be widened by five inches. The rocker panels also sit lower, the center of the roof features a recess, and the hood has been lengthened and reshaped. The fenders are also unique designs with cutouts for vents and body accents. Everything was then painted in BASF Glasurit Ghost White paint.

To achieve the look, Wisconsin-based Ringbrothers scanned the original 1969 Camaro body, then digitally modified it before producing it in carbon fiber. Custom 3D-printed and billet-machined parts were also manufactured.

Power comes from a Wegner Motorsports LS3 V-8 tuned to deliver 1,010 hp thanks in part to a Whipple supercharger. The engine also features hand-built headers and Flowmaster mufflers. Drive is to the rear wheels via a reworked Bowler Tremec T-56 Magnum 6-speed manual transmission and John’s Industries 9.0-inch rear end. The independent suspension is a Roadster Shop Fast Track design with QA1 MOD Series coil-overs. It all rides on custom HRE Wheels known as the Ringbrothers G-Code Edition. Stopping power comes from a set of Baer brakes.

The cabin features trim by Upholstery Unlimited and modern touches like Dakota Digital gauges, JL Audio sound, and a Vintage Air Gen IV climate control system. The reat seats have been removed, and in their place sits a custom roll cage.

“We wanted to push the limits of what we can do and showcase our capabilities with Strode,” Mike Ring, Ringbrothers' co-owner, said in a statement. “It is a radical rethink of the original Chevy Camaro, expanding its dimensions and levels of performance.”

The SEMA show runs until Nov. 4 in Las Vegas and has three additional Ringbrothers creations on display. These are based on a 1948 Chevrolet pickup truck, a 1969 Ford Mustang, and a 1972 Chevrolet K5 Blazer.