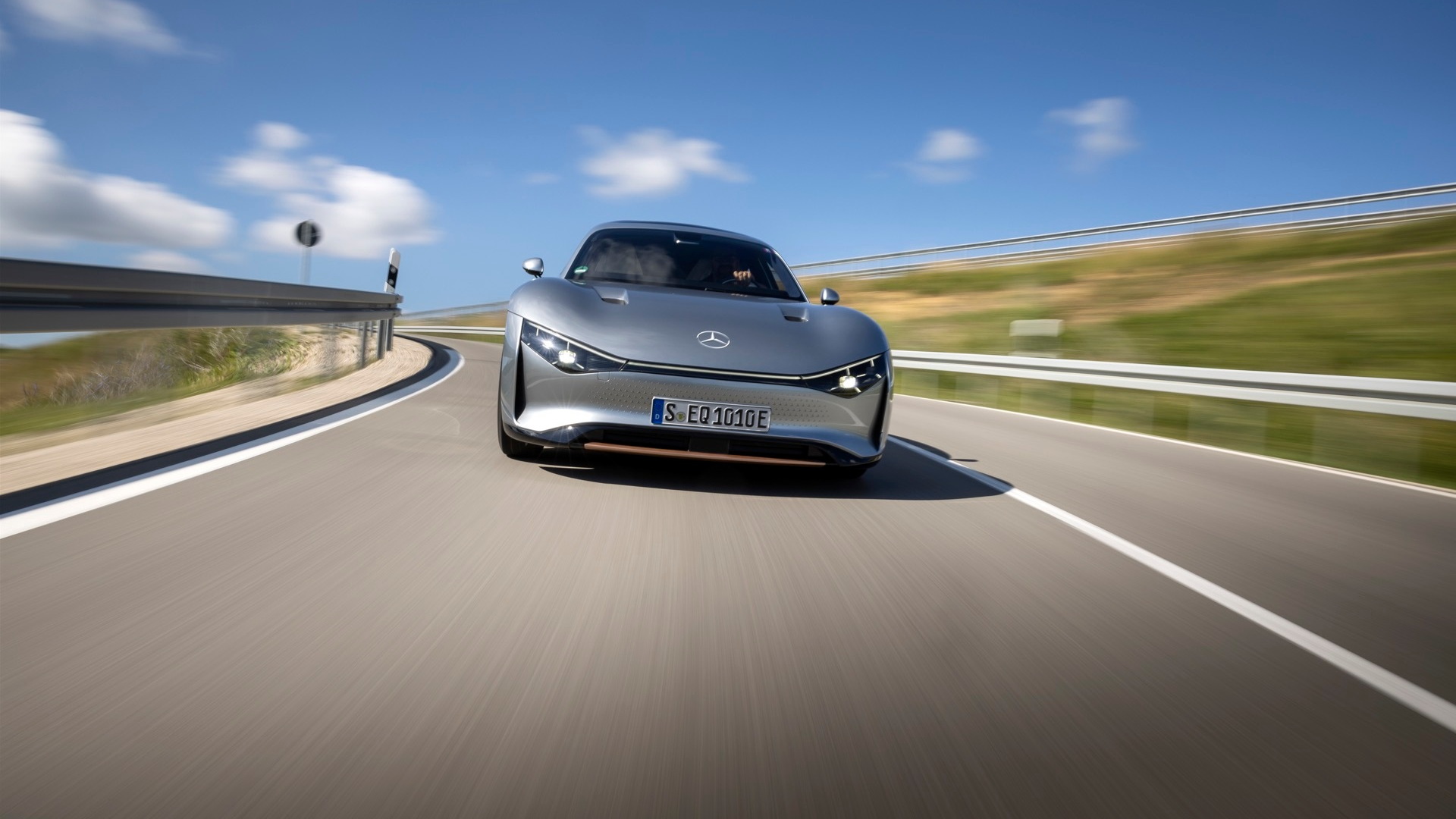 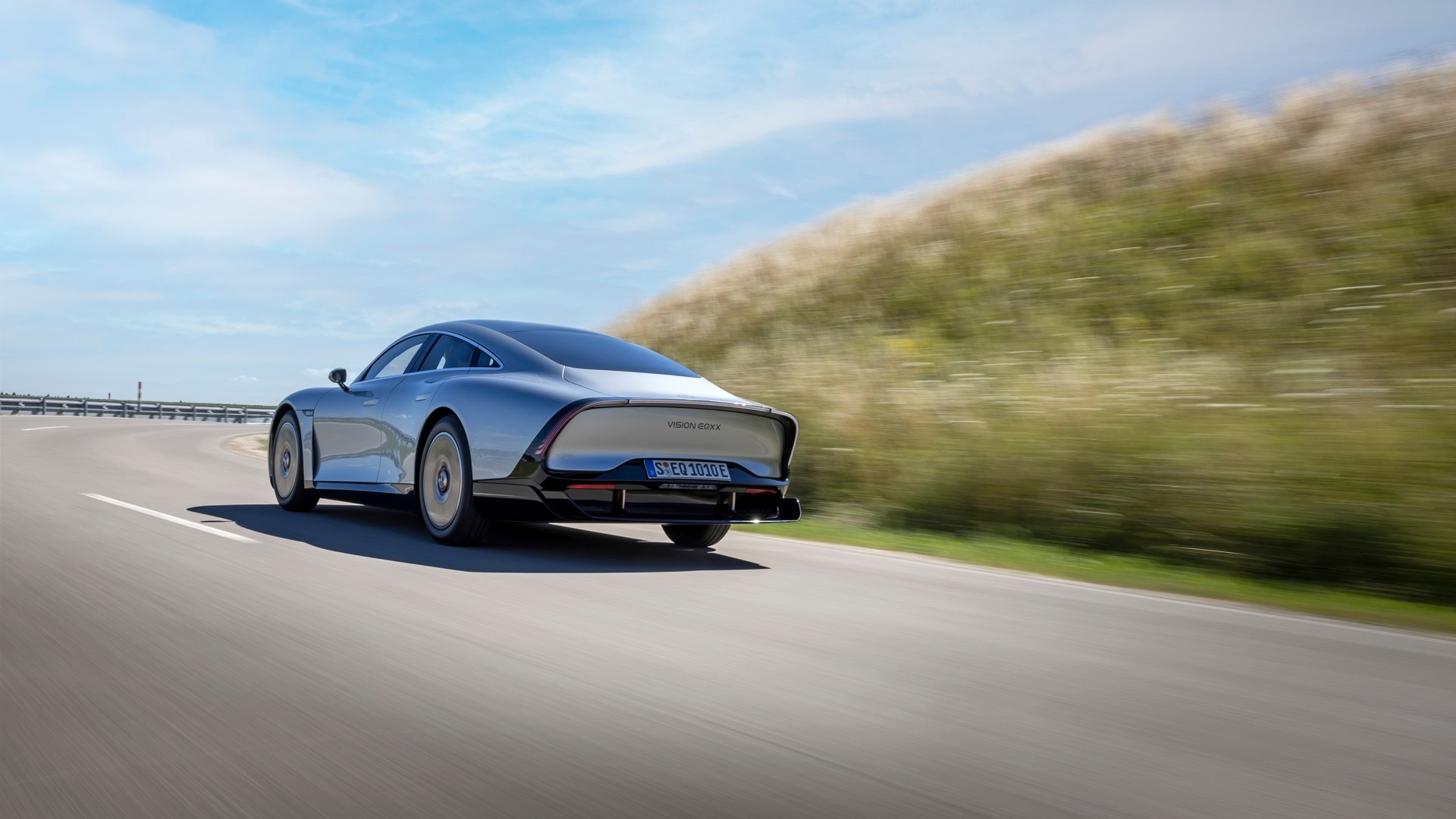 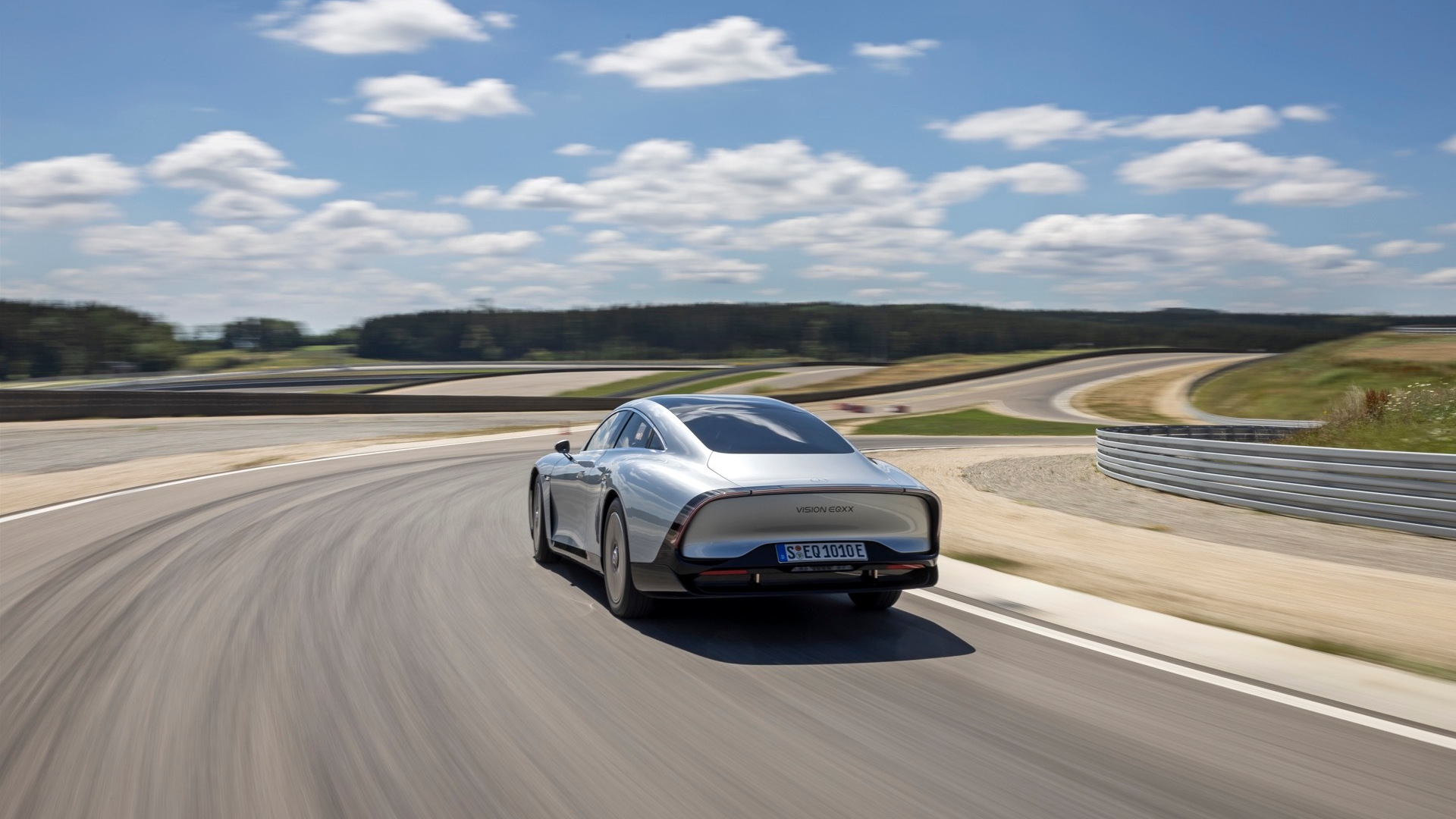 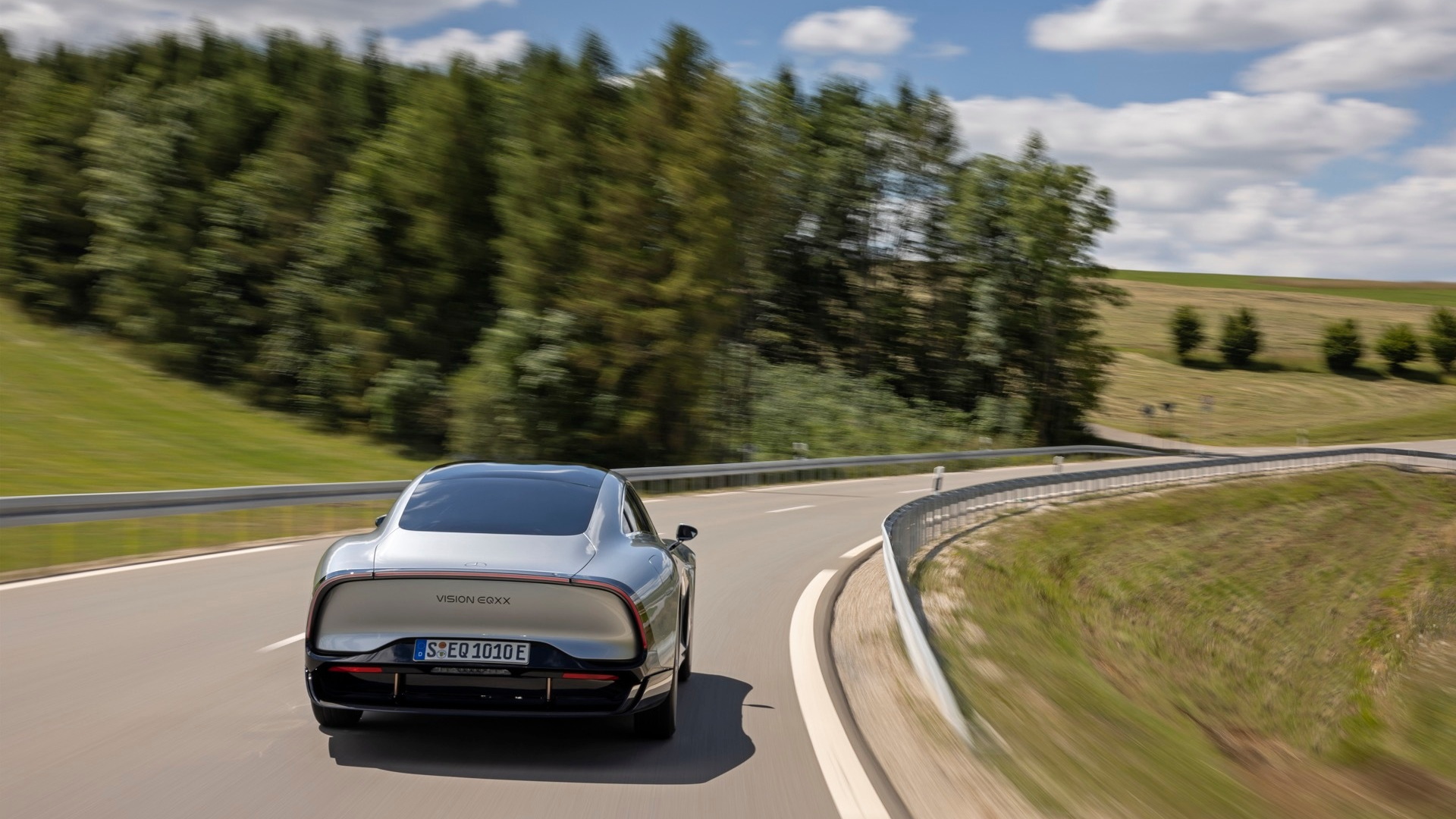 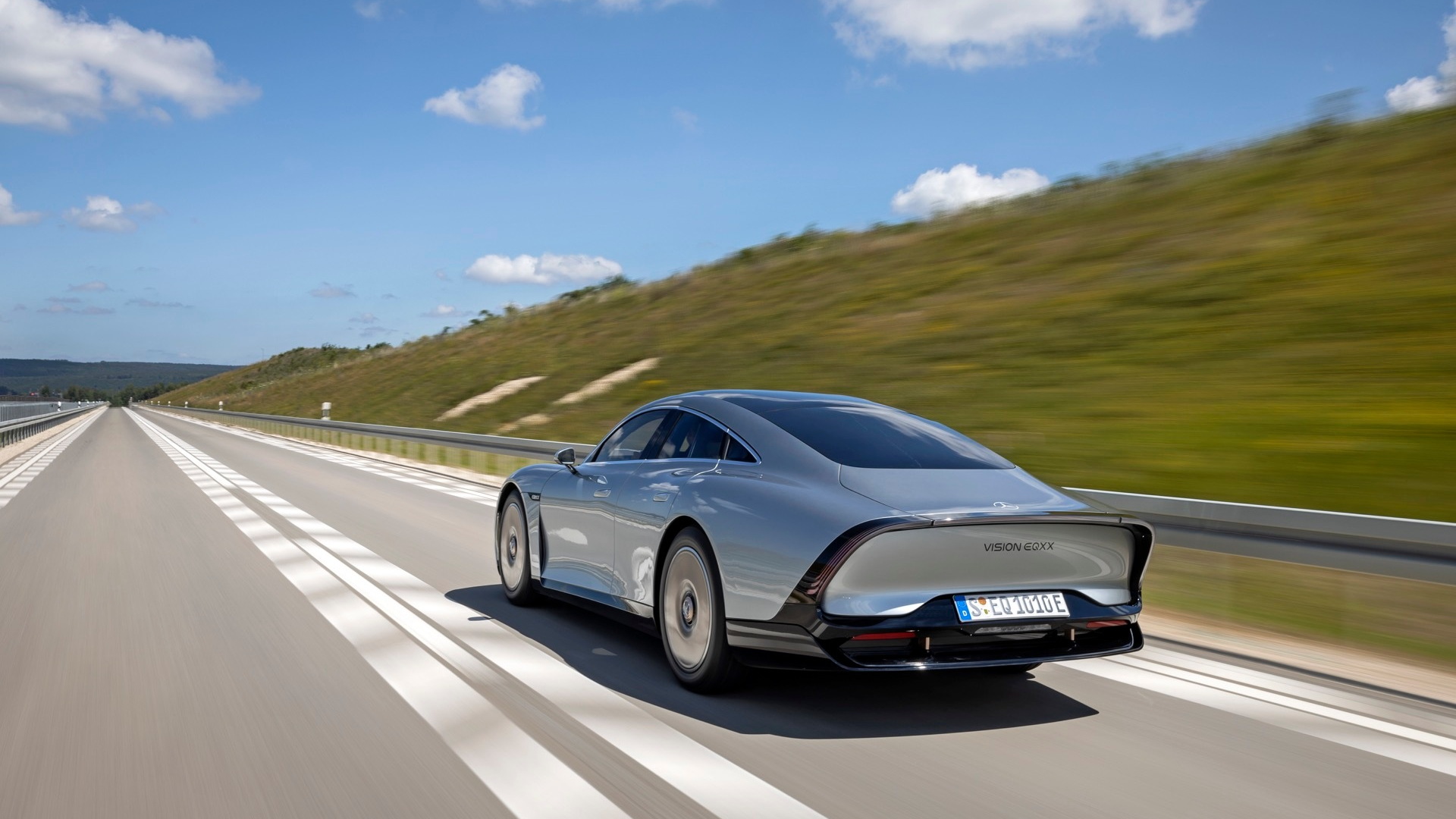 If you follow Formula E—or any kind of motor racing, really—you know that behind the drivers, teams, and cars that win the races, telemetry is what drives everything.

Telemetry channels live data from a race car’s components to map energy in and energy out, velocity, and how driver inputs come into play—among many other potential pieces of information—at various points around a track. The information holds lessons for the driver, diagnostic tools for the car, and helps show the engineering team how to make the car better.

This past week, at Mercedes’ Immendingen proving grounds in Germany’s Black Forest region, I got a chance not just to drive the EQXX but to get a glimpse of the methodology the engineering team has been applying to this car. During my “drive evaluation” my driving-efficiency results were held up against those from an engineering benchmark.

Yes, this is the futuristic Vision EQXX, the most efficient car Mercedes-Benz has ever built. It covered 746 miles on a single charge in April, running from Stuttgart, Germany, to Silverstone, England, with extra distance to spare for some victory laps at the end.

Prior to my run, I got to know the course with a run in a very special Mercedes EQB the team calls Emma—a nod and a wink to MMA, the platform for volume-production compact and mid-size EVs, arriving mid-decade—that all the information from EQXX is being fed into.

Although it simply looks like an EQB on the outside, Emma’s battery, engine, inverter, and cooling system are identical to what’s used in the EQXX, and since there is only one EQXX, Mercedes tests any small changes to the propulsion system here first. A lift of the hatch reveals that the back seat has been removed and replaced by a board full of sensors and components. Yes, things have broken and there have been incidents, but the one-off EQXX and the rest of its special materials and components have been kept safe.

Vision EQXX project manager Malte Sievers notes that this is the only rear-wheel-drive EQB because it had to match the EQXX’s layout. Single-motor production versions of the EQB (for Europe, not due to the U.S.) are front-wheel drive.

In the EQB, Mercedes engineers can stretch the range of the vehicle to more than 700 km (435 miles) with the ~100-kwh battery pack. Sievers says that figure emphasizes the point that just having the best possible electric drivetrain isn’t enough.

The proving grounds are by no means flat or straight. The ribbon of road through a former tank-proving facility that offers a route that’s smoothly surfaced but includes various terrain changes, some roundabouts, and several speed zones ranging from 50 km/h to 100 km/h—with speeds enforced by vehicle monitoring. They watched us.

Then it was time to get into the EQXX. Although technically a concept car, it feels entirely drivable and doesn’t have the brittle show-car feel I’ve noted from concepts in the past. I pulled the door strap made of Biosteel fiber, and the door made of glass-fiber-reinforced plastic and polyamide foam closed with a reassuring thunk. Then I adjusted the seat, upholstered in a mushroom-based vegan leather alternative and got quite comfortable in the EQXX—noteworthy as I’m a long-legged six-foot-six.

Driving the EQXX didn’t require learning a new interface; the switchgear and shifter stalk are in about the same places as in the EQB, while the haptic controls in the steering-wheel hub are merely a simplified new generation of the current layout.

The most radical change was the super-long one-piece 47.5-inch display standing atop the entire low-set dash. Closer to the field of focus, with a more natural contrast level, I found it far easier on the eyes than the EQS’s Hyperscreen.

We set out and heard the whine of the motor and whirr of the drive systems. Mercedes hasn’t put a lot of effort into NVH yet in this one-off—for obvious reasons—but it’s actually quite good. The body feels rigid, and the steering remarkably normal and communicative. The EQXX’s lower body is made of special low-CO2 recycled steel, and the entire rear portion of the EQXX is the largest aluminum structural casting done yet by Mercedes-Benz—with the damper domes cast in—but this futuristic pedigree doesn’t give itself away.

One clue as to the car’s advanced design was the almost complete lack of wind noise. The EQXX cuts through the air with a remarkable 0.17 Cd. Its slim, specially developed Bridgestone Turanza Eco tires on 20-inch forged magnesium wheels don’t generate all that much road noise, either.

Little much else whirred underneath, either. The cabin is kept cool with a modern climate system driven partly from a 12-volt system that’s fed mostly by a rooftop solar panel. A “cooling on demand” approach down below funnels air past the air-cooled battery pack only when necessary, while a liquid-cooling system manages only the power electronics and motor. Mercedes says it can keep pack temperatures not much above ambient temperature, but it hasn’t detailed the cells inside the nearly 100-kwh pack quite yet.

I was encouraged to keep the EQXX’s powertrain within a 20- or 25-kw sweet spot, at which point the propulsion system works at its peak 95% cell-to-wheels efficiency. Over the course, my driving style was different than the benchmark, of course. I recuperated more—1.62 kwh, versus 0.66 kwh for the test driver—suggesting the test driver was simply smoother—and my average speed was slightly higher, at nearly 51 km/h vs 49 km/h. But looking at my results overlaid with theirs didn’t look as bad as I feared.

I didn’t embarrass myself too badly. But while the Mercedes-Benz test driver to beat drove the route with an average consumption of 7.9 kwh/100 km, I used up electrons at a rate of 8.39 kwh/100 km—close but not quite as efficient.

To compare, that’s 7.4 miles per kwh—about double what would be considered excellent efficiency in an EV today, and about 45% better than what I saw in Emma.

The exercise emphasized that in the cars of the future, designing the propulsion system around efficiency isn’t enough—and that the real gains are to be made in focusing on the entire package.

Off the telemetry data record for the moment, I was then allowed to have a little fun—to tap into all of the EQXX’s 180-kw (241 hp). In a vehicle that weighs less than 3,900 lb, it’s plenty, and as I loaded up the G forces in a corner and was surprised how well the skinny tires held on, I was reminded that the center of mass in this model sits very low.

I walked away with a grin and handed off the EQXX to the next person, while my telemetry lay waiting. Even from a short sample behind the wheel, the EQXX sends a strong message: that applying all the technology possible and making the most of the energy available—as shown by racing—doesn’t have to be drudgery. It can be the fun part.

Mercedes-Benz covered travel, accommodation, and some meals for Motor Authority to bring you this firsthand report.