The car was driven by the late Paul Walker in the 2001 film that kicked off the "Fast and Furious" franchise. It was used for interior and exterior shots, according to the listing, and was then repurposed for the character Slap Jack for the sequel "2 Fast 2 Furious," the listing said.

"Fast and Furious" technical advisor Craig Lieberman, whose own Supra formed the basis for the movie car, has explained that many leftover cars from "the Fast and the Furious" were reused for "2 Fast 2 Furious." Johnny Tran's black Honda S2000 from the first movie, and Suki's pink S2000 from the sequel, are the same car, for example. 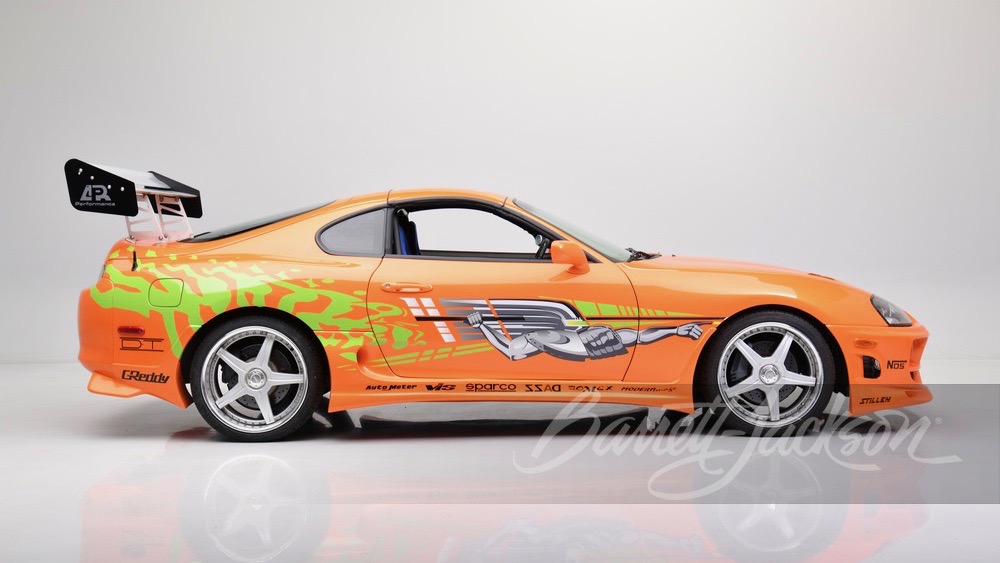 Movie productions typically build multiple copies of each car, and they don't all look as nice as the on-screen version. This Supra looks the part, though, sporting Lamborghini Diablo Candy Orange pearl paint, "Nuclear Gladiator" graphics, a Bomex front spoiler and side skirts, a TRD-style hood, an APR aluminum biplane rear wing, and 19-inch Dazz Motorsport Racing Hart M5 Tuner wheels. Despite the pristine finish, this car car was used for many stunts, or so say the auction announcers in the video above.

This car also left the factory with the 2JZ-GTE twin-turbocharged 3.0-liter inline-6, albeit coupled to a 4-speed automatic transmission, rather than a manual. That's not unusual for movie cars, where ease of use trumps matching what's depicted on screen.

The sale price is a big step up from the $185,000 paid for an authentic "Fast and Furious" Supra in 2015. Two decades after the first movie premiered, the ninth installment, "F9," is scheduled to hit theaters June 25. The "Fast and Furious" saga will finally end in 2024 after two more movies.