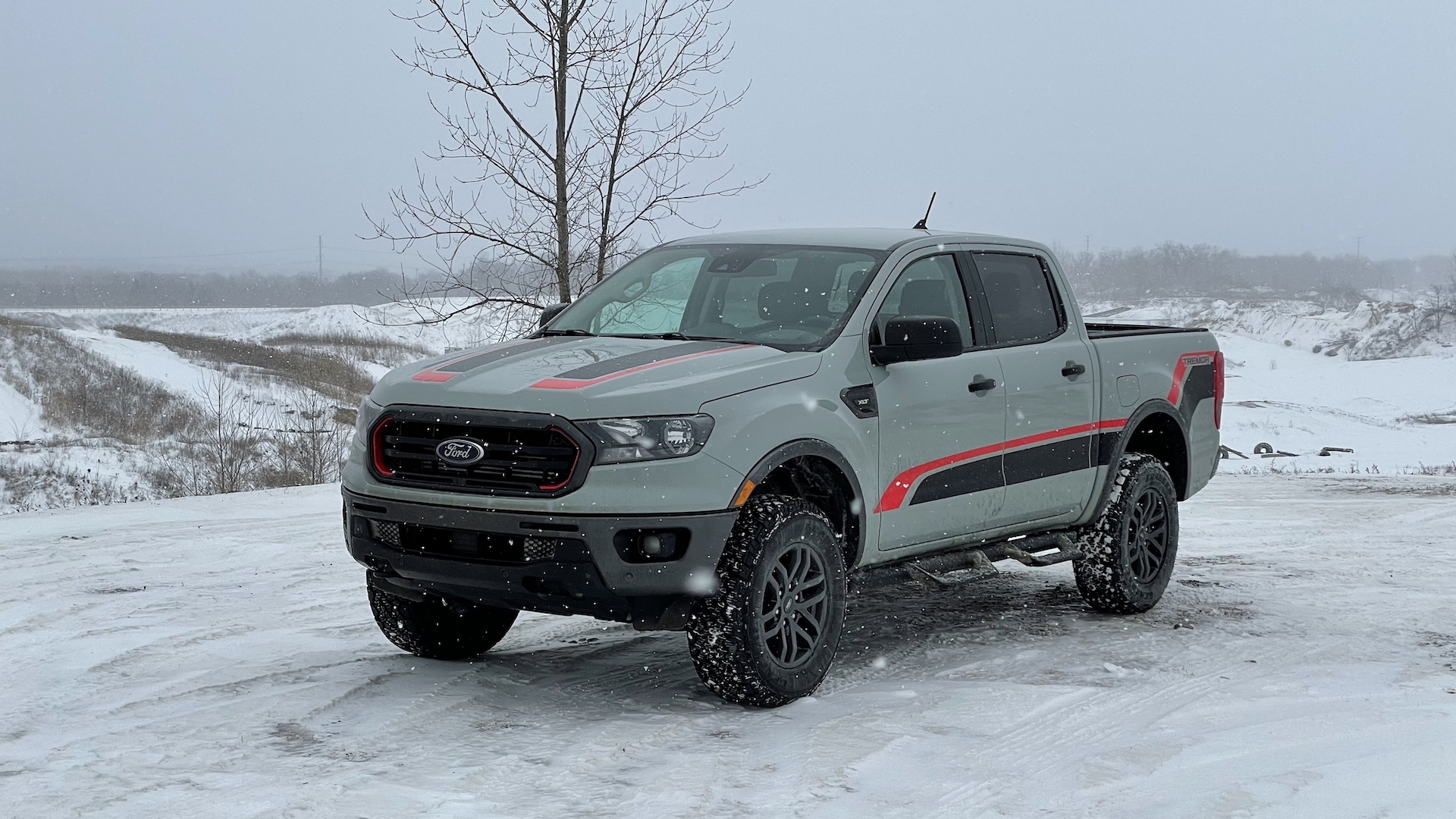 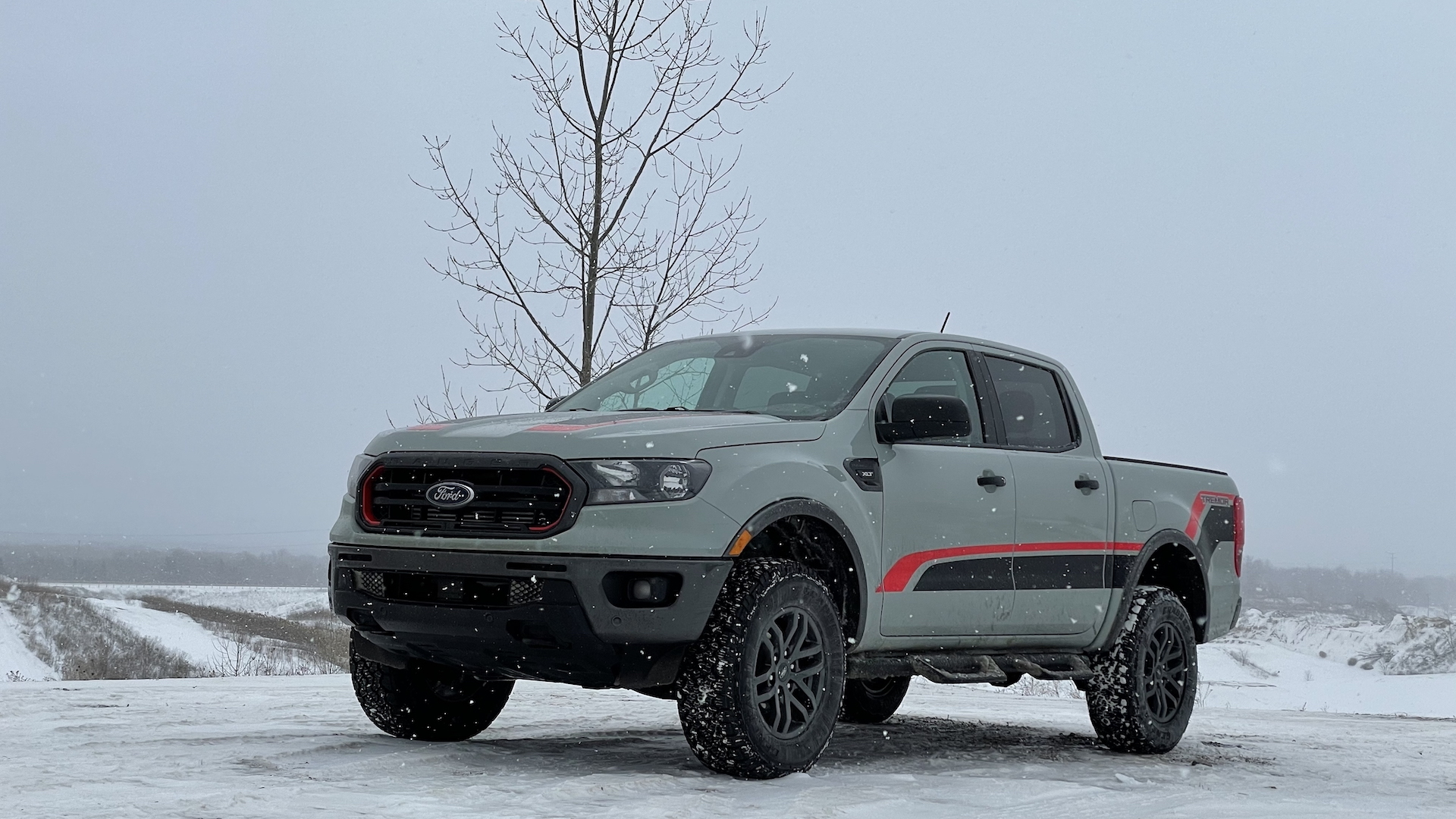 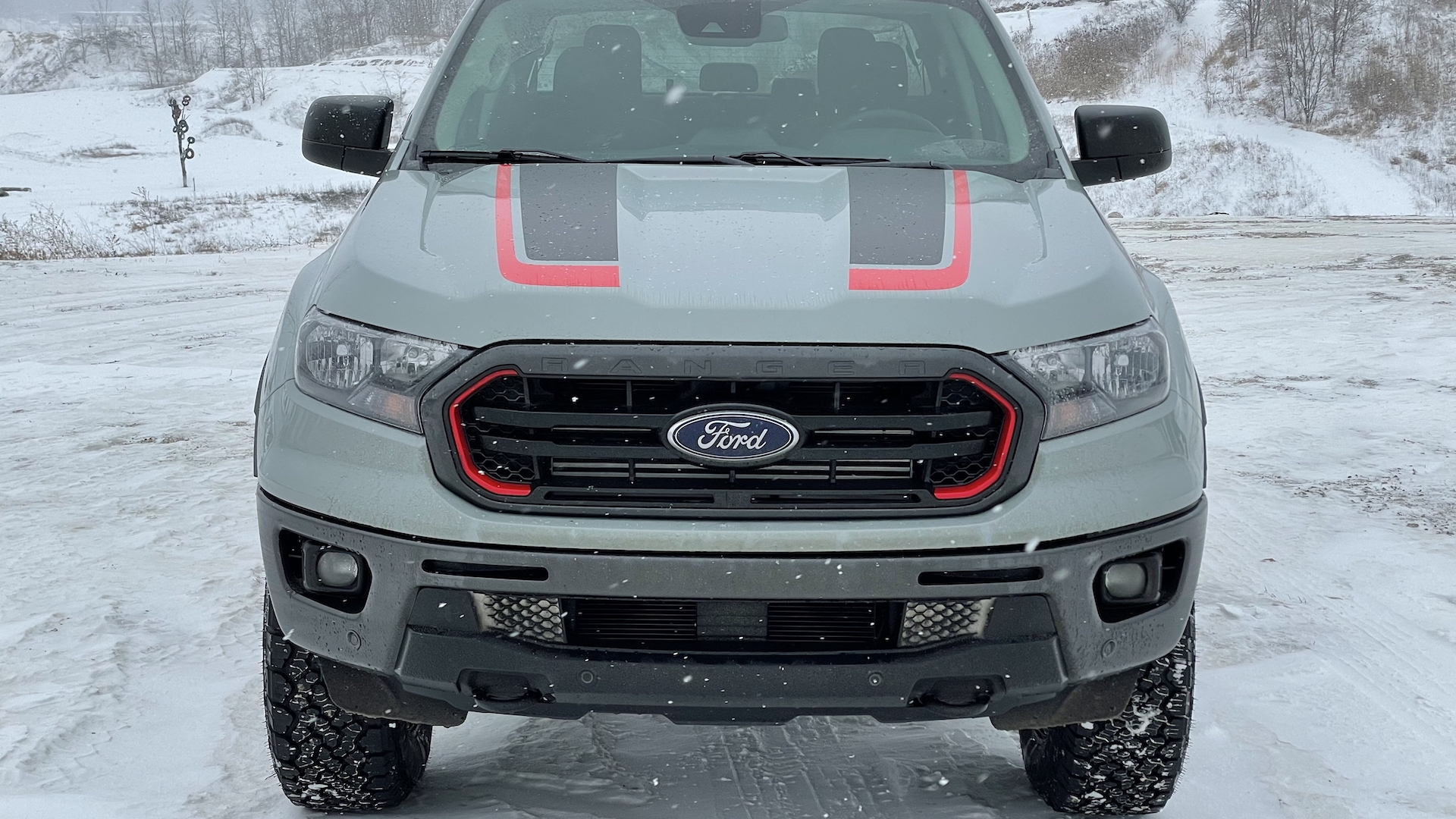 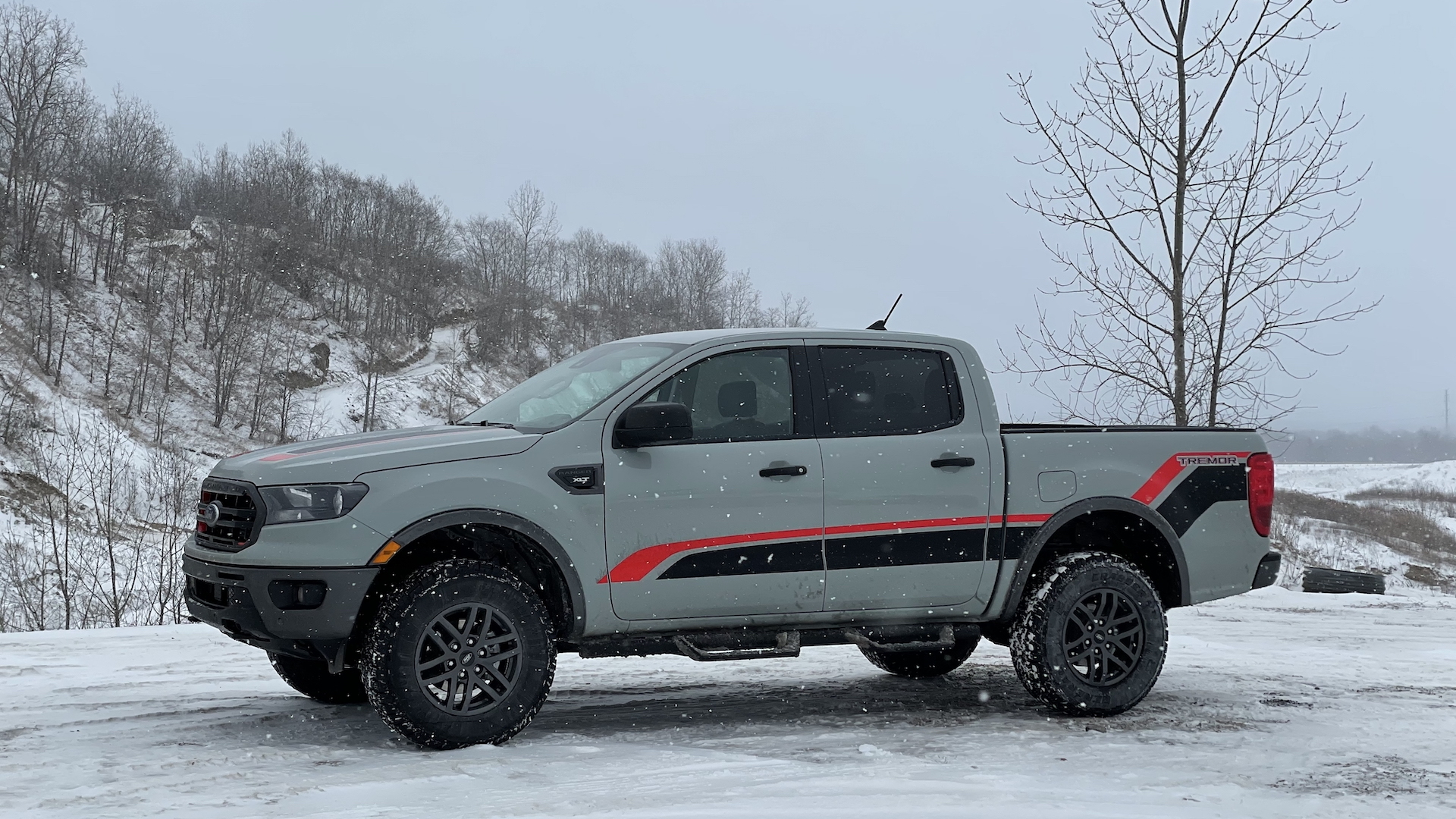 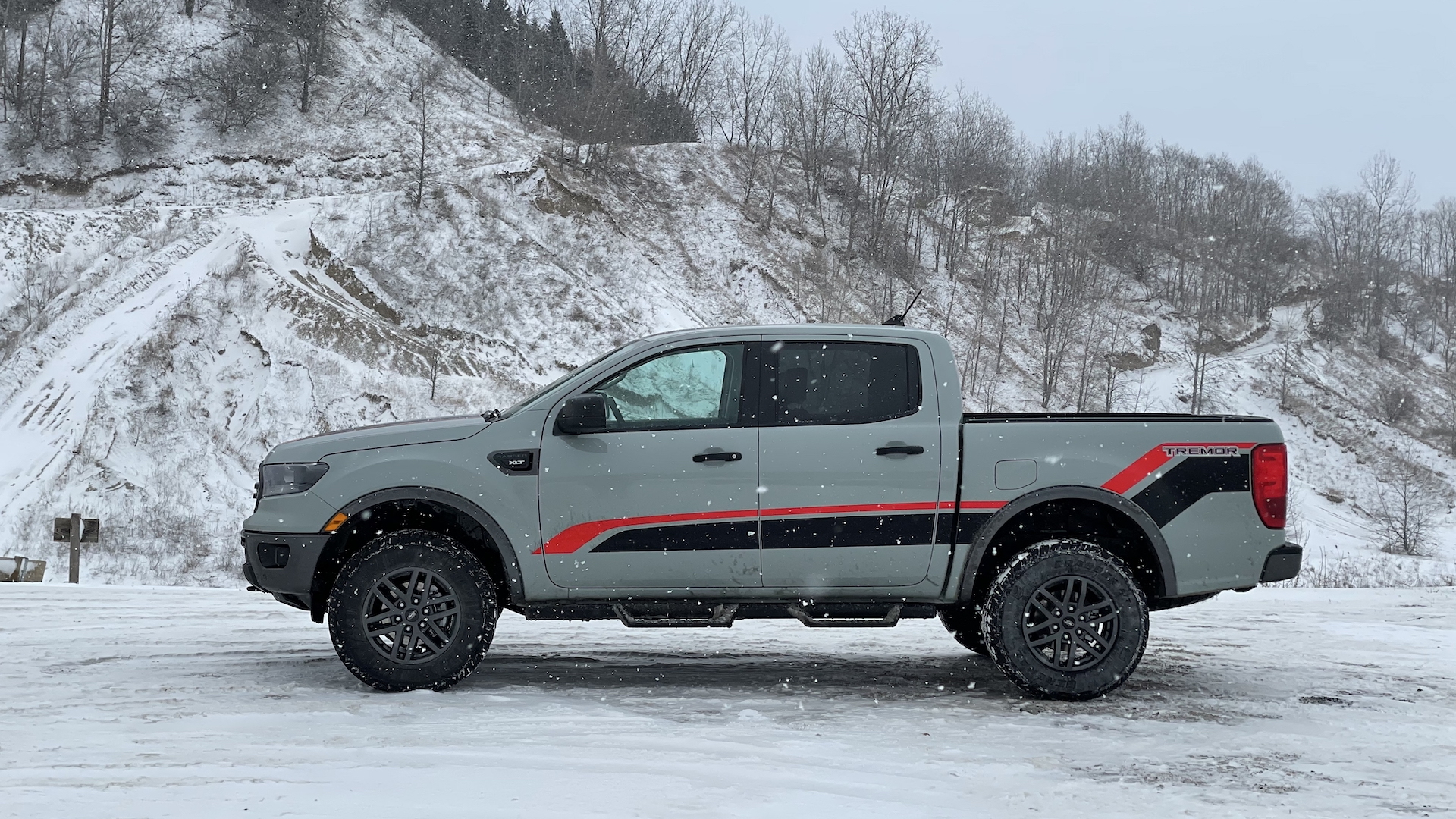 I don’t think Ford planned it this way. It’s an 18-degree February morning and we’re on the tail end of a winter storm that dumped a few inches of ice and snow on the Holly Oaks ORV Park in Holly, Michigan. A layer of ice lurks beneath a layer of snow that makes off-roading in the 2021 Ford Ranger Tremor an especially challenging test for truck and driver alike.

The first truck slides backward down the second steep hill a few times before getting enough speed to make it to the top. I’m next. The first hill is a 15-degree grade and the second varies from 18-20 degrees at its base and crescendos to a 30-degree nail-biter at the top. Worse yet, the trail turns off to the right at the top, so I need enough speed to climb the hill but not so much that I go tumbling down the other side once I get there.

We’re on snow in a gravel pit that used to be a rock quarry, so I opt for the Grass, Gravel, Snow setting, put it in 4Hi and lock the rear axle, then gun it. The LT265/70R17 General Grabber A/TX all-season tires grip the snow well enough to build up 25 mph of momentum in a short distance. The Velocity Blue pickup shoots right up the hill. I let off at the top. These high hills would be challenging in summer. Now they’re treacherous.

The Grabbers maintain enough traction that the descent isn’t a slide, and I punch it again shortly before the bottom for the push up the next hill. The tires dig in again and the truck carries enough momentum to get me to the top, but I still have enough control to make the turn. Success.

Ford engineers put a lot of effort into making this possible. They created the Ranger Tremor package as a sort of half step to a Ranger Raptor. It’s $4,290 worth of suspension and styling goodies that improve the off-road prowess without losing any of the 7,500 pounds of towing and 1,430 pounds of hauling capability.

Most of the changes are mechanical. Ford swaps in a set of Fox monotube dampers with piggyback reserves at the rear. They’re not as aggressive as the Fox internal bypass shocks in the F-150 Raptor, but they were chosen for their high displacement, high velocity, and longer travel. The rears have a more robust monotube design while the shocks from Ford’s base off-road package, FX4, have a twin-tube design. The Fox shocks can handle high shaft speeds, and they have more thermal capacity for the constant motion of off-roading.

The whole suspension is tuned for off-roading, with reduced coil spring rates up front, and softer leaf springs in the rear. The rears change from a single- to a multi-leaf design that allows for about an inch more travel and more ability to withstand off-road pounding. The front stabilizer bar is 1 mm thinner to be more compliant as well. Together, these changes create a softer suspension that can keep in contact with the surface longer and add to on-road comfort.

The more robust suspension comes into play during the next exercise, which amounts to an off-road rallycross course complete with banked turns, short hills, sharp dips, and plenty of snow and ice.

I take a run with the same terrain and powertrain settings I used before and the truck handles it all quite well. Then it dawns on me that Sand mode should act like an off-road Sport mode in these conditions thanks to a more aggressive throttle. I switch to Sand, keep the rear diff locked, and run through the gauntlet again, this time driving like the run is timed.

The greater speeds put more stress on the suspension. The ruts cause sharper impacts and more compression, the approach and departure angles are more stressed, and the tires have to dig harder for traction.

Ford has answers to these issues. The company’s Australian engineers modified the rear jounce bumpers to increase linear travel before the bump stops add to the stiffness of the springs. They set the Ranger Tremor 9.7 inches off the ground, 0.8 inch higher than a Ranger FX4, and added 0.24 inch more front suspension travel and 1.2 inches more travel in the rear. These changes improved the approach, breakover, and departure angles from 28.7, 21.2, and 25.4 degrees for a standard Ranger with 4WD to 30.9, 24.2, and 25.5 degrees, respectively. Finally, the Ranger team chose those General Grappler tires for the balance of on- and off-road capabilities.

As I rail around the course, those changes ensure that the Tremor doesn’t crash against its bump stops, the bash plate doesn’t get bashed, the underside has enough clearance over the dips and swells, and the tires provide as much speed as I’m willing to feed them.

Playing in the snow like this is about as much fun as you can have off-roading, and it’s a good reason to spend the money on the Tremor package. If you haven’t kicked out the tail, charged up and down hills, and bounced over undulations in the snow, you don’t know how much fun winter off-roading can be. It makes the Ranger Tremor a winter fun machine.

On top of that, Tremor includes some exterior cues, like side hoop steps, two rear tow hooks, and Magnetic paint on the grille (with red accents), bumpers, wheels, and 1-inch wider wheel lip moldings. Buyers can also choose optional body side and tailgate graphics that seem like they were born in the 1990s.

My drive home in the Ranger Tremor isn’t nearly as hairy as my trip to Holly Oaks in the snowstorm. On freeways packed with snow and ice, those General Grapplers prove knobby enough to provide excellent snow traction, but they don’t howl at speed like you might expect.

My 14-hour drive there and back again (we’re dedicated here at Motor Authority) also gives me the chance to notice the Tremor’s interior enhancements. It features black interior trim that’s simply dark plastic, all-weather floor mats that get a workout, and cloth Ebony seats (leather in the Lariat) with Miko suede and “Tremor” stitching. The seats are appealing to the eye, but too flat to appeal to the back. Ford also adds a 6-switch auxiliary power plate so owners can add accessories like lights, a winch, a compressor, or a refrigeration unit. My fear that I’ll need a winch during the storm goes, thankfully, unrealized.

For that money, buyers get an off-road Ranger with the chops to conquer steep, snowy hills and take on the likes of the Chevrolet Colorado ZR2 and Toyota Tacoma TRD Pro, both of which costs thousands more. It might be a half step toward a Ranger Raptor, but the Tremor package is a fun off-roader in its own right.

Ford provided a 2021 Ranger Tremor loaner and a night in a hotel for Internet Brands Automotive to bring you this first-hand report. The weather was nature's bright idea.