Jay Leno bought his 1993 Dodge Viper new, and has kept it in good condition over the ensuing 27 years. Featured on a recent episode of his online series Jay Leno's Garage, it's a very original example of a first-gen Viper.

Unveiled as a concept car at the 1989 North American International Auto Show in Detroit, the Viper marked a resurgence for Chrysler after the depressing (but profitable) K-Cars and minivans. It was conceived as a modern version of the Shelby Cobra. While Carroll Shelby wasn't very involved in development, he gave the Viper his blessing and helped market the car, pacing the 1991 Indianapolis 500 in a pre-production model.

First-generation Vipers like Leno's car were remarkably basic. The roof was a flimsy canvas panel, the side windows were vinyl instead of glass, and there were no outside door handles. The Viper also lacked driver aids like anti-lock brakes and traction control, which were just coming into mainstream use at the time. Later generations would get more creature comforts, while federal regulations necessitated more safety features. 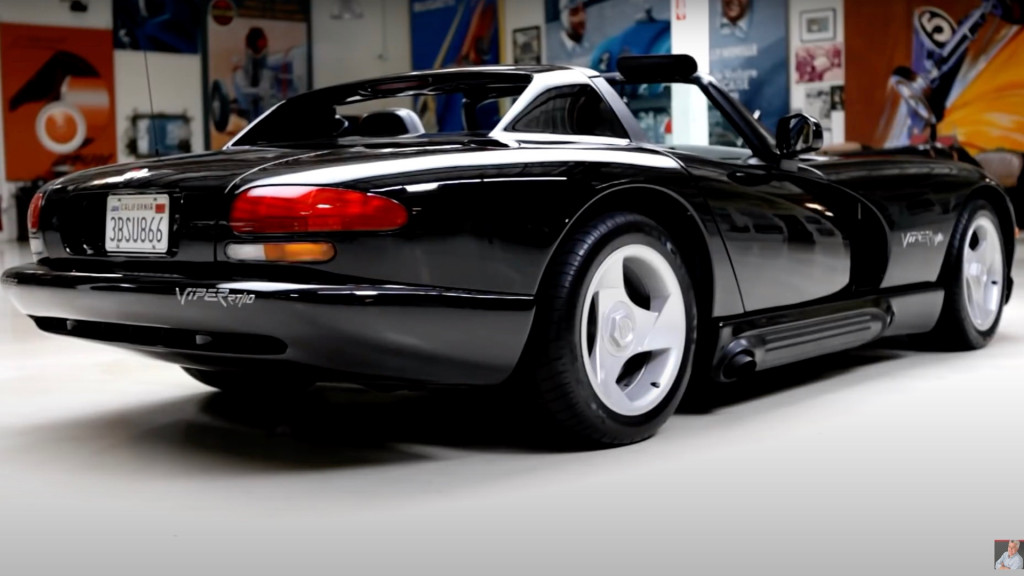 The first-generation Viper was powered by an 8.0-liter V-10 derived from a Chrysler truck engine. While it weighed more than 700 pounds (Shelby reportedly advocated for a lighter V-8), the V-10 produced an impressive (for the time) 400 horsepower. Lamborghini—which was owned by Chrysler at the time—recast the original truck engine's cast-iron block and heads in aluminum.

While some cars were delivered during 1992, Leno's car was built the following year—the first full year of production. At the time, Leno said that he thought he had ordered the first black Viper, only to get a call from Tom Gale—the car's designer—saying he had ordered the first black car. Leno's car wears its original paint, and has about 10,000 miles on the odometer. It has some mechanical modifications, though, including a Hennessey intake and exhaust and 3.77:1 rear end.

Viper production ended with the 2017 model year. Fiat Chrysler Automobiles blamed impending safety regulations, but sales had also slowed, with just 630 cars shifted in 2016. It seems unlikely that the automaker, which is merging with France's PSA Group to become Stellantis, will bring back the Viper. So watch the full video for a look back at the car's early days.