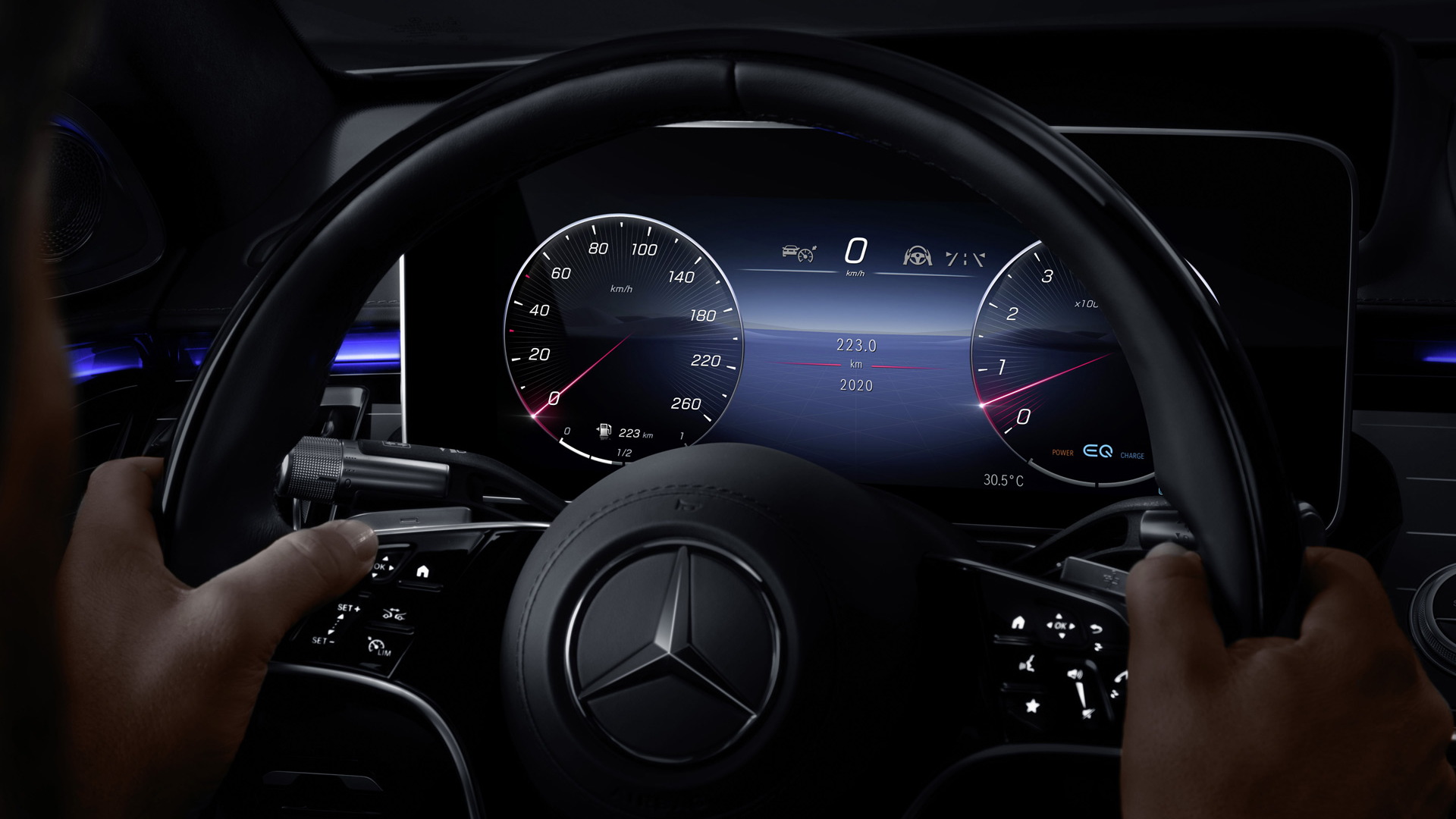 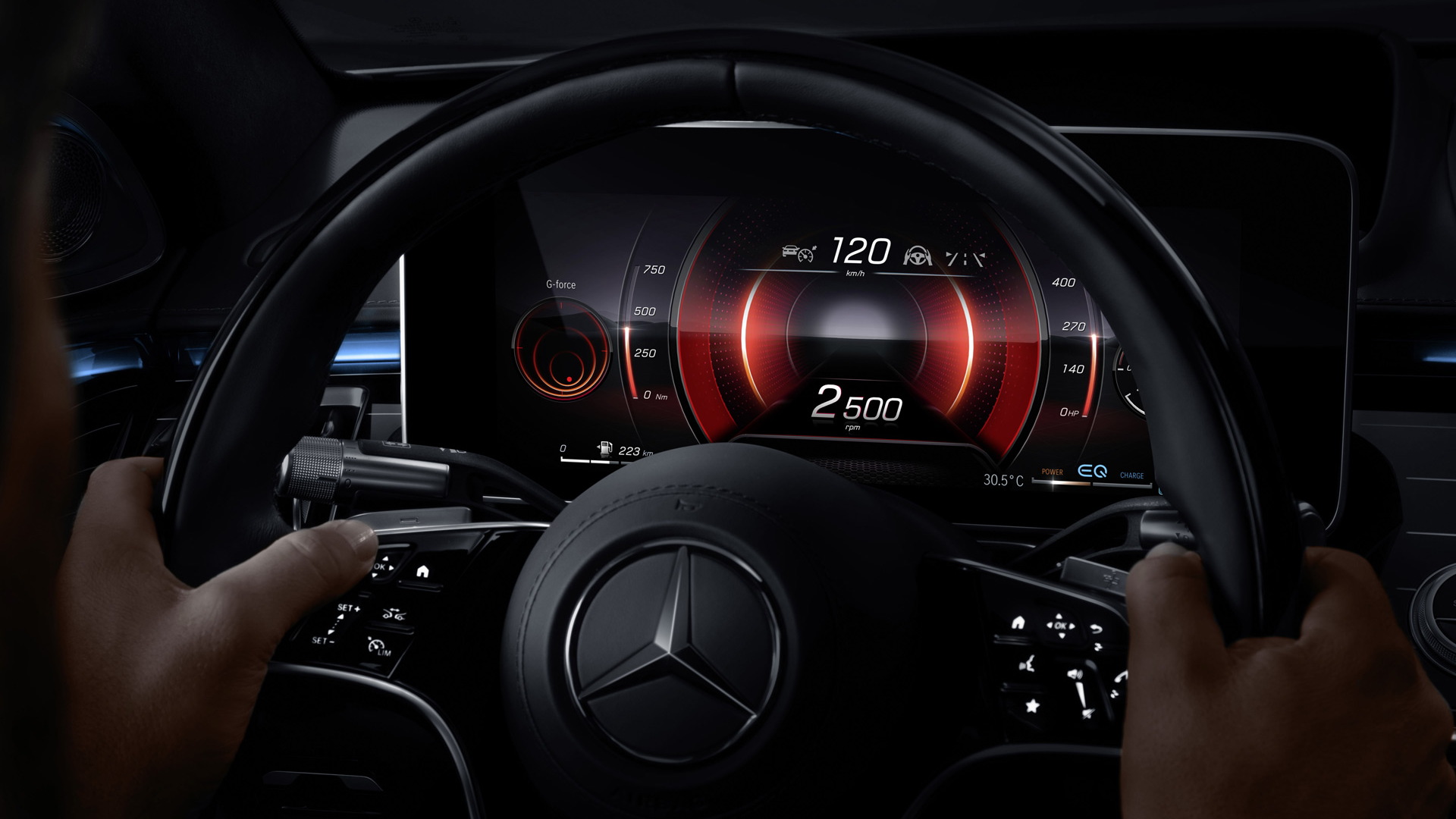 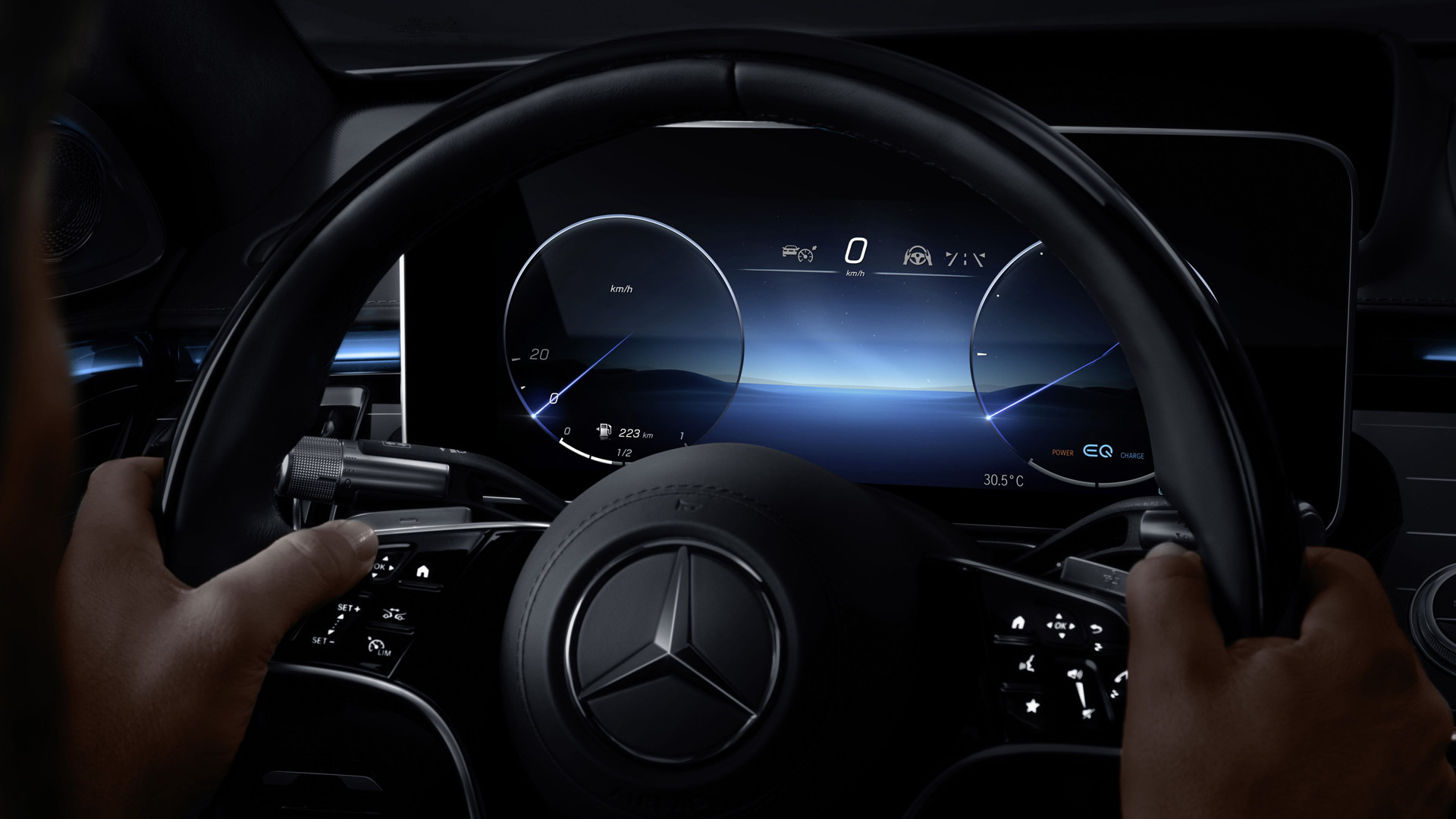 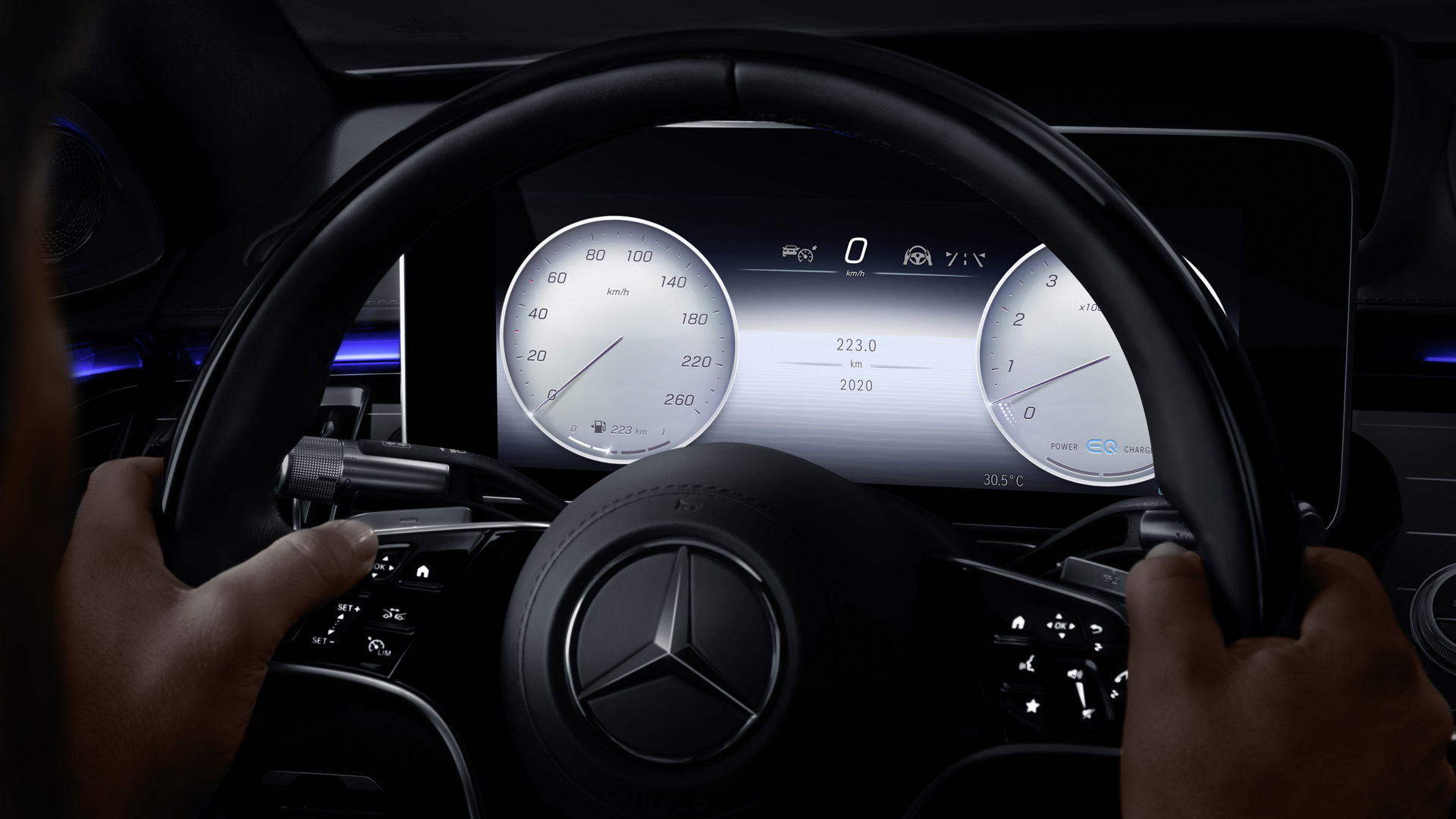 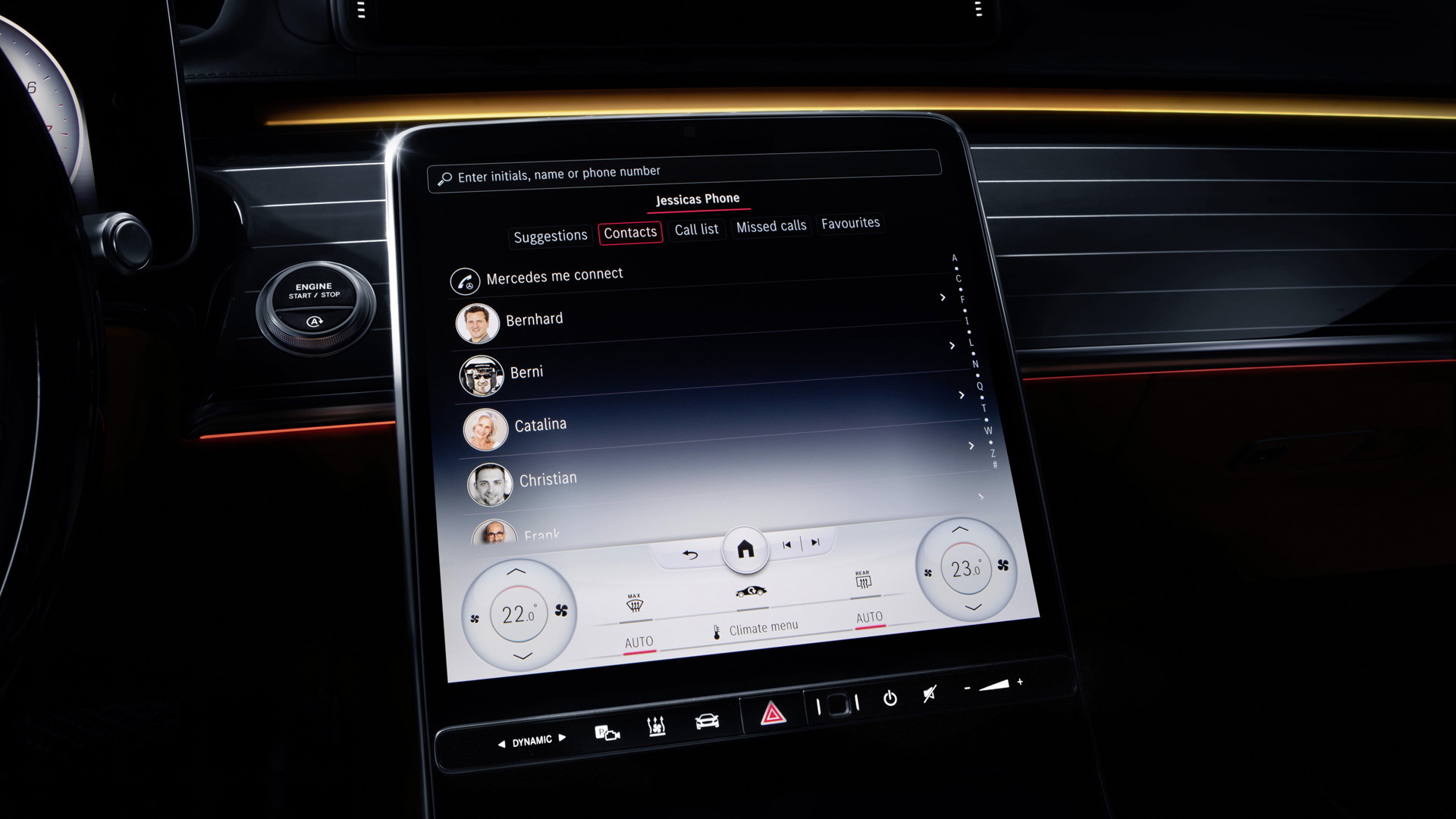 A new generation of the Mercedes-Benz S-Class is set for a reveal in September, and over the coming weeks Mercedes plans to drip-feed information on its new flagship, starting with details on the car's user interface.

The new interface is powered by a second-generation version of the Mercedes-Benz User Experience (MBUX) system that was rolled out a couple of years back. For the latest version of MBUX, both the software and hardware have been updated.

It starts with the 12.3-inch digital instrument cluster which at the touch of a button can provide a 3D view. It works by a special pixel structure and controllable aperture grille that enable the driver's left and right eyes to see different pixels of the display at the same time. A camera watches the driver's eyes and adjusts the system so that it functions over a wide range of movement of the driver's head.

Buyers will also have the choice of two head-up displays. One of these is a large version that's able to generate augmented reality displays. This is particularly handy for navigation, for example by virtually projecting upcoming turn instructions onto the road ahead. The system is also handy for traffic sign information and various driver-assist features such as collision warning.

The infotainment screen is a 12.8-inch screen with portrait mounting, haptic feedback, and OLED technology. It contains controls for most of the features of the cabin via its multiple menus, and it also can be used with voice activation which now supports 27 languages. The latest version of Mercedes' voice activation system also no longer requires a “Hey Mercedes” at the start of key instructions, like answering a phone call or bringing up the navigation map. The system can also inform where the car's first-aid kit is located, or how to connect a smartphone, and it also works from every seat in the cabin.

Certain gestures can also be used to control various functions in the cabin. For example, cameras can notice if the driver looks over his or her shoulder toward the rear window, in which case the rear sunblind will be automatically opened. Or if the driver is looking for something in the front passenger seat in the dark, a light will be automatically switched on. The system is even smart enough to detect if an occupant wants to leave the vehicle, at which point the blind spot is checked and a warning light flashed if an object is approaching.

The latest version of MBUX also has the ability to store user profiles—up to seven—for various preferences such as favorite radio stations. These profiles are stored in Mercedes' own Mercedes Me cloud network and can be used in any Mercedes model with the latest MBUX system.

With the latest S-Class, Mercedes is also increasing the emphasis on those sitting in the rear, to the point that they will now have the same level of control over the infotainment and comfort as those sitting up front. In line with this, buyers will be able to add up to three touchscreens in the rear.

Mercedes is still out testing the new S-Class, in regular and ultra-luxurious Maybach guises. The car's availability in the United States is yet to be announced, but we should see it introduced here as a 2021 model.

Future details to be announced in the coming weeks will cover the safety and comfort features of the new S-Class, as well as new luxury items. Stay tuned.