Jaguar Land Rover will start testing a Land Rover Defender prototype powered by a hydrogen-electric powertrain in late 2021, the automaker said on Tuesday.

The move is purely about developing and evaluating the technology and doesn't necessarily indicate that a hydrogen-fueled Jaguar or Land Rover is coming to showrooms anytime soon, though the automaker has hinted in the past that hydrogen has a role to play in its move to have a zero-emission option across its lineup by 2030, and only zero-emission vehicles in its lineup by 2036.

Jaguar Land Rover is developing a hydrogen-electric powertrain that relies on a fuel-cell to combine hydrogen and oxygen in a process that generates electricity and only leaves water as a byproduct. The generated electricity is used to power electric motors driving the wheels, as well as charge a relatively small battery that can also help power the electric motors during high-load situations.

Compared to simpler battery-electric cars, hydrogen-electric cars have minimal loss of range in extreme temperatures. They also have refueling times similar to gas and diesel cars, though actually finding a fuel station that supplies hydrogen is largely impossible in the United States (and most other countries) at present outside of a few spots in California and Hawaii. 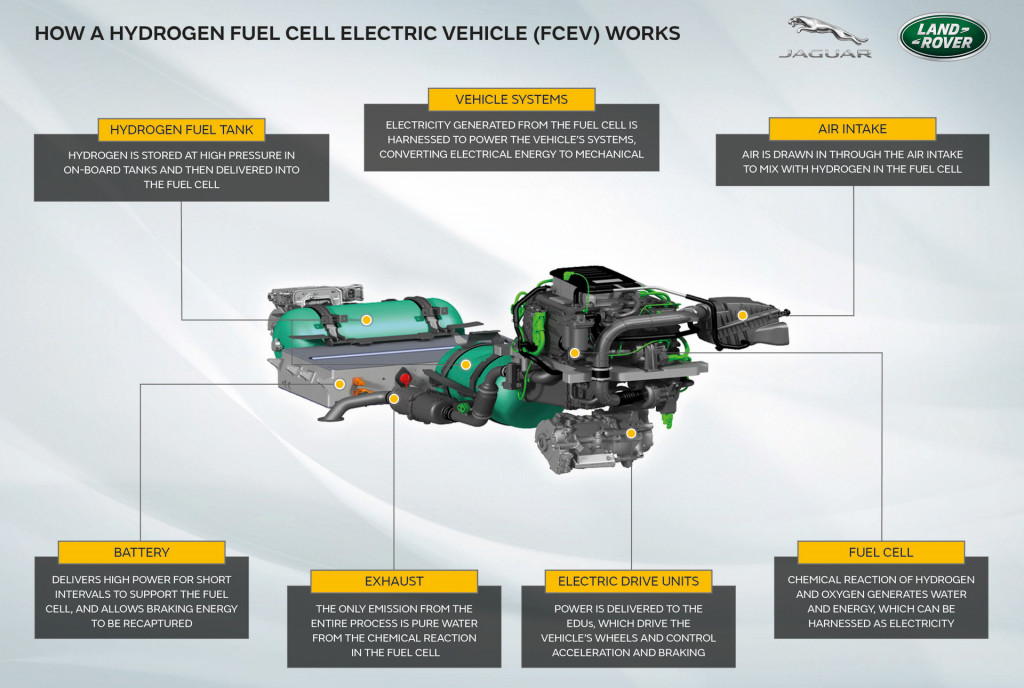 The hydrogen-electric Defender prototype is part of the United Kingdom government-funded Project ZEUS (zero and low-emission vehicles in urban society) stimulus program for the automotive industry focused on green technology, which was first announced in mid-2020.

To date, Jaguar Land Rover has primarily focused on plug-in hybrid and battery-electric vehicles when it comes to alternative powertrains. The automaker is beginning to experiment with fuel cells at a time when some rivals are moving away from the technology.

Mercedes-Benz said last year that it would end fuel-cell development for passenger cars, shifting to commercial vehicle applications instead. BMW plans to launch a production version of the X5-based i Hydrogen Next concept in 2022, but it will be built in low volumes. BMW has said a mass-market hydrogen model wouldn't be ready until the second half of the decade at the earliest, and then only if market conditions were favorable.

Only Honda, Hyundai and Toyota currently sell hydrogen-electric cars in the U.S., though sales are limited due to the aforementioned lack of fueling infrastructure.