Most pickup trucks follow a familiar template: engine in the front, bed in the back. That isn't the case with this 1961 Chevrolet Corvair pickup, featured on a recent episode of "Jay Leno's Garage."

This truck is one of several variants of the rear-engine, air-cooled Corvair, conceived by General Motors to meet growing demand for smaller, more affordable cars. Chevy offered the Corvair in nearly every body style, encompassing sedan, coupe, convertible, station wagon, and van variants, alongside the pickup truck. Yenko even created a performance version of the Corvair coupe, called the Stinger.

Today, the Corvair is probably best known for being targeted by consumer advocate Ralph Nader in his 1965 book "Unsafe At Any Speed," which held up the car's swing-axle rear suspension as an example of automakers putting cost cutting ahead of safety. Fallout from the book, and Nader's congressional testimony, laid the groundwork for today's automotive safety regulations. Chevy launched an updated Corvair with redesigned suspension, and continued selling the model until 1969. 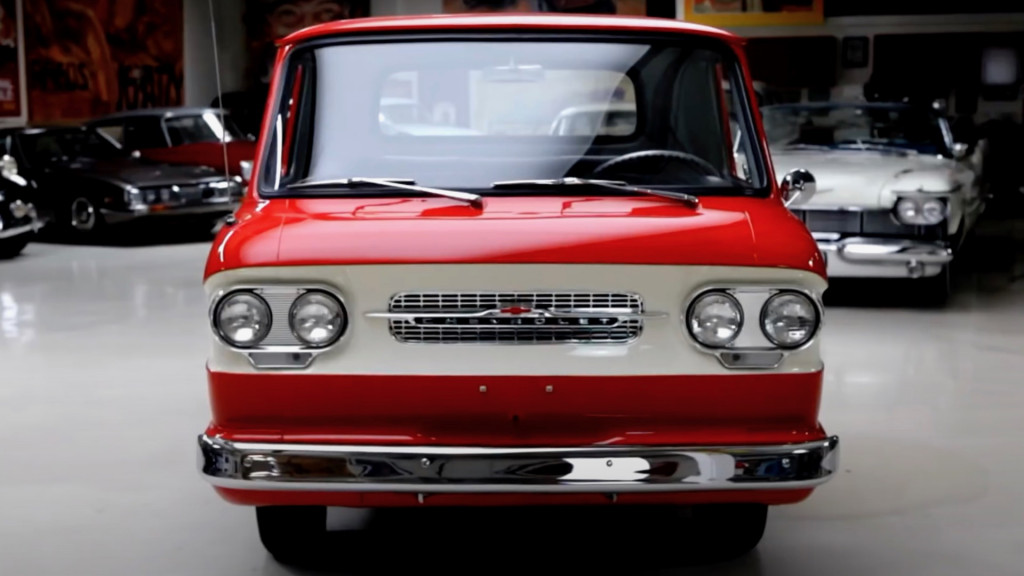 In the pickup truck, the Corvair platform allowed for a van-like cab-forward configuration. However, unlike the similar Ford Econoline and Dodge A100 pickups, the driver and passenger didn't have to share space with an engine. In the Corvair, the engine is located under the bed at the rear of the chassis. That 145-cubic inch flat-6 produces 80 horsepower and 128 pound-feet of torque, which is sent to the rear wheels through a 4-speed manual transmission.

The unibody truck rides on a 95-inch wheelbase, compared to 108 inches for other Corvair variants. As for this particular Corvair truck, it is a ramp side model, which had a ramp on one side of the bed in addition to a traditional tailgate. The truck can carry 1,500 pounds of cargo, according to Leno, but it doesn't have a flat bed floor, limiting utility.

Leno said he found this truck less than a mile from his Santa Barbara-area shop. It was in rough shape, but that meant it only cost $600. Watch the video to see it in its fully-restored glory.