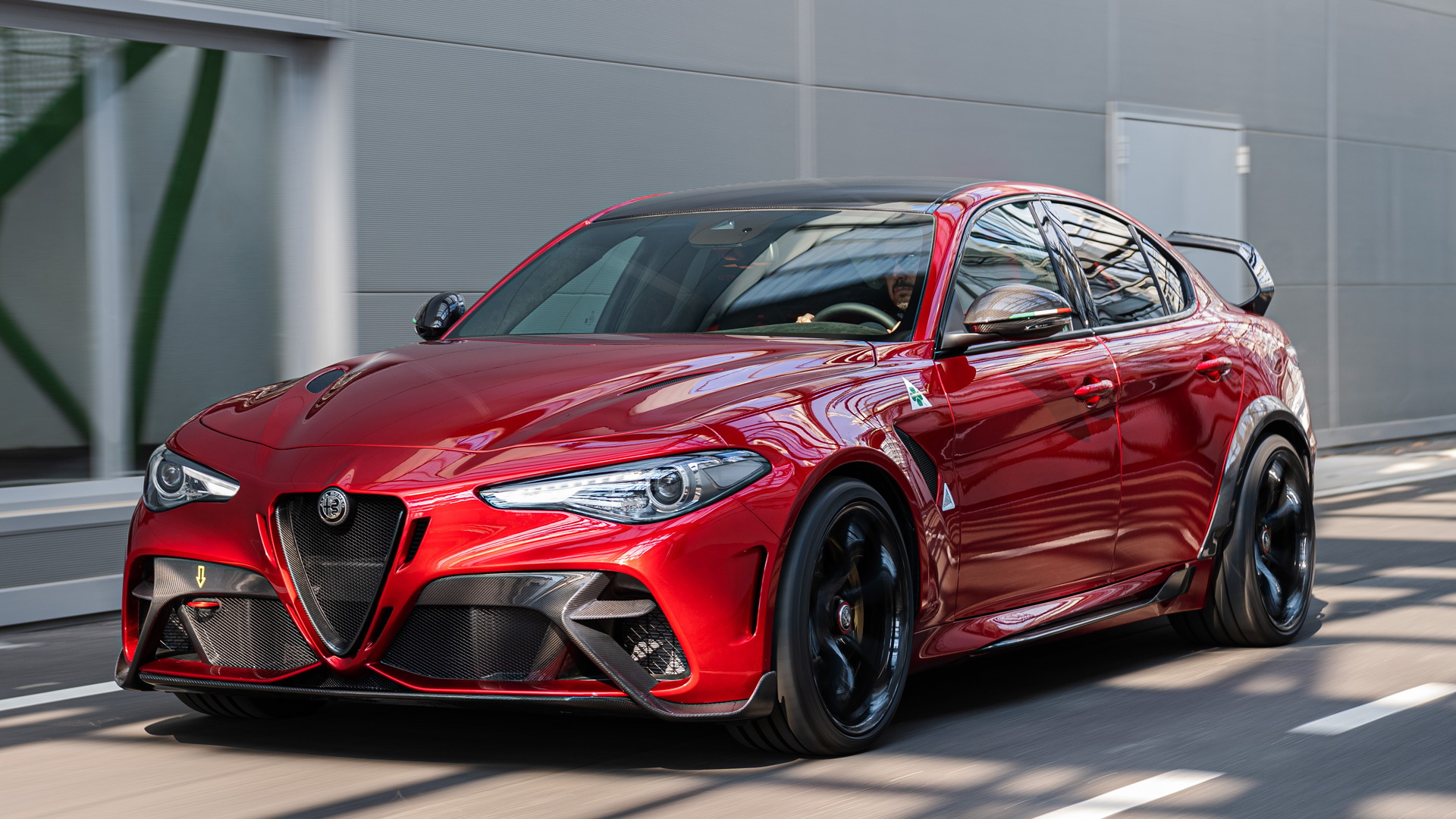 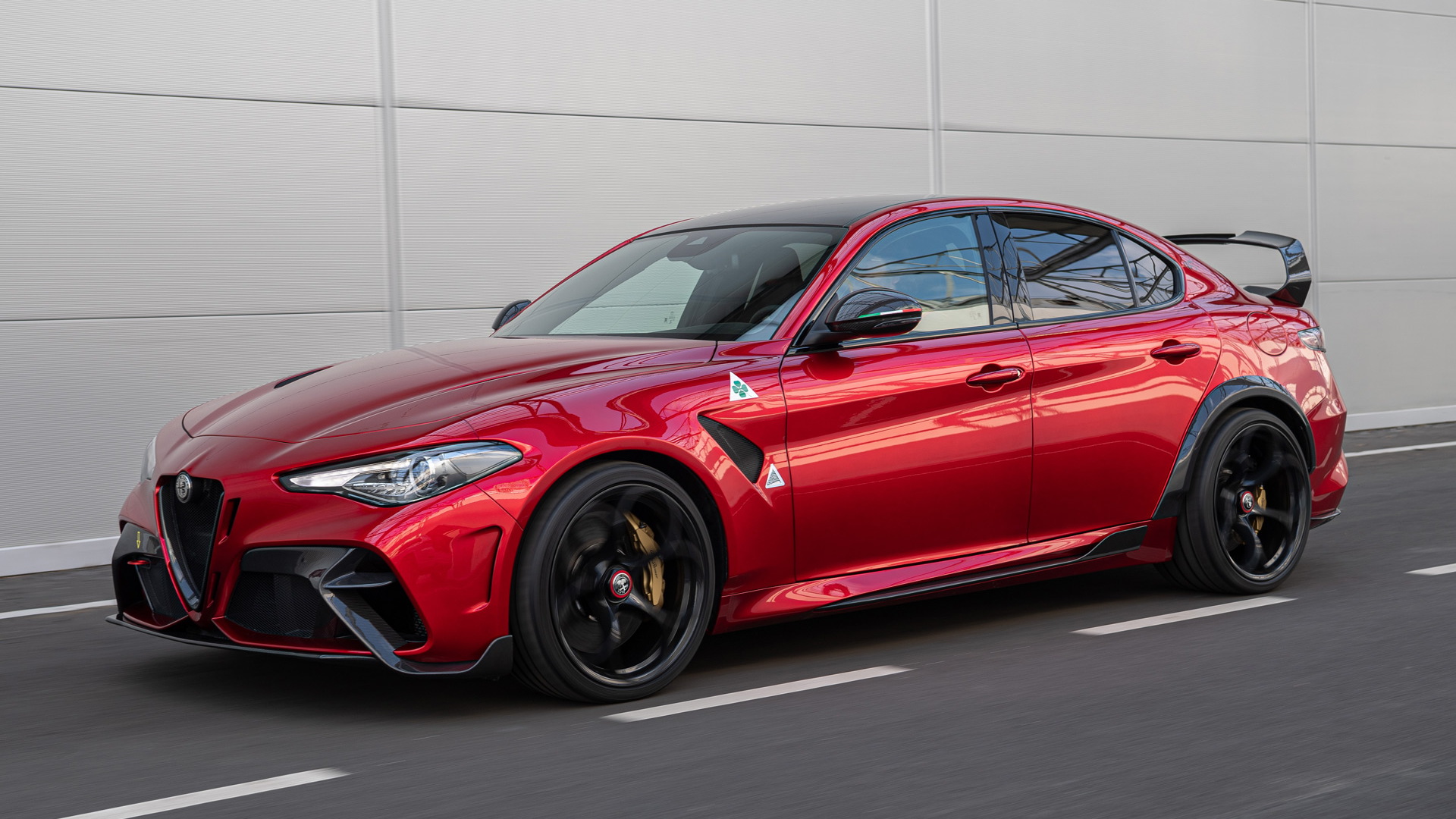 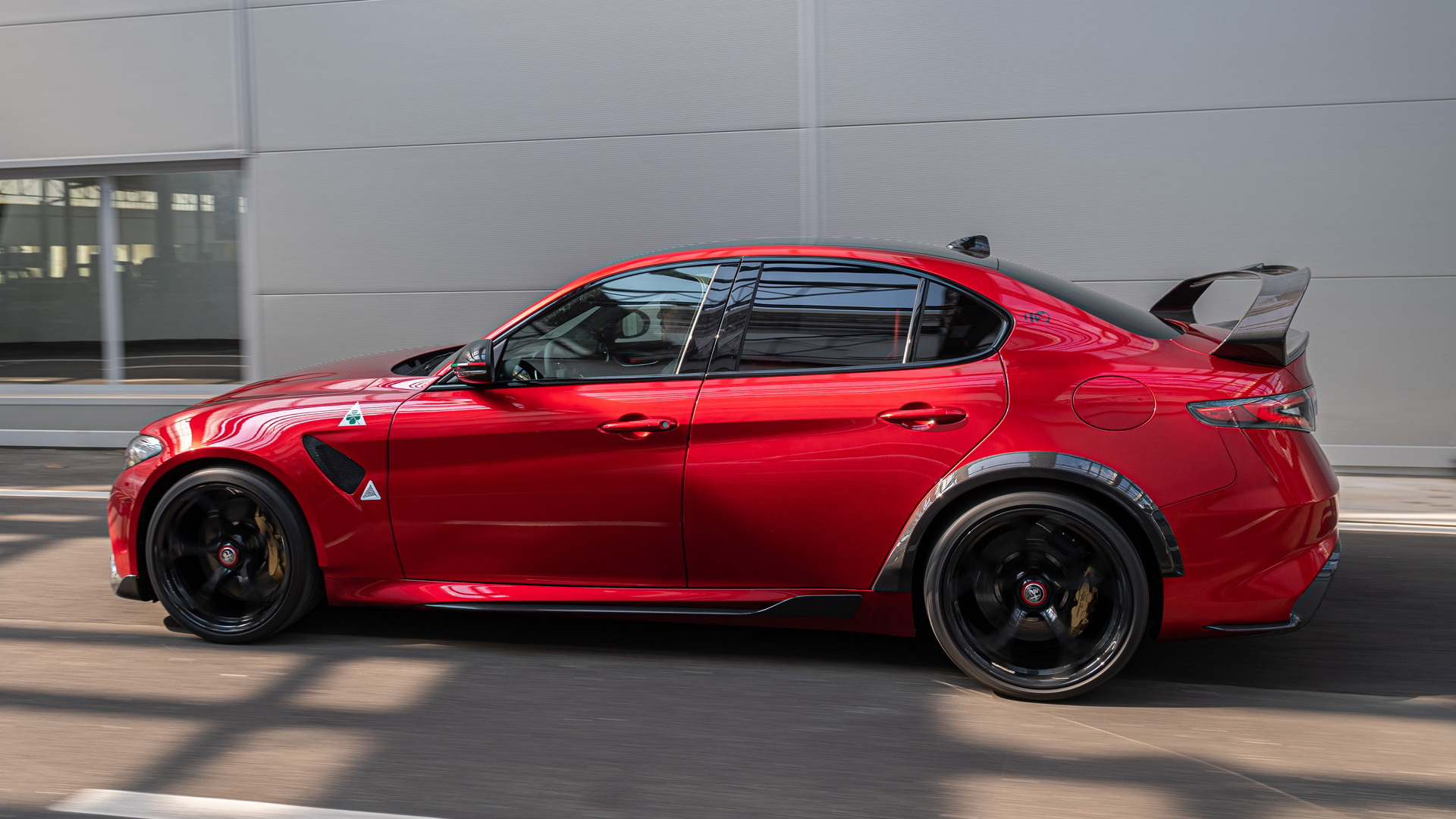 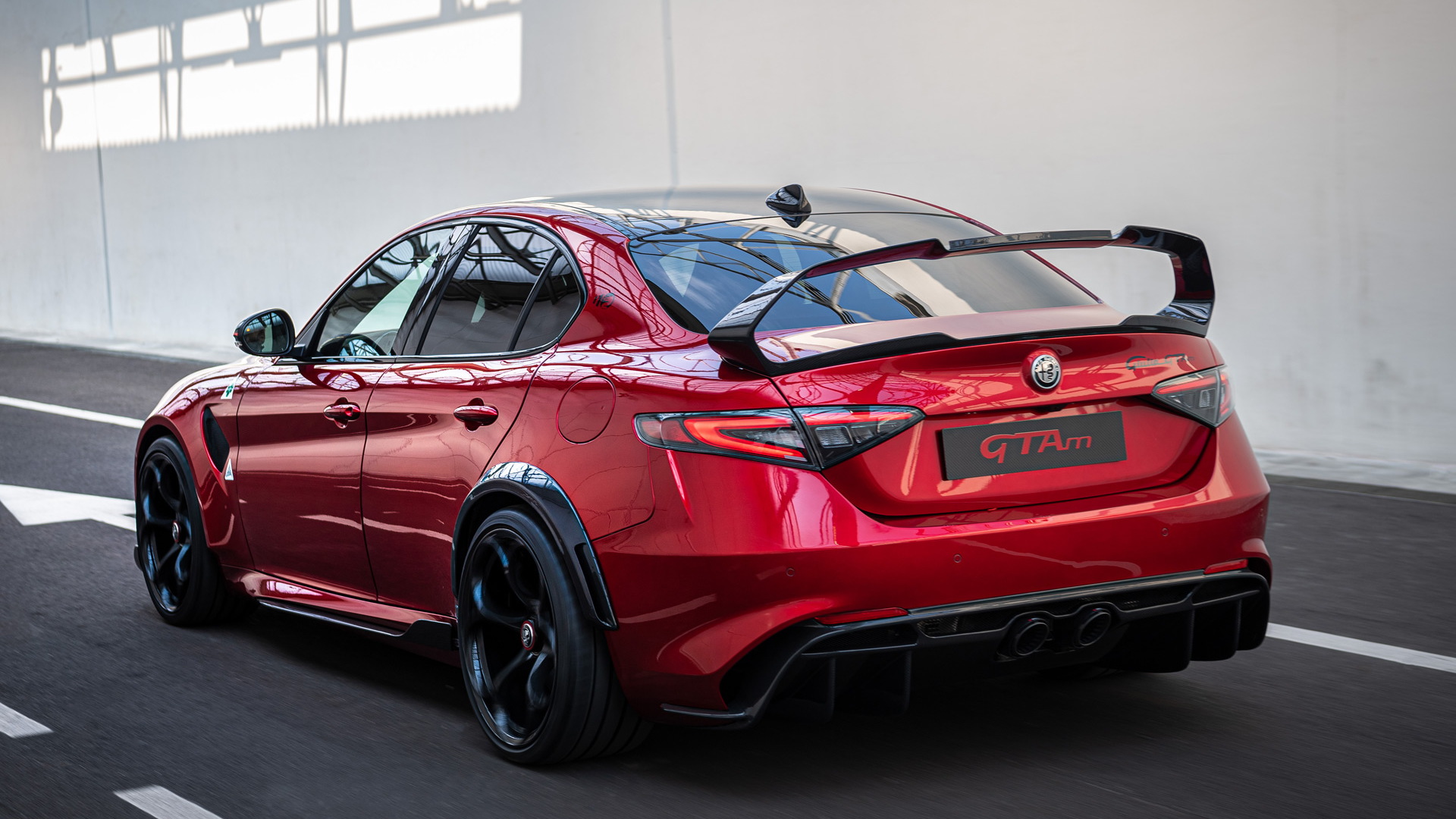 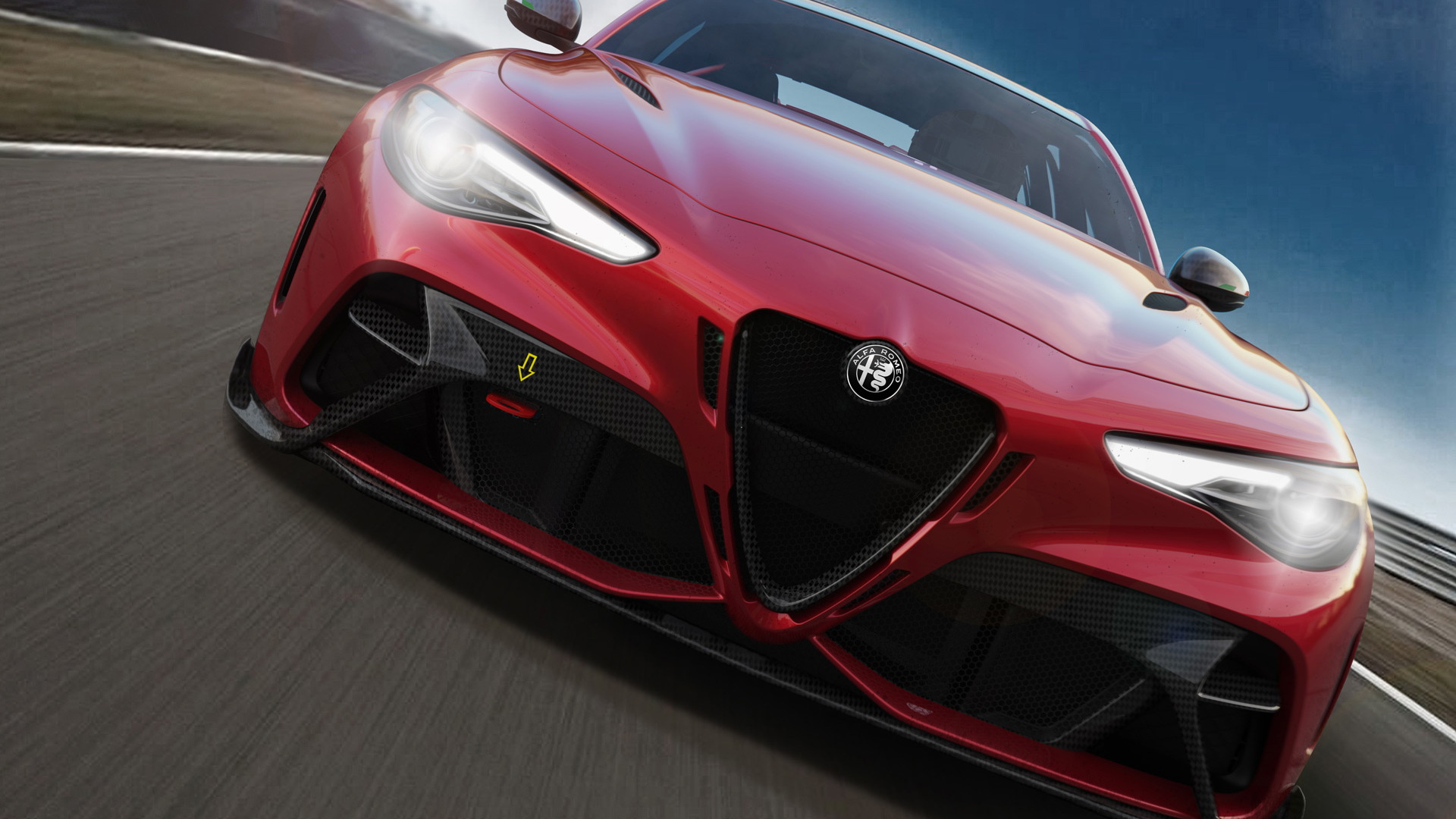 Alfa Romeo's Giulia Quadrifoglio is already one of the fastest sedans in production, but on Monday the Italian automaker unveiled not one, but two faster versions of the car.

The new models use Alfa Romeo's famous GTA badge and feature a 532-horsepower version of the 2.9-liter twin-turbocharged V-6 that normally delivers 505 hp in the Giulia Quadrifoglio.

The GTA name dates back to the Alfa Romeo GTA based on the Giulia sold in the 1960s, and is short for Gran Turismo Alleggerita, Italian for “Grand Touring Lightened.” The original car was built for racing but under homologation rules a total 500 examples were built for the road.

Both cars weigh about 220 pounds less than the Giulia Quadrifoglio thanks to use of carbon fiber for many components including the drive shaft, hood, roof, front fascia, extended wheel arches, and more. Aluminum also replaces some steel components, like in the engine, doors and suspension. A lighter, center-mounted Akrapovic titanium exhaust is also fitted. Finally, the glass side and rear windows have also been replaced with lighter Lexan—a polycarbonate resin that comes straight out of racing. The end result is a curb weight of about 3,350 lb, which isn't bad for a small sport sedan.

The GTAm is designed for the track but remains street-legal. It's easily recognizable by a bigger rear wing than the GTA, as well as a stripped-out cabin that features a roll bar in place of the rear seats, a pair of racing buckets up front, and 6-point harnesses.

Other mods on the cars include a new aerodynamic package with active elements up front that were developed with Sauber Engineering, a partner of the Alfa Romeo Formula One team, plus a 50-millimeter wider track, stiffer suspension, and 20-inch center-lock wheels.

Using launch control, owners of either model can expect to complete the 0-62 mph dash in 3.6 seconds. Alfa Romeo hasn't mentioned any other performance numbers, but you can bet the automaker will be out to beat the Giulia Quadrifoglio's 7:32 Nürburgring lap time. The current record for a production sedan at the 'Ring is the 7:21.23 set by the Jaguar XE SV Project 8 in 2017.

Alfa Romeo is currently accepting expressions of interest on the cars, and as mentioned there will only be 500 examples all up. Each owner can also look forward to a package that includes a Bell helmet in special GTA livery, a full racing set by Alpinestars (race suit, gloves and shoes), a custom car cover, and an invitation to a driver-training course.