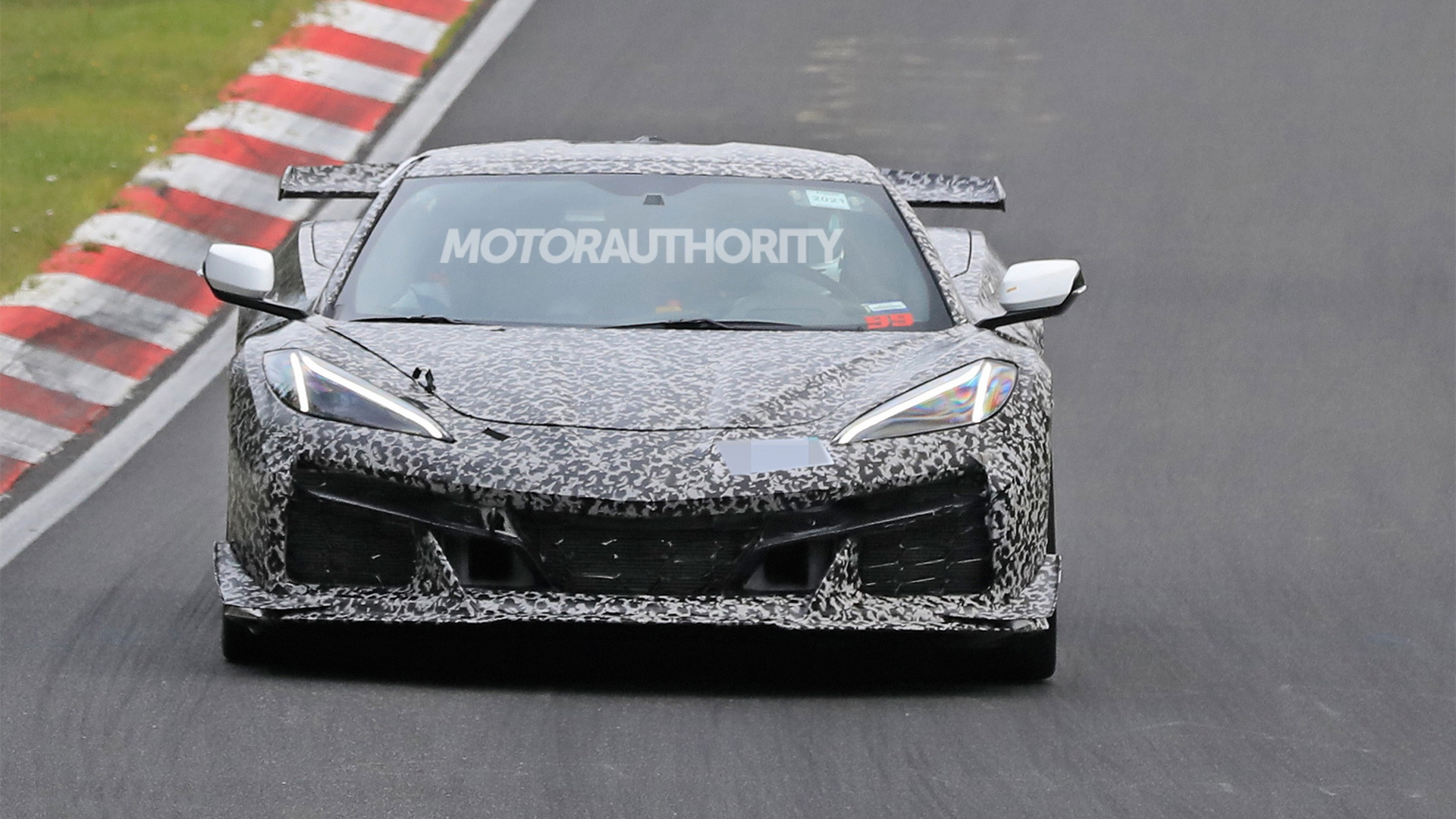 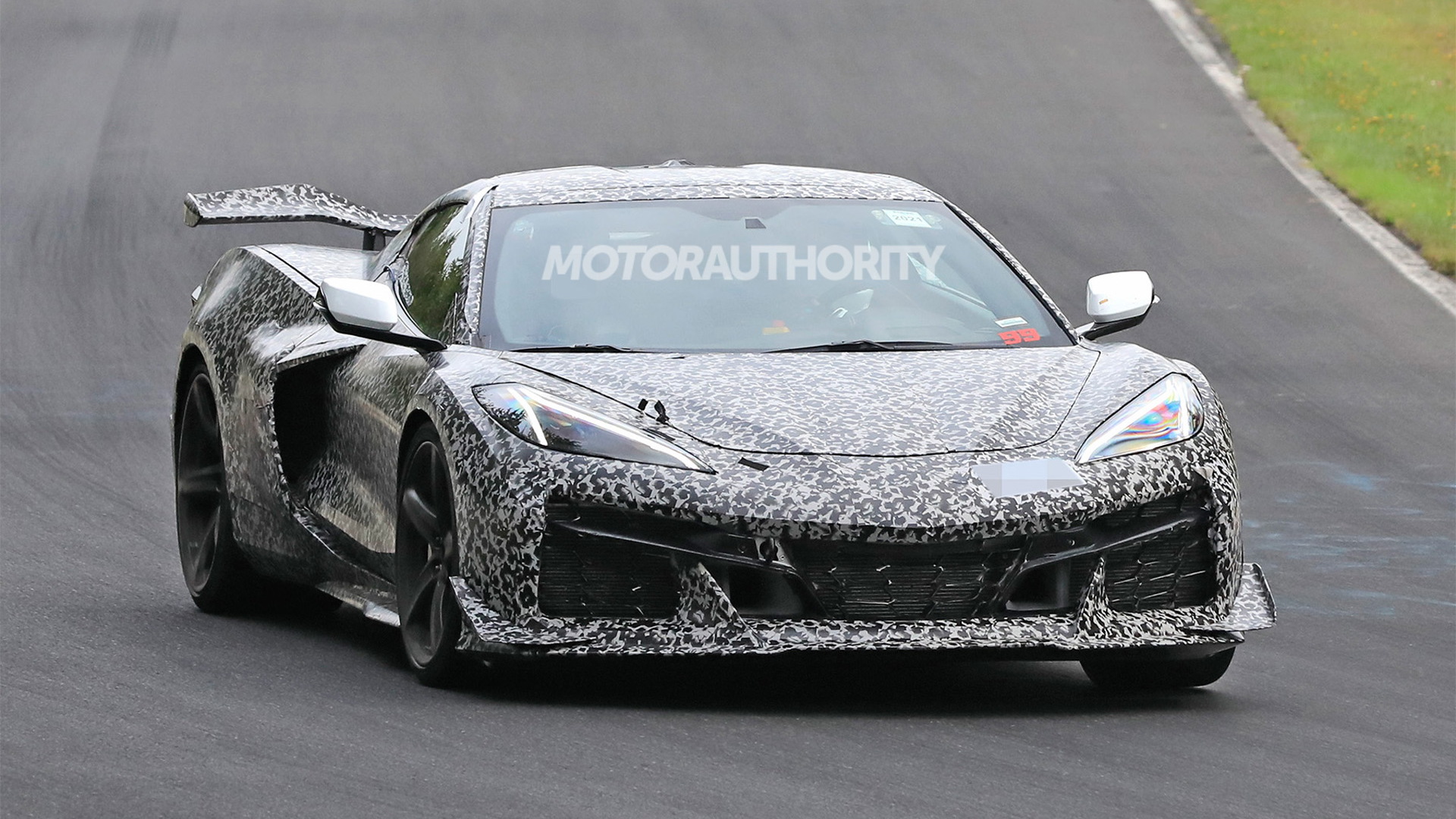 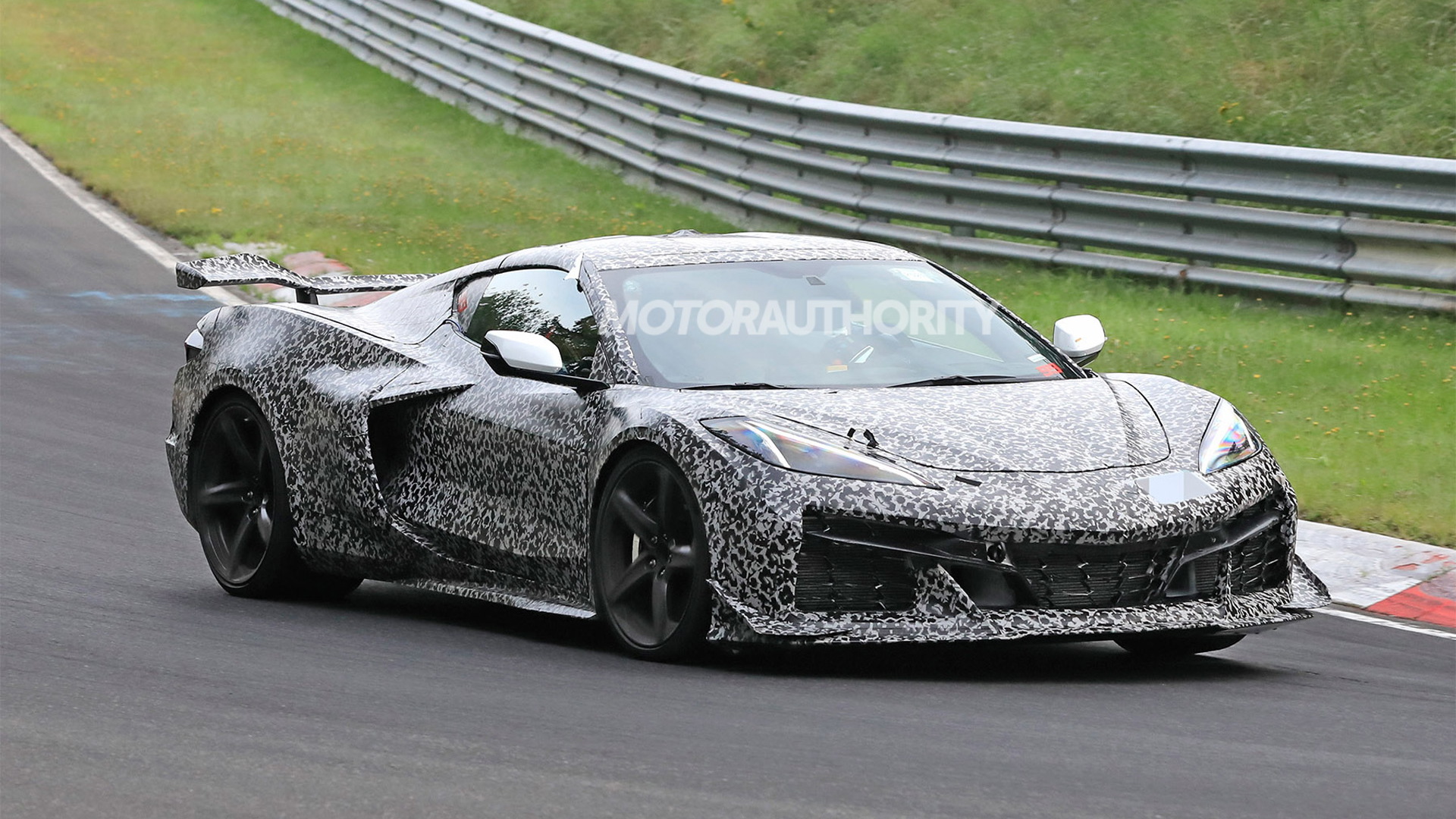 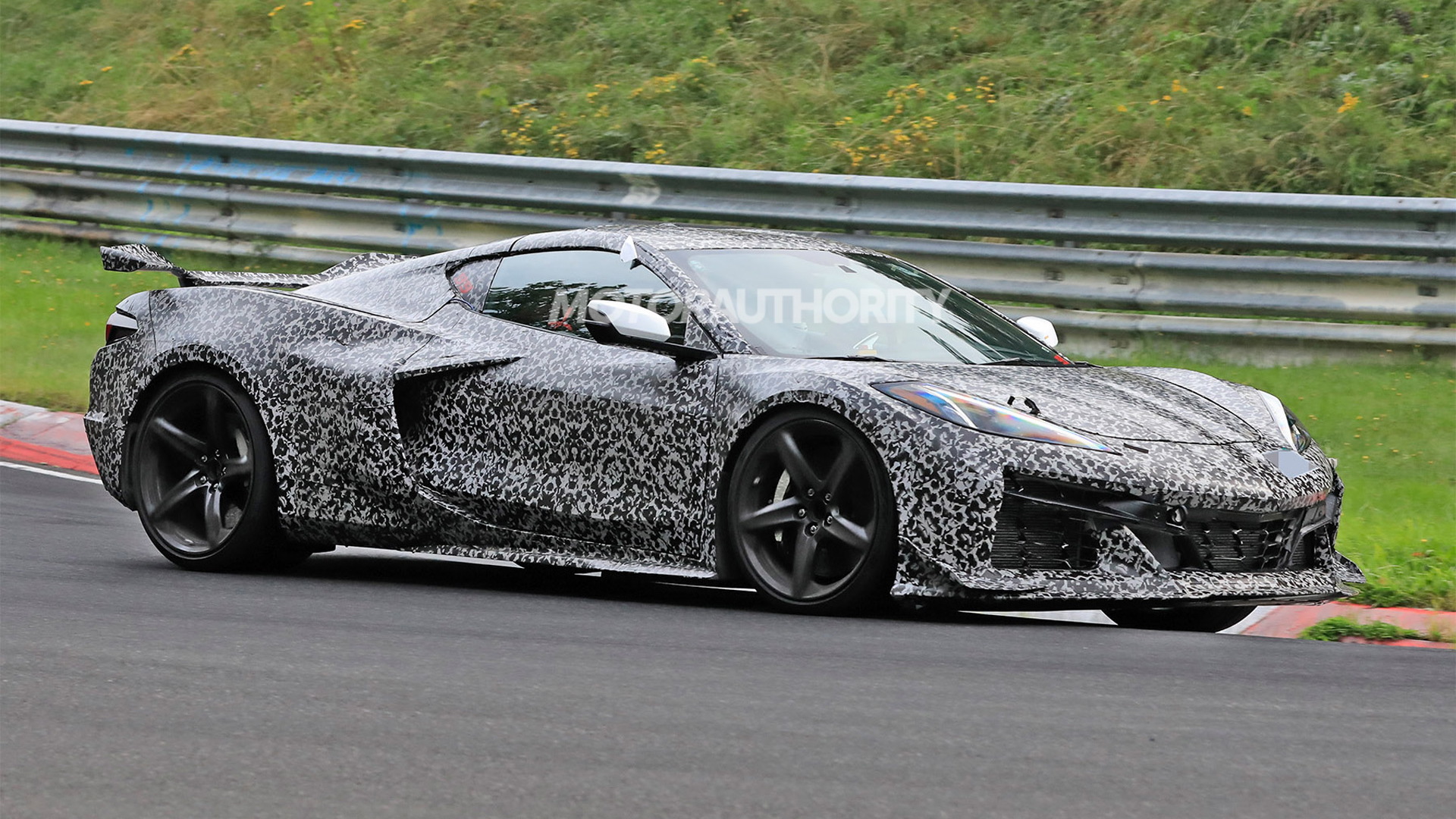 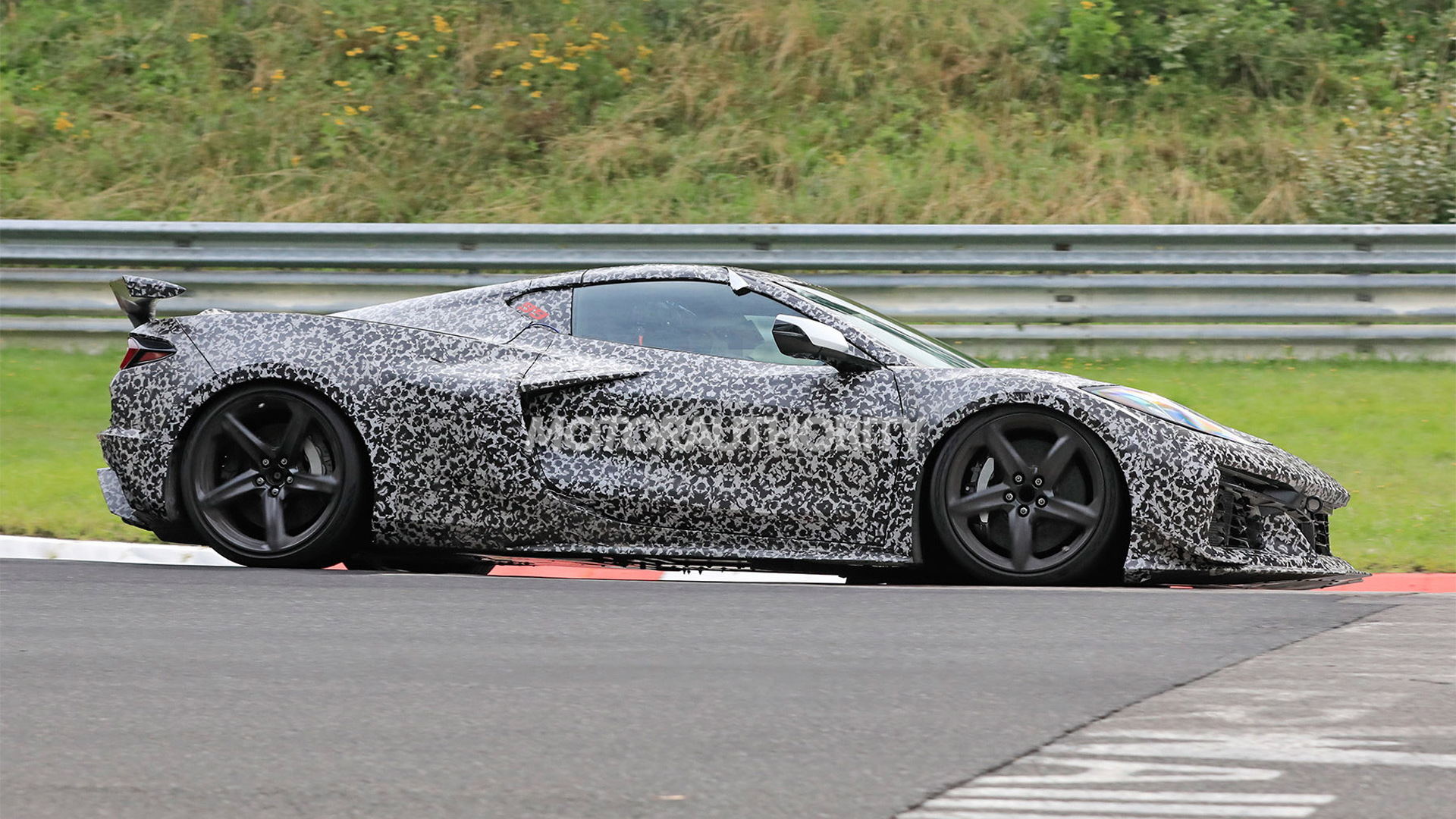 The C8 Chevrolet Corvette Stingray is into its second year and the general consensus is that the Bowtie brand has a huge hit on its hands.

But the Stingray represents just the first stage of the mid-engined C8 Corvette's performance. There is still a handful of models to come, one of which will be a track-focused Z06.

Fresh prototypes of the Z06 have just been spotted ahead of the planned reveal on October 26. The car will arrive at dealerships sometime next year as a 2023 model.

The prototypes may look like previous testers for the Stingray but there's no missing the wide-body design and agressive aero. The wider body supports enlarged side intakes and also wider wheels. On the Stingray, the rear tires max out at 305 millimeters, but the rear tires on the Z06 are a meaty 345 mm. The front tires are 275-mm wide. The choice of rubber is Michelin's brilliant Pilot Sport Cup 2 Rs.

Inside, we can expect a few elements unique to the Z06. An official sketch has teased what appeared to be the Z06's cabin. The layout of the dash matched the design used in the Stingray, but the controls on the steering wheel were different and included a giant red button with “Spec Mode” written on it. There was also the layout of a racetrack in the instrument cluster, and carbon fiber on many of the surfaces instead of the usual leather.

As for what's powering the car, we can count on an engine related to the 5.5-liter V-8 fitted to the C8.R race car. The race car's engine is a naturally aspirated unit complete with dual overhead cams and a flat-plane crank—and this is the same configuration expected for the Z06. Just listen to the engine in our spy video and Chevy's own teaser video.

Peak power is expected to hover around 625 hp. Although this is less than the 650 hp of the C7 generation's supercharged V-8, there are plenty of buyers who appreciate naturally aspirated power, even if it means a lower top end compared to an engine with forced induction. The engine in the new Z06 is also expected to scream all the way to a 9,000-rpm redline, which should appease the many fans who were saddened to see the Z06 switch from naturally aspirated to supercharged power when the C7 generation arrived.

For the power hungry, a twin-turbocharged version of the new V-8 with something closer to 800 hp is expected in a new Corvette ZR1. Beyond the new Z06 and ZR1, expect Chevy to launch a pair of hybrids. One is expected to be a model to replace the Grand Sport, which we've also spied testing. The other is expected to be a flagship combining the ZR1 engine and an electric motor (or two). Don't be surprised if it ends up being badged a Zora, after Corvette father Zora Arkus-Duntov. An electric Corvette is also in the works, according to President Joe Biden.

Sadly, there's no word whether a manual transmission will be offered in any C8 variant, and there's a good chance one won't make it at all, though it's hard not to love Chevy's brilliant 8-speed dual-clutch transmission that debuted in the Stingray.