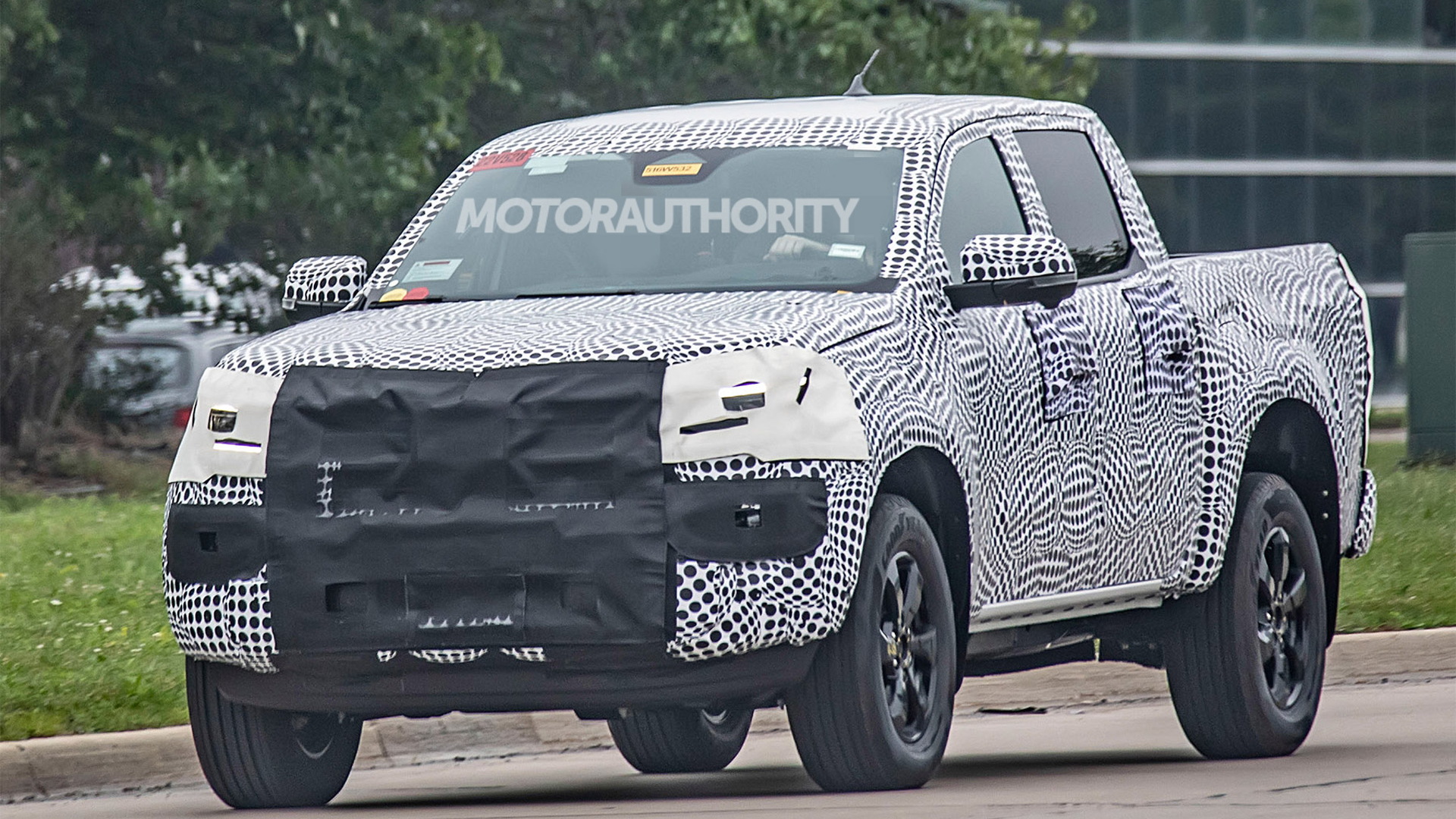 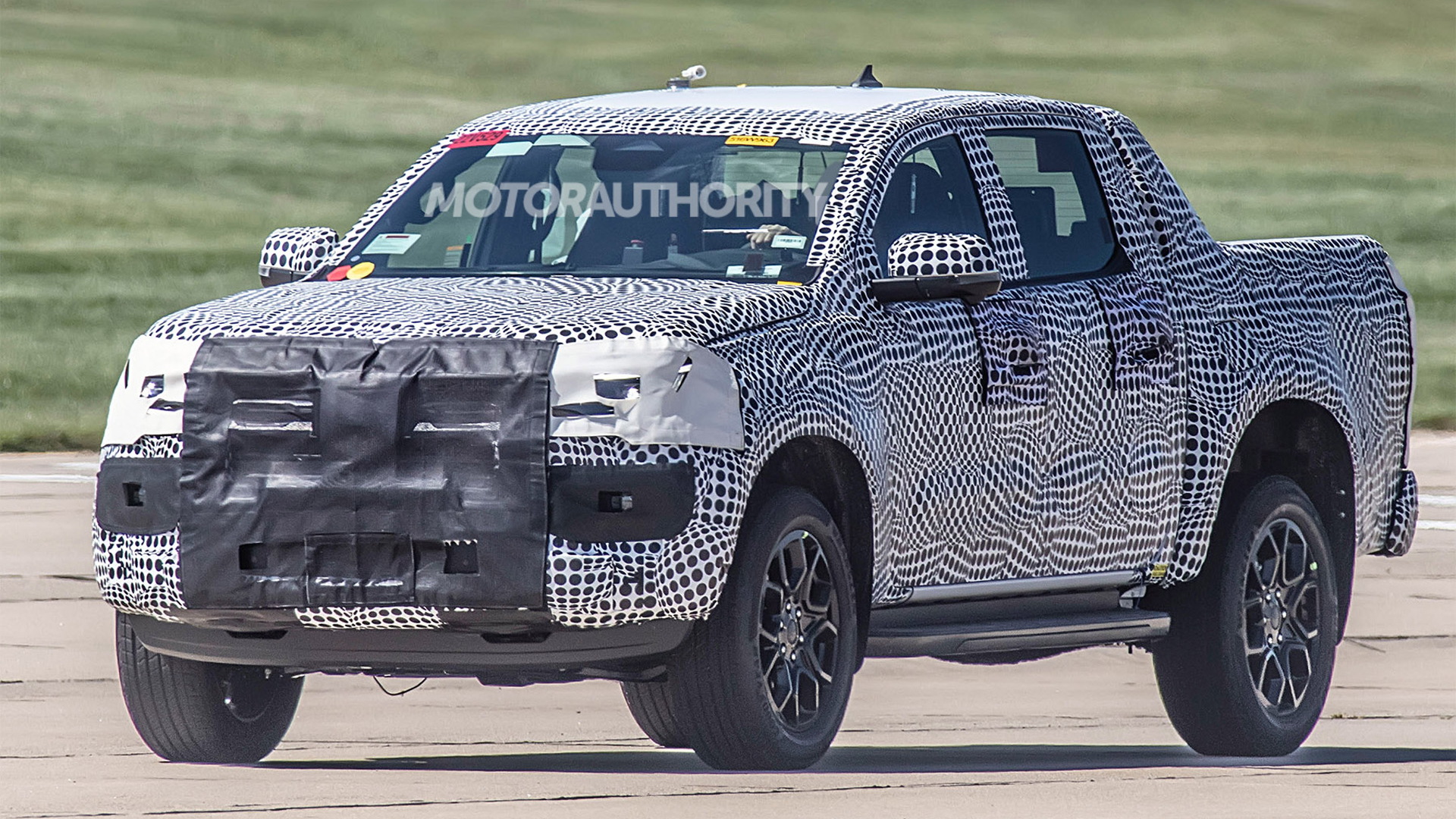 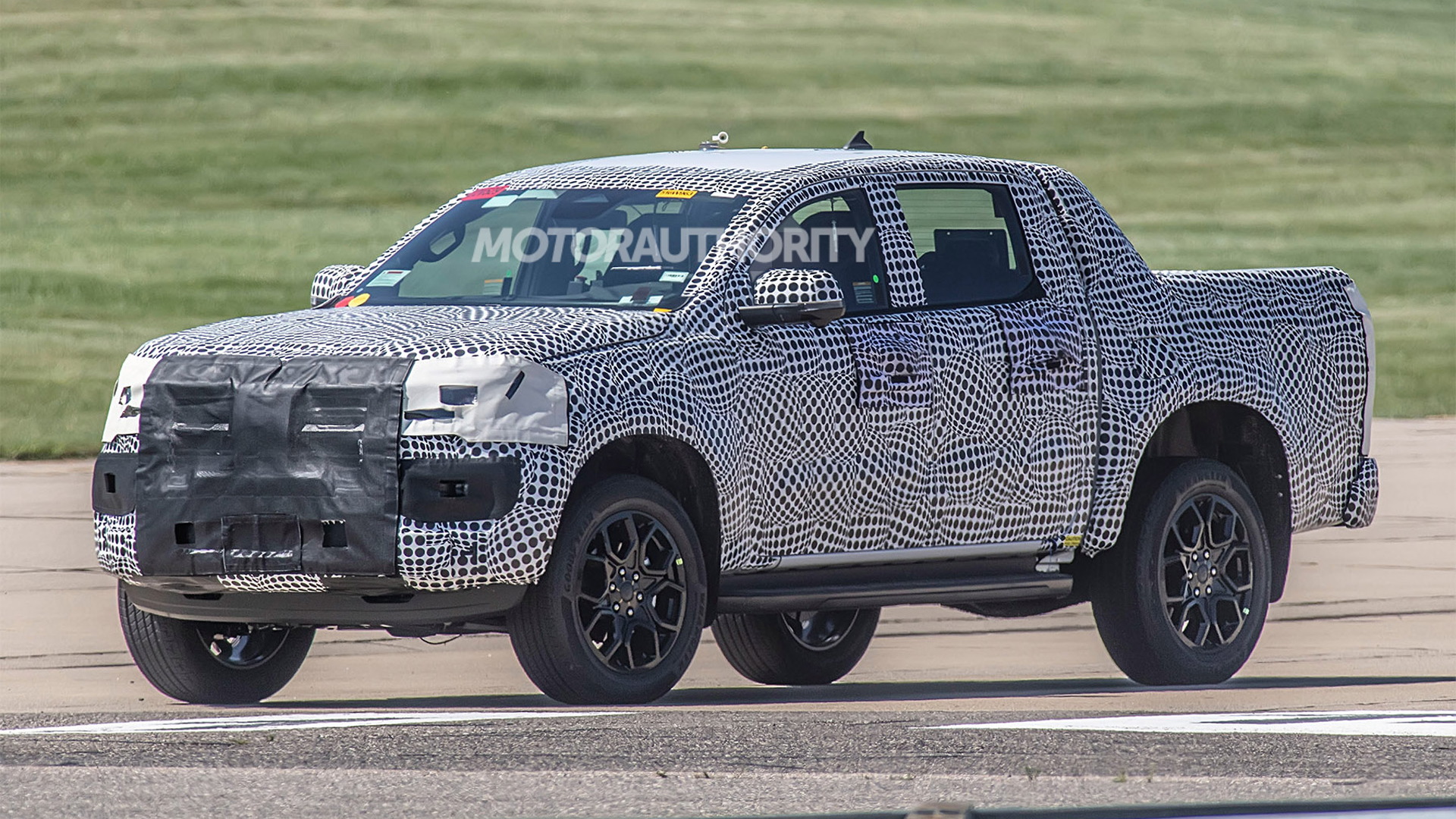 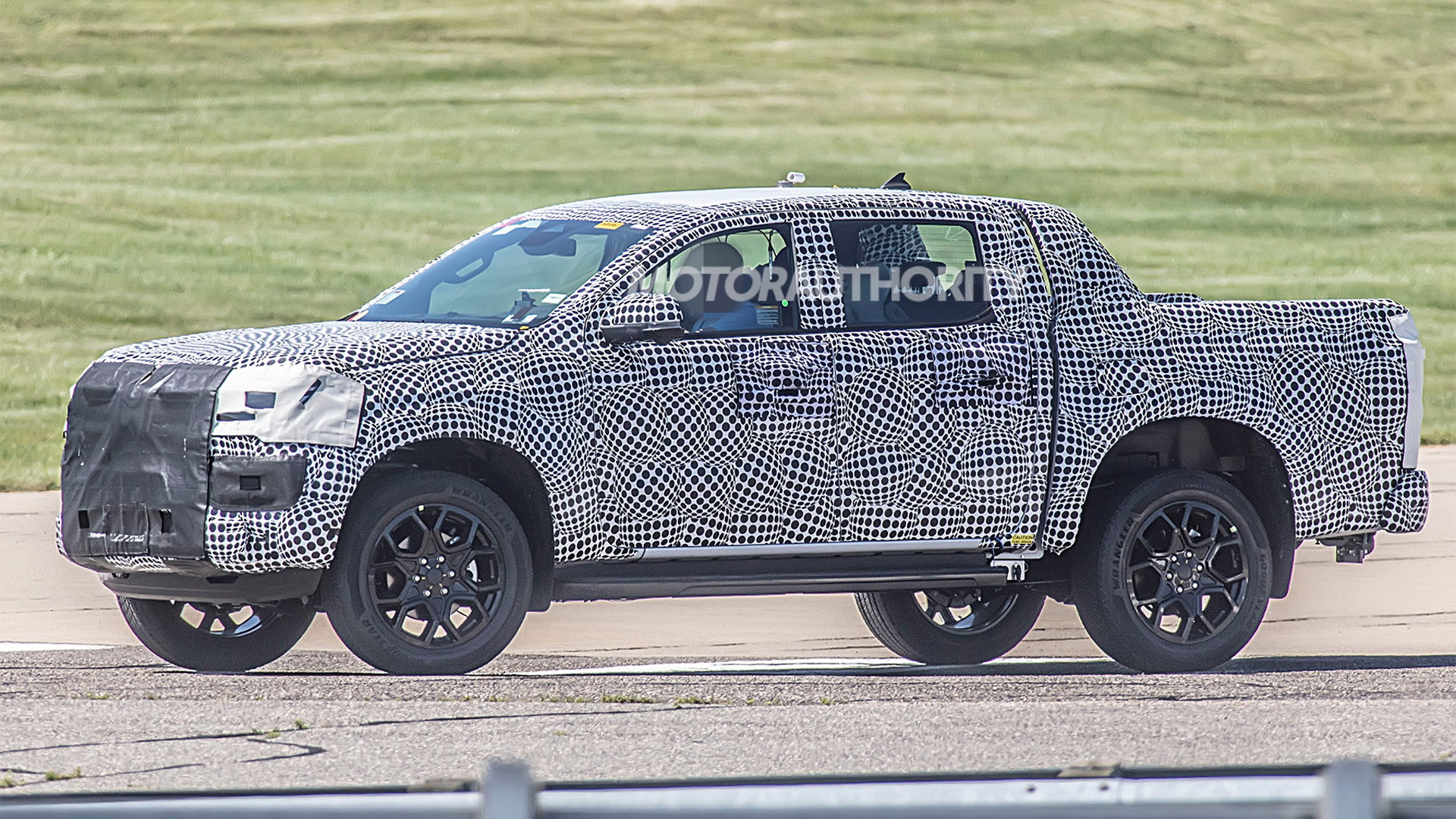 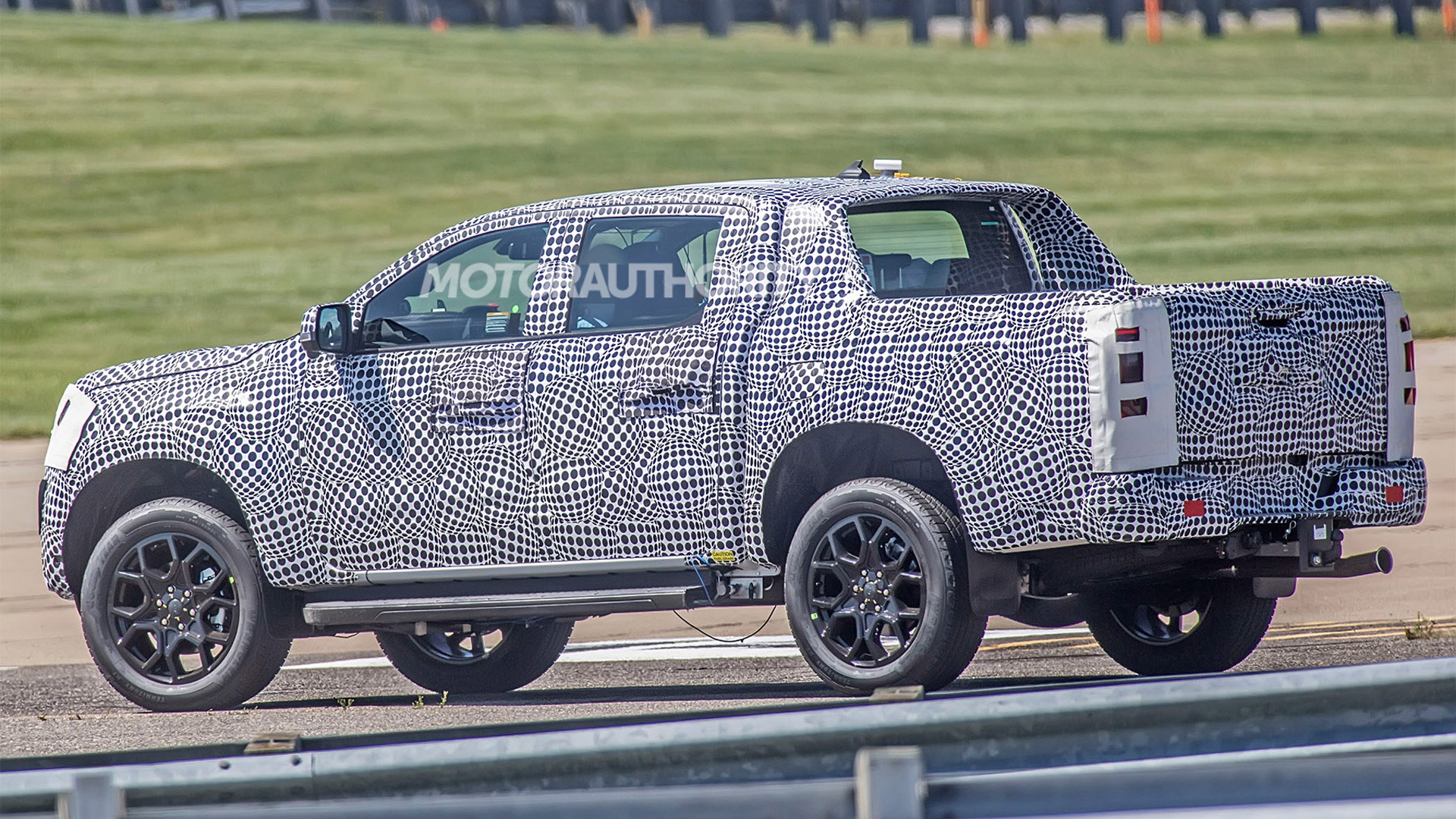 A prototype for Volkswagen's redesigned Amarok mid-size pickup truck due in 2022 has been spotted for the first time. It was snapped undergoing testing at Ford's main test site in Dearborn, Michigan.

Some readers will recall that VW's Volkswagen Group parent in 2019 said it was working on a handful of joint projects with Ford, including platforms, production facilities, and self-driving technology.

VW last year confirmed that one of the joint projects would be a redesigned Amarok based on the same T6 body-on-frame platform as the next Ford Ranger due for a reveal around the end of the year. The spy shots show that the vehicles will be very similar, though there will be unique elements to differentiate them.

VW previewed the design of its pickup in a teaser sketch shown in March (shown below). The teaser hints at a somewhat aggressive look for the new pickup. It also suggests VW will stick with the crew cab design of the current Amarok launched in 2010.

Powertrains should be shared across both pickups. This means turbocharged inline-4 and V-6 options, including diesels in some markets. Expect a 6- or 7-speed manual to be standard and a 10-speed automatic to be available.

Ford will build the Amarok for VW at a plant in South Africa, with the pickup so far only confirmed for the South American, European and African markets, though both Ford and VW have left the door open to it possibly being sold in the U.S. That would mean the Amarok would need to be built in the U.S. to avoid the 25% Chicken Tax on imported trucks, which is a possible outcome considering the next Ranger will be built at the same plant in Michigan where the current Ranger is built. It would make sense for the Amarok and Ranger to share a production line in the U.S., too, should a local launch be approved.

Teaser for next Volkswagen Amarok due in 2022 - Photo credit: Motor1

A trademark filing for the Amarok name with the United States Patent and Trademark Office discovered in 2018 suggests that VW is at least looking at the possibility. Another, less likely alternative is VW building a separate pickup at its plant in Chattanooga, Tennessee. The automaker hinted at the possibility with 2018's Atlas Tanoak concept which was based on the same unibody platform as the Atlas SUV already in production in Chattanooga. The last VW pickup sold in the U.S. was the small Rabbit which bowed out in 1984.

In return for developing and manufacturing the Amarok for VW, Ford will get a new commercial vehicle from VW, in this case a small van based on the VW Caddy. VW Group will also license to Ford the MEB modular electric-vehicle platform. Ford will use the platform for one or more EVs to be sold in Europe, the first of which is due in 2023. Ford estimates it may need as many as 600,000 units of the MEB over a 5-6 year period.

Look for the covers to come off the new Ranger in the next six months. The new Amarok should debut about six months after its Ford twin.