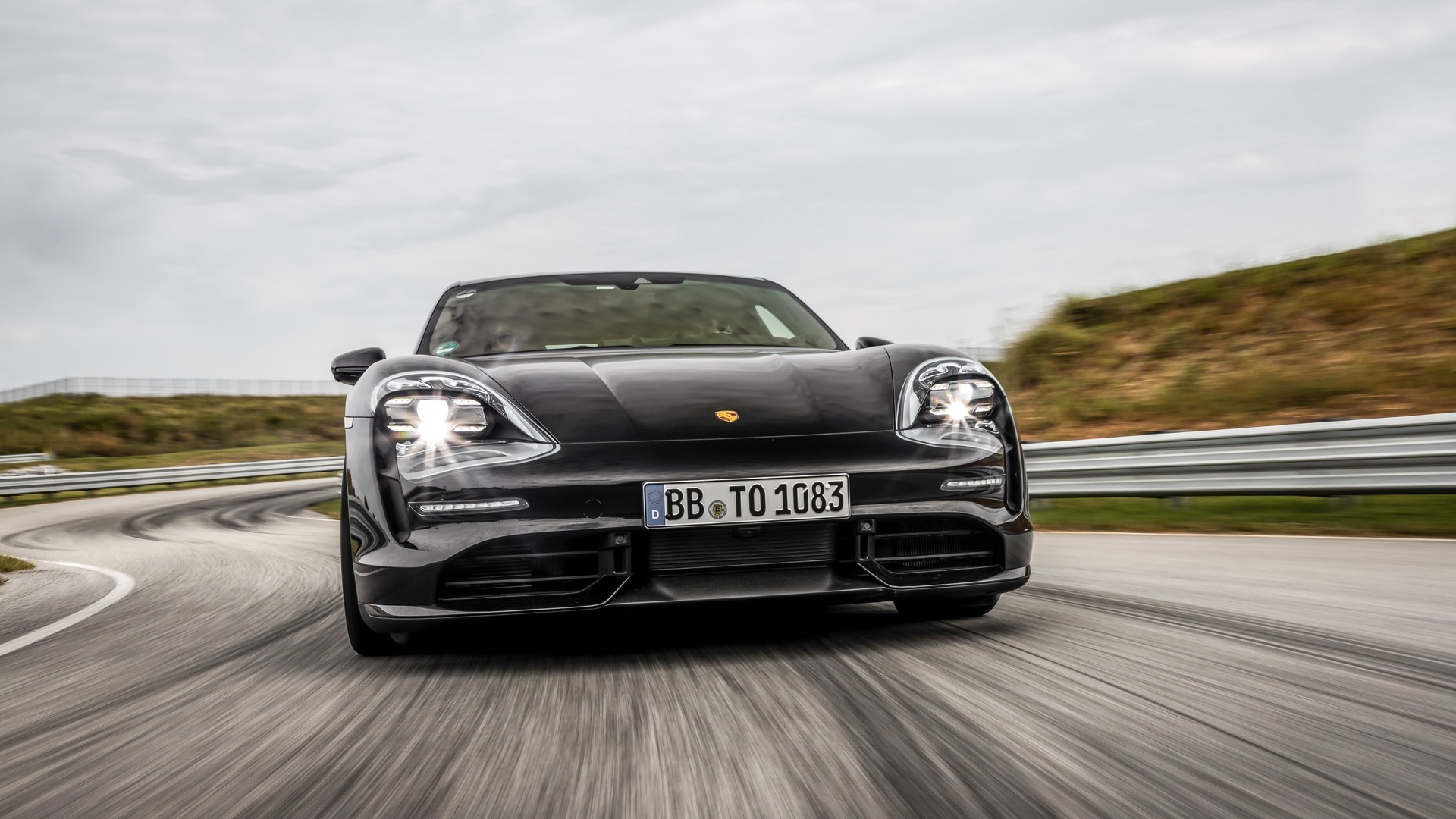 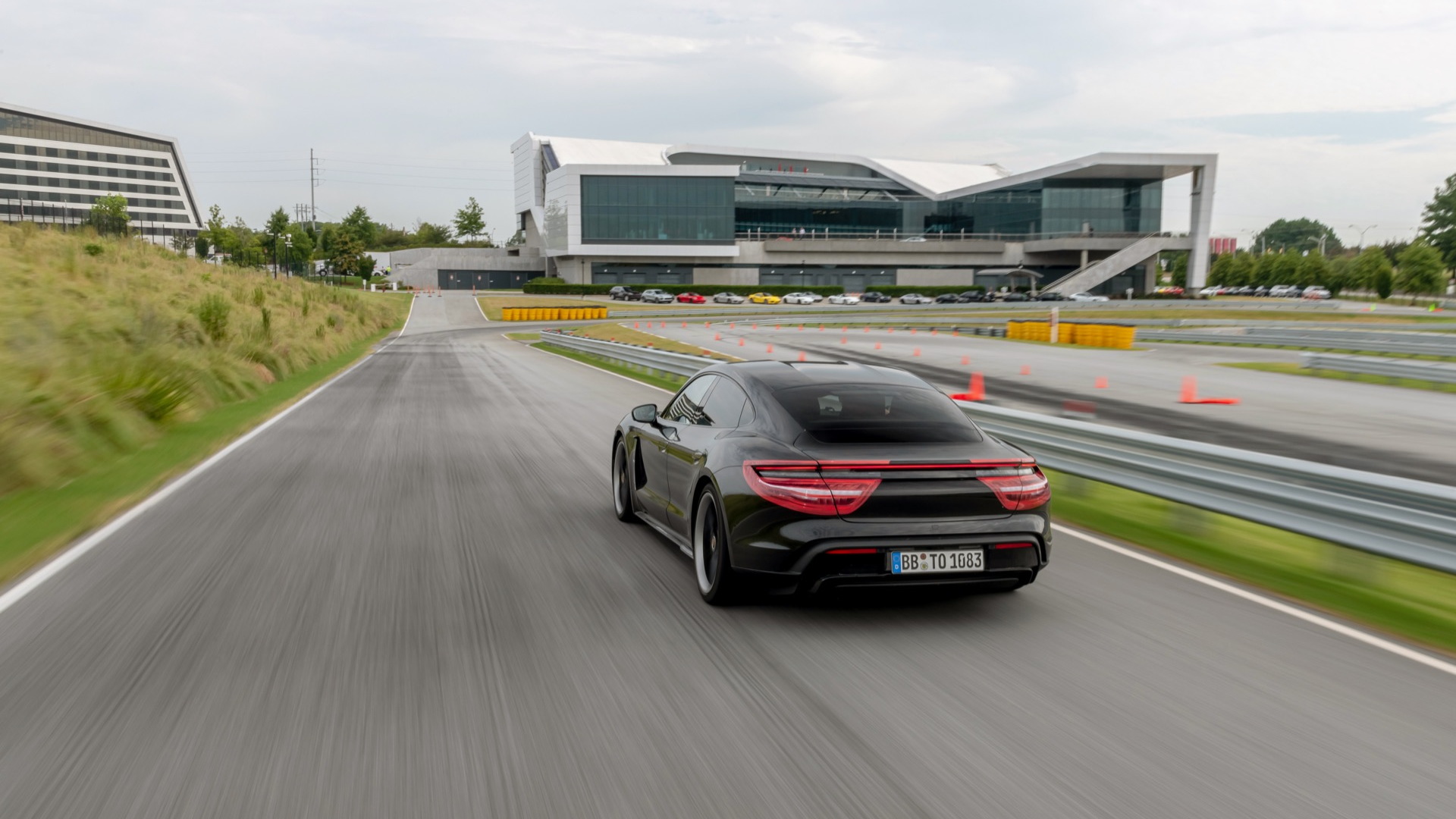 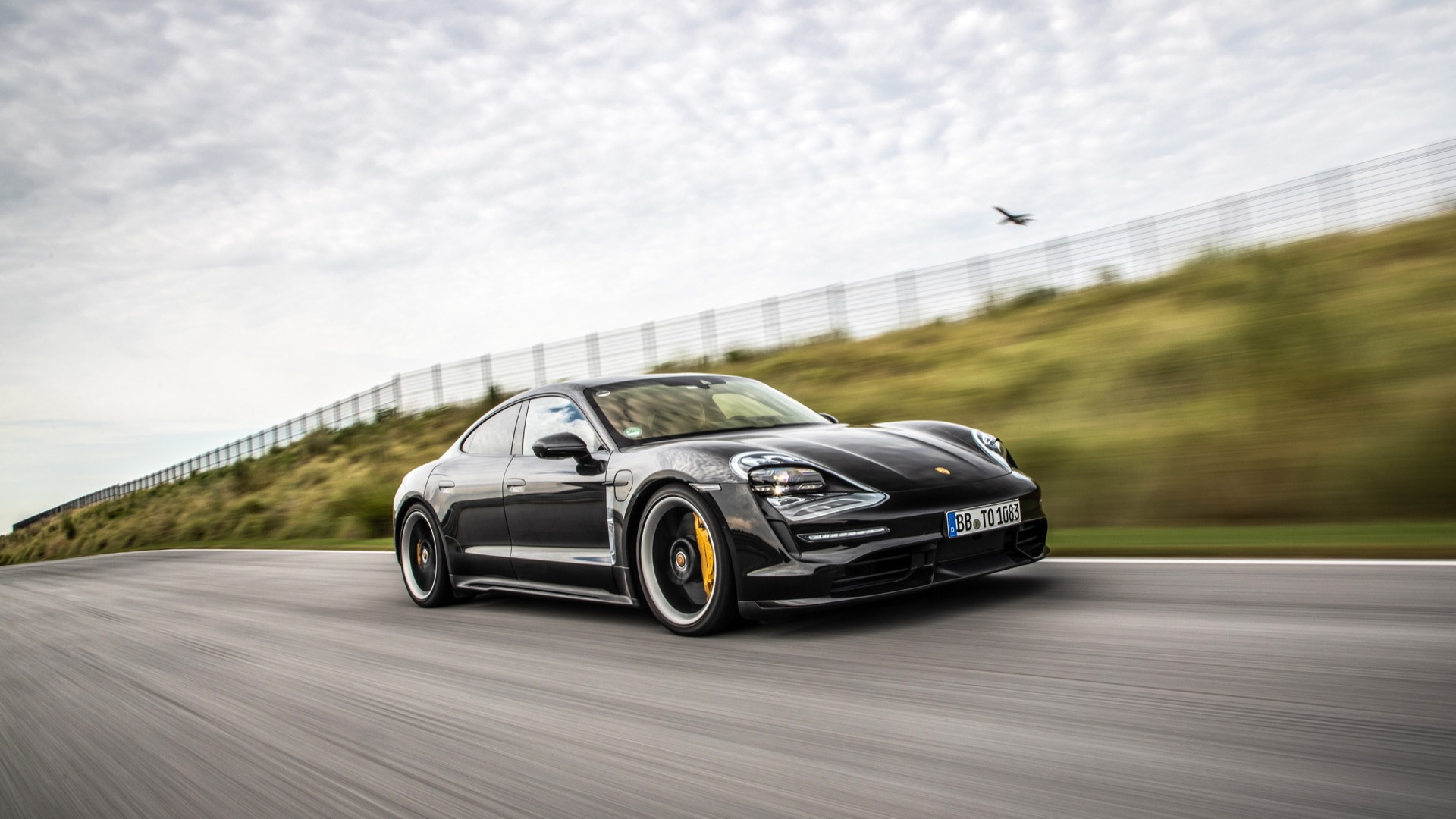 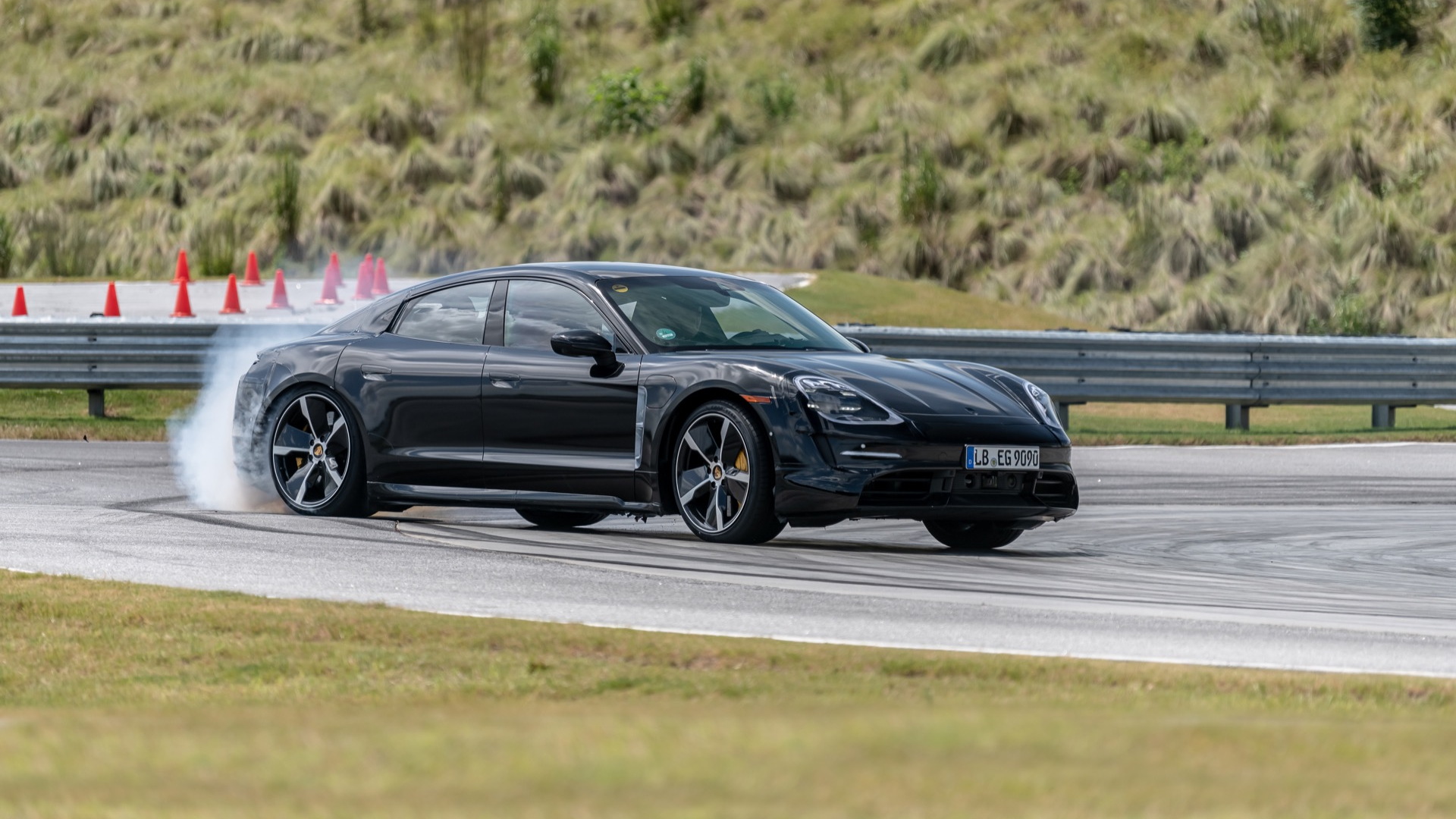 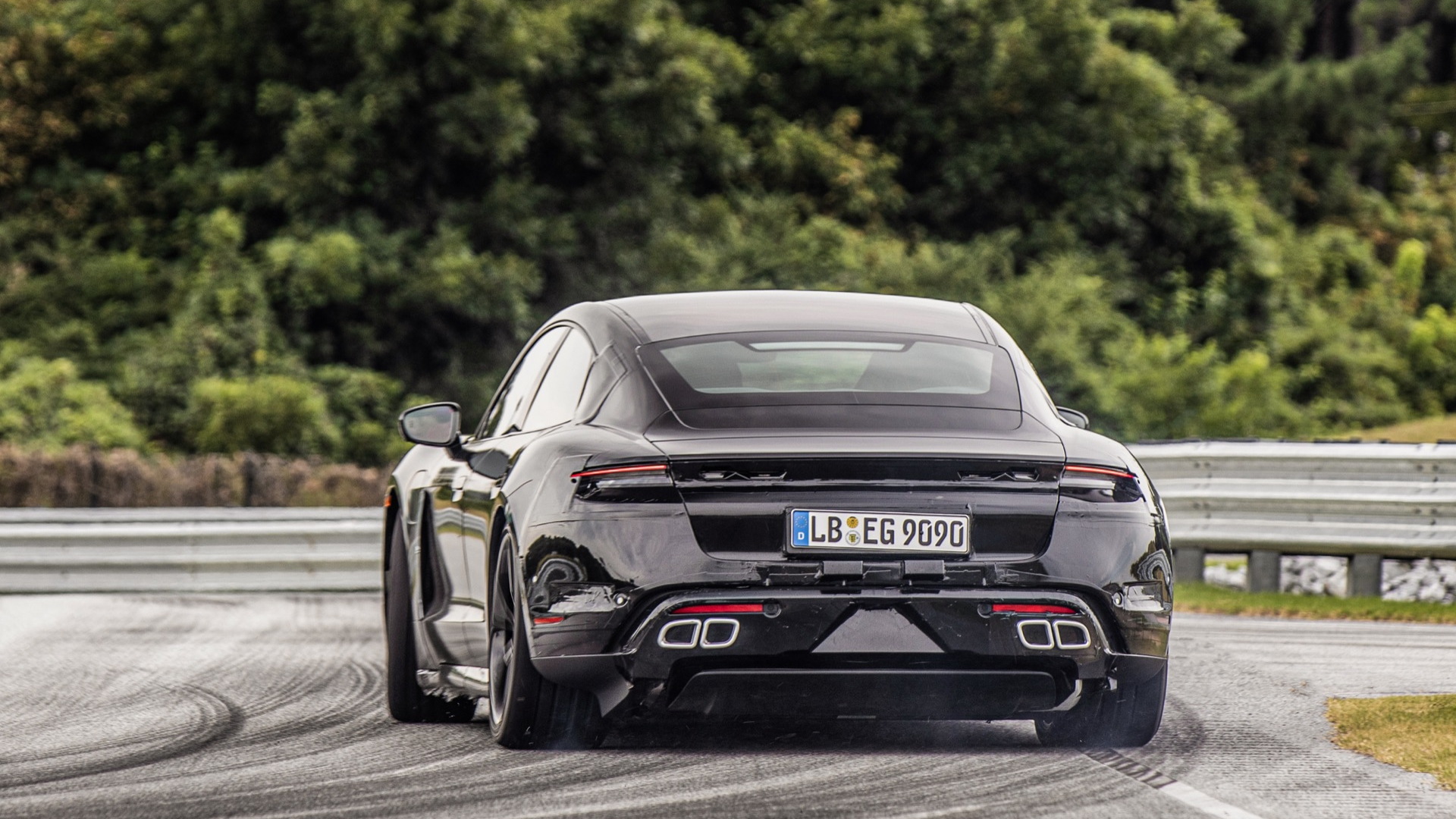 Breathtaking. Figuratively and literally, it was the best honest word I could conjure in the moment to describe how it felt to be catapulted well past 60 mph in the passenger seat of a 2020 Porsche Taycan Turbo S, in the first of four very hot laps around the 1 Mile Handling Circuit, part of the Porsche Experience Center at Porsche’s North American headquarters in Atlanta.

The driver, a Porsche chassis development engineer, had prepared me for the launch, and I made sure my desk-job-tortured neck and shoulders were in position and relaxed. But I still wasn’t prepared for the g-forces just milliseconds off the starting gate, when the electric motors are already twisting out their full 774 pound-feet of torque.

I’ve done acceleration runs in a few different sub-3-second (to 60) cars—including Ludicrous-style, in the Tesla Model S—but this one was different, because of that initial punch in the first few feet, and the feeling that blood was rushing to the back of my head and internal organs were being repositioned. And then, how damned fast the road was coming after a couple short seconds and zero blinks of the eye.

Sure, Porsche’s 800-volt technology, and the ability to downsize and redesign some of the power electronics, played a part in this punch—and in truth it’s the root of keep-it-cool performance repeatability for this whole system. But the less glamorous secret weapon to the brutality of this launch (outside some very sticky tires, and ace stability control) is that the Taycan’s rear motor unit—the stronger of its two motor units—incorporates a two-speed gearbox, with the low gear configured entirely for handling the torque of that off-the-line rocket launch and getting that gasp-inducing response at low speeds.

What I didn’t hear or otherwise detect—and it must have happened during our drive—was the shift of the two-speed transmission from Low to High. According to Porsche, the low gear about doubles wheel torque at the rear wheels versus the high gear, which otherwise matches the gear ratio of the front motor. With all the performance settings checked, Porsche says that full-throttle upshift happens at about 65 mph, with a theoretical max for first of about 81 mph.

Hurtling around, to tire sounds and little else

In the process of hurtling around the small track for four very hot laps, in two different cars, and in between the shrieking of the tires, I heard the sounds made by the Taycan in two quite different ways. In the first car I could only hear faint motor whine that became drowned out by road noise at higher speeds.

The second car I rode in was optioned with the Porsche Electric Sport Sound; it supplements the engine note through cabin speakers—which seemed to be biased toward the back of the cabin, leading to a rear-engine whoosh that’s uncannily familiar in a Porsche. Engineers would only wink and look the other way when I asked if some of it was in the same frequency range as a flat-6.

These were to be dynamic impressions only, as the interiors of the test cars were still masked with loose cloth and Velcro, in these final-spec development prototypes, leaving us hunting for door handles and things to hold onto underneath.

The Taycan’s seats, it turned out, were the least concern. The seating position in front is that of a sports car, and the seats themselves are supportive in every way you’d expect for a car that’s intended for outings to the track. From within the Porsche stable—especially once you’re moving—the seating position feels far more 911 than Panamera. It’s a near polar opposite of the seating position in the Model 3, where you look out over the hoodline; here you look out at the road some distance ahead—which, based on this car’s high-speed ambitions, is coming fast.

Around a wet, tight-radius skidpad, the Taycan felt tuned to hoon a fair amount, allowing the tail to slide wide, while at higher speeds on the road course it was clear that the front wheels were delivering enough torque to help reel in cases of too much oversteer. The drive mode was cranked over to Sport Plus, and the stability control system was in its Off position, which we were told still includes anti-lock brakes and a stability logic that will intervene with a tap of the brake pedal.

Among the two cars, both were Turbo S, but one had Porsche Dynamic Chassis Control and one didn’t. PDCC keeps the car very flat in most cornering but can detach to allow more wheel travel on bumpy surfaces. on and one with the standard suspension. On the smoothly surfaced track we found the PDCC car the more relaxing one from the passenger seat—although we’ve found the feature disconcerting in some real-world features like undulating higher-speed back roads.

PDCC or not, it was clear in quick changes of direction that the Taycan feels lighter than top-performance versions of the Tesla Model S—even though it’s a couple hundred pounds heavier than the Tesla. Credit the seats and driving position for some of that, possibly also the three-chamber air suspension that also helps quell the body-motion drama.

Don’t think of the Taycan as any sort of rival to the Model S. Strictly by first impressions from the passenger seat, Porsche has held true to what they’ve been saying all along, and produced a luxury sports car—a Porsche—that’s also electric.

And now, even more than before, we can’t wait to tell you what it’s like from the driver’s seat.