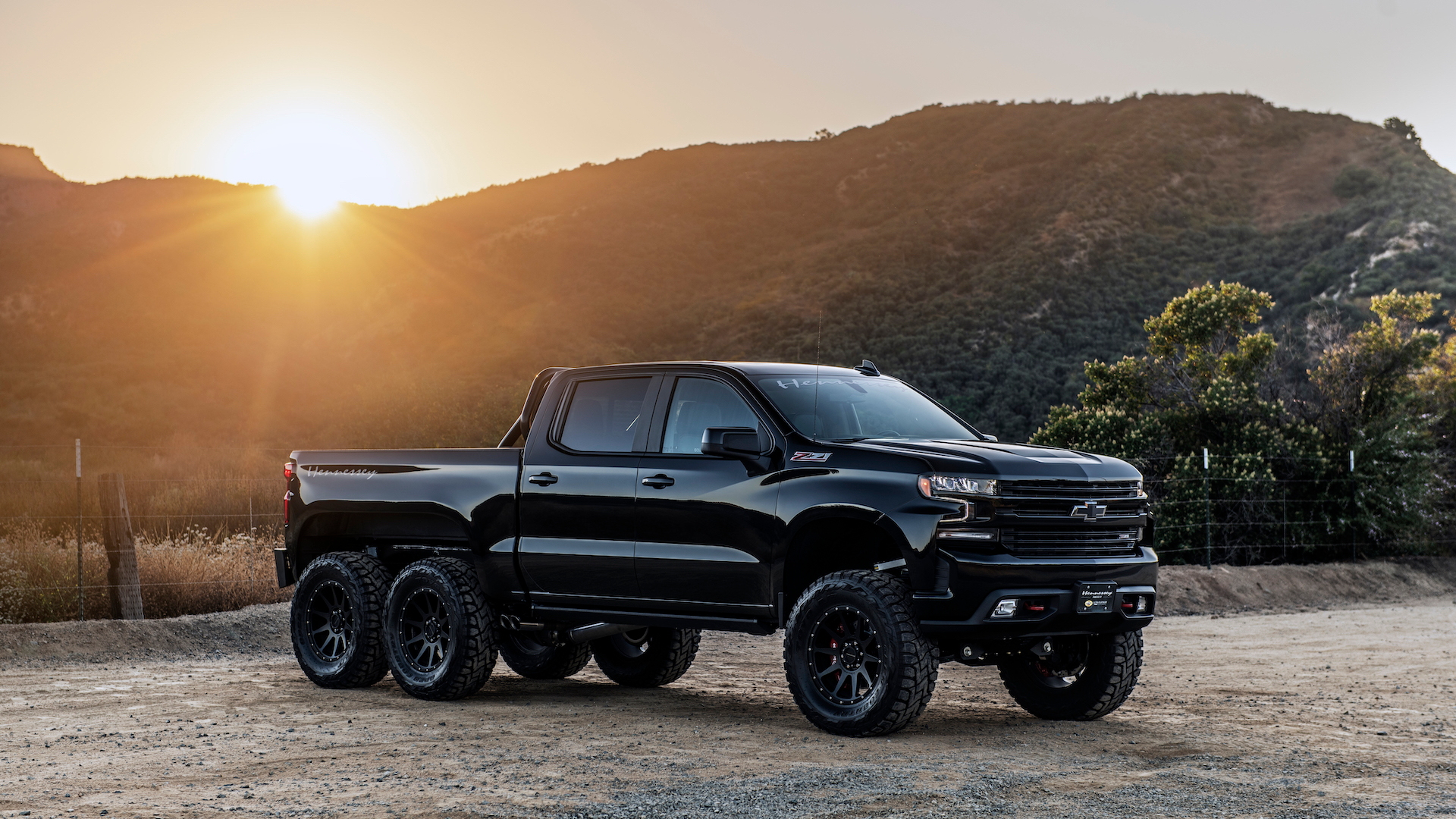 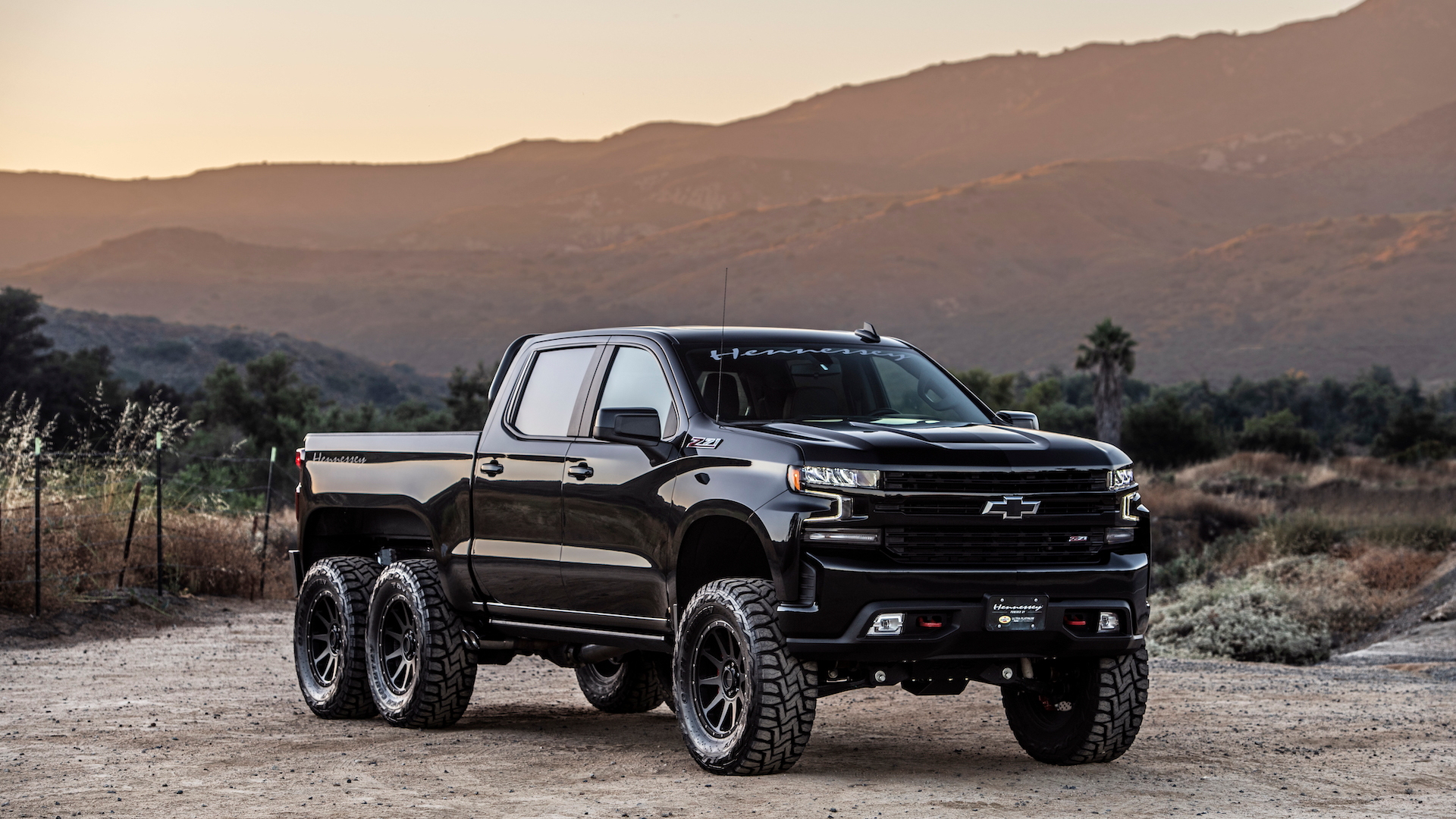 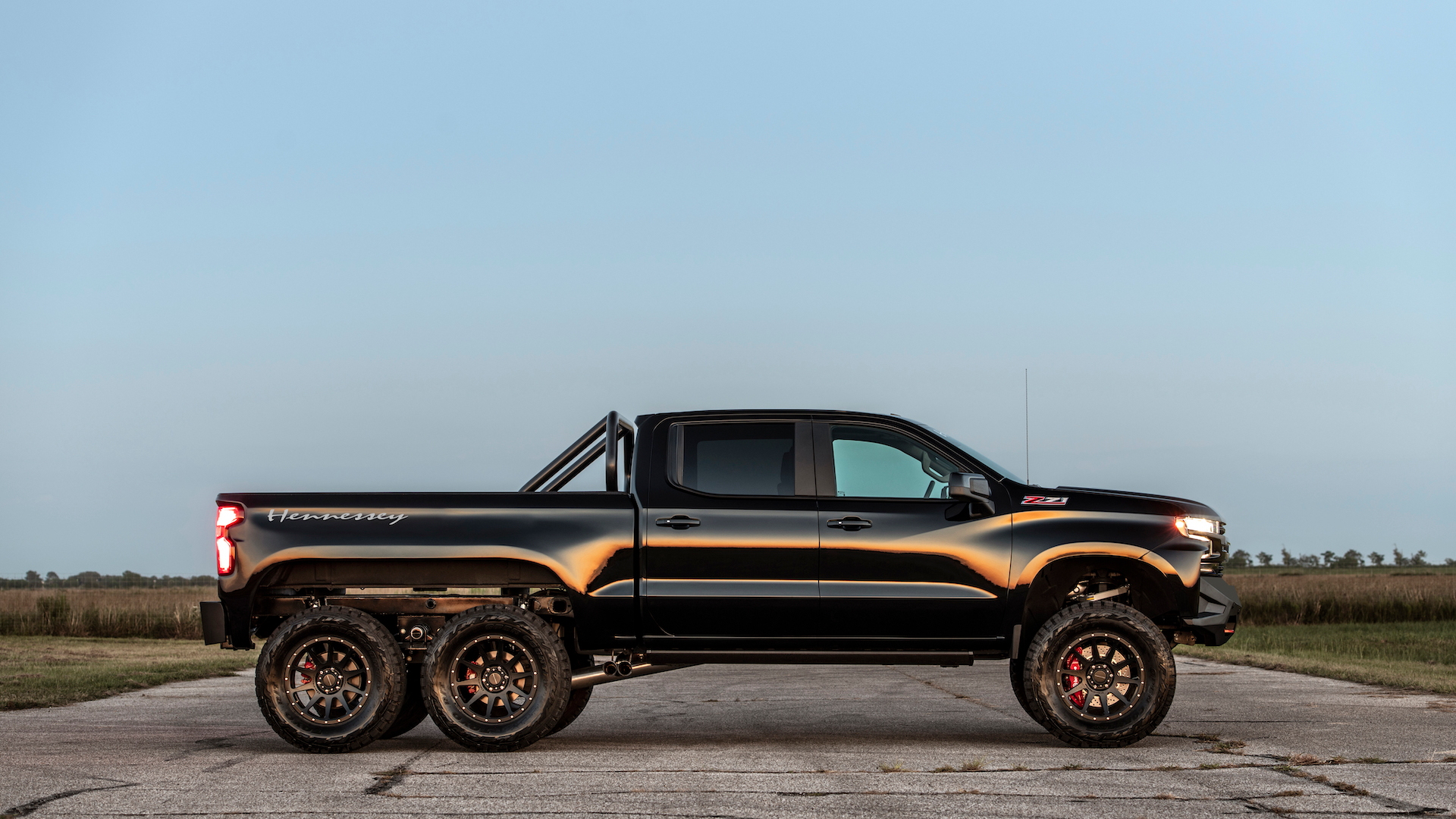 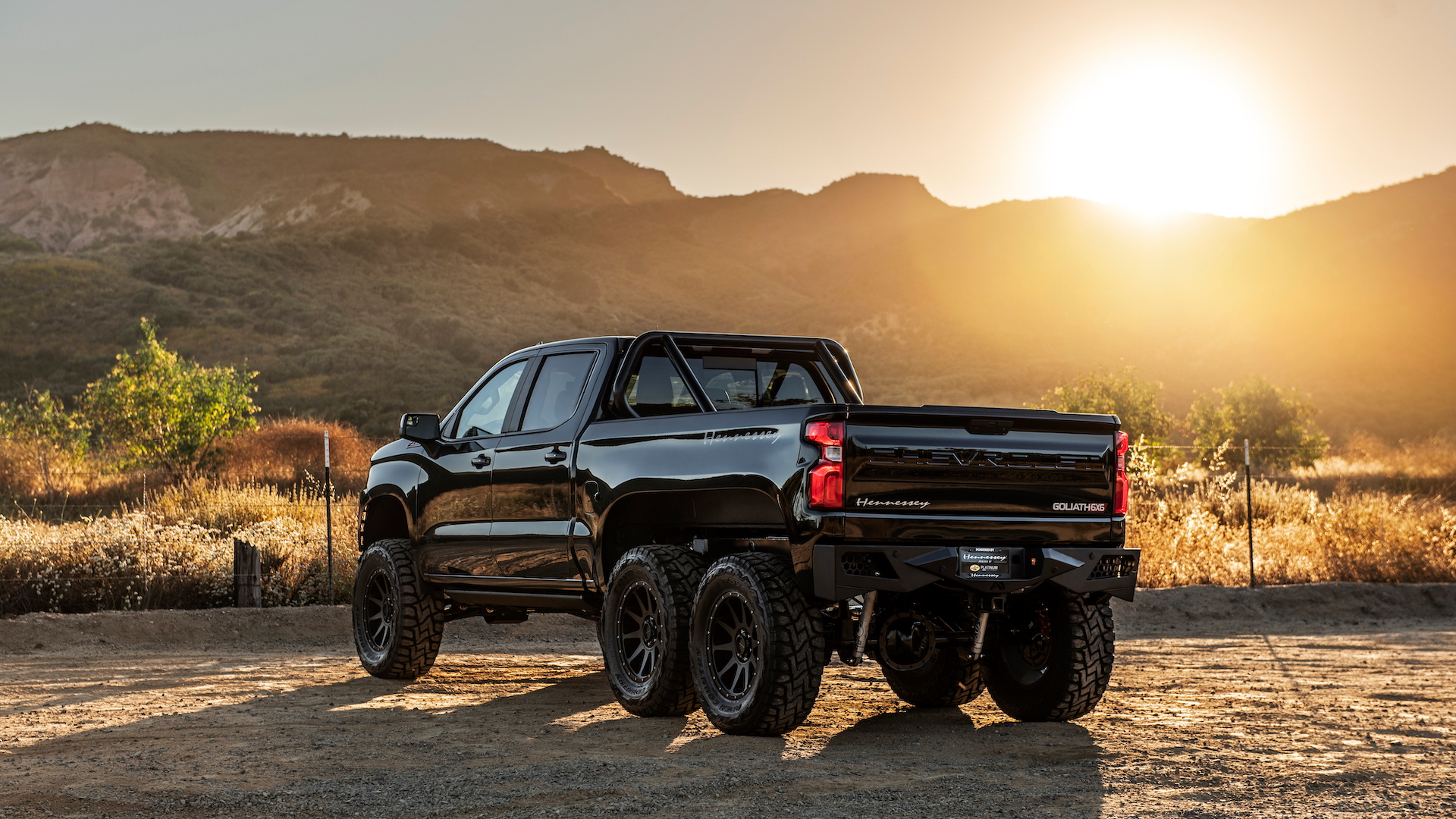 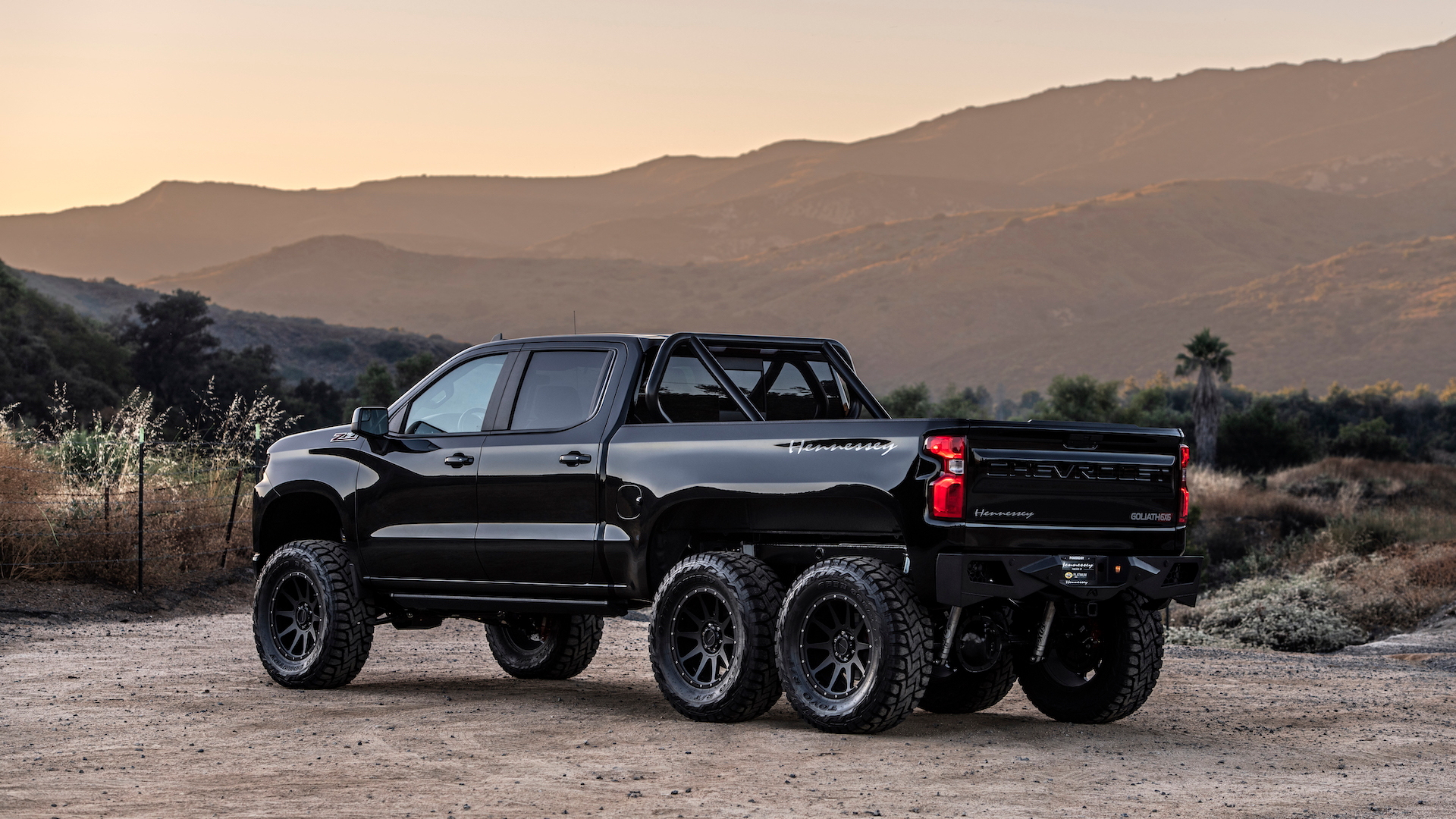 Hennessey Performance Engineering announced its intentions to build a wild Silverado-based monster truck last September and released a few renderings. This week, the Texas-based tuning company proved it's very real and very capable. In the process, the company is ready to give its own Ford F-150-based VelociRaptor 6x6 some competition with the Chevrolet Silverado-based Goliath 6x6.

The announcement doesn't provide any details we didn't already know, but it does confirm HPE is a mad company. As a refresher, the Silverado Goliath 6x6 gets an additional axle, new wheels, tires, and brakes, a new rear suspension system, 8.0-inch lift kit, and a custom bed for the mammoth pickup. The wheels and tires, specifically, are 21-inch HPE in-house units wrapped in 37-inch BFGoodrich off-road tires. The company also adds its own bumpers, LED lights, and a rollbar upgrade.

Obviously, the truck features "Goliath" graphics to remind any onlooker this comes from the Texas tuning company—loud and proud.

It doesn't stop with the appearance, however. HPE juices the engine (presumably one of the Silverado's factory V-8 powerplants) to make 450 horsepower. If we're talking about the truck's optional 6.2-liter V-8, that's a 30 hp jump, which HPE said comes from a cold air intake and stainless steel exhaust upgrade. Eventually, there are plans to offer the 705-hp model as mentioned in the Goliath's announcement. HPE spokesman, Jarrod Holland, told Motor Authority the truck here is only the beginning with 450 hp and there's "no tuning currently available" for the latest Silverado.

Those interested in adding a 6x6 Silverado to their lives can visit select Chevrolet dealers or order one directly from Hennessey. Ready to have your eyes water? The cost is $375,000. If there's any silver lining, that does include the cost of the donor 2019 or 2020 Silverado pickup.