While the second-generation Ford GT is the most advanced car to ever come from the Blue Oval, back in 2005, it was all about the original. The Ford GT marked the automaker's return to supercars after its GT40 motorsport program in the 1960s, and to this day, it remains a banner vehicle.

In one of Jay Leno's Garage's most informative videos, Leno invites the 2005 GT's lead designer, Camilo Pardo, on the show to discuss the ins and outs of the original supercar. What better way to learn about the car than from the man who oversaw its design? Pardo is full of obscure knowledge about the car and it leads to a wonderful conversation between the two.

The car shown is Leno's personal GT (of course) and it's the first production car that was built for a customer. The first 10 cars went to the Ford family, while car number 11 was auctioned off for charity. Leno received dibs on car number 12. His second-generation GT is also car number 12.

The first aspect of the car the two dissect is the obscure door design. The doors pull part of the roof away to leave a T-top shape when opened. Pardo recalls it took a long time to convince upper management to go with such a unique design, even though it was an element of the GT40. He says all of the top executives ended up smacked their heads on the doors when exiting the car, but Pardo and his team ultimately won the battle. 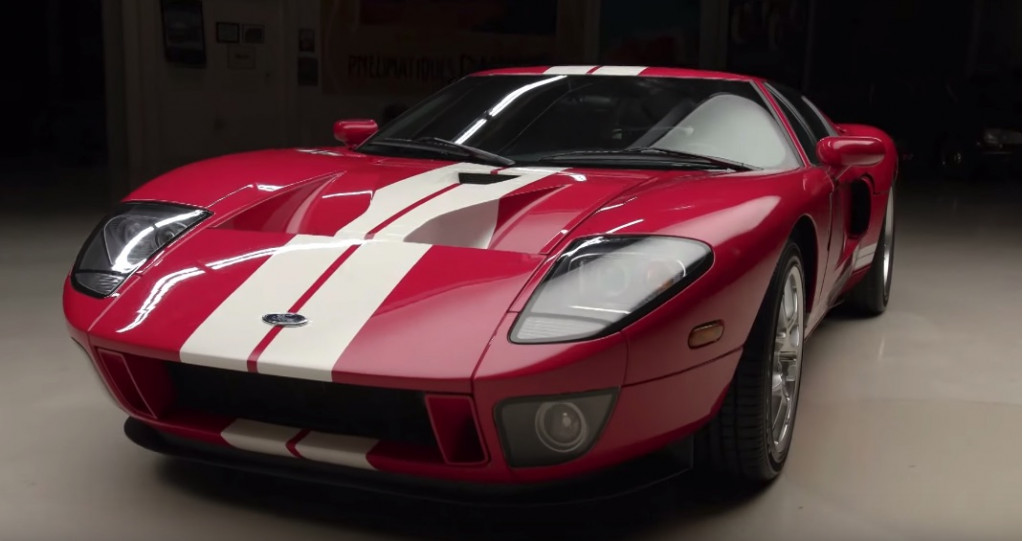 A few full-size clay models were completed over a three-year period before Ford gave Pardo's team 15 months to bring a production car to life from the concept. In that short amount of time, minimal changes occurred, even as the engineering department finished its packaging. Pardo says his team only needed to raise the car a few inches and stretch it out just a few inches longer, which kept the sexy clay model's proportions intact.

It's a wonderful story the full way through, so strap yourself in for the nitty-gritty design details of the first-generation Ford GT in the video above.