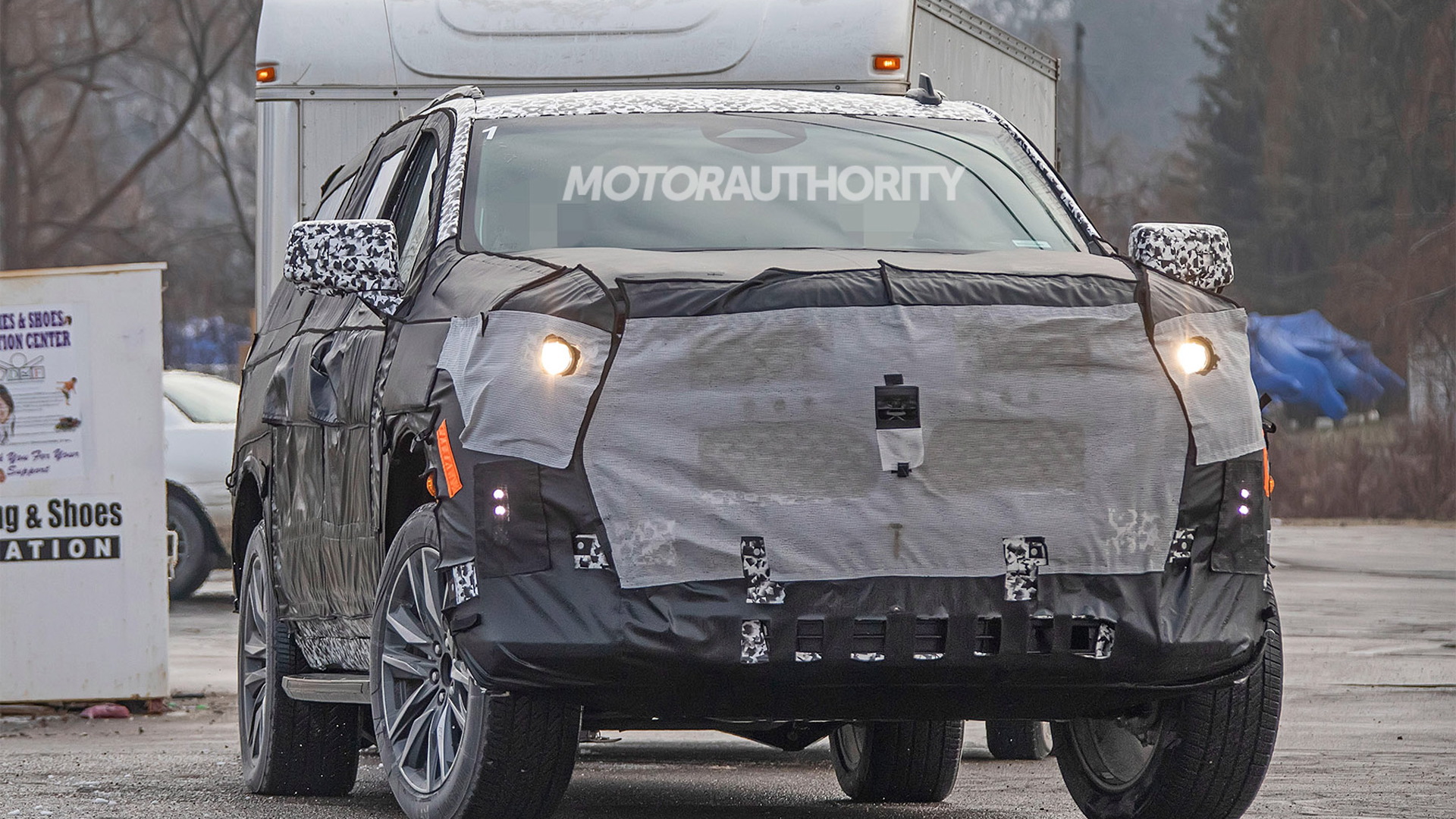 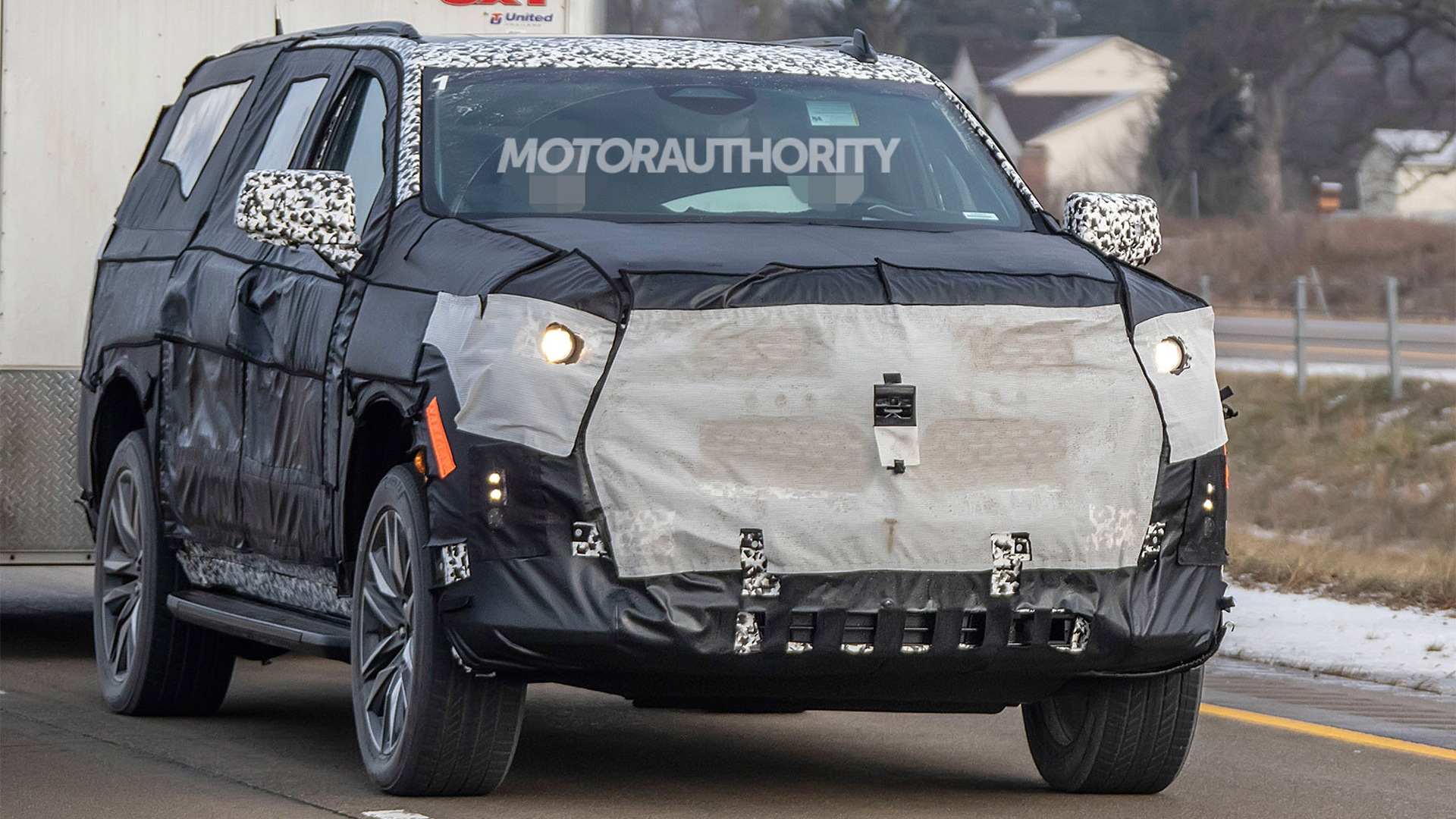 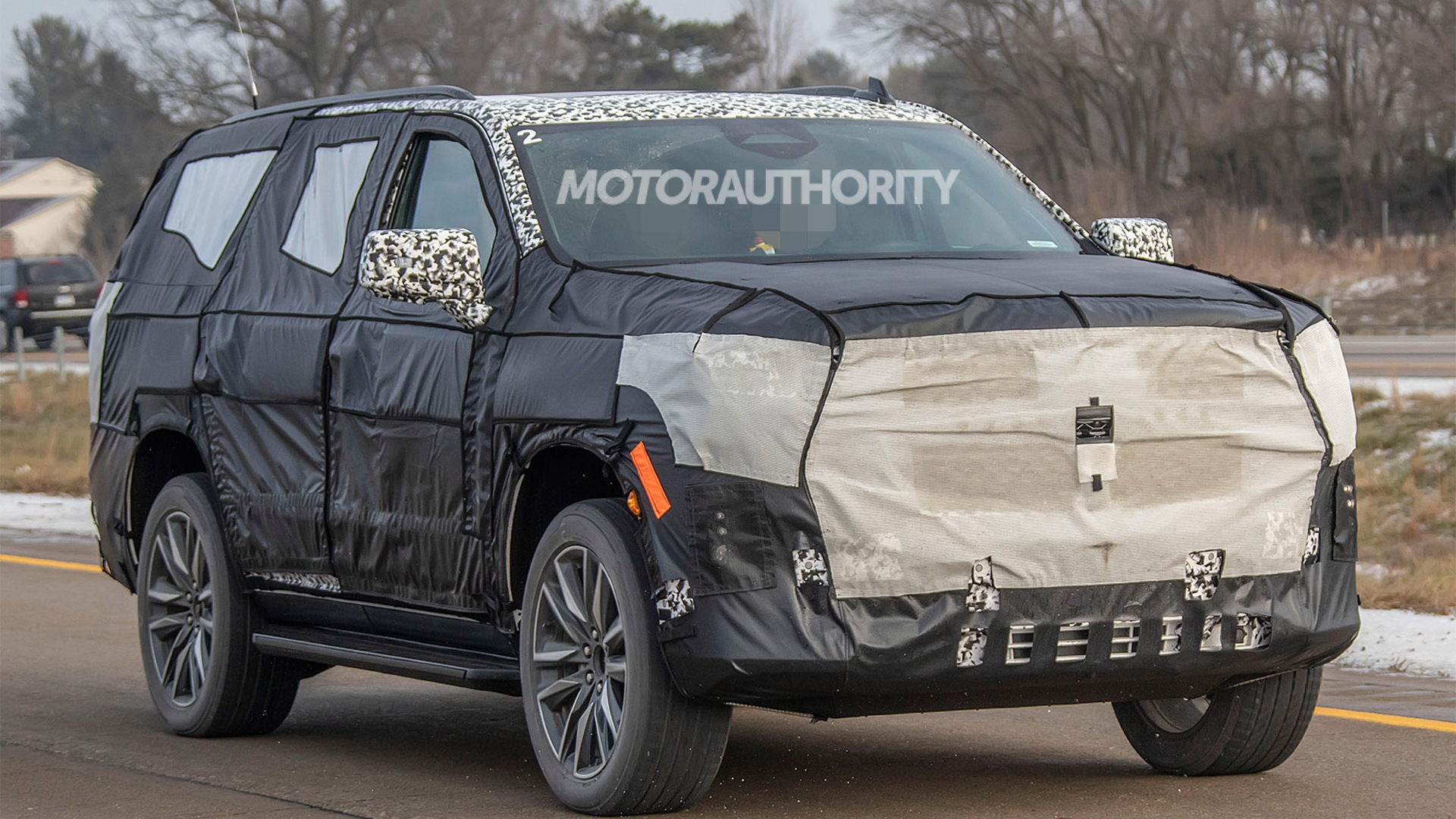 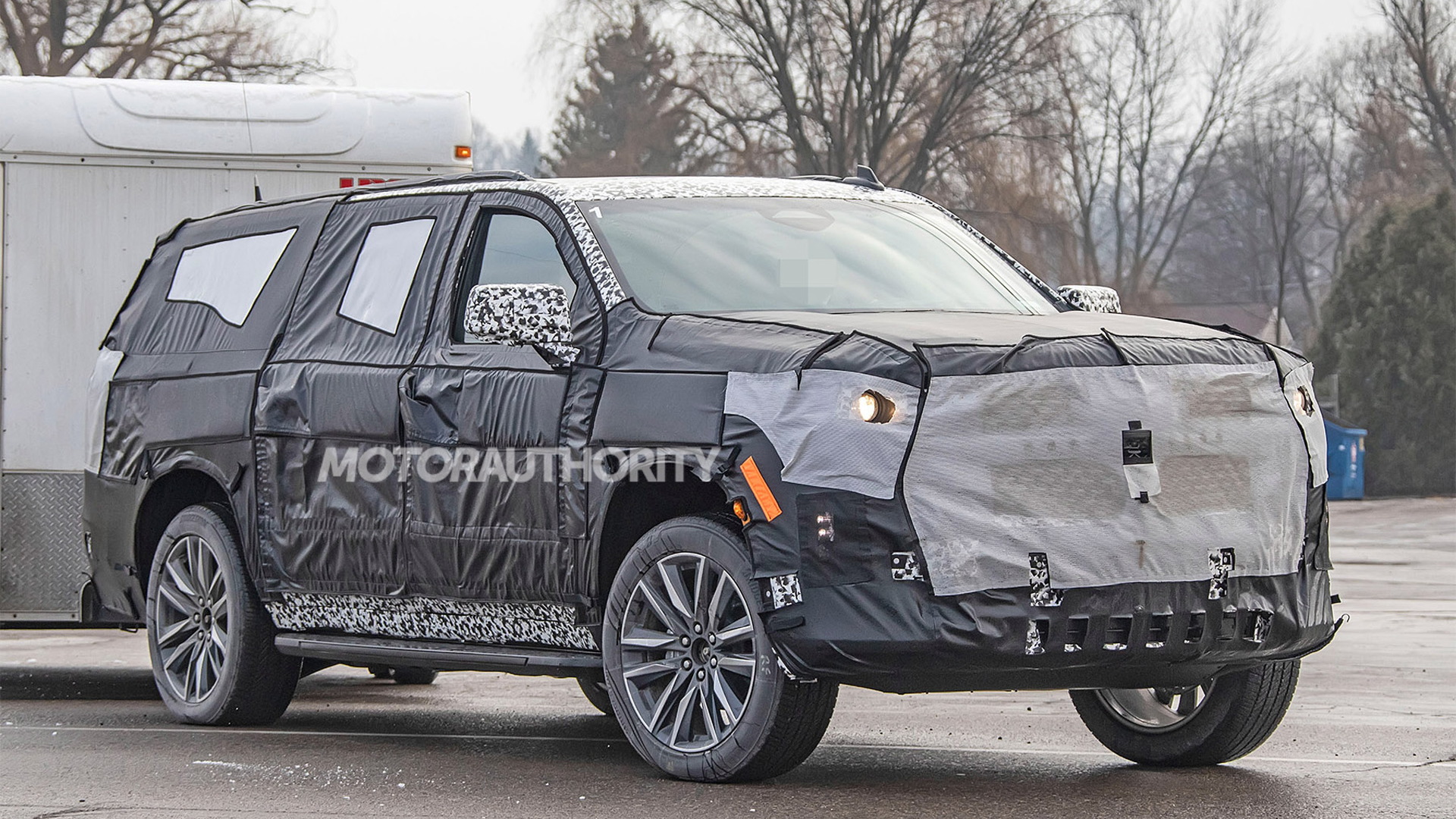 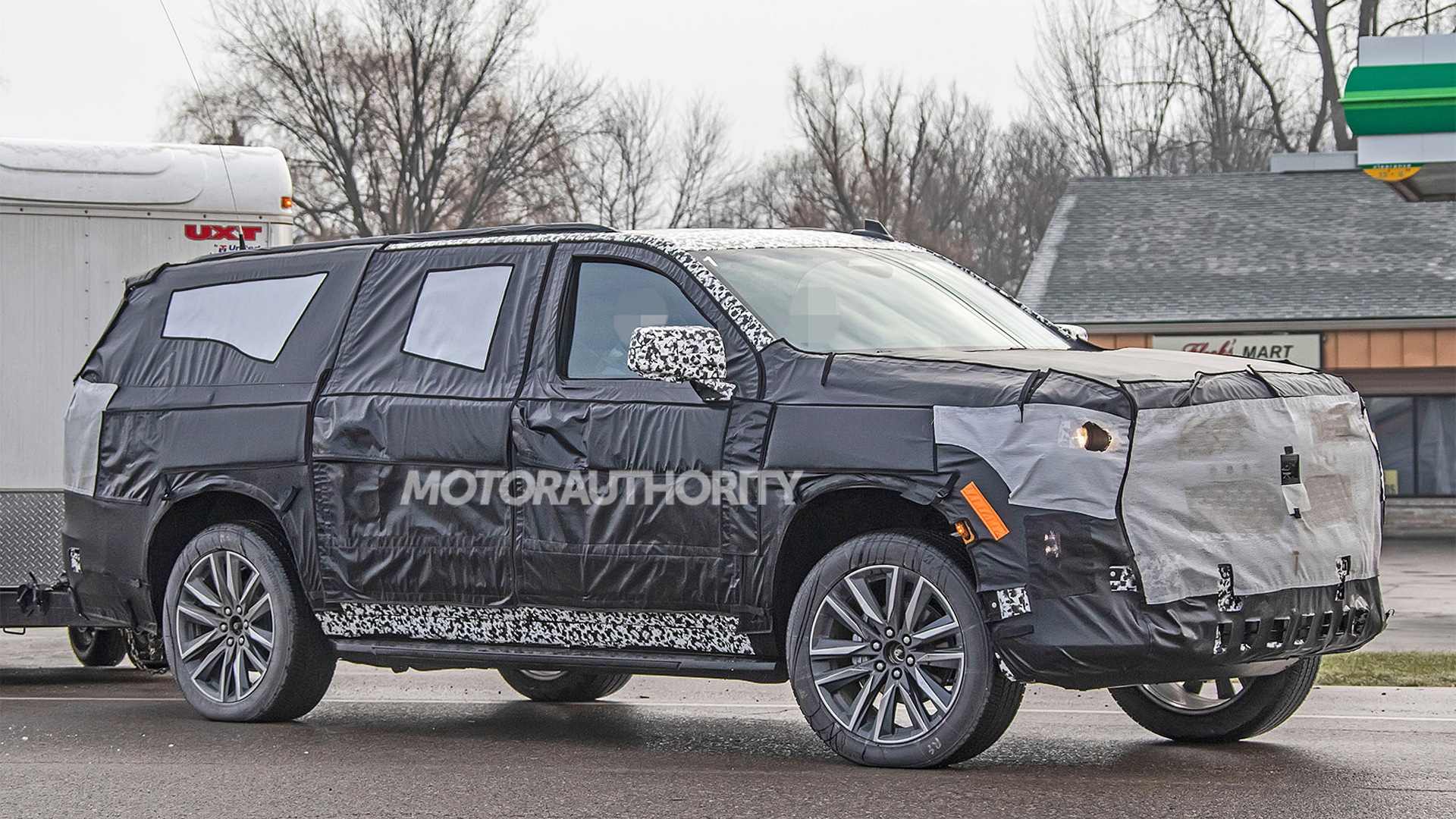 Cadillac is on track to introduce a redesigned Escalade for 2021, and a prototype has just been spotted.

The latest prototype is for the long-wheelbase Escalade ESV, and its sighting follows that of a prototype for the standard model. The ESV sports longer rear doors and the tail section has also been lengthened.

The current Escalade measures 203.9 inches long as standard and a massive 224.3 inches in ESV guise, with most of the extra length going into the second and third rows. This results in 120.9 cubic feet of storage in the ESV, versus 94.2 in the standard model. Expect similar proportions for the redesigned models.

Cadillac's new Escalade will bring major weight savings, a significant uptick in style, and loads of new technology to combat Lincoln's impressive Navigator and Navigator L. Key to this is the adoption of General Motors' T1XX body-on-frame platform for SUVs and pickups. The platform is an evolution of the current K2XX design and swaps out some steel for aluminum to shed the pounds. GM is in the process of redesigning its full-size fleet around the platform, with the 2019 Chevrolet Silverado 1500 and GMC Sierra 1500 twins the first to use it.

We hear it might help the new Escalade shed close to 300 pounds compared to the current model. The platform also brings the option of independent rear suspension, which the spy shots confirm will feature in the redesigned Escalade. This should significantly improve ride comfort and handling over the solid rear previously fitted to the luxury SUV. 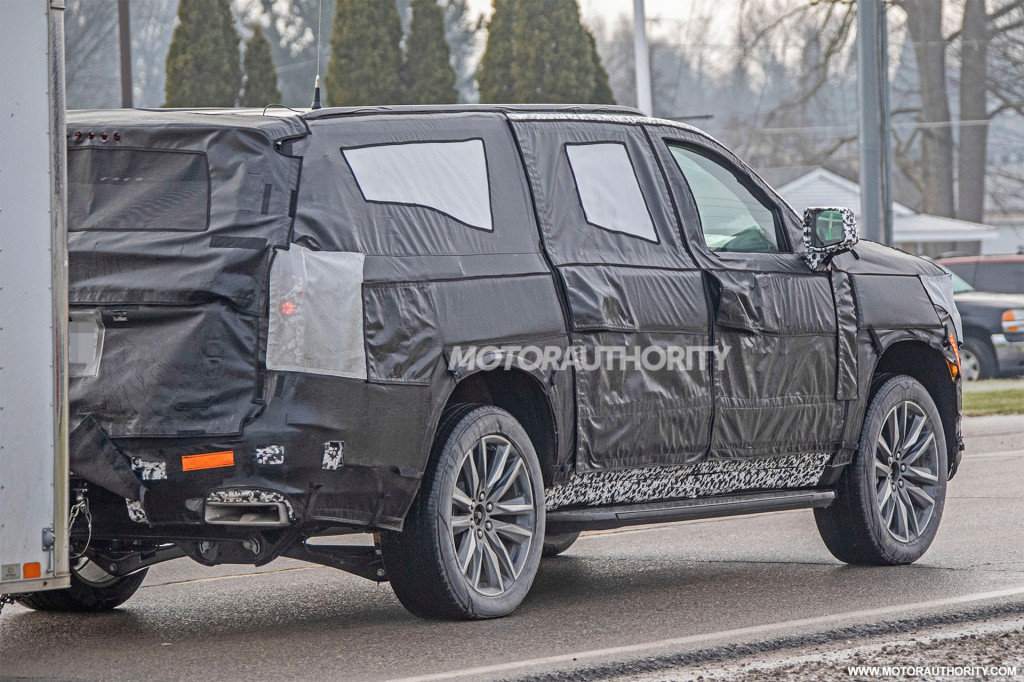 It isn't clear what Caddy has in store for the powertrains but the brand-exclusive 4.2-liter twin-turbocharged V-8 should feature in a model delivering 500 horsepower or more. A naturally aspirated 6.2-liter V-8 should also be offered, and possibly a plug-in hybrid option at some point. A 10-speed automatic will be standard and buyers will be able to chose between rear- and 4-wheel drive.

On the outside, it appears the Art and Science design language isn't fully dead just yet but the latest Cadillacs, including the redesigned Escalade, adopt the more evolved look first shown on 2016's Escala concept car. The Escala's mesh pattern for the grille can also be seen poking through some of the camouflage gear. The taillights still run vertically up the rear fenders, although camouflage disguises how far they will run up the rear pillar.

A side mirror design unique to the Escalade prototypes seems to be in play, encompassing additional sensors, likely for Cadillac’s SuperCruise partial self-driving feature that will certainly make its way into the flagship SUV.

The new Escalade should bow in late 2019 or early 2020 before starting sales the following fall. The fifth-generation model is one of five new or redesigned models Cadillac will introduce through the 2020 calendar year. The first was the XT4 compact crossover, which has since been followed by the new XT6 mid-size crossover, CT4 small sedan and CT5 mid-size sedan.

It's too early to talk pricing but a starting figure approaching $80,000 is likely. The pricier ESV could see the Escalade enter six-figure territory for the first time.