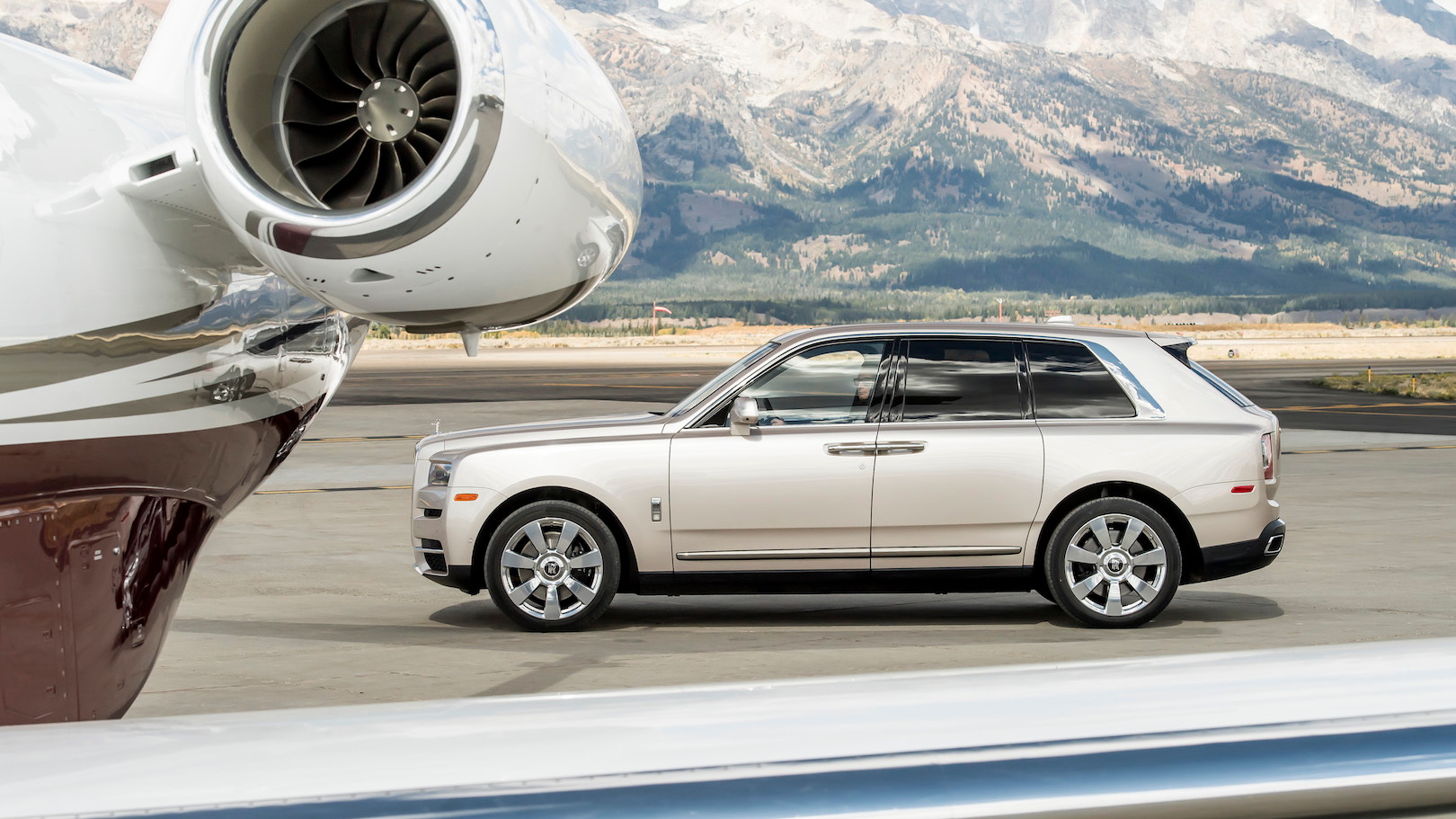 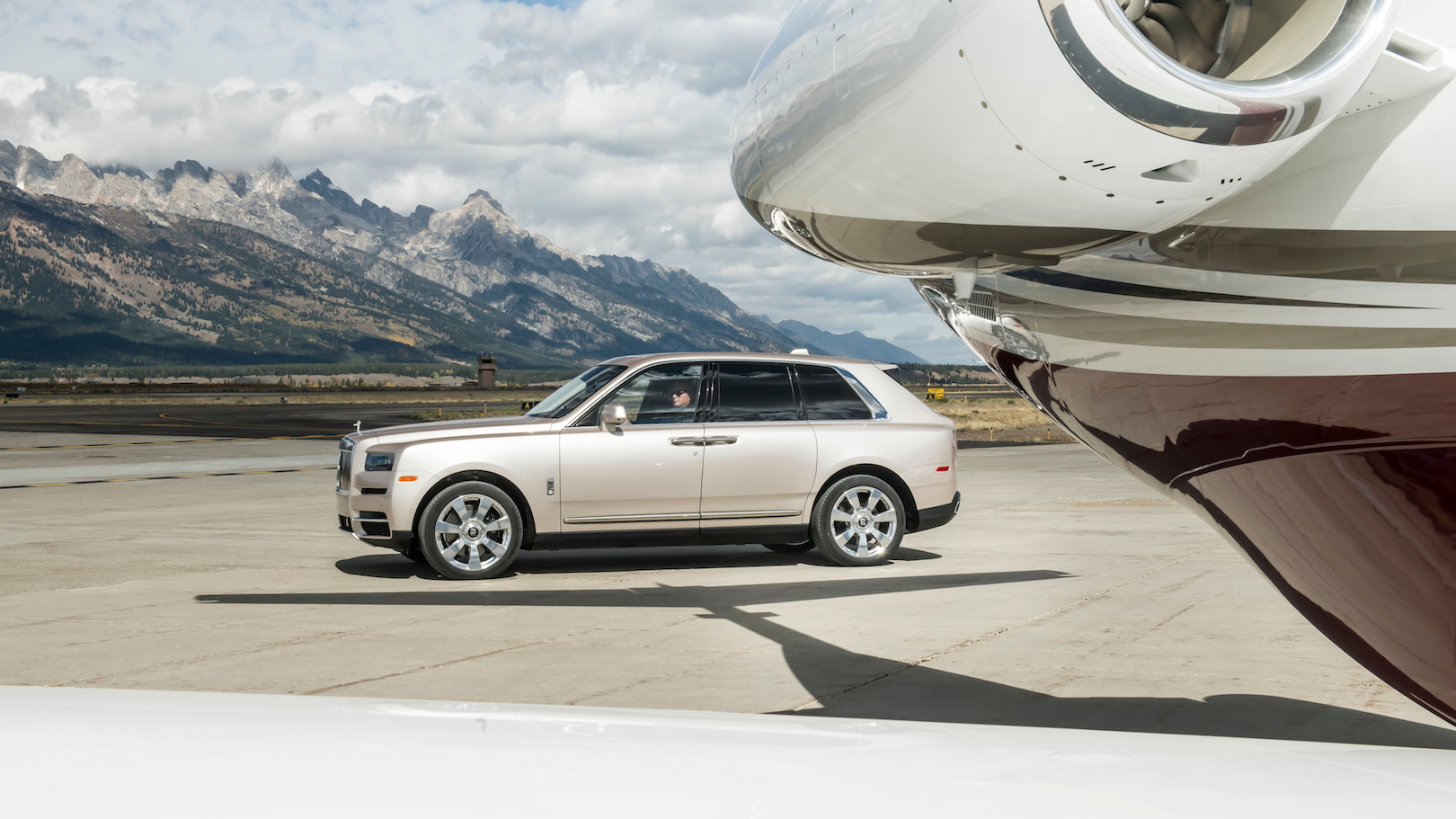 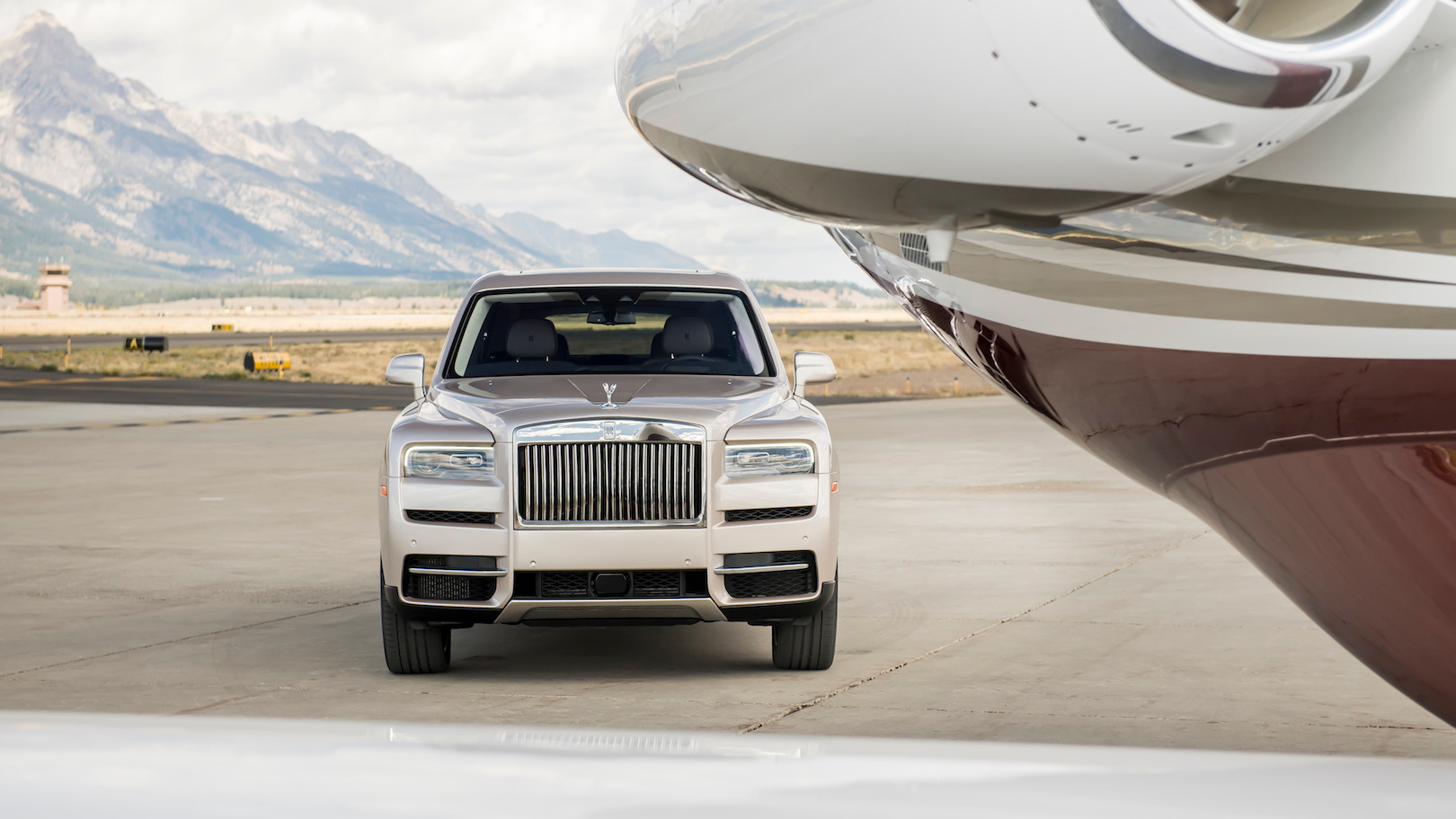 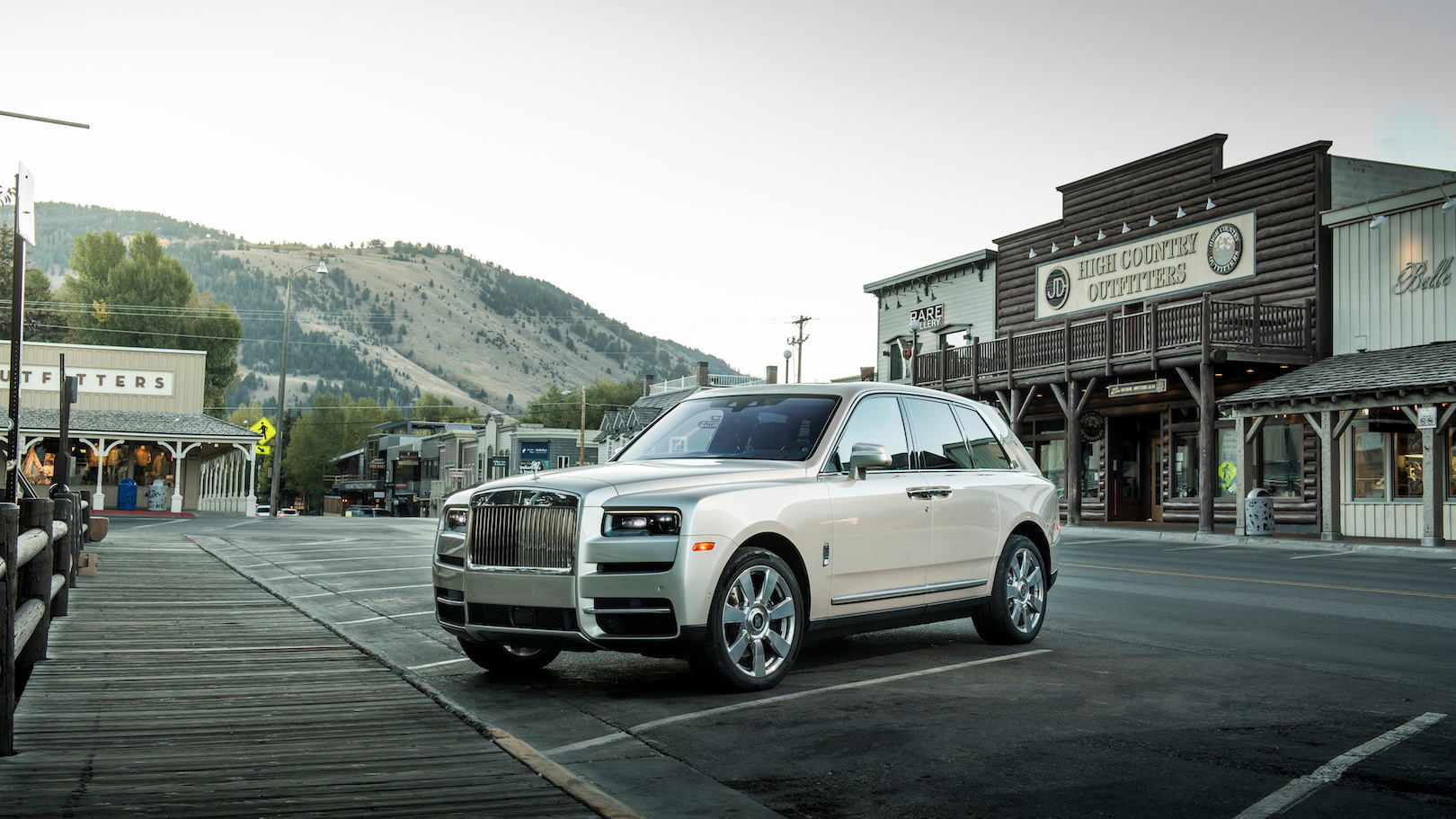 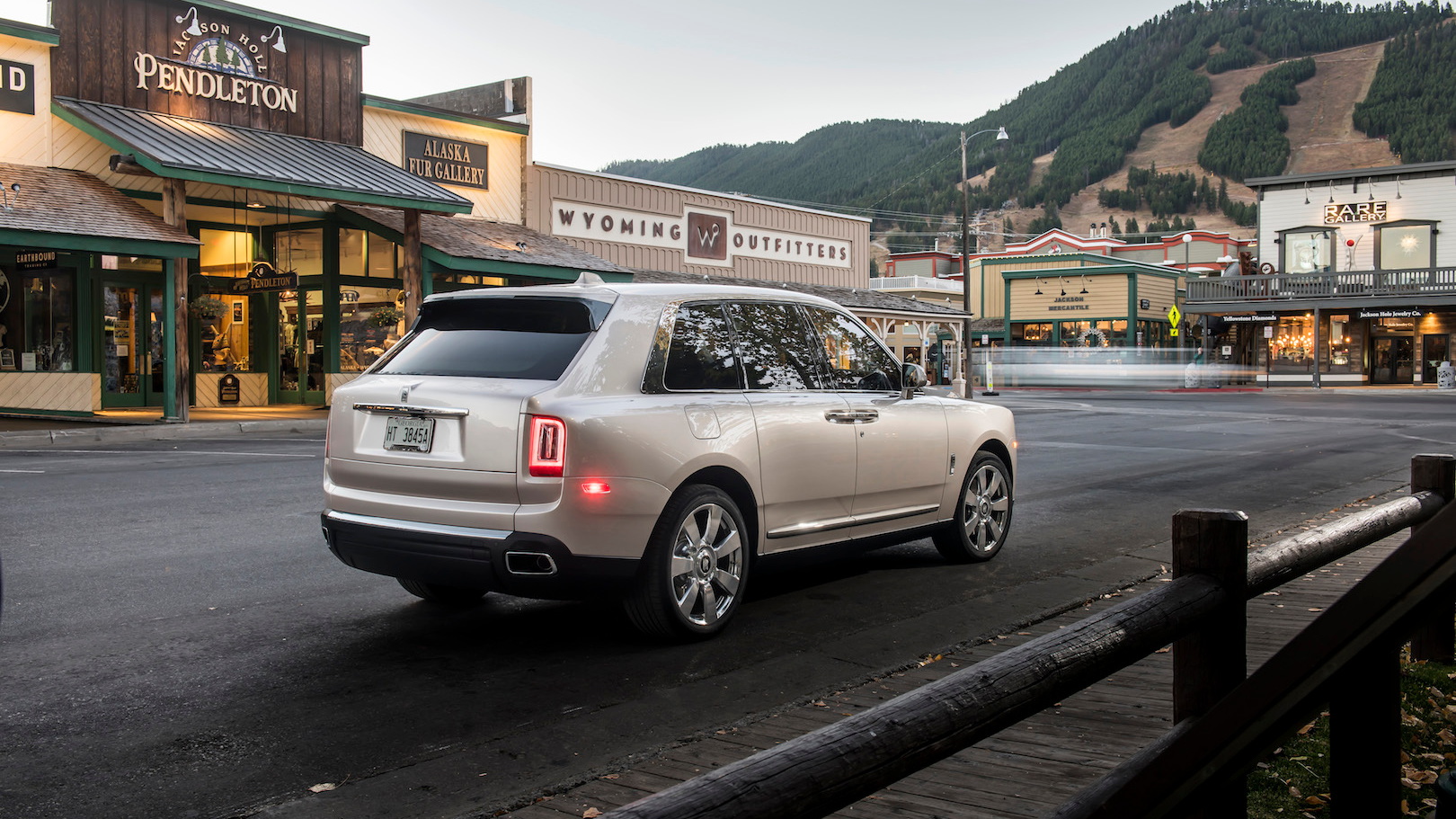 In Jackson, Wyoming, things get a little weird. More than a half a million people live in the entire state, most of them in modest small towns never far from staggeringly beautiful wilds.

Jackson’s the same, just different. It's filthy rich, overrun by Cheneys and Gateses and their ilk. The working cattle ranch next door might belong to Harrison Ford—or Kanye West, who took the cover photo on this year’s "Ye," basically from his doorstep.

Jackson’s rolling in prosaic pickups and Subaru Outbacks, too. We’ll guess that, soon, it’ll be rolling in Rolls-Royce Cullinans.

With the Cullinan, Rolls-Royce doesn’t just have its first SUV. It also has the most ingenious tool for prying ultra-wealthy drivers from their Range Rovers and Bentaygas, which we assume have now been rendered hapless scrap. The Cullinan lays claim to plenty of firsts and bests, with one big most thrown in: at $325,000 in standard trim, it’s the most expensive SUV offered by a mainstream manufacturer. 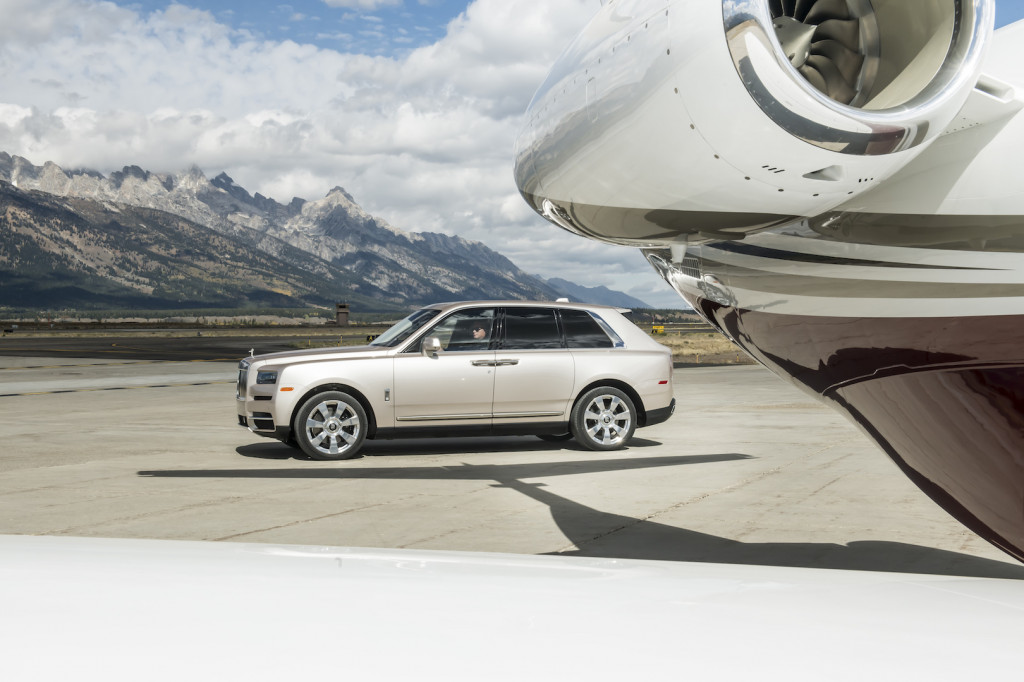 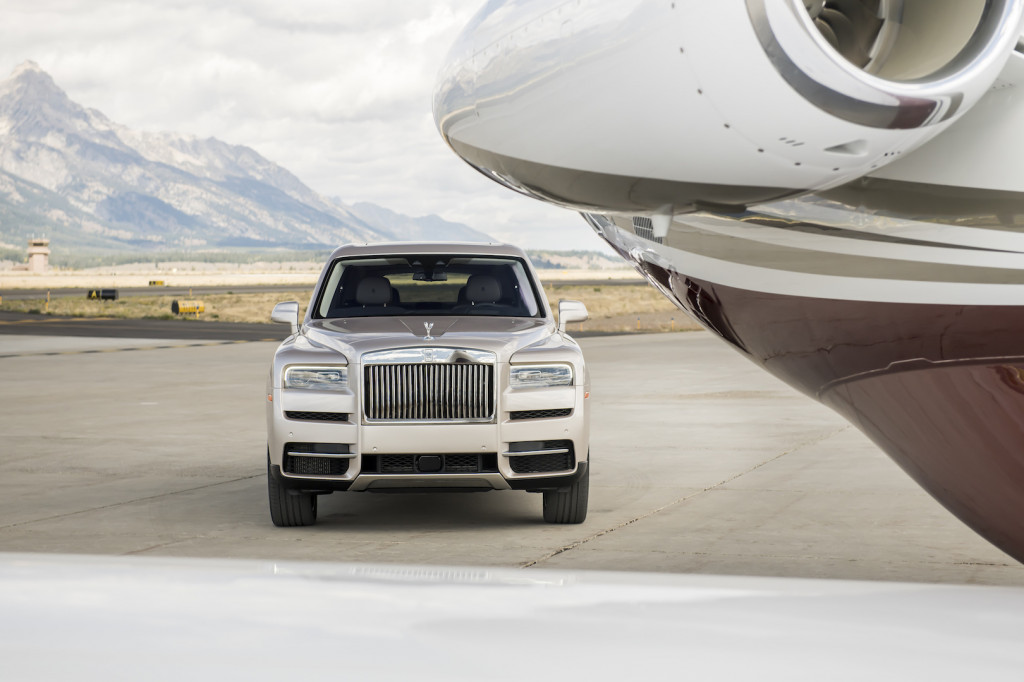 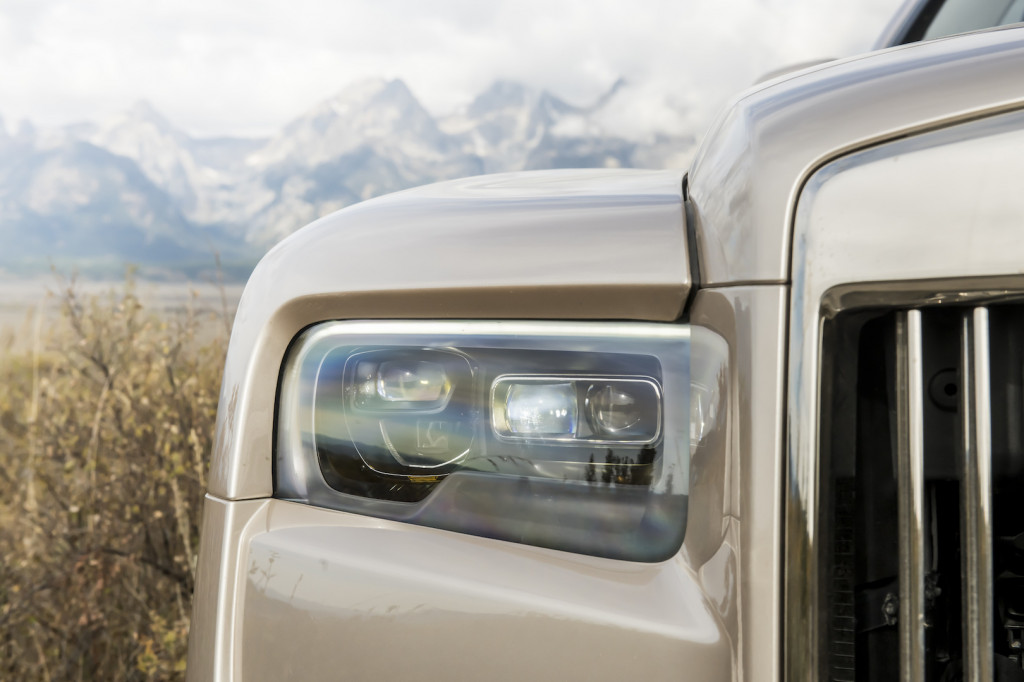 We enthusiasts throw shade at SUVs when we call them flying bricks, and the Cullinan totally calls us on our bullshit. Its front end’s as flat as a marquee board, ring-lit to an Instagram sheen. The rear roof pillars could hold up a beachfront home. The midsection’s built like a powerlifter. It shouldn’t work well, but it does, exceedingly.

Yes, the Cullinan—it’s named for the 3,107-carat diamond mined in South Africa and sent to the British crown as a colonial spoil—wears its immense ribbed grille without a single pang of guilt. Rolls believes the Cullinan has “the prominent brow of a Saxon warrior,” something we wish the public would recognize in our visage. (Our hubris limiters stopped working at Wyoming’s lofty altitudes.) Its rugged, square-rigged roofline ends in a subtle wing that hides a wiper blade. A slight rear decklid lends a bit of the classic London-taxi shape, bracketed by tiny rectangular taillamps.

Coach doors part way at the middle of the car to expose an interior built around a massive twin-binnacle dash, wide swaths of digital displays, and somewhat less of the formal wood and chrome trim than in other Rolls-Royces, though they’re certainly available on order.

The austerity of a Range Rover is nowhere to be found here, except maybe in the digitally rendered gray-on-black instruments. Woodwind-style metal window switches grace the door panels, and the dash wears leather stamped with the texture of a pricey piece of luggage. The dash cap’s composed of leather shoulderpads and the entire cabin’s wrapped in wood trim cut from a single roll of veneer.

That’s a bare description for what’s really a bare canvas. Rolls pairs Cullinan drivers with Cullinan designers to plot out custom-trimmed vehicles; some drivers even bring “look books” with ideas that can be interpreted by the designers into whimsical flourishes of fashion—a glovebox lined in turquoise leather, seats piped in peppermint green, or a zebra-striped wood dash framed in mandarin orange leather. 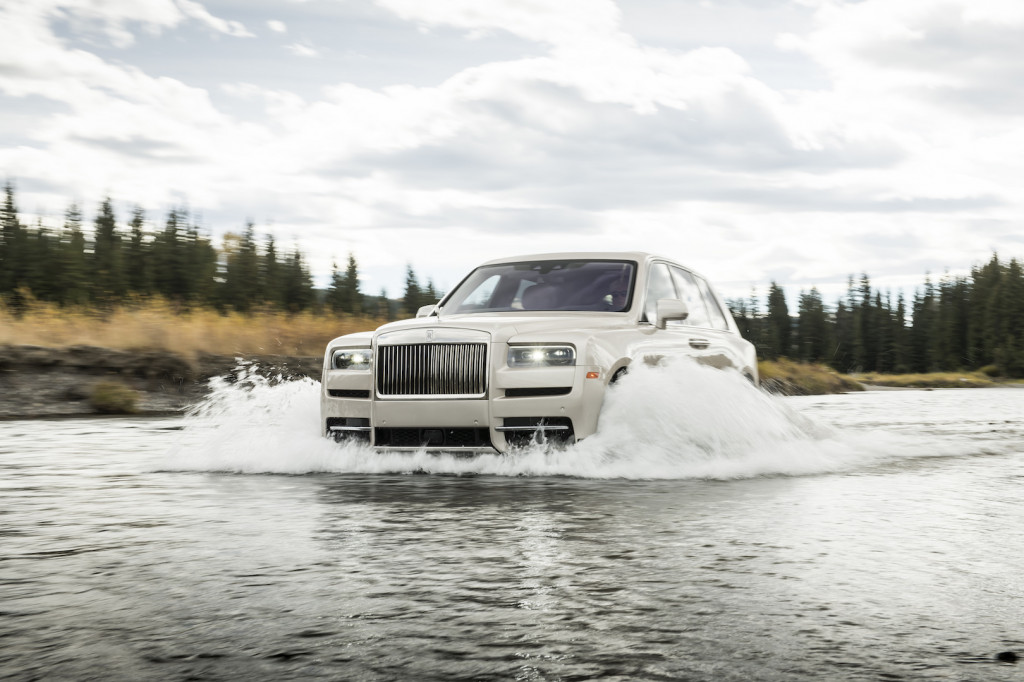 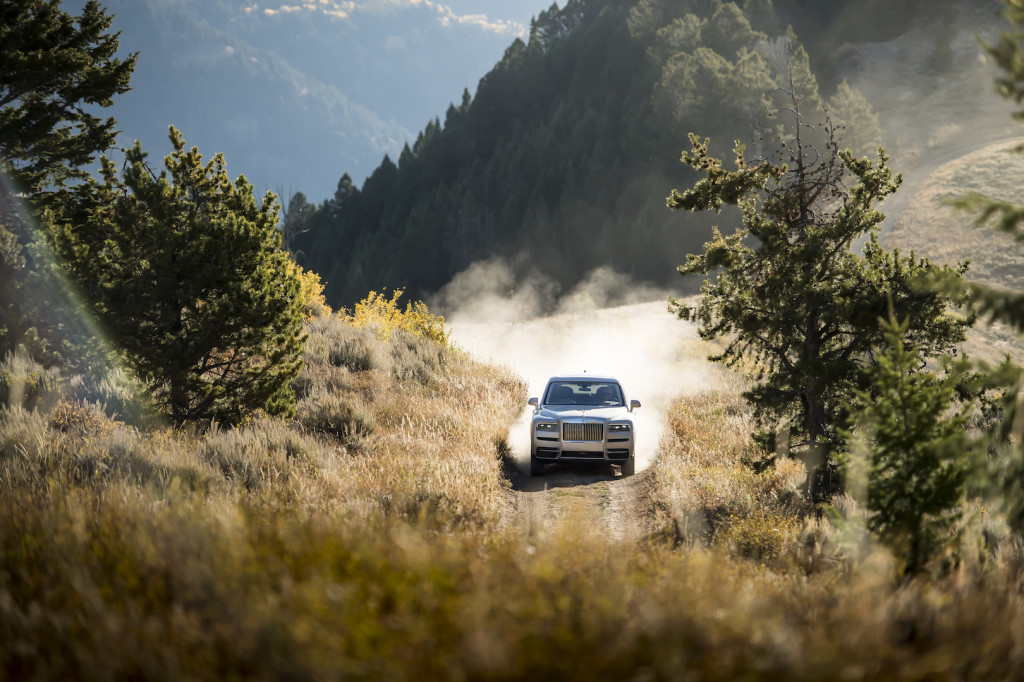 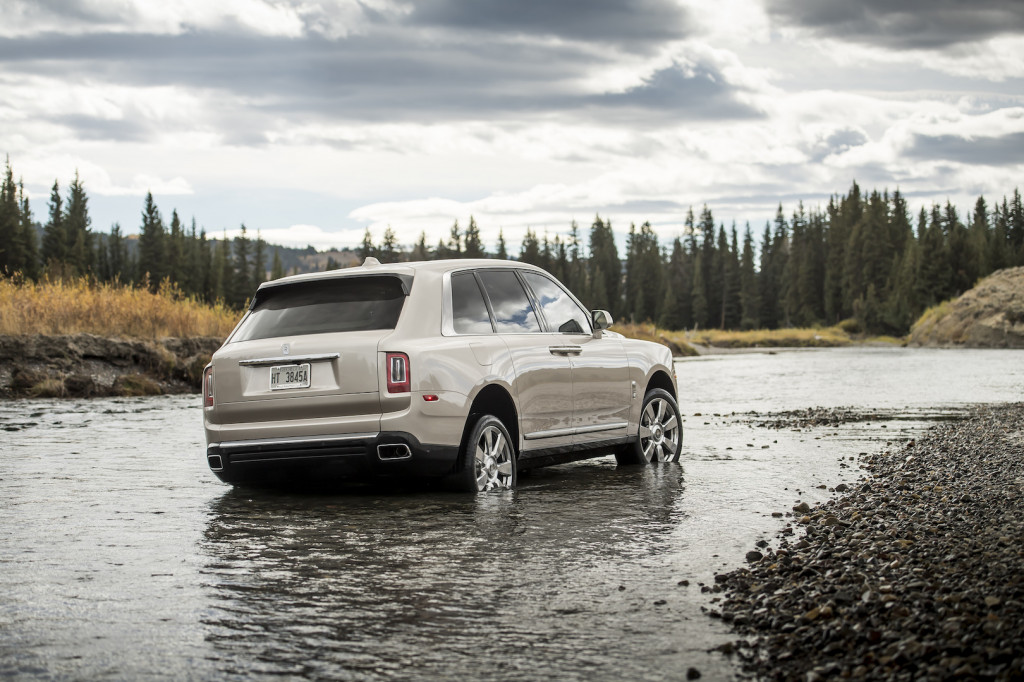 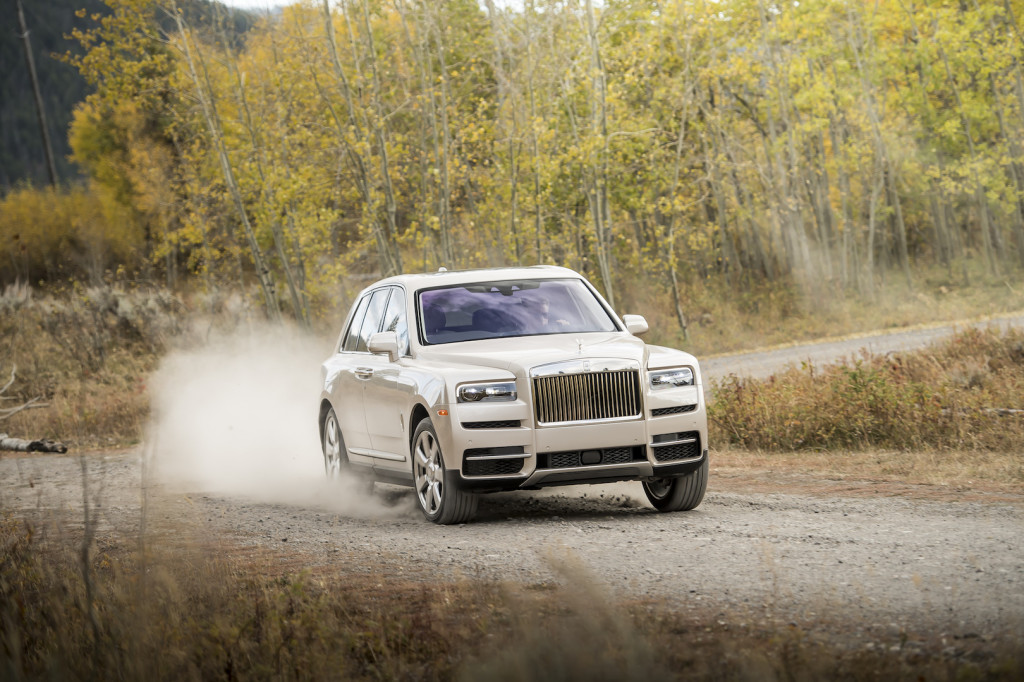 From the view over the tall, long-nosed hood, the Cullinan attempts to divorce its occupants from the outside world as much as possible. It’s an amicable split.

The first four-wheel-drive Rolls-Royce wagon demands copious power just to motivate its 6,069-pound curb weight out of its parking space. The Phantom’s twin-turbocharged 6.8-liter V-12 sates that need. With 563 horsepower and 627 pound-feet of torque, developed as low as 1,600 rpm, the V-12 arrows the Cullinan through the air at a hugely respectable pace. It consumes just 5.0 seconds in the rush to 60 mph and vaults to a 155-mph top speed.

The assertive push that presses passengers in their seats comes with just a distant ripple of V-12-induced whir. It wouldn’t take much to transpose the Cullinan’s light dose of engine music into an electric-car key. (Though there’s no talk yet of other powertrains, the architecture is designed to host different propulsion systems, like a plug-in hybrid that’s sure to come.) It’s so quiet, you have to study a spec sheet to realize the Cullinan has an 8-speed automatic. The shifts could be happening in another car. Or next door in Idaho. Who knows what goes on over there.

The Cullinan balances power front to rear with all-wheel drive, slightly biased to the rear at a nominal 40:60 power split. It can shift 90 percent of torque to the rear wheels, but it has no differential locks and no true torque-vectoring; it relies on anti-lock braking to damp down excess wheelspin, and hill descent control that toggles from 2 to 18 mph to handle the downhills.

Can it off-road? The toboggan trails and rocky but mostly dry dirt trails we overtook check that important SUV box, but the Cullinan’s not endowed with the harder-core controls of a Range Rover. There’s an “Off-Road” button on the console that can toggle through six traction modes (snow, wet grass, sand, rough trails, mud, and gravel) and it can wade through about 21 inches of water, but intense rock-crawling just isn’t the Cullinan’s game. Air springs add just 1.6 inches to the Cullinan’s 5.7 inches of ground clearance and 21-inch summer tires are standard.

No, the Cullinan’s an all-weather wagon at heart, and it’d rather think out the traction plan for you than have you fret about it. Those big air springs team with adaptive dampers and a multi-link suspension to absorb big breaks in the ground (or pavement), and dissolve them into slight jostles that move through the cabin unnoticed, like a 2.5 earthquake in L.A.

The heavy emphasis is on unflappable ride control, and the Cullinan has it. The same self-leveling air suspension that can lower or raise the vehicle as it courses over pavement, or as it slogs through trenches, can push down on individual wheels when they spin, to reinstate grip. There’s no Sport mode to dial in a firmer ride, and instead, the Cullinan cruises along, almost oblivious to the conditions of the world beneath it.

Despite all that, the Cullinan steers with the feather-light but accurate touch you’d expect from a vehicle with a large-diameter steering wheel, lots of electric steering boost, and rear-wheel steering that can counter-steer rear wheels up to 3 degrees at speeds of up to 54 mph. The Cullinan changes direction crisply, dives into curves with plenty of body lean, but maintains poise all the while.

Not palatial, but far from humble

At 210.3 inches long, with a 129.7-inch wheelbase, the Rolls-Royce Cullinan is shorter than the Phantom sedan, but seats four or five people all the same, depending on whether it strips out the standard three-seat bench for a pair of lusciously tailored buckets with heating, cooling, and magic fingers.

Touch the key fob button twice, and the Cullinan lowers itself on a knee, for easier access. It’s a people pleaser.

It’s 72.3 inches tall and 78.7 inches wide, both slightly taller and wider than a popular minivan such as the Honda Odyssey, but the Cullinan has somewhat narrow space for front passengers, thanks to a door panel outset and a console that flares out. The cabin’s awash in natural light through a panoramic glass roof. Unnatural light will have to wait: Rolls’ signature Starlight roof is not initially available, but it’s due soon. (Total rabbit hole, but worth it: Buyers can already configure the Starlight roof in other Rolls-Royces to depict a specific sky on a specific date in a specific place on the globe; soon the Starlight roof will display subtle “shooting stars” that will streak across the headliner.)

Passengers ascend into the rear seat with a slight step up through rear-hinged doors, which like the fronts, can be power-closed at the touch of a button. We spent a few hours cosseted on cooled and heated chairs that extended a footrest, offered up chilled beverages, tipped a power-operated work table in our direction and handed over the infotainment controls as if we were co-piloting a 787. Double-layer acoustic glass and foam sprayed everywhere and a glass panel that closes off the cabin from the cargo hold blot out everything that’s not liquid. It’s exceedingly quiet inside. Spouse-berating-spouse-through-pursed-lips quiet.

The rear seats power-fold down at the tap of a button. Rolls hints one can carry longer items in this state, objects which might include (checks notes) a previously unheralded Mark Rothko canvas or an architectural artifact claimed from a recent dig. But what about a heretofore hidden cache of Beanie Babies? They’re mum on the subject. 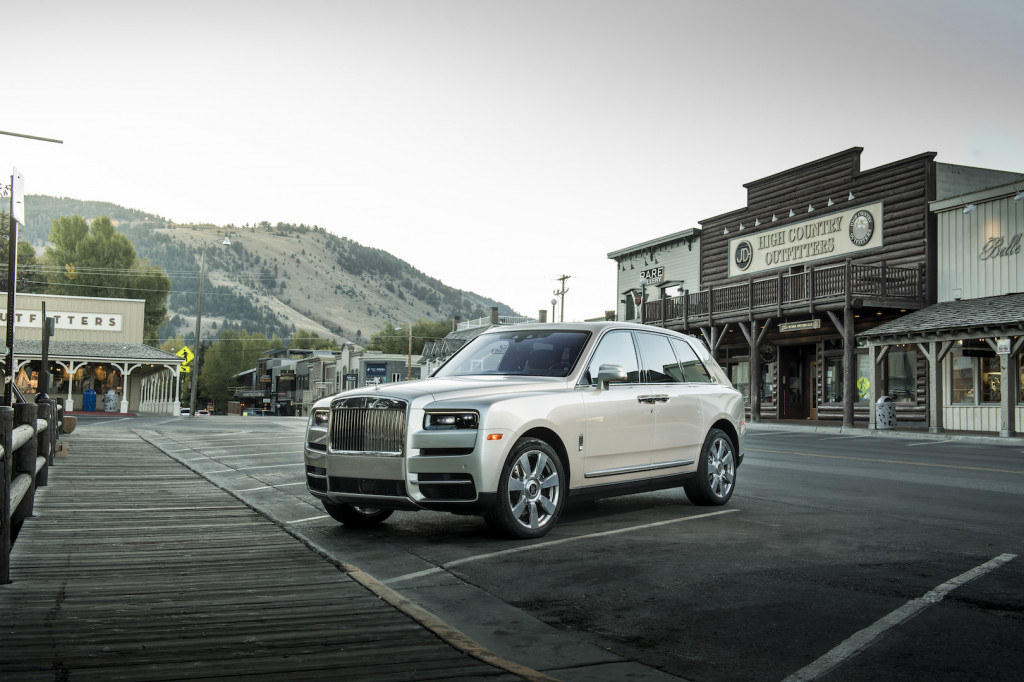 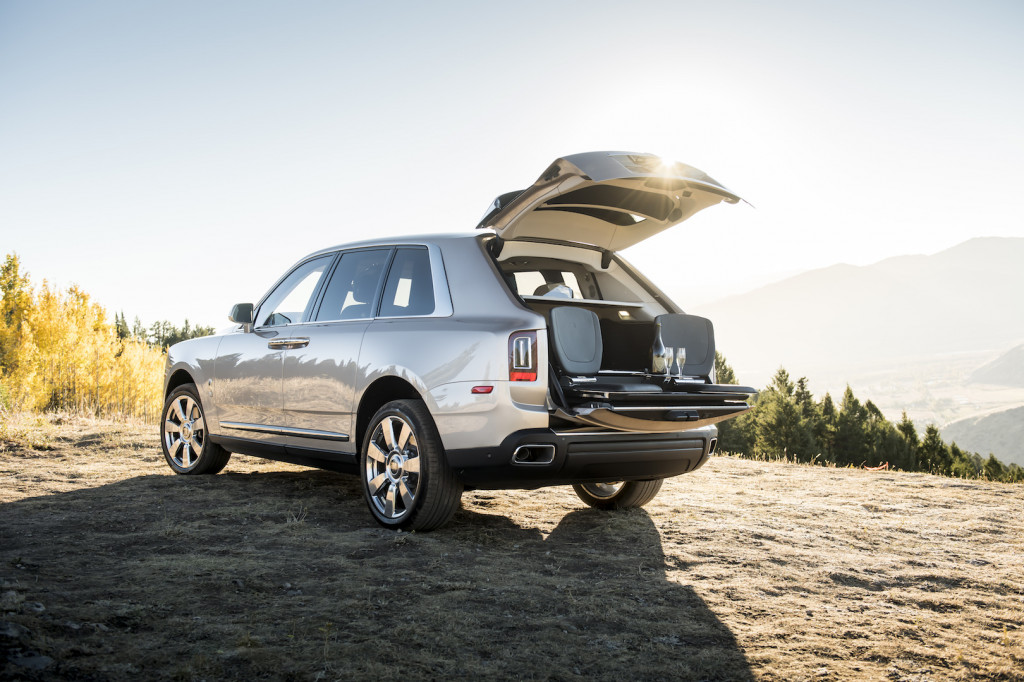 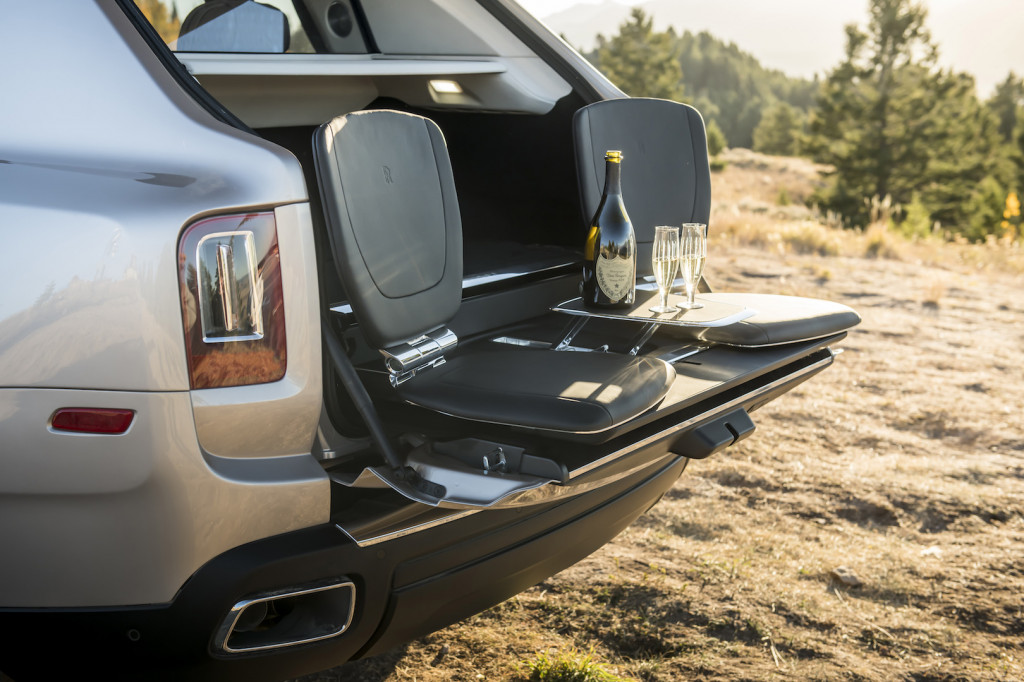 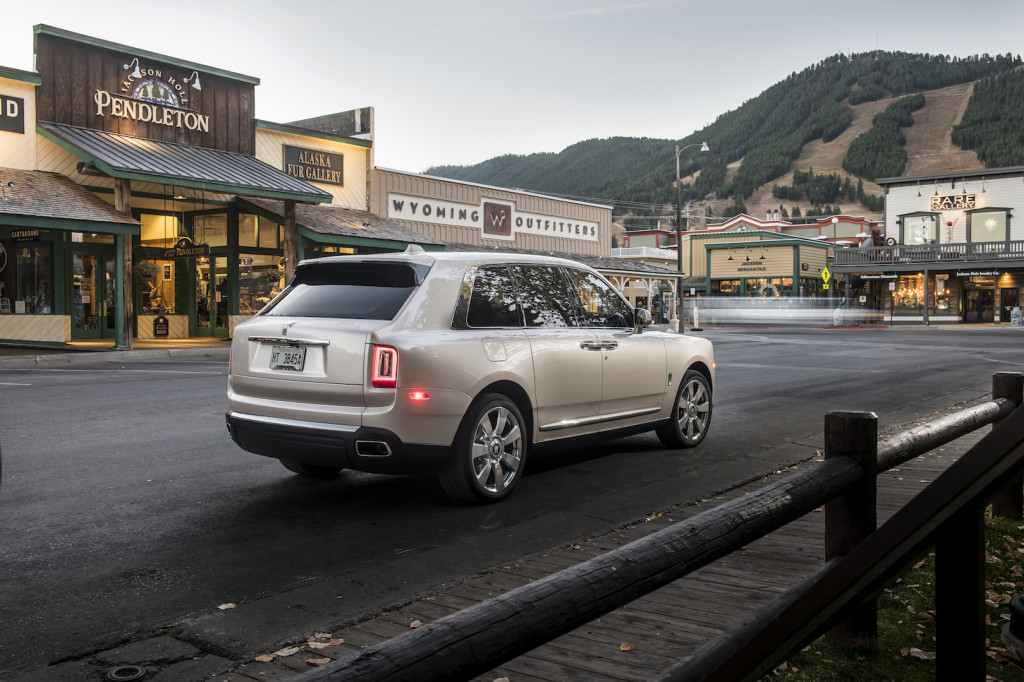 A diamond out of the rough

Rolls adopts the latest safety technology on its maiden SUV voyage. The Cullinan has forward-collision warnings with automatic emergency braking, night vision, attention assist, a surround-view camera system which comes into its own on off-road trails or in parking spaces rendered tight by the Cullinan’s size, adaptive cruise control, lane-departure warnings, and a head-up display. Wireless smartphone charging and navigation come standard as well.

A Bentley Bentayga or a Range Rover may be a rival for the Cullinan, but those vehicles represent a bargain in contrast to the Cullinan’s base price of $325,000, which doesn’t include gas-guzzler tax or destination of about $2,500. That price doesn’t include the myriad custom wood, leather, metal, and paint choices, or an audio system designed in-house.

It also doesn’t include custom luggage made to fit the Cullinan—or activity kits built to load neatly into the cargo bay. Rolls-Royce suggests it can package gear for drone racing or base jumping, but those fold-out picnic seats and snack table are an early favorite (and preferable to leapy splatty death in almost all scenarios).

The most expensive option is the executive rear-seat package, which includes a whisky decanter and glasses, and a champagne chiller with flutes. A personalized key and an umbrella that stows in the door jamb seem almost sensible.

The Cullinan diamond, were it discovered today, might be worth $2 billion. That’s a tenth of the net worth of some of the people who will be driving the Cullinan SUV in the near future, right here in Humbletown, USA. In Jackson, the Cullinan threatens to become the Subaru Outback of Rolls-Royces, and that is a high compliment paid. Outback drivers are often wealthy, and they aren’t embarrassed to spend less.

With the Cullinan, they won’t need to be shy about spending more.

Rolls-Royce flew us to Wyoming to drive the Cullinan, paid for hotel and food, and got us out before it snowed, for which we are eternally grateful.