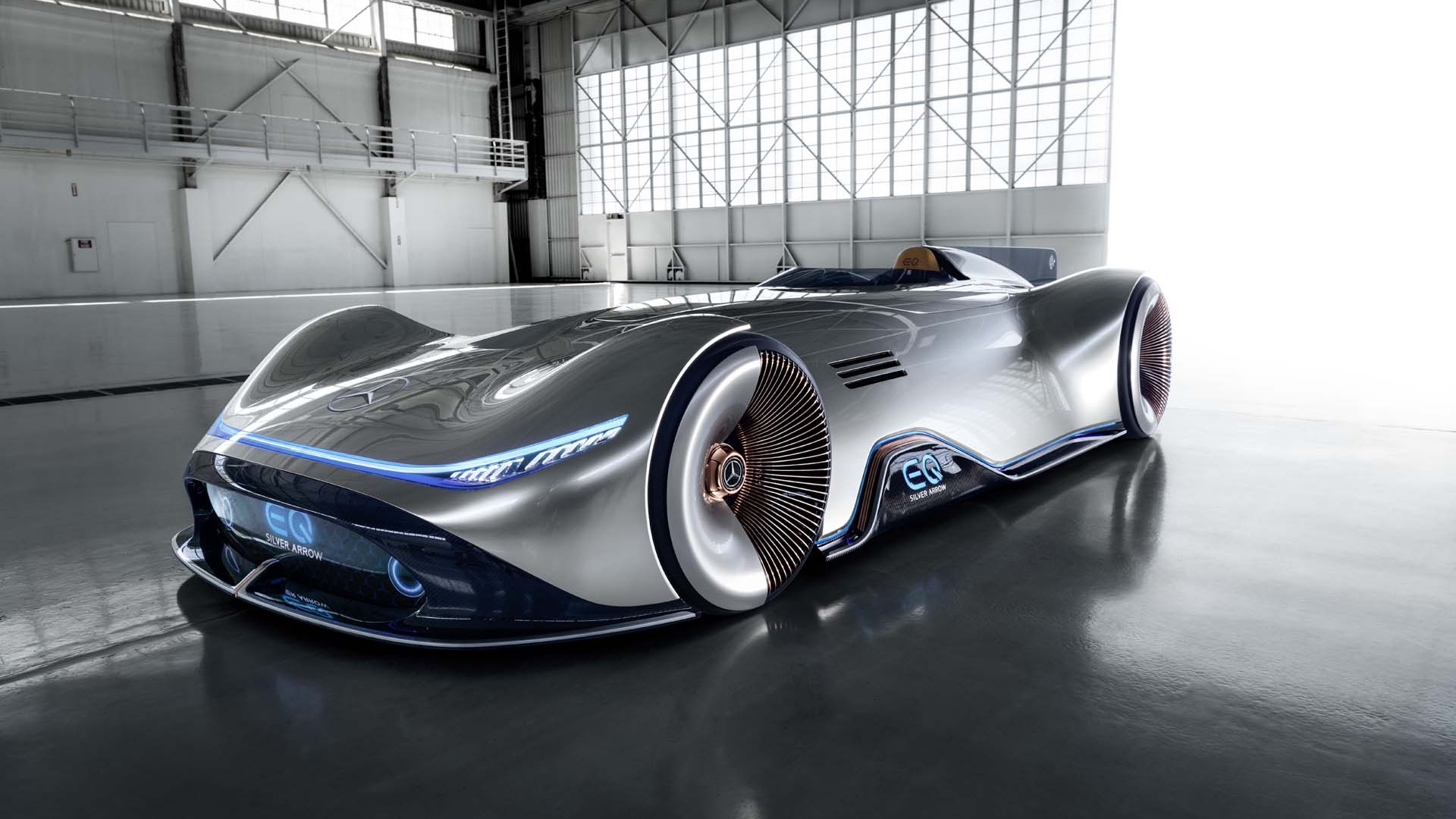 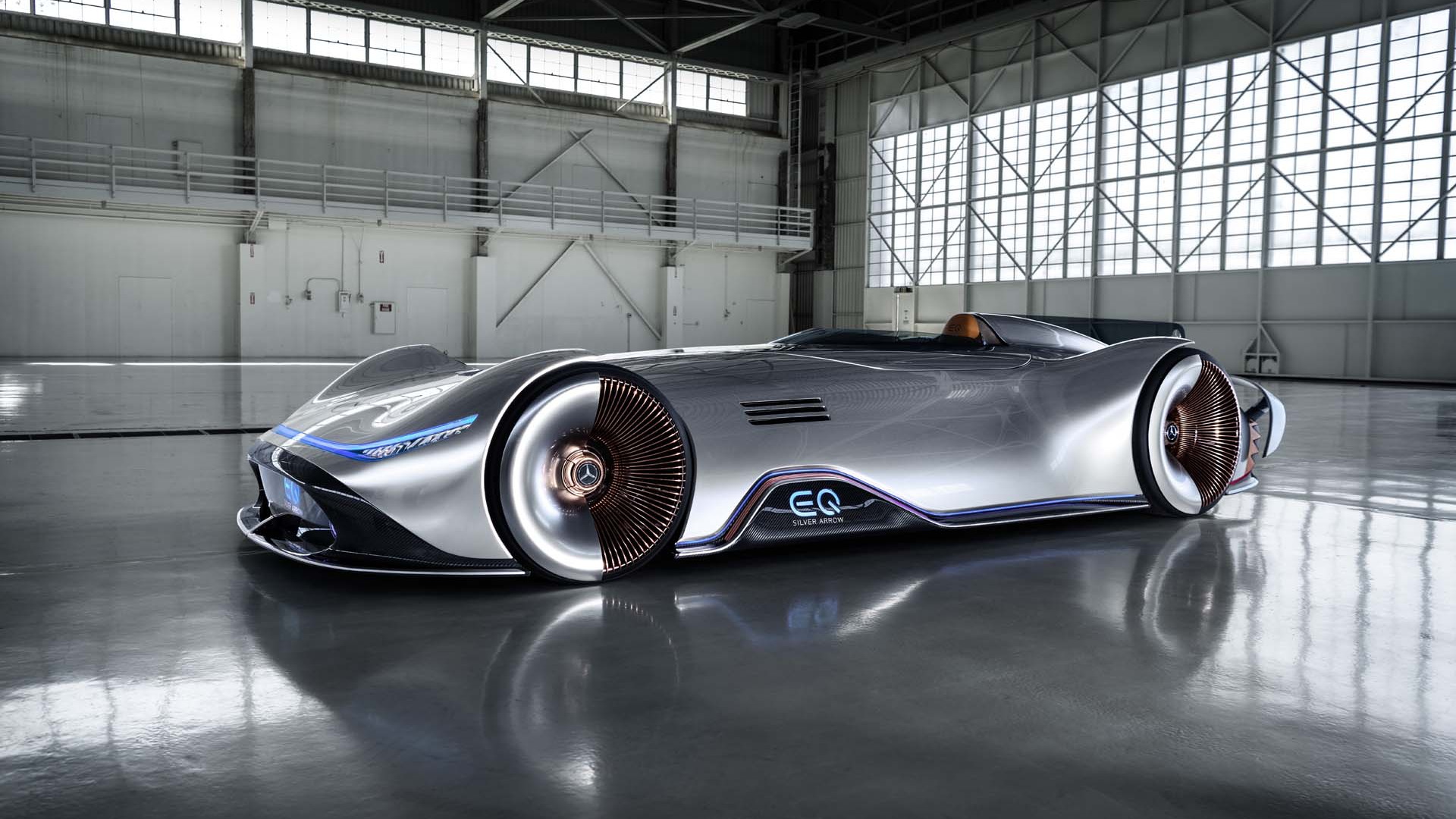 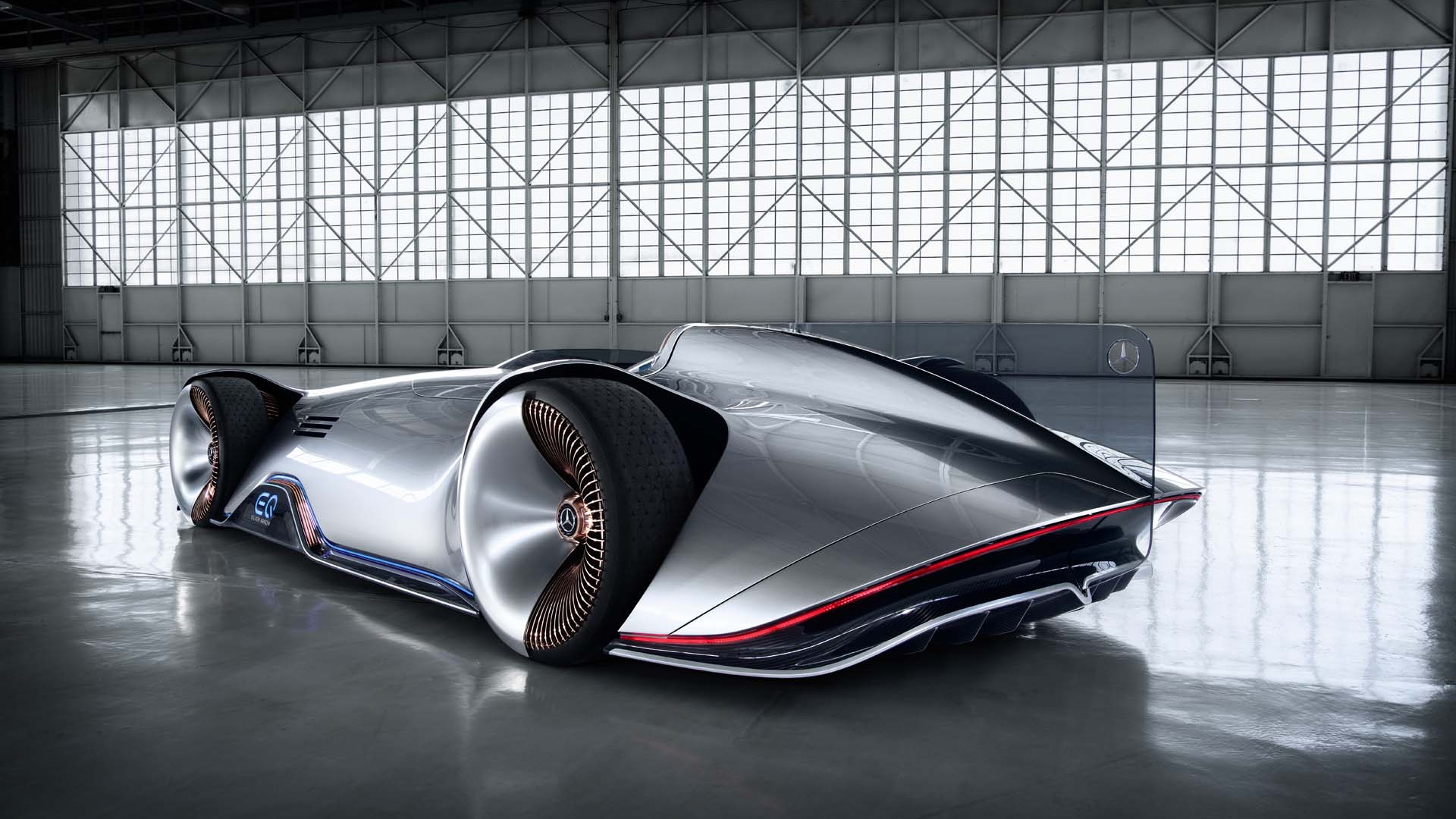 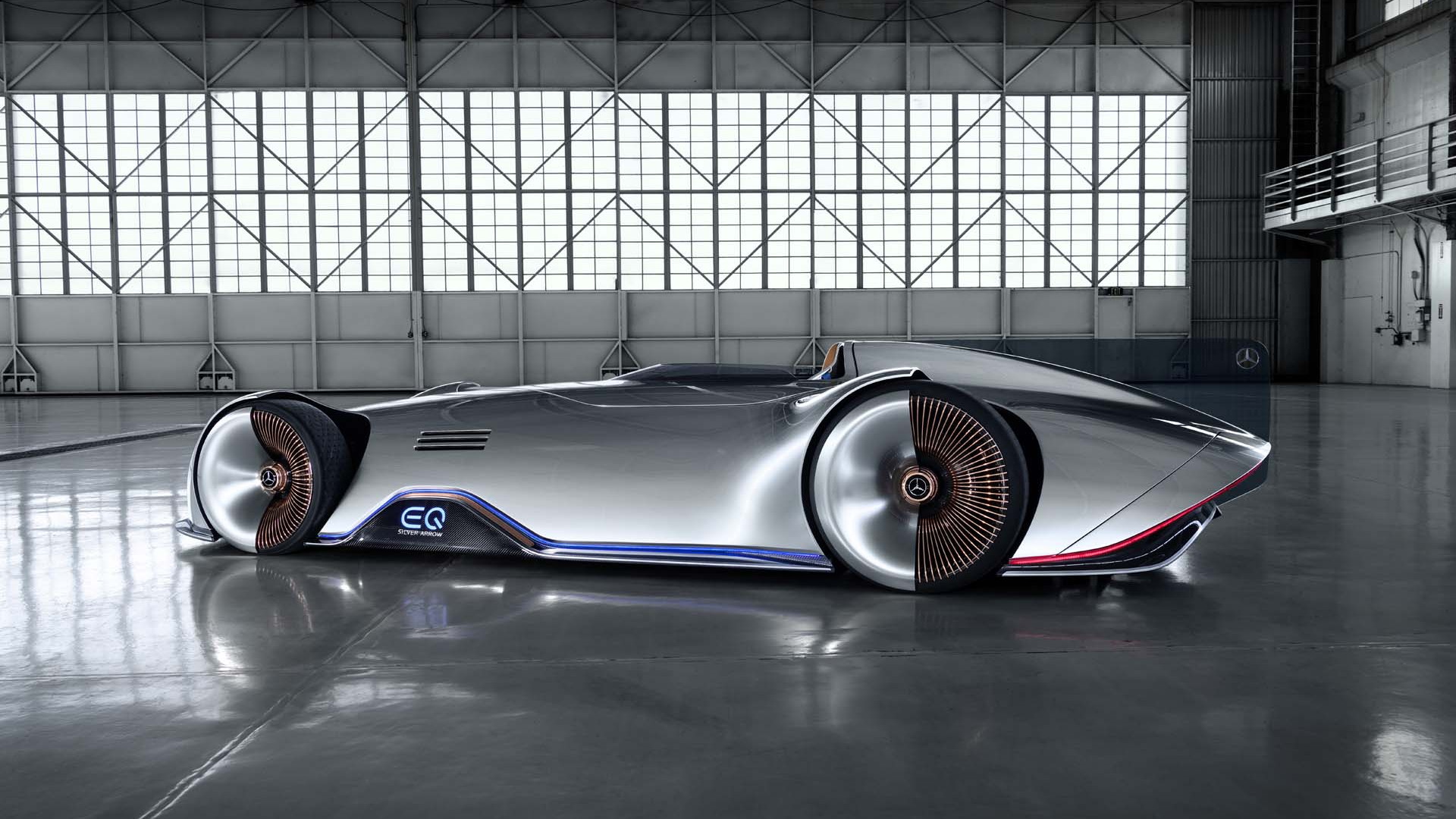 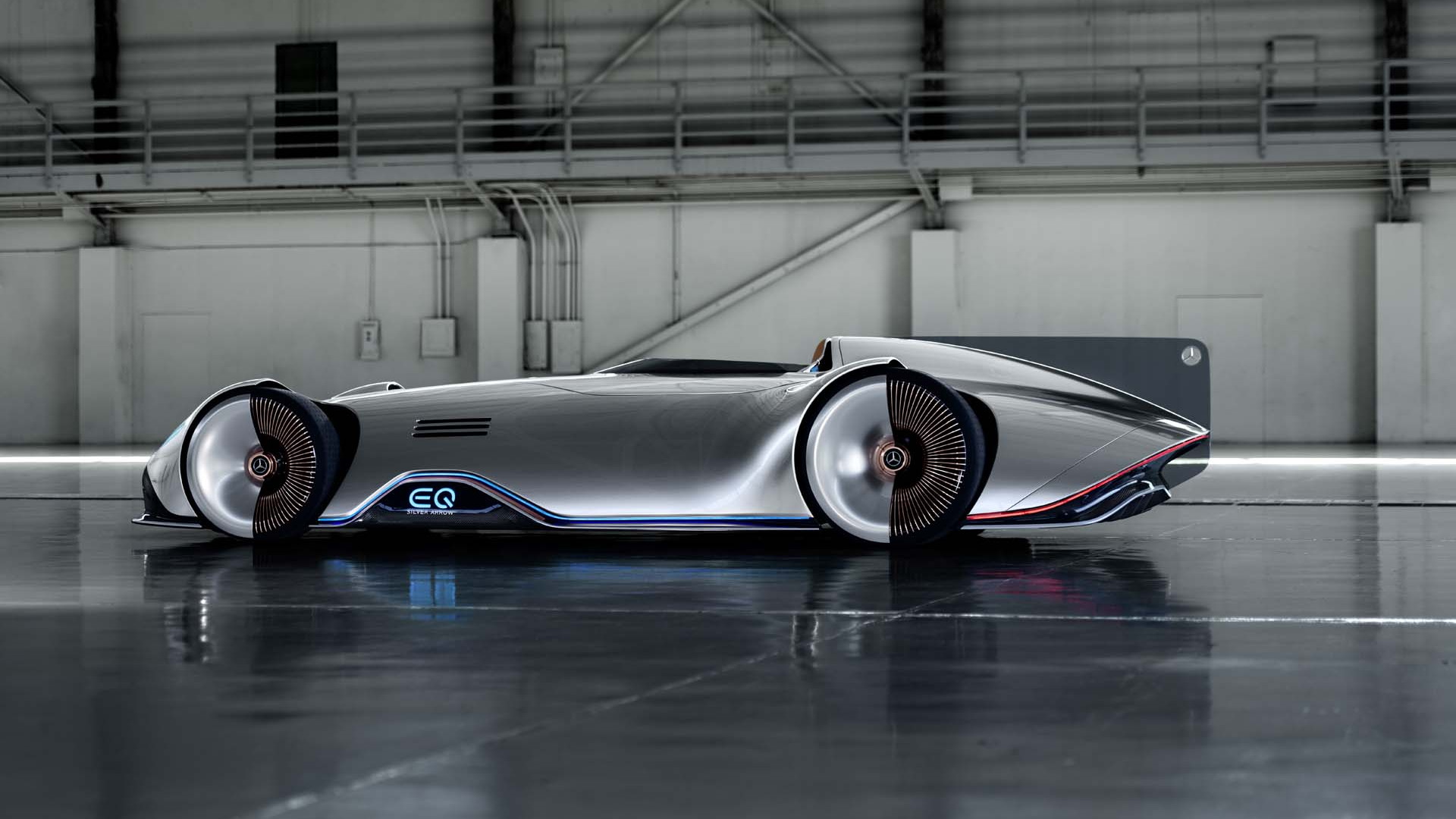 Prior to the onset of World War II, the grand prix racers of Mercedes-Benz and Auto Union (today Audi) were dominating race tracks all over Europe. The cars were referred to as the Silver Arrows, a name Mercedes-Benz still applies spiritually to its current Formula 1 cars, and one of the most famous examples was Mercedes' W125 of 1937.

On Friday, Mercedes unveiled the EQ Silver Arrow concept in Monterey, California as a homage to a particular W125, while at the same time also providing a halo for the new EQ sub-brand for electric cars. The concept with its streamlined looks specifically recalls the modified W125 Silver Arrow that 80 years ago clocked an average speed of 268.8 mph over a stretch of Autobahn. It was a record speed for a car driven on public roads, a record that stood all the way to 2017 when Koenigsegg's Agera RS hit 277.9 mph on a Nevada highway.

The EQ Silver Arrow is a single-seat speedster with looks inspired by the streamlined W125 as well as the upcoming range of EQ electric cars, the first of which is the EQC small SUV debuting in September. The concept stretches 17.4 feet in length and is powered by a purely electric powertrain rated at 738 horsepower. An 80-kilowatt-hour battery should provide more than 250 miles of range.

The body is almost entirely made from carbon fiber. Functional attachment parts are also made from carbon, like the front splitter, side skirts and rear diffuser. Another highlight is the partially free-standing multi-spoke wheels. The 168 spokes per wheel are made of lightweight aluminum and painted a rose gold color, which Mercedes says together with silver and blue is also a signature hue of the EQ brand.

The concept's interior is adorned with high-quality materials such as leather, brushed aluminum and solid walnut, while a highly-futuristic digital cockpit complete with a curved panoramic screen that projects from behind and a touchscreen integrated into the steering wheel add a touch of modernity. A touchscreen on the steering wheel can be used to alter the driving modes selector. Sound settings can also be configured here: choices include the sound of a current F1 car or an AMG V-8.

One awesome feature is the virtual race function. With the help of artificial intelligence, it is possible to engage in a virtual race against historic or present Silver Arrow racing cars. A virtual race track is superimposed onto the real roadway via the panoramic screen and the driver sees their opponent either ahead of them or behind them as a "ghost." A coach function helps one improve driving skills by giving instructions during the race.

"Over 80 years ago, the historic Silver Arrows demonstrated that Mercedes-Benz was a pioneer when it came to speed, thanks, among other things, to their streamlined shape," Mercedes design chief Gorden Wagener said in a statement. "The EQ Silver Arrow show car draws on that legacy; intended for acceleration and driving pleasure, it embodies progressive luxury and provides an insight into the future of our design.”

For more Monterey Week Coverage, head to our dedicated hub.