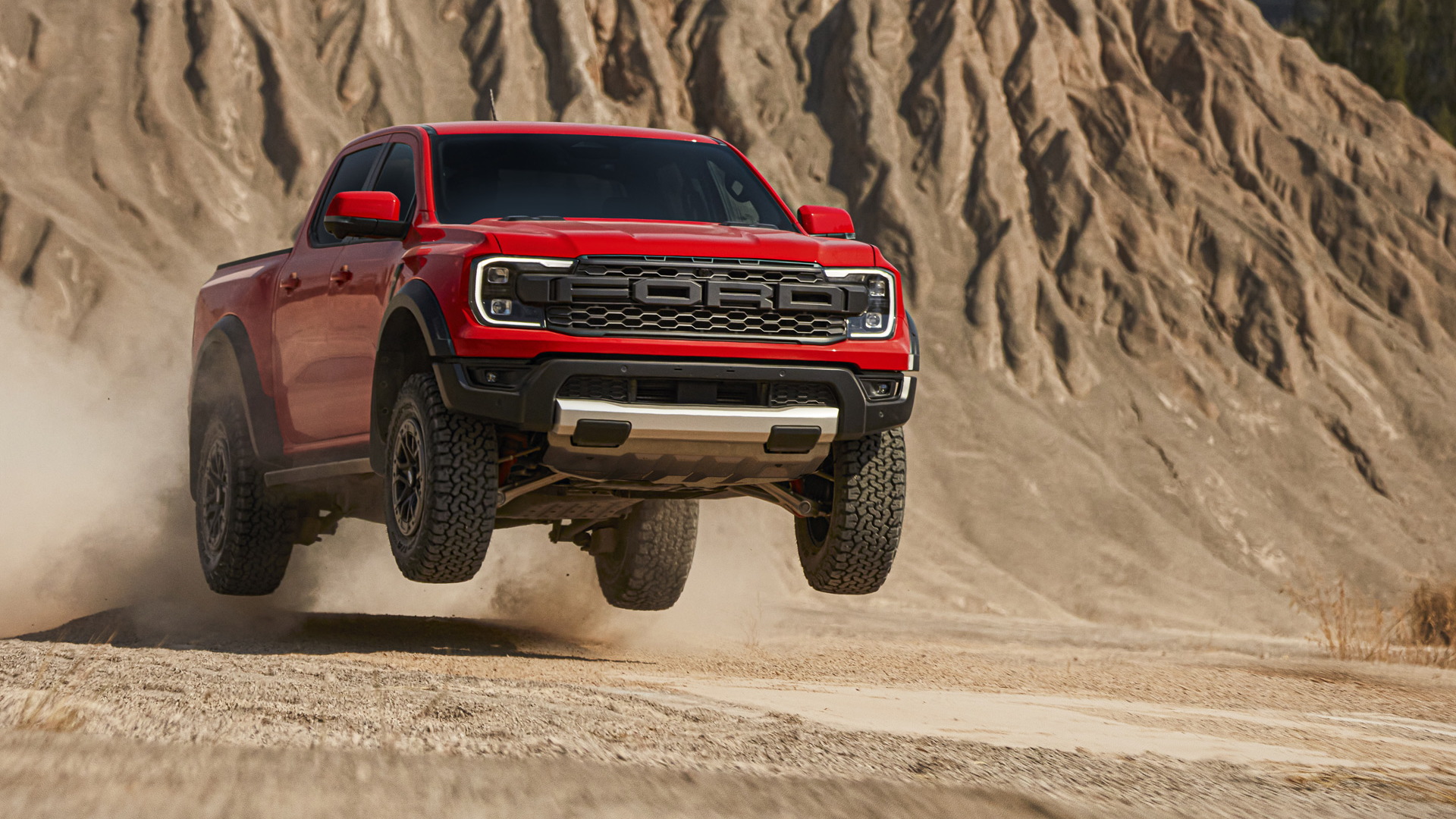 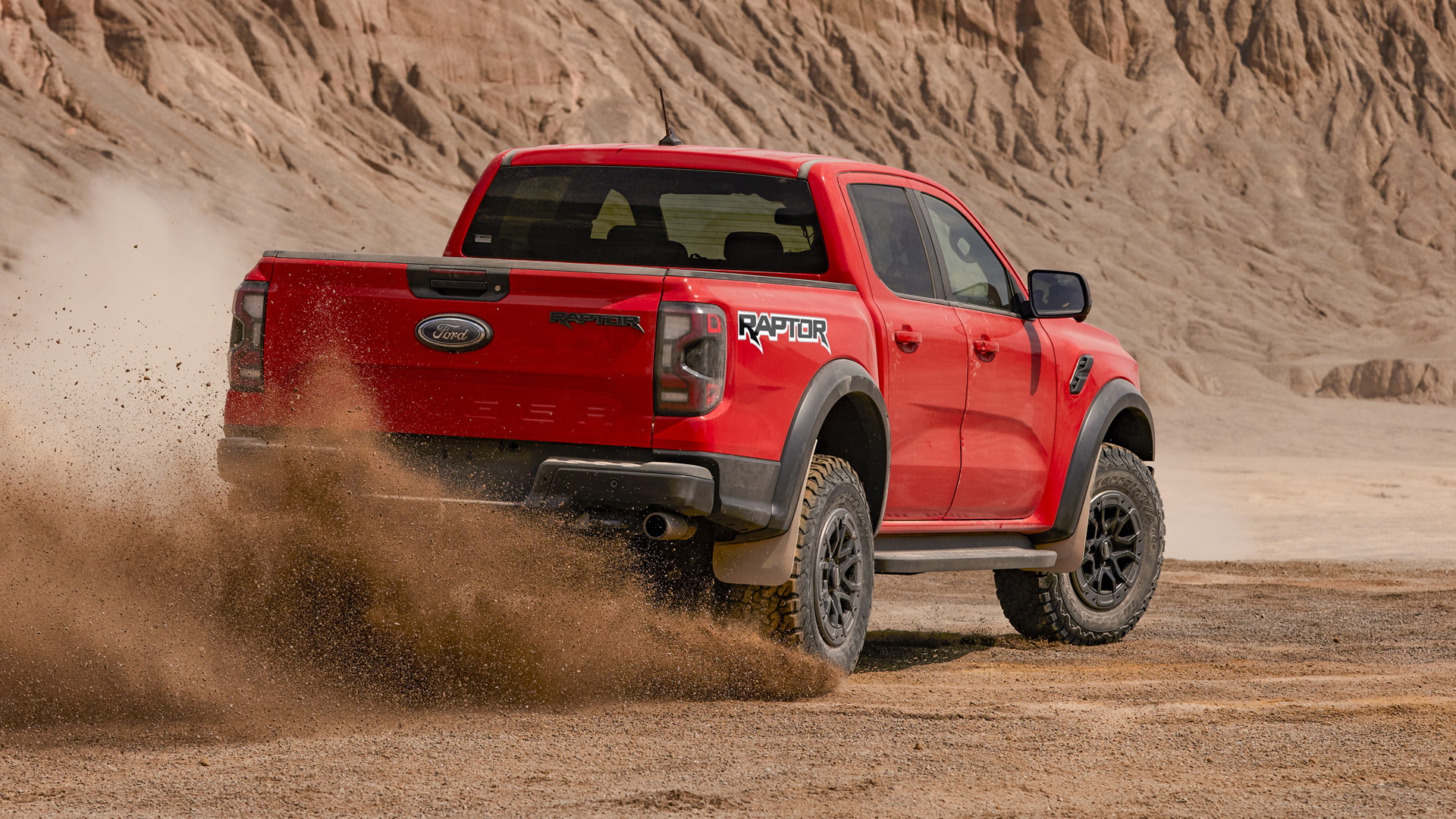 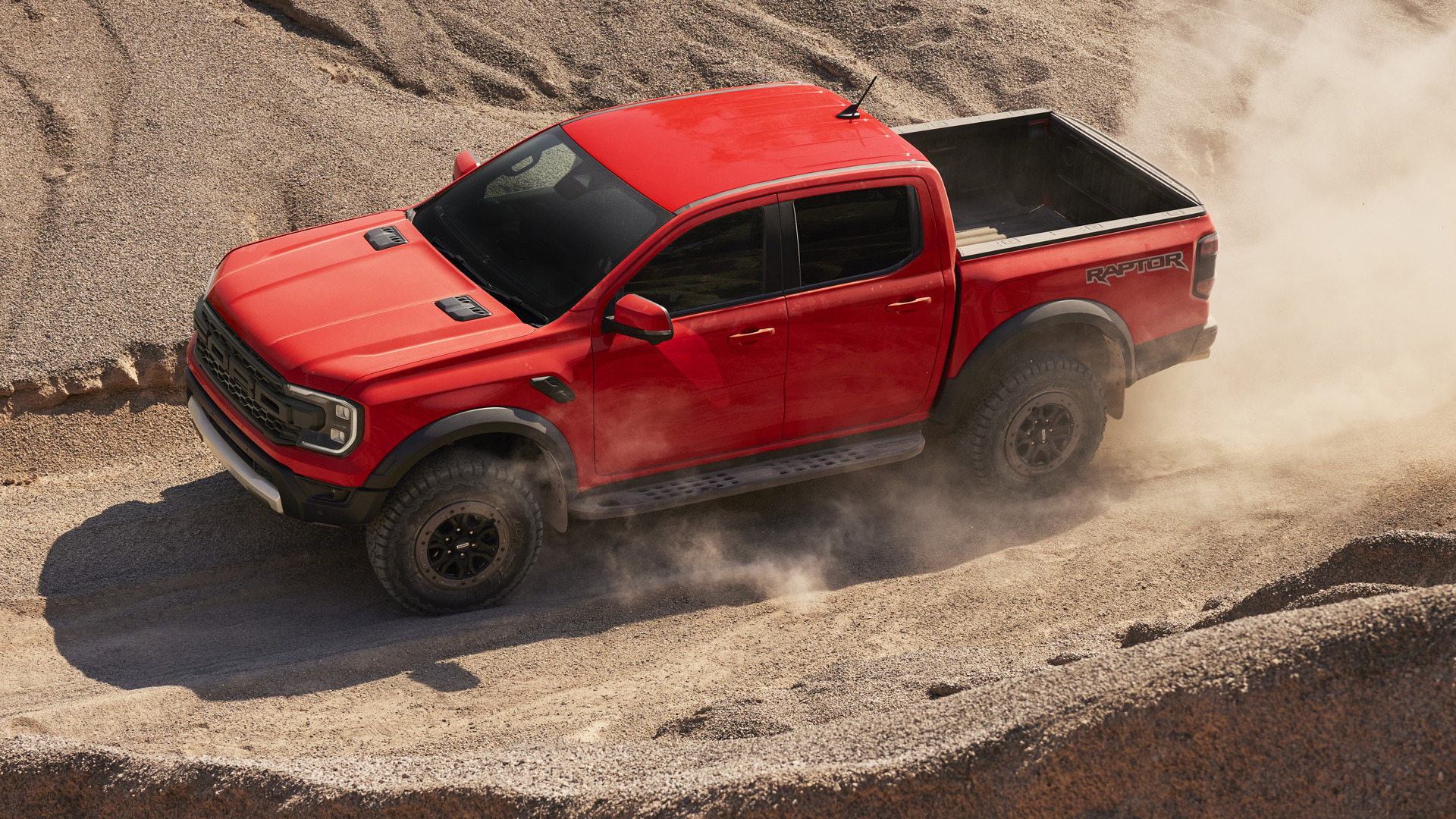 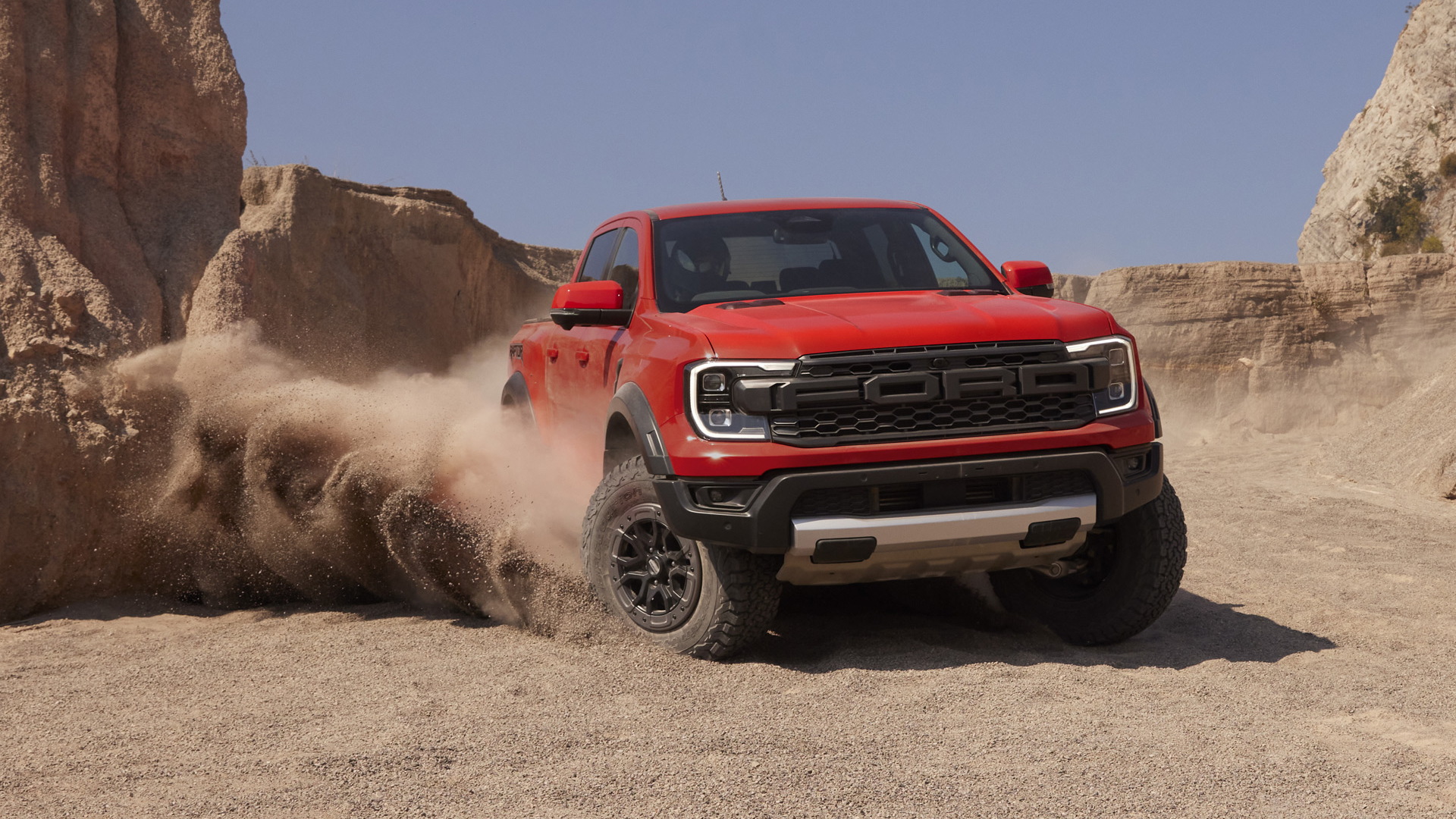 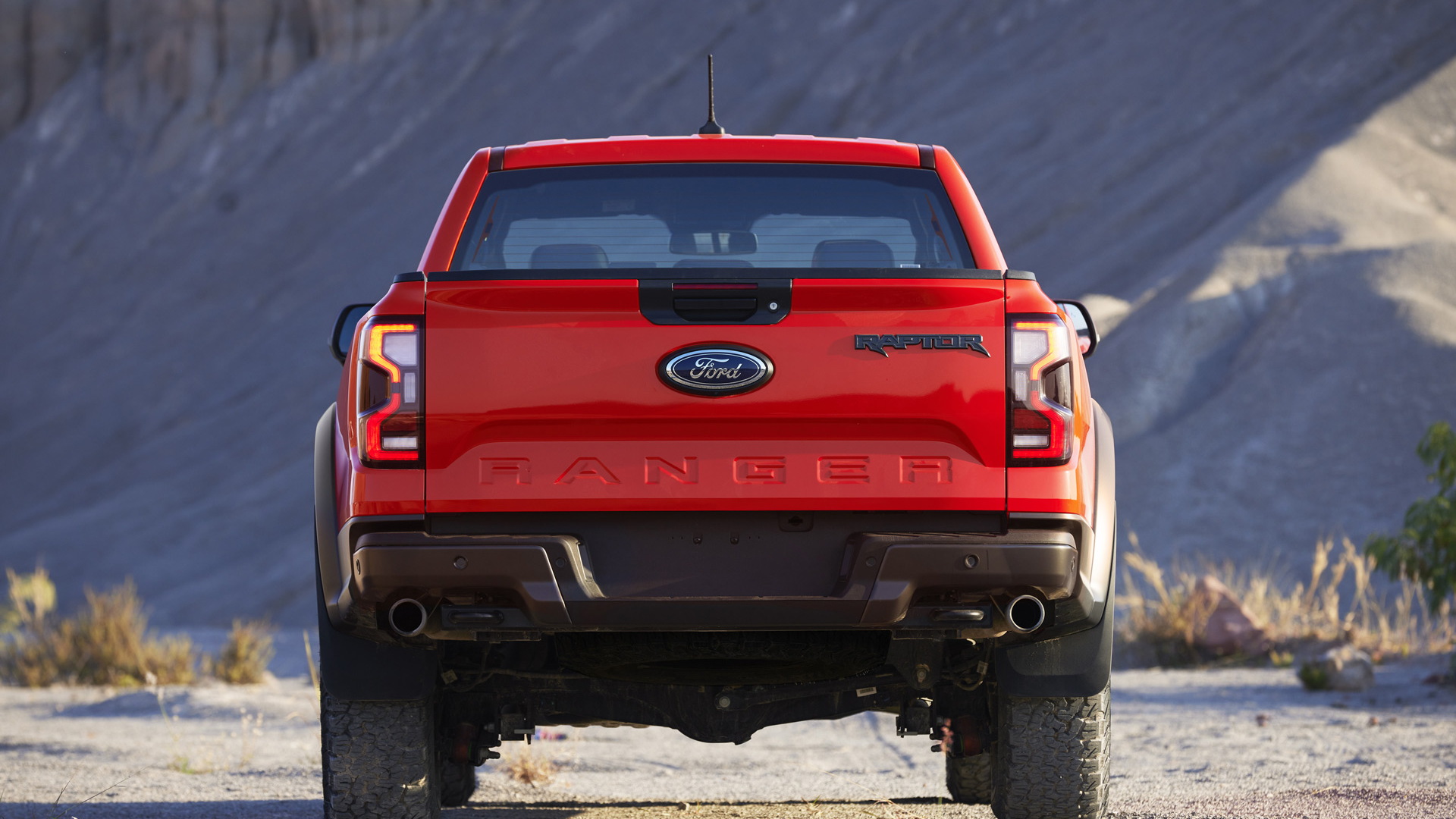 A redesigned Ford Ranger mid-size pickup truck was revealed last fall and is confirmed to start sales in the U.S. in 2023. It won't arrive on its own, though.

Ford on Tuesday revealed a high-performance Raptor variant that's also set to reach U.S. showrooms next year. That's a huge deal as the previous Ranger Raptor was never sold here, due mostly to its sole diesel powertrain, a 2.0-liter turbocharged inline-4. That engine will still be offered in the new performance pickup in some markets, but the U.S. will exclusively receive a 3.0-liter twin-turbocharged V-6, which so far has only been mentioned as coming with a 10-speed automatic.

Performance numbers will be confirmed closer to the market launch but the V-6 is targeted to deliver close to 400 hp. In some markets, it has been confirmed with 391 hp. The engine's turbochargers benefit from the same anti-lag system used in the Ford GT and Focus ST, where the turbos don't start to slow down until three seconds after the driver lifts off the throttle, helping to maintain boost pressure when the driver steps back on the loud pedal. The system is only activated with the vehicle is in Baja mode, the Ranger Raptor's most extreme drive mode.

The recently revealed Bronco Raptor, which rides on the same T6 body-on-frame platform as the Ranger Raptor, also has a 3.0-liter twin-turbo V-6 but is targeted to deliver over 400 hp. The hot Bronco is due on sale later this year as a 2022 model. And completing the Raptor trio is the original brute, the F-150 Raptor. It comes with a 3.5-liter twin-turbo V-6 good for 450 hp. However, a more powerful F-150 Raptor R packing a V-8 is due out later this year.

The powertrain is just the start of performance upgrades for the Ranger Raptor over the regular Ranger. For example, the Raptor also benefits from new mounts and reinforcements (C-pillar, load box and spare wheel) and new frame pieces (jounce bumper, shock tower and rear shock bracket) to improve chassis strength.

There's also unique suspension. It consists of aluminium upper and lower control arms, long‑travel front and rear suspension, and a revised Watt’s link rear setup all aimed at improving control when driving off-road at high speed. Of course there are also Fox dampers, in this case the popular 2.5-inch internal bypass design which provides a good balance between on-road comfort and off-road capability.

Another star of the show is a full-time four-wheel-drive system with a 2-speed transfer case and differential locks front and rear. The driver will also have at his or her disposal seven drive modes to choose from, three for on-road driving (Normal, Sport and Slippery) and four for heading off-road (Rock crawl, Sand, Mud/Ruts and Baja). Depending on the mode, various vehicle systems are adjusted including the powertrain, transmission, exhaust, throttle, steering, ABS, and traction and stability. There's also a Trail Control feature that lets the driver fix the speed below 20 mph, allowing full concentration on steering when navigating tricky passes.

The Ranger Raptor easily stands out from the rest of the Ranger pack thanks to unique styling elements, like flared wheel arches and a bold grille with an oversized “FORD” script. The wheels are a 17-inch set wrapped in off-road tires, and under the vehicle is a series of protective steel plates. Tow hooks are also found front and rear. LED lights also feature front and rear, with the headlights including a matrix LED function.

Inside, Ford has installed grippy sports seats front and rear, as well as a thick sports steering wheel and magnesium paddle shifters. A 12.4-inch digital screen is fitted as standard for the instrument cluster, while a 12-inch screen serves as the infotainment hub. A 10-speaker B&O sound system is also included. Full specifications for the U.S. will be announced closer to the next year's market launch.

The redesigned Ranger is also the basis for a redesigned Volkswagen Amarok. The new VW pickup is due for a reveal in 2022, and VW is open to the idea of a high-performance Amarok R to take on the Ranger Raptor. However, it's unlikely VW will offer any Amarok variant in the U.S.