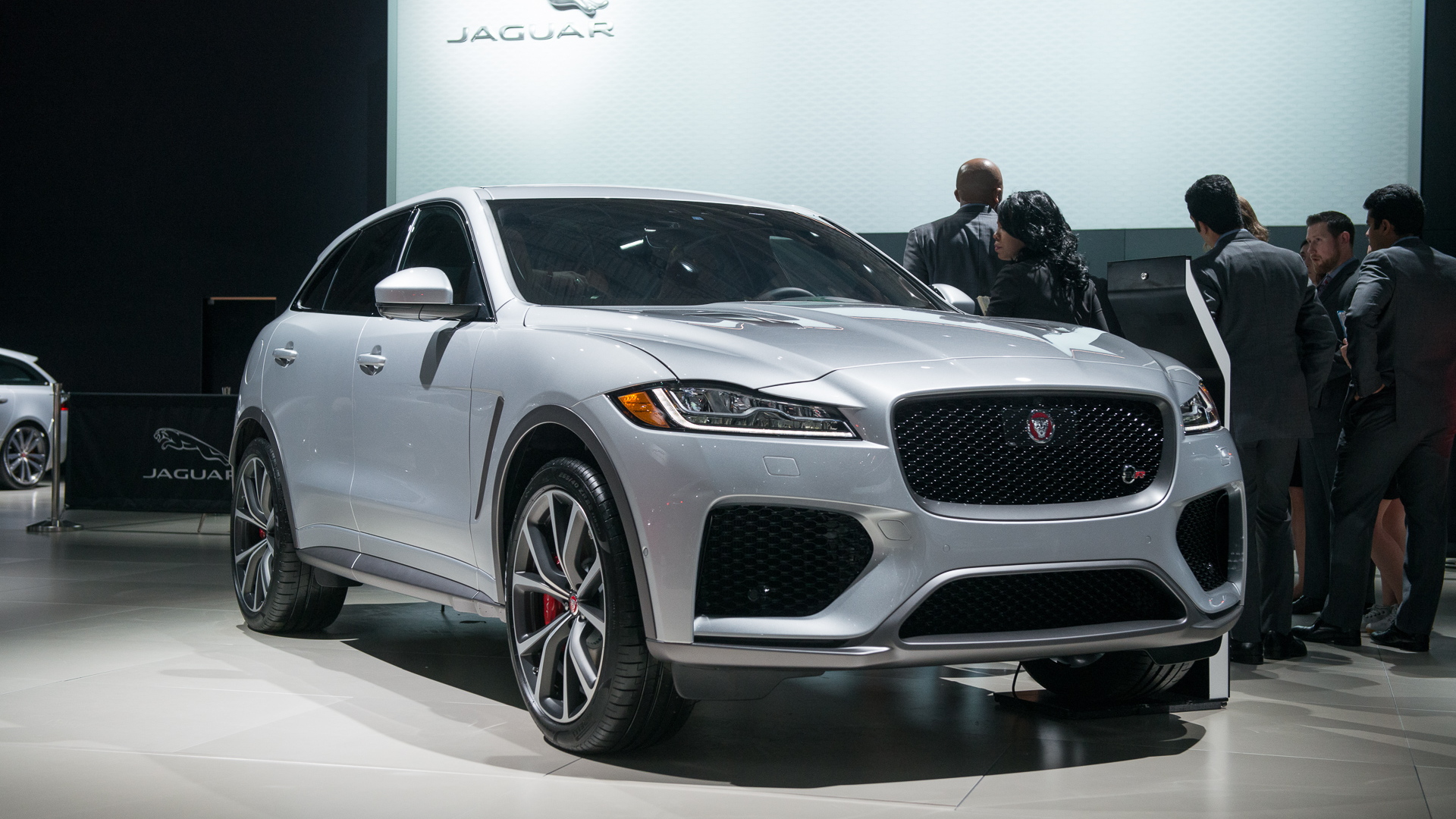 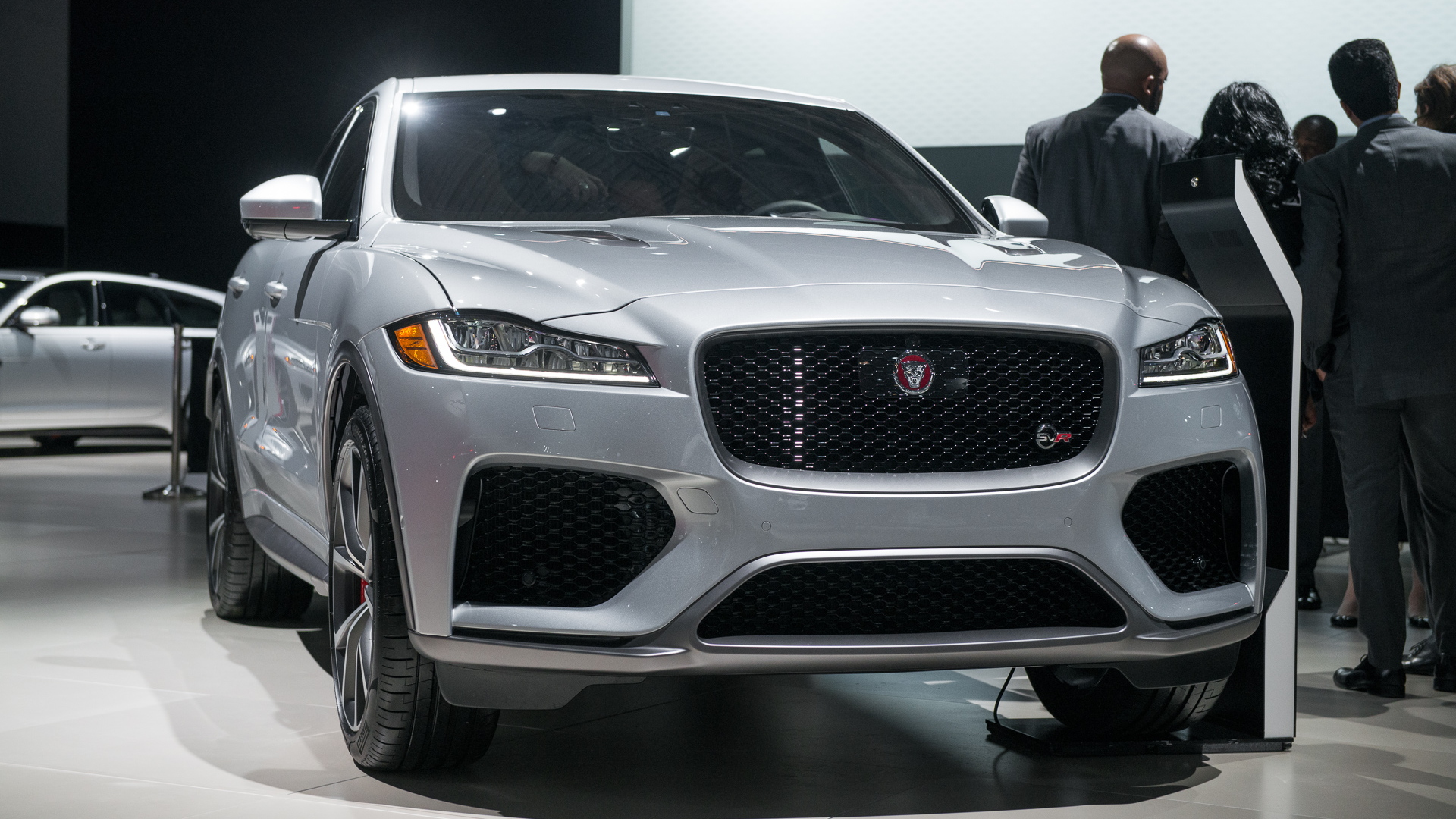 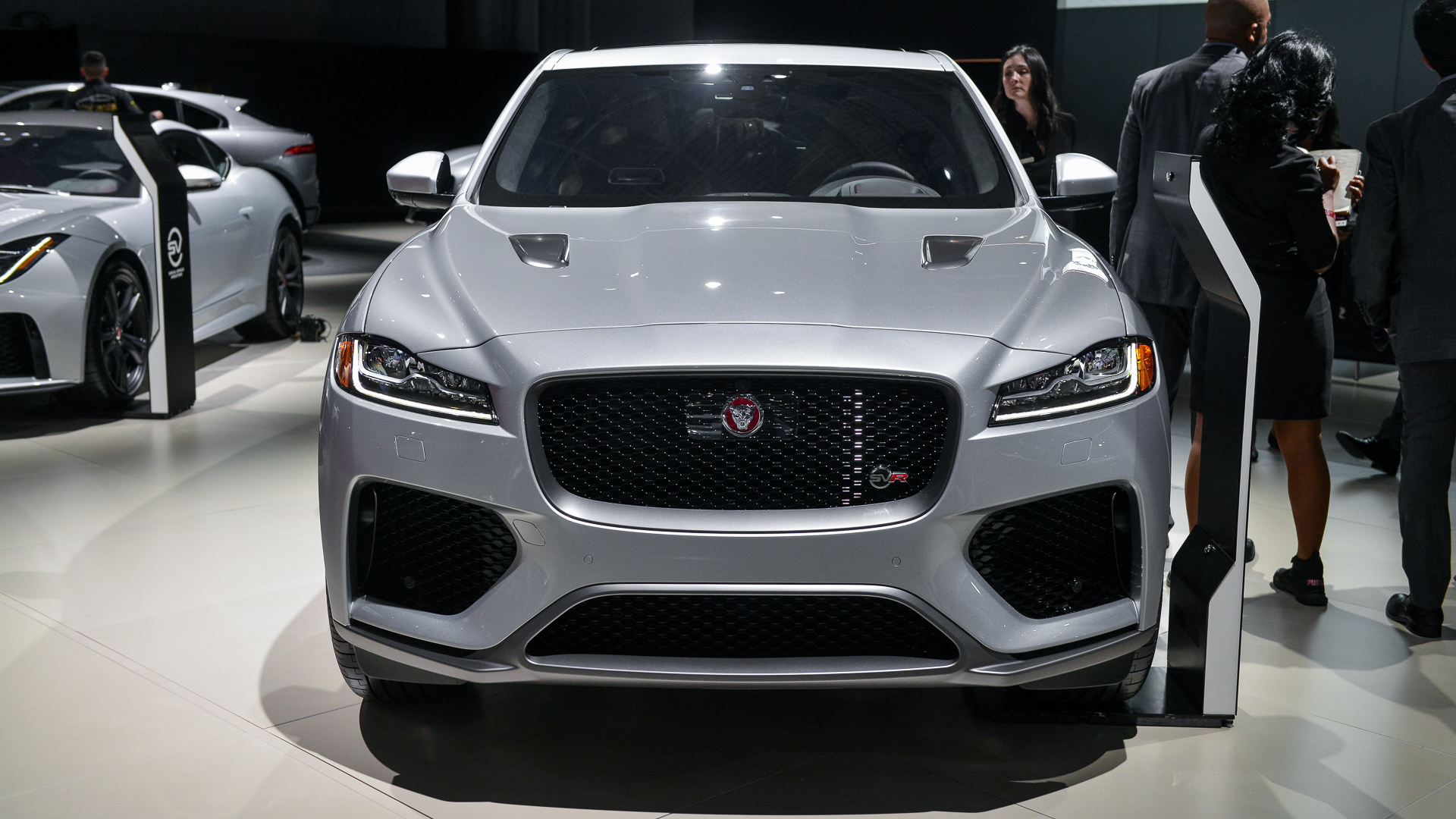 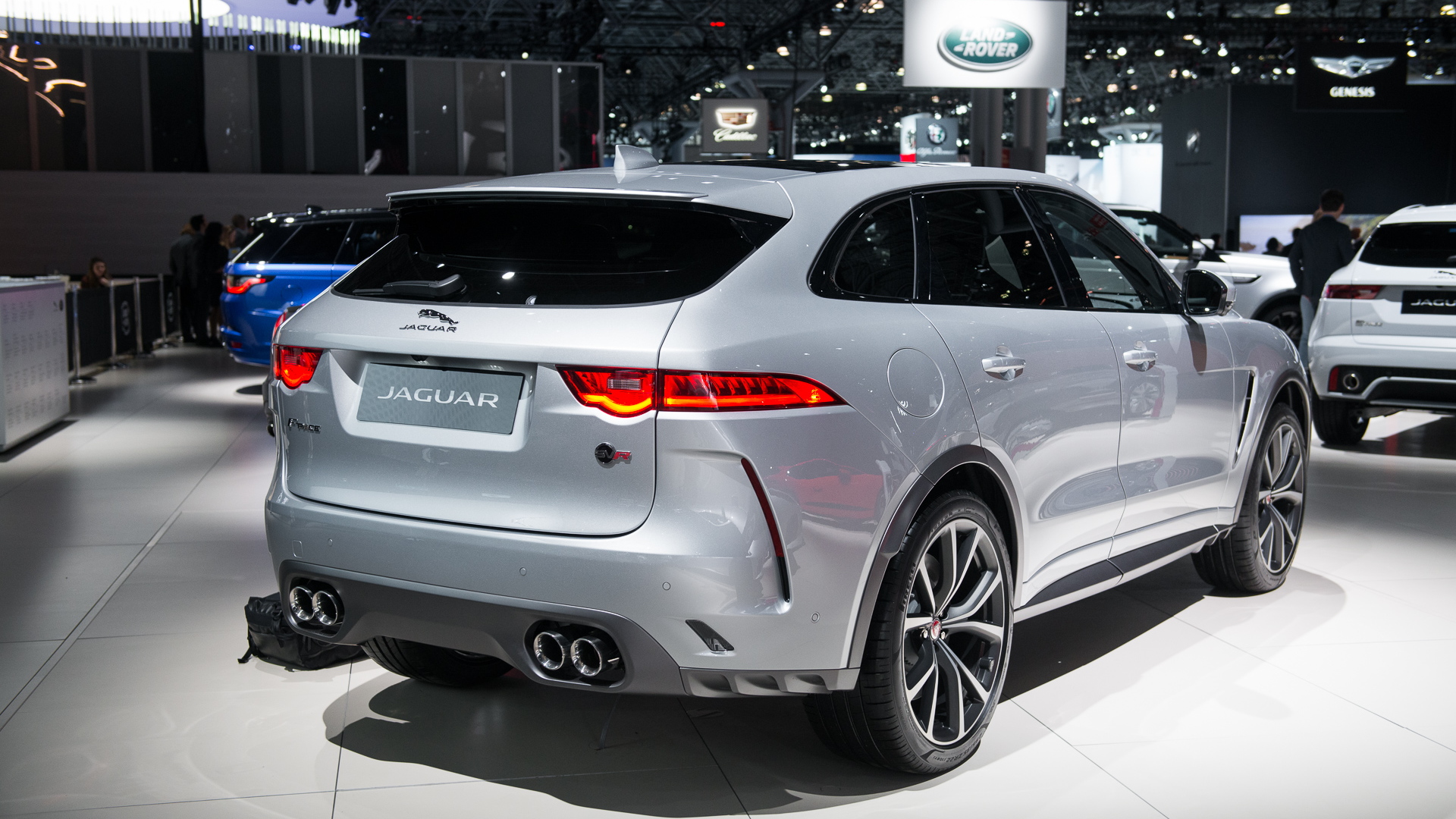 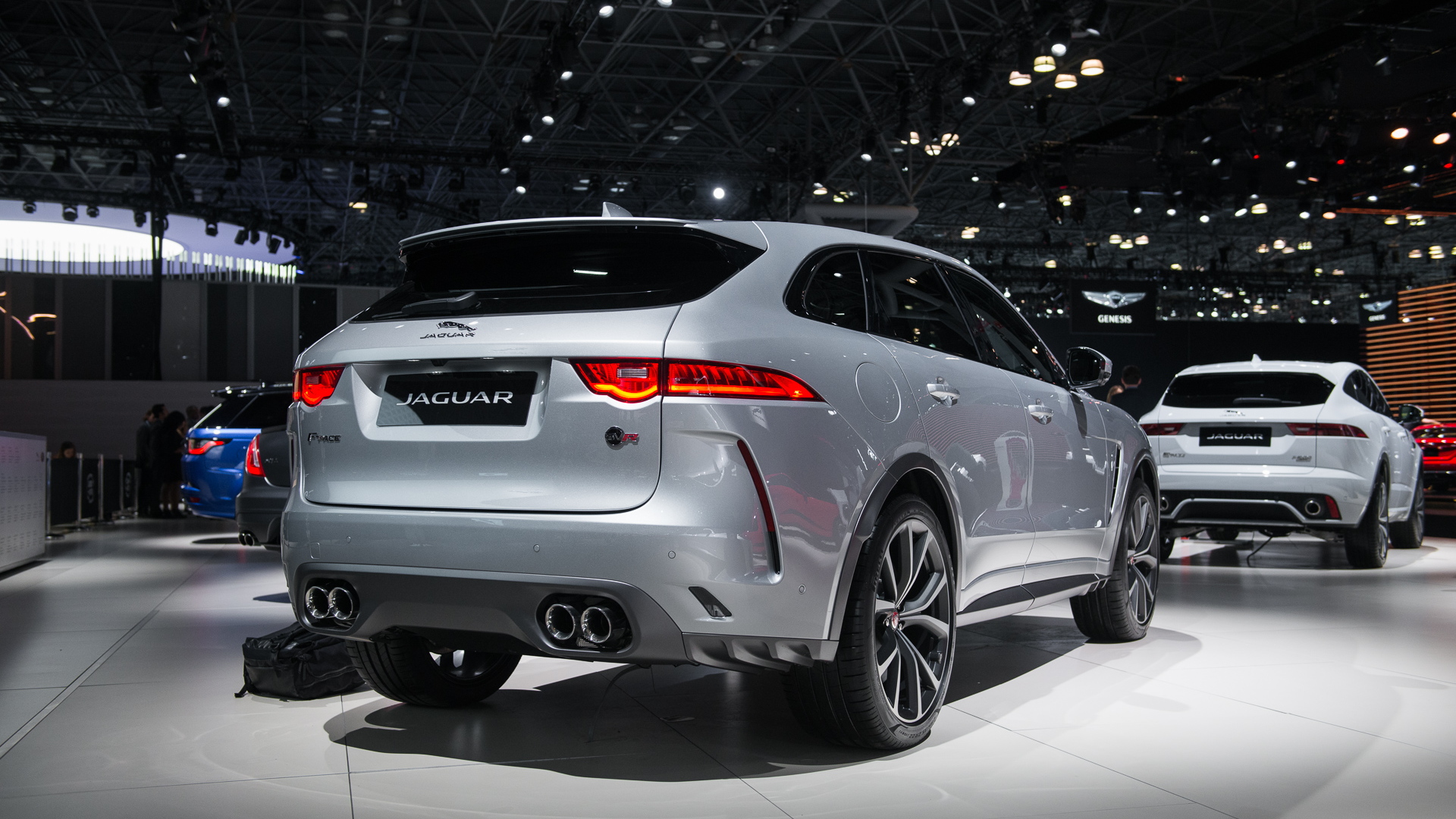 Powering all four wheels, the F-Pace SVR sprints up to 60 mph in 4.1 seconds, en route to a 176-mph top speed. The SVR is Jaguar’s first performance SUV and elbows-in to an elite set already crowded with the Mercedes-AMG GLC63, Alfa Romeo Stelvio Quadrifoglio and Porsche Macan Turbo, plus the soon-to-be-arriving BMW X3 M and Audi RS Q5 models.

A Land Rover Range Rover Velar SVR is likely to join the crowd soon too.

At a fast pace

The F-Pace SVR gets a bigger snout than the rest of the F-Pace lineup that helps the SVR’s V-8 inhale. Bigger tailpipes and a louder, lighter exhaust help the F-Pace exhale too, shotgunning the SVR’s soundtrack into its wake.

Hood vents help the SVR move more hot air from under the hood, and revised fender vents help cool and reduce lift at the front wheels.

At the rear wheels, Jaguar added an electronic rear differential that shifts torque to the outside wheels for better cornering and help the F-Pace SVR stand harder on its rear-wheel bias—the first high-power SUV with a “drift mode”? Jaguar says its Dynamic mode clicks through gears faster, stiffens the steering, and sharpens the throttle to extract as much performance from a 2-ton SUV as possible.

The SVR wears bigger 21- or 22-inch wheels up to that are 1 inch wider with stickier tires than the F-Pace.

The little things add up: Jaguar says the wheels cut up to 17 pounds from the overall weight,  and the exhaust is 14.5 pounds lighter than the standard system. Dozens of pounds from thousands of overall weight may not dramatically alter the performance, but the big V-8 vaults the F-Pace SVR into extra-legal speeds anyhow. Uprated, 15.5-inch front and 15.6-inch rear brakes arrest all the fun back into legal limits.

Jag stiffened the F-Pace SVR to handle the power and provide better grip through firmer front and rear springs, 30 and 10 percent respectively, and stronger anti-roll bars help it stay flat.

The “SVR” badge is tops in the Jaguar den, and the pinnacle of output from the Special Vehicle Operations division. The Jaguar F-Type wears an SVR badge in its halo edition too.

Inside, the SVR has deeper front and rear seats, and Jaguar’s latest infotainment system that stacks two 10-inch screens atop each other for infotainment and vehicle control systems.

Like the F-Type SVR, the 2019 F-Pace SVR doesn’t come cheaply. When it goes on sale later this year, the Jag’s hot crossover will start at $80,985, including destination.

For more New York coverage, head to our dedicated hub.