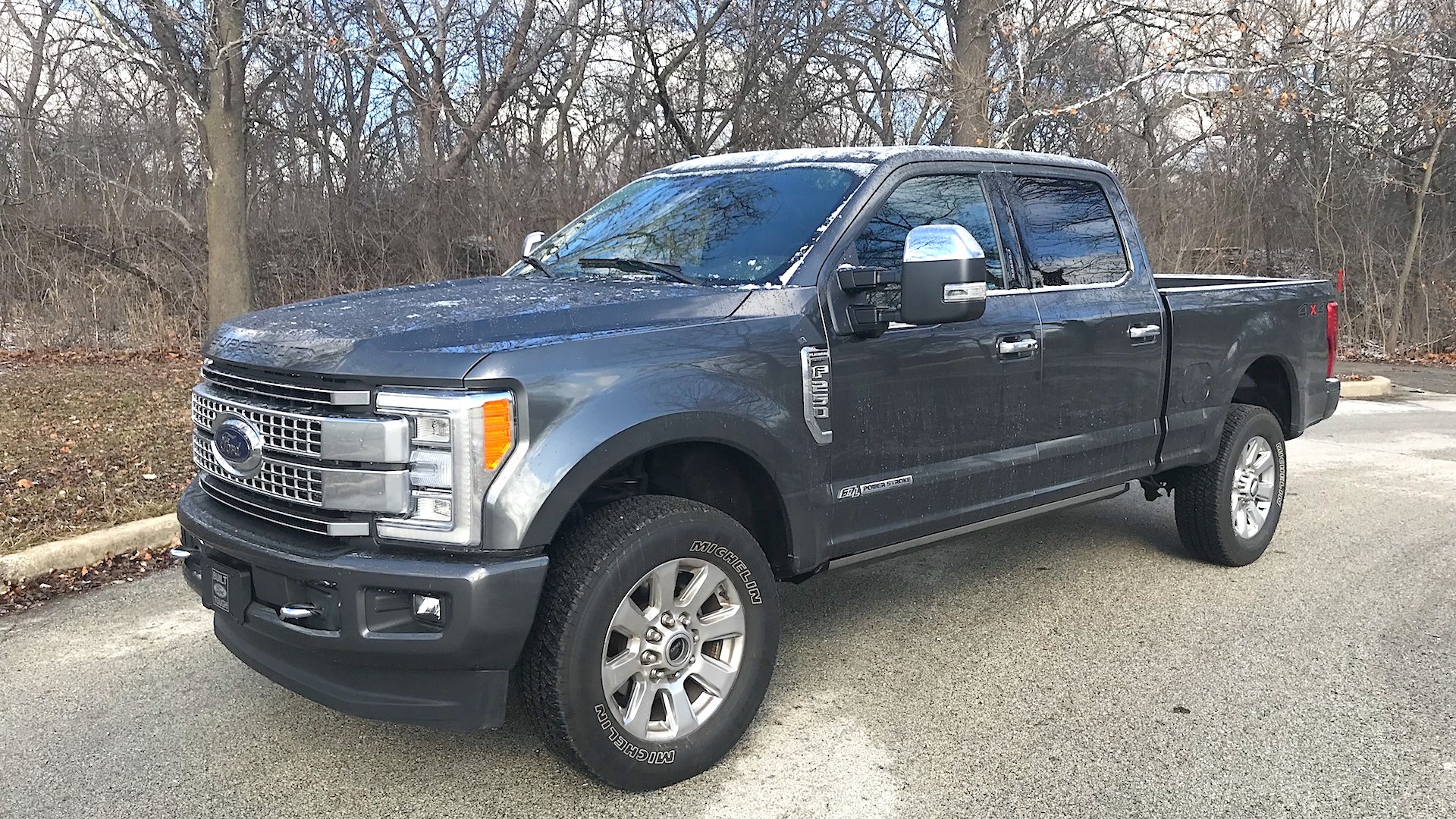 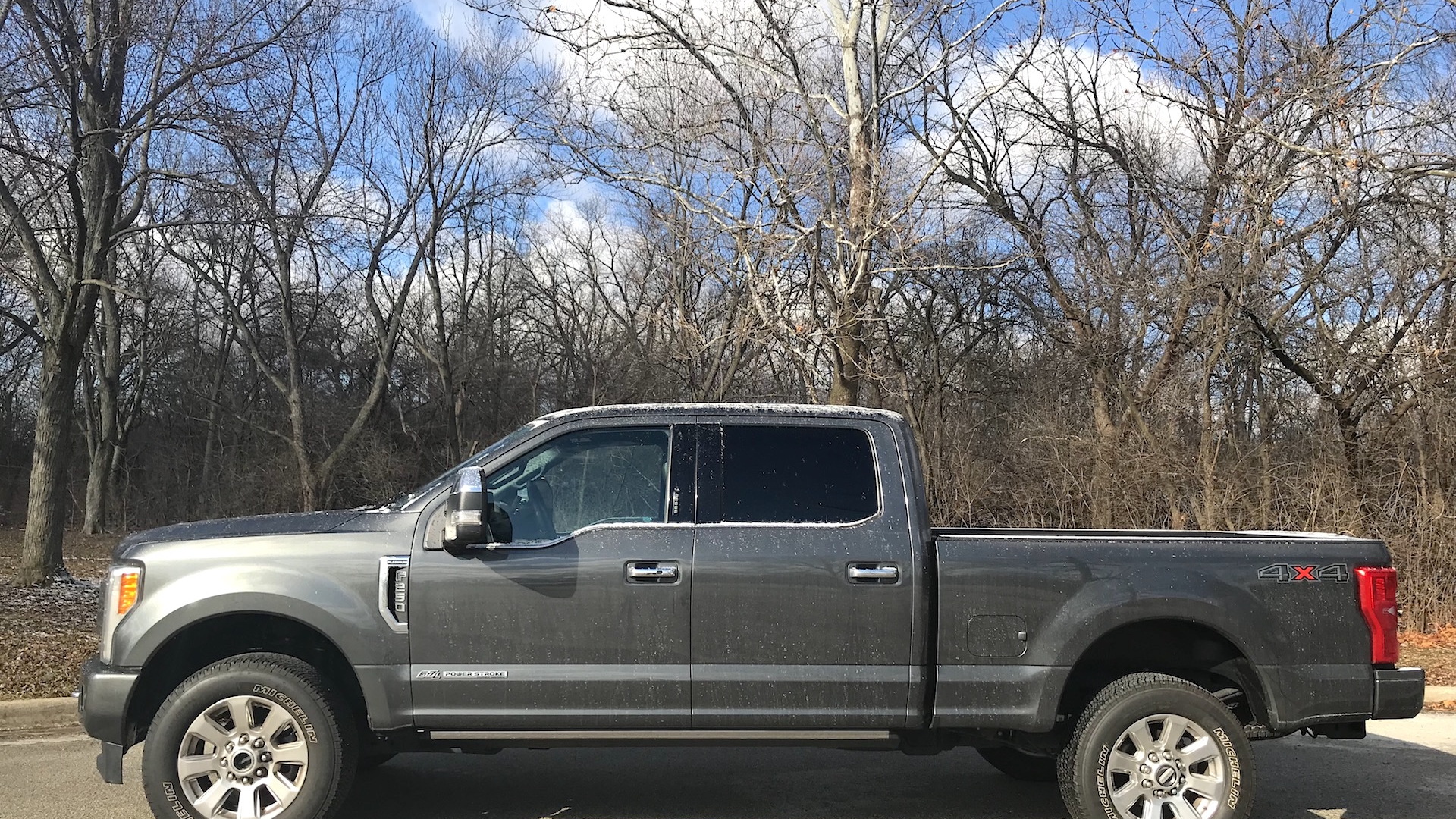 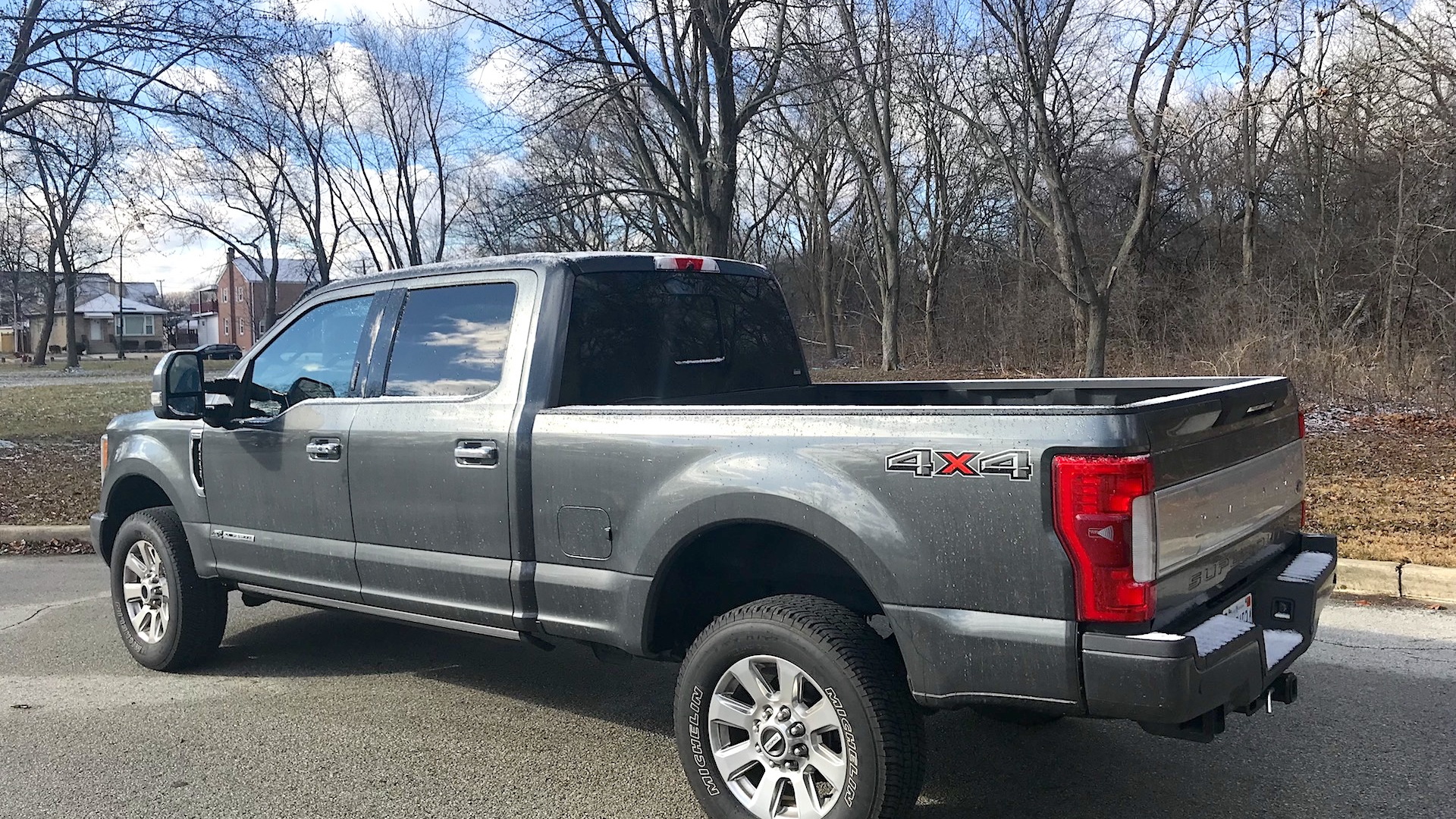 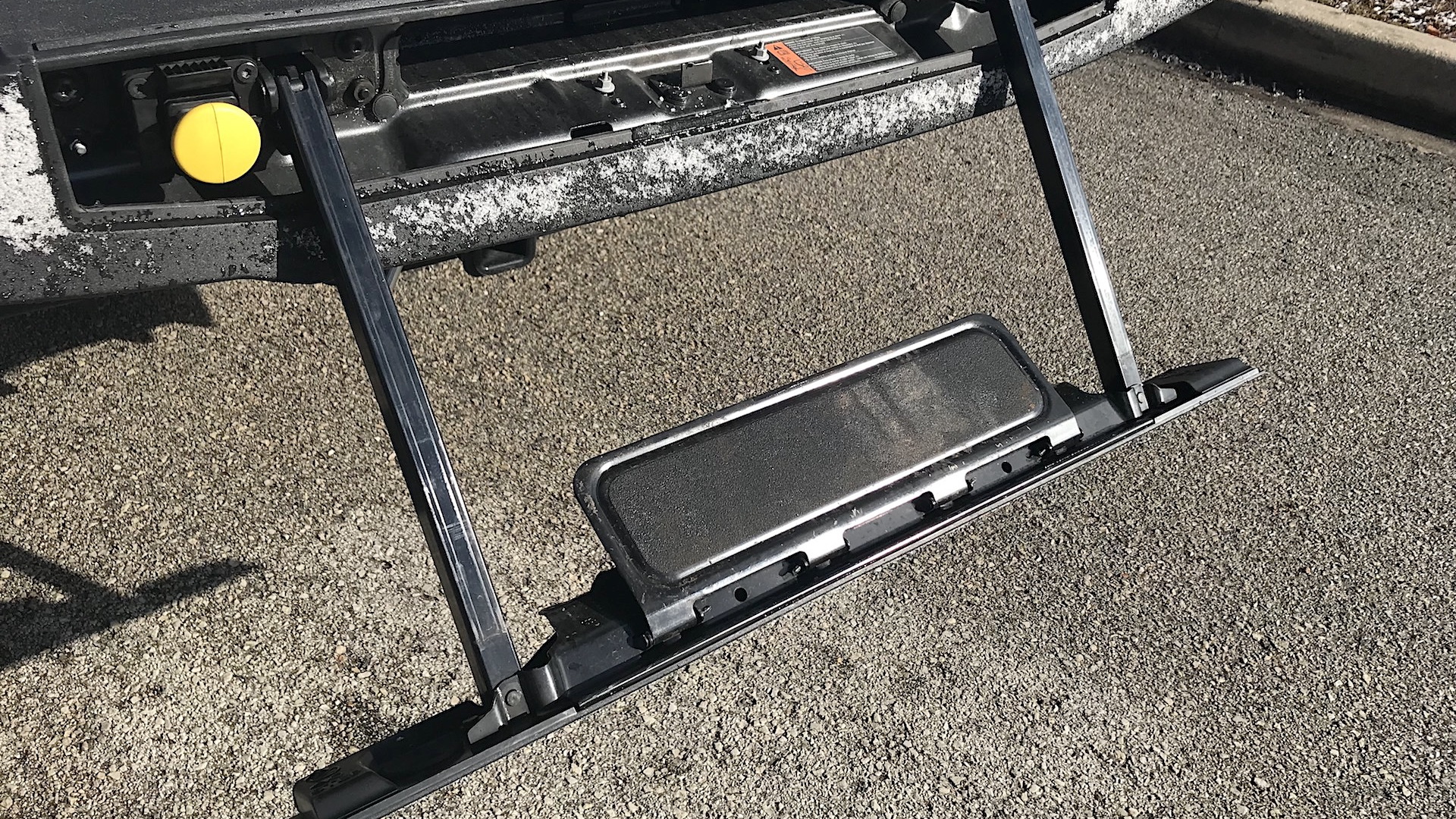 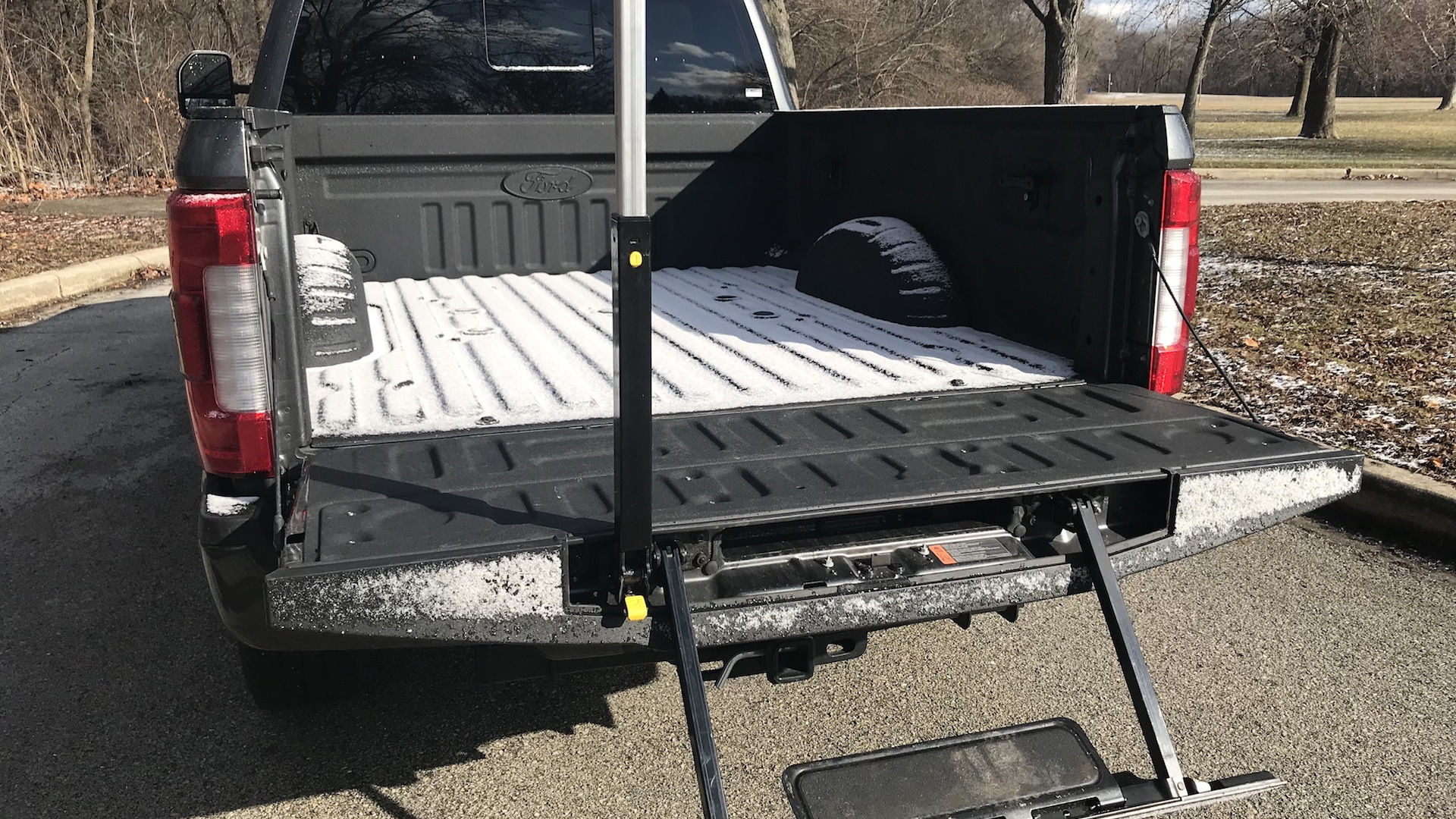 Enough already! Your trucks are big. I get it. Can we stop with the bigger is better mentality?

I spent last week with a 2017 Ford F-250, a mega truck not exactly suited to the urban confines I call home. Ford updated its Heavy Duty pickups for the 2017 model year, increasing the power output, stiffening the frame, improving the ride, and making these behemoths even bigger and more capable. But no smaller, that's for sure.

The timing of my pickup loan was fortuitous, as my mom needed some stuff moved. I know, right? As soon as you get a truck you have to help people move.

The following are some thoughts on living and working with Ford’s new Heavy Duty pickup.

For a guy who lives in Chicago and has to deal with alleys, street parking, and tight one-way streets with cars lined up on both sides, this thing is just too darn big. If I had a sprawling ranch in West Texas, it would be fine, but do today’s trucks need to be too big to fit in most garages?

I used to think that retractable running boards were a ridiculous luxury. Not any more. If this monster didn’t have running boards, I’d have to set up base camp half way up the climb so I could acclimate to the change in atmospheric pressure and oxygen levels. Retractable running boards are still not entirely necessary, but there are times when fixed steps become a problem, like when off-roading, so retracting them up into the underbelly of the truck is useful.

The bed step is a godsend.

I moved several boxes for my mom and that meant getting into and out of the bed. Without the bed step built into the tailgate, I would have had to learn the Fosbury Flop. I was an idiot, though, and didn’t realize that the handle was part of the mechanism, too, so I had to rely on balance to get up and down instead of steadying myself with the handle.  Now I know, and I'm slightly less of an idiot.

The diesel is a stroke of genius.

Ford’s Powerstroke 6.7-liter V-8 turbodiesel churns out 440 horsepower and an earth-moving 925 pound-feet of torque. Here, it is paired with a 6-speed automatic transmission that's larger than most apartments in Chicago.

This duo does a great job of getting the F-250 moving from a stop, and if you floor it from a light, 60 mph will arrive in about 7.0 seconds. Highway passing is also a breeze, making this monster, which weighs somewhere in the neighborhood of 6,500 pounds, scoot like a much smaller car.

Over 459 miles of driving, mostly on the highway where I was pushing a big brick through the air at 75 mph, the F-250 returned 15.1 mpg. While that doesn’t sound spectacular, I think it’s pretty good for such a heavy, lumbering beast. Had I heeded the posted speed limit, I'm sure I could have upped that by 1-2 mpg.

The ride is unpleasant.

The F-250 Limited may look like a Cowboy Cadillac, but it doesn’t ride like one. This thing is purpose-built to do work. That means the frame, which is 24 times stronger than the one before it and features 95 percent high-strength steel and two additional crossmembers for a total of 10, is heavy. The suspension is also heavy, and so are the brakes, and the wheels and tires. It's meant to carry a big load in the bed while hauling a trailer full of more stuff.

The problem with unsprung weight is that it creates a harsh ride. The tall sidewalls and high ride height keep the F-250 from crashing over bumps, but that ride height also amplifies road imperfections by the time they reach the passengers, turning potholes and speed bumps into higher frequency events that create a bouncy, busy ride. Try to drink a coffee on a pockmarked Chicago street in the F-250 and you’ll have a burned lap and a load of laundry to do.

On the freeway, however, it's smooth sailing. The stiffer frame prevents the typical jiggle you get with a weaker truck, and Ford has borrowed adaptive, electric-assist steering from the Edge that slows down the ratio at highway speeds by up to 30 percent to help the truck track nice and straight. Pleasant highway cruiser, bouncy bad road ride.

My tester was a F-250 SuperCrew Limited. The $62,110 base price was enough to make me do a double take. Then I saw the $77,015 as-tested price thanks to the $8,595 6.7-liter Powerstroke diesel V-8, the $2,795 Platinum Ultimate package (twin-panel sunroof, adaptive cruise control, lane-departure warning, and trailer tow camera), a $495 spray-in bedliner, a $390 3.55 electronic locking rear axle, $370 for a fifth-wheel hitch prep package, $185 rear inflatable seat belts, and $725 for an individual trailer tire-pressure monitoring system/trailer camera prep kit. Wow! We’re approaching $80,000 for a pickup, and this one is a model year old!

This is the truck for a well-to-do contractor who wants to entertain clients and still get work done. The interior has all the amenities and is nicely finished, but this beast can still tow 15,000 pounds, haul 1,836 pounds in the bed, and drive through just about anything with its four-wheel-drive system.

For the life of me, though, I can’t fathom why anyone would buy it as everyday transportation due to the high price and the aforementioned ride issues.

Maybe that’s just the city boy in me talking.