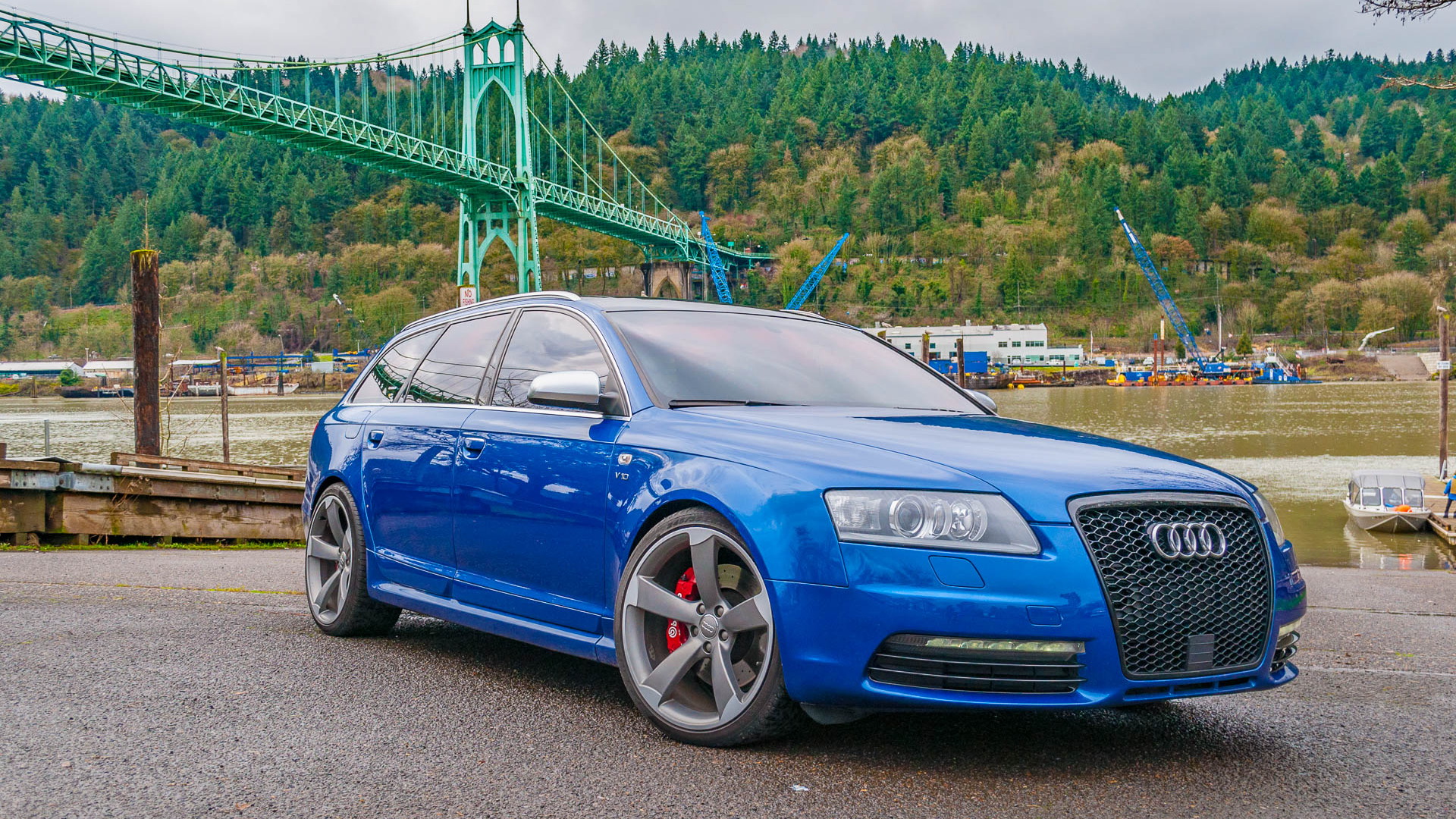 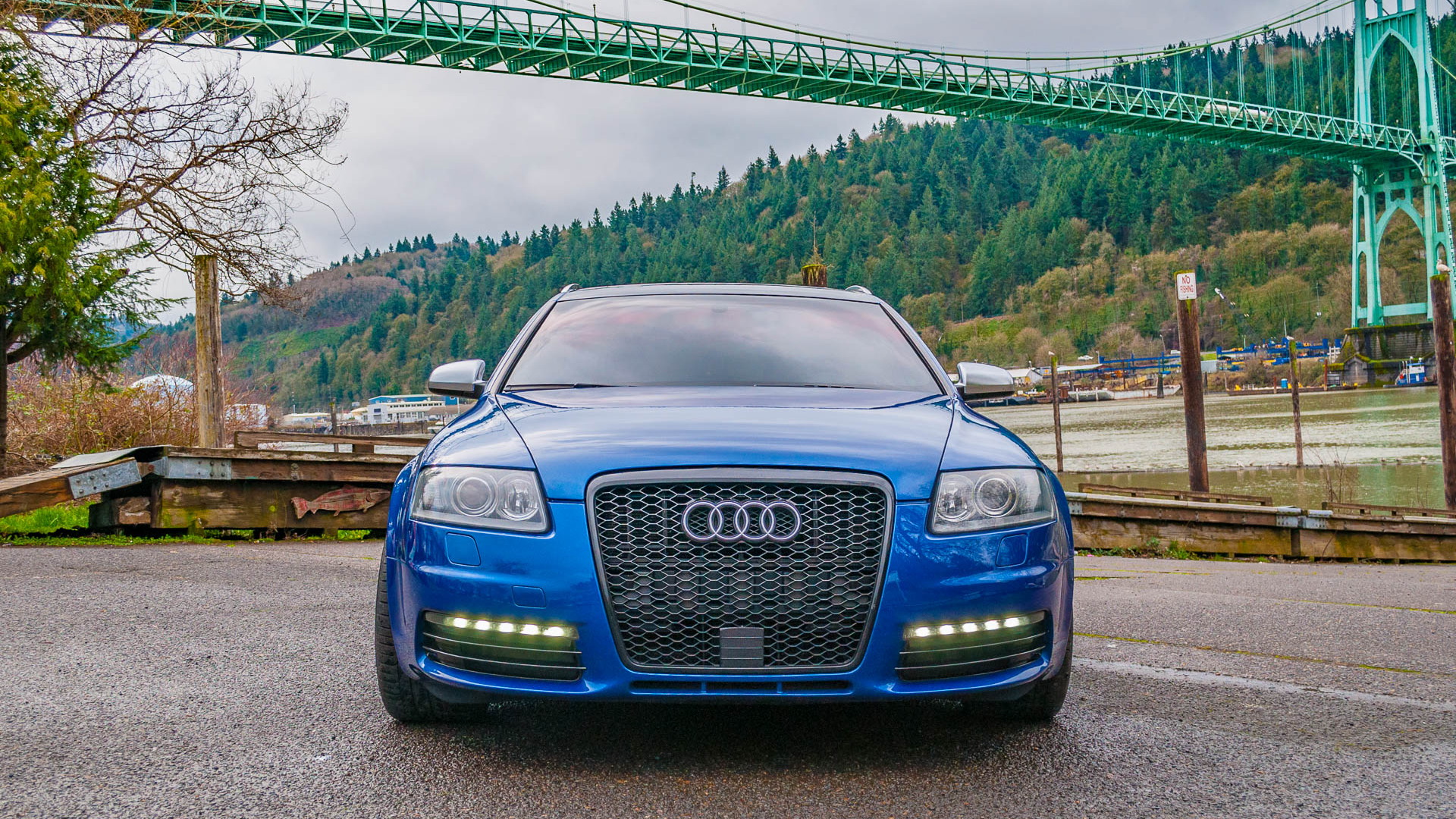 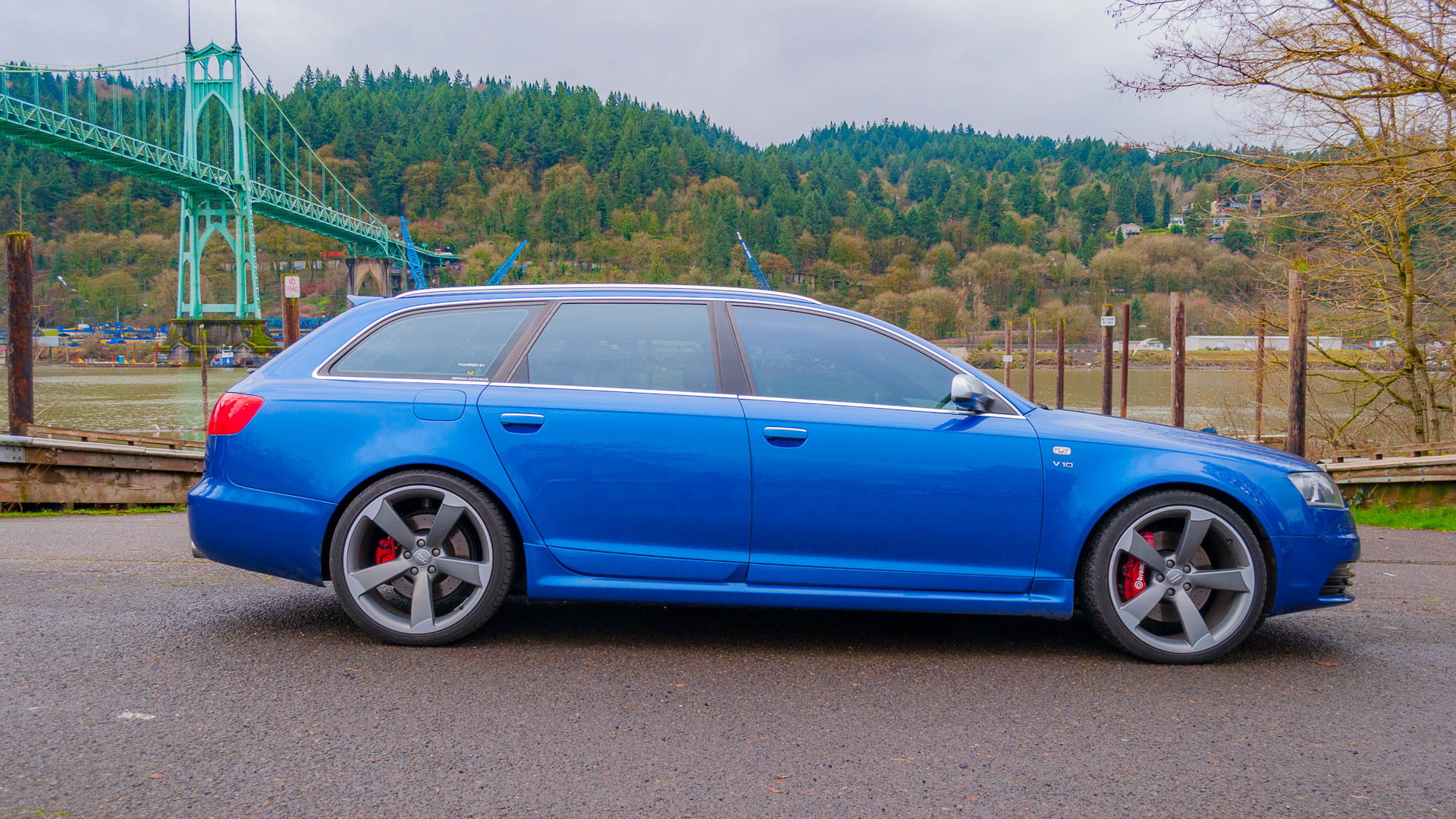 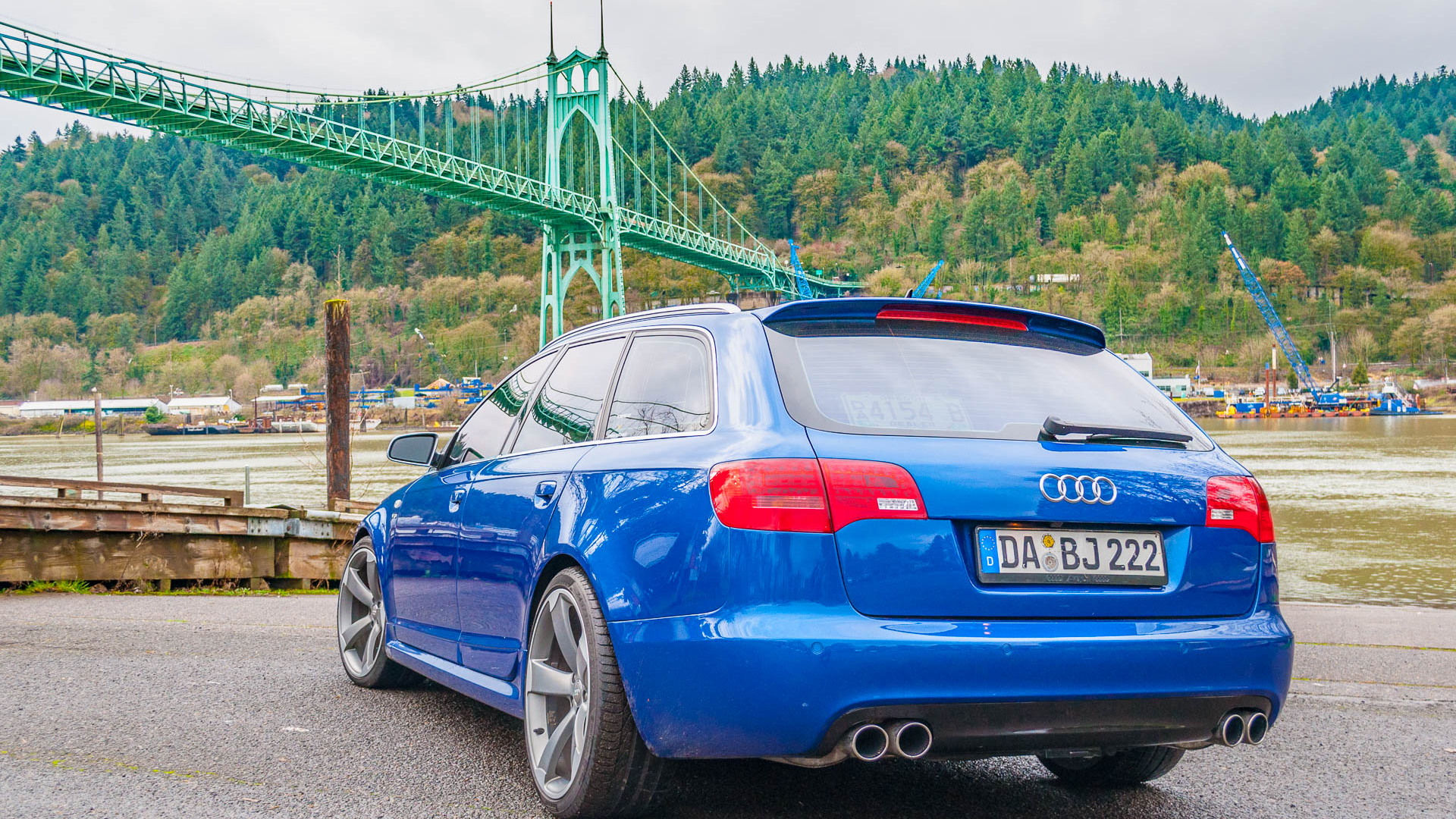 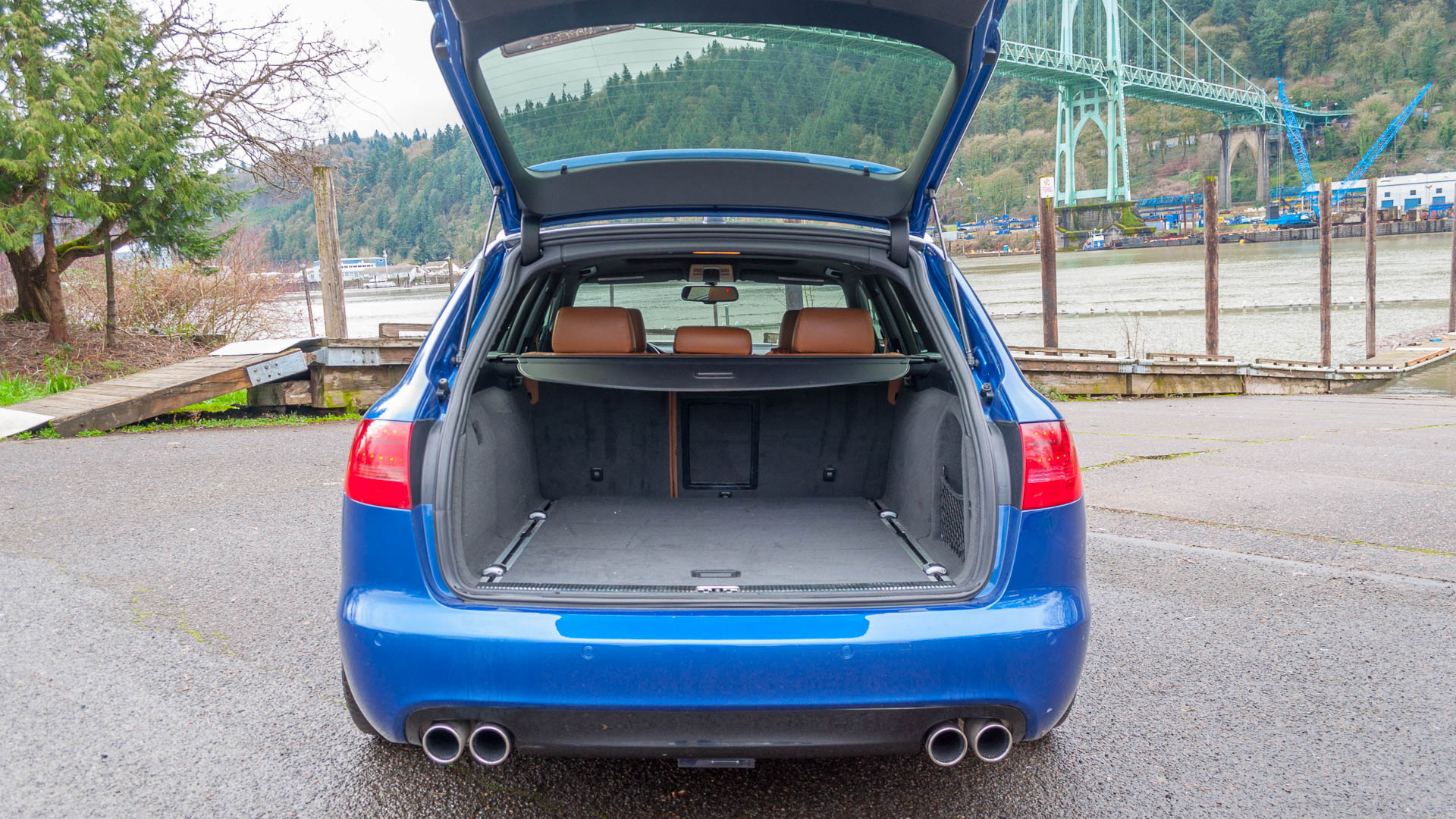 There are only two ways a third-generation Audi S6 Avant makes it to the U.S. It’s either a blackmarket car that was imported here and federalized at a completely absurd cost that isn’t worth it to make it street legal, or, it was custom-built.

It’s real. It’s here in the U.S. It shouldn’t really exist here, and yet, it does.

The best part? It’s exactly as awesome as American enthusiasts have dreamt it would be.

Swapped into the Avant’s body and chassis was nearly everything that made the S6 more than an A6. The heart is an 82,000-mile, 5.2-liter V-10 engine (Fun fact: It’s the same engine that was in the Lamborghini Huracan and Audi R8 V-10 supercars, but in a wagon now.) with a full European tune and codes to make between 435-450 horsepower and around 400 pound-feet of torque. That power goes to all four wheels via an S6 6-speed automatic transmission, and it all rides on the donor S6’s air suspension that was ported over.

One bit that stands out is the braking setup. The front has Porsche Cayenne rotors and calipers while the rear sits with stoppers from an S8.

The look was also updated to be correct with a European tailgate (again, the S6 Avant wasn’t sold here in the U.S.), RS 6 side skirts and S6 door blades, front bumper with RS 6 black optics grille, carbon fiber trim inside the cabin, S6 steering wheel, shifter, 20-inch RS 5 wheels, and for the finishing touch, the donor S6’s gauge cluster. To make it all complete, the entire body was stripped down and repainted in Sepang Blue, a factory S6 color.

Only the donor Avant’s brown interior panels and sport seat remain, which are comfy and aren't as thick as the S6 seats which mean more leg room for rear seat occupants.

What dreams are made of

Push the start button and the V-10 monster fires to life with a chilling, mellifluous cold idle. Reality sets in that this is all happening in a station wagon, which is both absurd and awesome.

Frankencars are weird. Getting throttle steering, and brakes to mesh together is tougher than chewing cement. In this S6 Avant, the skinny pedal is an exception. Give it some juice and its engine roars a glorious note of 10 cylinders firing.

Mash the accelerator pedal and the tachometer spins quickly as the pistons pump, pulling the white needle all the way to 7,000 rpm. The power swells and pushes passengers back into the seats around 3,000 rpm—boy, does this engine like to rev out. A real kick in the pants starts around 4,000 rpm and lasts until the next shift comes.

Weirdly, it feels down on torque compared to the likely around 400 pound-feet it’s pushing. The reason is how the power builds compared to most of today’s engines. This engine is now 11 years old, naturally aspirated, and technology (sequential turbos) has come a long way in making power feel more immediate in the rev band and staying flat until it drops off and the next shift fires off.

The air suspension lowers and raises at the flick of the MMI infotainment controller’s switch, and works just as it should. The ride is stiff, but there’s no thrash as it crosses over highway expansion joints.

Perhaps the most surprising part of this entire thing (the V-10 engine in a wagon notwithstanding) is how heavy the steering is. It’s not obnoxiously heavy, but the lack of boost is perceptible. The front is overly heavy—to be expected when a massive V-10 is put in front of the front axle, Audi—and wants to push as the blue Avant goes around a corner with speed.

Where it falls apart is the braking system. With a Porsche Cayenne setup up front and S8 setup in the rear, stopping power should be plentiful. But for as good as the rest of the Frankencar is, the braking system is where it falls apart. While actual stopping power is strong and present, the brake pedal feels wooden with zero bite. Pushing the brake pedal gives the impression of two pieces of wood being told to grab a steel rotor and come to a stop.

The high of driving a V-10-powered unicorn gets a cold-water shower from reality.

This isn’t a hellcat, it’s not vicious enough. It’s not violent like a Trackhawk. It’s refined, and if one didn’t know better, aside from the brake setup, it might have been built like this from the factory.

This S6 Avant is a well-executed build that makes for one fast executive daily driver that won’t draw attention from the masses.

For enthusiasts, this is the sleeper wagon everyone’s pined for, but Audi wouldn’t give consumers here in the U.S. It lives, in Portland, Oregon, among the Subarus, and that should be celebrated.

Special thanks to our friends at Bridge City Motors for providing the 2007 Audi S6 Avant.