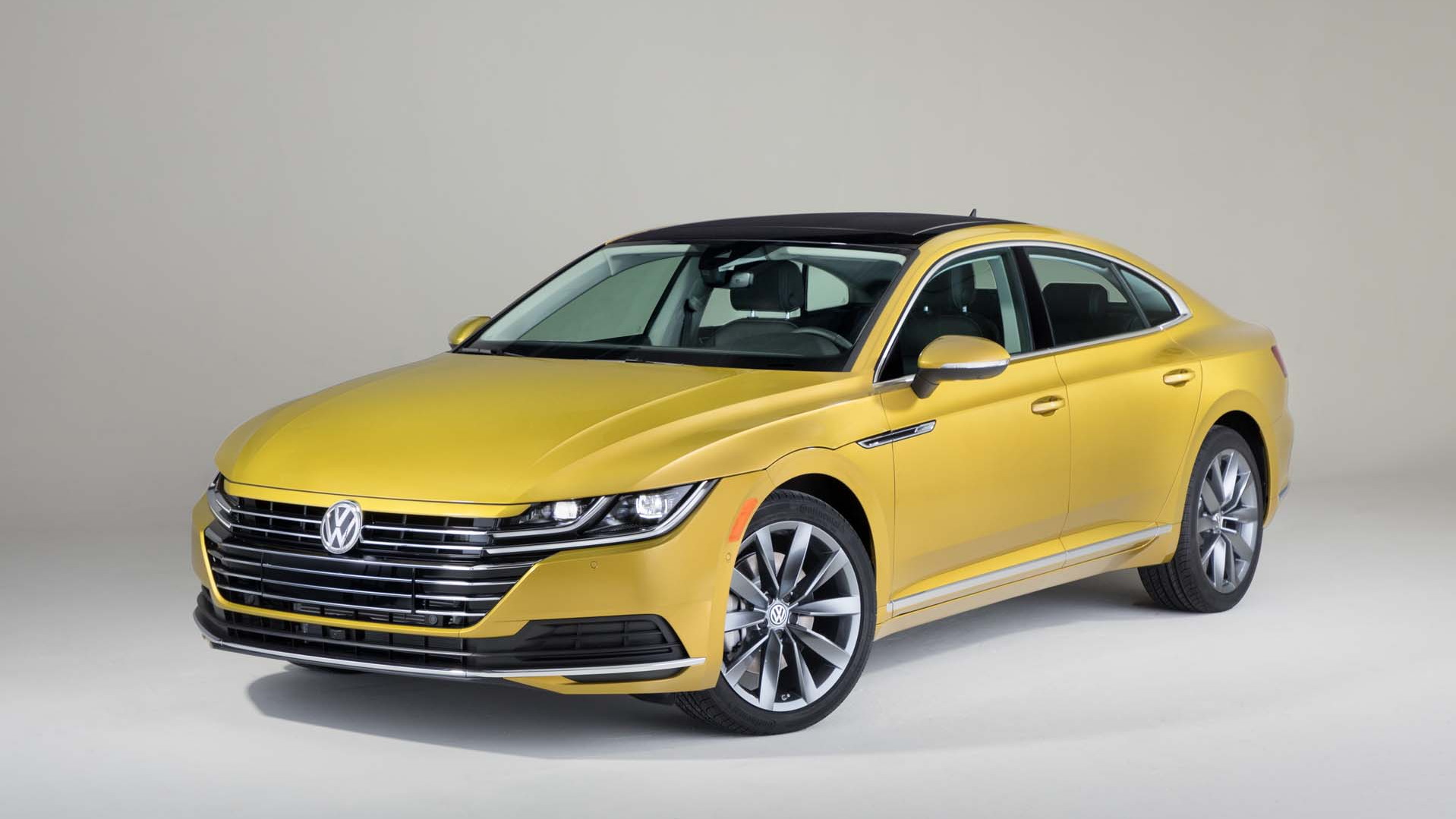 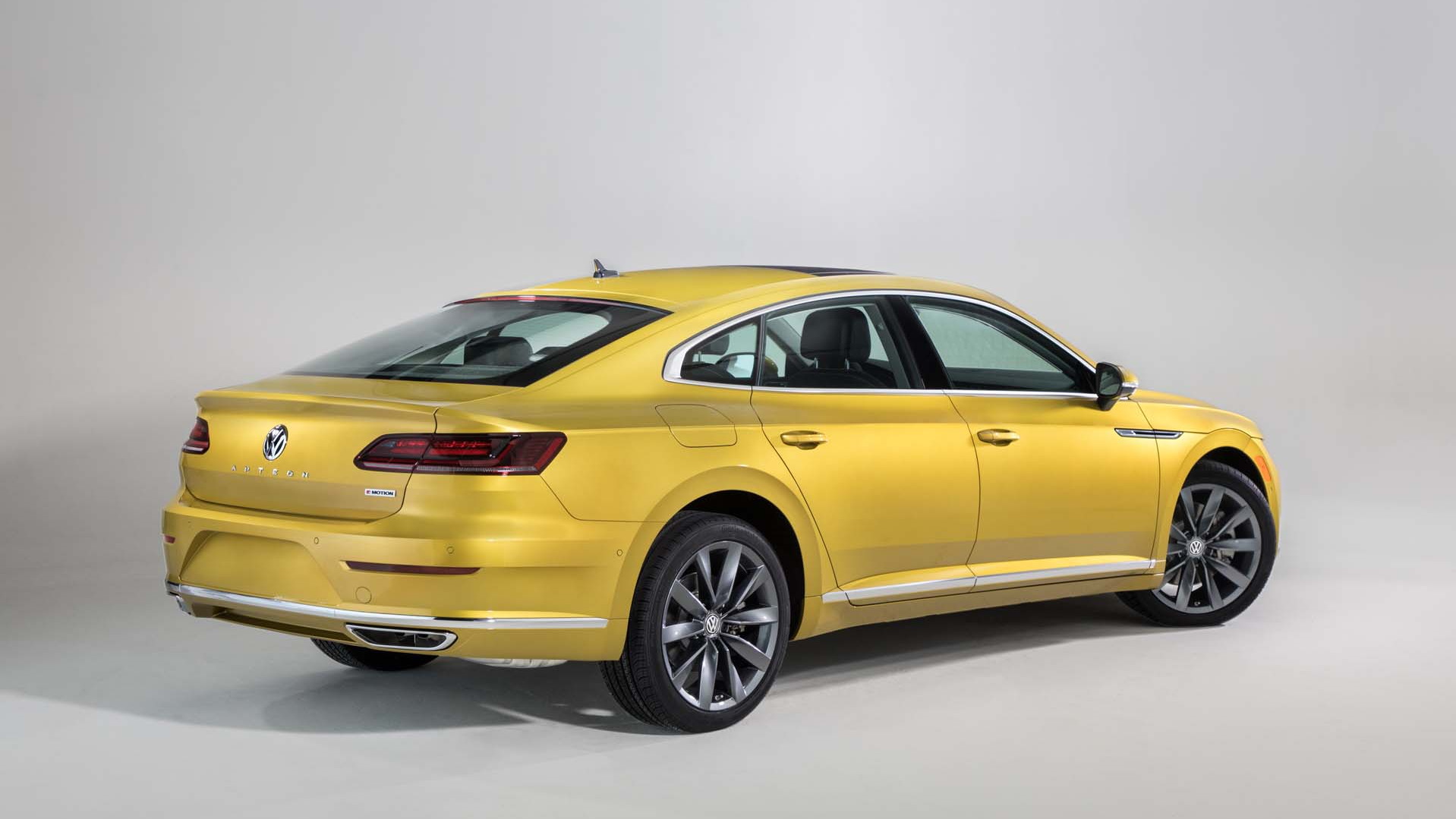 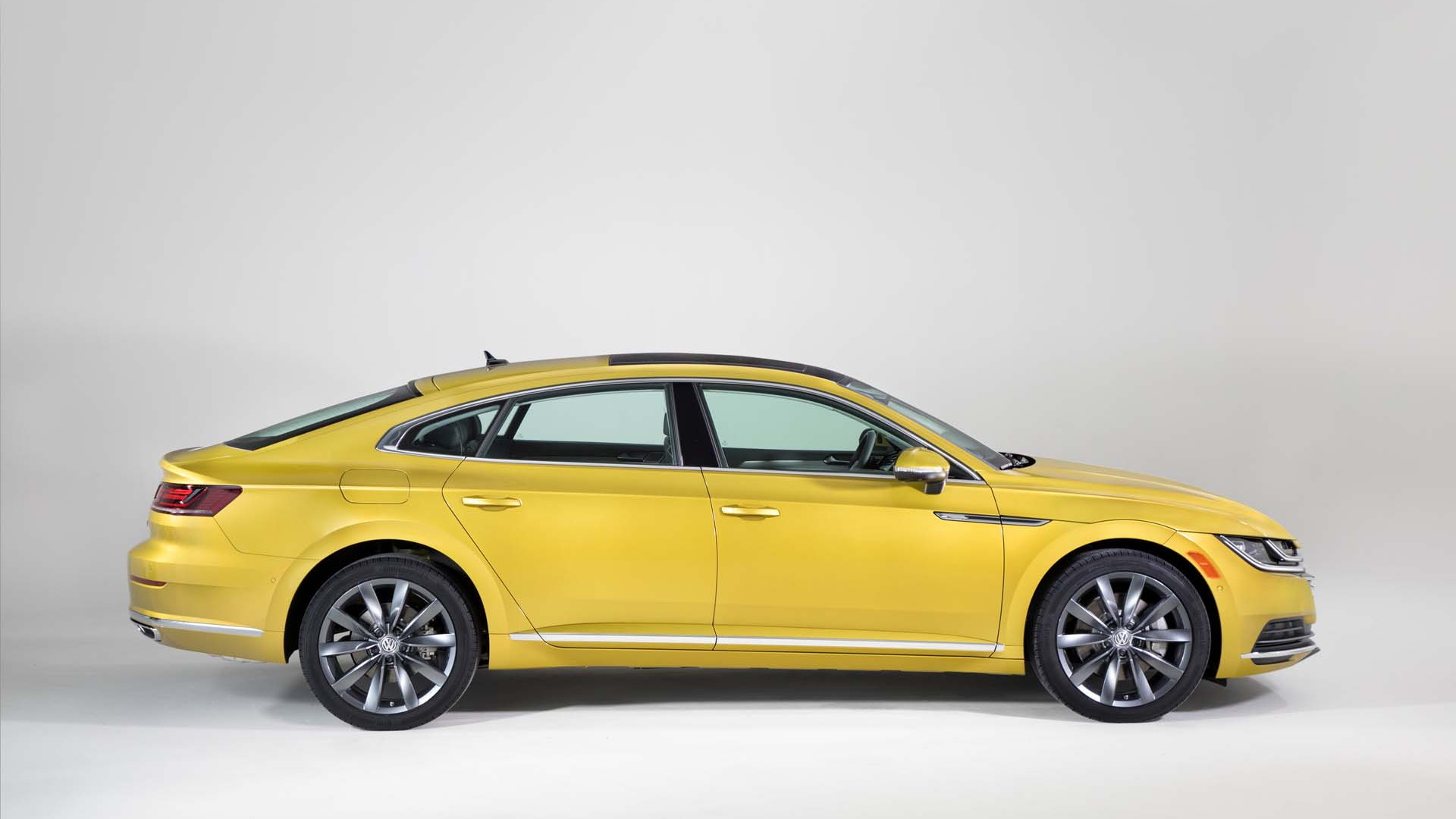 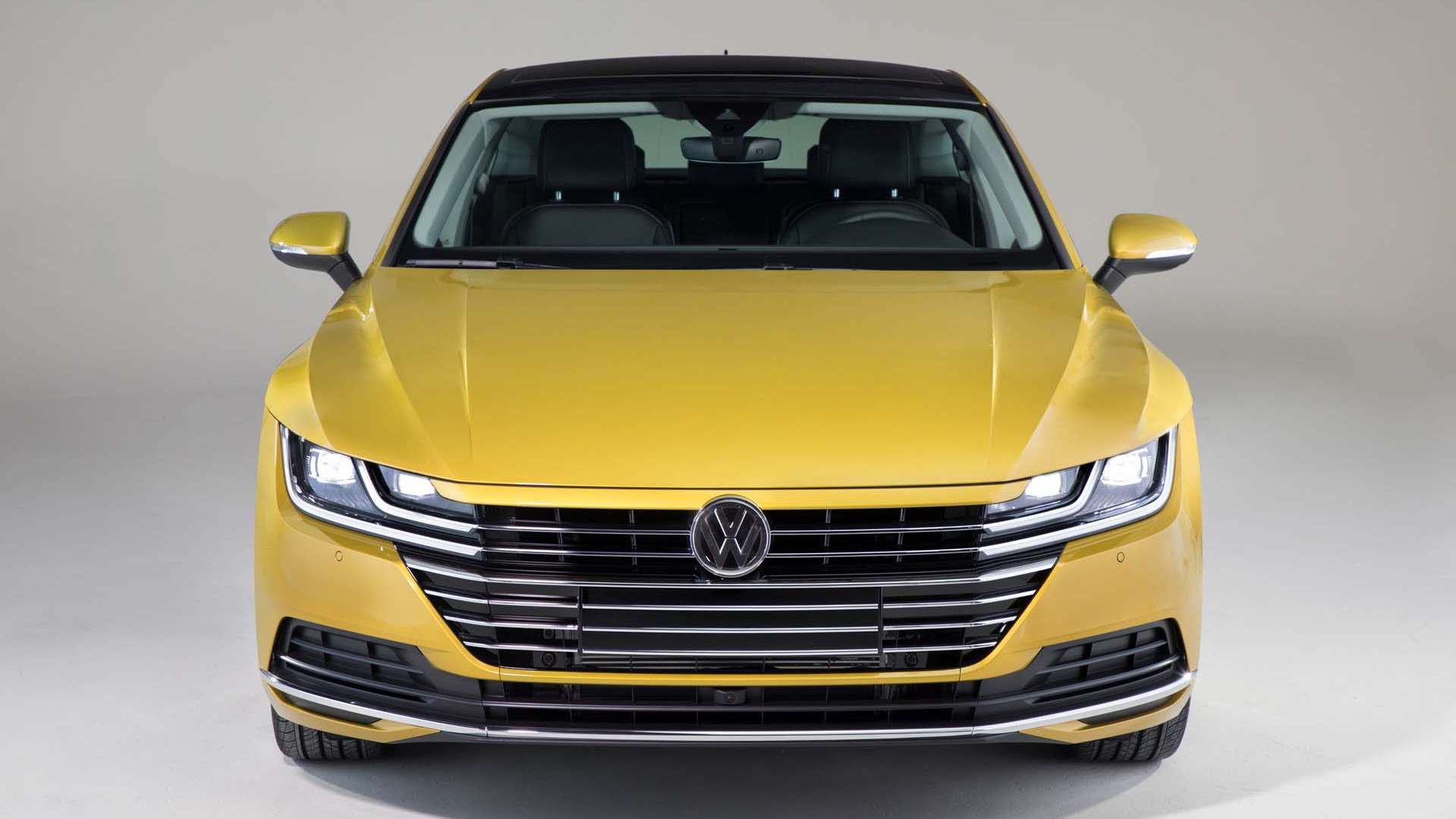 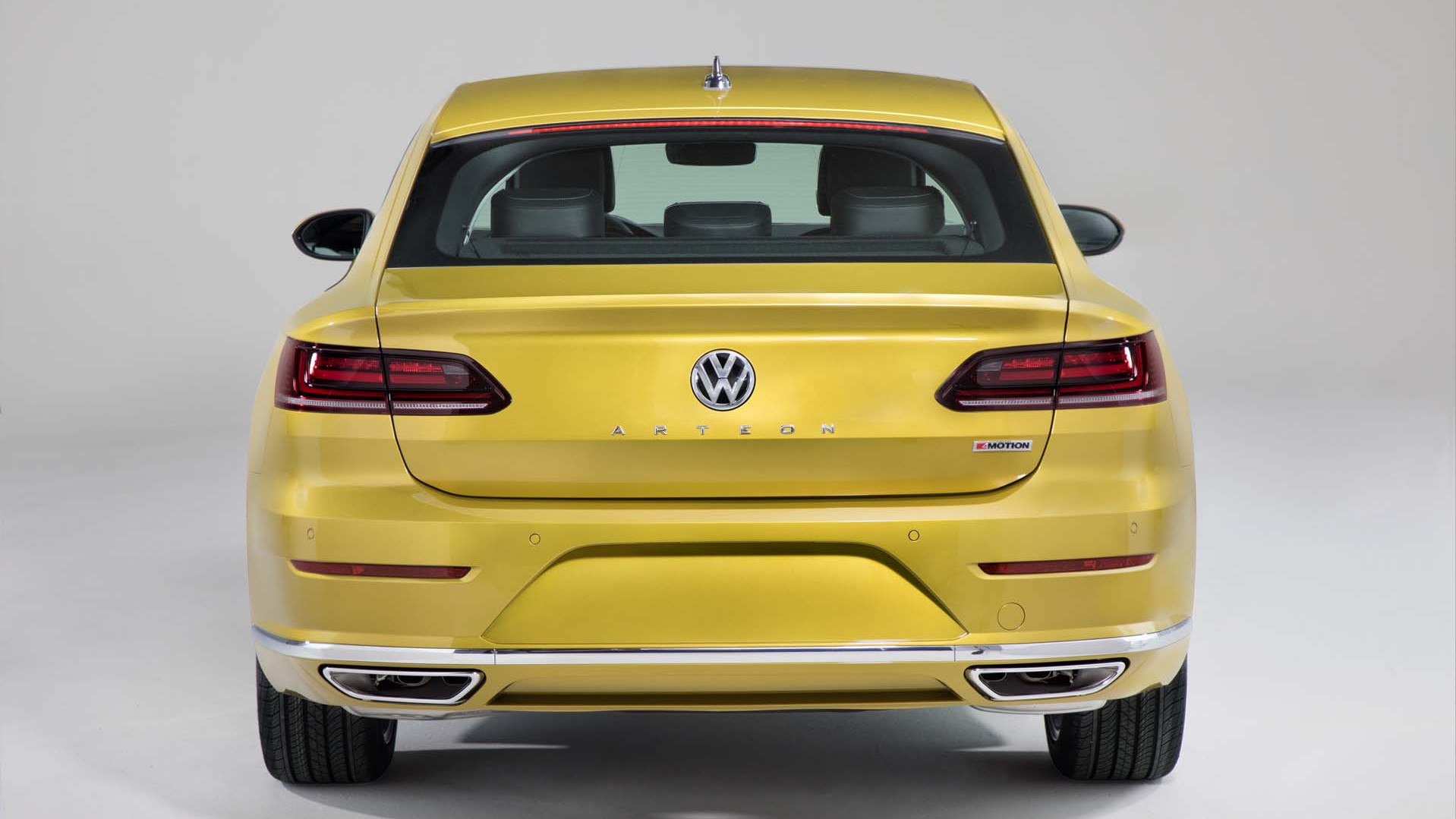 The stylish successor to the Volkwsagen CC arrived stateside Thursday at the 2018 Chicago Auto Show. The 2019 Volkswagen Arteon will go on sale in the fall and replace the CC that's aging quickly from VW lots.

The Arteon benefits from economy of scale, notably scalable architecture that underpins the Jetta, Golf, Atlas—even Audi's TT. The Arteon adds more than five inches between the wheels compared to the CC, and pushes its wheels closer to the corners for a sportier shape.

While identifiable as a Volkswagen, the Arteon strays from the CC's shape with angular details around the sides and a clamshell hood that wipes shunt lines from the hood, similar to the Audi A5 Sportback. The similarities with Audi's four-door coupe don't end there: the A5 and Arteon share nearly identical wheelbases (111.2 and 111.9 inches) and their overall mass should be nearly the same at more than 3,700 pounds in base configuration.

Under its hood is a standard 2.0-liter turbo-4 that spins out 268 horsepower, which is 34 percent more power than the outgoing CC, mated to an 8-speed standard automatic. Other versions sold around the world can be equipped with VW's 7-speed dual-clutch automatic, but the 8-speed in the U.S. speaks to the Arteon's efficiency mission (for now) and VW's stated intention to make the Arteon a grand tourer and not a performance fastback. Available all-wheel drive will undoubtedly help the Arteon carve a tighter line around corners, and standard adaptive dampers should make the most of its running gear. An R-based performance version may be in the works, but VW execs are staying quiet for now.

With more space between the wheels, the Arteon should be exponentially more comfortable than the CC, which lacked rear seat room—particularly head space. Volkswagen said the Arteon will be equipped with 18-inch wheels as standard, with 19-inchers available in top trims.

Inside, standard synthetic leather and dials give way to nappa hides and VW's digital instrument cluster in top trims. Volkswagen hasn't yet announced pricing for the Arteon in the U.S., but it's likely to start in the mid-$30,000s. For more coverage of the 2018 Chicago Auto Show, head to our dedicated hub.