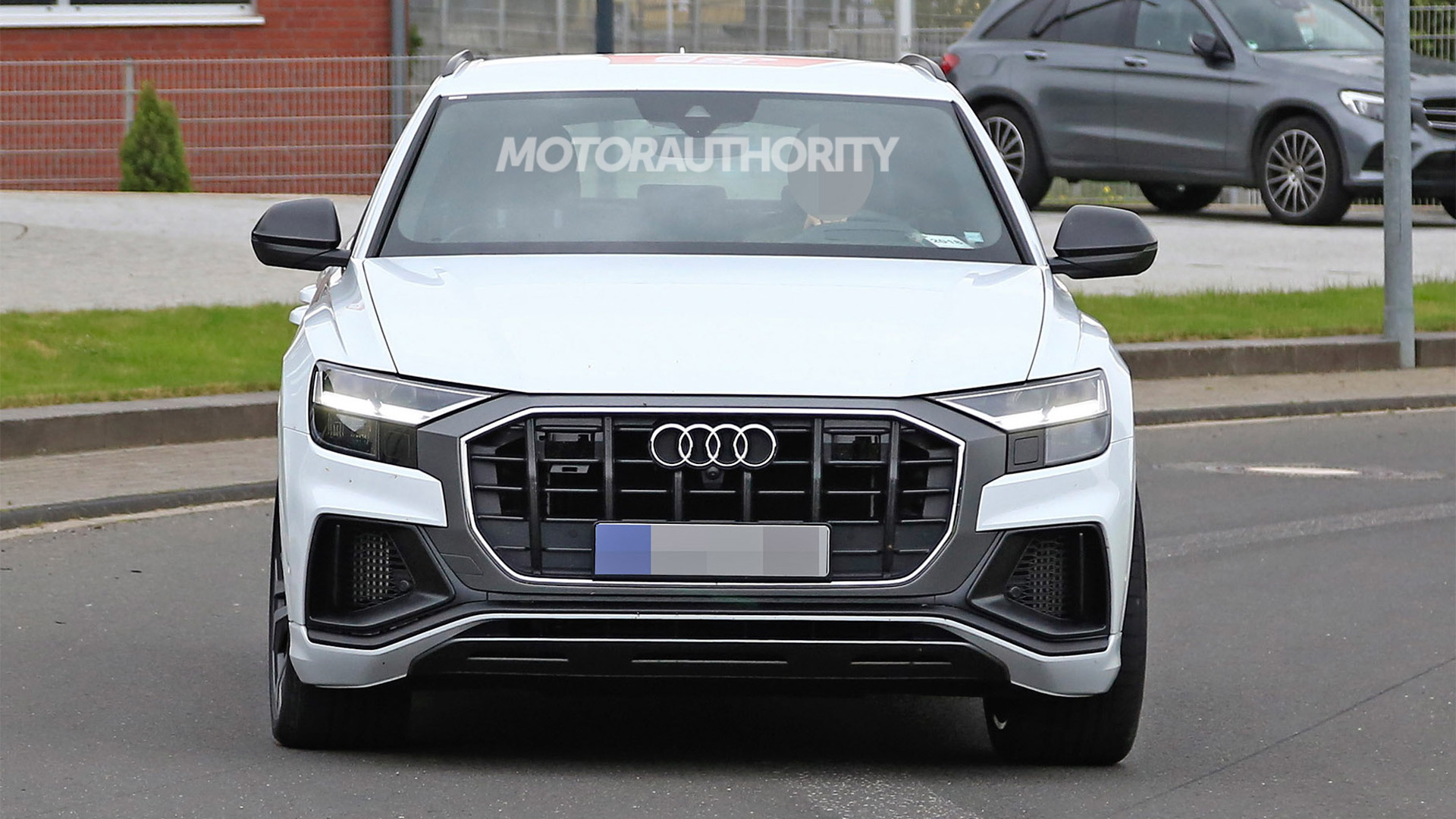 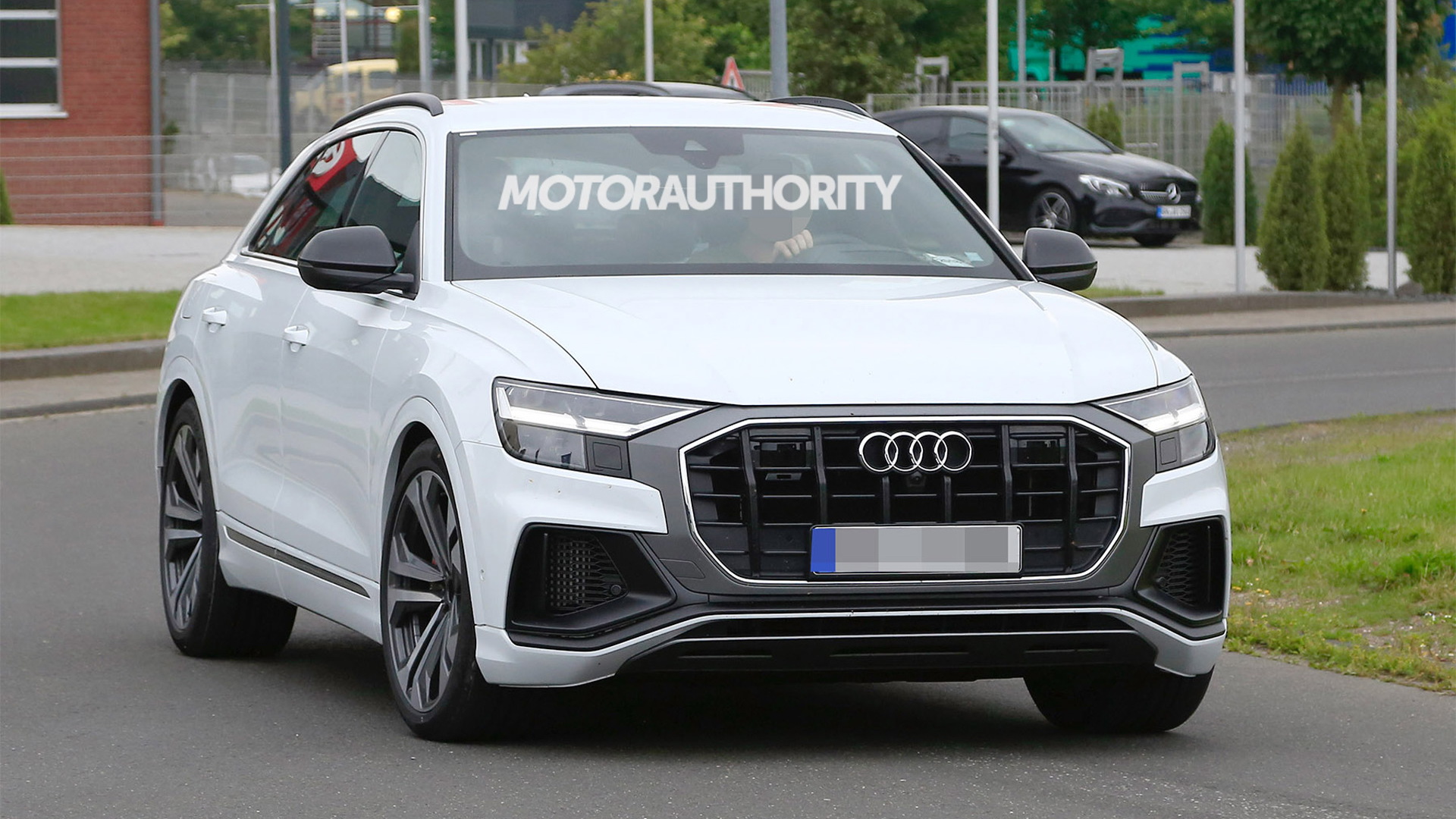 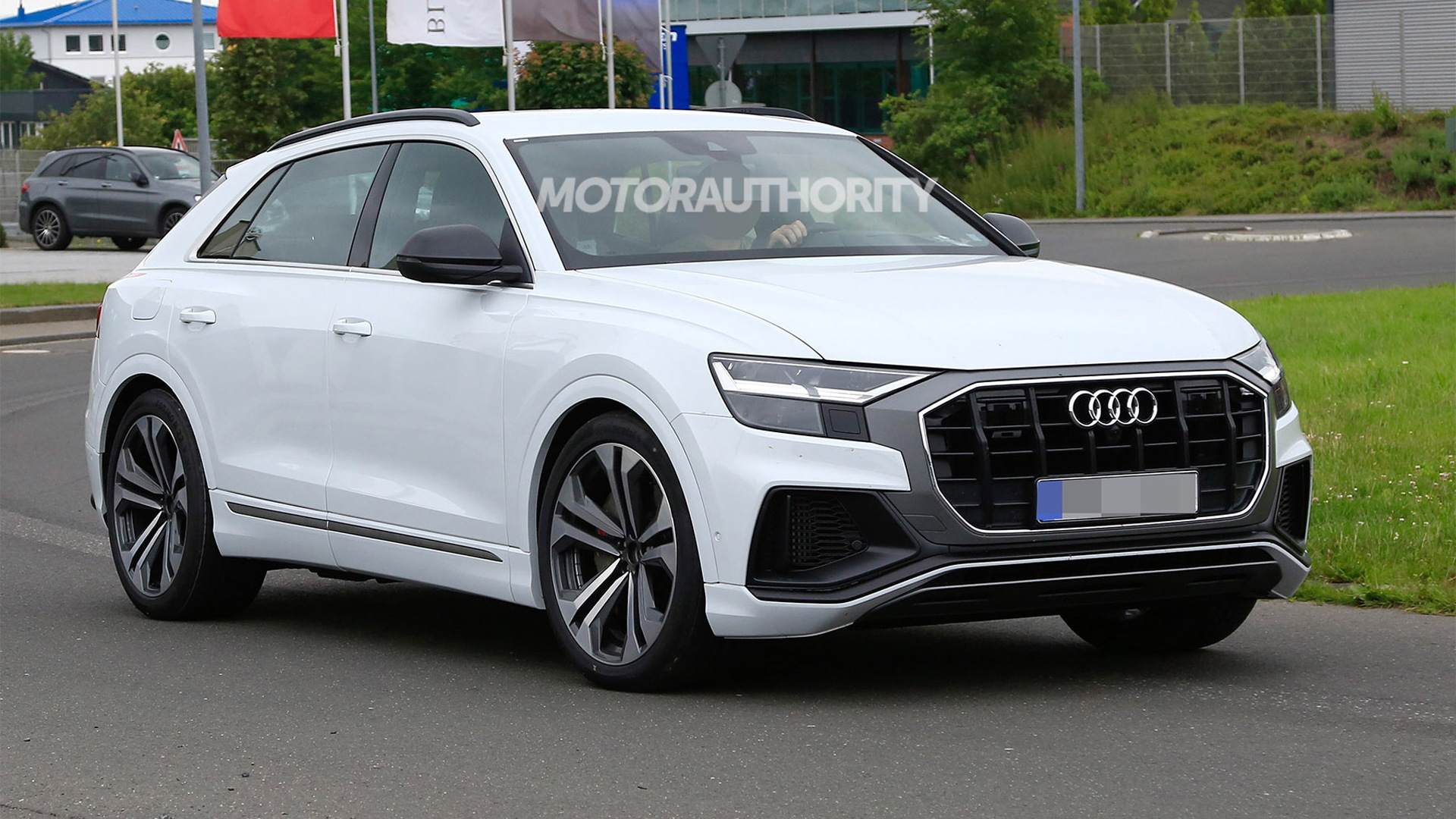 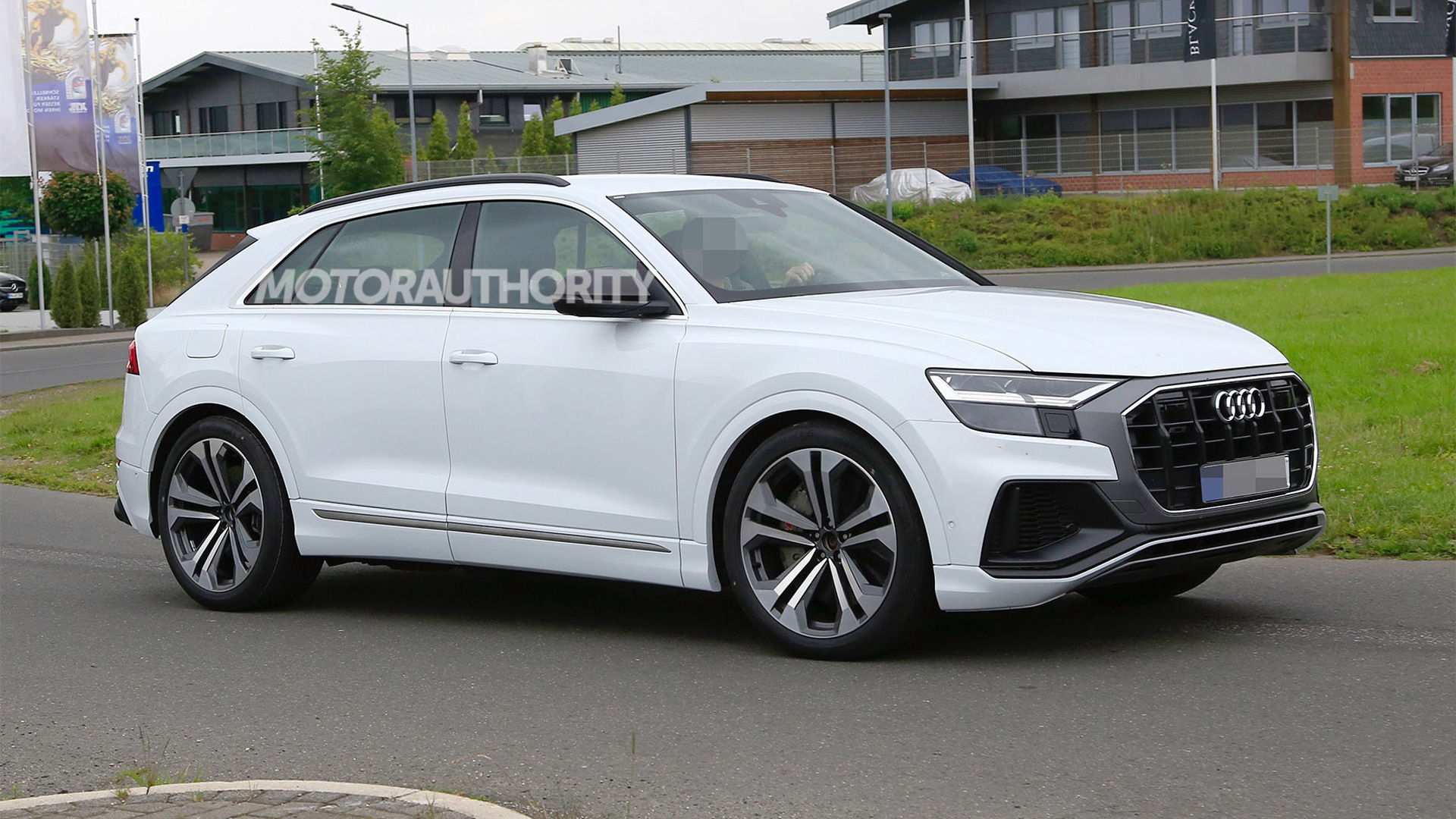 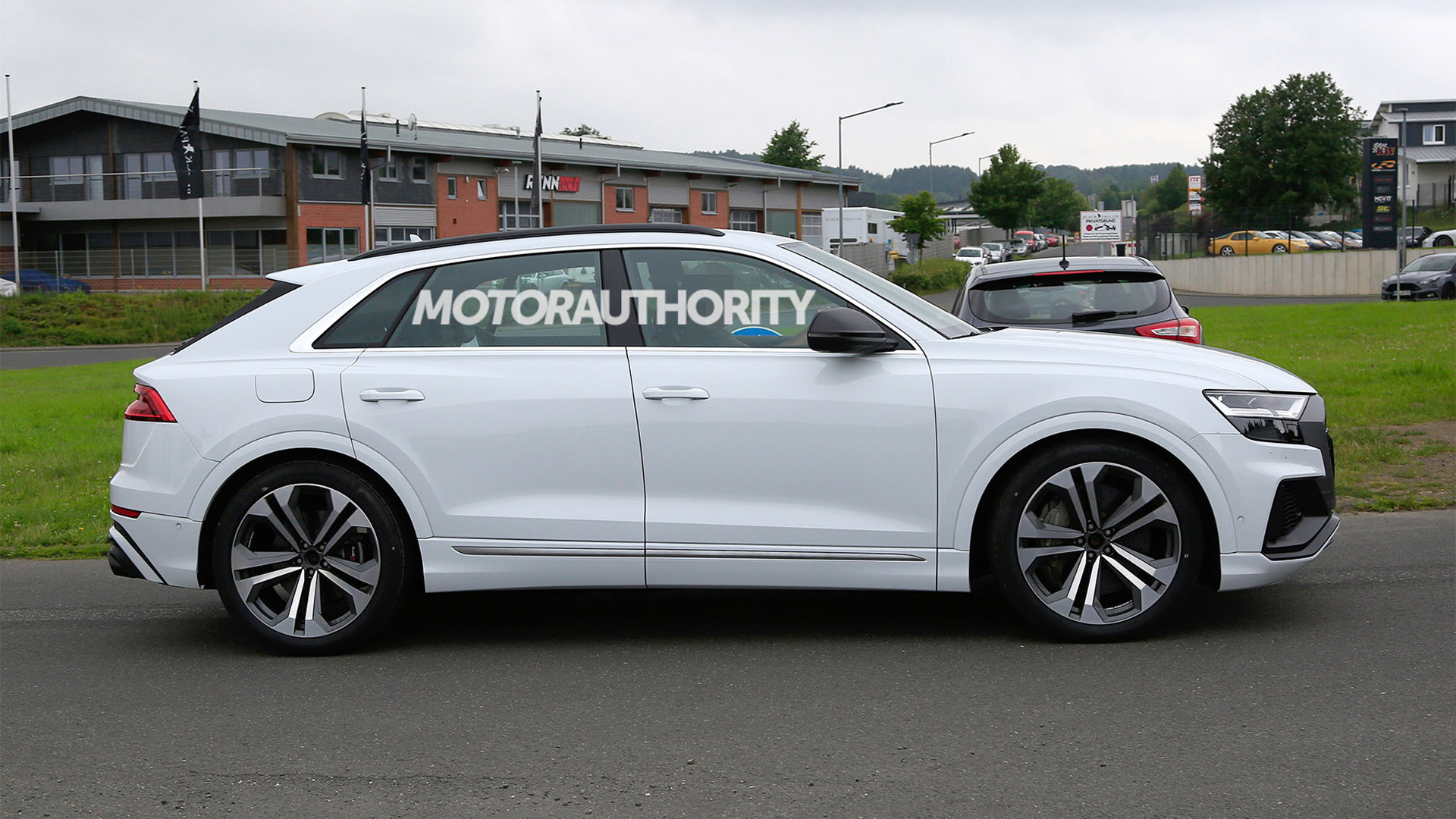 Today we have spy shots and video of the sporty SQ8 variant which should arrive in showrooms roughly alongside the standard Q8 later this year. Further down the track there will be a fully fledged RS Q8 joining the fold. Audi trademarked the names of both performance SUVs in the recent past.

The Q8 is a coupe-like SUV similar in size to the Q7. It's a rival to the BMW X6 and Mercedes-Benz GLE Coupe, so presumably any SQ8 would rival sportier alternatives of those vehicles, i.e. the X6 M50d and Mercedes-AMG GLE43 Coupe, respectively. The RS Q8, meanwhile, will go after the X6 M and GLE63 Coupe.

We know the latest prototype is for an SQ8 because of the dual-exhaust tips integrated into either side of the rear fascia. The prototype also rides a bit lower than the standard Q8.

Differentiating the eventual RS Q8 will be more aggressive front and rear fascias, flared fenders, a pair of oversized oval exhaust tips (one on either side of the rear bumper), and uprated wheels, tires and brakes. The Q8 Sport concept from the 2017 Geneva auto show hints at what an Audi Sport-developed Q8 might look like.

As for the powertrain in this SQ8, the Q8 Sport concept might once again provide inspiration. It paired a 3.0-liter twin-turbocharged V-6 with an electric motor for a combined 469 horsepower and 516 pound-feet of torque. The setup enabled 0-60 mph acceleration in a brief 4.7 seconds.

There’s a good chance Audi will also develop an SQ8 TDI for the European market. This one would pack the 429-hp 4.0-liter twin-turbocharged V-8 diesel found in the SQ7 TDI.

We’d expect the RS Q8 to be offering more than 600 hp, likely via a V-8 or possibly a V-8 working in conjunction with an electric motor. The latter system in Porsche’s Panamera Turbo S E-Hybrid is already delivering 680 hp.

Stay tuned for the full reveal in the coming months. A debut at the 2018 Paris auto show this October is a strong possibility.