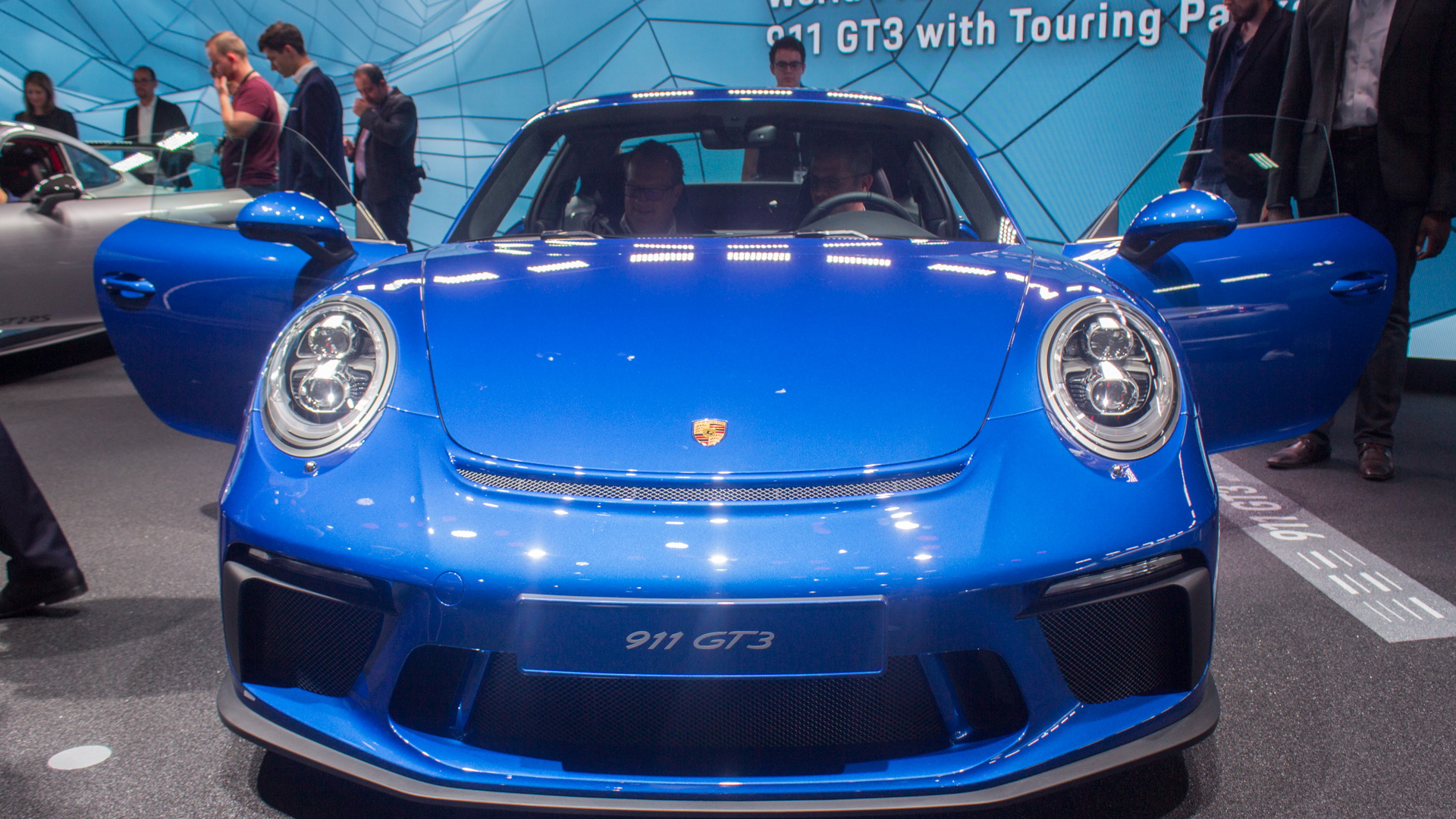 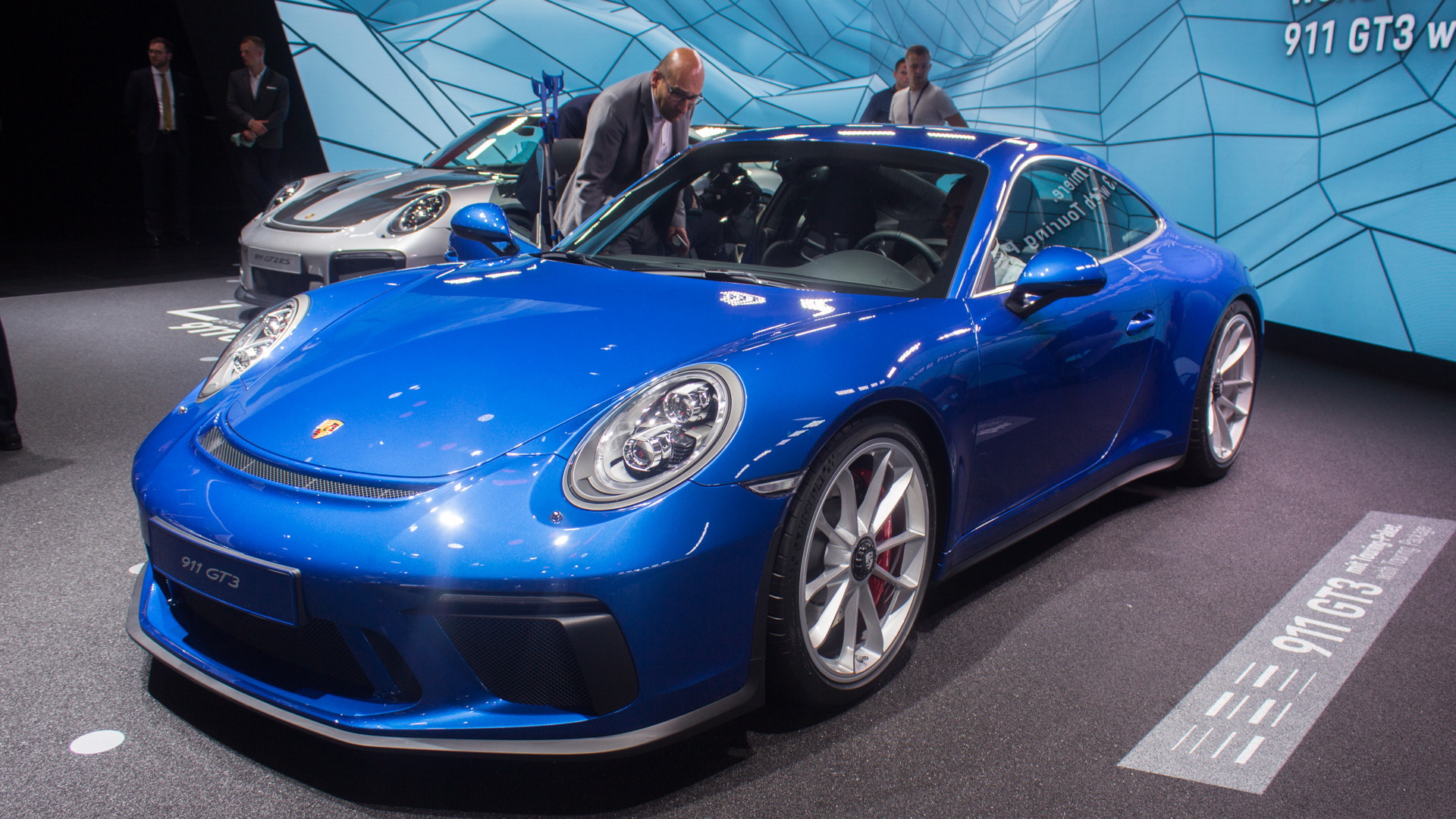 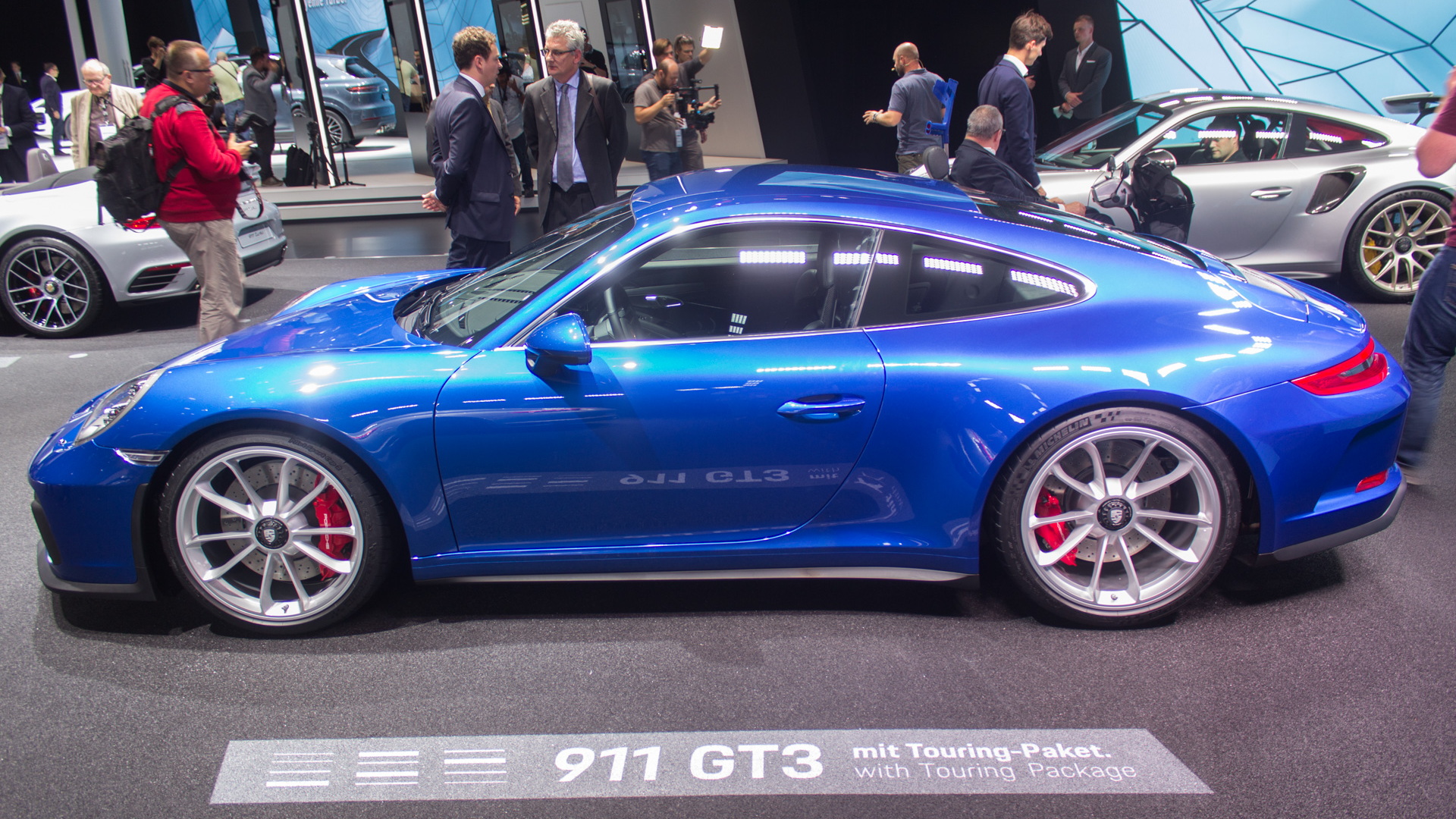 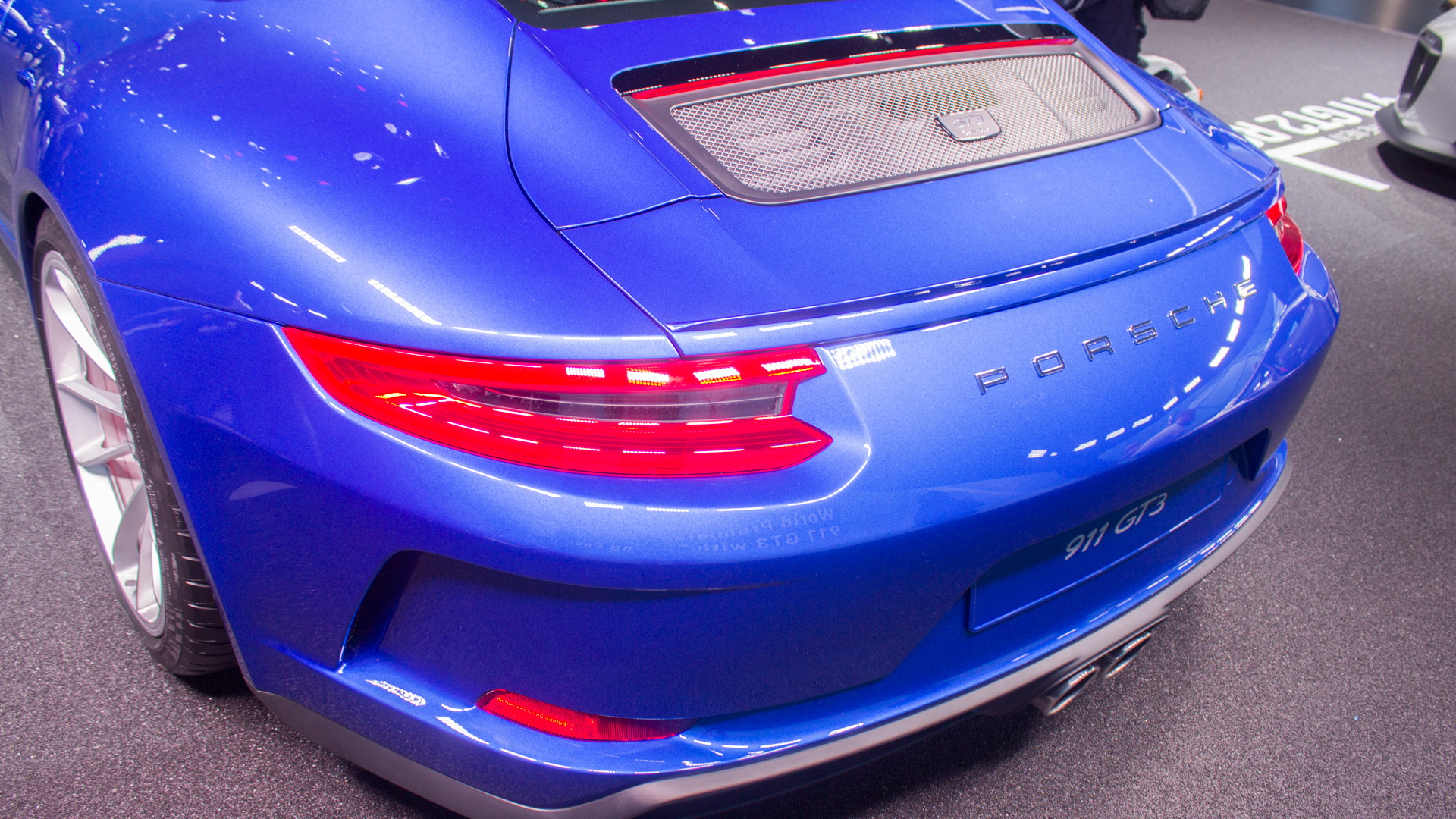 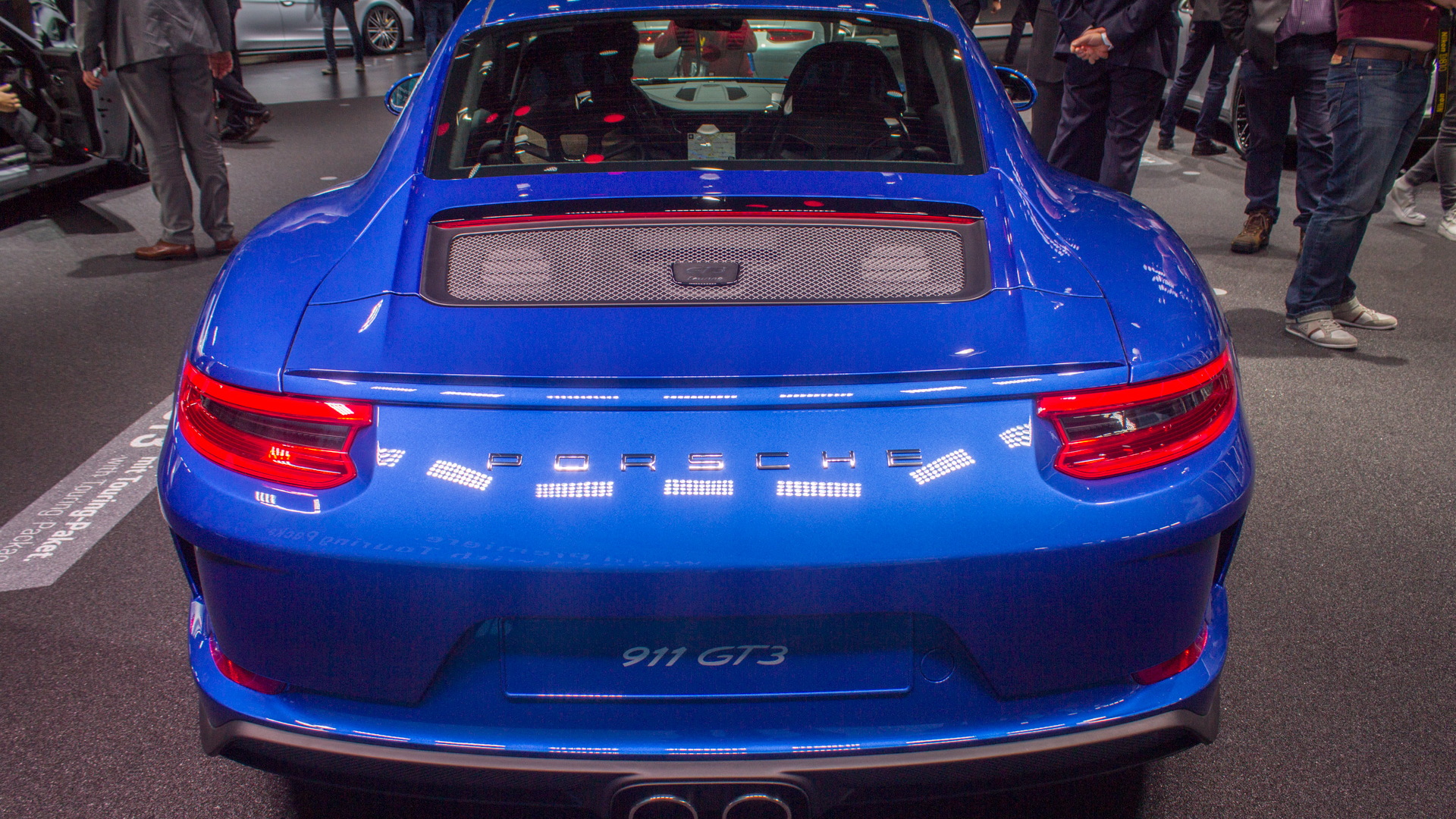 Porsche has been promising a purist sports car for the regular production 911, but on Tuesday at the 2017 Frankfurt Motor Show, the German sport car maker showed a toned down version of the 911 GT3.

It's not exactly the stripped down base 911 we've been hoping for, but it has more than a few cool features of its own.

The 911 GT3 with Touring Package is easiest to spot by its adaptive rear spoiler. Instead of the GT3's standard fixed spoiler, it has an adaptive spoiler just like other base 911 models, though it adds an aerodynamic lip, otherwise known as a Gurney flap, finished in body color.

The decklid also has a "GT3 touring" logo, and Porsche uses silver trim for the side window surrounds, tailpipes, Porsche logo, and headlight washer system covers. Unlike other GT3s, the front turn signal lenses and the taillights are not tinted unless you opt  for the Touring Package – Exterior in Black option, which also colors those aforementioned trim elements black.

The 911 GT3 with Touring Package is also notable because it's offered only with the 6-speed manual transmission.

The interior has two seats like other GT3s, but it uses leather where the others use Alcantara. The steering wheel rim, shift lever, door panel armrests, center console lid, and interior door handles are upholstered in leather. The seats are leather with black fabric inserts, and their headrests have embossed Porsche crests. Black thread is used for all the stitching, and the trim is black brushed aluminum.

Otherwise, the GT3 with Touring Package is much like the standard GT3. It has the same 4.0-liter flat-6, making the same 500 horsepower and 339 pound-feet of torque. It takes the same 3.8 seconds to sprint from 0-60 mph. Its top speed, however, is a paltry 196 mph, down from 198 mph, likely due to the change in spoiler. Buyers can choose almost any option from the standard GT3 options list, save for the Alcantara bits.

Porsche says the name “Touring Package” recalls a variant of the 911 Carrera RS from 1973, but the manual-only, wingless GT3 seems suspiciously like a new take on the 911 R. It doesn't get the R's carbon fiber components, however, Porsche makes no mention of limited production, and the price is considerably lower than the 911 R's $185,950.