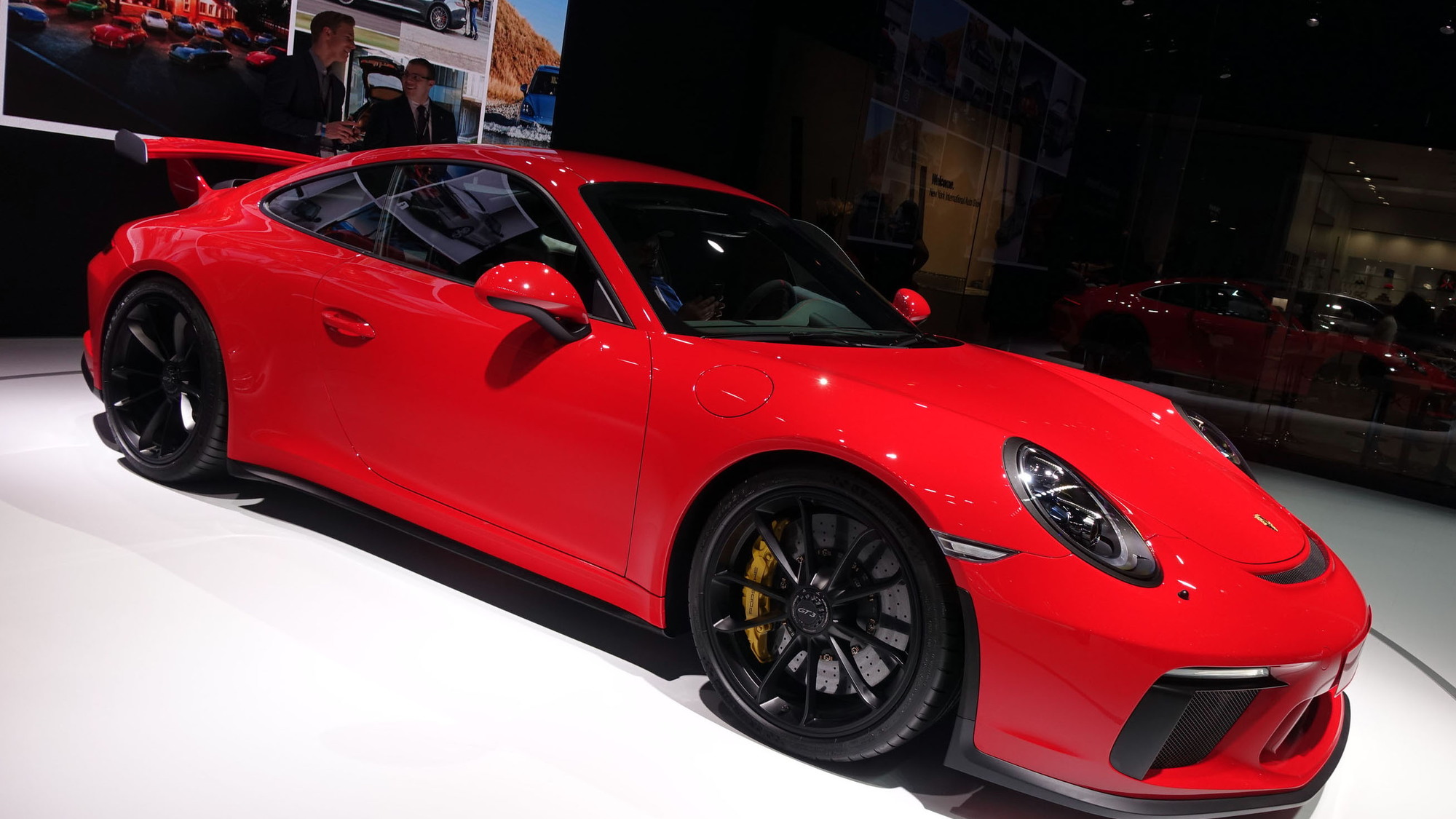 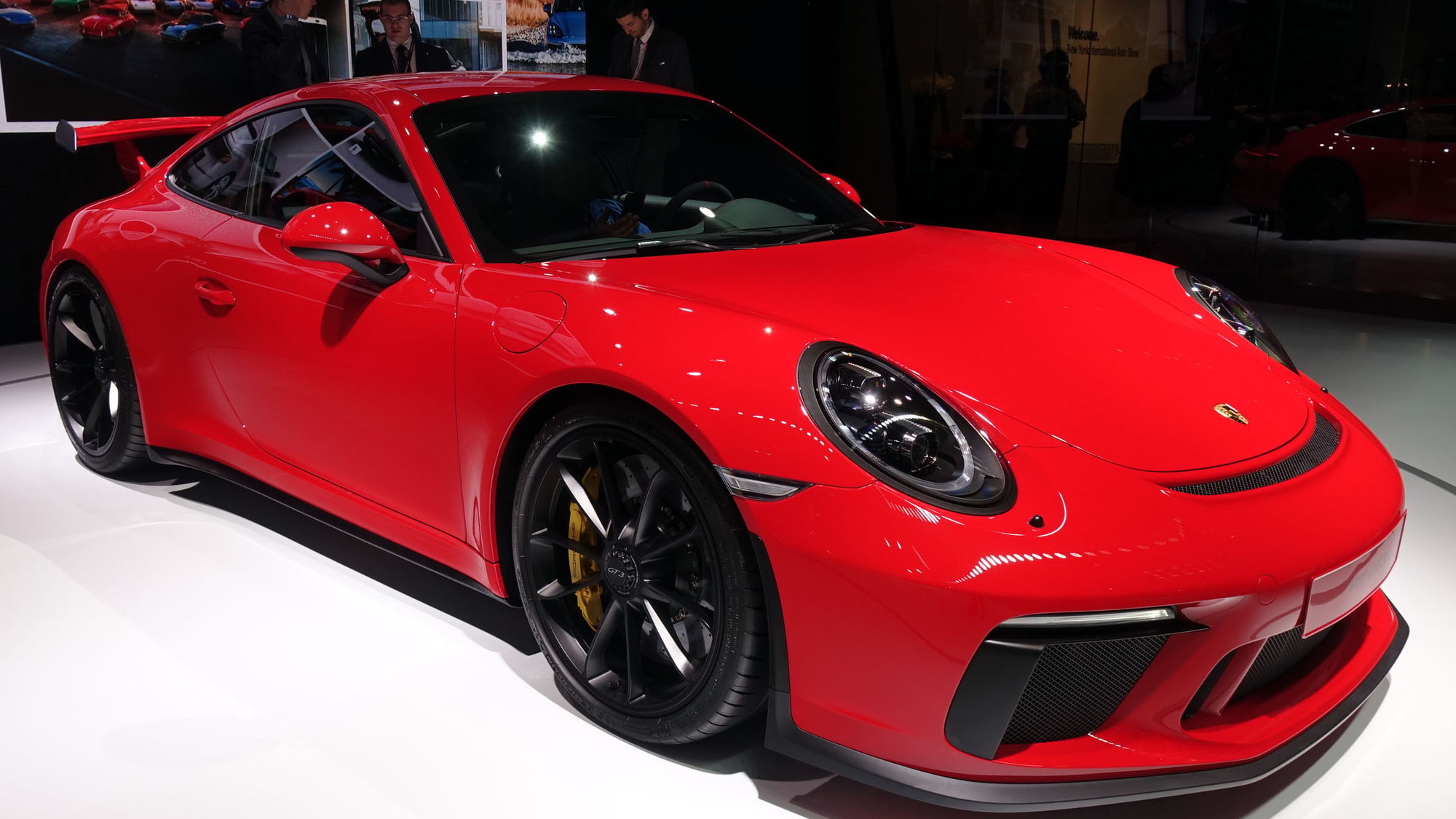 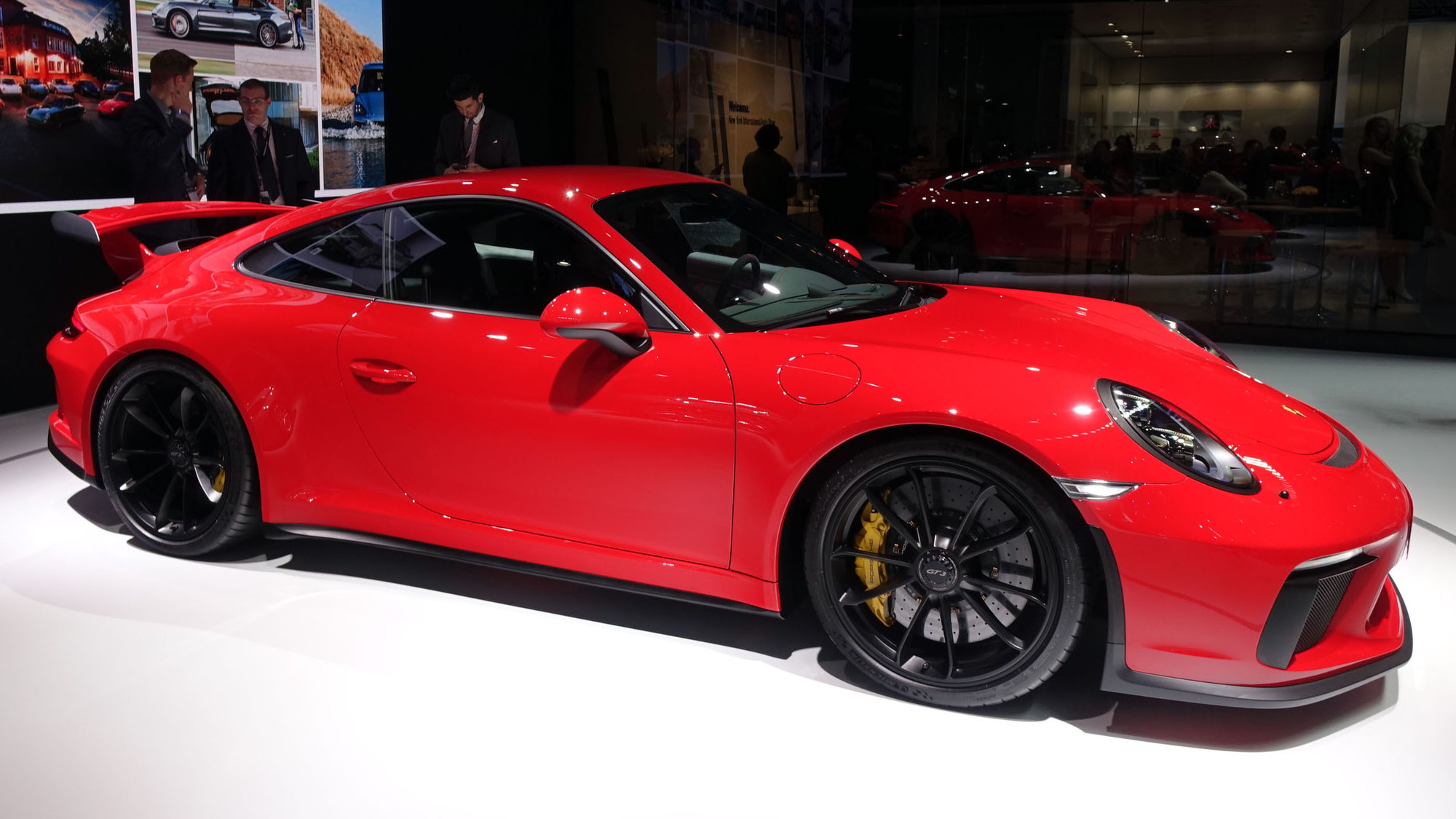 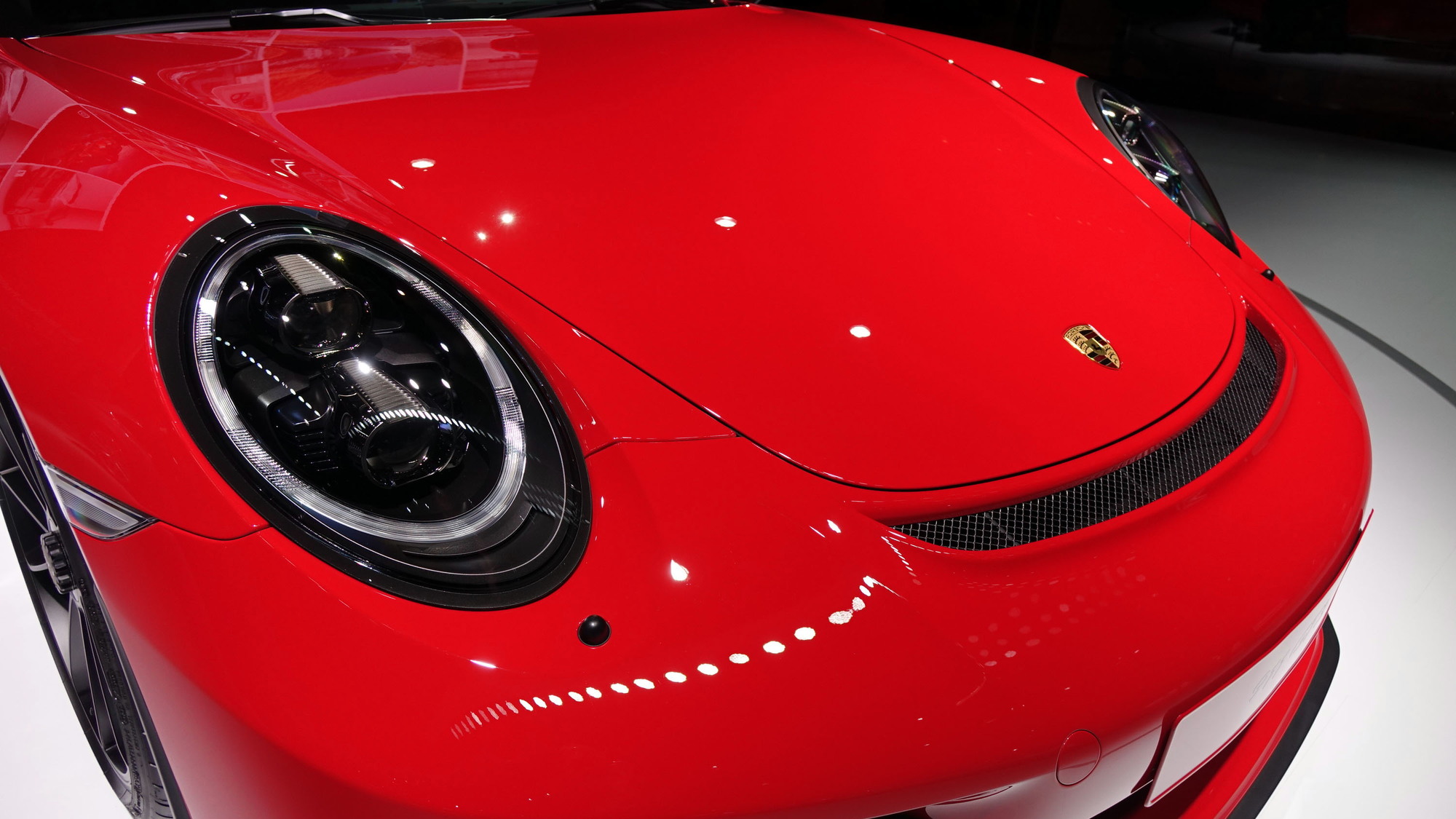 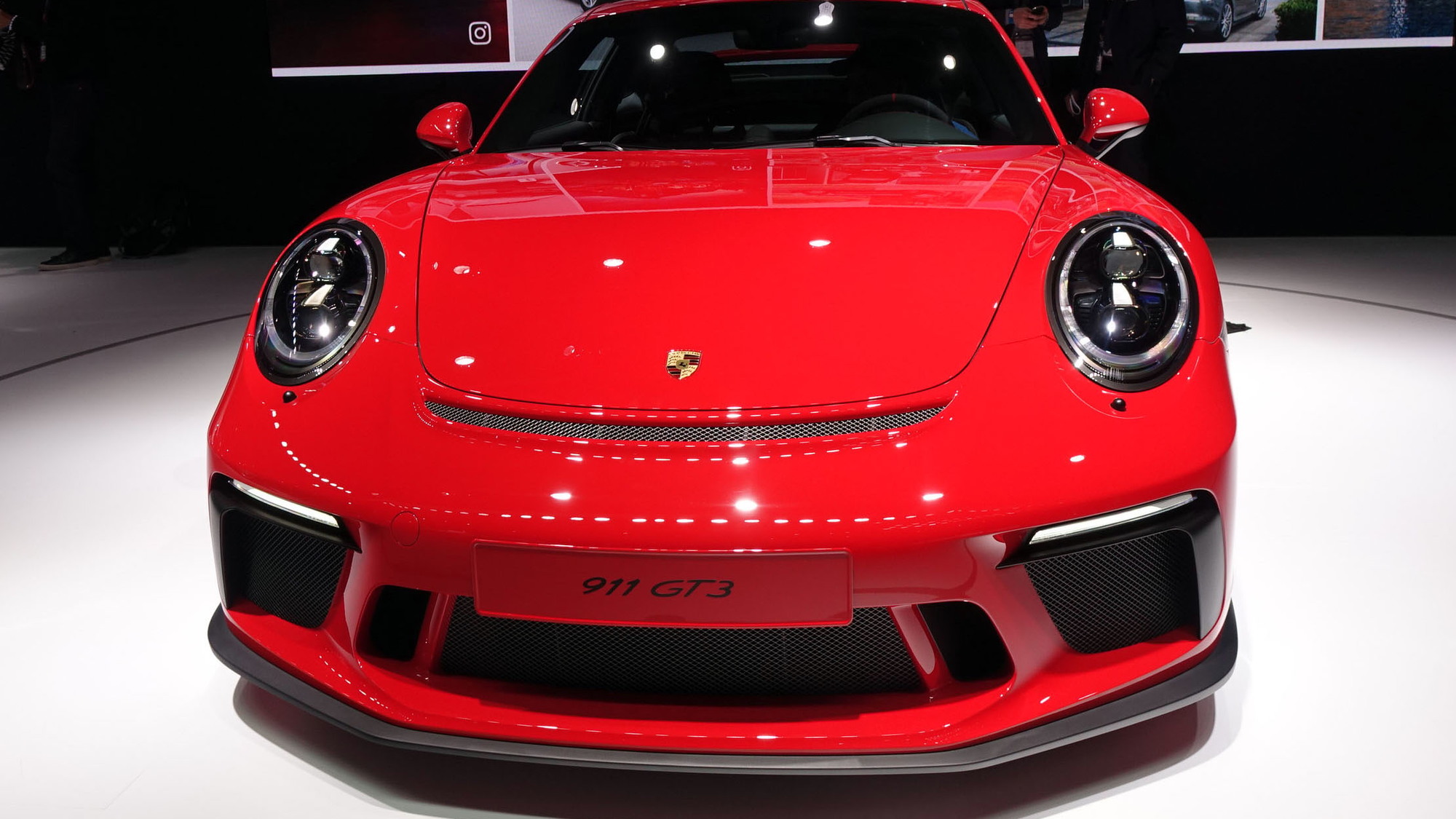 “People are discussing lap times that they can never achieve themselves over a beer,” Preuninger said. His tone reflected less interest than a checking account.

“We’re chasing a feel. We want to address the car’s driver’s attributes. Our experience is to have the best lap times—to be very competitive—with certain models. But we shouldn’t forget the driver’s side of everything,” Preuninger said.

That approach adds context to the 6-speed manual making its return to the 2018 Porsche 911 GT3. It also adds subtext to the car’s refresh, which made its local debut at the 2017 New York auto show on last week.

“The car has to give confidence to the driver to push his own limit safely. To set up a car that way, you will get a rewarding car. There are some cars that can only be driven in a special way that mostly only professionals can do and this not what we’re looking for in GT3,” he said.

Despite sitting atop the 911 range—for now—the new GT3 was designed to be more approachable and progressive than some may be expecting, Preuninger admitted. That’s not to say that a car with 500 horsepower, 339 pound-feet of torque, and sub-4 second 0-to-60 mph times is slow—but those numbers live in a place left for bar bets between friends, he said.

“The car will never bite you. You can lean hard on the car without it making any unwanted moves. It’s not a boring car—there’s no understeer—but it’s also forgiving,” he said.

To get the qualitative feeling, Preuninger admitted that there was a quantitative effort to nail the small details.

The engine’s iron-based cylinder coating was patented by Porsche for its extreme low-friction qualities and efficiency. Preuninger won’t discuss many details—other than it’s not a ceramic compound—because it’s a direct link to Porsche’s race program.

“It’s very effective, let’s put it like that,” he said.

He stops at that because he doesn’t want the GT3 to be about cylinder coating.

“A coating of a cylinder wall is maybe not the primary reason that someone buys the car. So it’s a small fragment of a huge modification program—and this is just part of it. Just a fragment in a big puzzle,” he said.

Small improvements such as the low-friction improvements to the engine and the GT3’s new underbody aero let Preuninger take the same basic recipe, but with better results.

Better underbody aerodynamics—especially at the front end—helped his GT team increase overall downforce in the 2018 Porsche 911 GT3 by 20 percent without increasing the overall coefficient of drag. This year’s car still cuts the same hole in the air as the last car, 0.33 in both.

Preuninger attributed increased aerodynamic efficiency to a new wind tunnel at Porsche that better simulated a rolling road underneath the cars to sculpt air flow through the diffusers.

That may have a better home in the GT3 RS, which Preuninger said has been a more track-focused car, but for the base GT3 aero efficiency feeds better into creating a more balanced suspension setup—and one that can communicate directly to drivers. A 991.2 GT3 RS version hasn't been announced by Porsche, although a prototype has been spied running laps.

“You can only be quick in the car when it’s giving you a lot of information about what’s going to happen in the next split second. Our goal is to set the suspension in a way that a good driver can notice that and react from that,” he said.

The ultimate expression of its communication back to the driver may be this year’s inclusion of a manual transmission into the GT3, which was brought back after Porsche fans screamed for a stick.

Tossing in a 6-speed manual where the PDK shifter lives wasn’t as simple as swapping boxes and adding a third pedal, Preuninger said. He planned on the 991 GT3 to “forever” have a manual transmission, but added that development on the new platform—including rear-wheel steering—was too busy in the beginning to develop suspension settings for a row-your-own option in the 991.1 GT3.

The manual version of this 991.2 GT3 has different stability control settings, retuned damping, and obviously different anti-lock brake balancing to accommodate the transmission’s 33-pound weight savings. Utilizing a dual-mass flywheel for the 6-speed manual transmission, which was lifted from the 991 R but doesn’t share any common part numbers in the GT3, meant that the GT3 manual is quieter and more sedate than the 991 R’s 6-speed with a single-mass flywheel.

Preuninger said the manual GT3 has a different torque delivery than the PDK version, but smoothing over those edges to connect the driver and the car meant a long engineering setup to get perfectly right.

Those improvements led to a car that would be reflected in the drivers’ smiles getting out—maybe not lap times that would be impossible without a pro behind the wheel.

“You can’t quantify feeling. Feeling is quality, not quantity,” he said.