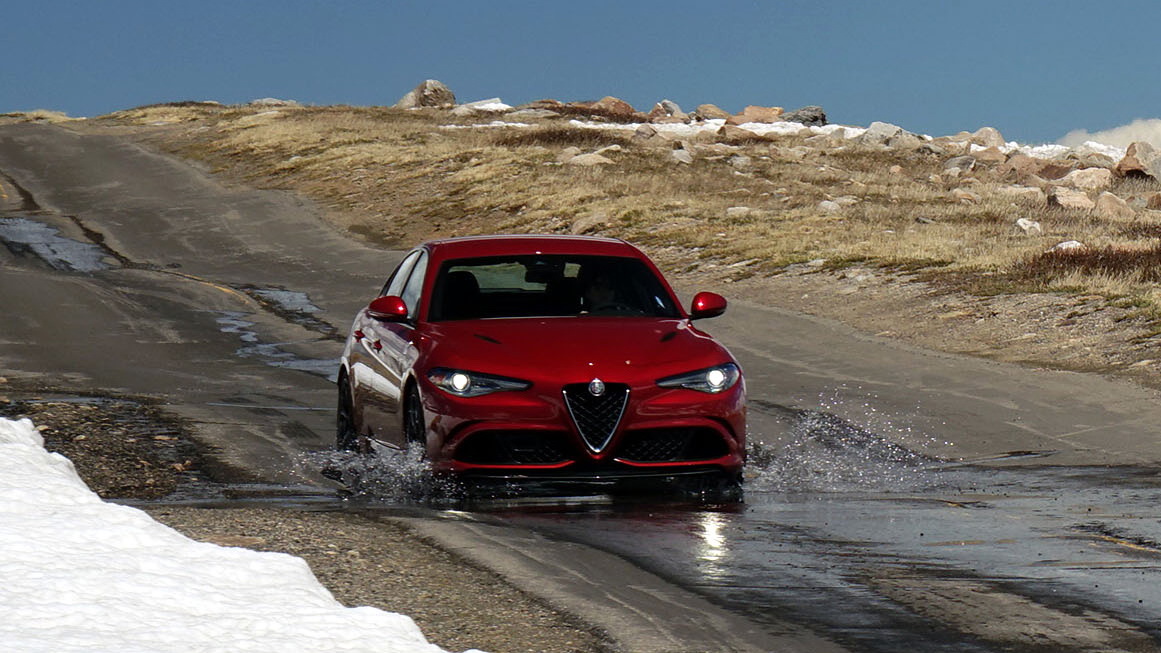 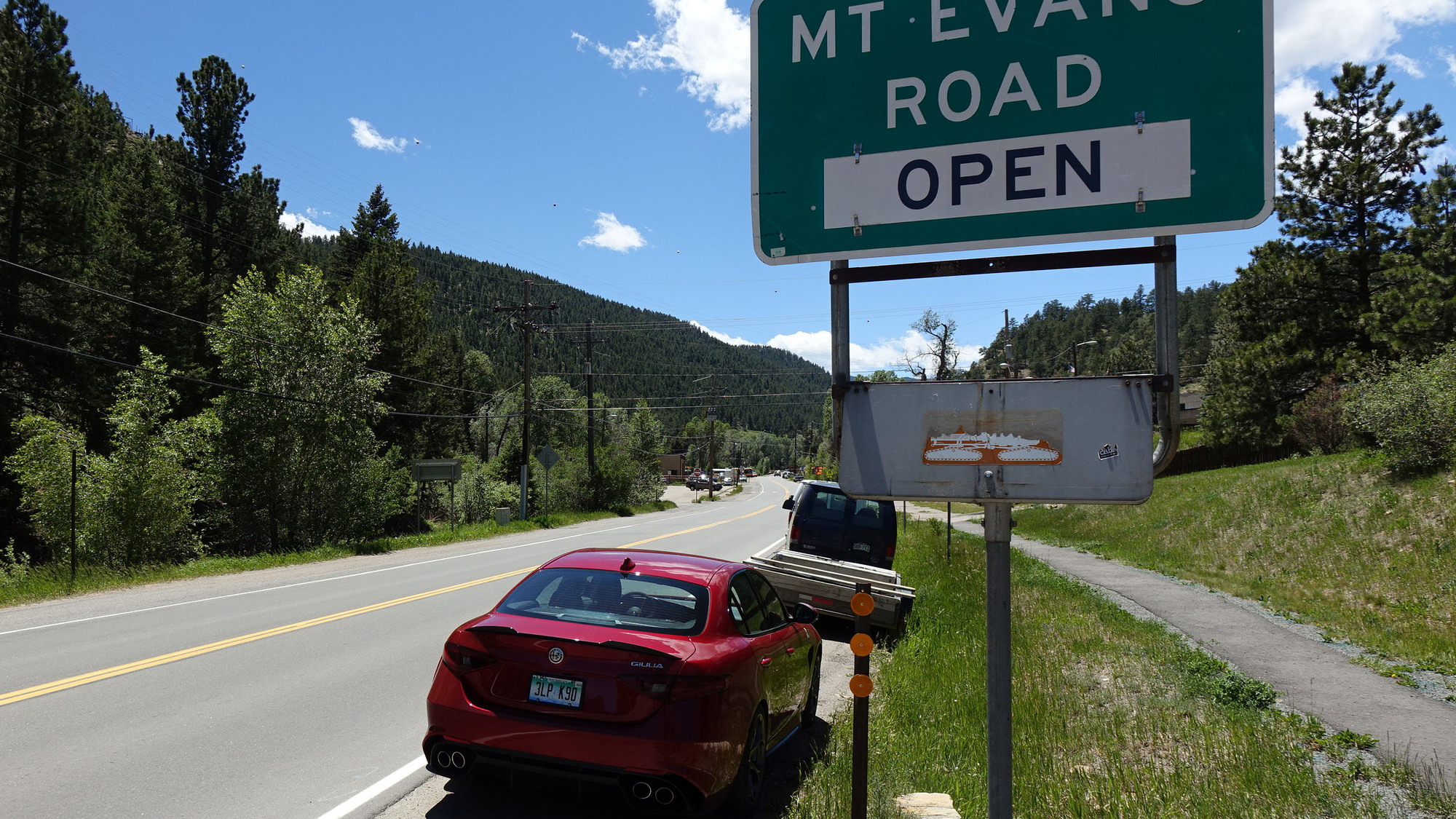 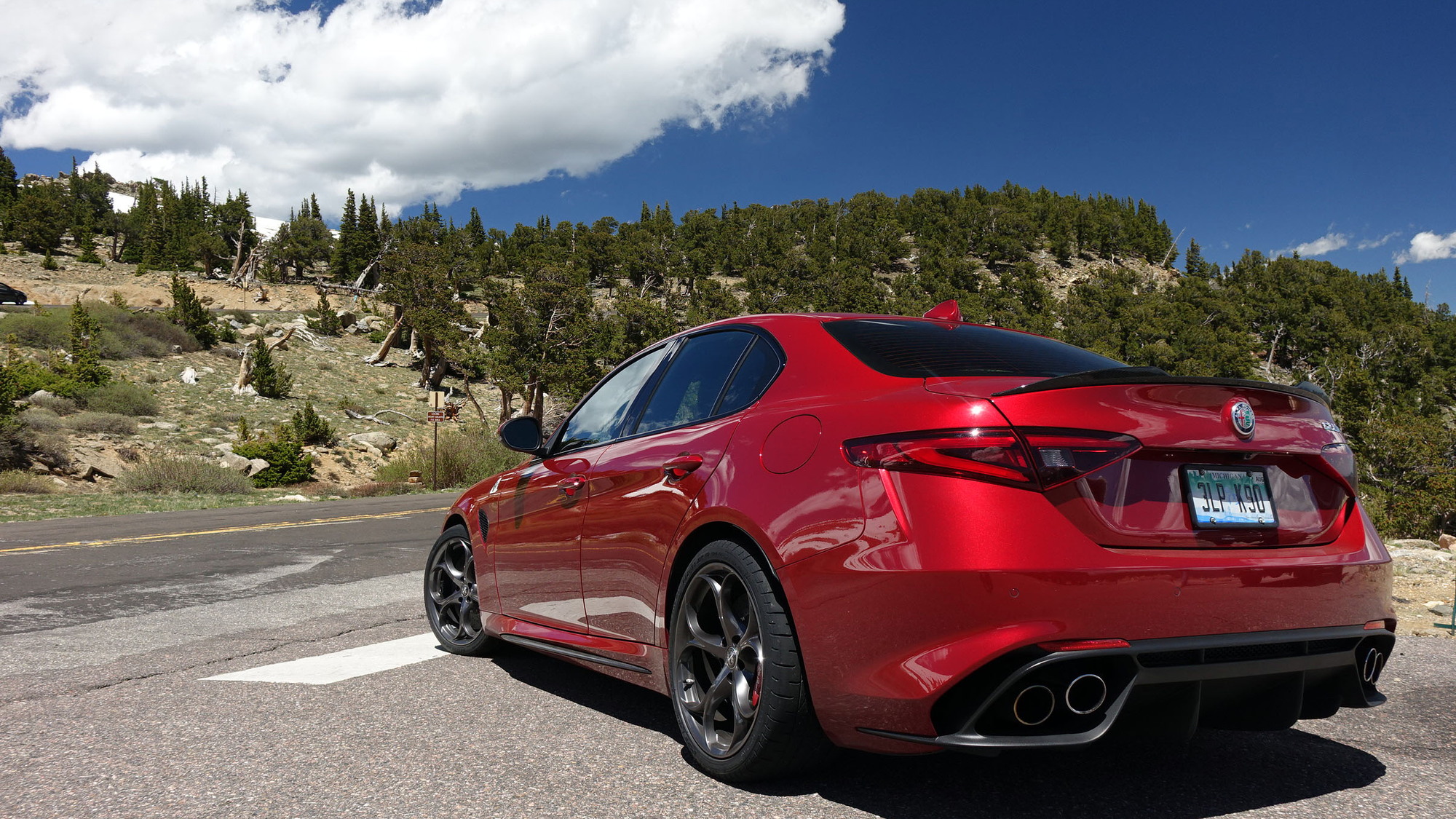 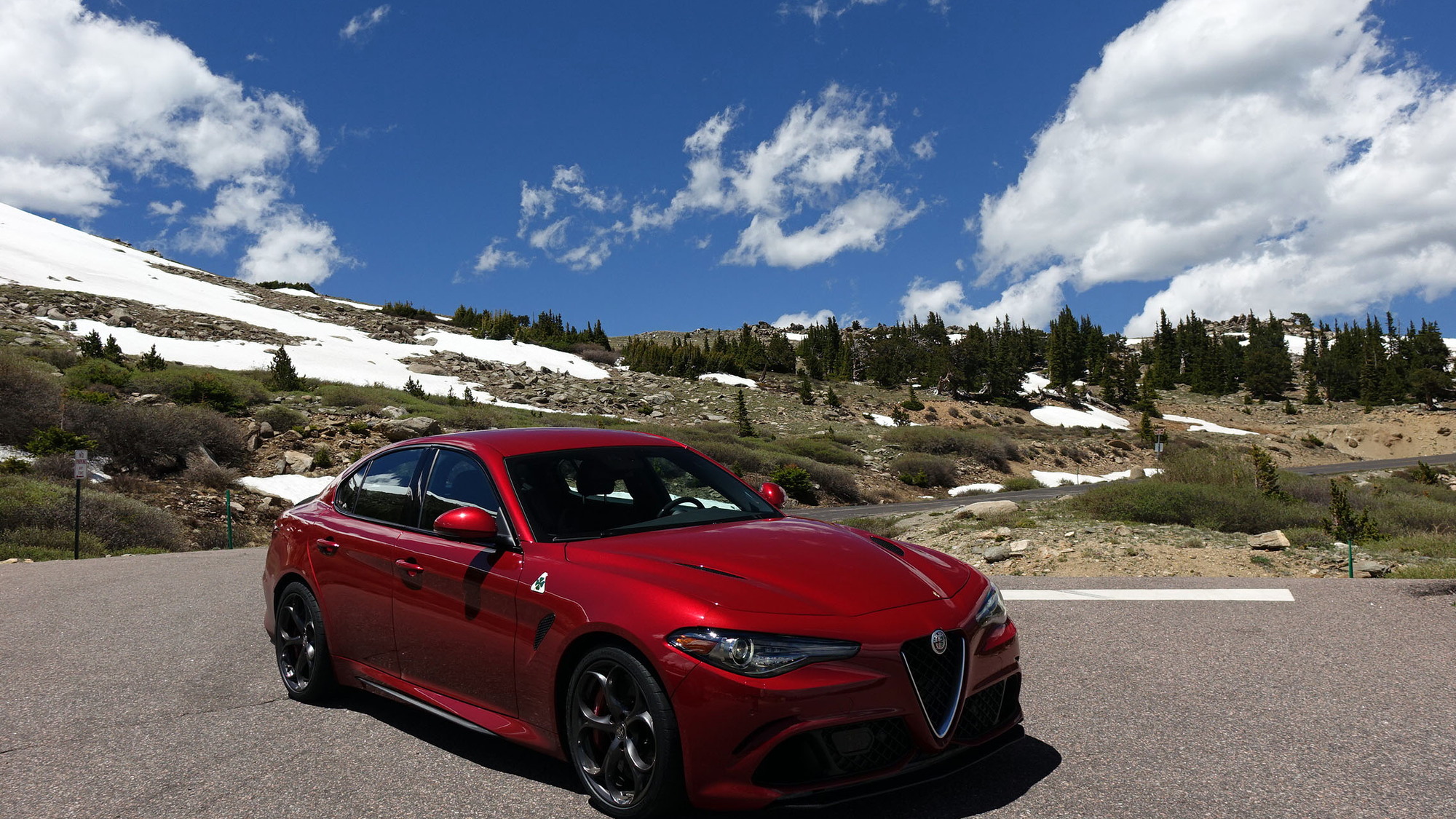 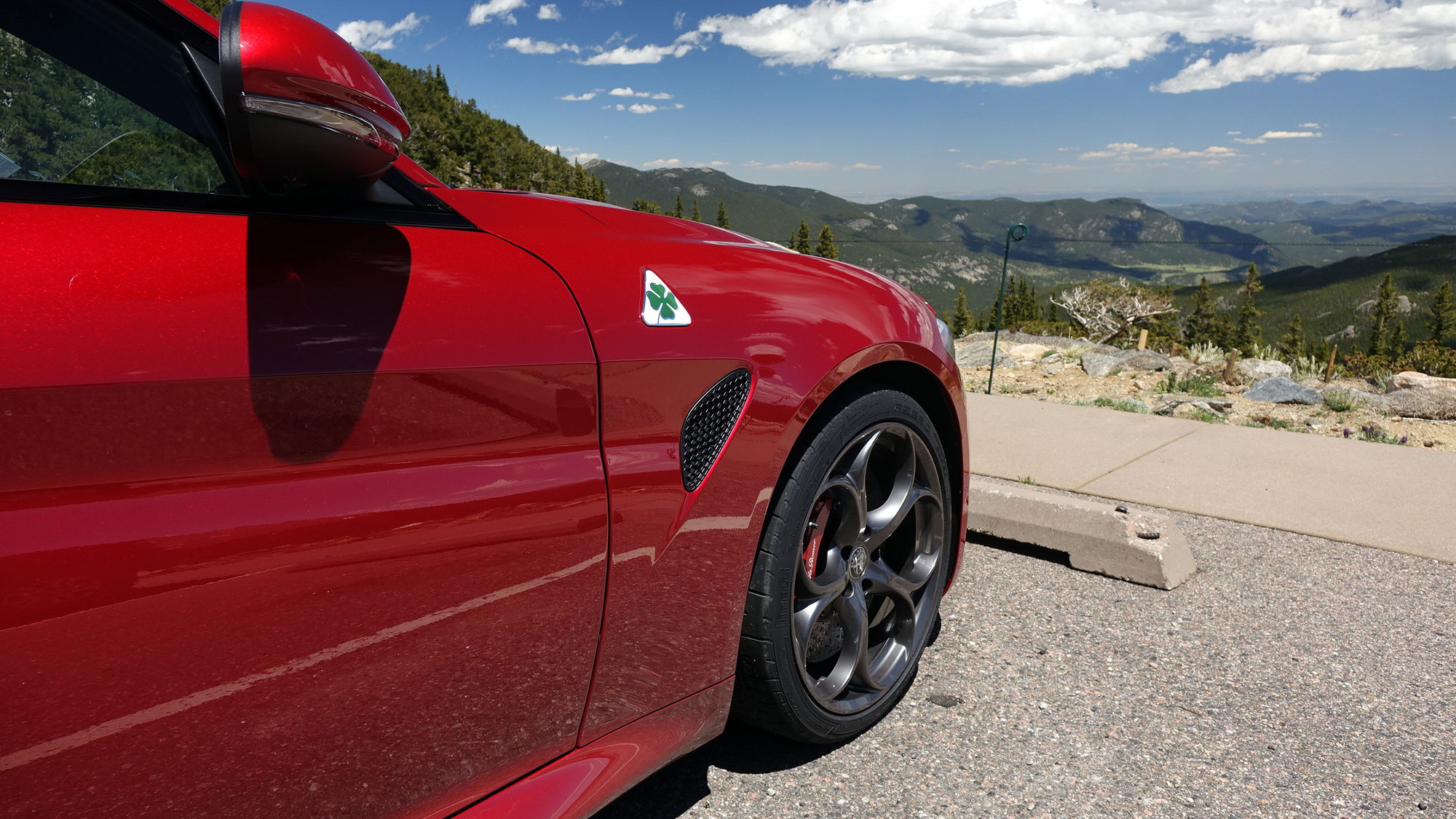 It's 9,000 feet from Denver to the summit of Mt. Evans, the highest point accessible by a paved road in North America.

That's 9,000 vertical feet. It's a heck of a climb, especially considering it only takes about an hour and a half to do by car. We set off in a 2017 Alfa Romeo Giulia Quadrifoglio in search of scenery, serenity, and clarity.

We came down from the mountain not only behind the wheel of what's probably the first Giulia to climb that high, but also with some deep thoughts on the brand's resurgence.

Alfa Romeo faces a similar uphill climb here in North America, although it's taken the brand more than 20 years to sail back to the United States from Italy with a car it hopes more than a few well-heeled, eccentric enthusiasts will buy.

The Giulia, a reprisal of the nameplate that saved the brand's fortunes in postwar Italy more than 70 years ago, is a five-seat, compact sedan designed to square off against heavyweights with loyal buyers like the Audi A4, BMW 3-Series, Cadillac ATS, and Mercedes-Benz C-Class. Alfa first launched the Giulia late last year initially as the Quadrifoglio, its hottest configuration. With 505 horsepower pumped out of a Ferrari-derived V-6 engine, the Quadrifoglio—that's Italian for four-leaf clover, a hallmark carried by the brand's racing cars for nearly a century—looks as good on paper as it does in person. This one's the flagship, but a 270-hp, turbo-4 Giulia is now in dealers, and its roughly $40,000 sticker puts it a reasonable $7,000 or so above the average new car transaction price.

And Alfa is following things up with the Stelvio, new SUV even more in line with American buyers' tastes due in showrooms later this year. In short: the 20-plus years since the last Alfa Romeo 164 sedan was unloaded here has given the Italians some time to figure things out.

Giulia Quadrifoglio on top of the world

Just days after the Mt. Evans Scenic Byway was opened for the season, we set off in a shiny red Giulia Quadrifoglio. Admittedly, it's not the best car for this difficult-to-maintain highway. With much of the road above tree line—an elevation so high that the air's too thin to support most life—road crews only provide skeleton maintenance during the summer. The road might be paved, but it's more with good intentions than smooth, autostrada-like blacktop.

The road was initially conceived to link many peaks of the Front Range of the Rockies together in the early days of the automobile, but numerous challenges with weather and terrain have left the road's original concept only half-executed for the last 85 years. You can drive up to the summit, but you'll have to drive back down the same tight, pucker-up switchbacks to get home.

These challenges aren't entirely unlike those faced by Alfa Romeo over its 100-plus year history. Initially a high-end builder of racing cars modified for street use, Alfa Romeo regrouped after World War II as a builder of premium, but accessible sports cars and sedans. Although never really a mainstream brand in North America, Alfa did best here with its two-seat Spider roadster—but that model became emblematic of the brand's struggles. The 1966 Spider wasn't really all that different than the last one sold here in limited numbers in 1994.

Today, there's more money behind Alfa Romeo than ever before, something you've probably noticed given how aggressively the brand is marketing its big league return after dabbling in low-volume sports cars.

For the most part, the Giulia feels like the product of a brand with its priorities right. Although not without its flaws, the Giulia checks all the right boxes. It's eye-catching and elegant, even all dolled up with carbon fiber trim like our tester. Inside, it delivers excellent space and comfort with a spartan yet attractive dashboard. Sure, its navigation system is fiddly, its door armrests are too short, and its steering wheel-mounted paddle shifters get in the way of its turn signal levers. In a BMW, we'd call these flaws. In an Alfa Romeo, for some reason they feel more like quirks.

Of course, the Giulia Quadrifoglio drives superbly. We've already told you that. It's also been temperamental in our hands, although our tester in Colorado climbed and descended with no issues.

As entertaining as the Mt. Evans road looks on a map, it's slow going. If you're not stuck behind tourists dawdling along in a rented Corolla or inching over permafrost heaves, you're puckering up since there are no guardrails or even trees to stop you from taking an unimaginably far plunge off the road. What we can report is that, even on its big 20-inch alloy wheels wrapped in Pirelli P-Zero rubber, the Giulia Quad took bumps in stride and left us feeling highly confident in its communicative steering. It wasn't until we descended back down into Denver on Interstate 70 that we really got to test out its ferocious, barking 2.9-liter twin-turbo V-6, an engine that's as fun to run through the revs as any we've ever driven.

If we stretch our hill climb analogy slightly too far, it's safe to say that Alfa Romeo is still in the foothills as it attempts to grab hold of the American market. But if the hits keep on coming, it's safe to say that buyers will, too. In the increasingly homogenized new car market, the Giulia Quadrifoglio is a solid reminder that driving can still be fun.