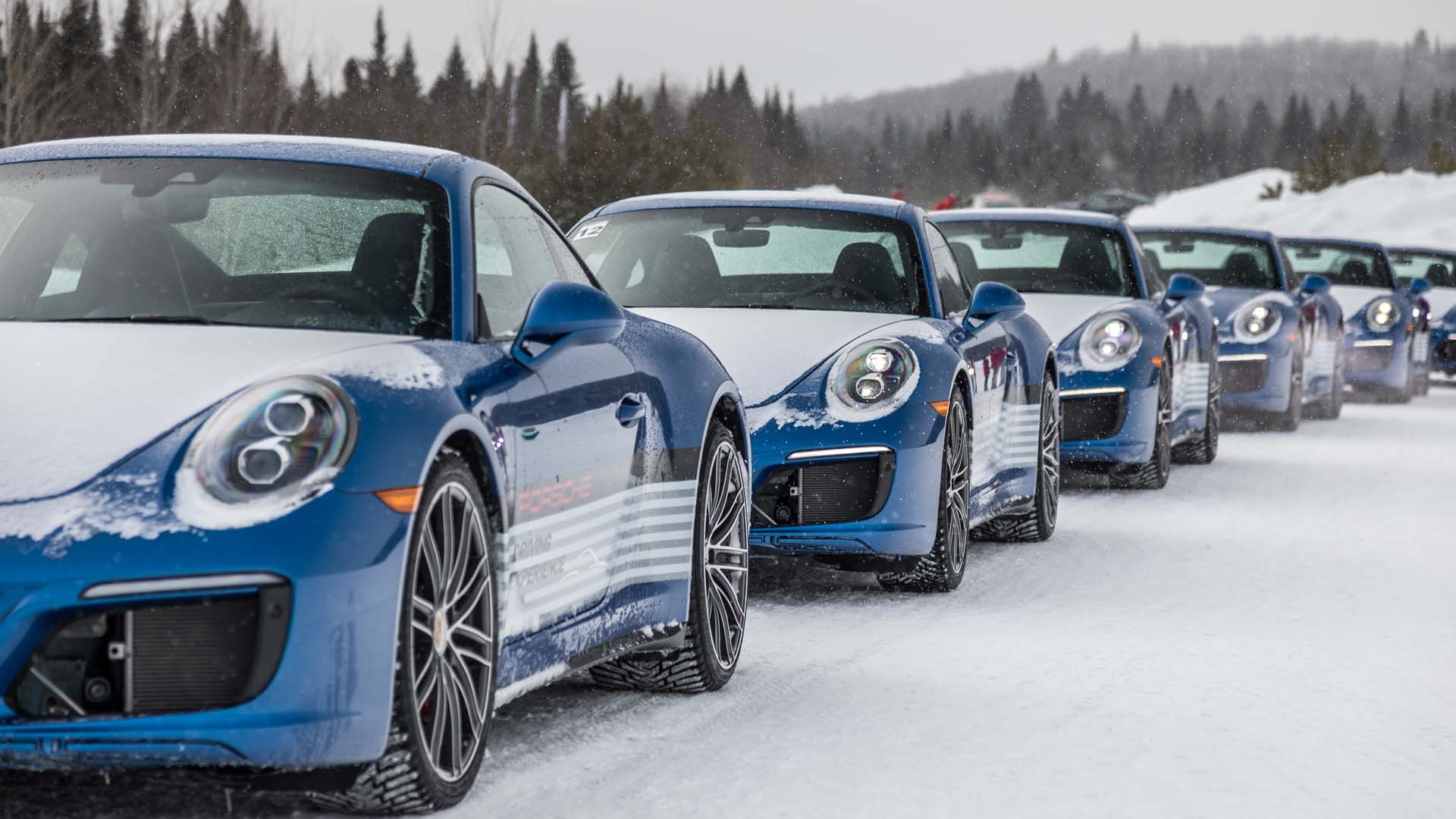 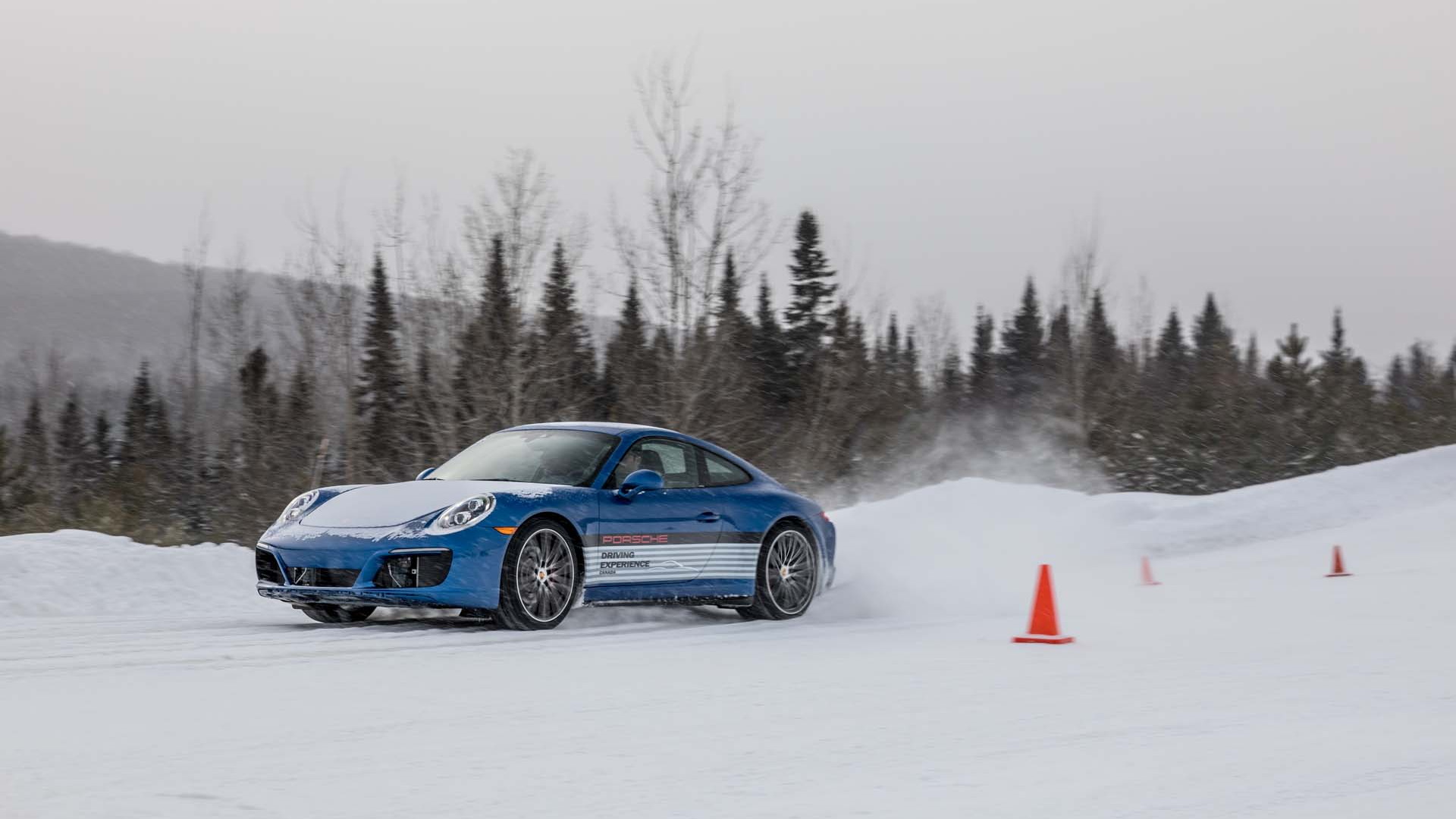 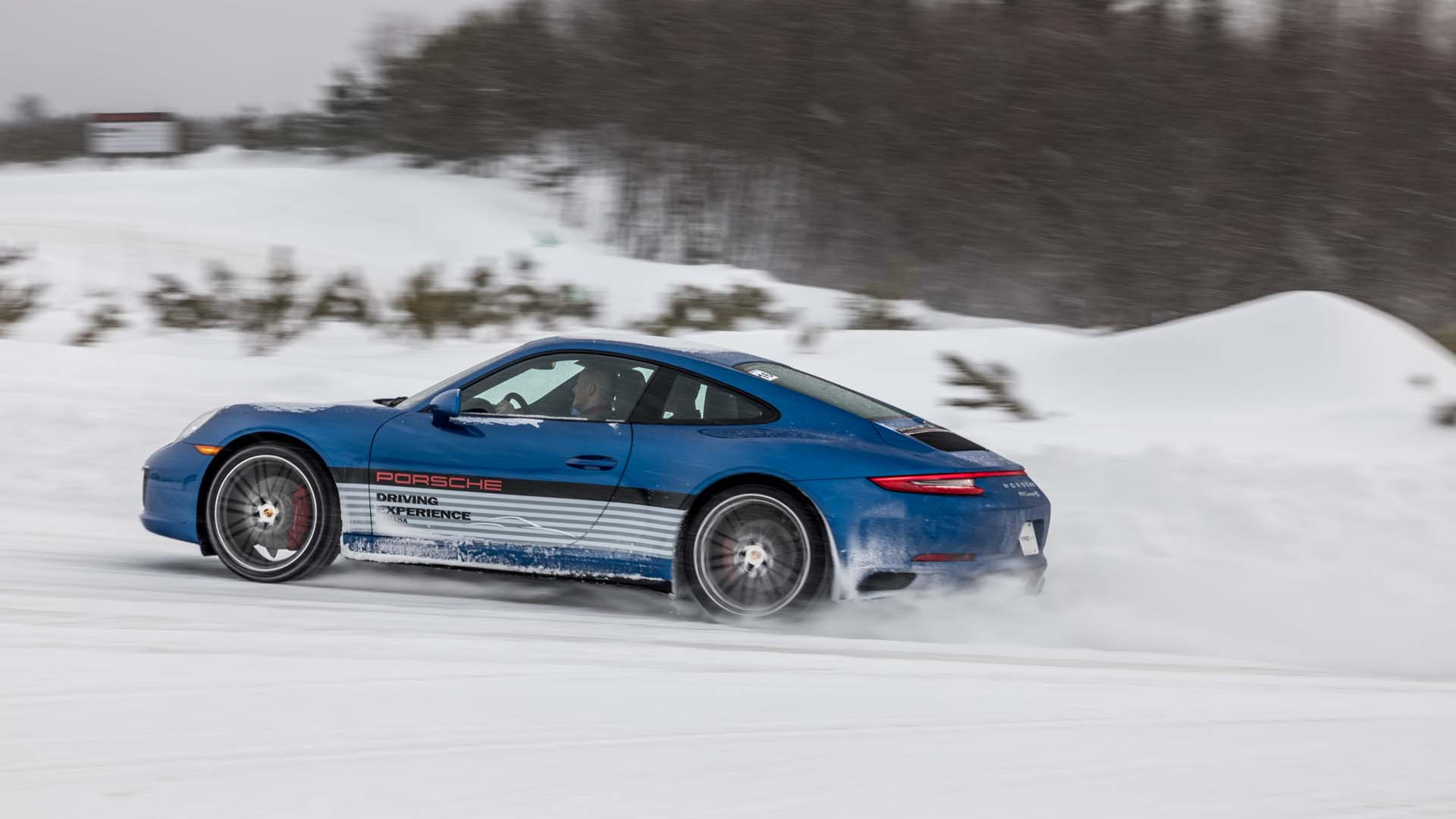 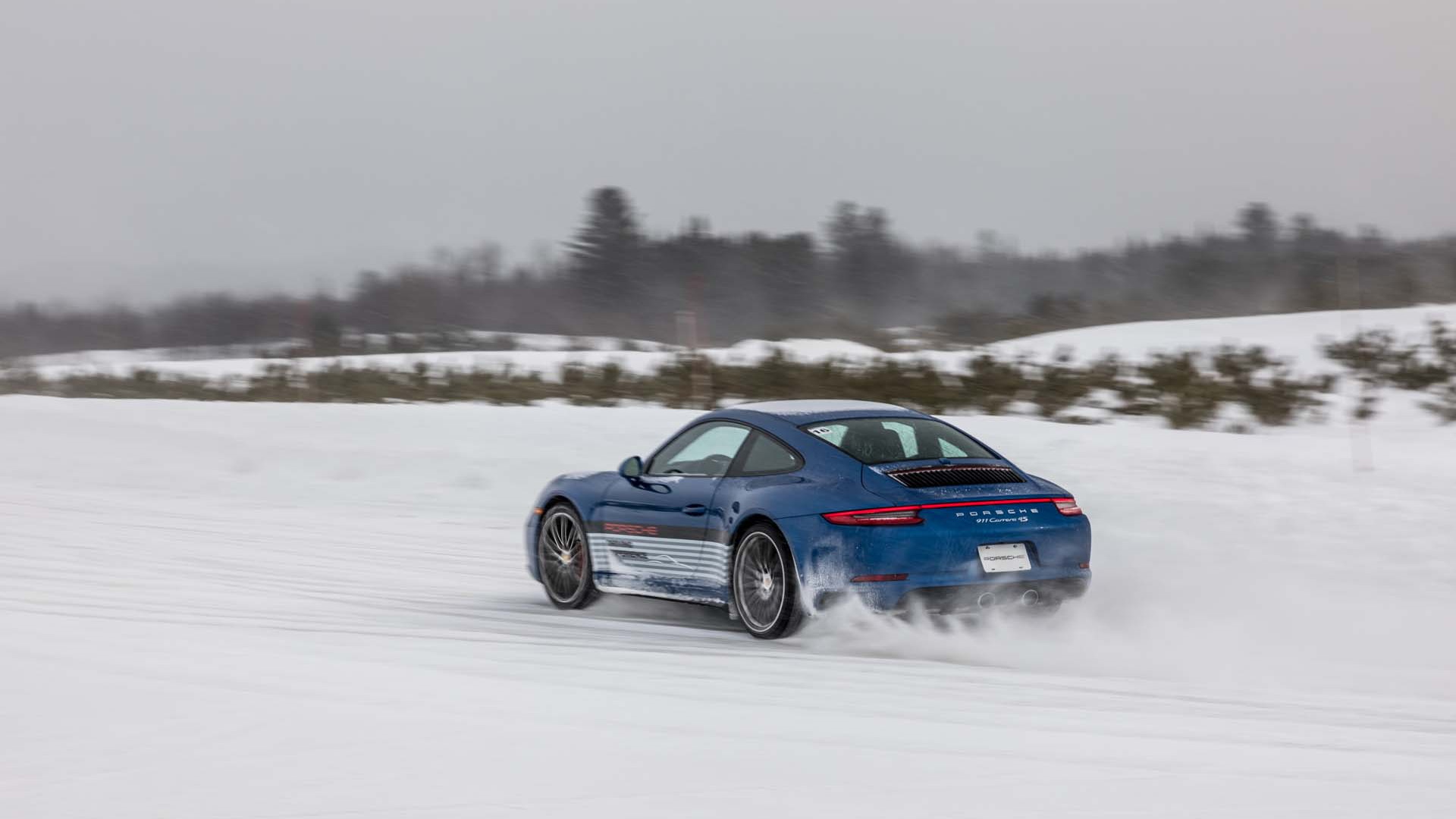 Drivers dread the moment they effectively "run out of talent."

That sinking feeling in the bottom of your stomach when a turn goes pear-shaped and the car goes sideways isn't exactly thrilling. For some, talent runs out on the day's last lap, when tires are hot and tensions are hotter. For others, it could be the first lap, when tires are cold and nerves are numb.

If it's below freezing outside, it could be a combination of cold tires and hot tempers.

Professional driver and Porsche instructor Lorne Banks knows the feeling when talent has left and panic has arrived fairly well. The former motorcycle hotshoe (or is it boot?) is a convert to four-wheeled racing and distills his instruction on a cold Canadian morning.

"If at first it doesn't work, then keep doing the same thing?" he asks from his perch on a frozen race course outside Montreal, which Porsche uses as its winter playground.

Improving one's driving talent is the point of Porsche's Camp4, a worldwide adventure for well-heeled owners looking to increase their skills without decreasing the value of their cars with broken bumpers, mangled hoods, or frayed nerves.

The Canadian winter driving program is a relatively new stop for Porsche on its Camp4 circuit, which started in the 1960s. Drivers and instructors wind their way through slalom runs, drifting figure-eight courses, downhill sweepers, and short tracks for rally flicks. For four or five days, the crash course on staying dent-free is meant to showcase the dynamics of Porsche's sports cars on the frozen tundra. Starting at $4,000 and running all the way up to $7,500 for a five-day mind-boggling bender, Camp4 is an adventure, but also serves as a notice: talent only goes so far, and repetition is the only way to fill in the gaps.

It's physics, after all

Banks is meticulous in his approach to instructing drivers. After a brief session in seating position and car prep, Banks' advice is simple to novice drivers: Drivetrain and engine layout are critical knowledge on paper, but there's no amount of talking that's better than seat time.

For example, our first test is a rally flick behind the wheel of a 2017 Porsche 911 Carrera 4S, an exercise meant to get Porsche's famous pendulum rear end to swing around with predictability. Banks' instruction and theory may have well been in Klingon.

The lesson to be learned on the snowy short track: Porsche's all-wheel-drive system won't save much if the front wheels aren't straight. Steer into the skid and I'm stuffed; straighten up the wheels and the fronts will claw the back end in line with where the nose is pointed.

It's counter-intuitive for me because I'm used to sawing at the wheel when the back end is flailing. Slower hands help in this all-wheel-drive test, and the 911's front tires greatly benefit from a driver's mental reset—even when carrying more rotational inertia in the rear-engined Porsche than you get in the teacup ride at Disneyland.

Shod with the widest studded tires that Nokian makes, each 911 makes Italian ice out of the frozen Mecaglisse landscape.

Consider the following. I can touch my elbow with my eyes closed, and I could be able to control a rear-engined drift with enough opposite lock, throttle, and eyes pointed directly through the turn. So how can I do the former in my sleep but couldn't do the latter consistently under threat of death?

"When I was in college, I found the cheapest place I could live and did stuff like this every weekend," says Porsche spokesman and sneaky-great driver Frank Weismann.

Spin after spin and loop after loop, a sense memory develops through the drift and the rear-drive Porsche 911's wheel becomes more responsive and its gas pedal becomes ever reactive. The car never changed, but the feeling on each lap becomes ever-more refined.

"It's not in your head," a junior instructor says. "It's in your touch."

There are two tricks to planing down a remarkably steep learning curve in a 911. The first is to use second gear to tame the 3.0-liter turbo-6's 368 pound-foot wall of immediate torque that sends the rear wheels into a flurry. The other is a contradiction, but well-received for newbies in a safe space: turn off traction control. Not because I'm better or smarter than the computers, but rather that it actuates senses that will come in handy later on.

Car control is knowing when to lose it, after all.

Each car has physical limitations that it can't overcome. Whether it's engine placement, drivetrain layout, or rubber meeting the road, some things can't be solved—only somewhat mitigated.

An icy slalom course with a 2017 Porsche 718 Cayman is a good example.

The 911's signature layout has been dissected, inspected, and respected by thousands of drivers including yours truly, but it hasn't entirely overcome the laws of physics. Placing a potent 2.5-liter turbo-4 midships in a squat sports car goes a long way toward rectifying the 911's inherent physical limitations. However, that more balanced layout doesn't help modestly talented drivers much after hours spent behind the wheel of the famously wriggling 911.

Put the 718 Cayman through a frozen slalom course and see what I mean.

Even though the 718 is considered to be a lesser model among Porsches (it's not), its rivals are few. With the engine's weight behind the driver, but not beyond the rear axle, the Cayman responds best with an eager attitude to send its tail right up its nose.

"Wait for the back end to come around then nail it," Banks barks over the radio.

A matted accelerator and polished ice underneath tires may sound like a strange combination, but it works. The 718's chassis is so rigid that it's hard to tell when the car settles into a neutral stance on ice, but it hardly matters. Once it's pointed in the right direction, it's almost always ready the driver's commands, so don't plan on waiting long.

The combination of throttle, fast hands, shifting weight, and Canadian sun buffing the tortured ice overloads my brain. Correcting oversteer often leads to understeer, which is compounded by snap oversteer when I'm out of ideas and off the throttle too soon. A dab of brakes to rotate the car can help when entry speed picks up.

"Do I need faster hands when entry speed picks up?" I ask.

"That. And more talent helps, too," he replies.