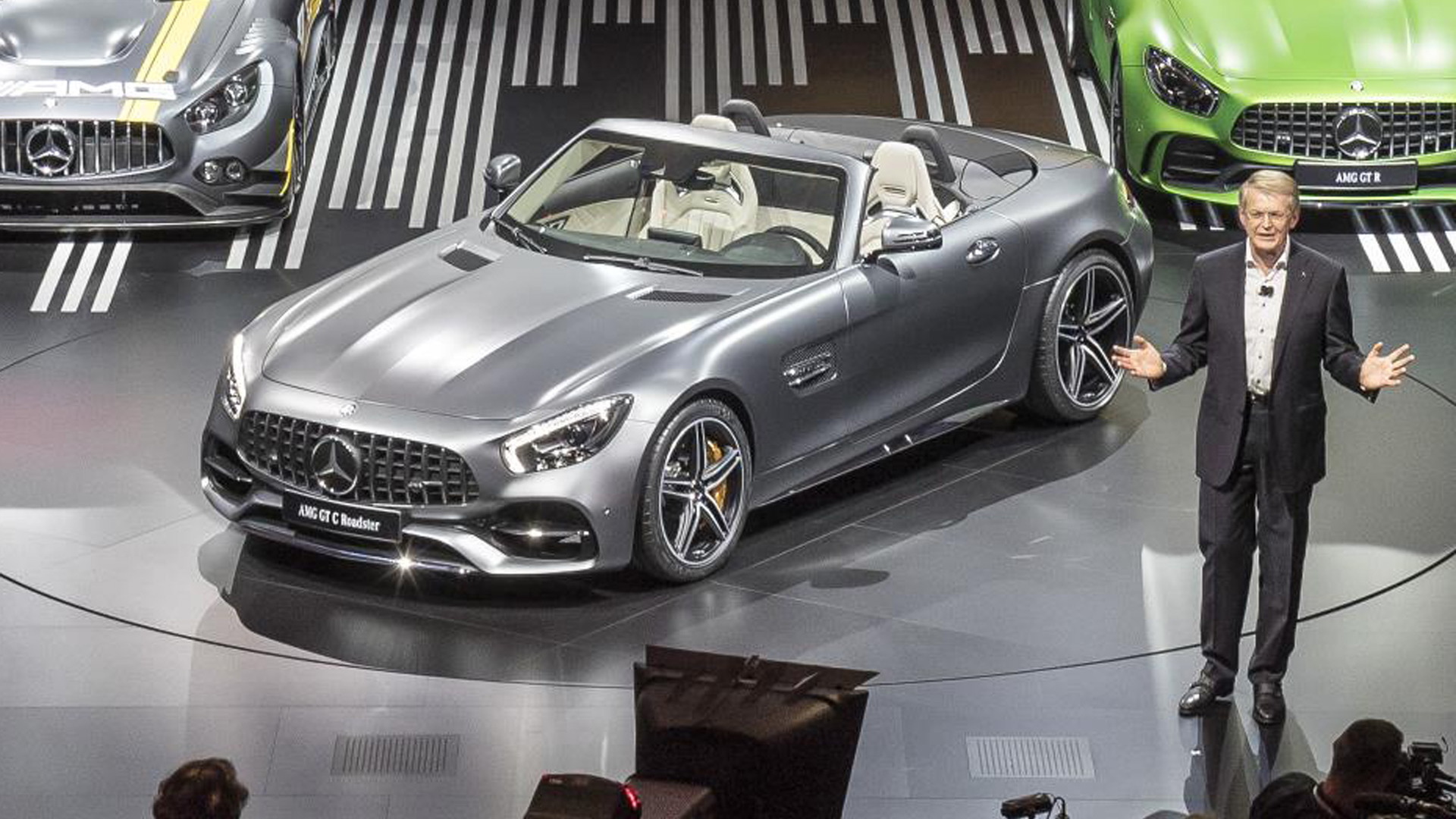 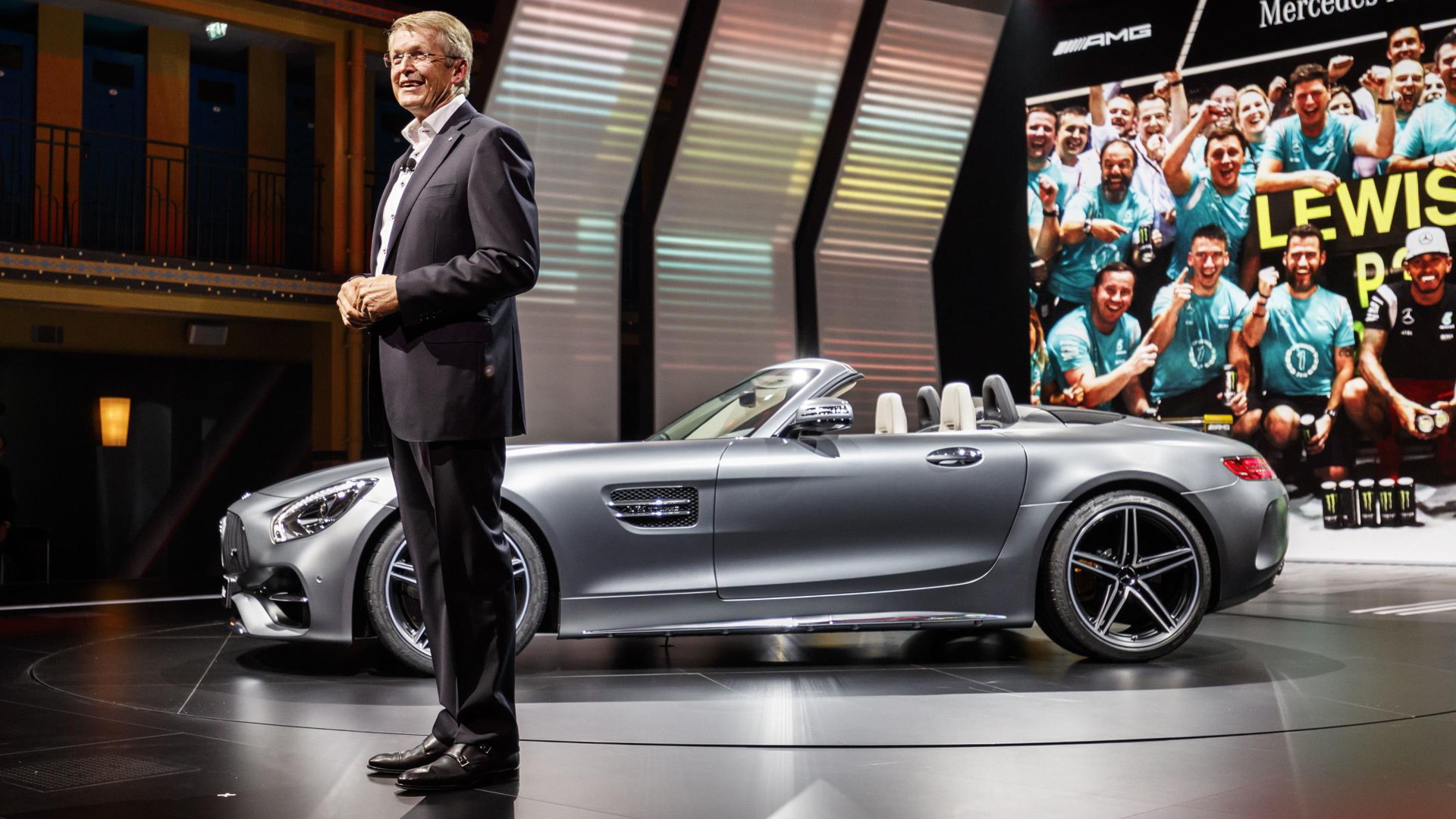 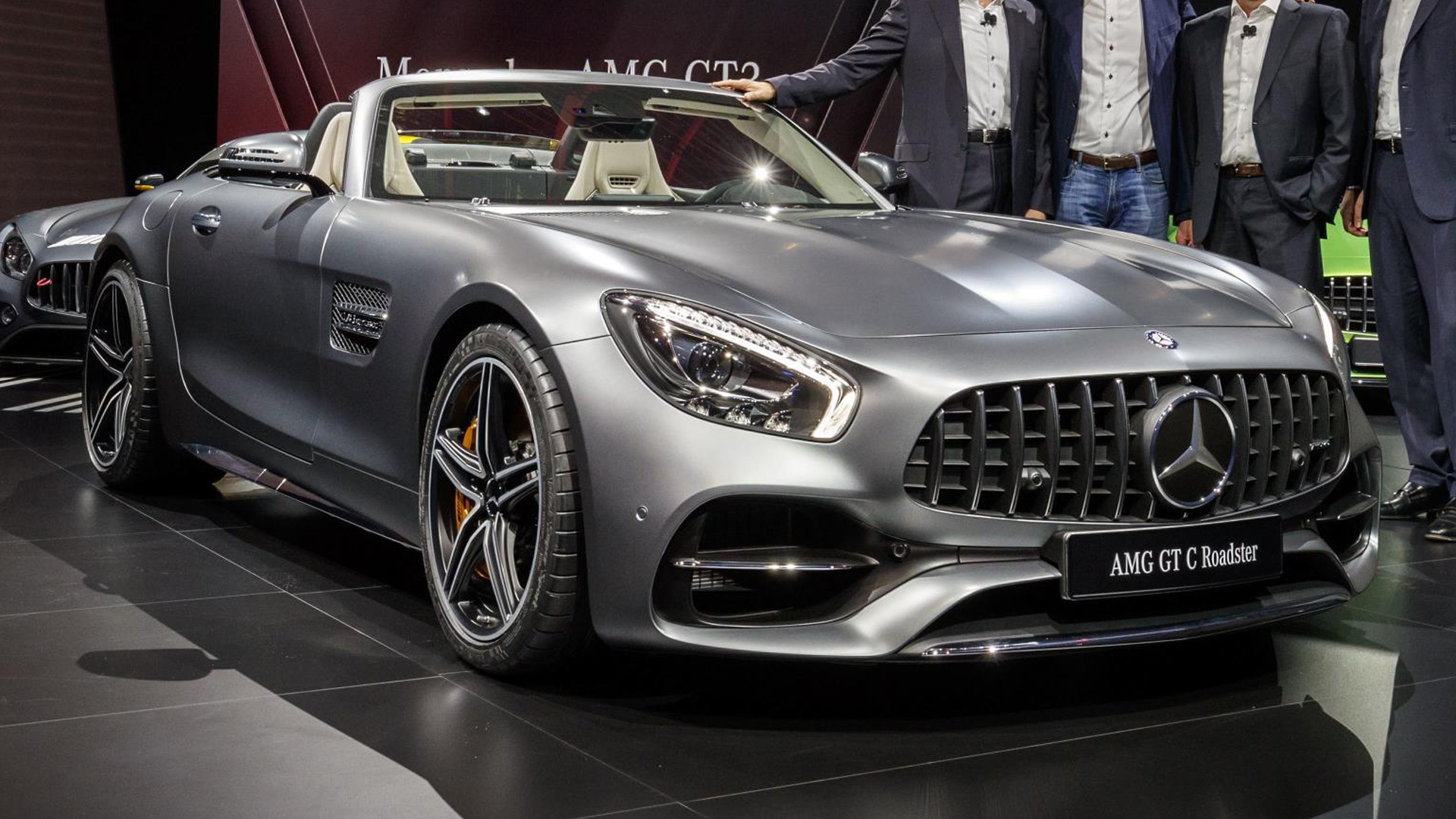 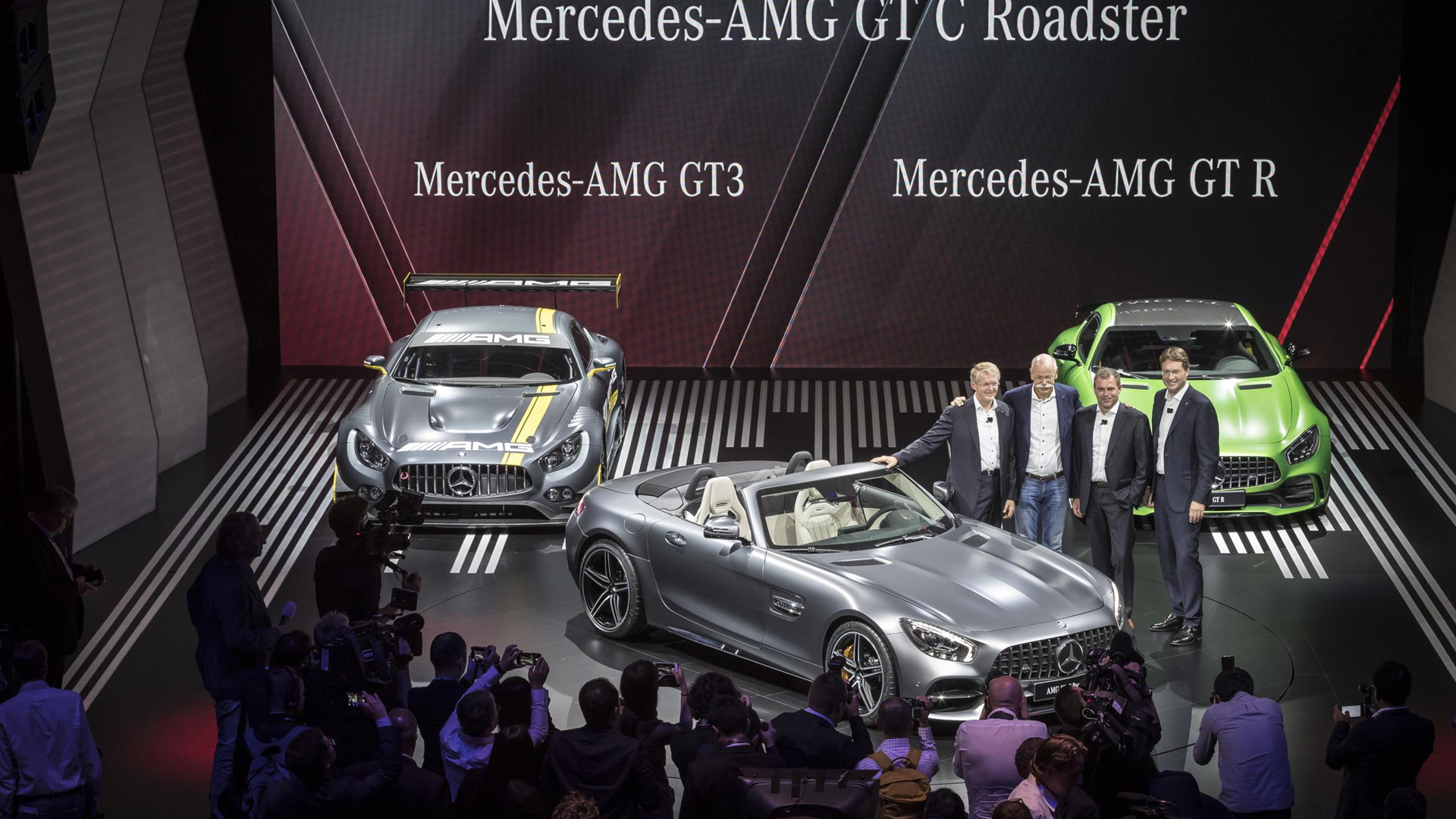 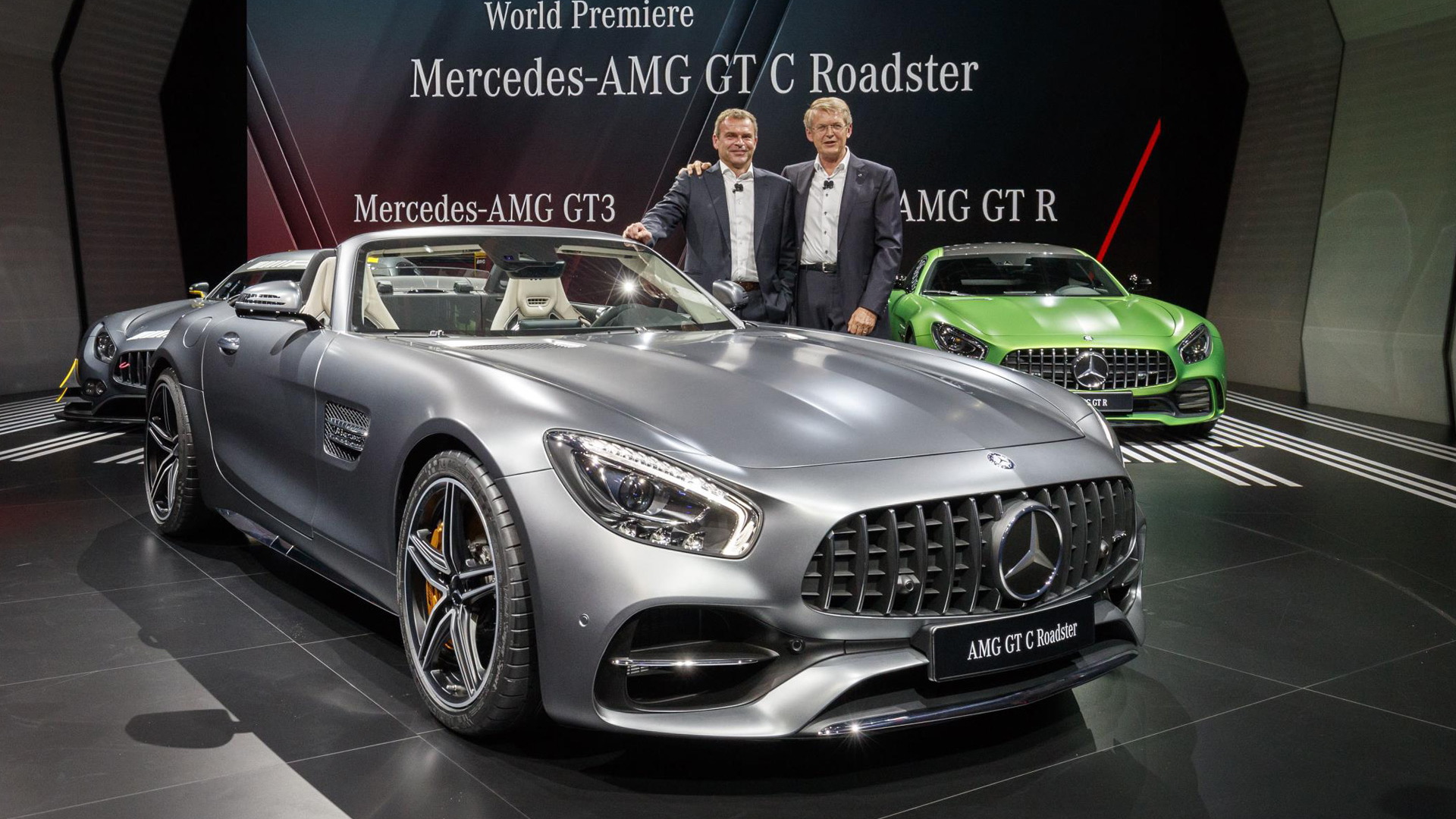 It's been rumored, suggested, hinted, even teased—now, the Mercedes-AMG GT roadster is reality. (Insert your own "topless" buff-book pun here.)

The roadster arrived at this week's Paris auto show wearing two different outfits, as both the AMG GT and the GT C Roadster. And now we have photos of the shapely new droptop in the flesh.

Both cars draw on the stunning AMG GT two-door that's been ripping around since the 2016 model year, and on the fierce GT R edition shown earlier this summer. Both Roadsters have a fabric soft top that can open in about 11 seconds, at speeds of up to 31 mph. The top's trimmed in beige, red, or black, and has a lighter-weight frame backed up by an aluminum crossmember and rollover bars.

But beige isn't what you're here for. It's specs, right? Right.

When it lands next year in American showrooms, the AMG GT Roadster will share the 4.0-liter twin-turbo V-8 and 469-hp output with the base AMG GT. Peak torque of 465 lb-ft arrives at 1,700 rpm and hangs around until 5,000 rpm. A 7-speed dual-clutch transmission sends power to the rear wheels.

Standard equipment on the GT Roadster includes a sport-tuned suspension, a mechanical locking rear differential, and 19-inch wheels with 255/35-R treads in front, 295/35-Rs in back. A 4-mode drive selector with Comfort, Sport, Sport+, and Individual modes is included, and a speed-sensitive rear spoiler tucks itself in and out according to drive mode and car speed.

Power front seats, a rearview camera, and the Comand infotainment system all are standard, too.

Options include Burmester sound, AMG Performance sport seats, seat ventilation, and the Airscarf neck-ventilation system (the first time those three elements have been combined in a sport-oriented seat, Mercedes says).

The differences between the standard Roadster and the GT C Roadster are subtle as a sledgehammer.

The GT C draws on the GT R for much of its running gear. Peak output from its version of the 4.0-liter twin-turbo V-8 rises to 550 hp and 502 lb-ft of torque. It shares the GT-R's active rear-axle steering and the electronic limited-slip differential, and like the GT R, has a beefed-up dual-clutch transmission with new programming and a manual-shift mode.

Also on loan: the wider rear fenders that tuck wider tires and wheels in the bodywork, and a variable exhaust system with not so quiet and not at all quiet modes (the exhaust system is an option on the base Roadster).

Standard equipment on the GT C Roadster includes an adaptive sport suspension, staggered 19- and 20-inch wheels (265/35-R treads in front, 305/30-Rs in back) and a 5-mode drive selector with Comfort, Sport, Sport+, Individual, and Race modes. A lighter-weight lithium-ion battery is included, and the GT C Roadster gets Nappa leather in the cabin and an AMG Performance steering wheel with Nappa trim.

The AMG GT R: a refresher

At the top of this heap of horsepower is the GT R, which made its public debut earlier this year at the Goodwood Festival of Speed.

The GT R gets the ultimate version of the twin-turbo V-8 noted above, and a slew of visual and suspension tweaks, starting with the heritage grille and wider rear-end body work.

Its chassis is heavily modified with aluminum and carbon-fiber pieces that boost stiffness while cutting weight to a Euro-spec 3,428 pounds. The GT R is set up to make the most of its Michelin Pilot Sport Cup 2 tires and the rear-wheel-steering system, which points the rear wheels in the opposite direction of the fronts at speeds of up to 62 mph.

Carbon-ceramic brakes are available on the GT-R, but the adaptive aero kit and fixed rear wing are standard, as are a 9-mode traction-control system, sport seats and Nappa leather trim.

There’s no mistaking the GT R as anything but the most extreme version of AMG’s GT, at least until a Black Series arrives.

On sale next year