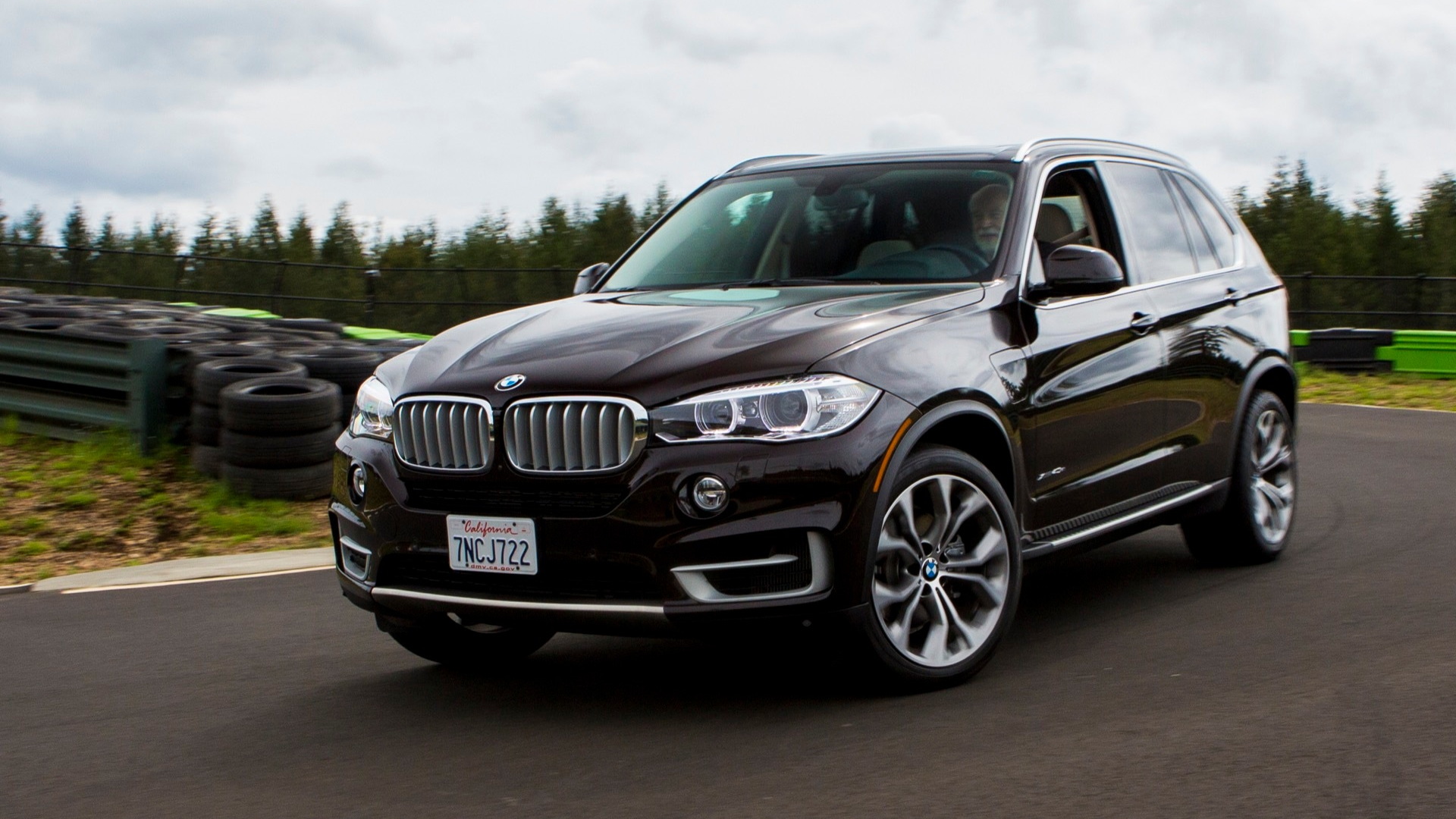 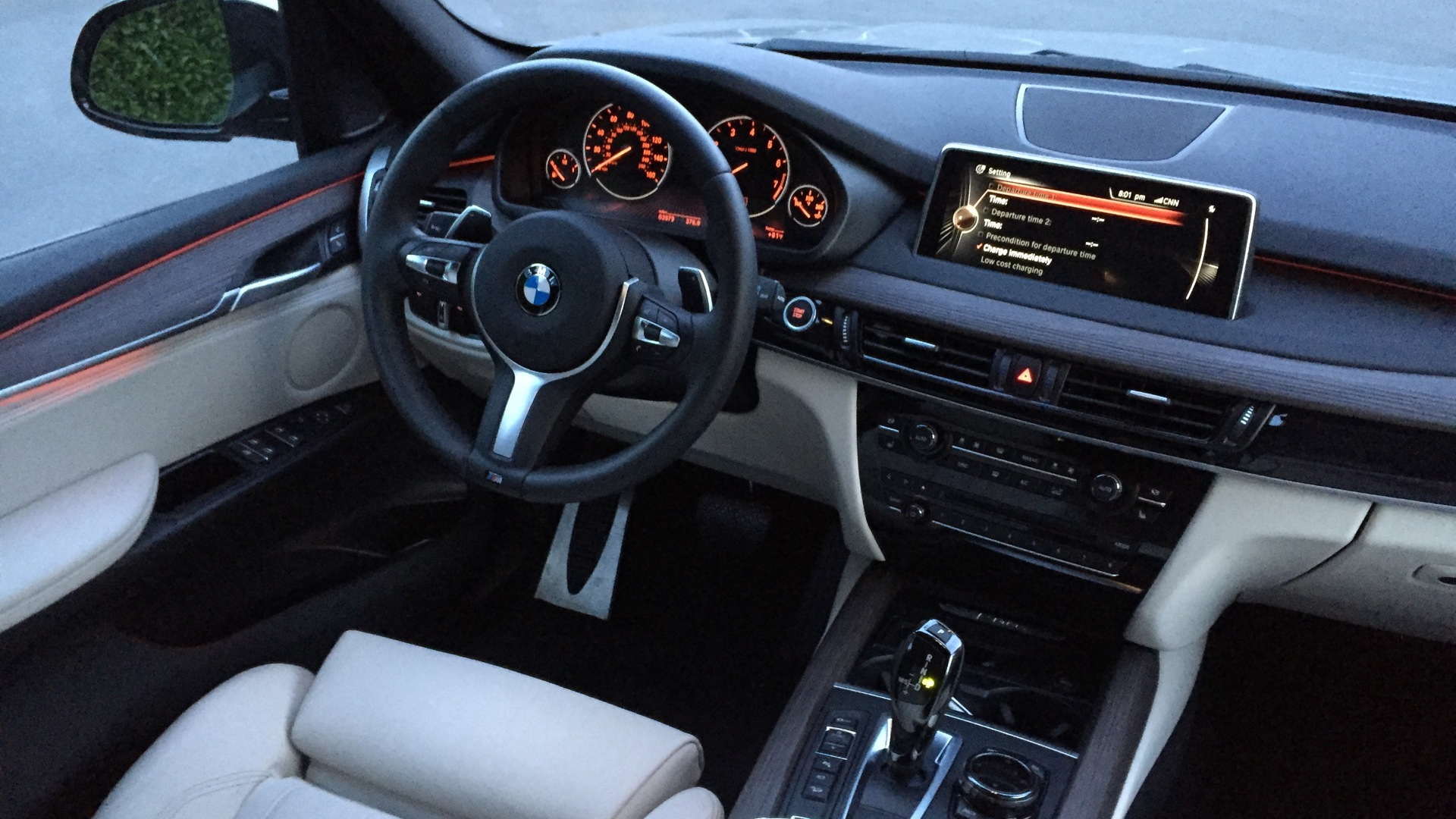 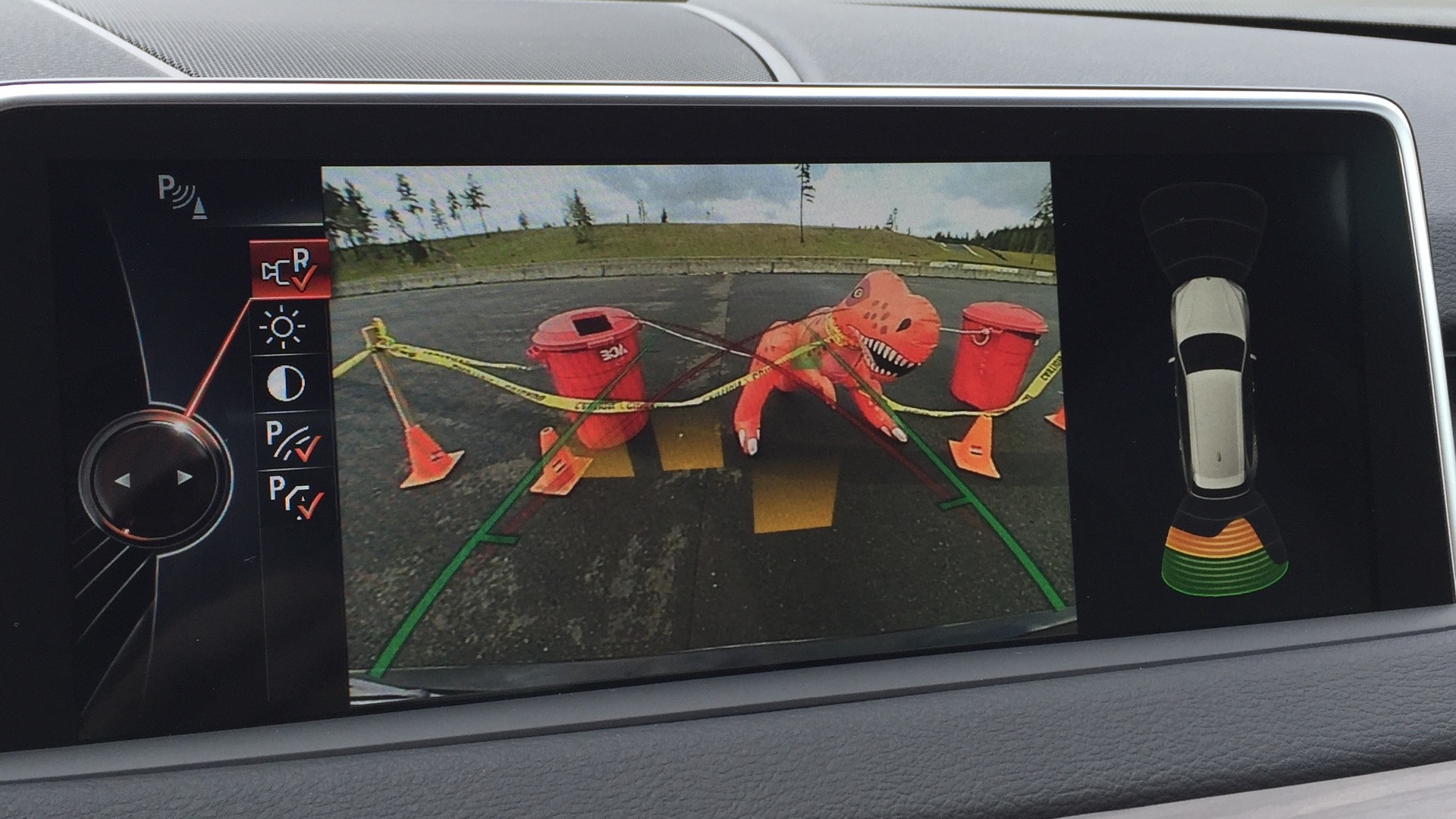 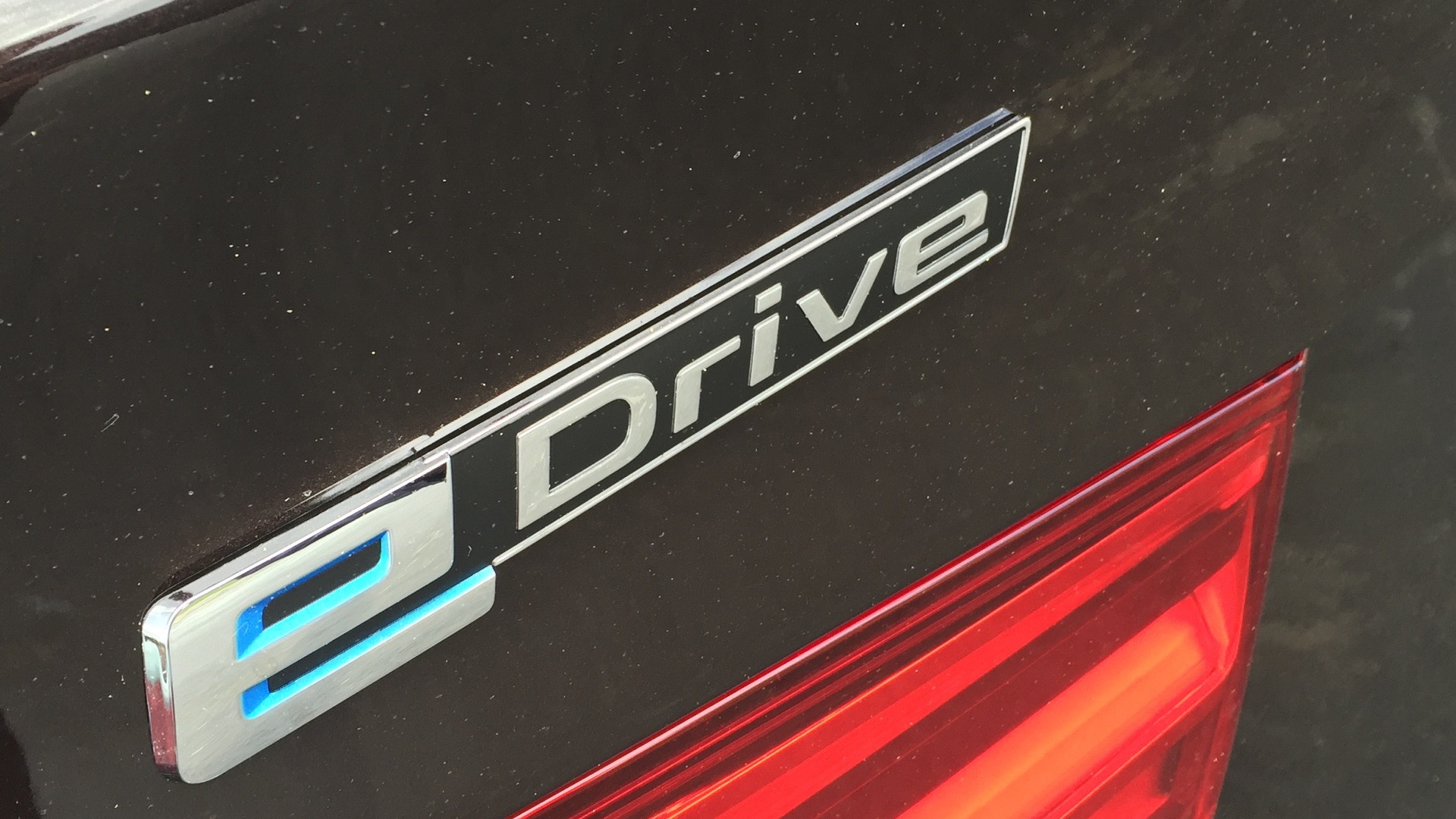 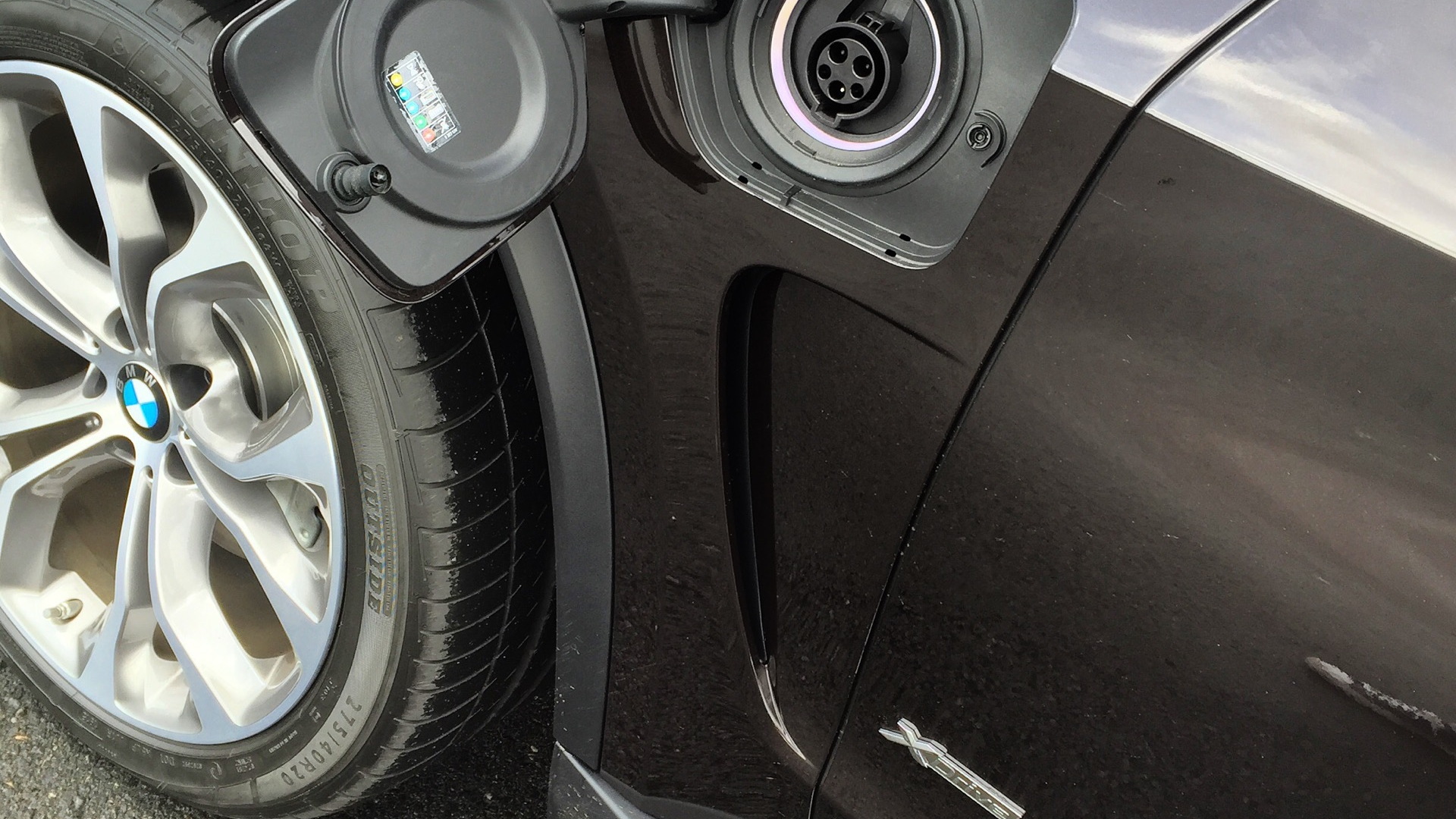 The numbers add up to an alluring (and image-greening) idea: that you could charge up each night and have enough of a charge to make your (short) commute without the gasoline engine ever starting—and free of direct tailpipe emissions. Or if your daily driving distance is, as most commuters, quite a bit more than 14 miles round trip, you could potentially plug in at work or while shopping, and do most of your daily-driving tasks on purely via a near-silent EV mode.

But if you’re too focused on the numbers, we’d venture to say that this plug-in X5 isn’t the one for you.

By the time we’d finished a full week with the xDrive40e, we couldn’t shake the impression, based on the interface and based on the way the X5 defaults, that BMW engineers weren’t actually planning for you to *use* that plug-in capability daily.

Out with the mechatronic masterpiece, in with the modular

Before getting into why, here’s a brief outline of what’s under the hood. There’s a 2.0-liter inline-4, essentially the same engine that’s used throughout the BMW lineup, making the same 240 horsepower and 260 pound-feet of torque. And plenty of familiar components, like BMW’s xDrive all-wheel drive system, using an electronic multi-plate clutch system to vary the torque that gets sent to the front or rear wheels.

What’s in between doesn’t at all involve the Two-Mode Active Transmission that was installed in the former X6 ActiveHybrid—a powertrain that BMW, modest as they are, still describes as a “mechatronic masterpiece.”

That masterpiece has been swept aside in favor of something simpler and lighter: an eight-speed plug-in hybrid automatic transmission from supplier ZF. This transmission, which packages a strong (111-hp) electric motor inside the transmission housing, replacing the torque converter completely, was designed as a plug-and-play [pardon] solution for automakers that wouldn’t take up much more space than an existing eight-speed automatic.

The X5 xDrive40e is the first model in the world to offer this transmission, part of a modular hybrid kit from ZF that’s to be used in mild, full, and plug-in hybrid models, perhaps from a range of brands and automakers.

The fundamentals are all clearly here, with a 9.2-kwh lithium ion battery pack that can be charged to full in less than two hours with Level 2 (240V) charging or around 7 hours on a standard 120V household plug.

Now as for that impression that we weren’t meant to tap into those all-electric capabilities, look at the interface; there’s not a lot of encouragement in it. Every time you start the X5 plug-in—even if there’s a full charge—it defaults to the AUTO eDrive setting, which runs the vehicle in a smart hybrid mode, using the electric charge generously when EV operation is deemed the most efficient, then turning the gasoline engine on at higher speeds, of around 45 mph or more.

There’s really no way through menus or settings to have the xDrive40e default to being an electric vehicle when it’s fully charged up; you simply have to remember to hit the eDrive button on the center console with each start—but we'd advise avoiding the Eco Pro mode and its softened, laggy responses.

And the entire time you’re driving in pure electric mode, the big tachometer sits there at zero revs—reminding you that you don’t have to be such a spoil sport.

There’s also, by the way, a SAVE Battery mode, which lets you save or actually build back up a charge. We didn’t test this mode; but it’s only really of use in the U.S. if you’re driving into a major metro area, like New York or Washington, D.C., and plan to be moving at very low speed.

Quiet and underwhelming while the engine’s off

Secondly, the xDrive40e simply isn’t a lot of fun to drive in its all-electric mode. With its 111-hp electric motor acceleration happens at a reasonably brisk, silent rate up to around 30 mph, at which point you’ll find your right foot digging deep to get the sort of acceleration that’s considered normal for a vehicle like the X5. EV-only top speed is 75 mph, and it’s slow going leading up to that.

Oh, just don’t floor the accelerator. Do so—push past the detent and hold it—and the X5 plug-in busts out of its pure-EV painted prison cell and goes back to AUTO eDrive mode.

Perhaps the strangest thing about driving the xDrive40e in its all-electric mode is feeling the transmission shift up through its gears, with motor power. Somehow it feels like just another assurance that BMW wants to be ready with the gasoline engine at any instant, and that it doesn’t trust the electrics to be all alone.

As much as this vehicle feels like a poseur as an EV, it’s a fully fleshed out, well-engineered vehicle that’s perky and fun to drive in that AUTO mode it defaults to. Click over to the Sport mode and the system really comes into its own, with the electric motor providing boost like a supercharger and even acting to smooth shifts.

The simplified, modular approach works just fine for performance. We found only two reproducible powertrain hiccups in our test vehicle; one of them was a part-throttle shudder during moderate acceleration in second or third gear. The other was simply a painful pause in power delivery if we were already accelerating lightly, without the engine on, and suddenly ordered up a lot more power. Hearing the engine crank (via what’s called an “integrated starting element” here) and be clutched into the mix was the mechanically transparent soundtrack to that experience.

Separately, at an event this past month, we got the chance to push the X5 plug-in on a handling course and then on a muddy off-road course. It’s a bit surprising that this huge, heavy vehicle handles rapid changes of direction with vigor. Fording depth is actually a respectable 19.7 inches, and ground clearance is 8.2 inches.

Curb weight is a respectable 5,220 pounds. That’s still about 450 pounds more than the X5 xDrive35i, with its turbocharged V-6; it’s a lot of heft for a vehicle with just two rows of seating (for five)—although the rear seats comfortable enough for all-day touring in the outboard positions, and they’re split into three sections and fold forward.

Does it deliver the range and mpg?

We drove the X5 plug-in more than 400 miles over the course of a week. Over about 340 miles of mostly highway driving in hybrid mode, we averaged more than 25 mpg; yet factoring in just 40 more miles of mixed-condition city and suburban driving our 380-mile average had dropped below 24 mpg.

Just to verify that the X5 seems to get much better mileage on the highway than in town, we zeroed the trip computer and over about 12 miles of gentle suburban stop-and-go driving managed just under 21 mpg.

On one charge we managed 14.5 miles, using the climate control in its automatic mode and driving on the sprightly side, yet with the flow of traffic. On a second charge we turned off the climate control completely and tried to accelerate gently; this yielded 16.1 miles before the gasoline engine kicked in.

Some other outlets testing the xDrive40e have found this model’s electric-drive range to be far less (even less than 10 miles). We should note that the weather on the two days I really pushed the all-electric mode in the X5 was very mild, with temperatures in the low 70s.

Our test X5 xDrive40e summed up to $74,995, from a base price of $63,095, and included the Cold Weather Package (heated steering wheel, heated rear seats, retractable headlight washers) as well as the Premium Package (Comfort Access keyless entry, four-zone climate control, and satellite radio).

It also came equipped with the $4,350 M Sport package, adding seriously low-profile Dunlop run-flat tires that likely contributed to this vehicle’s tendency to tramline and track in difficult ways along all but perfect surfaces. We have a feeling this would be a happier vehicle yet with its base tire, wheel, and suspension setup.

Keep focusing on those numbers and they seem a little less meaningful. Because let’s be real: This isn’t the model you buy for its efficiency and range; it’s the model you might buy because you already like the 2016 BMW X5...and you can feel just a little bit better about it.