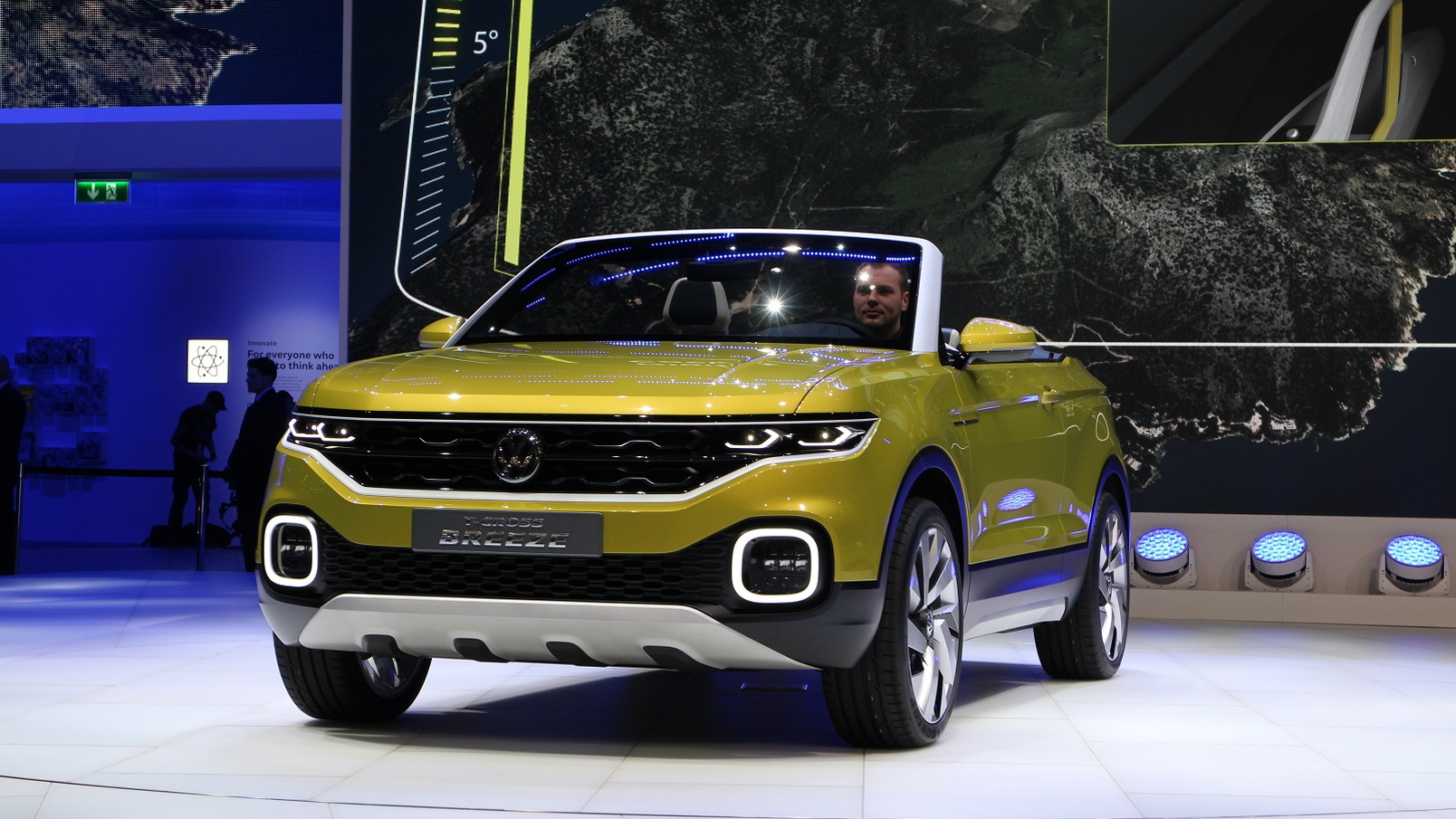 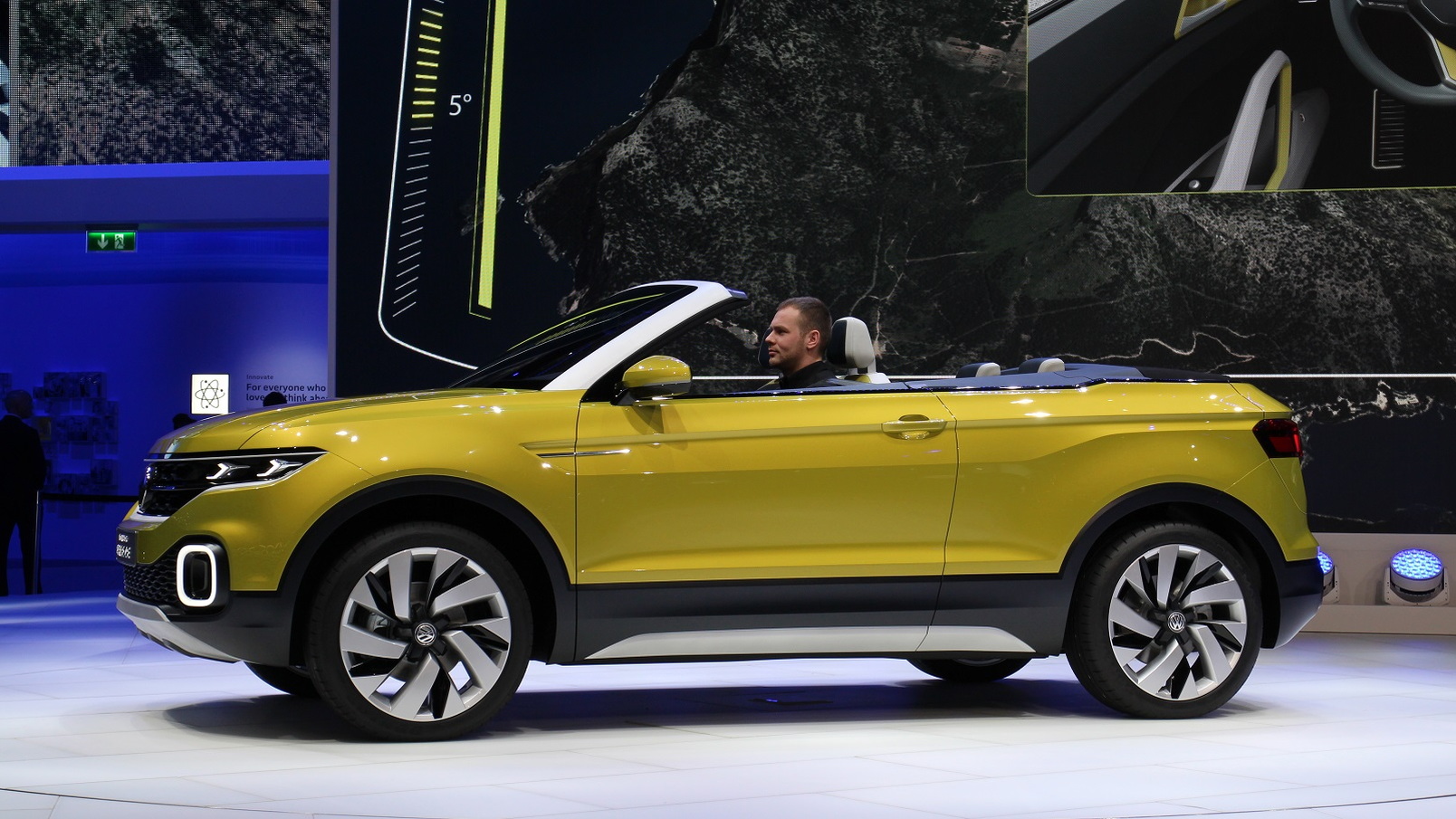 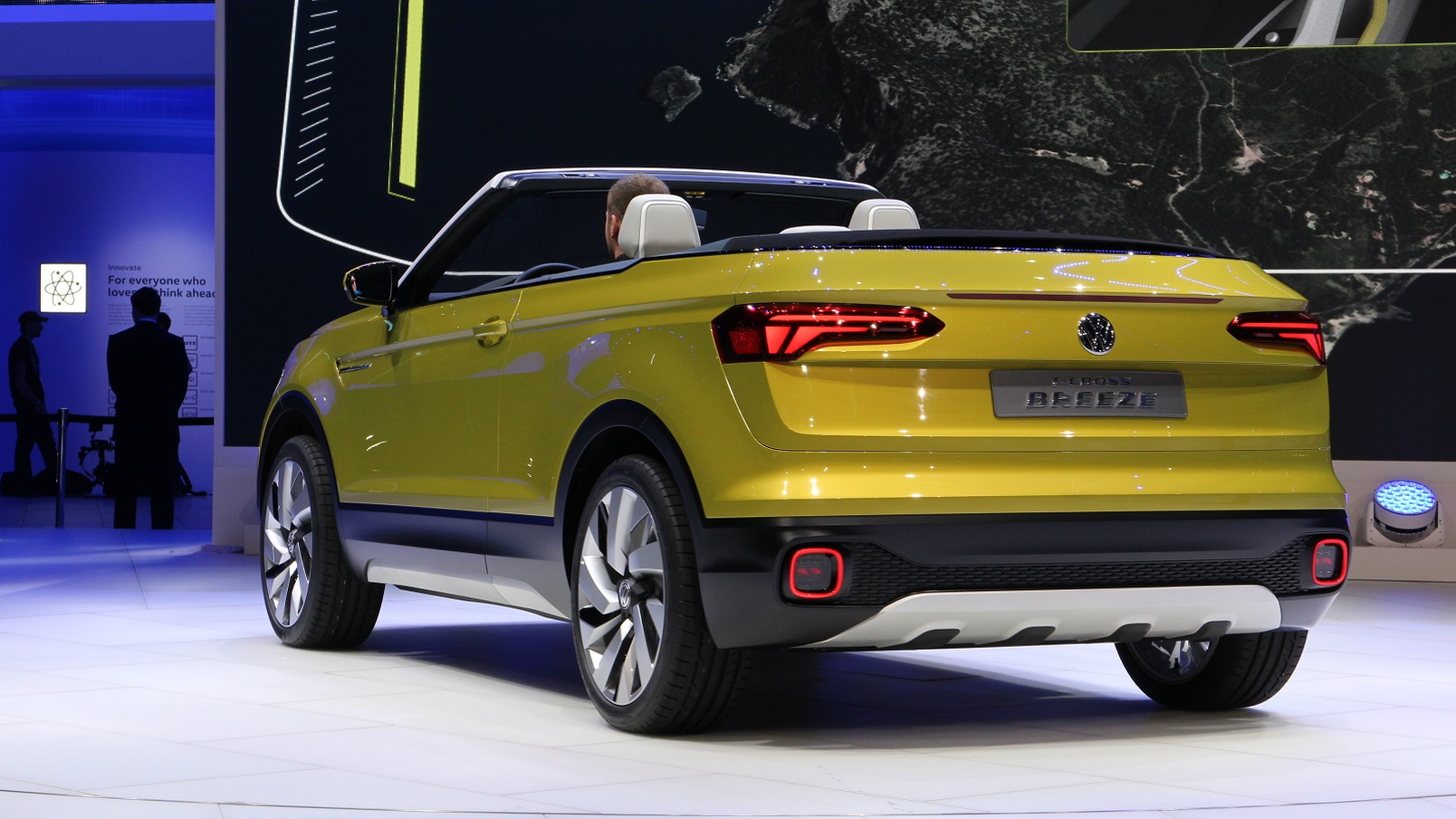 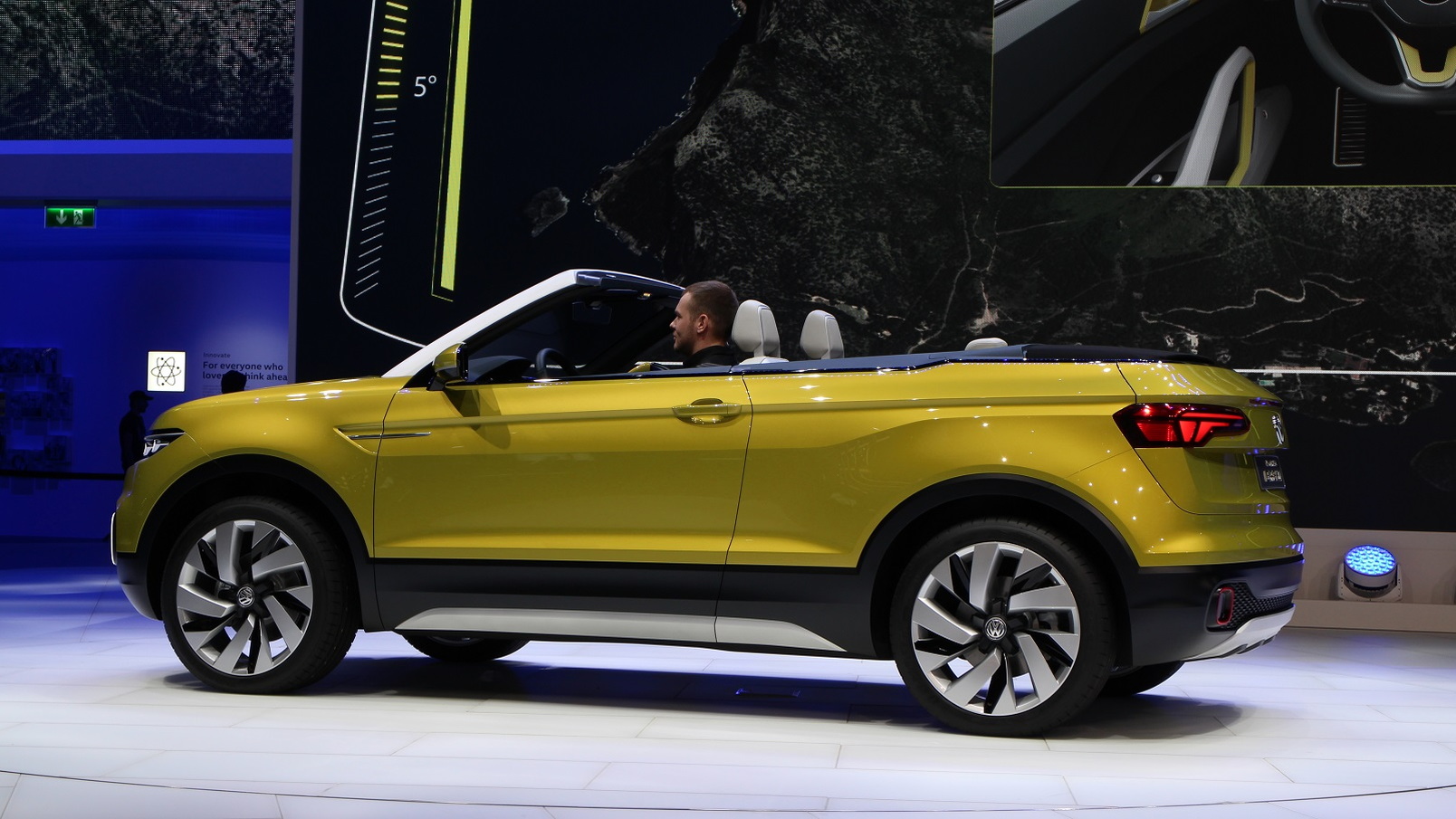 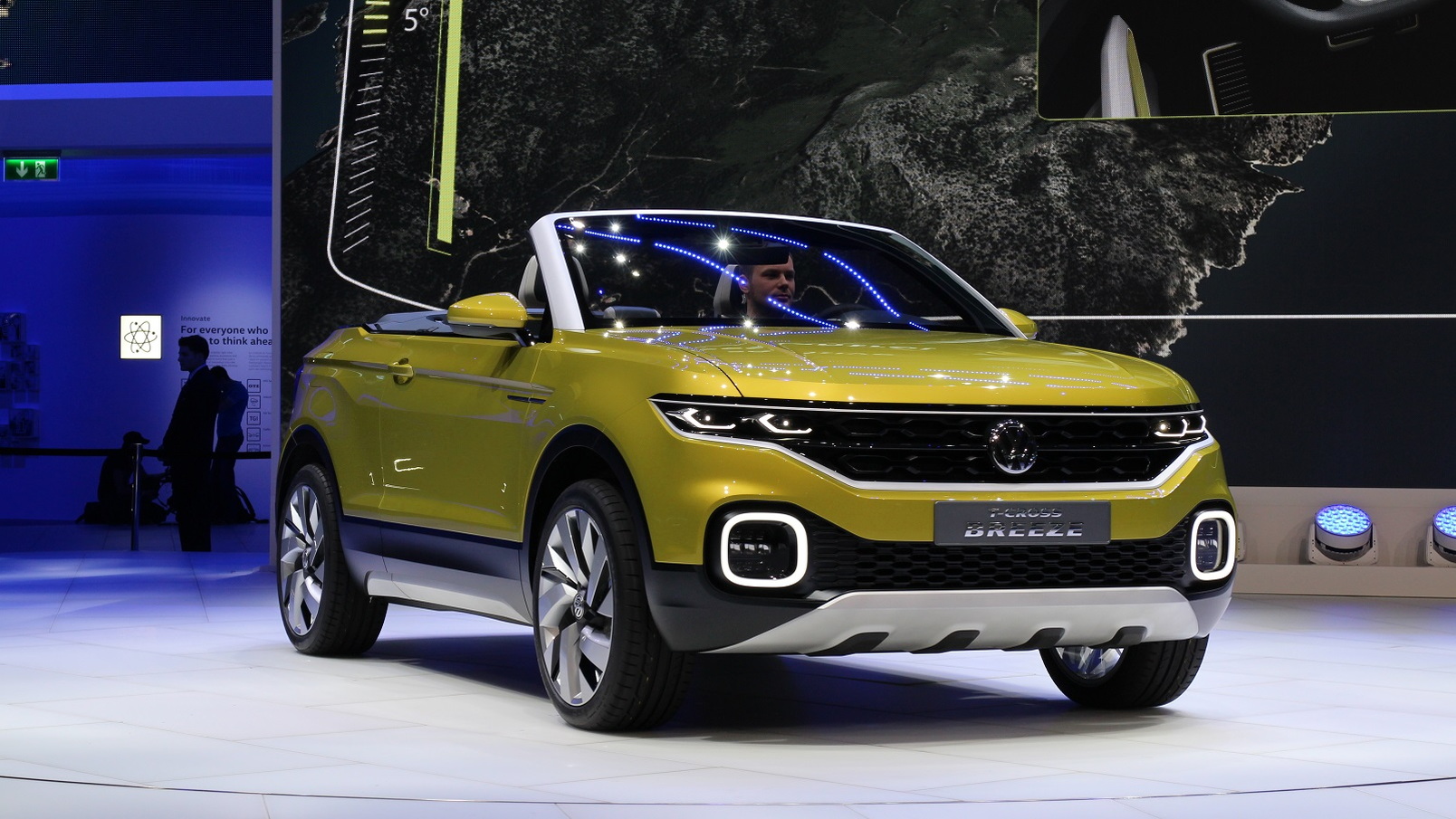 Does the world need a pint-size crossover that happens to be a convertible? Probably not, but such an attention-grabbing concept could give Volkswagen some traction ahead of the arrival of one of its two newly-planned crossovers positioned below the Tiguan, which for its second generation has grown considerably in size.

At this week’s 2016 Geneva Motor Show, the German automaker is presenting the T-Cross Breeze concept which previews a new subcompact crossover that will be based on the same platform as the next-generation Polo hatchback (VW's T-Roc concept from 2014 previews a compact model).

The T-Cross Breeze an unusual idea that hides some technologies and styling cues bound for production. Despite its retractable top, the concept is a design exercise that previews a new entry-level crossover rather than a glimpse into a new segment. To that end, the T-Cross Breeze is shaping up to be more or less a replacement for the company's CrossPolo sold overseas. At 162.7 inches from head to toe, the T-Cross Breeze is about half a foot shorter than a Buick Encore.

The concept is kind of like the everyman's Range Rover Evoque Convertible, at least in theory. Under its hood, the T-Cross Breeze boasts a 1.0-liter four-cylinder turbocharged gasoline motor that includes a stop/start system and is mated to a 7-speed dual-clutch transmission. Despite its taller-than-Polo stance, the T-Cross Breeze is only a front-wheel-drive model, which helps it achieve 47 mpg combined on the European cycle, according to VW.

Notably, VW says that the T-Cross Breeze builds on some interior technologies from the Budd-e electric minivan concept that debuted earlier this year at the Consumer Electronics Show in Las Vegas.

Inside, the concept largely replaces buttons, switches and knobs with touch-sensitive surfaces that could preview a "by-wire" control setup for a future production model. Even the gear shift has been shown the door with a trio of glass scroll wheels handling all driving functions. Digital instrumentation, part of VW's new Active Info Display, also hints at what could make production someday.

While we know VW plans to offer its new compact crossover based on the T-Roc concept in the United States, it’s not clear if the subcompact model previewed by this T-Cross will make it over as well. We’ll update you as soon as more is known.

Note, other high-riding vehicles from the VW brand include a seven-seat version of the new Tiguan, a seven-seat model to be built at the plant in Chattanooga, Tennessee, and a next-generation Touareg. Some of the mentioned models may also spawn coupe-like derivatives.