The first major motorsport event of the year is on this weekend in Daytona, Florida. We are, of course, talking about the Rolex 24 at Daytona, the opening round of the 2016 IMSA WeatherTech SportsCar Championship, which this year sees several new race cars competing including Ford Motor Company’s [NYSE:F] new GT. Others include racing versions of Audi’s second-generation R8, BMW’s M6, Lamborghini’s Huracán and Porsche’s latest 911.

Unfortunately, teams faced some terrible weather during qualifying yesterday. It turned out the fastest laps were achieved by drivers in the GT Le Mans (GTLM) class and not the top Prototype class. The quickest on the day was Nick Tandy in the GTLM-spec Porsche 911 RSR. He lapped the 3.56-mile road course in 2:01.408, though he will start behind 13 Prototype entries and eight Prototype Challenge entries because of the variable conditions during the qualifying session.

A Porsche was also driven to pole in the other GT class, GT Daytona (GTD). Norbert Siedler driving the new Porsche 911 GT3 R from Park Place Motorsports laid down a best time of 2:05.798. 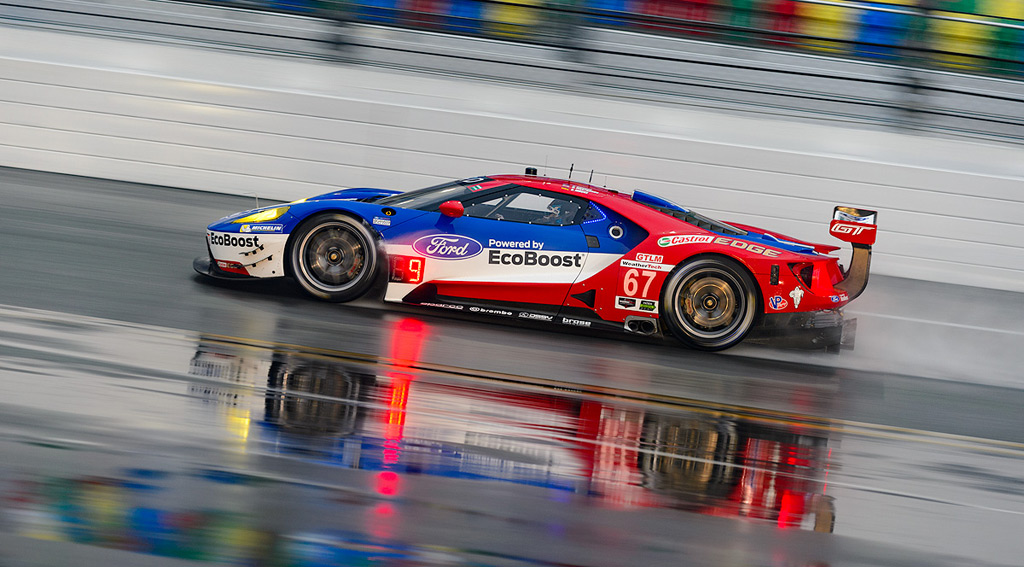 Overall pole position for the race went to Russian driver Mikhail Aleshin behind the wheel of a Nissan-powered SMP Racing entry in the Prototype class. His best time was a 2:05.793.

Quickest in the Prototype Challenge class was Johnny Mowlem behind the wheel of an Oreca. His best time was a 2:05.708.

Because of the conditions, several teams sat out qualifying to ensure they still had a car to race this weekend. Ford’s new GT made it out on the wet track but failed to shine. Scott Dixon in one of the two GTs fielded even ran off the truck. The best time was set by Joey Hand who managed a 2:06.758 to secure ninth position in the GTLM class. The two GTs are both fielded in the GTLM class by Ford Chip Ganassi Racing.

Teams will now enjoy some more practice time before the race starts on Saturday at 2:40 p.m. Eastern Time. The good news is that weather conditions are looking much better for the weekend. Enjoy the race, and watch out for our full results coverage on Monday.