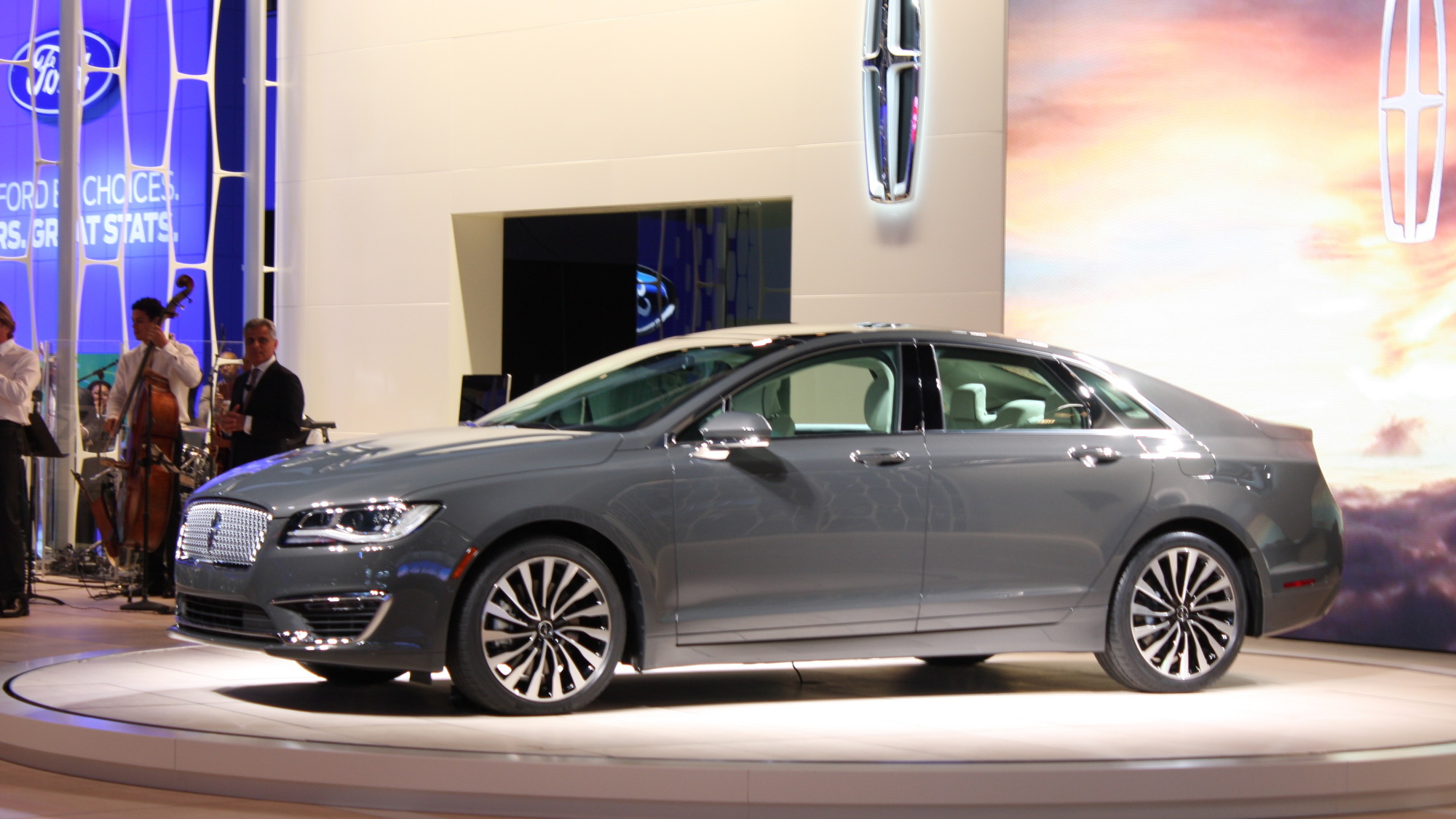 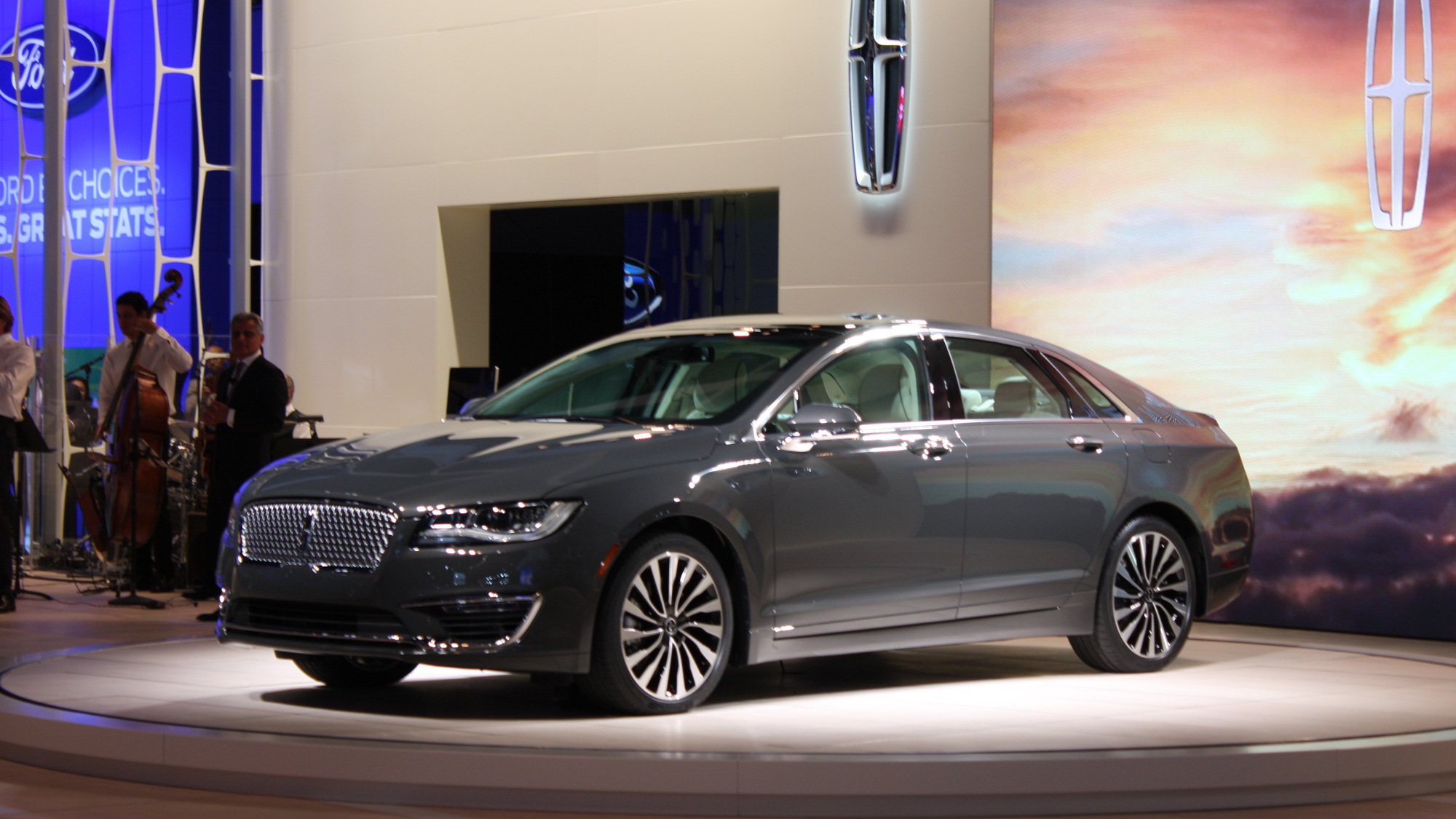 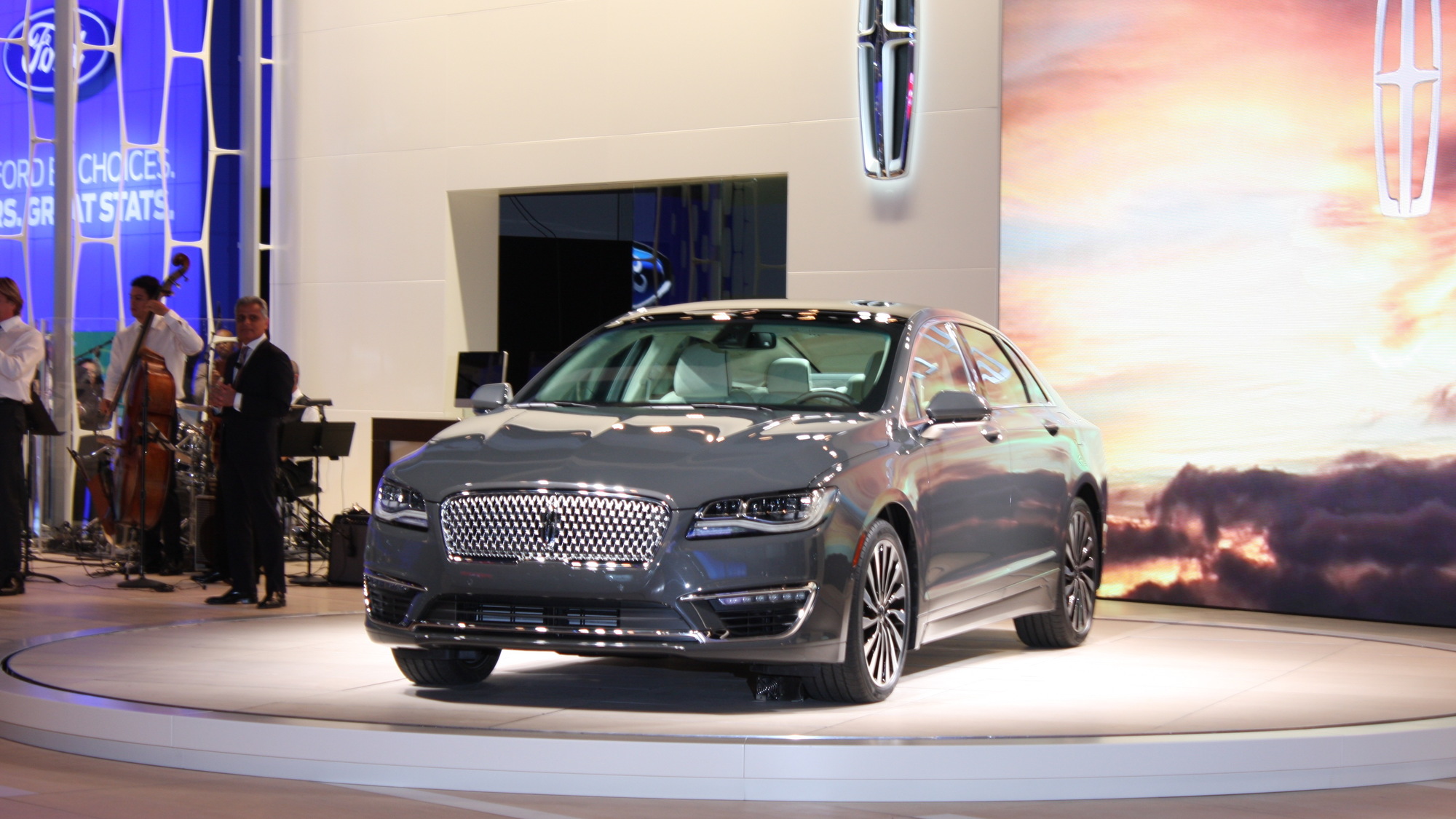 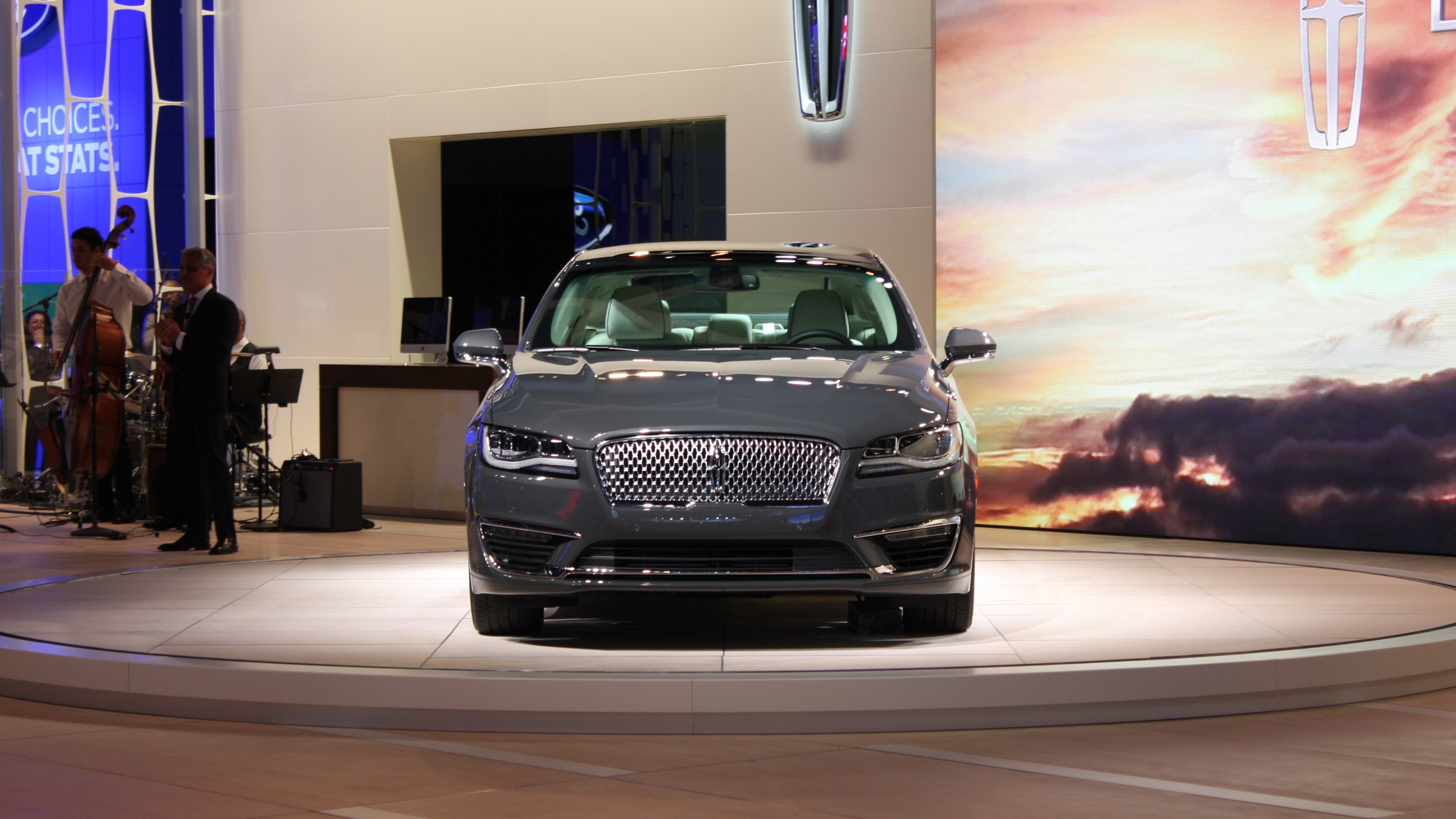 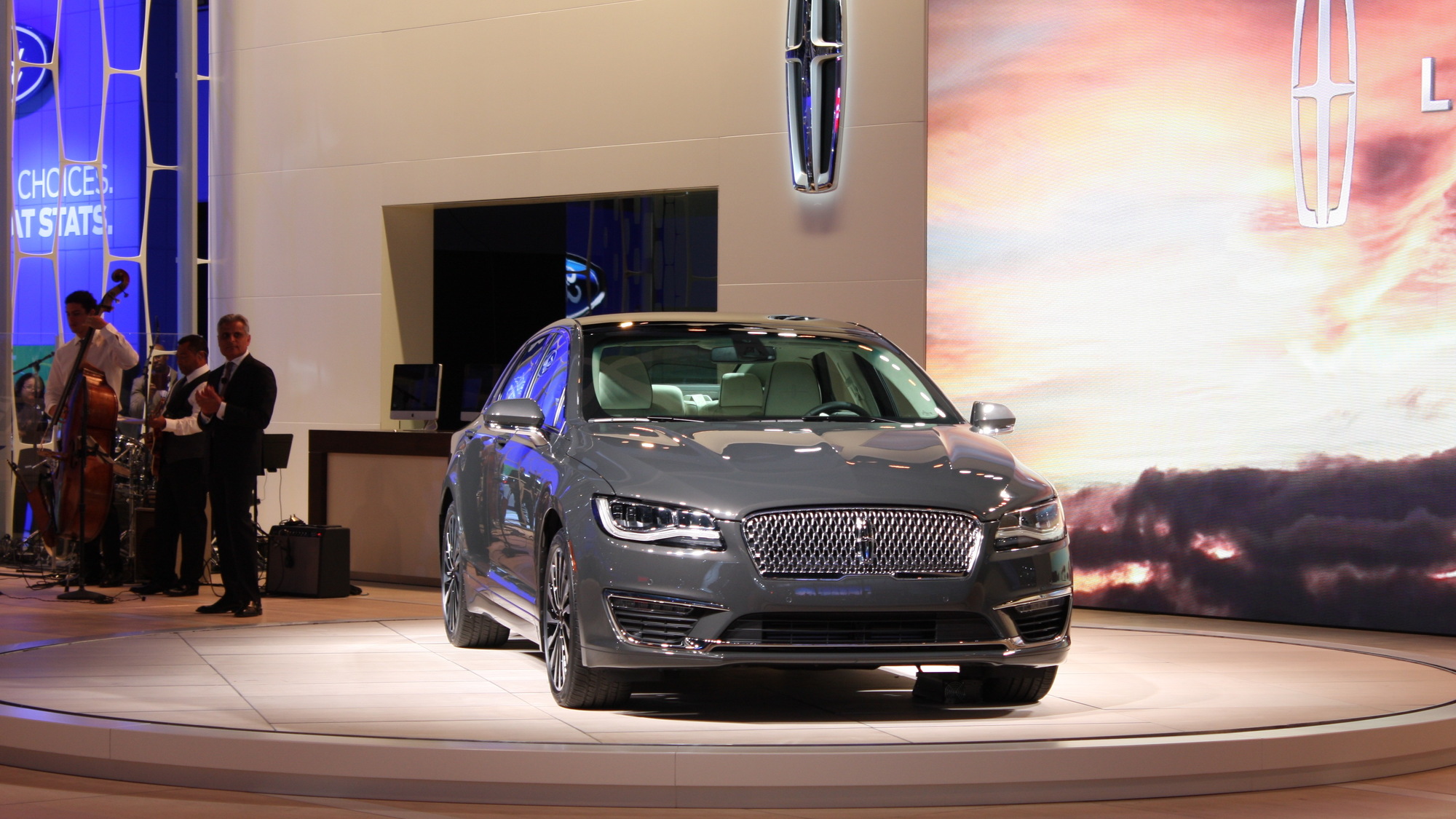 Lincoln today introduced a major update for the 2017 MKZ mid-size sedan, highlighted by a new grille from the Continental Concept car and a new 400-horsepower twin-turbocharged V-6.

Most noticeable is the look. The MKZ, which is scheduled to go on sale next summer, will be the first vehicle to get the brand's new corporate face. The trapezoidal grille features the Lincoln badge in the center, and that shape is reflected in the grille mesh. Also new are adaptive LED headlights, different 18- and 19-inch wheel designs, and a revised lower rear apron.

Under the hood, the MKZ will feature a Lincoln-exclusive engine, something automotive pundits have suggested for Lincoln for years. That new engine is a twin-turbocharged 3.0-liter V-6. When teamed with a new all-wheel-drive system, which includes torque vectoring for the rear wheels, it will produce 400 horsepower and 400 pound-feet of torque. Oddly, this engine will also be offered with front-wheel drive, though the horsepower figure will drop to about 350 but torque will be unchanged at 400 lb-ft. Lincoln isn't saying how it will prevent torque steer, but it is boasting that the MKZ will offer effortless performance. With that in mind, we think Lincoln will retard engine output at lower speeds.

That's not all the engine news. The 300-horsepower 3.7-liter V-6 in the current model will give way to a 2.0-liter turbocharged four-cylinder making 245 horsepower. This is the same EcoBoost 2.0-liter as in Ford products but Lincoln will not use the EcoBoost brand name for it or the 3.0. The current MKZ's hybrid model, which pairs a 2.0-liter four-cylinder with an electric motor to deliver 188 horsepower and 40 combined mpg, will return and likely at the same price as the 2.0-liter turbo.

When the 400-horsepower version of the 3.0 is ordered, buyers will be able to opt for a Driver's Package that will include a unique grille, 19-inch wheels, ebony brake calipers, adjustable dampers, AWD with Dynamic Torque Vectoring, aluminum pedals, carbon fiber interior trim, and a dark ebony upholstery with white contrast stitching on special sport seats.

The MKZ's interior gets a major update as well. The slider controls give way to actual knobs and buttons, and the materials are improved with real aluminum and more soft-touch surfaces. Active noise cancellation will be offered, and so will three Black Label high-end interior trim themes: carry-over saddle-colored Thoroughbred, red Vineyard, and white Chalet. Other available interior features will include a panoramic sunroof and two versions of a Harmon Kardon Revel audio system, one with 14 speakers and the other with 20.

The MKZ will also add several safety and convenience technologies, including adaptive cruise control with stop and go, enhanced park assist with perpendicular parking and park out features, Pre-Collision Assist with Pedestrian Detection, and a button-activated auto hold function that keeps the car in place at stops until you hit the throttle.

The timing of the new MKZ is interesting. The MKS is a much older car, so it should be next in line for an update. However, the forthcoming Continental will be about the size of the MKS and will likely take its place at the top of the Lincoln lineup when it arrives next year.