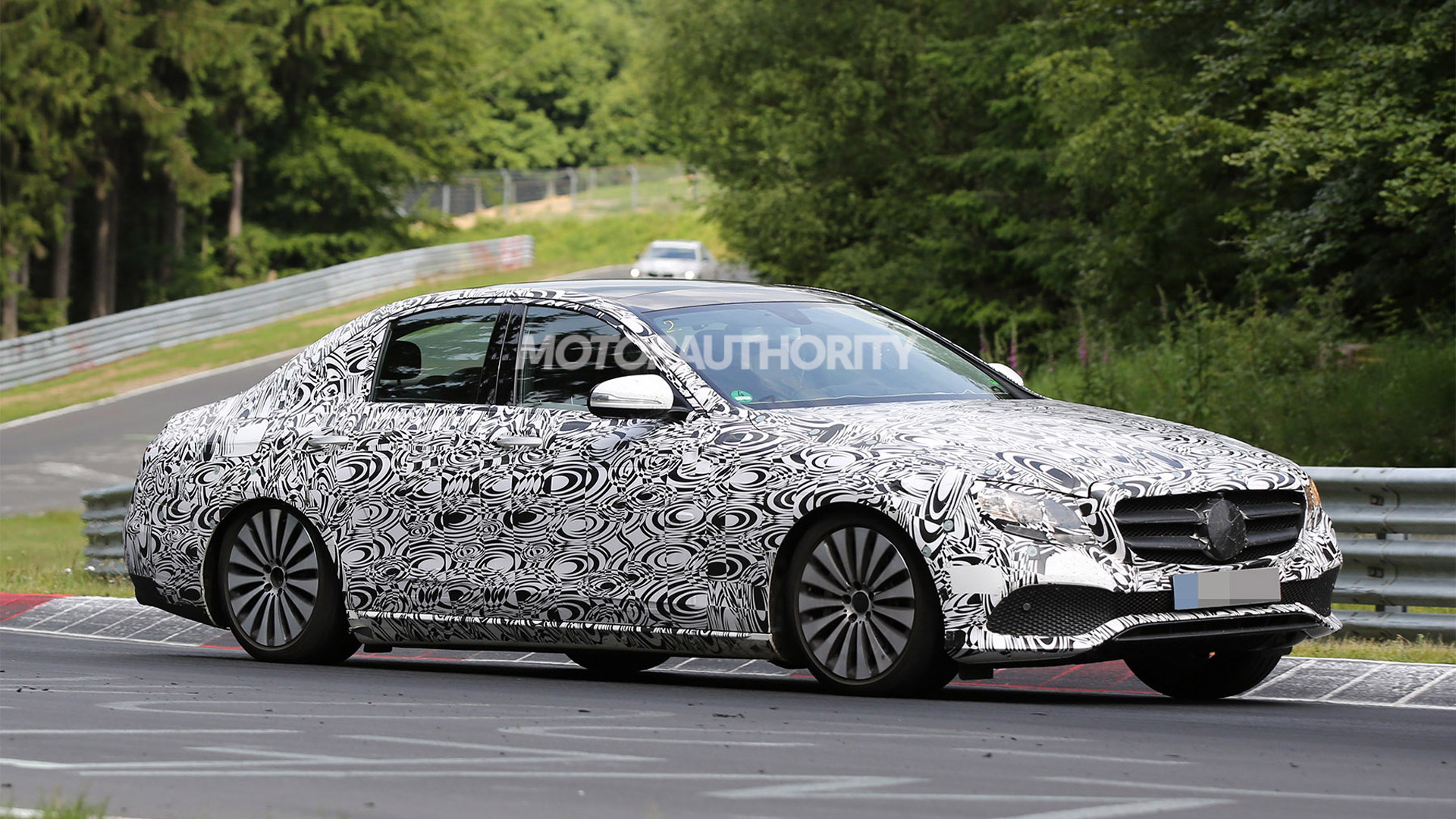 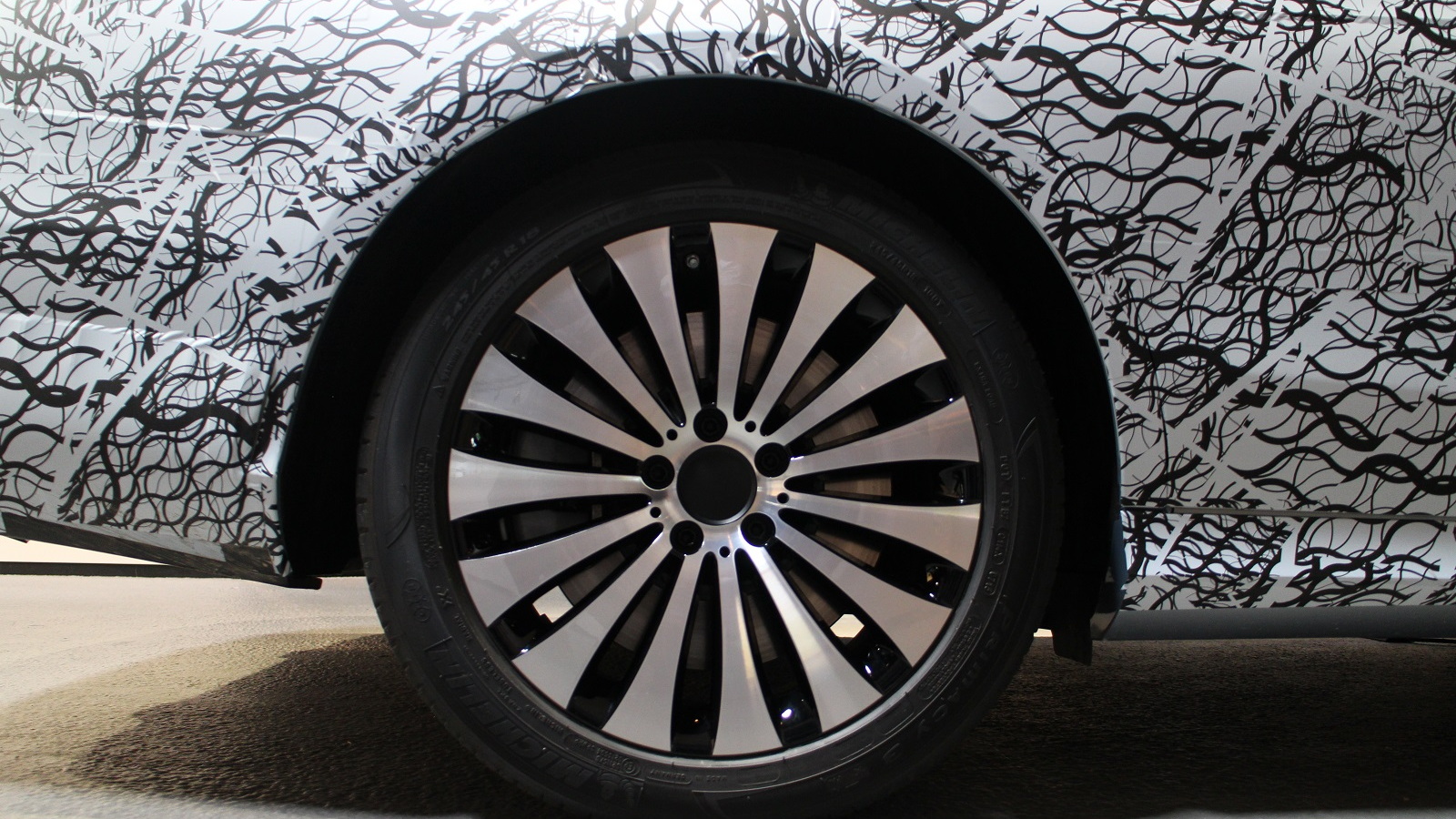 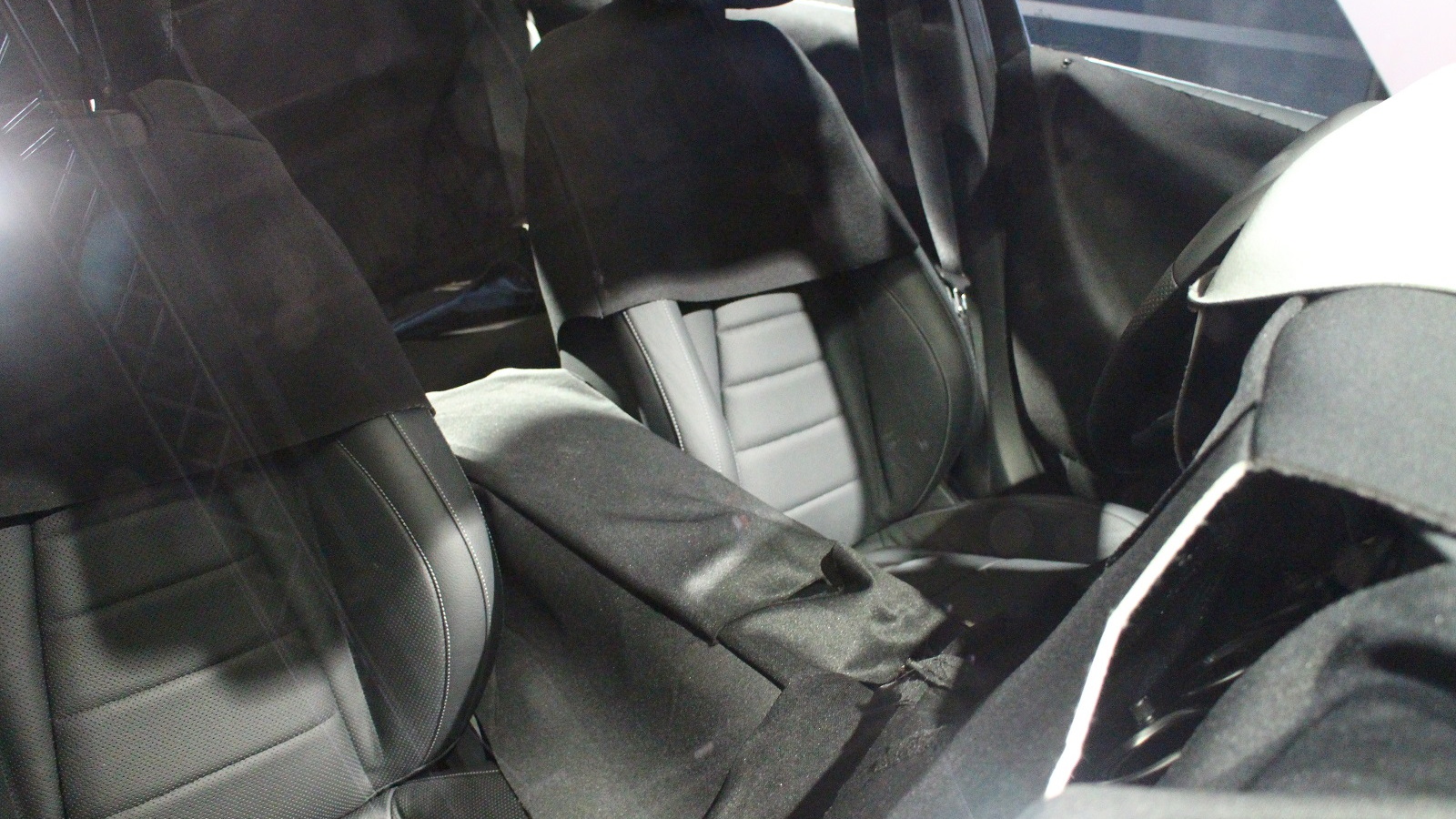 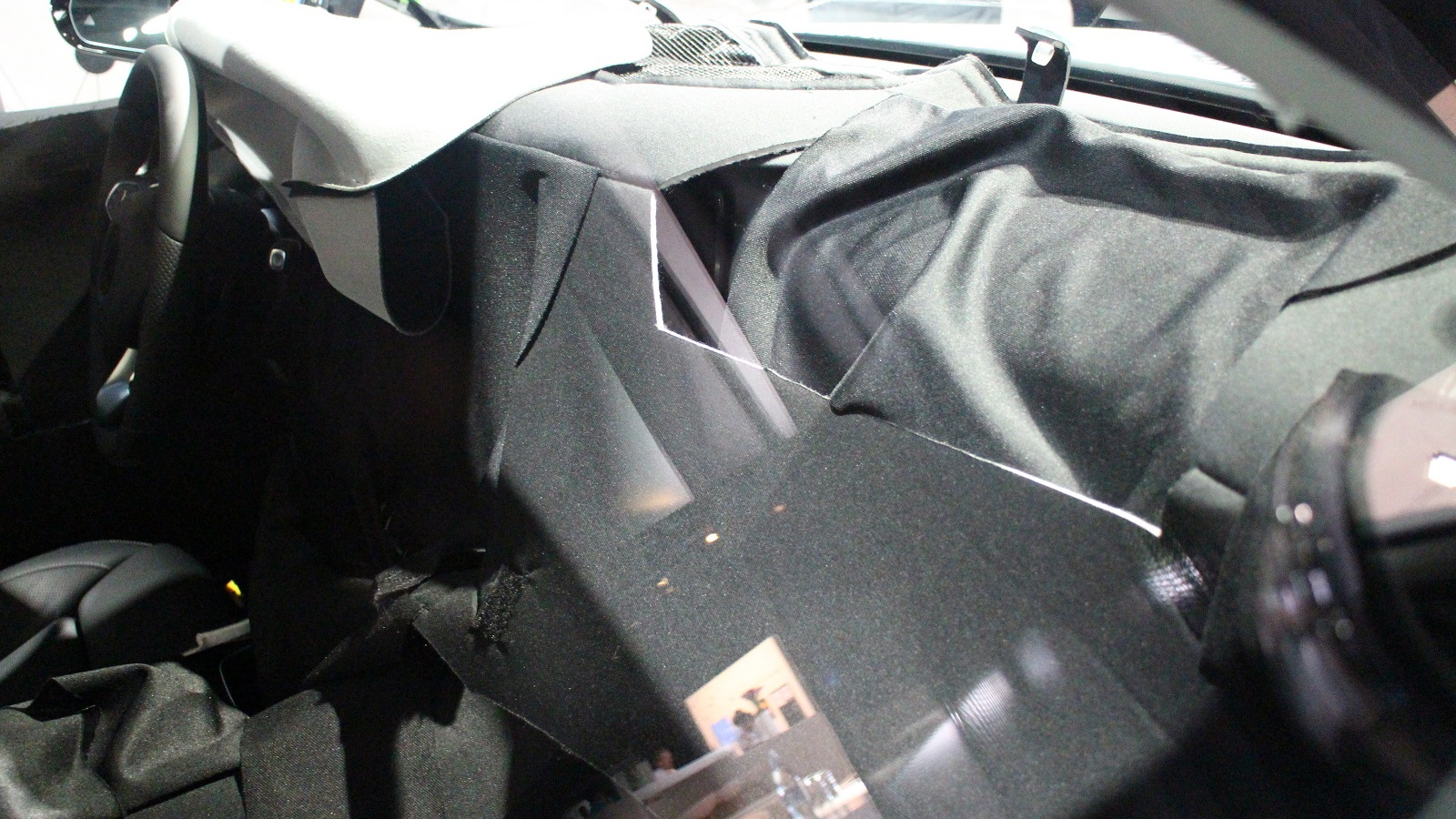 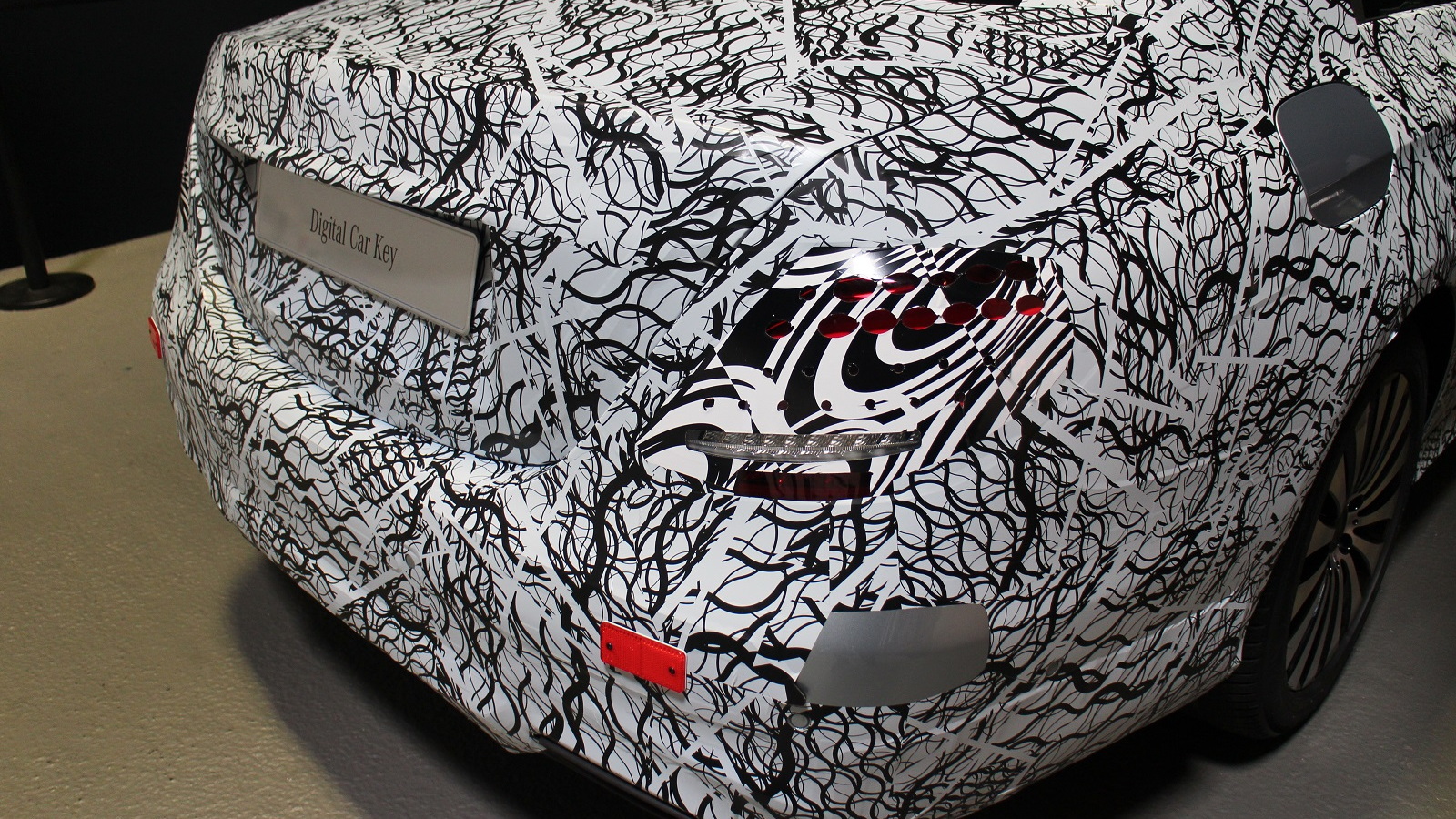 The 2017 Mercedes-Benz E-Class sedan will be officially unveiled next January at the Detroit Auto Show, but from the number of spy shots already published, it's pretty obvious that it'll have a strong family resemblance to the S-Class and C-Class before it.

The company showed off its own camouflage-clad prototype at a Technology Day background briefing today in Sindelfingen, Germany.

But the new Mercedes E-Class will also introduce new and expanded safety and self-driving capabilities, taking the company further down the road toward a future of more autonomous vehicles and accident-free driving.

Several of the new technologies expand on capabilities and systems launched in the S-Class for 2013 and the C-Class for 2015. 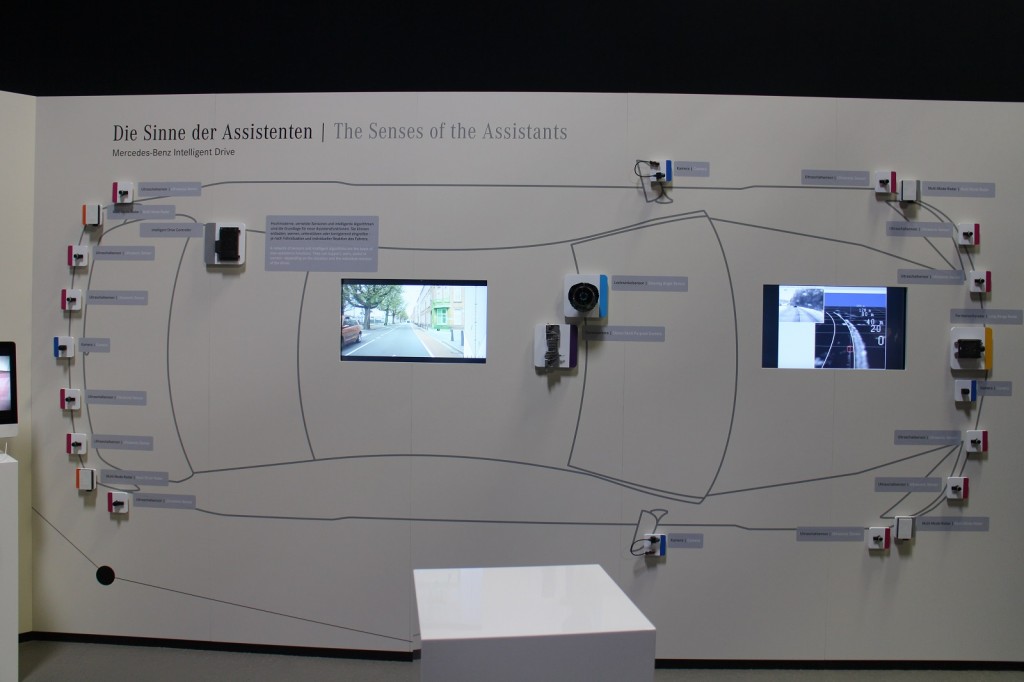 The Sensor Fusion previously introduced now incorporates no fewer than 23 sensors: 12 ultrasonic (six at the front, six at the rear), four multi-mode radar (one at each corner), four cameras (front, rear, and one in each door mirror), a long-range radar up front, a stereo multipurpose camera at the top of the windshield, and a sensor for steering column position as well.

Among the active safety improvements are:

Intelligent Drive: This combination of adaptive cruise control and lane-keeping assistance now both keeps the new E-Class at a safe distance from the car ahead at speeds from 0 to 125 miles per hour.

It also uses active steering assistance to keep the car in its lane, and at speeds up to 80 mph, Mercedes says the system doesn't necessarily need clear lane markings to do so. 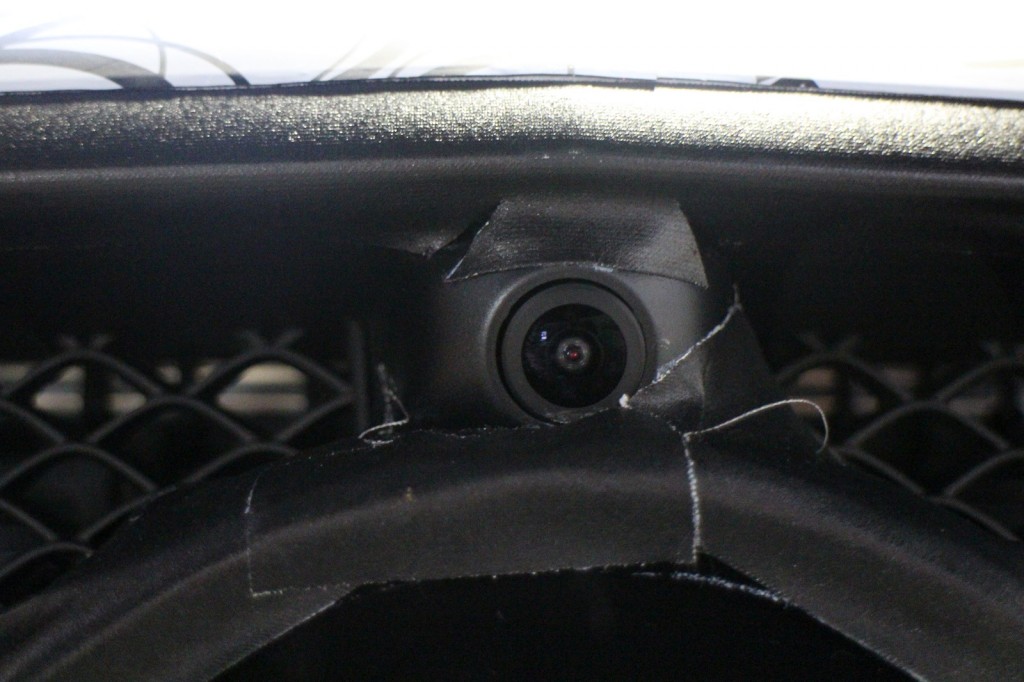 Speed Limit Pilot: This optional feature of Intelligent Drive can automatically adjust the vehicle's speed to match local limits, either those included in navigation mapping or those read by the car on roadside speed-limit signs.

Active Brake Assist: Enhancements to this existing system detect slower, braking, or stationary vehicles, and now also identify cross traffic at intersections, stopped traffic ahead, and pedestrians in danger ahead of the vehicle. It will warn the driver of dangerous situations, apply appropriate brake force to avert an accident when the driver brakes suddenly, or brake automatically itself in an emergency.

Evasive Steering Assist: This system calculates and supplies the necessary torque when the driver suddenly steers to avoid an accident, most notably a pedestrian who has moved into the line of travel. 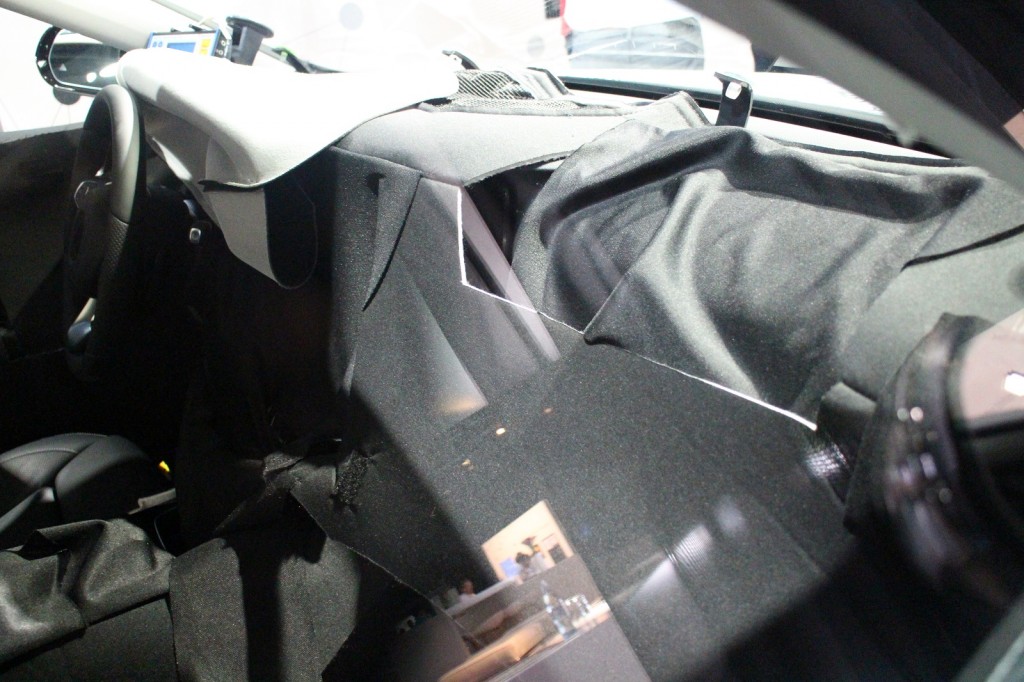 Remote Parking Pilot: For the first time, drivers can use a smartphone app from outside the car to direct it either to self-park in a perpendicular space or to move straight ahead into (or back out of) a space narrower than would be required to allow the doors to open for the driver and passenger to exit.

Car-to-X Communications: This system exchanges information via a built-in mobile-phone transponder with other vehicles that are appropriately equipped, giving drivers earlier warning about hazardous situations ahead that are not yet visible. Two examples would be an accident ahead or the tail end of a line of stopped traffic. 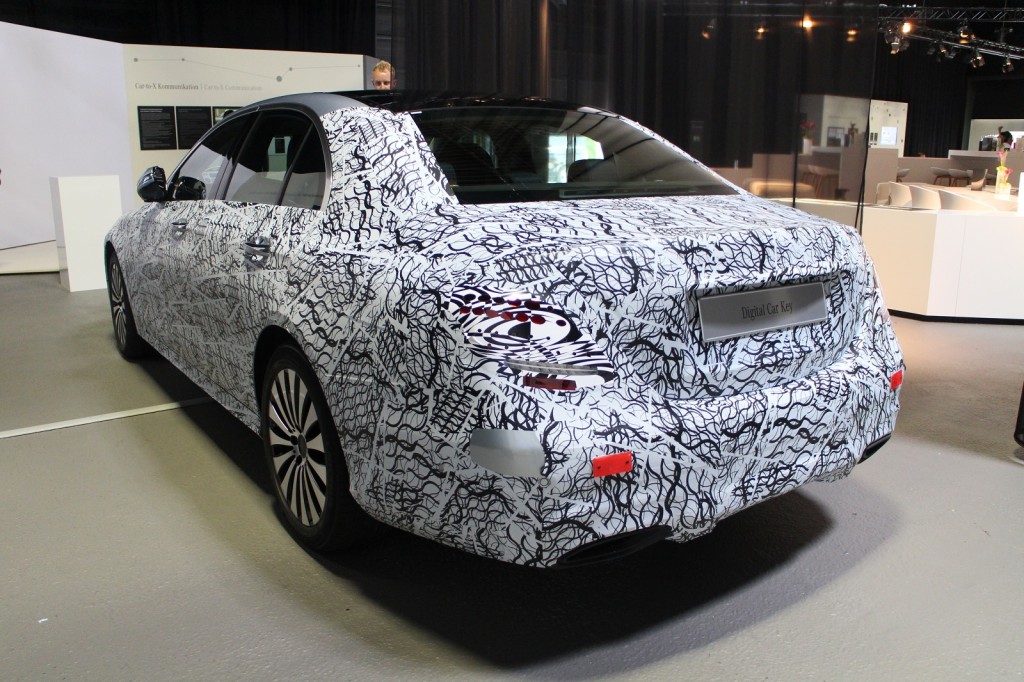 Pre-Safe Impulse Side: This system uses a pyrotechnic air chamber in the outer bolsters on each side of the rear seat, to move outboard occupants toward the center of the car to get them further away from an unavoidable side collision.

Pre-Safe Sound: To reduce the hearing damage from a sudden loud crash (which is usually temporary), a sound generator built into the car's audio system transmits a broad-spectrum sound at just 25 decibels if it detects an unavoidable collision ahead. That sound conditions the ear better for the upcoming loud noise.

CHECK OUT: BMW Shows Off Fuel Cell-Powered i8 And 5-Series GT

The company also showed its latest multibeam LED headlamps, now with 84 individual LEDs, each separately controlled to distribute light precisely for the brightest possible illumination of the road ahead--but without blinding oncoming cars. 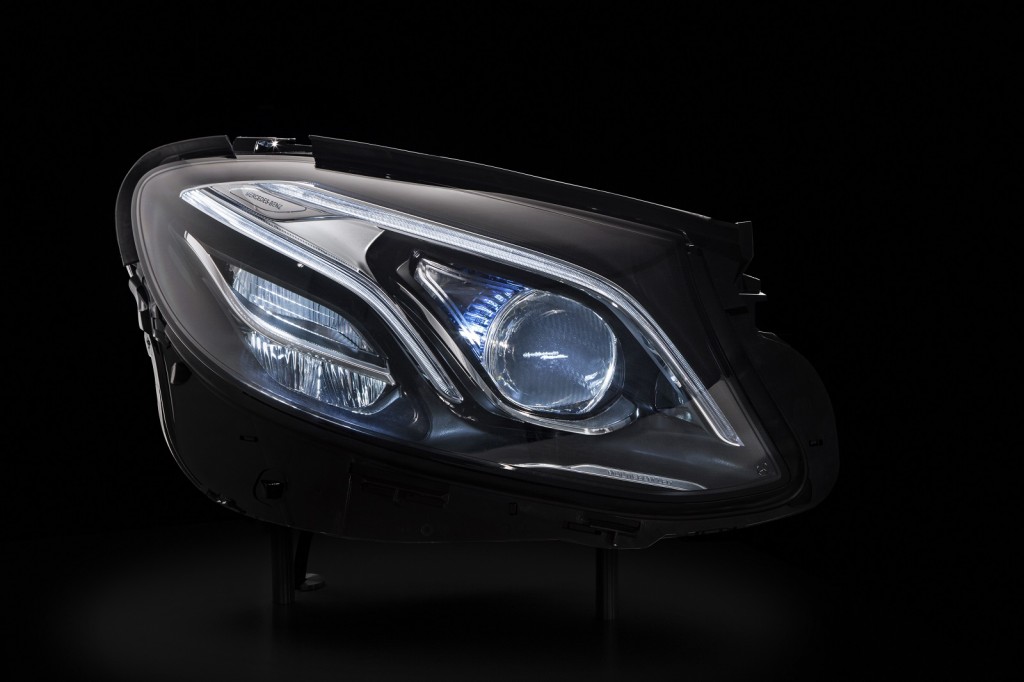 The company underscored that it had designed the electronics and communications systems of the new E-Class to permit it to add additional features more easily during the car's anticipated seven-year life cycle.

That does not mean, however, that new capabilities can be retrofitted to the new E-Class when a car is two or three years old--a selling point of the Tesla Model S, with its frequent over-the-air software upgrades to add and upgrade features via software.

During a lengthy discussion of that idea, Alexander Schaab, of the active safety and driver-assistance systems group, suggested that the company preferred to focus its resources on adding new features to new models.

WATCH: Yes, The Grand Cherokee Trackhawk Is Coming; No, This Isn't It

Never mind over-the-air updates, he suggested. Even upgrades to the car's fundamental operating and safety systems performed at the dealer had to be installed with the very highest levels of security, with hundreds of thousands of miles of testing to the modified functions. 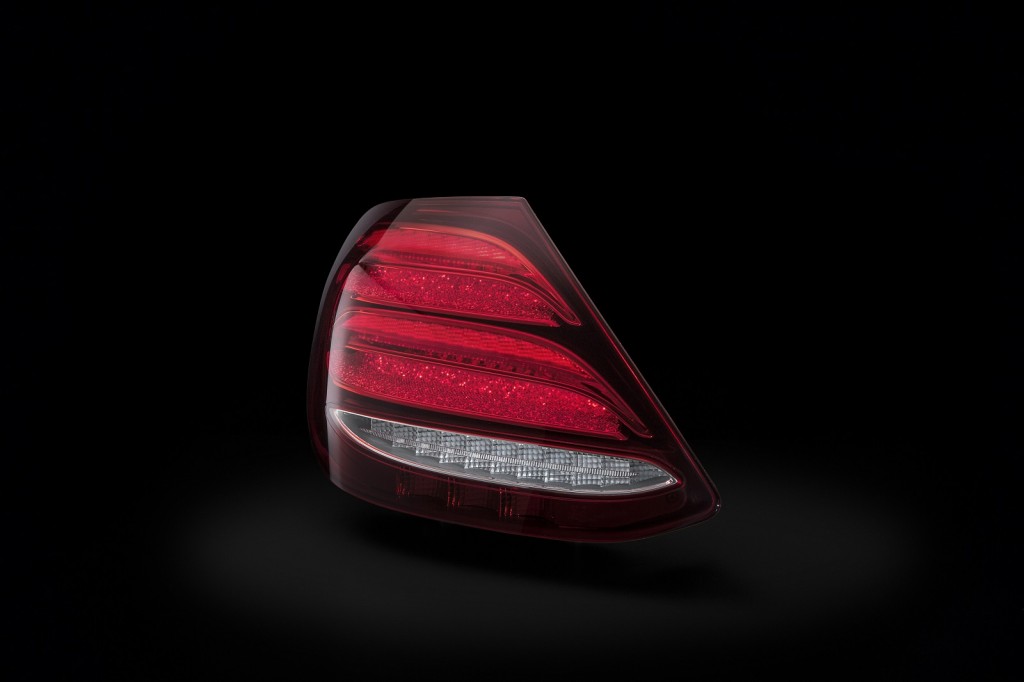 Schaab acknowledged, however, that Mercedes expected buyers accustomed to regular updates to their consumer electronics devices to start asking why their cars couldn't be similarly updated.

Such demands will come especially from its youngest buyers, he said, including buyers of the compact CLA sedan who are new to the brand.

"Discussions are now underway" about whether and how such upgrades might be envisioned in the future, he said.

And he stressed that it would likely still be many years before a two- to five-year-old Mercedes-Benz could be retrofitted with more modern electronic functions--if ever.