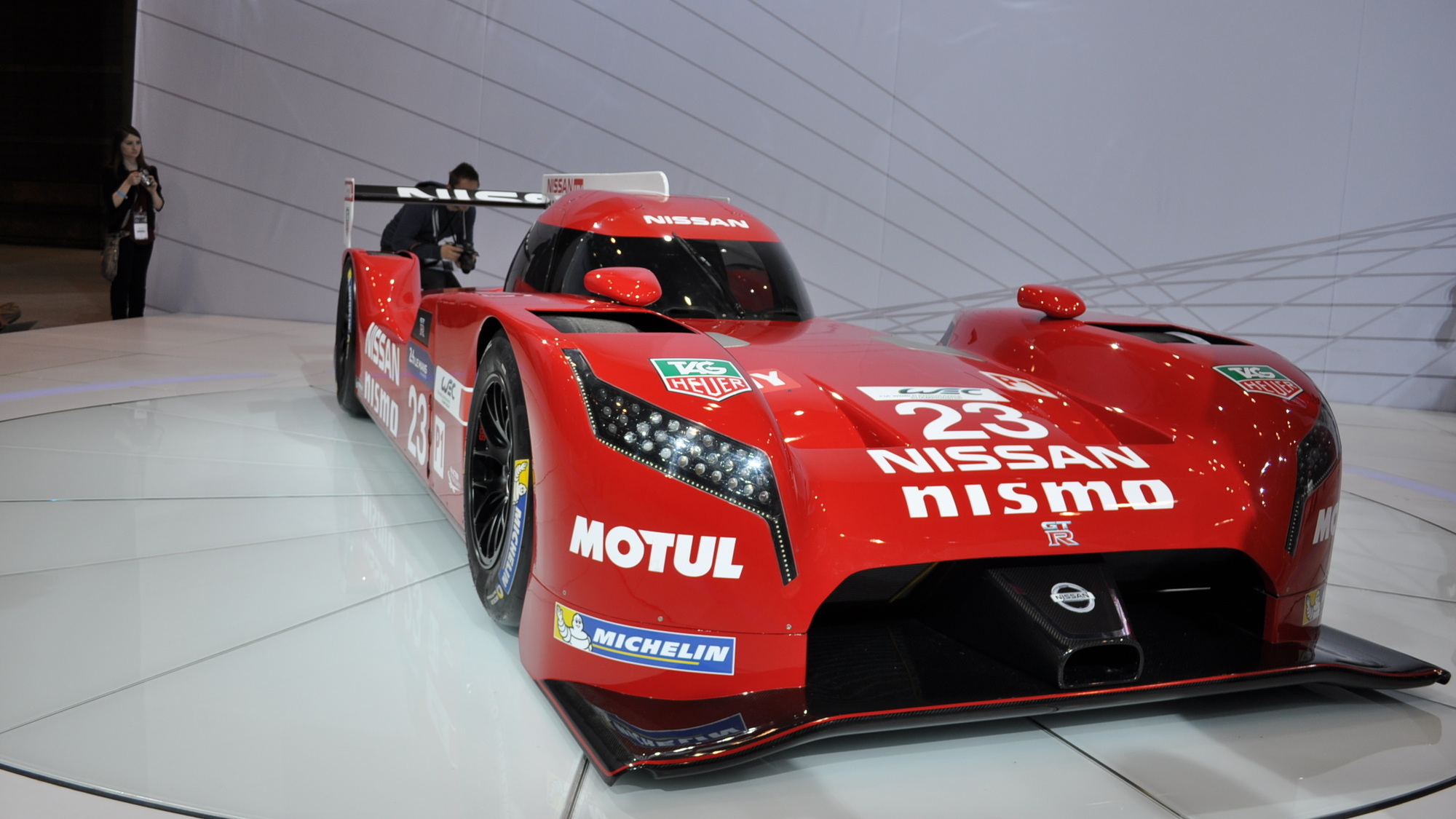 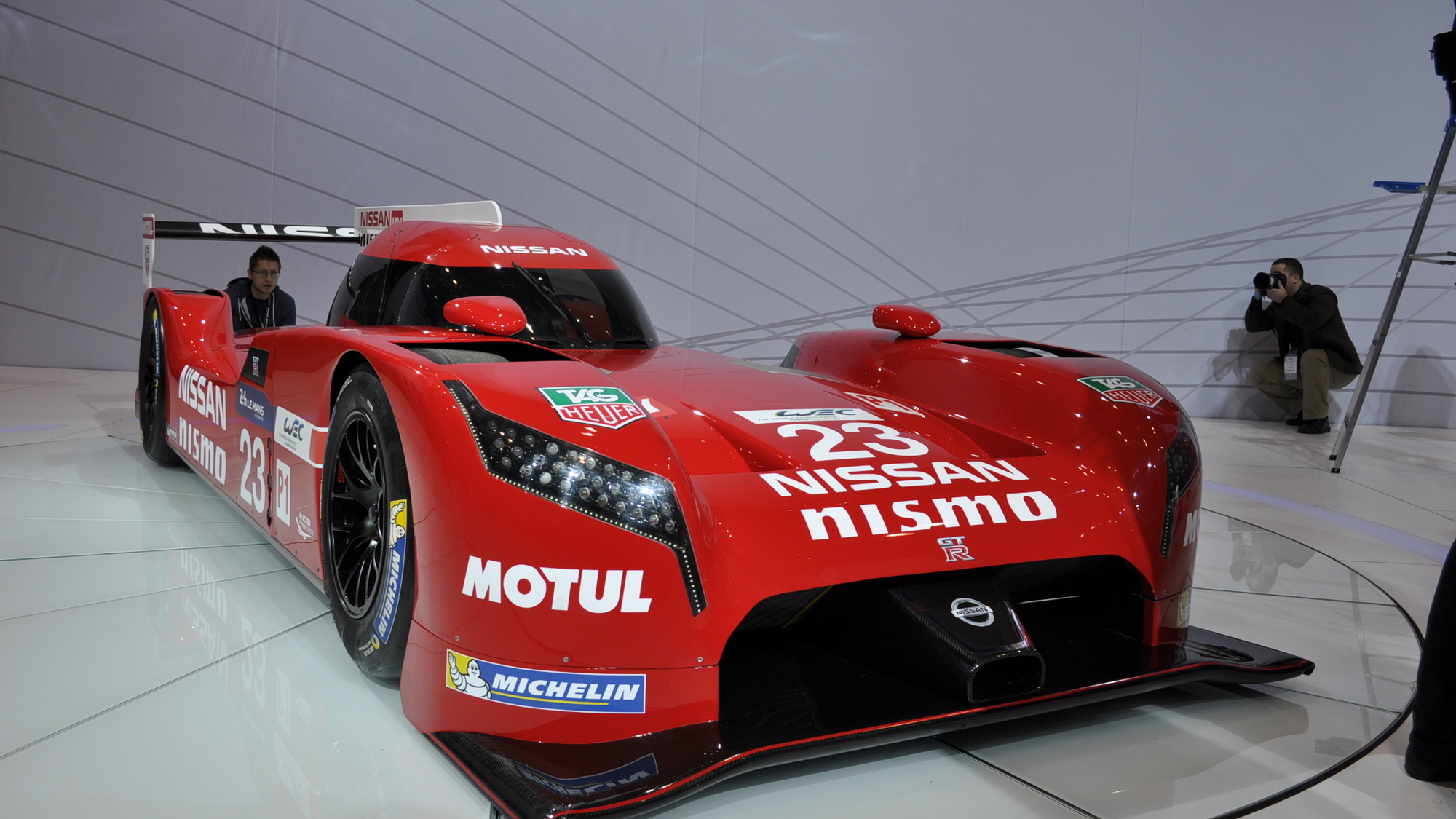 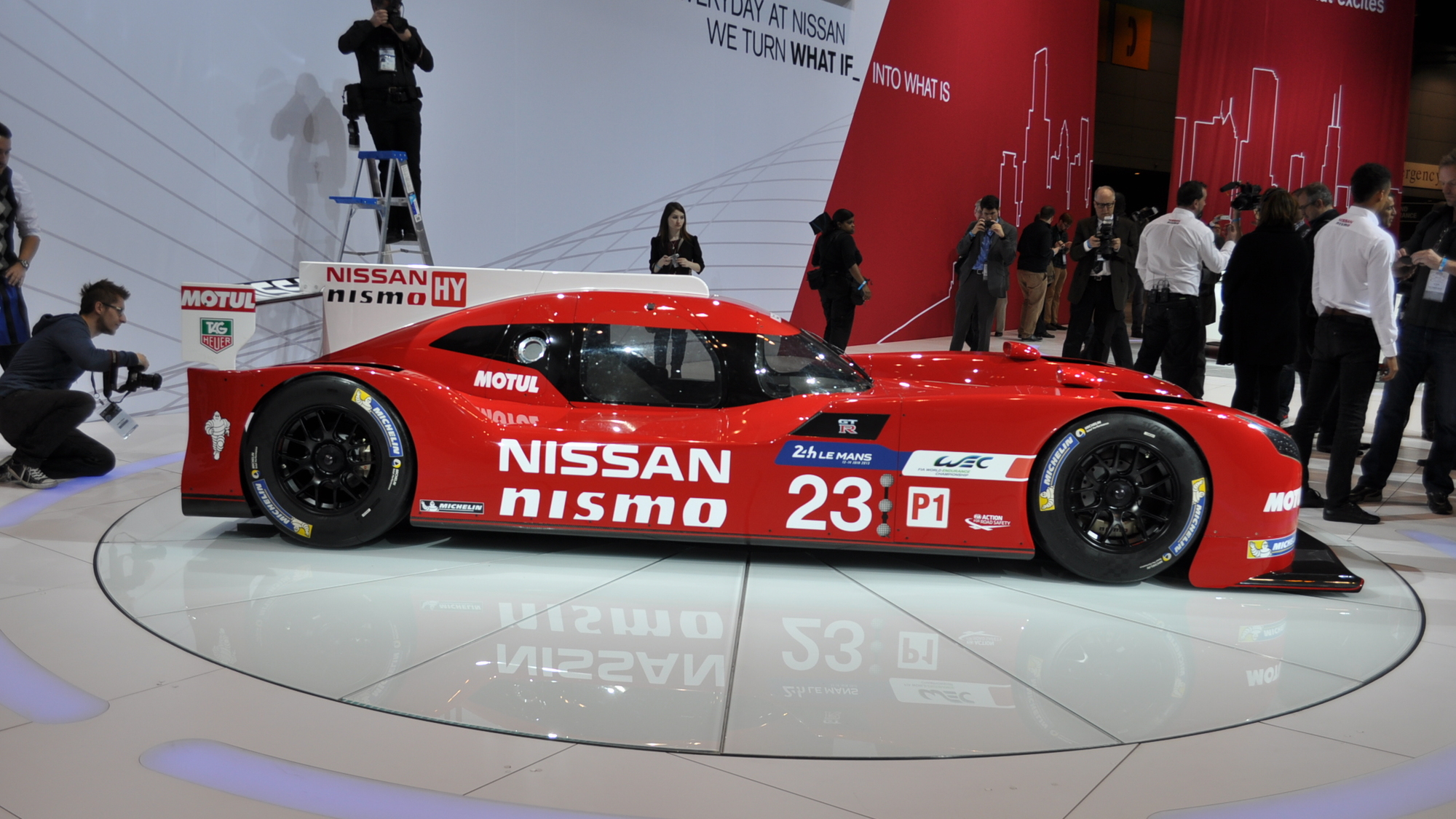 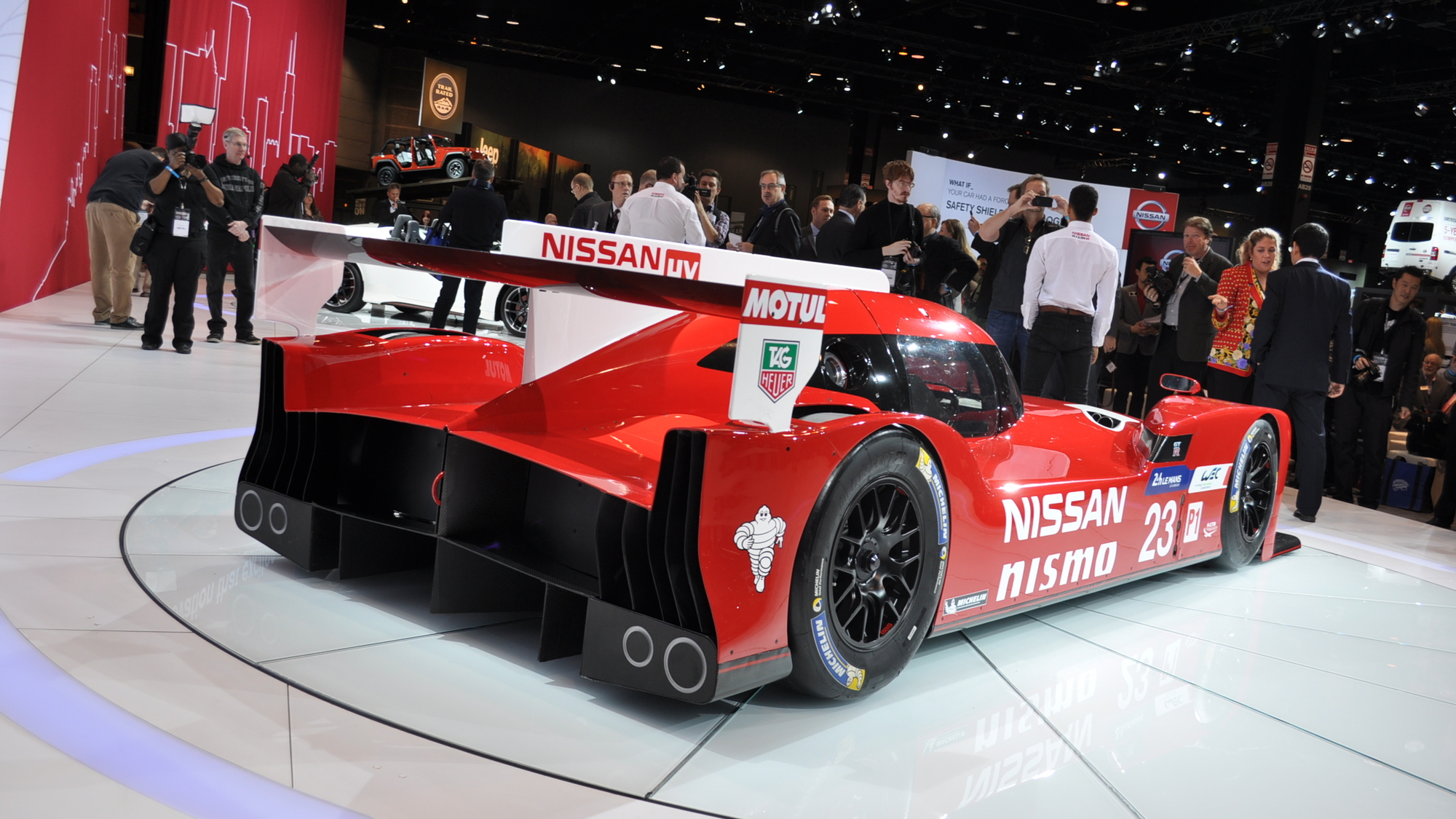 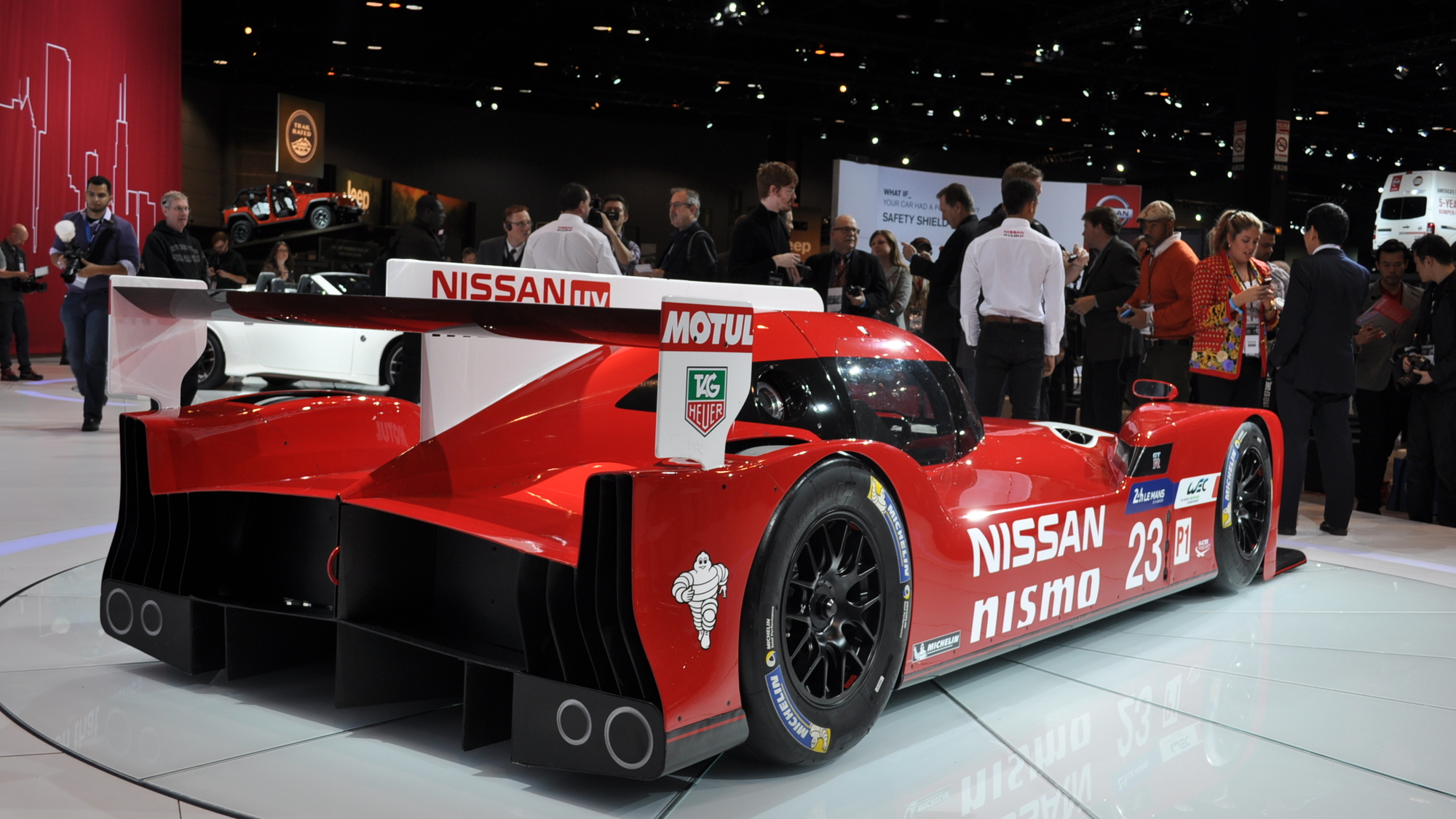 51
photos
Nissan’s new LMP1 hybrid race car set for the 2015 World Endurance Championship, which includes the prestigious 24 Hours of Le Mans, was revealed during yesterday’s Super Bowl XLIX in which the New England Patriots defeated the Seattle Seahawks 28–24. The new race car, whose official title is GT-R LM NISMO, was revealed in a 90-second spot in which Nissan also briefly showed its yet-to-be-announced 2016 Maxima.

We’ll get to the Maxima a bit later because what we’re really interested in is the new GT-R LM NISMO, Nissan's first top-level endurance racer since 1999’s R391. The car will be competing this year in the WEC's premier LMP1 category for hybrids, in which Audi, Porsche and Toyota are all set to return. Toyota is the reigning world champion.

Unlike its rivals, however, Nissan has a somewhat radical design for its LMP1. In a bold move, the Japanese automaker together with its technological partners have built a front-engined, front-wheel-drive racer powered by a twin-turbocharged 3.0-liter V-6 working in conjunction with an electric drive system to develop more than 1,250 horsepower! To ensure it gets the power down, the car features bigger tires up front: 14-inch wide front versus 9-inch rear. And with the engine up front, it means the cabin sits further back compared to the other LMP1s.

In line with the regulations, Nissan was able to utilize virtually any engine in its new LMP1 but had to ensure it met fuel flow limits. Teams are limited by how many grams of fuel per second can be burned, so the more efficient they make the engine, the more power they have because they’re all burning the same amount of fuel.

Under braking, kinetic energy is converted to electricity via an energy recovery system and stored, either in a battery or capacitor, whereby it can be used later, such as when exiting a corner. The key is to store the energy and then release it very quickly, and that's what makes Nissan’s system very competitive, according to the automaker. What’s not clear is whether this boost is sent to the rear wheels or the front wheels or all four.

Nissan describes the GT-R LM NISMO as the “ultimate GT-R”  so it possibly hints at elements we may see in the next-generation GT-R road car, the R36 (the two cars are being developed together). Hopefully we get more details on the road car soon.

“Le Mans drives innovation, so success on the track will lead to greater innovation in our road car range.” Nissan marketing chief Roel de Vries said during an official reveal event. “The GT-R is our flagship road car; this, the ultimate GT-R, continues a sporting bloodline that goes back three decades with NISMO, the motorsport and performance arm of Nissan.”

Nissan's WEC team has a base in the U.S. and has taken advantage of track facilities in the warmer southern states’ climate to test the new GTR LM NISMO during the winter off-season, with much of the action taking place in Arizona and Texas. Nissan will now continue its extensive test program ahead of the start of the 2015 WEC at the Silverstone race track in the U.K. on April 12. A full driver lineup will be announced later this year but right now we know that Spanish driver Marc Gene (see video below), a previous winner at Le Mans, will be part of the squad.

As mentioned above, we also saw the new Maxima in Nissan’s Super Bowl spot, titled With Dad and portraying the story of a family struggling with their dad, a Nissan racing driver, being away too much. As expected, the new Maxima looks very much like last year’s Sport Sedan Concept. It’s due out later this year as a 2016 model.

You can see some of the other spots that aired during yesterday’s Big Game at this link.