Drivers of a certain age will most likely associate Volvo with its boxy wagons of the 1980s and 1990s. But its earlier cars were anything but boxy, and one that used curves to great effect was the PV444 of 1944. Launched on September 1 of that year, the PV444 celebrates its 70th anniversary next week, and remains one of Volvo's most significant models to date.

The car might have actually debuted four years earlier, but the outbreak of the Second World War meant Volvo produced virtually no civilian vehicles during the conflict. Around 40 designers worked on the car's development, and prior to its debut a wooden model was constructed. With a coat of black paint and silver patches representing windows, it was far from a running prototype—but even so, it impressed Volvo's founders Assar Gabrielsson and Gustaf Larson. They gave the go-ahead for the PV444 to be built. 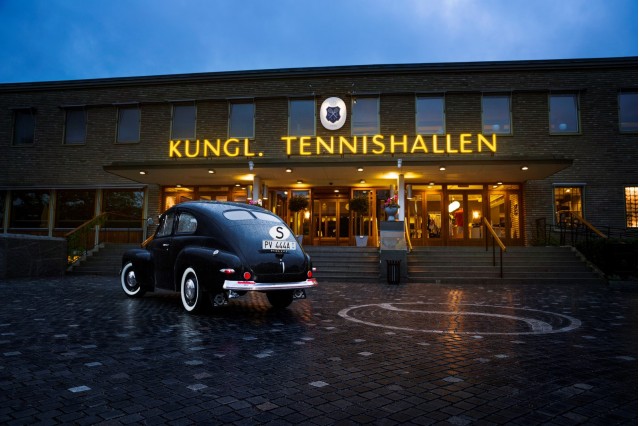 For its time, the car was relatively advanced. It was the first Volvo to use a monocoque body, and used an all-new 1.4-liter overhead-valve four-cylinder engine. This developed a modest 40 horsepower, but performance was less a priority than the car's practicality. All the first-generation cars featured a coat of black paint and a light green shade inside the cabin. On September 1, 1944, the car was shown to visitors at the all-new Royal Tennis Hall in Stockholm, as an indication of what the public could expect when the war finished. Dubbed 'Volvo's doves of peace' by Volvo's customer magazine, Ratten, they nevertheless made a strong impression—particularly as visitors included the country's prime minister and several princes of the royal family.

It would be February 3, 1947 before the car was finally signed off, and production started the next month. Volvo expected to sell only 8,000 PV444s—itself a high estimate given that Volvo had never built more than 2,000 vehicles previously—but over the course of the first-generation car's 11-year production run, almost 200,000 were built. Hugely contributory to that success was America. In August 1955, the first PV444s hit U.S. shores in Los Angeles. In just a year, Volvo became the second-biggest import brand in California. In total, 440,000 PV444 and updated PV544 models were sold—and Volvo's reputation was cemented forever.