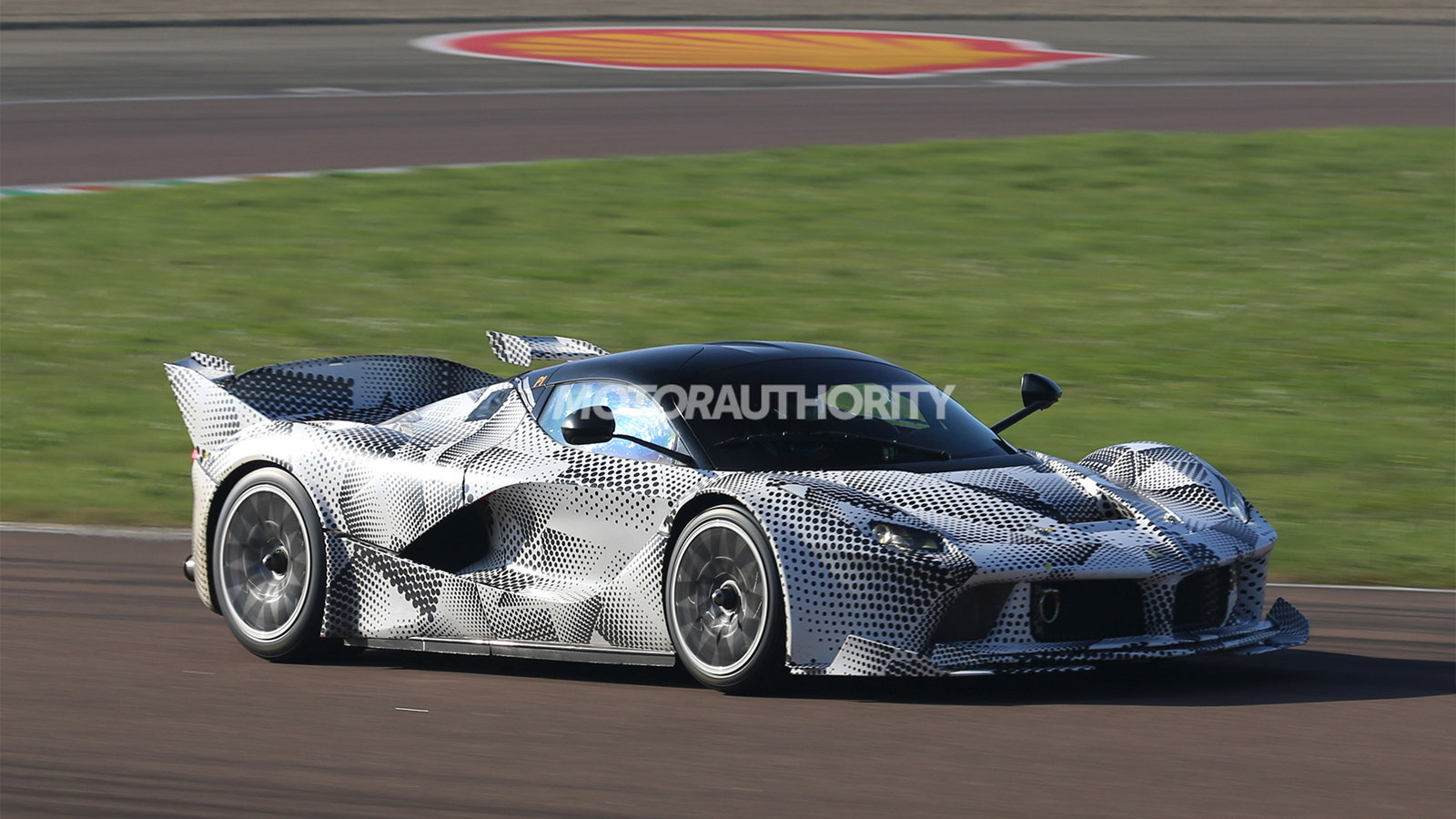 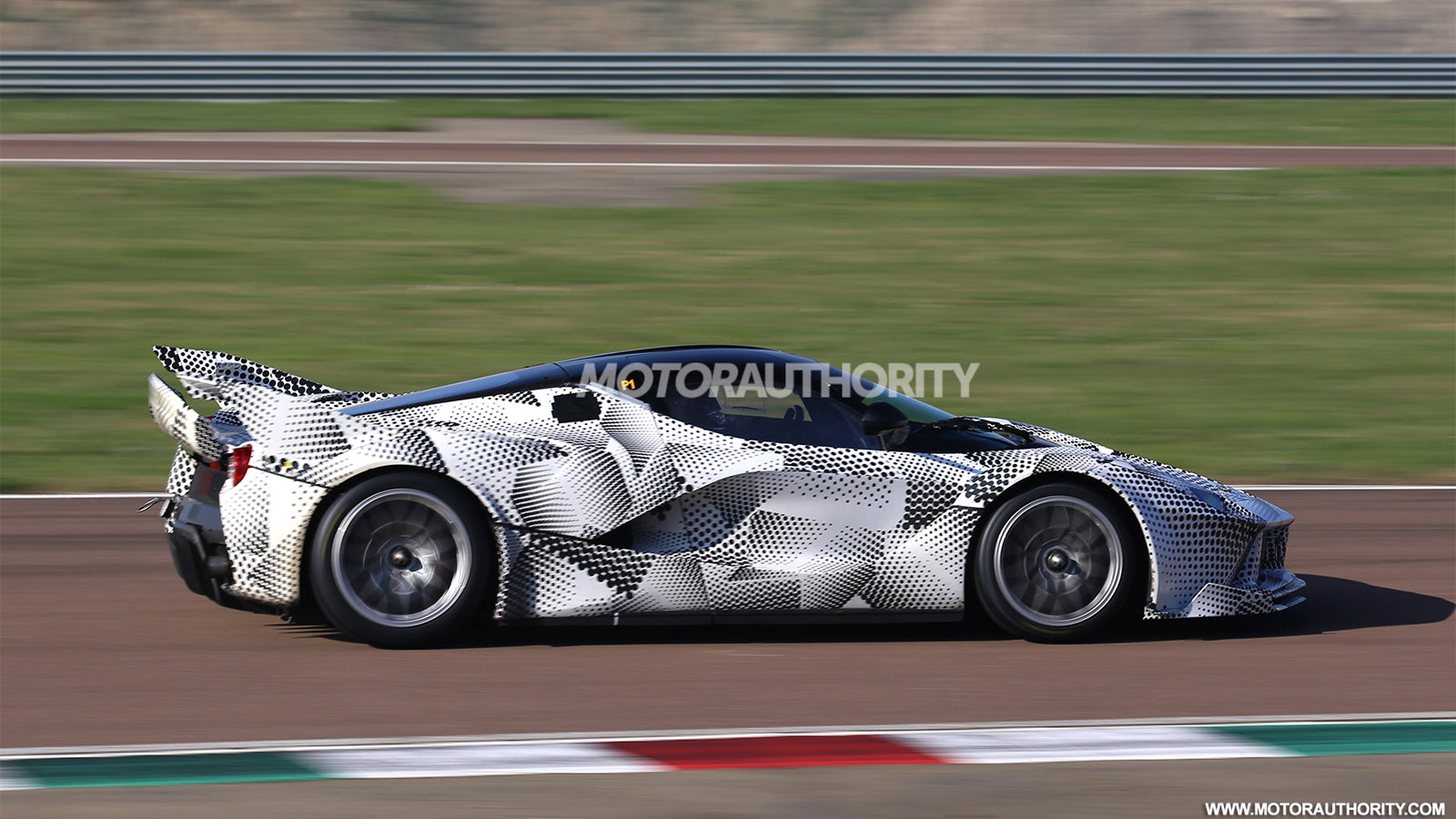 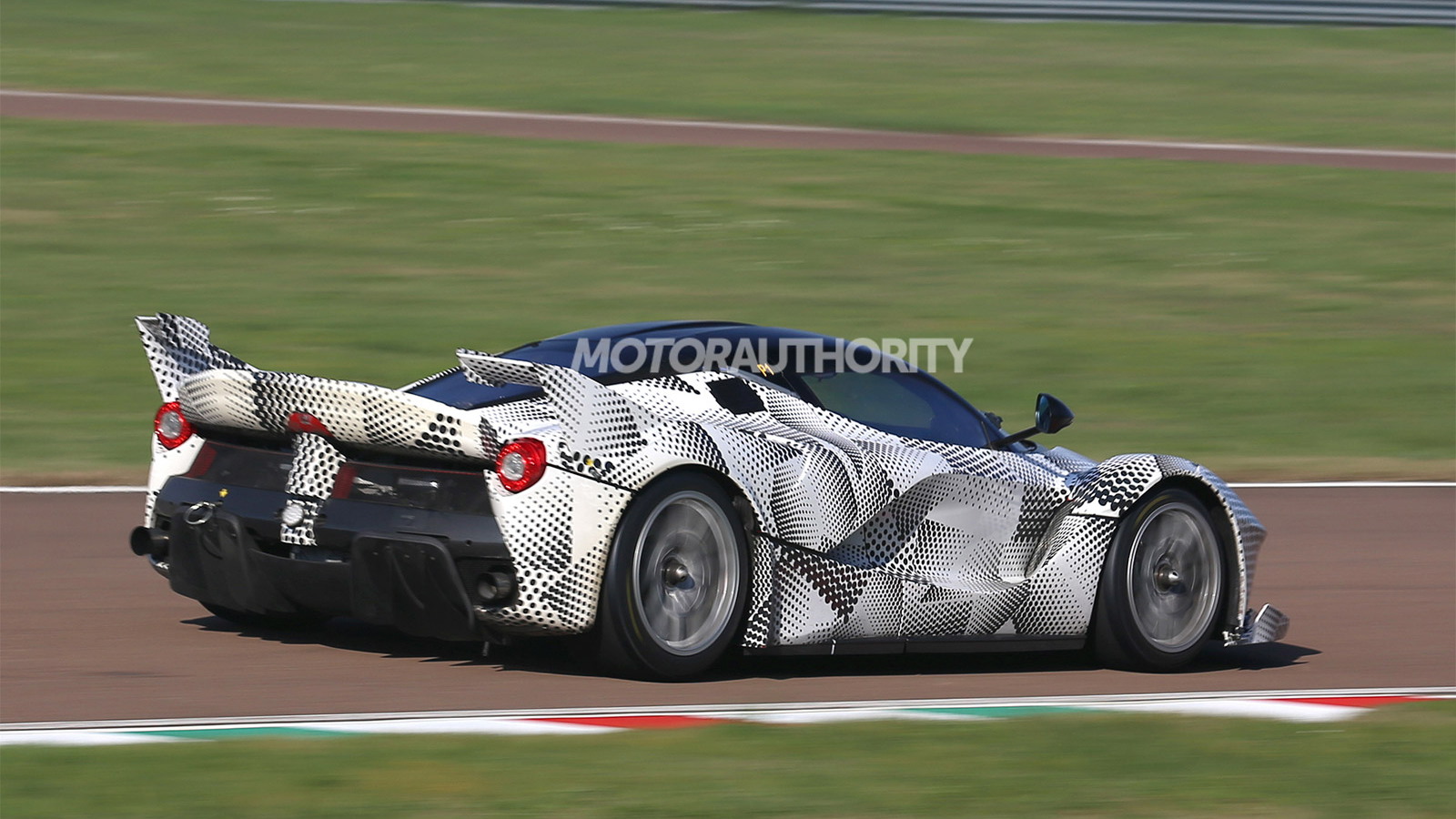 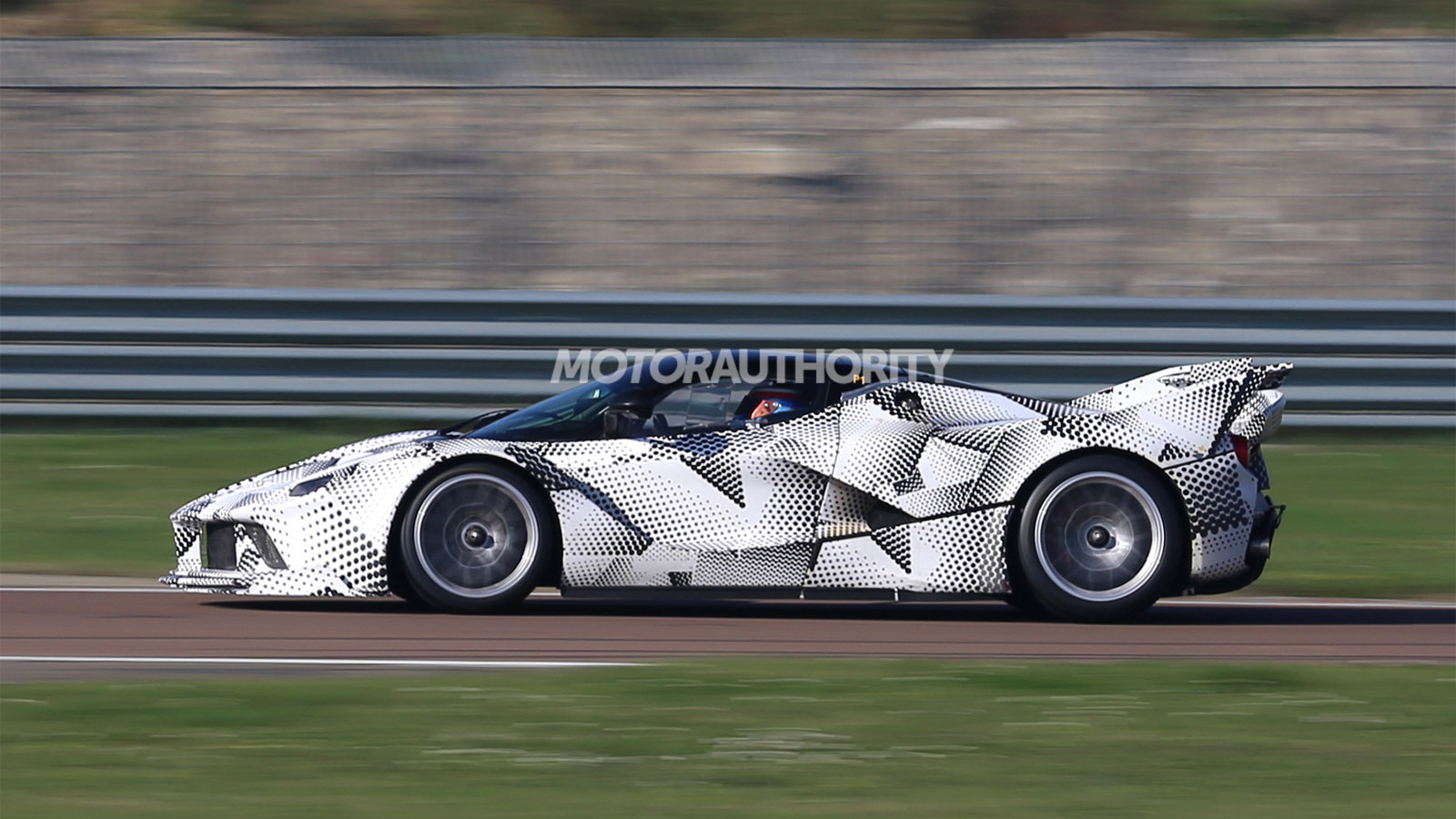 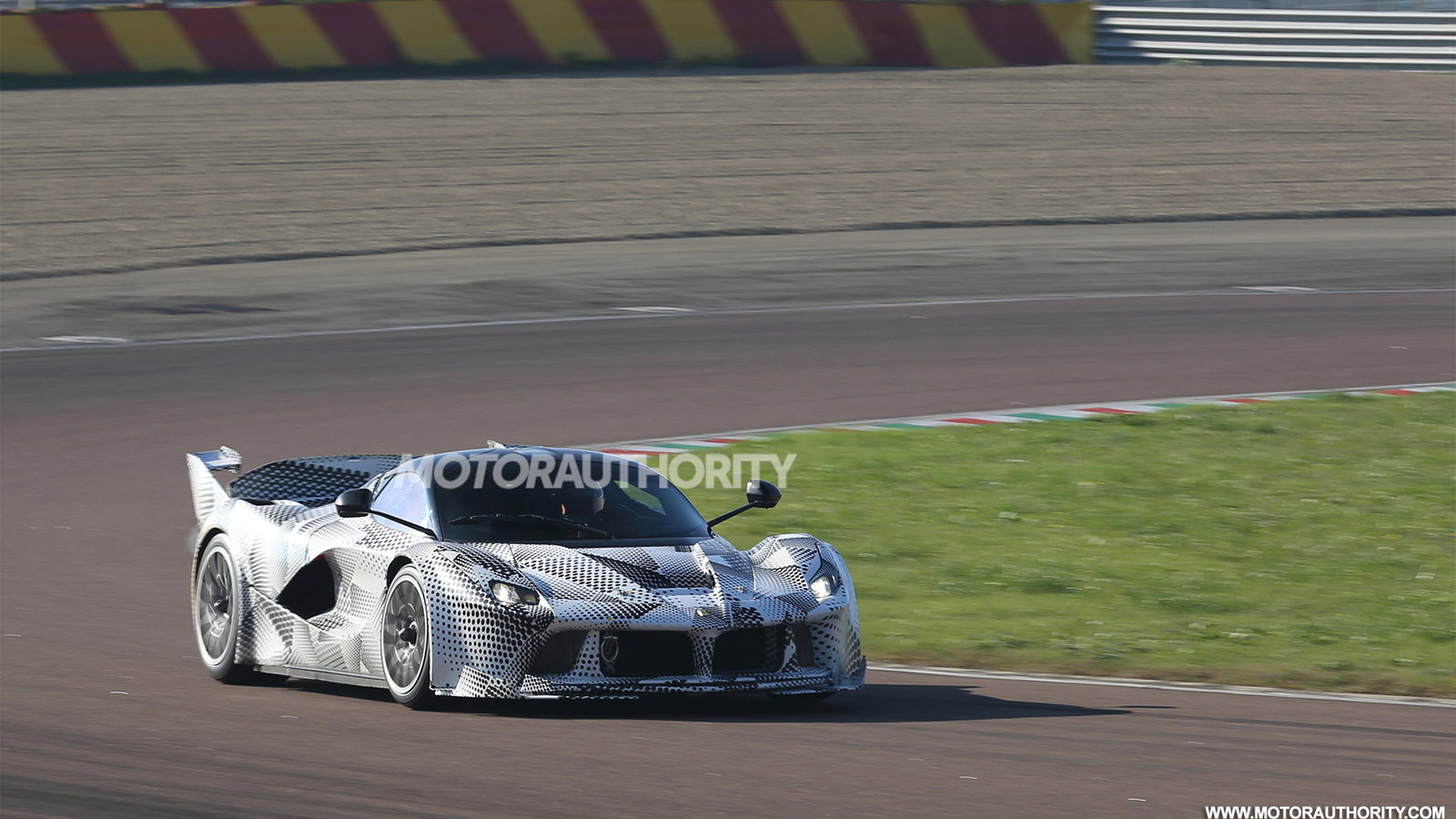 26
photos
Earlier in the year a Ferrari exec confirmed that development had started on an ‘XX’ experimental version of the LaFerrari supercar, and soon after prototypes of the track-only special were spotted at some of Europe’s top race tracks, including Germany’s Nürburgring where onlookers said it needed just 6:35 for a single lap. Now, a more advanced prototype has been spotted testing at Ferrari’s Fiorano circuit and is likely to be wearing the modifications destined for the final version.

This is because the LaFerrari XX (name yet to be confirmed) is due to be revealed very soon, possibly as early as the Finali Mondiali event taking place at Abu Dhabi’s Yas Marina circuit from December 3-6. The event is Ferrari’s annual celebration of the end of the motorsport season and brings together all of its separate sporting divisions, including the XX program.

The latest prototype is heavily camouflaged but we can see that it has been made even wider at the front than the standard LaFerrari. There is also a new splitter up front and at the rear we can see a pair of fixed spoilers, one at either side of the car. This is in addition to the standard LaFerrari’s rear wing. The rear diffuser has also been modified and a pair of exhaust tips fitted instead of the regular quad-pipe design.

The LaFerrari XX is expected to benefit from the same 6.3-liter V-12 and twin motor-generator HY-KERS hybrid setup from the standard LaFerrari, but with output turned up to around 1,050 horsepower instead of 950 hp. By comparison, McLaren’s rival to the LaFerrari XX, the P1 GTR, packs a 986-hp punch.

The extra power is said to have come from further fine-tuning of the V-12. A previous spy video of the LaFerrari XX revealed a much more aggressive engine note than that of the standard car. But more power is only part of the story as Ferrari is more focused on the handling of the car. Look for the LaFerrari XX to benefit from some weight-saving measures, improved aerodynamics (confirmed by the latest shots), slick tires, new suspension, and revised electronic stability and traction systems.

While the LaFerrari is being produced in a limited run of 499 cars, all of which have been sold, the LaFerrari XX will likely add a couple of dozen units to that tally. The XX cars are typically kept and maintained by Ferrari, with owners flying in to various race tracks around the world to drive the cars on the track and provide feedback to engineers working on the next generation of Ferrari road cars.

The XX cars fall under Ferrari’s Corse Clienti customer racing program and are offered exclusively to the brand’s most loyal customers, although it’s not unusual to find XX cars for sale on the used car market. As the cars are all designed for track-use only, it means they can’t be registered for the road.