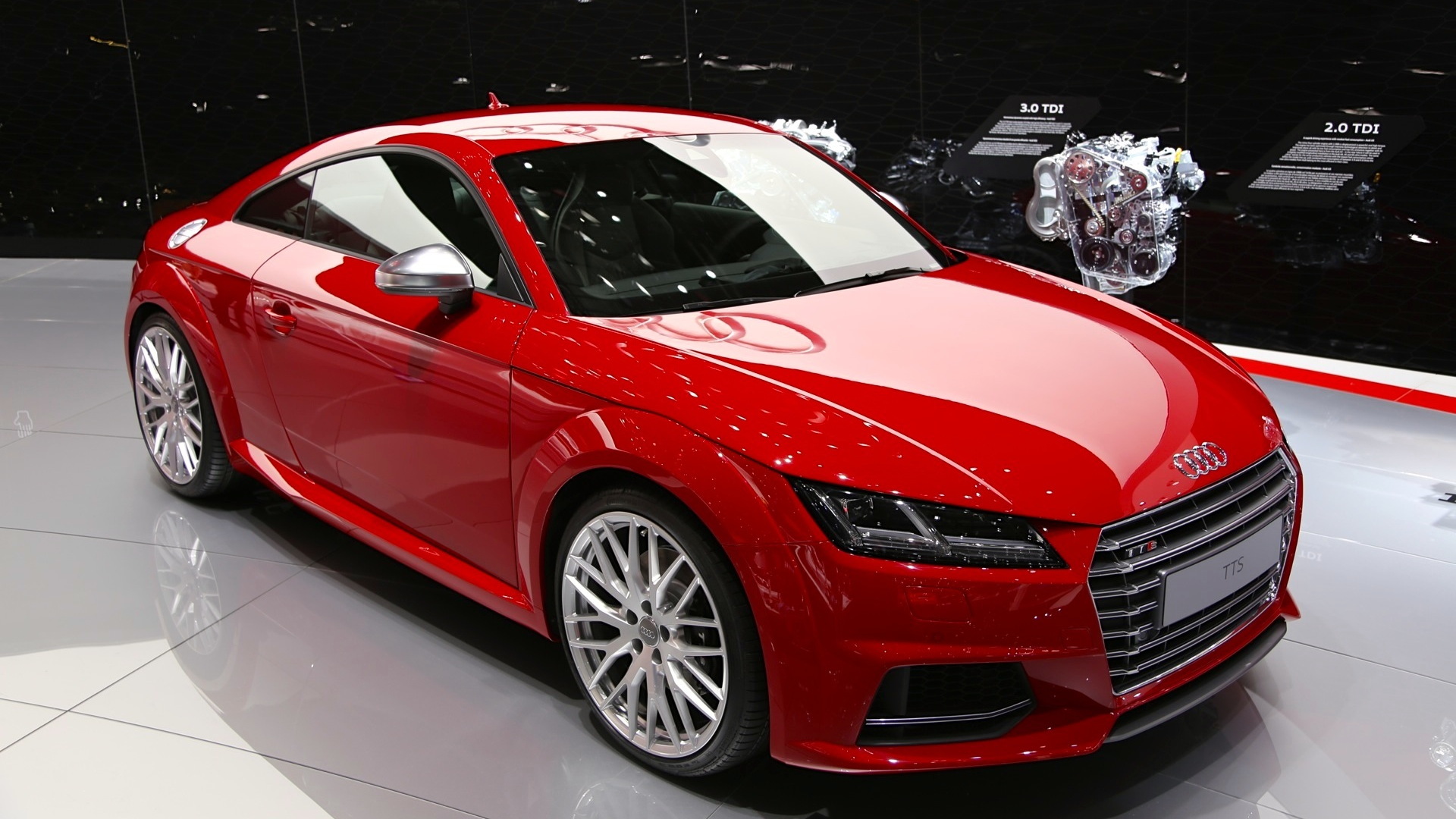 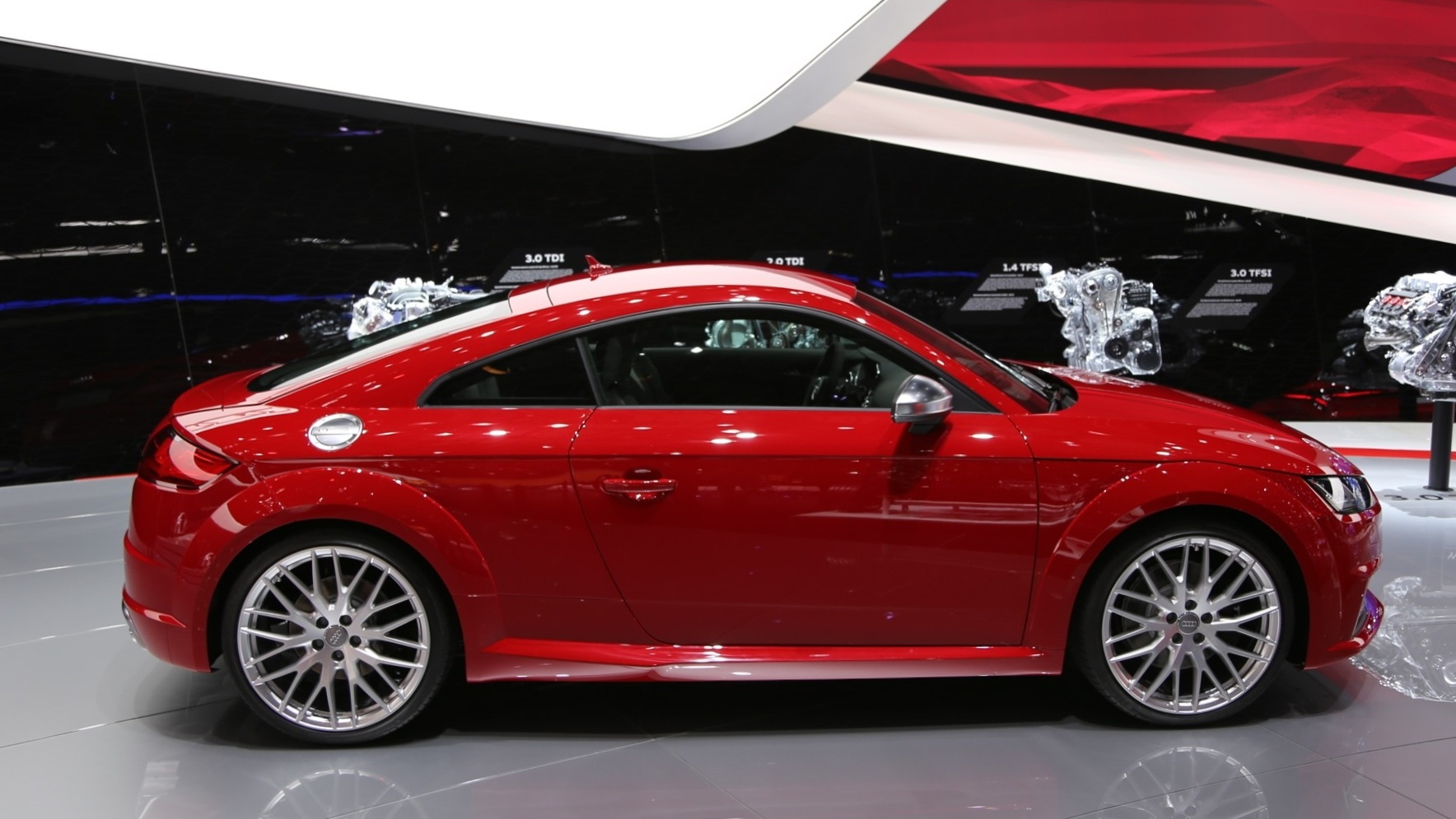 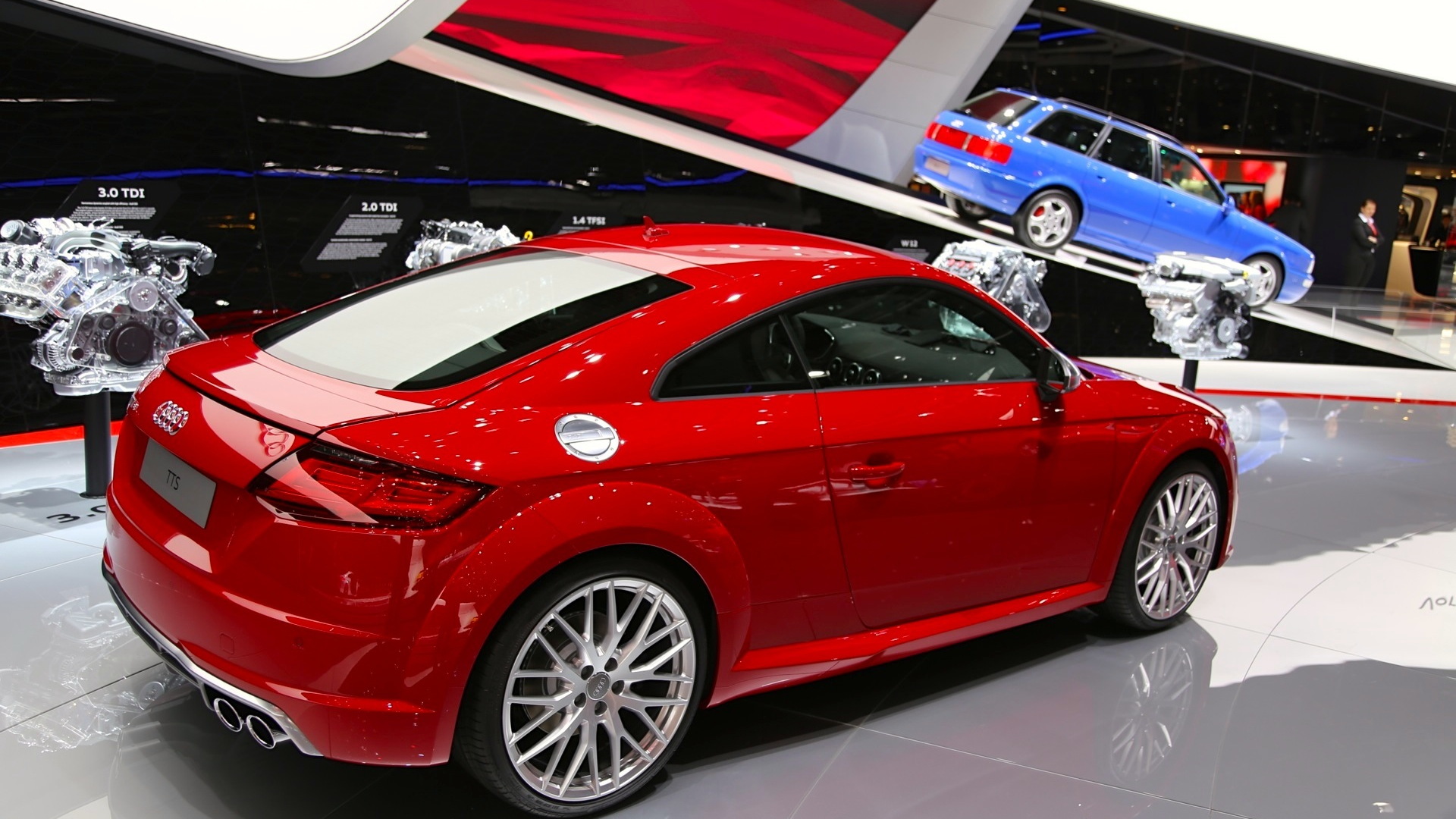 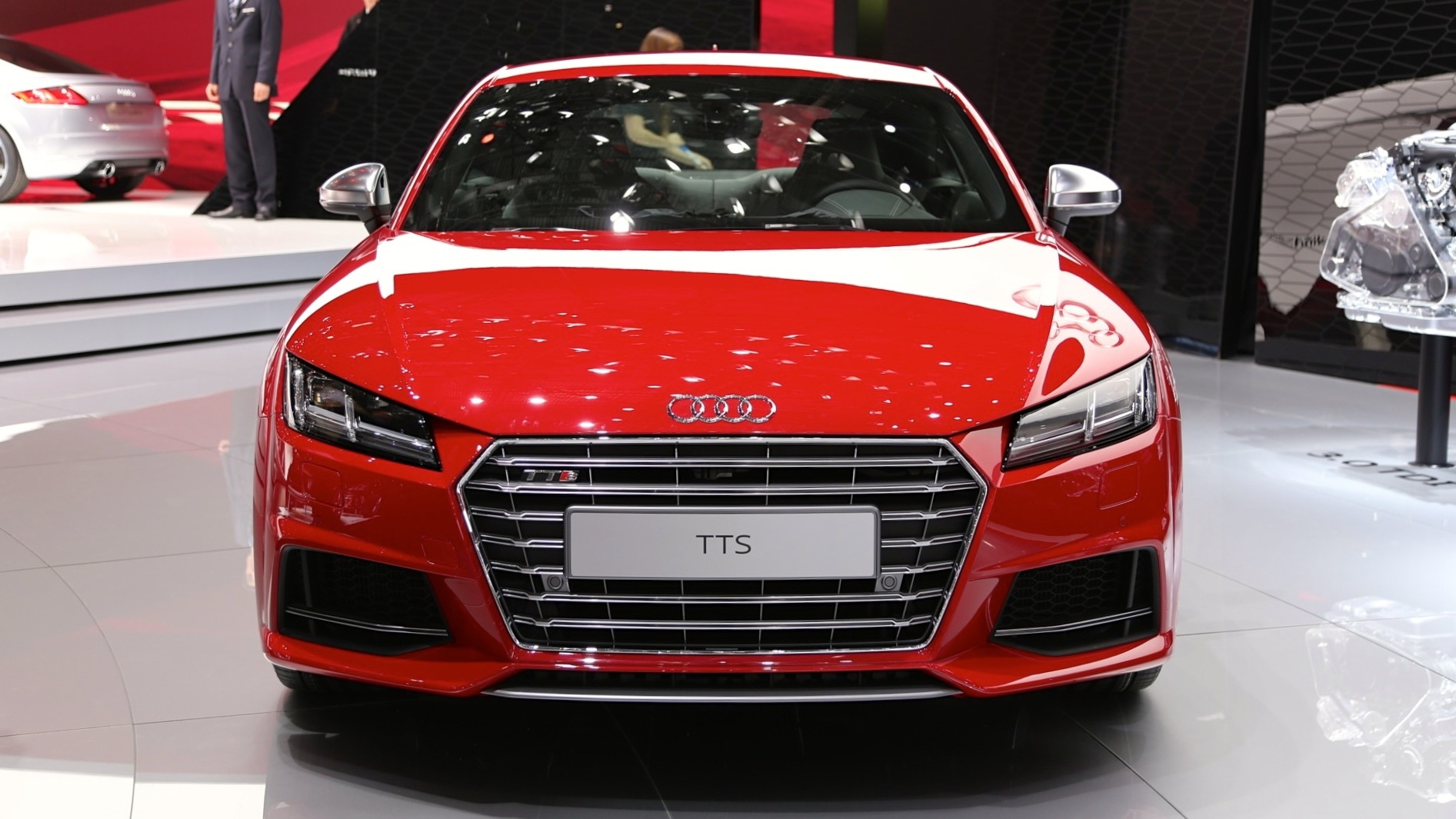 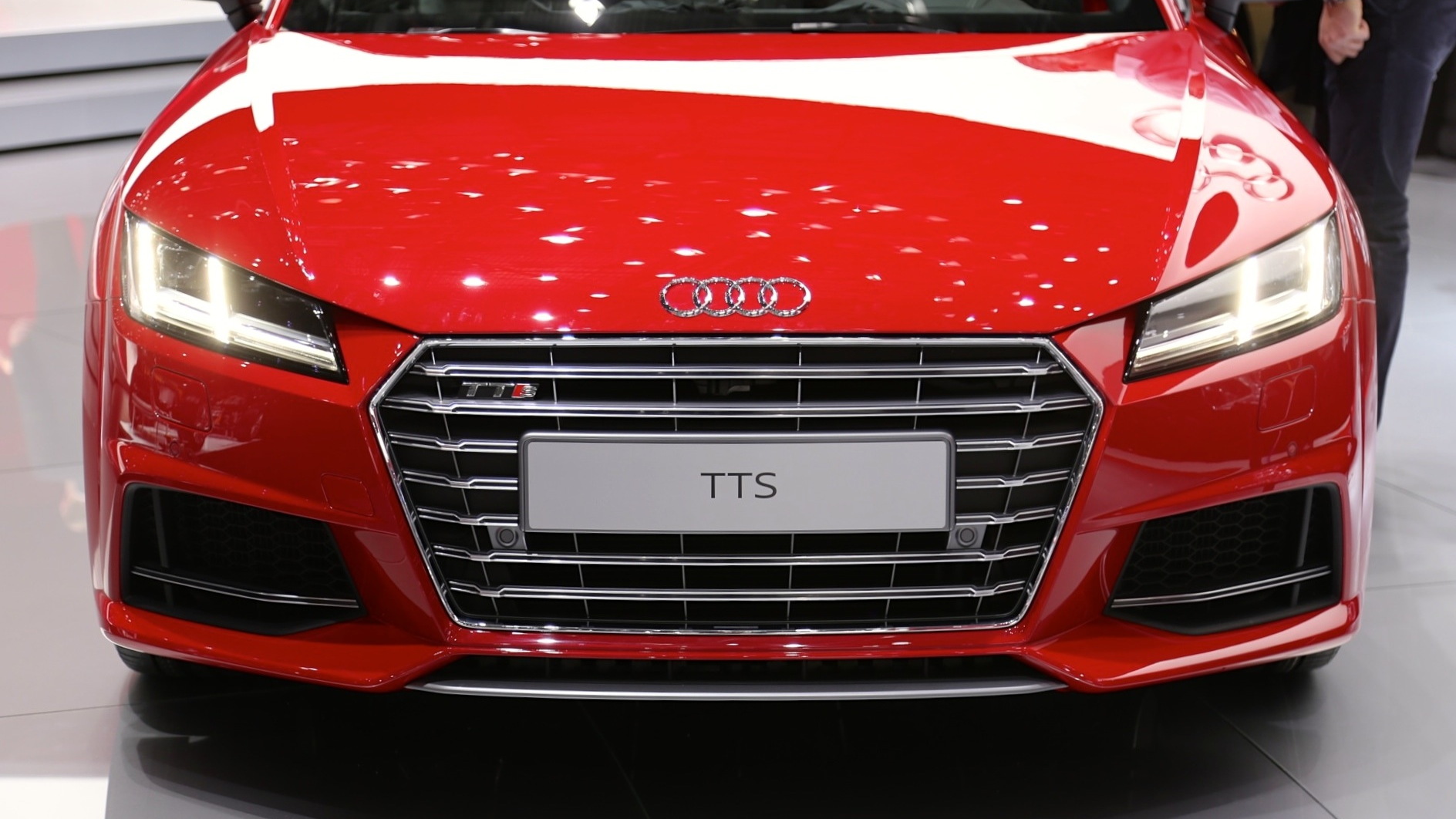 20
photos
Audi’s third-generation TT is finally here, blending lines from the iconic original with those of the sportier second-generation model. The new car will go on sale in the U.S. early next year, as a 2016 model, initially in TT and TTS trim.

The front of the new TT is dominated by horizontal lines. The single-frame grille is much broader and flatter than that of the previous model, with a single line crossing it. On the TTS, the grille is even more pronounced thanks to a shiny finish for the slats. There are also two large intakes on the TTS that give it an aggressive look similar to that of the outgoing TT RS model.

At the rear, horizontal lines give the car a wide and planted look. An automatic rear spoiler is standard, rising at speeds above 75 mph, and also fitted to the cars is an integrated rear diffuser. Like all Audi S models, the TTS exhales through four oval tailpipes while the regular TT gets a pair of pipes.

The 2016 TT stretches 13.7 feet in length, which makes it the same size as its predecessor. However, the wheelbase has grown by 1.46 inches to 8.2 feet. One new characteristic is the available LED elements for both the head and tail-lights (xenon headlights remain standard). On overseas models, Audi will also be offering its Matrix LED headlight technology that allows the high-beam light path to be controlled using 12 individual LEDs.

While the exterior of the car hasn’t changed much, the cabin design has dramatically. The highlight is the new ‘virtual cockpit’ where all information, including infotainment as well as speedometer and tachometer details, is presented through a fully digital 12.3-inch display located behind the steering wheel. This replaces the need for a central MMI monitor, though the passenger can still get feedback on climate settings through a digital display located directly in the air vents.

A horizontal control panel is still located in the center column. It features 3D-designed toggle switches that activate the hazard warning lights, the Audi drive select performance enhancer and the assistance functions.

The standard sports seats in the new Audi TT have integrated head restraints and are positioned lower than those in the predecessor model, and are lighter too. As an option--and as standard in the TTS--there are newly developed S sport seats with highly contoured and pneumatically adjustable side sections that provide even better support for hard cornering. A 2+2 layout remains, but it’s near impossible to fit a regular-sized adult in the back.

Underpinning the car is the Volkswagen Group’s flexible MQB platform designed for small and medium cars. The structure of the 2016 TT features a mix of steel and aluminum. The curb weight of the lightest variant is just 2,711 pounds, which is about 110 pounds lighter than the outgoing model.

The front suspension is based on a McPherson design, while an independent four-link setup is used in the rear. One particular highlight is the new third generation of the adaptive magnetic ride damper control system, which is standard on the TTS and optional on the TT. Another highlight is the speed-sensitive steering. As it is an electronic system, it also allows for assistance features such as active lane assist and park assist.

Drive in the 2016 TT goes to the front wheels as standard, but quattro all-wheel drive is available and standard on the TTS model. In the U.S., a 2.0-liter TFSI engine will be common to both the TT and TTS. In the TT, the turbocharged and directed four-cylinder will pump out approximately 230 horsepower and 272 pound-feet of torque, while in the TTS it will be good for approximately 310 hp and 280 lb-ft of torque.

A manual is standard but a six-speed S tronic dual-clutch gearbox is available and comes with a launch control feature. Equipped with the latter, the TT will sprint from 0-62 mph in 6.0 seconds and reach a governed top speed of 155 mph. The TTS, meanwhile, needs just 5.3 seconds to reach 62 mph when equipped with the S tronic ‘box and also has a top speed governed to 155 mph.

The 2016 Audi TT makes its debut today at the 2014 Geneva Motor Show. For more from the show, head to our dedicated hub.