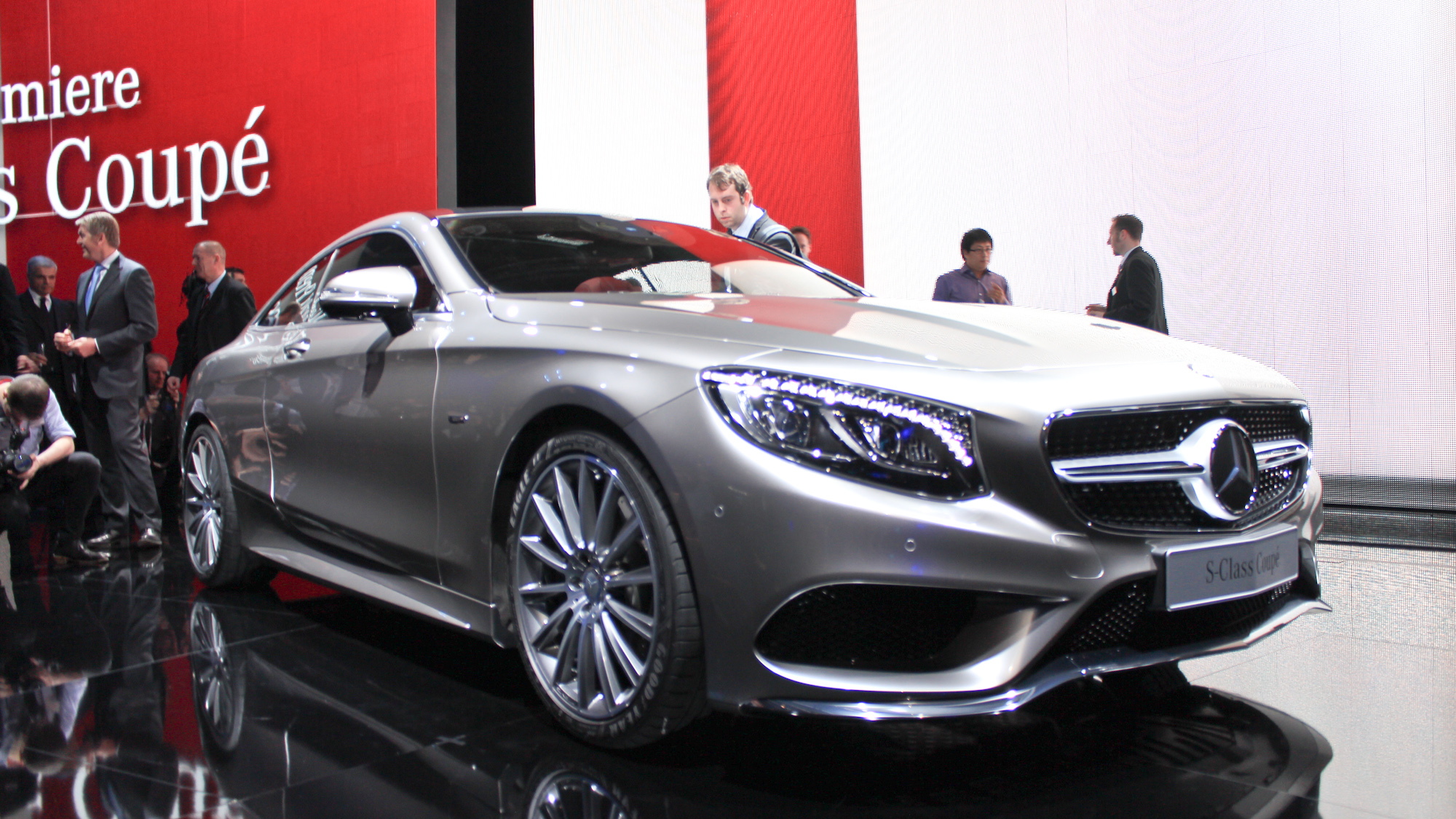 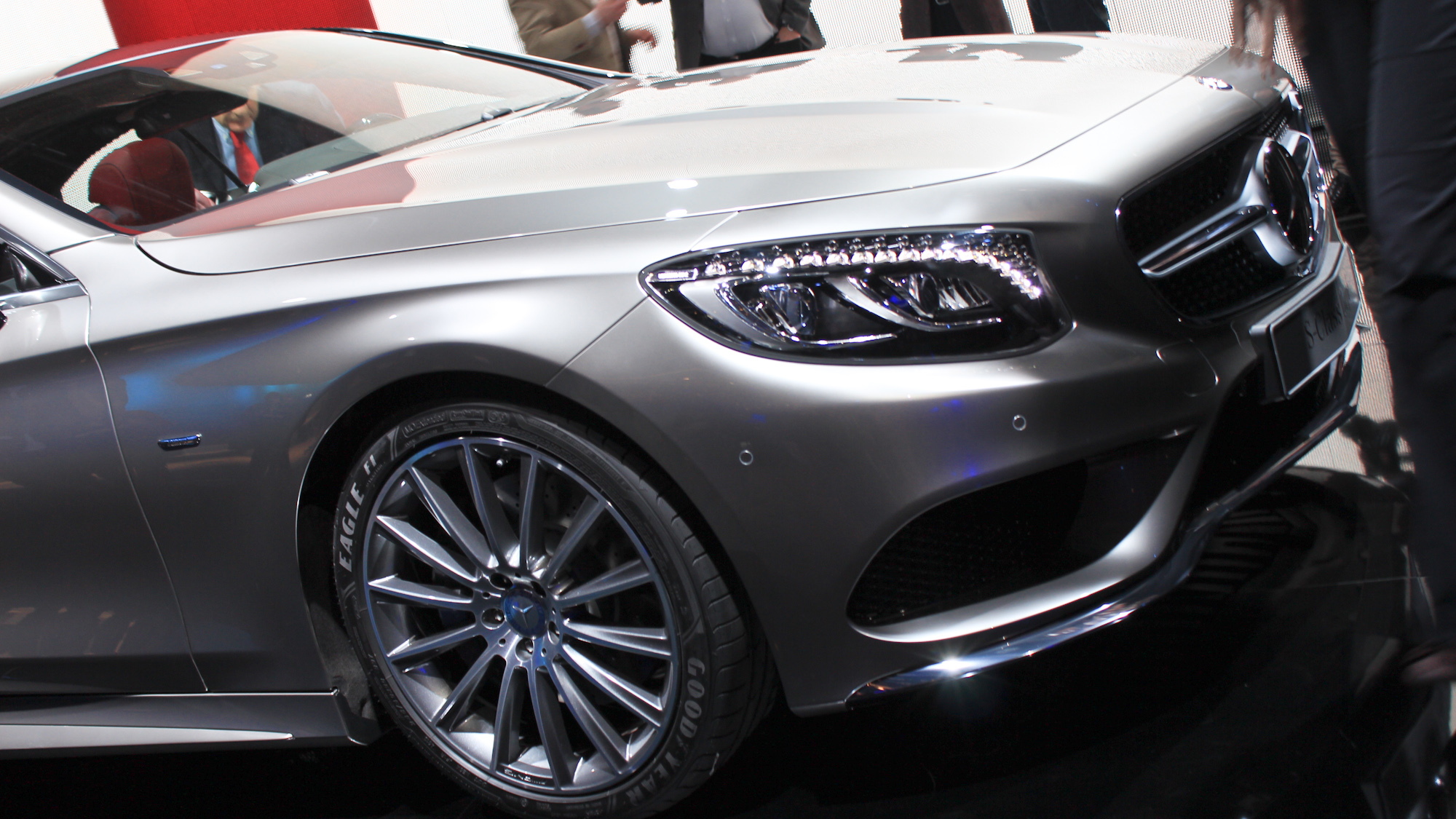 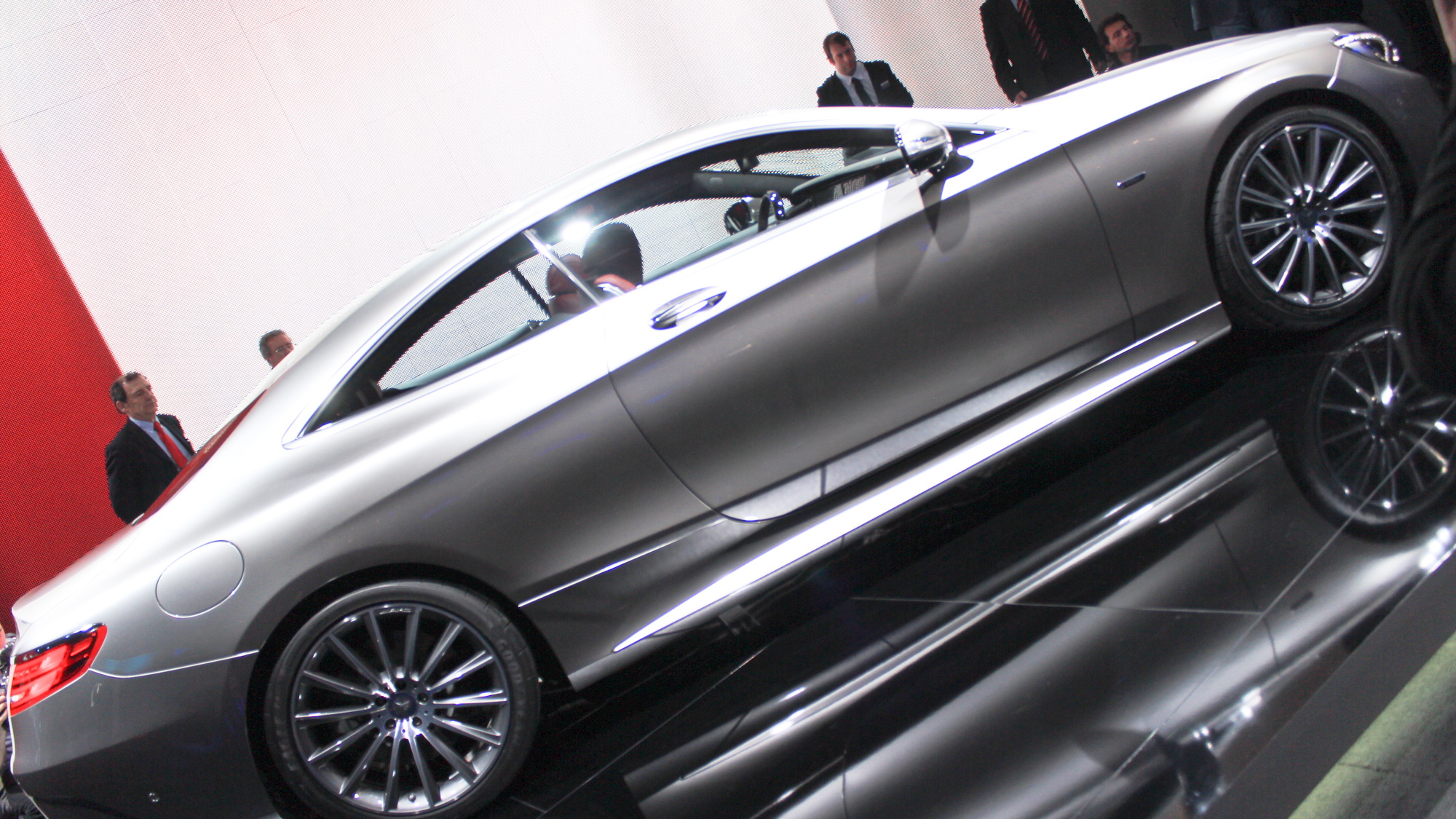 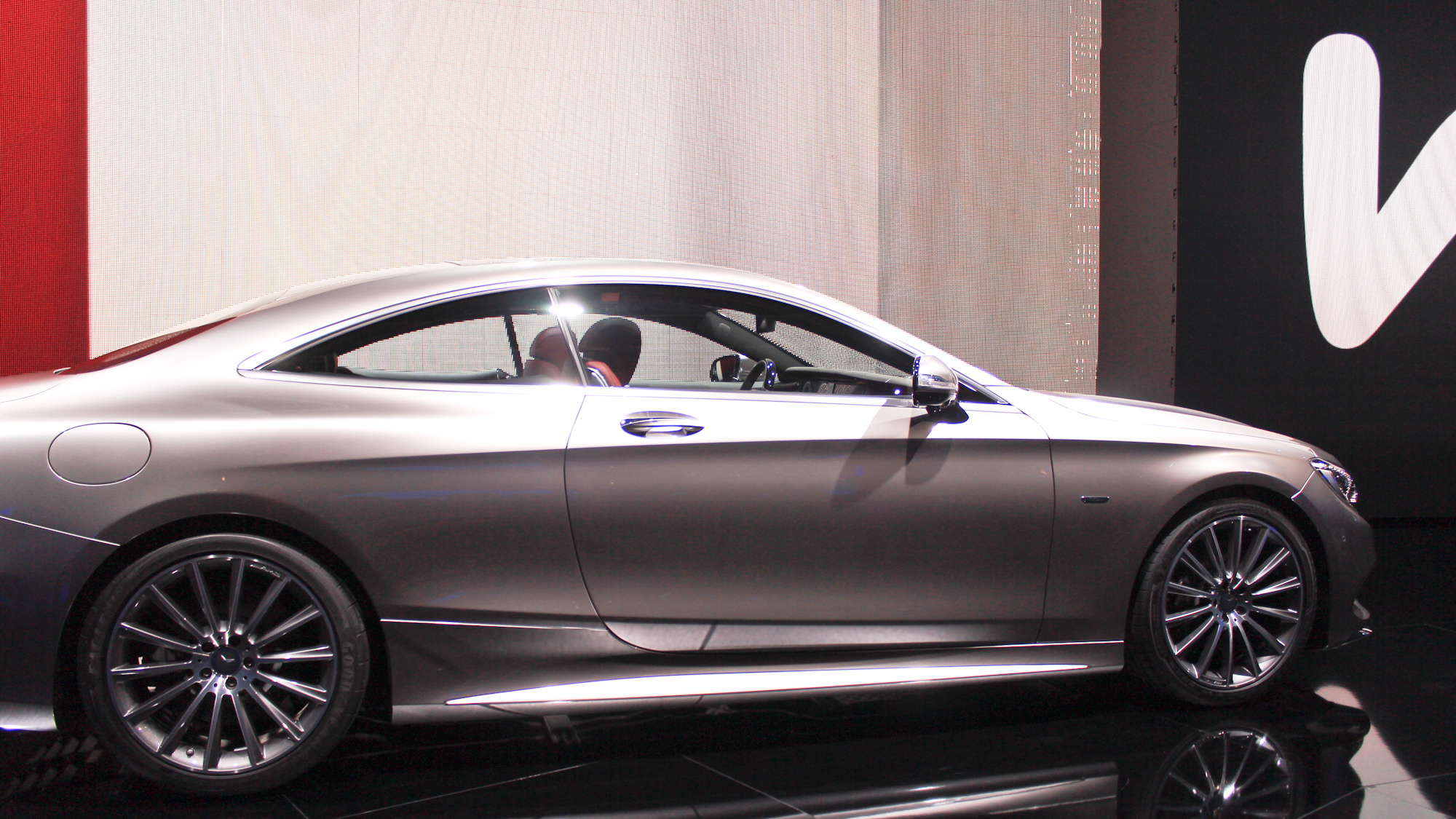 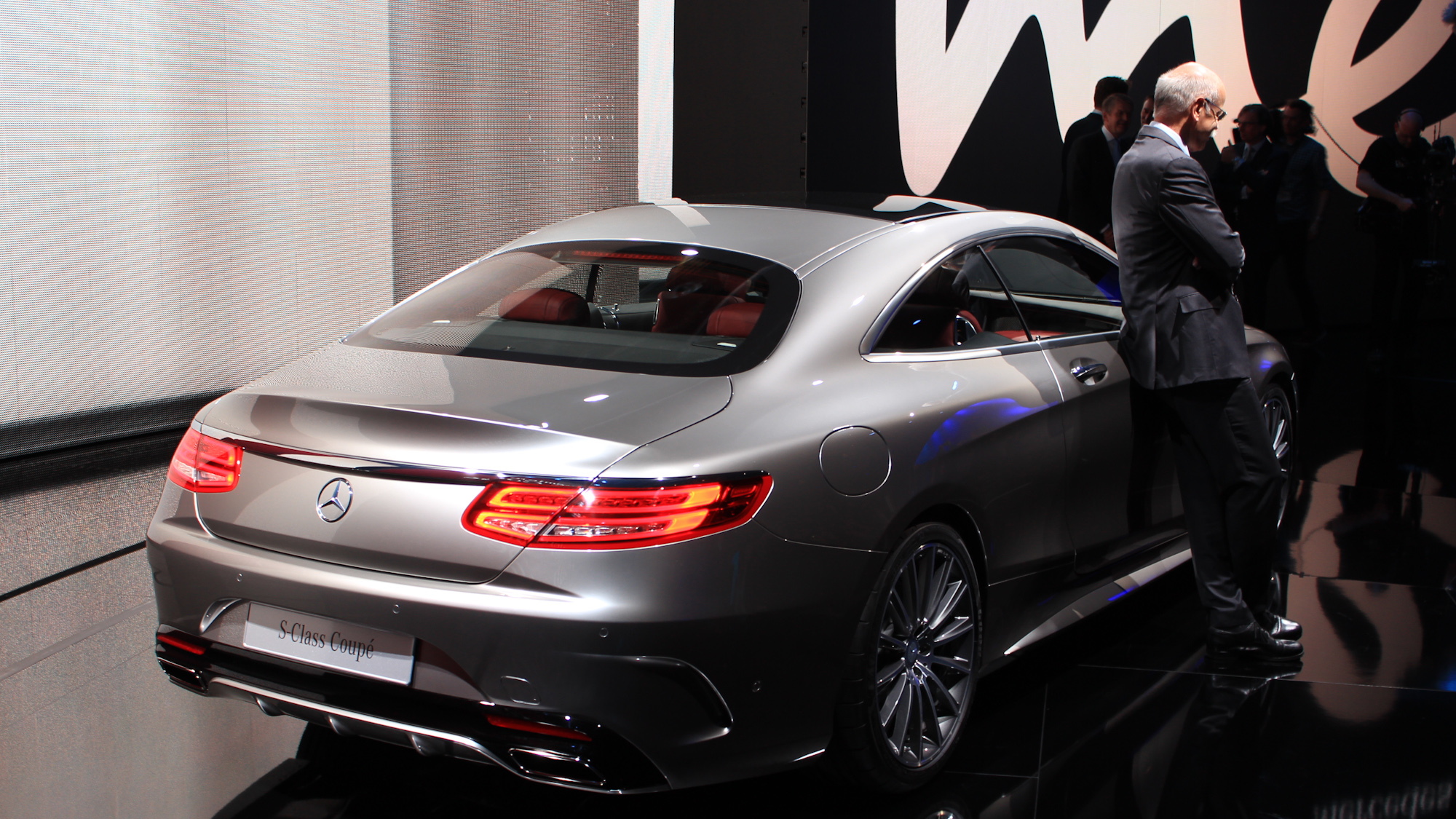 40
photos
The Mercedes-Benz S-Class sedan has already put the world on notice, from its standard stance on opulence in the S550 to the impeccably impressive S63 AMG super sedan. Now, the sedan gets a sleeker, sportier companion: the 2015 S-Class Coupe.

A striking profile marks the S-Class Coupe apart from the teeming hordes of four-doored coupe wannabes. This is a true coupe, and it wears its proportions like a larger-than-life sports car. At the nose, the details are familiar, with the more upright, broad-set grille, angular full-LED headlights, and large air inlets familiar to the sedan--but the Coupe puts a slimmer, lower twist on the look, giving the face of the two-door the athleticism you'd expect. Each of those headlights can optionally host 47 Swarovski crystals, as well--17 for the daytime running lights, and another 30 for the turn indicators.

Along the sides, the arching character lines seem crisper, dissolving into the wide haunches formed by the rear fenders. At the rear, a taut, horizontally-oriented design spreads the mass of the S-Class Coupe to speak of solidity and performance--factors only enhanced by the air extractors and diffuser along the lower portion of the bodywork.

Inside, it's more familiar still, with the core of the sedan's layout mapped to a trimmer form. The dash presents the same massive dual-LCD instrument panel/center display combination, but comes off lighter and more compact, while still offering the same array of equipment and features. The center console is kept simple, the button count low, with many of the controls located on the door panels, as the brand loves to do.

The majesty of the S-Class cabin really can't be understated. The seats are among the most comfortable places in the universe, wheeled or not; the feel and finish of each piece is substantial, elegant. We fully expect the S-Class Coupe to match the sedan in these respects.

But what, you ask, lives under the hood of this beautiful beast? At launch, for the U.S., the S550 Coupe is the only model, coming with Mercedes' 4.7-liter twin-turbocharged V-8 engine. Rated at 449 horsepower and 516 pound-feet of torque, it should provide suitably brisk performance, though Mercedes isn't so gauche as to list the tawdry statistics. All-wheel drive courtesy of Benz's 4Matic system will also be standard equipment for America, and while no transmission details have been announced, the seven-speed paddle-shifted automatic from the sedan is likely to get the call.

As with any S-Class, however, the experience is about more than just power and style. There's the lab full of equipment that's tucked behind the scenes, too.

Safety features like adaptive cruise control, cross-traffic alerts, active lane keeping, night vision, adaptive high beams, and collision prevention systems are all available, of course, just as you'll find on the sedan. These can do things like prevent or mitigate the effects of a collision by braking automatically at speeds up to 65 mph; prevent rear-end collisions at speeds up to 25 mph; and more.

A touchpad, mounted in the front of the center arm rest, is standard equipment, allowing tablet-like gesture inputs, finger-drawn letters, and other symbols to entered intuitively. The available head-up display puts a 480 by 240-pixel image in the driver's field of view across an eight-inch by three-inch area, relaying key navigation, vehicle, and safety information to a virtual position about six feet out over the hood. For the audiophiles, a pair of Burmester sound systems are available, including a surround-sound system and a 3D surround-sound system.

Avoiding all possibility of a cave-like cabin, the S-Class Coupe also offers a large 14-square-foot Magic Sky Control panoramic glass roof, which can vary its opacity at the touch of a button; at its darkest, a mere one percent of exterior light penetrates. A roller blind below the glass can completely block the light, as well.

Ride comfort should be fully suited to the S-Class badge as well, with Active Body Control offering adjustable, dynamic response to the road surface and the driver's inputs. Rather than the performance-oriented result we're likely to on the eventual AMG version of the Coupe, here, it's about comfort. Accordingly, the S-Class Coupe features an active ability to lean into the corner, a features Mercedes-Benz describes as "curve tilting." With three modes drawing on suspension movement, vehicle speed, and a stereo camera system, the car anticipates the curvature of the road ahead, leaning the car up to 2.5 degrees through a curve. The curve tilting system is active at speeds from 19 to 112 mph.

The 2015 Mercedes-Benz S-Class Coupe was unveiled to the world at the 2014 Geneva Motor Show and will arrive in the U.S. as the S550 4Matic this fall. Oh, and further down the track, a convertible version will be launched as will a high-performance AMG variant.