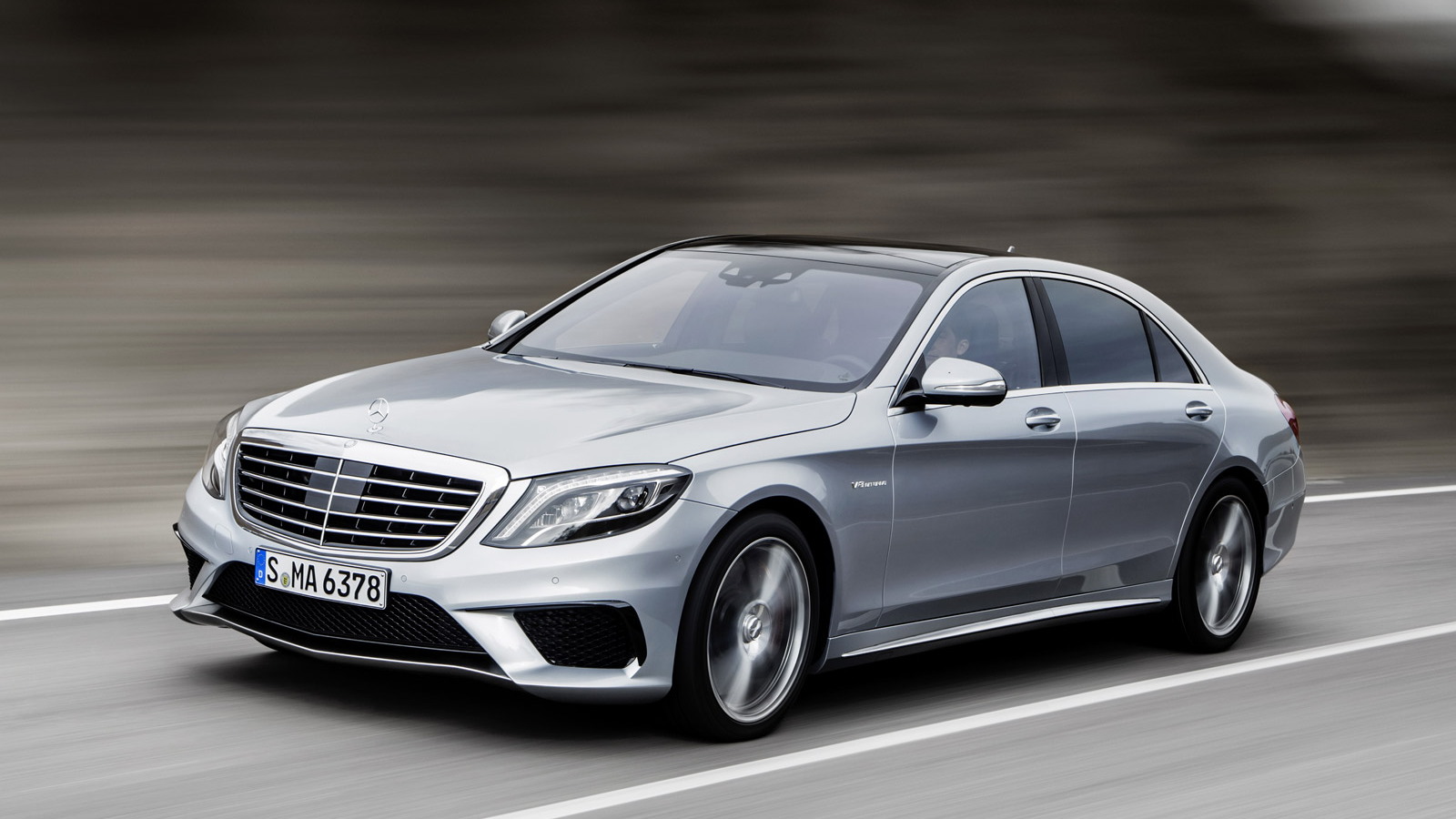 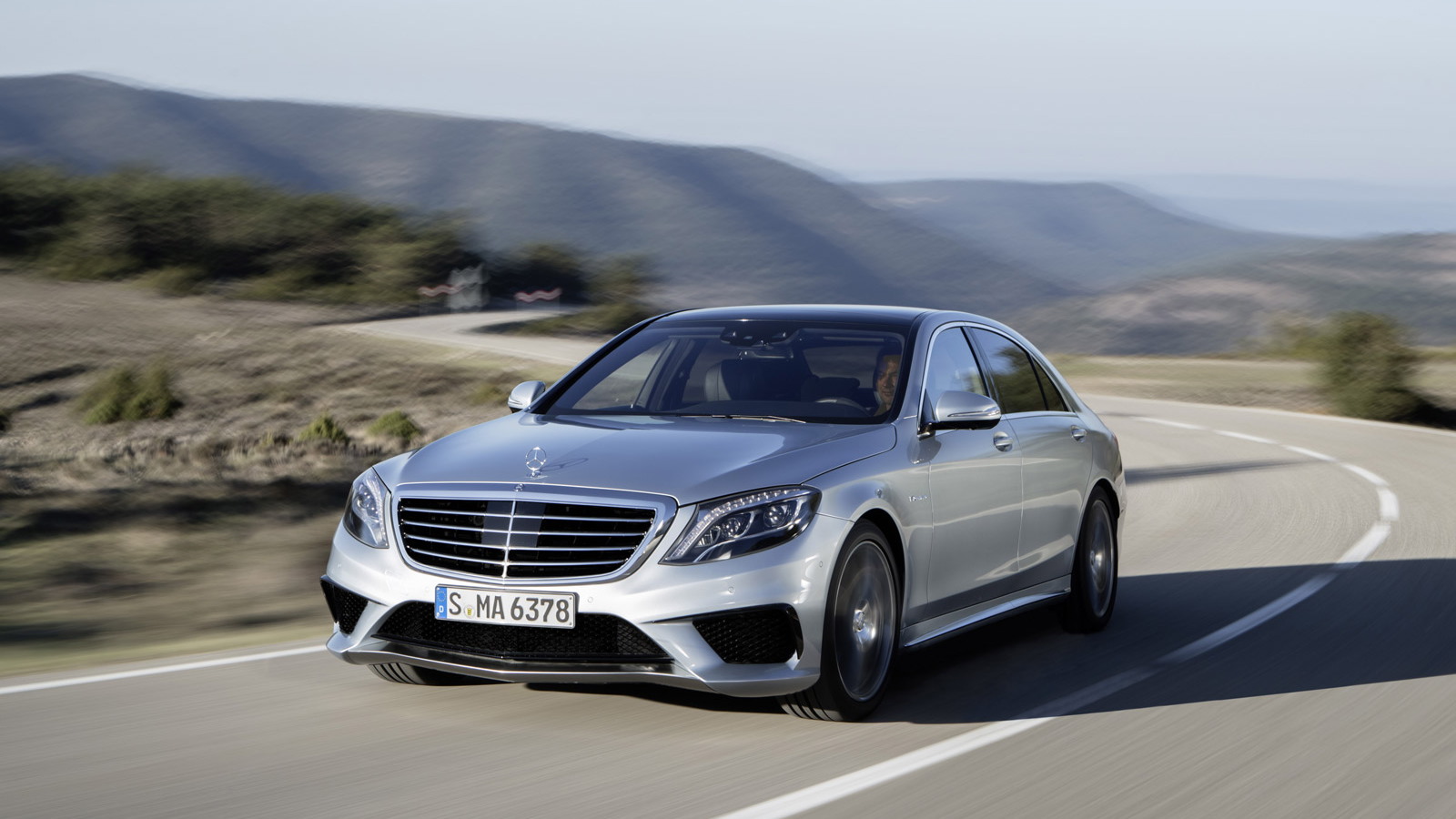 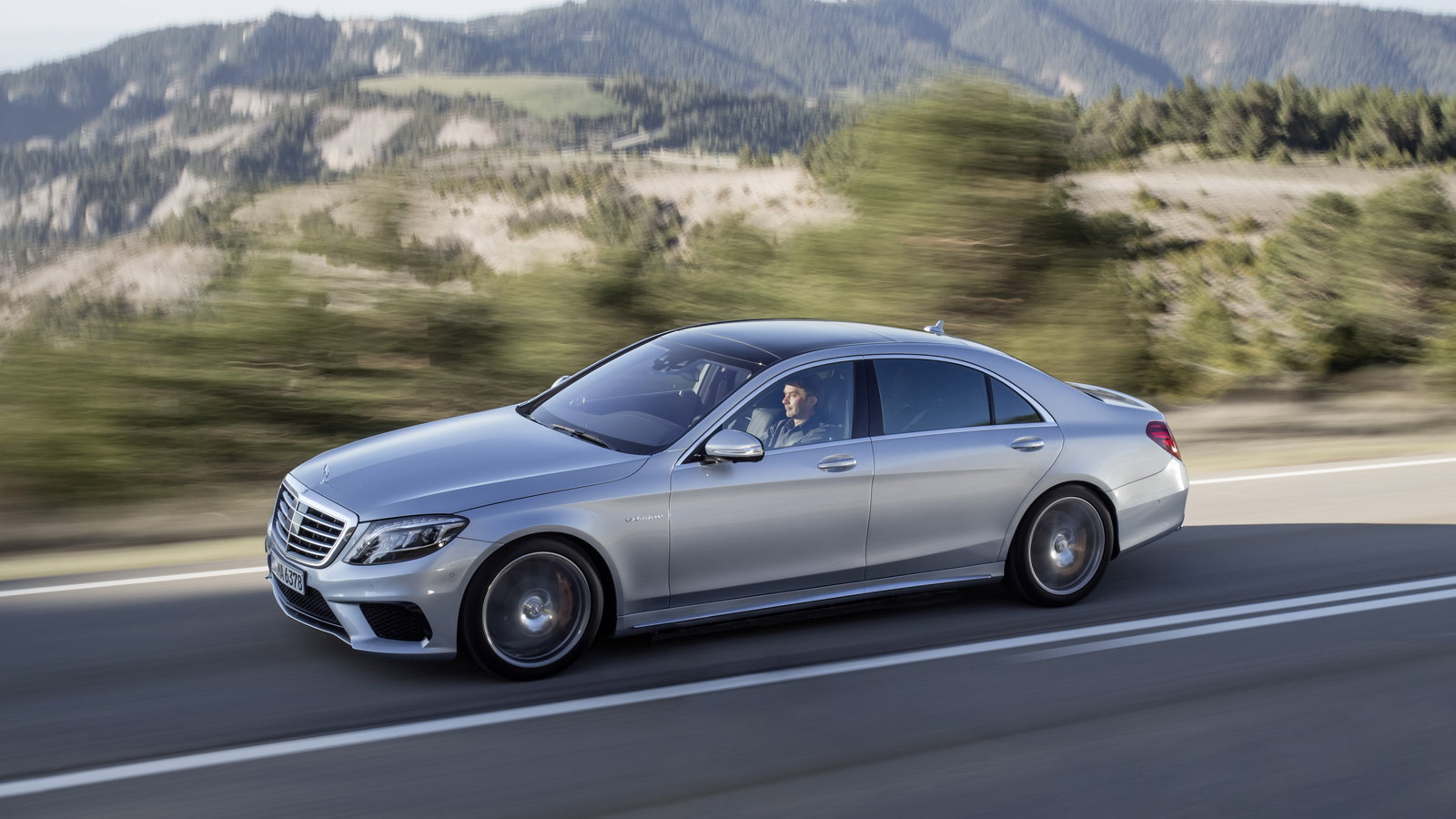 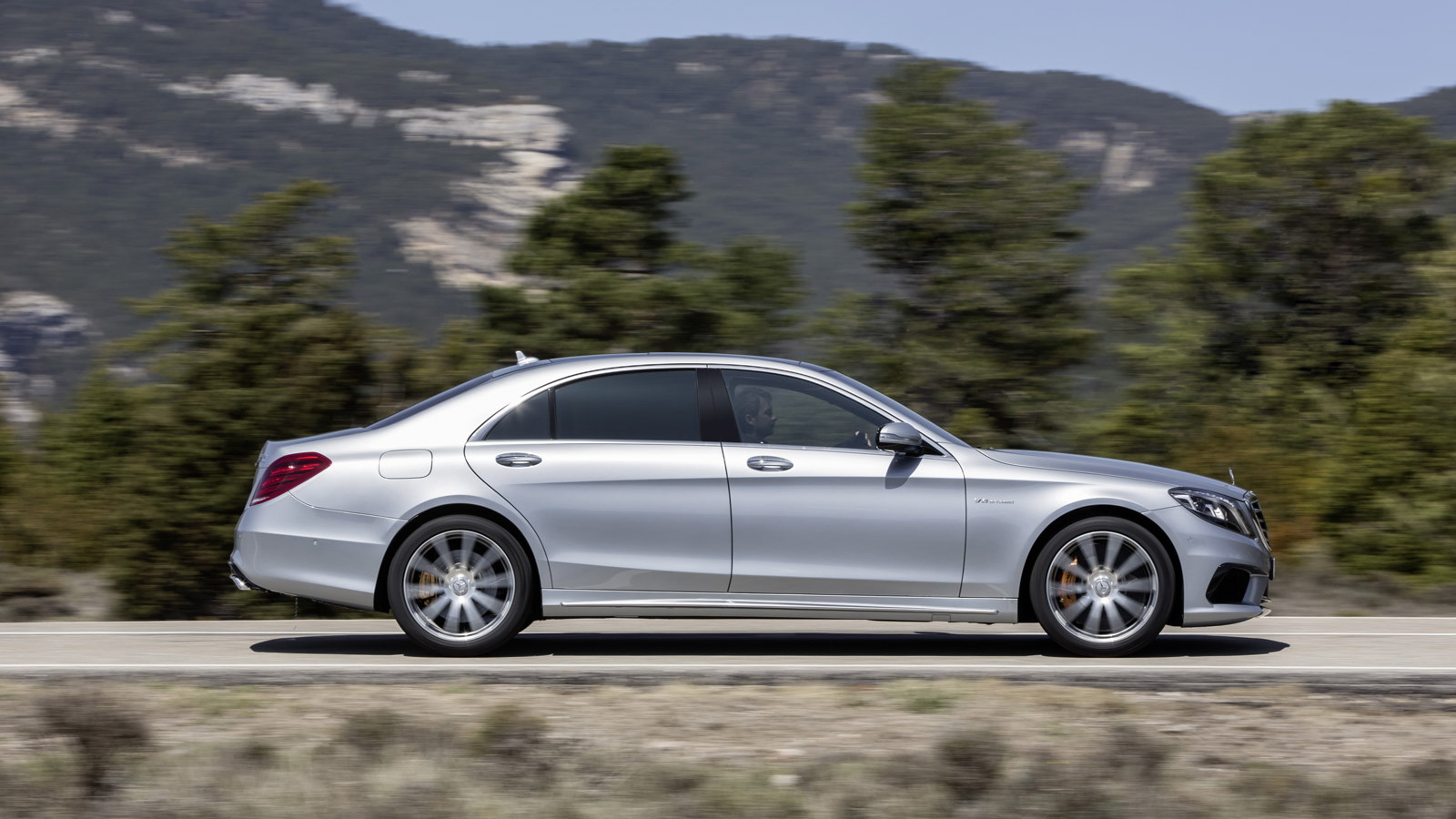 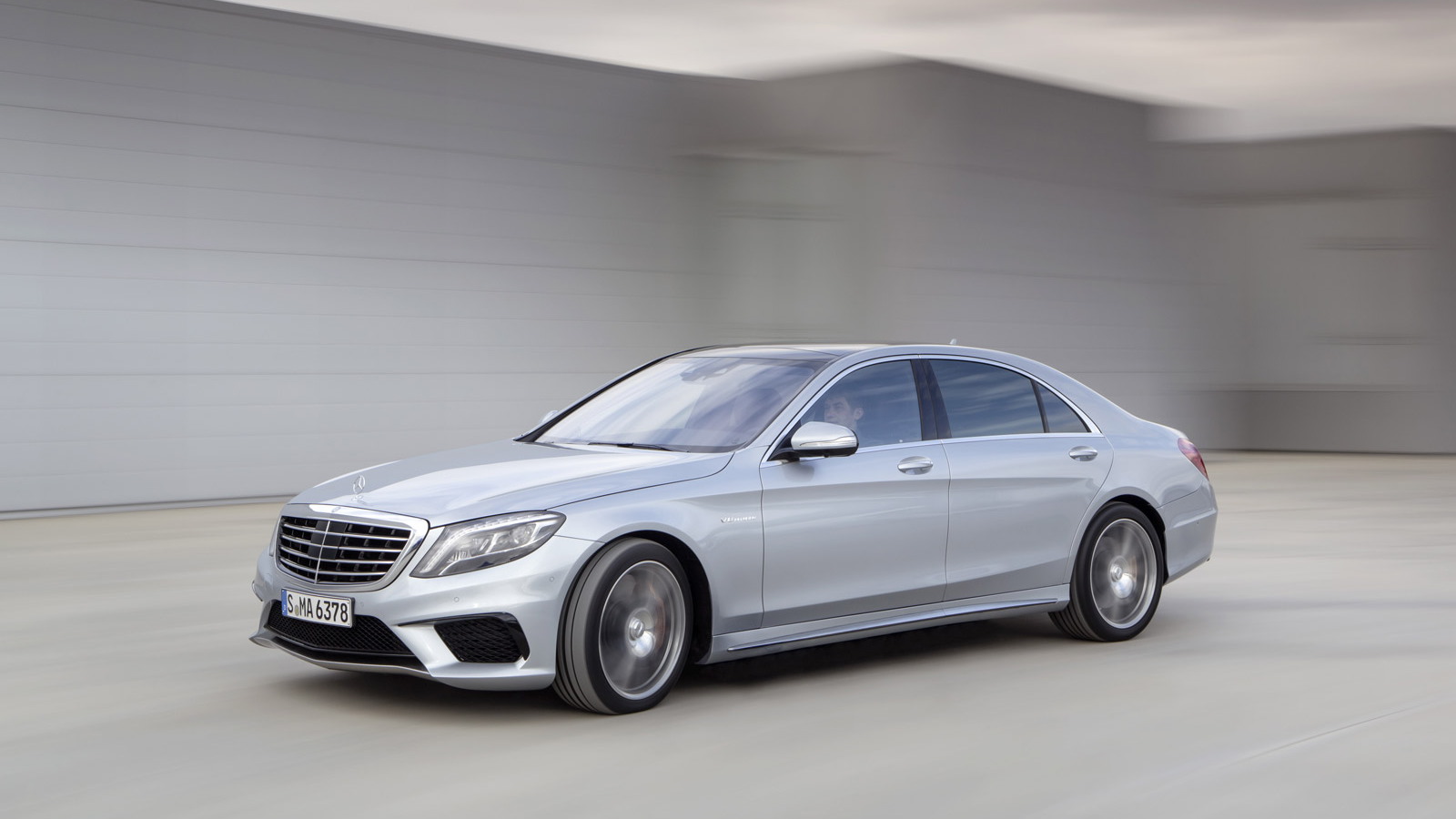 39
photos
If you’re looking for one of the fastest ways to transport you and four of your friends, in luxury and style, look no further than the 2014 Mercedes-Benz S63 AMG 4MATIC, the latest weapon in AMG’s expanding arsenal and possibly one of the fastest full-size luxury sedans ever launched.

The car is the high-performance version of the sixth-generation S-Class, and will be joining its brethren in showrooms this fall, following a debut at the 2013 Frankfurt Auto Show in September.

First, the information you’ve all been waiting for: The 2014 S63 AMG 4MATIC packs a direct-injected and twin-turbocharged 5.5-liter V-8 tuned to deliver 577 horsepower and 664 pound-feet of torque. This is the most potent version of AMG’s M157 engine we’ve seen yet, exceeding even the output of the 2014 E63 AMG 4MATIC S-Model, and promises to accelerate the big sedan from 0-60 mph in just 3.9 seconds.

That’s half a second quicker than the latest BMW M5 and just 0.1 of a second slower than the Corvette Stingray when equipped with its Z51 Performance Package (it's likely to be on par with the standard 'Vette). Top speed in the 2014 S63 AMG 4MATIC is electronically limited to 186 mph.

The key to the car’s performance is its standard all-wheel-drive system, which is becoming a standard feature on most of AMG’s lineup. This system is unique to AMG models and features a 33-67 front-rear torque split, offering the rear-biased feel we all love but with the added traction of all-wheel-drive when roads get slippery.

The system relies on a transfer case integrated with the gearbox. Torque is transferred to the front wheels via a second drive shaft and front differential. The added weight of all-wheel drive is approximately 154 pounds, but despite this the 2014 S63 AMG 4MATIC still weighs around 220 pounds less than its predecessor.

This is due primarily to lightweight construction. Measures included adding light-alloy wheels, a lithium-ion battery (this alone saves 44 pounds), using aluminum for the brakes, roof and front panels, and even using some carbon fiber like in the spare wheel recess.

Handling gear changes is AMG’s familiar SPEEDSHIFT MCT seven-speed automatic transmission, which comes with several modes including a full manual option. The transmission also comes with an engine stop-start system that, thankfully, can be disabled.

The suspension, meanwhile, features Mercedes’ AIRMATIC setup and comes with adaptive damping. One new feature is the continuous damping adjustment, which can be controlled independently in the compression stage and rebound stage. It allows better adaptation to the driving and road-surface conditions, Mercedes tells us. Drivers have two settings for the suspension: Comfort and Sport. These settings also adjust the car’s electronic power steering and work in conjunction with the car’s electronic stability system. To aid handling, a torque vectoring system done via braking is utilized.

On the styling front, designers have kept things a bit subdued this time, which sees the car maintain the elegant lines of the regular S-Class. A large, upright and distinctly three-dimensional radiator grille underlines the special status of this particular S-Class variant, and is joined by a front bumper with three large air intakes. The car also dons sporty side sills and a rear diffuser with integrated exhausts. Note, the exhaust features internal flaps which open up when in sports mode. The standard wheels measure 19 inches across while a 20-inch seat is available as an option. Also available are carbon ceramic brakes for extra stopping power and lower weight.

Inside, the subdued design theme is continued, albeit with plenty of AMG-labeled components to remind you that this is no ordinary S-Class. AMG sports seats are fitted up front and lined with Nappa leather. Also present is an IWC clock, embossed AMG logo on the center armrest and an AMG sports steering wheel.

Instead of a separate AMG DRIVE UNIT, all the specific AMG electronic controls are integrated with the standard S-Class user interface, which consists of two high-resolution screens and COMAND control dial. One of these screens serves as the car’s instrument cluster but gets unique AMG lettering and red and silver dials.

As mentioned, the car makes its world debut at the 2013 Frankfurt Auto Show in September, where it will be joined by several other 2014 S-Class members including a new plug-in hybrid model. You can access our complete coverage of the show via our dedicated hub.