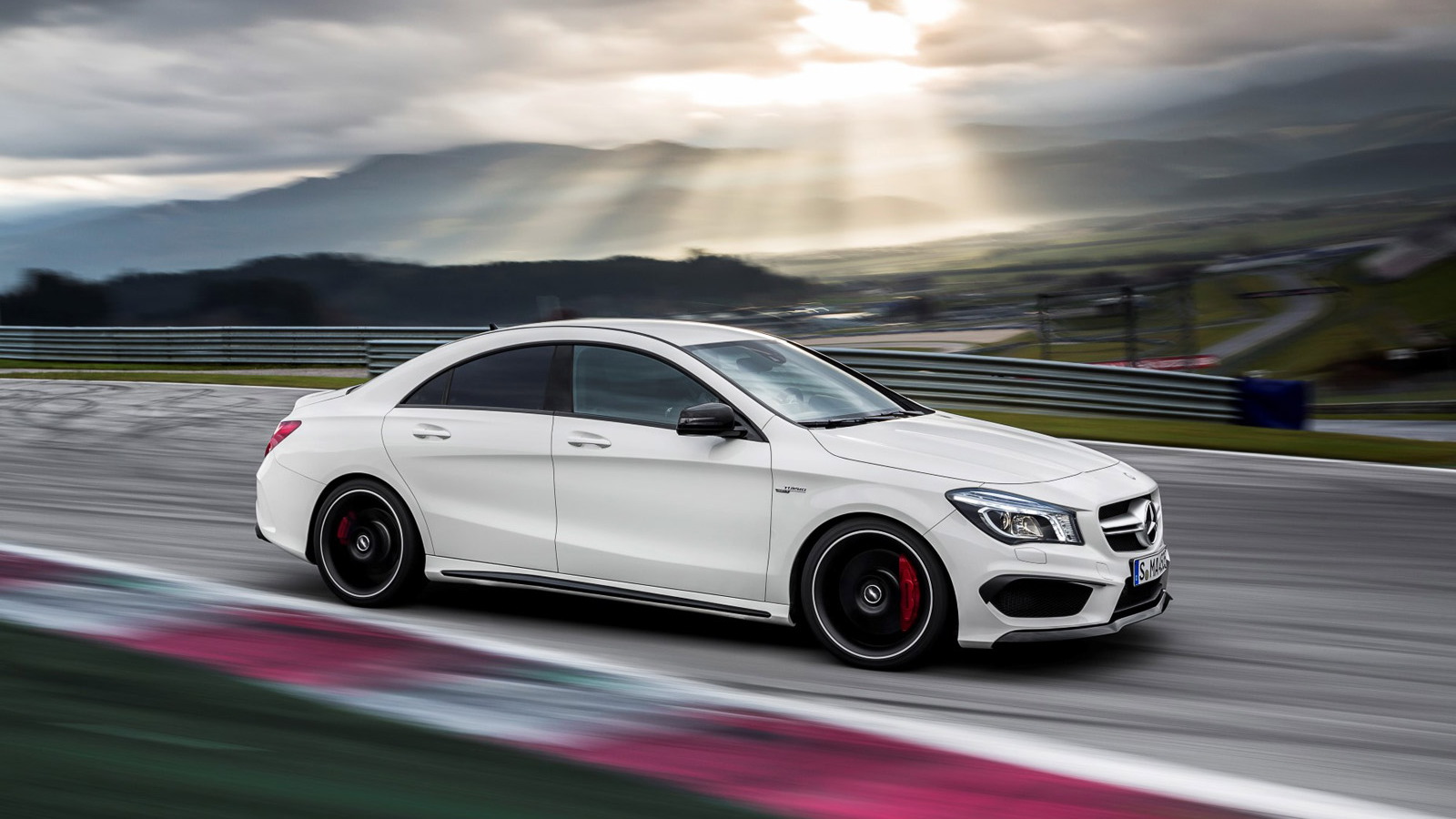 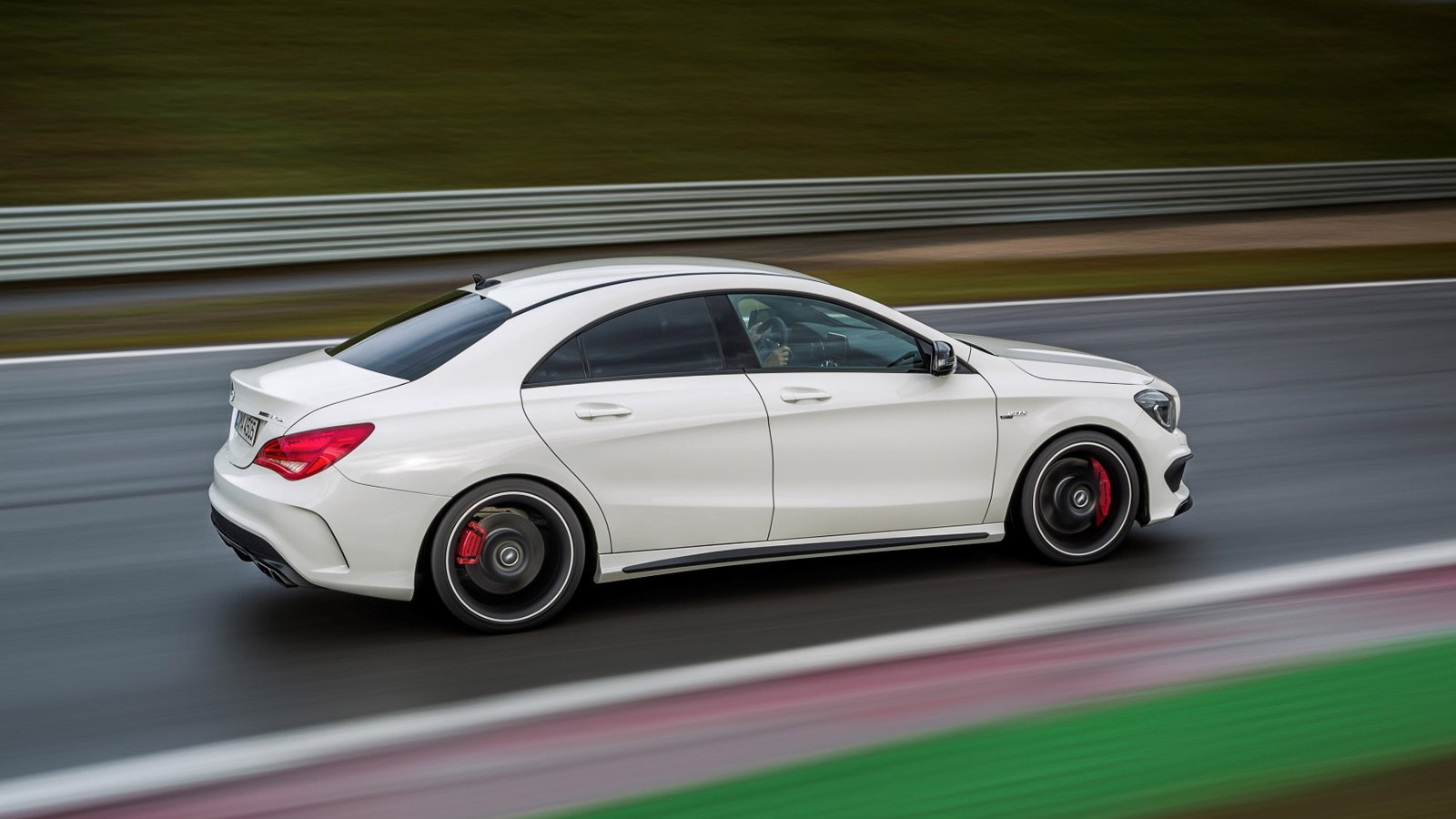 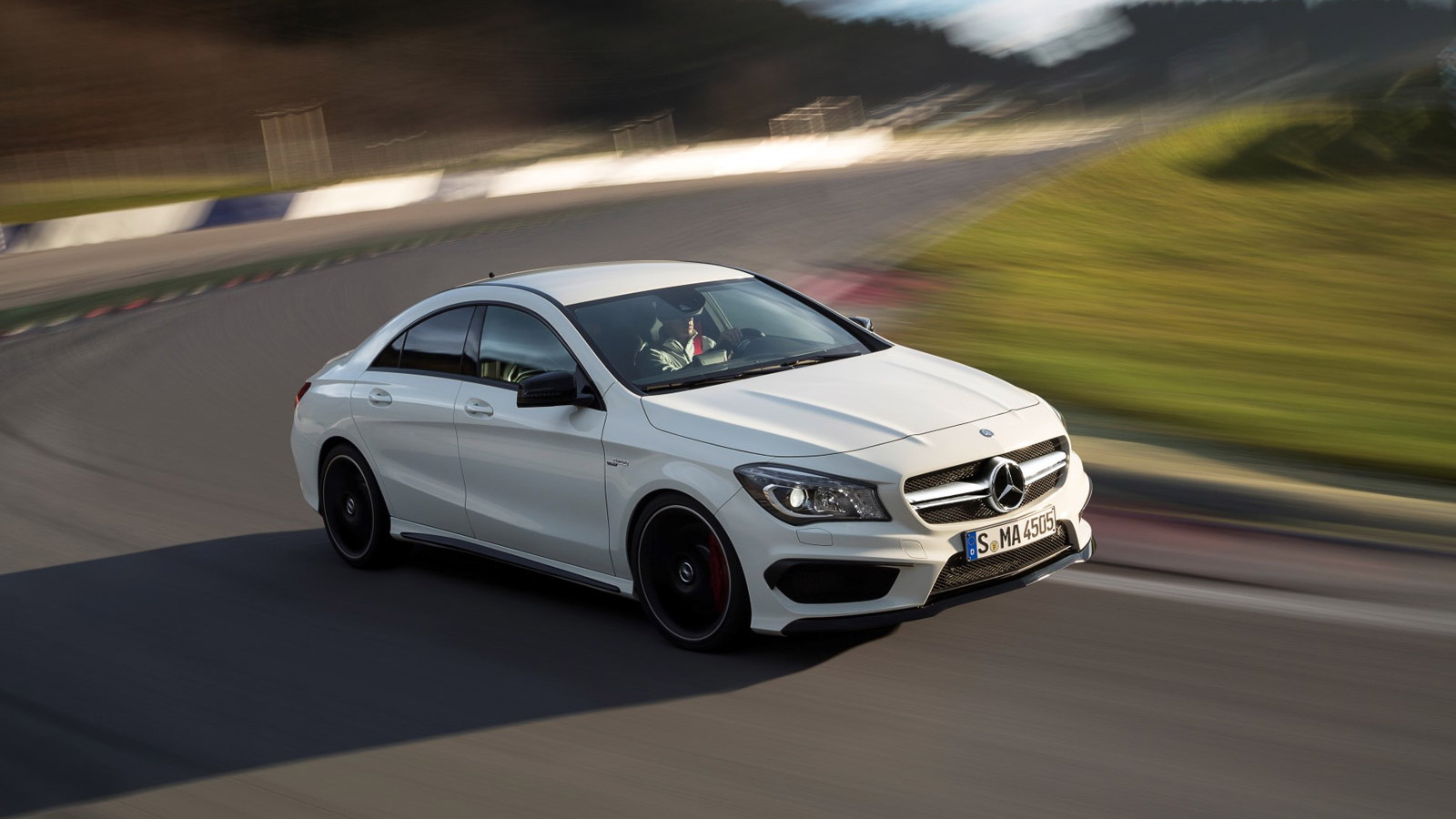 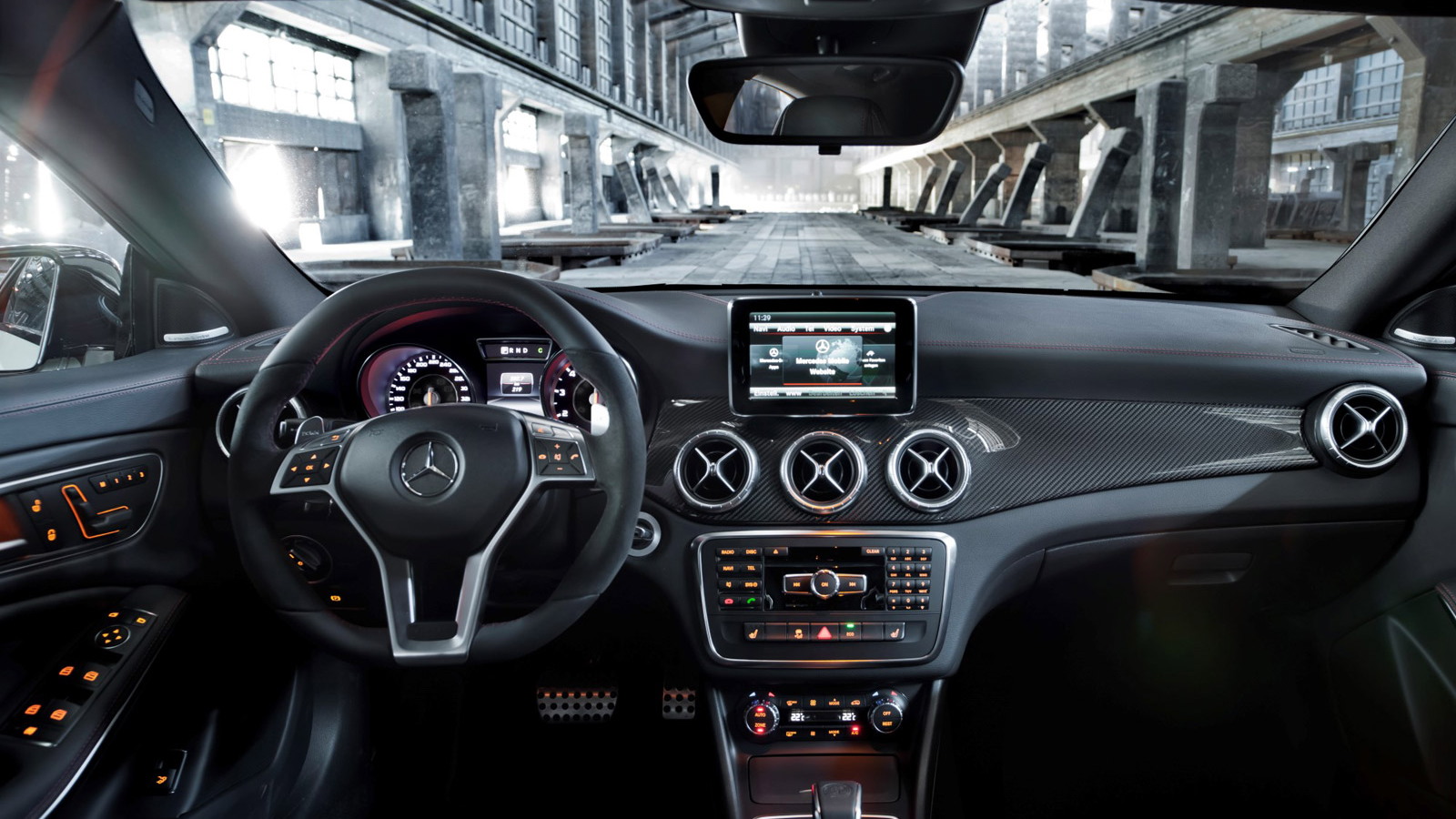 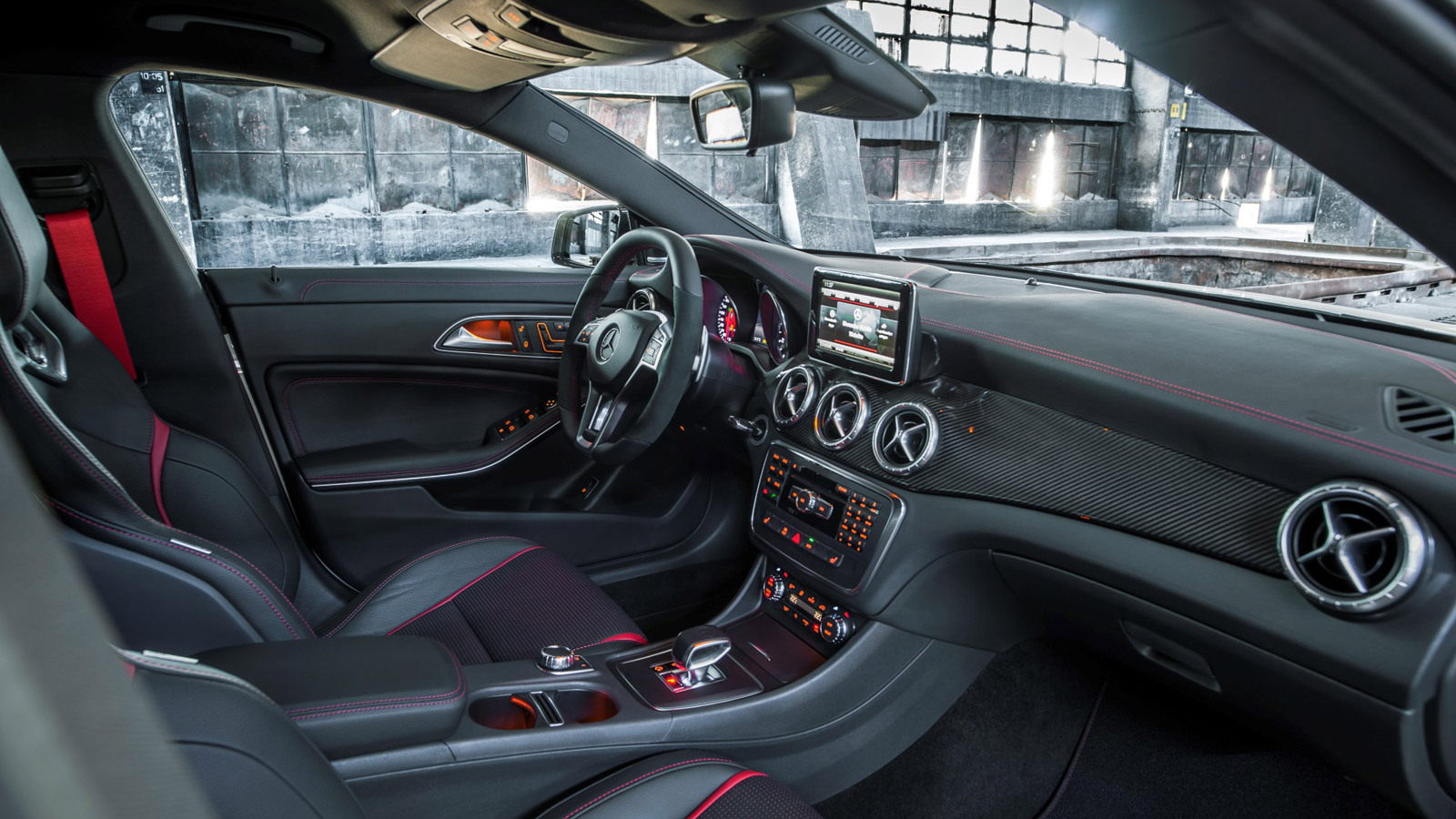 16
photos
What you’re looking at is the most powerful model in the compact class, the new 2014 Mercedes-Benz CLA45 AMG.

Although most of the car’s details are already known, its debut at the 2013 New York Auto Show this week is the first time it is appearing on U.S. soil.

The car is the end result of AMG’s tuning program for the stylish CLA four-door coupe, and it is simply bonkers.

It shares its drivetrain with the A45 AMG sold overseas, but the car’s slightly longer wheelbase means its handling characteristics will also likely differ slightly.

Under the hood is a turbocharged and direct-injected 2.0-liter four-cylinder engine, which, wait for it, develops 355 horsepower and 332 pound-feet of torque. This is more than some V-8 engines were producing not that long ago, including some of Mercedes’ own.

This earns the engine the title of world’s most powerful production four-cylinder, and we’re glad to report it also sounds brilliant. The engine runs a compression ratio of 8.6:1 and revs to 6,700 rpm, and its maximum boost pressure from its twin-scroll turbocharger is set at a relatively high 26.1 psi.

Mercedes is estimating a 0-60 mph time of 4.5 seconds for the CLA45 AMG and says the car should have no problem reaching its governed top speed of 155 mph.

That rapid acceleration is aided by a number of factors, one of which is a performance oriented all-wheel-drive system. The setup is different to Mercedes’ 4MATIC system in the CLA in that it is lighter and evenly splits torque 50:50 between the front and rear wheels. In normal driving situations, full torque goes to the front wheels only, helping reduce fuel consumption.

A two-part propeller shaft transfers the power from the engine to the rear axle. In the interests of favorable weight distribution, an electrohydraulically controlled multi-disc clutch is integrated with the rear axle differential. The multi-disc clutch immediately detects slip at the front axle, at which point a hydraulic pump instantaneously presses the discs together and channels the engine torque to the rear wheels as necessary. All this takes place virtually without the driver noticing, according to Mercedes.

Like every AMG vehicle, the new CLA45 AMG also incorporates sophisticated chassis technology, all of which is controllable by the driver. At the heart of the system is the AMG DRIVE UNIT, which is used to adjust all the individual settings like the performance of the transmission, suspension and electronic power steering.

The suspension is also unique to the AMG model. It consists of a multi-link setup at both axles, which is said to be much stiffer than on the regular CLA. This is to ensure agile turn-in properties and more precise and direct feedback from the road surface. It should also allow higher cornering speeds.

The stock wheels are 18-inch light alloys, shod with 235/40 size tires. Within these are ventilated and perforated steel brake discs, measuring 13.8 inches up front and 13 inches in the rear.

While the exterior of the CLA45 AMG clearly differs from that of the regular CLA, so does the interior, which gets premium materials including available carbon fiber trim. Buyers will also find brushed aluminum inside the cabin, sporty bucket seats up front as well as AMG-specific items including the instrument cluster, steering wheel and floor mats.

The 2014 Mercedes-Benz CLA45 AMG hits showrooms this November, priced from $48,375 including a destination charge.

Keep up on all the big announcements at this week's New York Auto Show, here at Motor Authority.