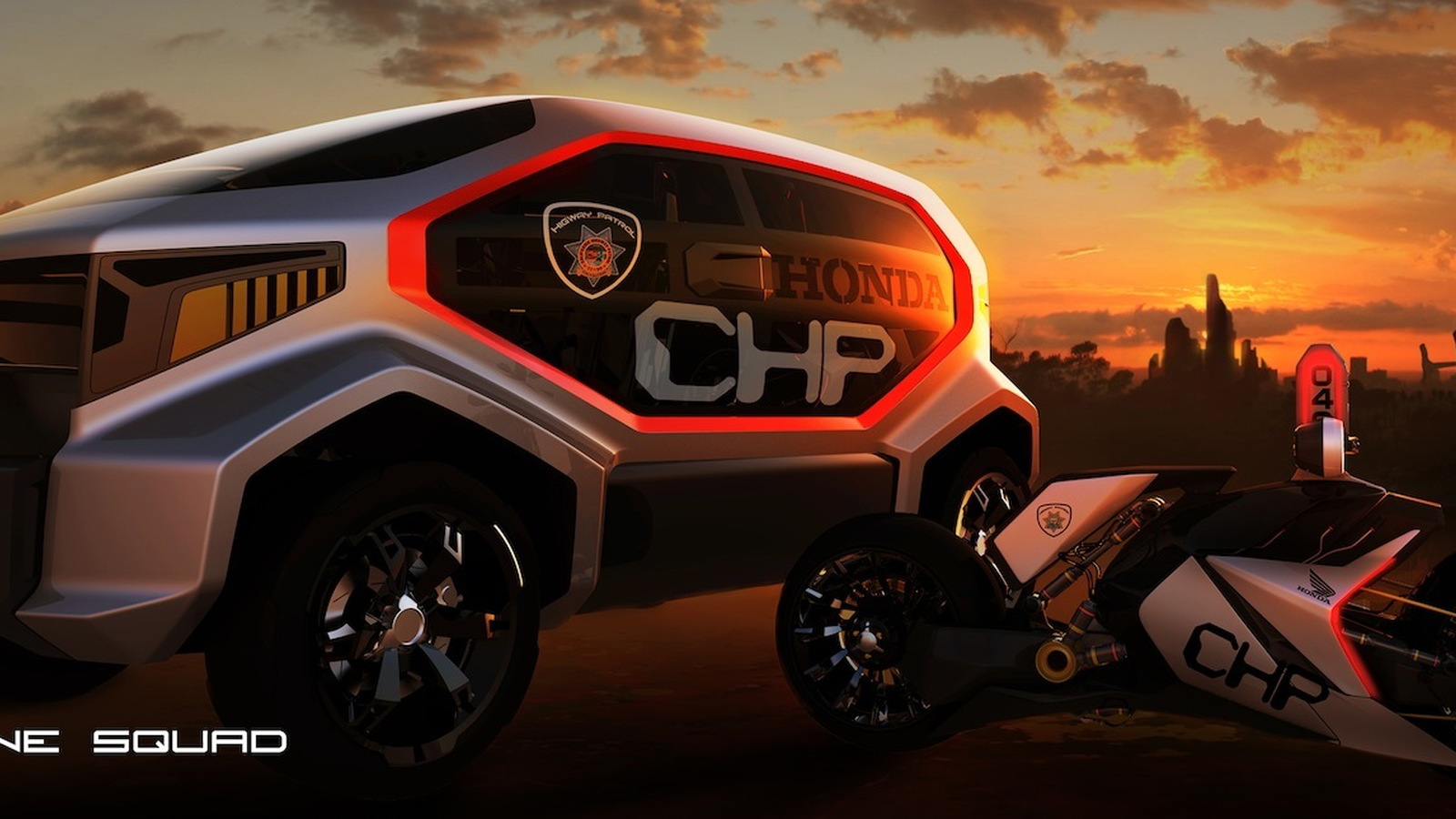 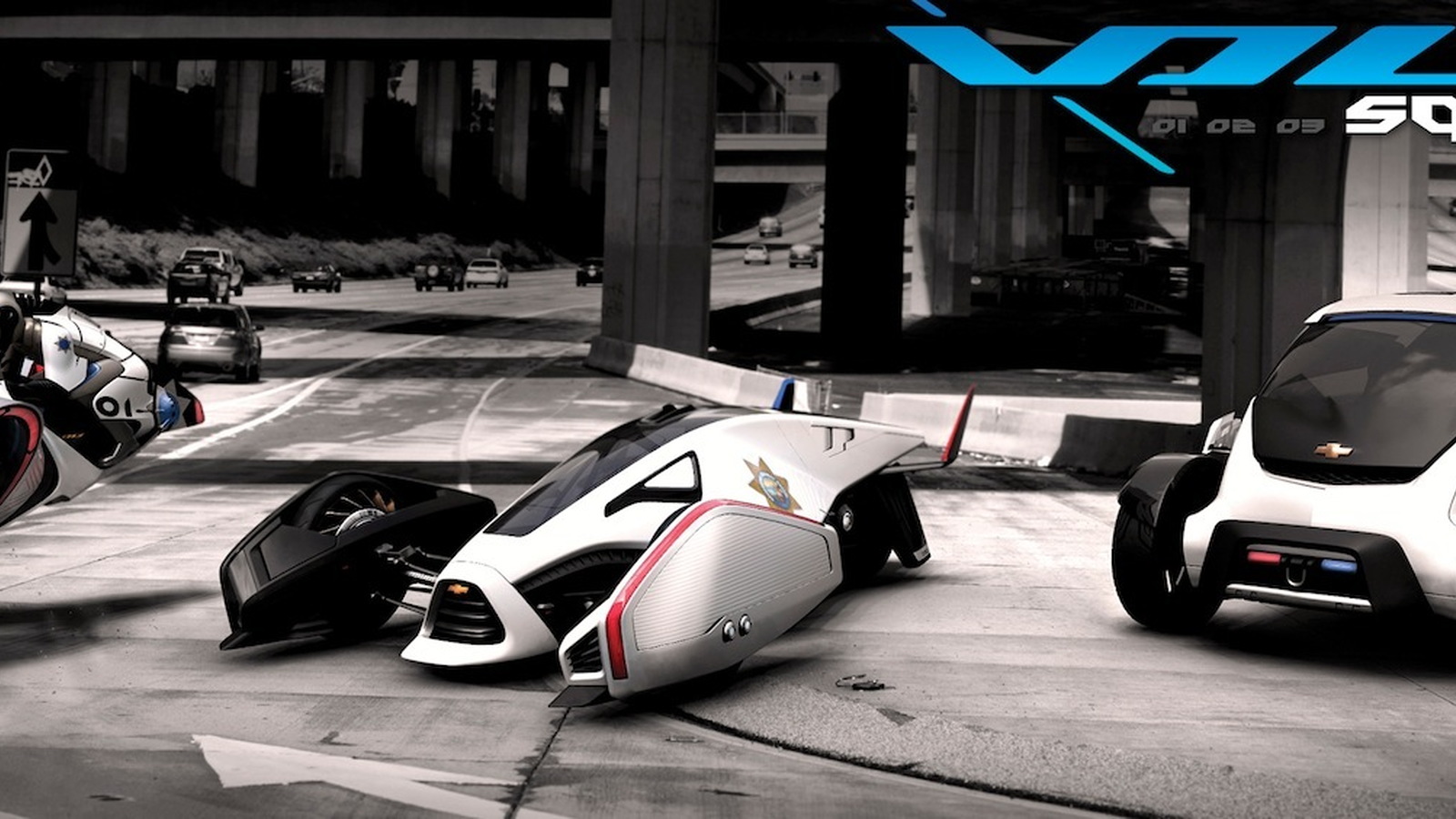 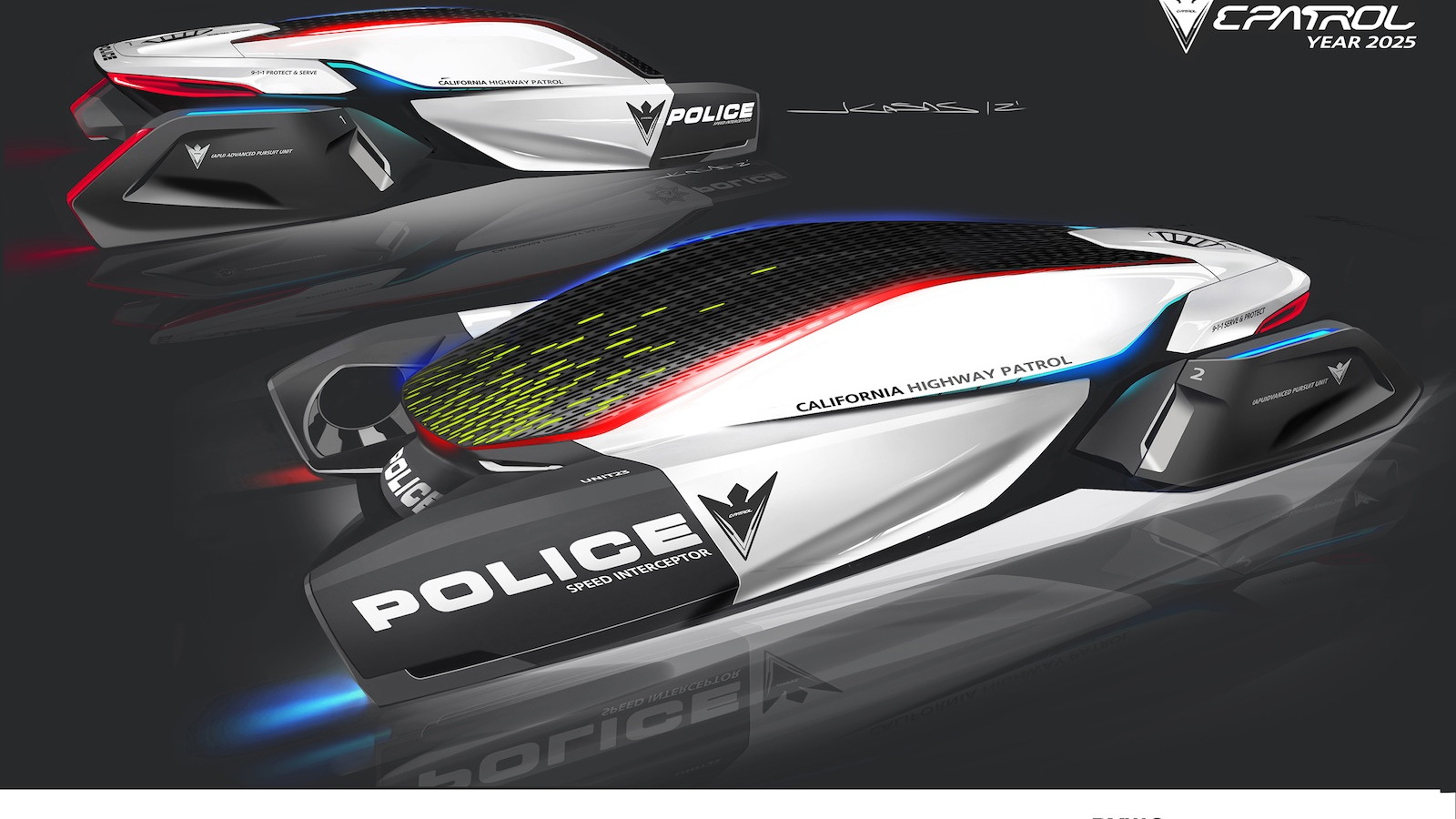 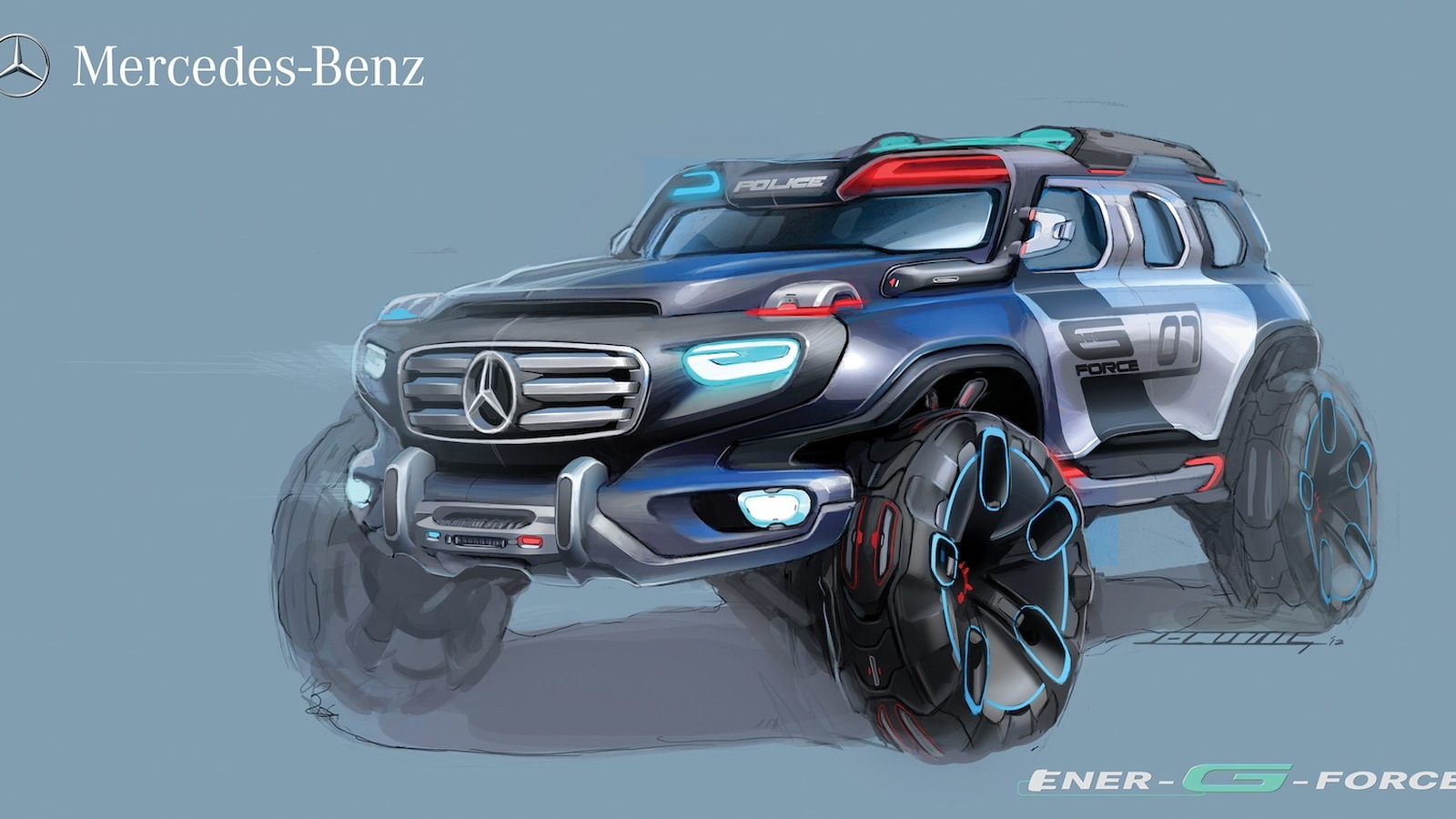 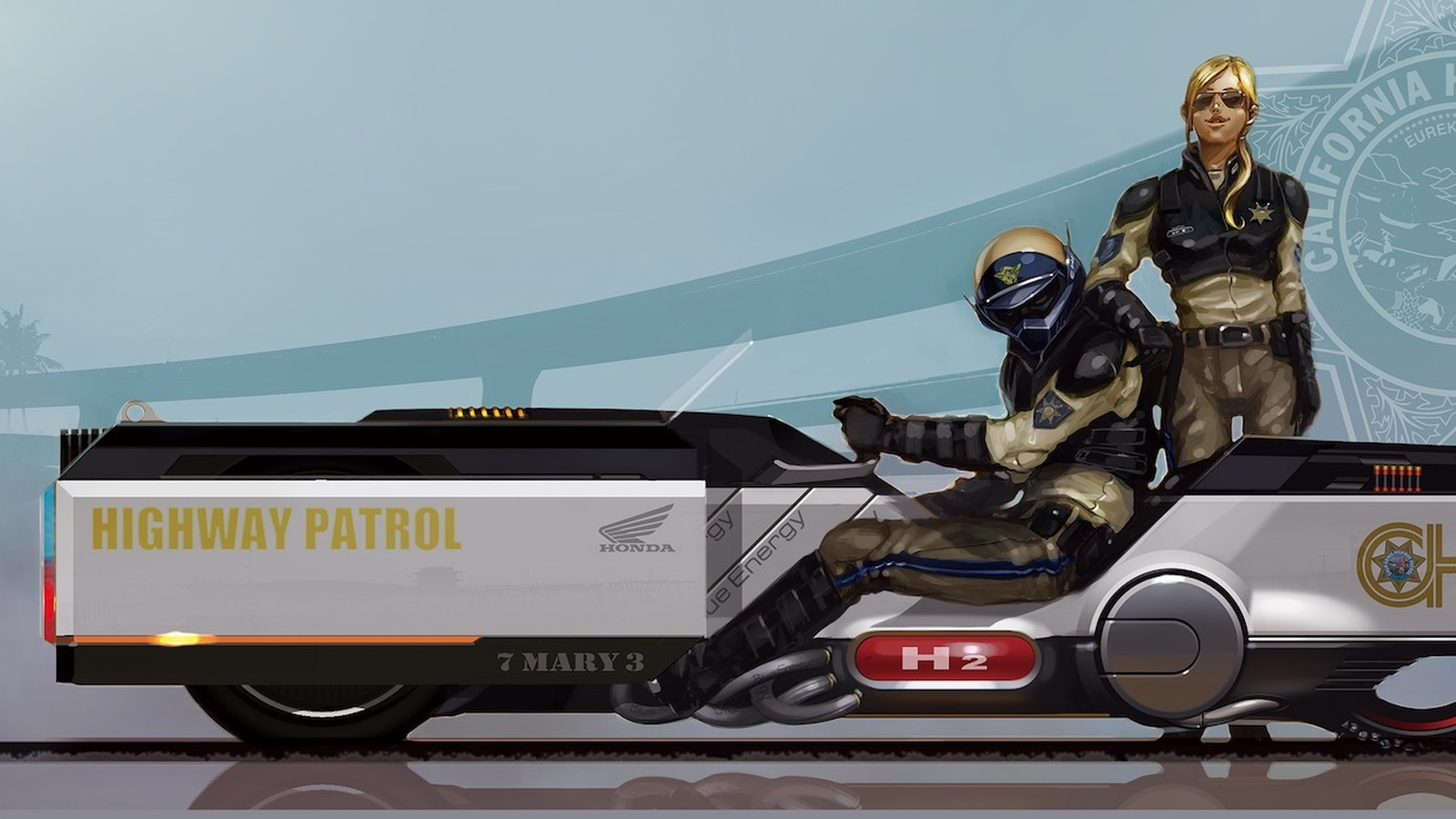 6
photos
Every year, the Los Angeles Auto Show offers up its Design Challenge, meant to give attendees a look into the world of automotive design. Last year, the theme was “Hollywood’s Hottest New Movie Car,” and the award went to designers from Smart.

This year’s theme was the “Highway Patrol Vehicle of 2025,” and entries were received from a variety of design studios, including BMW, General Motors, Honda R&D Americas, Honda R&D Tokyo, Mercedes-Benz and Subaru, to name just a handful. As you’d imagine, each had a decidedly different spin on the future of police cars.

BMW Group DesignworksUSA penned a Human-Drone Pursuit Vehicle, giving drivers the ability to deploy driving or flying drones when stuck in gridlocked traffic. Even in 2025, BMW assumes that L.A.’s traffic problems aren’t going to be eliminated by a lack of fossil fuels.

General Motors Advanced Design California has come up with a three-vehicle solution, offering police the ability to Observe, Pursue or Engage a suspect. GM’s Volt Squad is electric-powered, based on a future evolution of the automaker’s Voltec drivetrain.

Honda R&D Americas is showing the CHP Drone Squad, designed to function on roads without any changes to infrastructure. Like BMW’s design, Honda America’s calls for  deployable drones, but in the form of un-manned motorcycles to slice through L.A. traffic.

Honda R&D Company, Ltd. serves up its CHiPs 2025 Traffic Crawler, meant to adapt to changing traffic and vehicle conditions. Honda promises that it delivers both sporty mobility and the toughness required for “severe traffic situations.”

Perhaps the most conventional vehicle design was offered up by Mercedes-Benz, with its Ener-G-Force environmentally-friendly SUV. Based on the G-Class, the Ener-G-Force assumes roads of the future will be electronically governed, making law enforcement just a bit easier than it is today.

Finally, Subaru’s SHARC (Subaru Highway Automated Response Concept) is arguably the most radical of the group. While we’re sure that it delivers the promised carbon-neutrality and rapid emergency response, it seems a bit delicate for police work. Also, we’re pretty sure that floral-themed uniforms won’t be a hit with those on patrol, even in Hawaii.

Entries will be judged by a panel of experts, including Tom Matano, executive director, School of Industrial Design at San Francisco’s Academy of Art University; Imre Molnar, provost and chief academic officer at Detroit’s College for Creative Studies; and Stewart Reed, chair of Transportation Design at Pasadena’s Art Center College of Design.

Stepping into the role of guest judge will be Bruce Meyer, board member of the California Highway Patrol’s 11-99 Foundation and former chairman of the Petersen Automotive Museum. Look for the winning design to be announced on Thursday, November 29, during the press days for the Los Angeles Auto Show.