In 1907, Damiler-Motoren-Gesellschaft (DMG), the predecessor of today’s Mercedes-Benz, launched a revolutionary commercial vehicle it called the “Dernburg-Wagen.”

Billed as the first commercially available four-wheel-drive vehicle, the Dernburg-Wagen also featured four-wheel steering to make it more maneuverable in tight quarters. With an impressive 12.6-inches of ground clearance and a 6.8-liter four-cylinder engine good for 35 horsepower, the five-passenger Dernburg-Wagen was the Unimog of its day.

It would take Mercedes-Benz another four decades to launch the “Universalmotorgeraet,” what we know today as the go-absolutely-anywhere Unimog. Unveiled in 1947, the Unimog soon won praise from users everywhere for its durability and platform flexibility.

In its 60-plus year history, the Unimog has been configured for almost every task imaginable. They’ve served as troop transports, radio trucks, brush fire trucks, ambulances, cranes, snow plows and farm vehicles for generations of users, and ex-NATO Unimogs remain in high demand among off-road enthusiasts.

In 1972, Mercedes began work on a commercial vehicle with a bit less utility and a bit more practicality than the Unimog. Contrary to widely-held belief, the “Gelaendewagen,” or G-Class, was not developed for military purposes, although numerous armed forces quickly embraced the G-Class for its capabilities and rugged reliability. 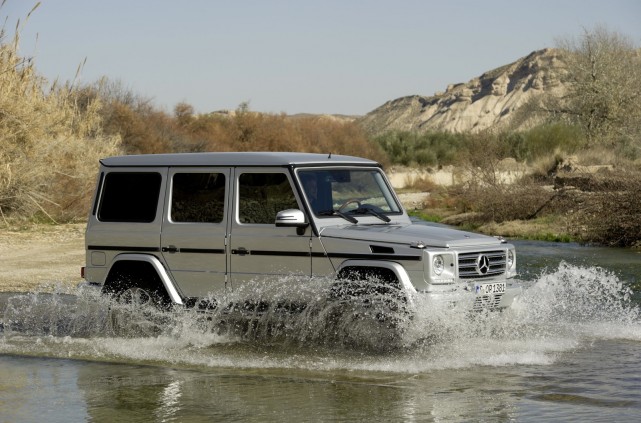 Even the original G-Class could climb an 80-percent grade (with proper tires and a winch, we assume), endure a tilt angle of 54-percent and deliver ground clearance of nearly 8.3 inches.

Today’s G-Class boasts modern technology such as permanent all-wheel-drive, four-wheel electronic traction control (what Mercedes calls 4ETS), electronic locking differentials and both high and low gear ranges, ensuring that it can deliver passengers in comfort from point A to point B, regardless of what’s in between.

Four-wheel-drive and all-wheel-drive systems aren’t just reserved for Mercedes-Benz trucks and SUVs, either. Many vehicles are available with Mercedes’ 4Matic all-wheel-drive, and even the newly announced A45 AMG hot hatch will get a unique AWD system for enhanced traction under all conditions.