Volvo has a well-established reputation of building some of the safest cars in the world but the firm believes it can improve on its own standards by reaching the ultimate goal of avoiding car accidents all together and reducing the road death toll (for drivers of its cars) to zero--a goal it hopes to achieve by as early as 2020.

To do so, Volvo will be introducing several new safety technologies, most of them tailored to the way drivers behave in the modern traffic environment.

For instance, surveys from three different research institutes in the U.S. reveal that modern drivers spend 25 to 30 percent of their time behind the wheel doing other things, such as focusing on mobile communication which is becoming much more common thanks to new connectivity features coming into cars.

To address this, Volvo has developed safety technology that focuses on three areas most affected by this distracted driving: staying safely in the current lane, avoiding accidents at crossroads and junctions, and avoiding collisions with pedestrians and animals.

Autonomous driving is being investigated by a number of automakers and will initially come in the form of a system that helps drivers stay in their lane and follow the flow of traffic if queues build up.

Using data from a camera and radar sensors, the system allows a car to follow the vehicle in front. The engine, brakes and steering respond automatically. However, it is always the driver who decides. He or she can take control at any time.

Crossroads and junctions are often the trickiest part of driving. When many road users cross each other's paths at the same time, and from different directions, even a small mistake can lead to serious accidents.

In the U.S., for example, 21.5 percent of all fatal accidents in 2007 occurred in intersections.

Note, in order to obtain the necessary data for the development of these systems, cars are driven hundreds of thousands of miles in various traffic environments the world over. After all, the system has to be equally capable of helping drivers in Bangkok and Vancouver, and in a way that is tailored to local variations in driving style and traffic intensity. 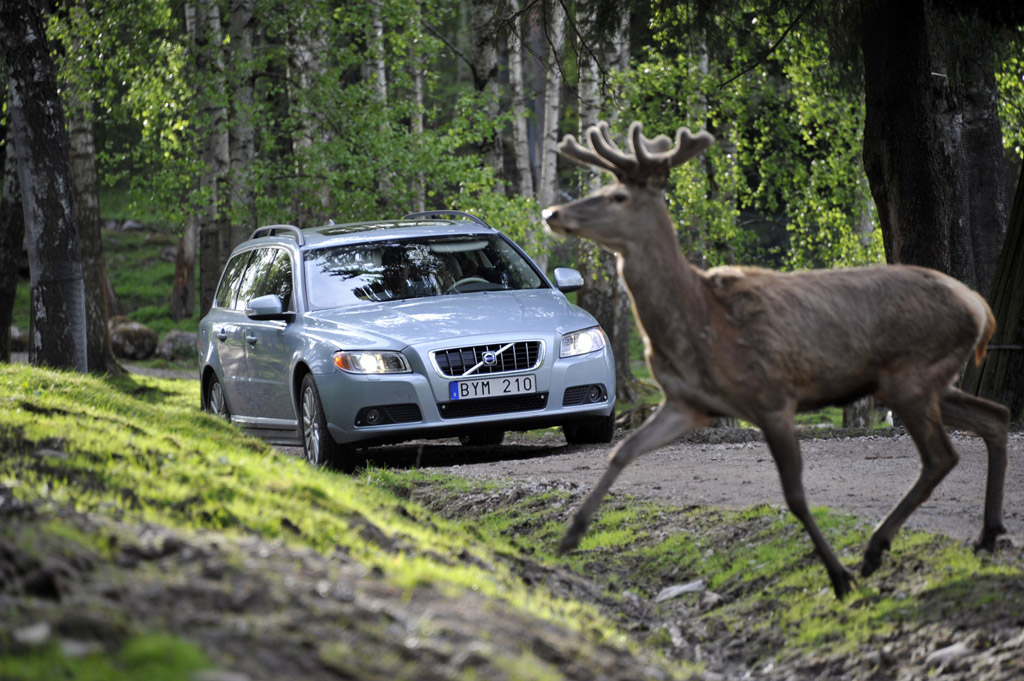 Building on its previous City Safe pedestrian detection system, Volvo is adding a new feature focusing on the detection of animals on the road ahead and preventing impacts with vehicles.

Accidents involving wild animals can be a major traffic problem in some parts. In Canada, about 40,000 such accidents leading to vehicle damage are reported every year. Sweden reported 47,000 animal collisions in 2010. In the U.S., about 200 people a year are killed in impacts with wild animals, mostly with deer. However, these official accident statistics do not reveal the whole truth. For example, they don't include all those accidents where a driver swerves to avoid an animal and instead collides with another vehicle or veers off the road.

Volvo's system is trained to recognize the shapes of animals and their movement patterns via a vast amount of collected data. Importantly, this also helps improve the existing pedestrian detection capabilities of the system.

While often, impacts with animals in remote areas are at high speeds, Volvo’s aim is to try and reduce the speed leading up to the impact as much as possible. Once speed drops below 50 mph or so, a car's safety systems are effective and the risk of serious injuries is small. This requires the ability to detect the animal from a distance of about 100 feet.

Volvo is yet to announce when some of these new safety technologies will feature on its cars.