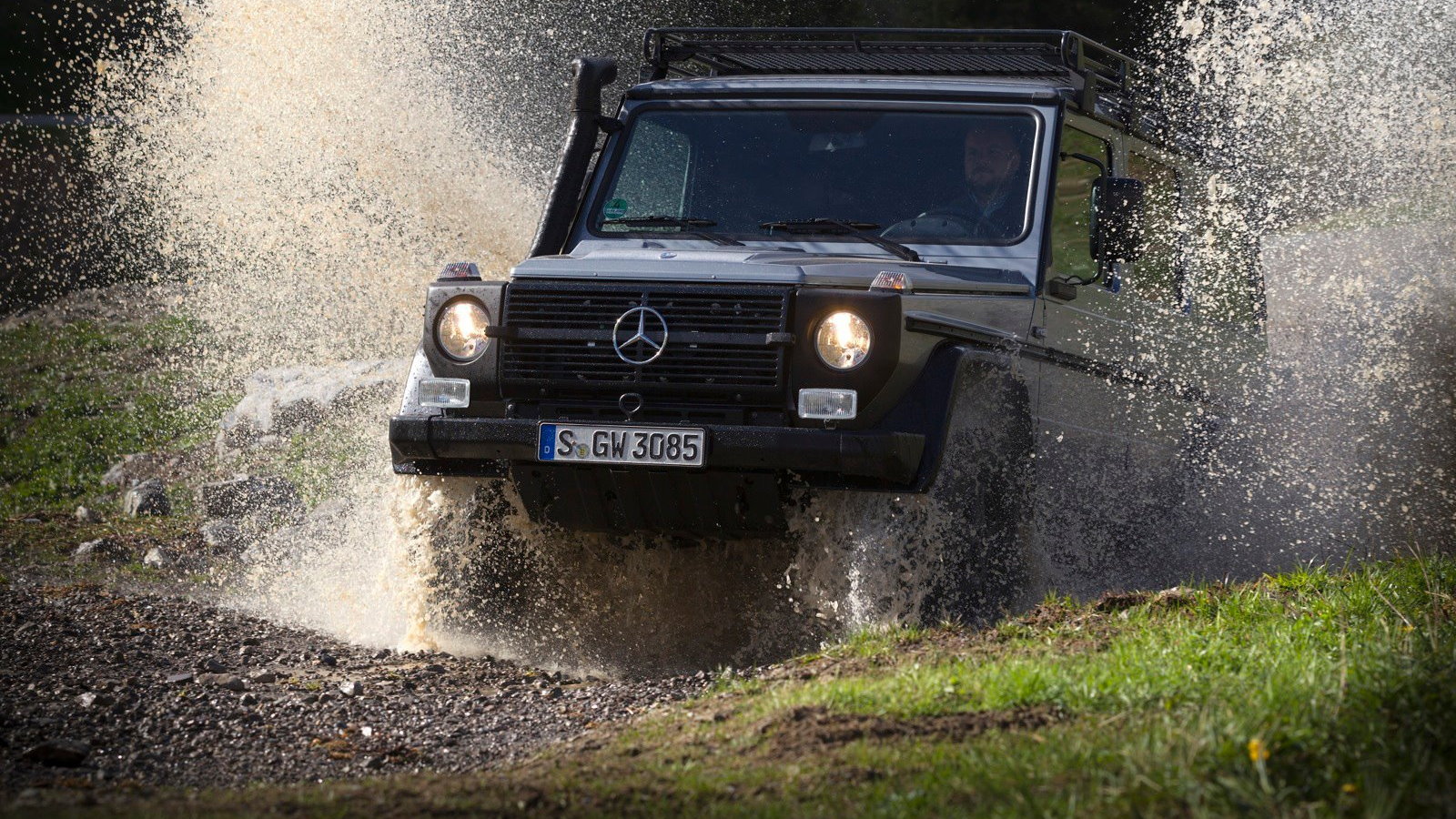 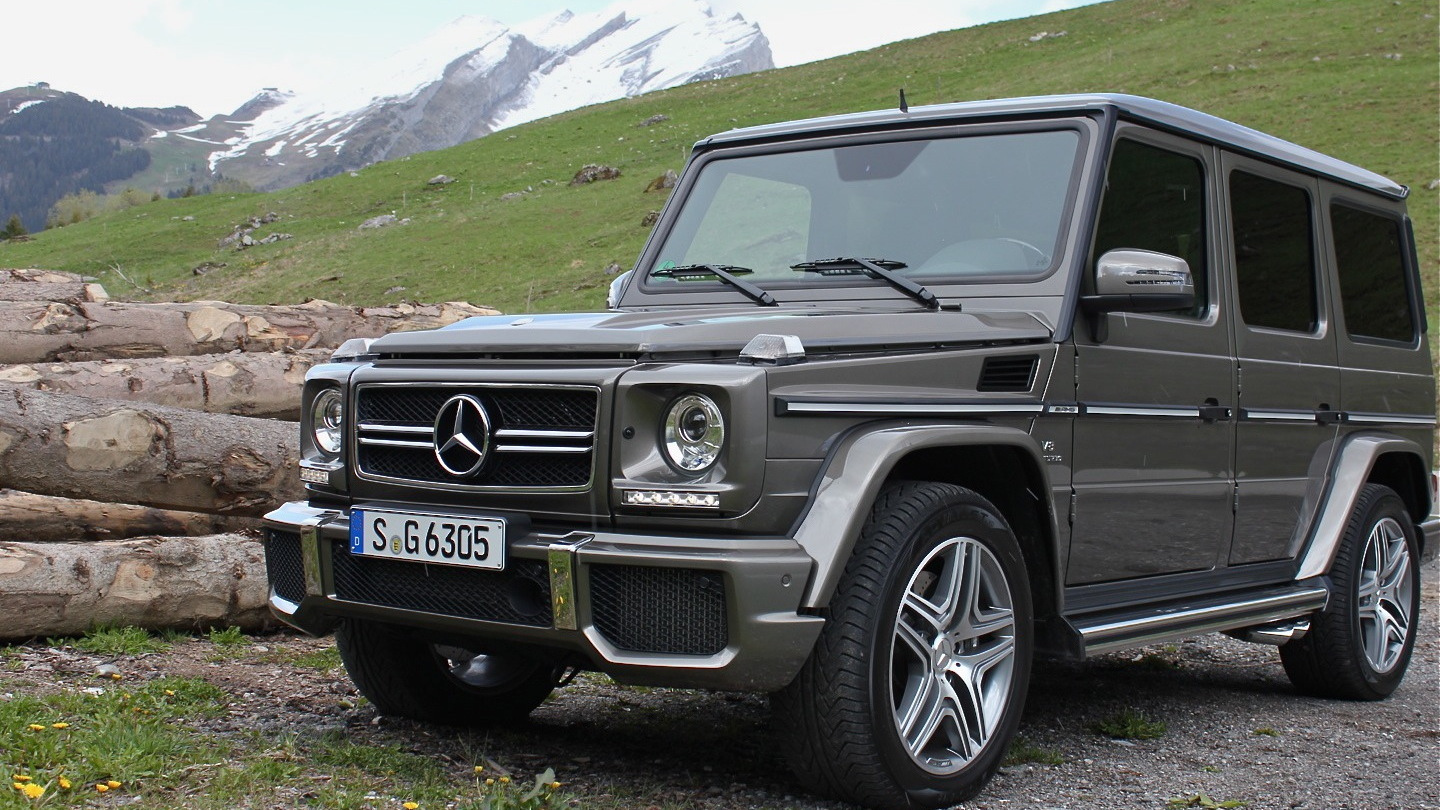 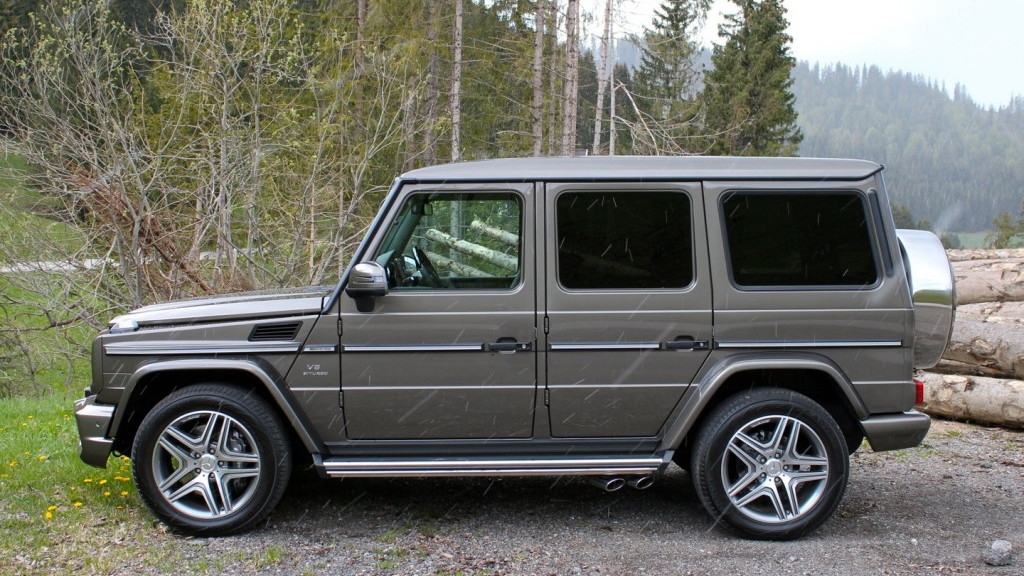 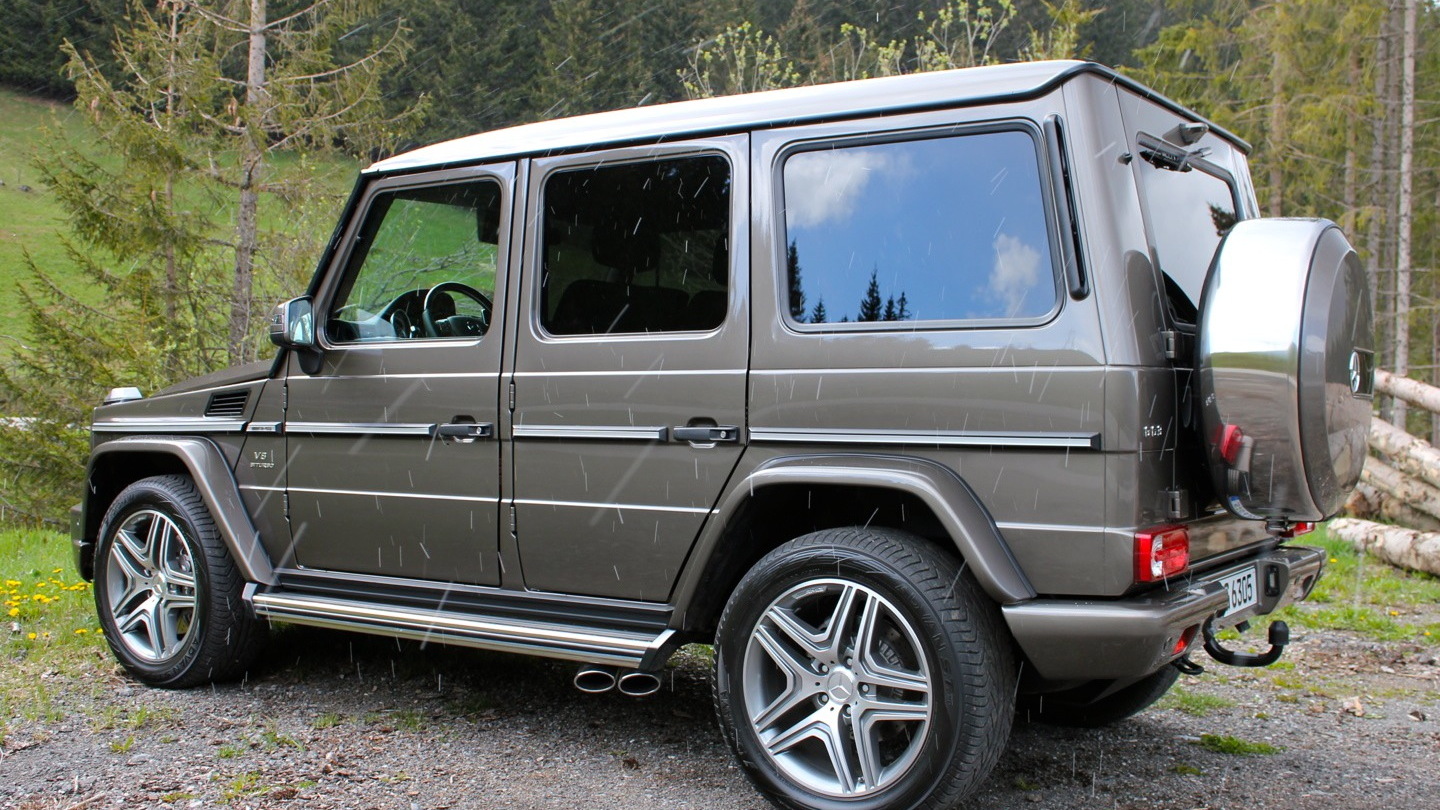 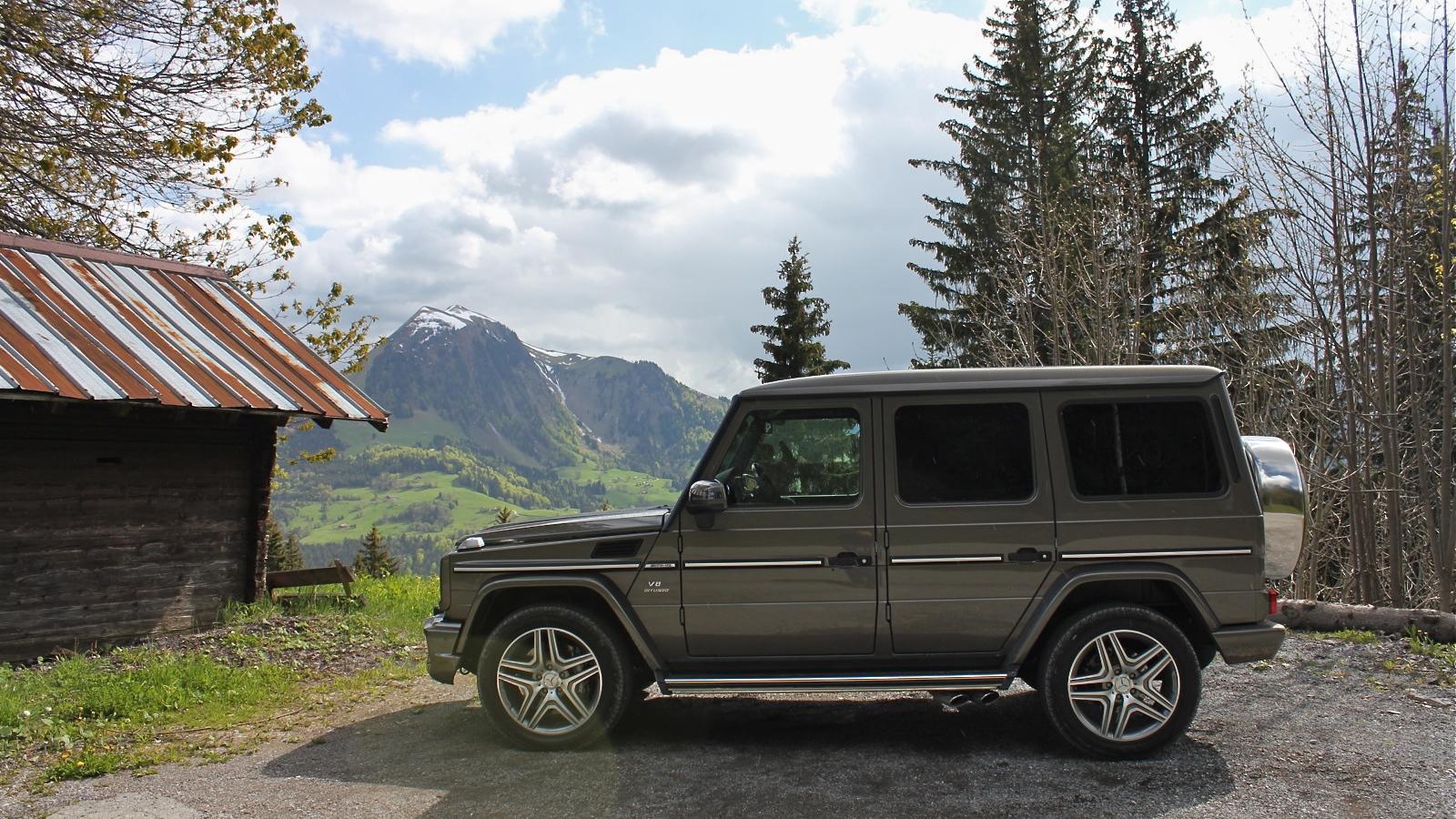 No respectable dictionary would define a neologism like "ridonkulous" just yet. And even if they did, they probably wouldn't do it with a picture of a Mercedes SUV blowing through a water trap like it had lost all common sense and all ability to tread lightly on anything, whether it be terra firma or Greenpeace's tender, delicate feelings.

But hey, our name's not Webster, and we'll do what we want.

This past week, we got involved in a situation with one very old plane and one very new one, shuttling ironically between one very new airport and one very old one--all to get into the seat of the G63 AMG, the ridonkulous new SUV that's old enough to be your father, and yet refreshingly and breathtakingly new this year. At least on the inside. You know, where it counts.

The G Class always has been able to do the unimaginable, but in the past, with its oldest eights and wheezy diesels, it's been known to take its time climbing up an Alp or two. That ended long ago when U.S. versions adopted a new brace of V-8 drivetrains, one with the magic of supercharging.

Now with the latest AMG swap-in, the faint noise you hear is that past whooshing way out of Doppler range. The base G550, mostly carried over from 2012, can execute 0-60 mph runs in a Mustang-like 6.0 seconds. The new twin-turbo G63 AMG can hit it in 5.3 seconds, and can cruise the autoroute easily at 130 mph, so long as your debit card can take a huge refueling hit every 200 miles or so.

Where to test all this? We flew over to La Clusaz, a charming little French ski village wedged between a herd of Olympic host cities--Chamonix, Grenoble, Albertville, Torino. (Neighboring burg Annecy just lost the Big One to...South Korea?) La Clusaz is so central to the whole winter-sports movement that the entire village practically landed a salchow for Mercedes, handing over the town square to the company and to a portable steel mountain called the Iron Schöckl that simulates the real mountain in Austria that the G Class calls its spiritual home.

In an ideal world, we'd all buy a G-Wagen for its incredible off-road prowess. Even strapped to the AMG rocketship, the G-Class still can lock up all three of its differentials like an iron maiden, and climb the Iron Schockl after a ten-minute jog around the block. We wanted proof, of course, so we strapped in for not one, but two rides to the top and back. First we clambered up the metal railings of the Schöckl and waited for its carefully tuned hydraulic shocks to pivot under the weight of the G forward for its trip down the Jungian jungle gym. Then we did it all in reverse, because it's good on camera, and apparently it's good on the G's cooling system, too.

The Schöckl, I figured later, was the pillow-top chocolate on a long day of testing the G63 AMG--first on pavement, then on a rutted, rocky off-road path dug into land not good enough for heroic ski jumps or deified dairy cattle. It underlined the obvious: this is a massive musclecar shod with REI's latest, greatest hiking boots, an SUV bursting with manic power and grip, restrained only by regularly administered doses of stability control.

Of course, the G63 AMG isn't alone. The G550 also returns for the 2013 model year, with the 5.5-liter V-8 in normally aspirated form, delivering 388 horsepower and 391 pound-feet of torque. Both versions sport a seven-speed automatic transmission. The long-handed-down body-on-frame construction, live axles, and lack of electronic controls for traction modes, terrain types, and other niceties are left untouched--it's one of the few SUVs left on earth that can still remember when it had manually locking wheel hubs.

It's so far removed from the modern world of the crossover, you'll never mistake it for anything without so much as a single locking diff. Particularly when you're hip-deep in muck--or teetering on the narrow metal edge of the Schöckl.