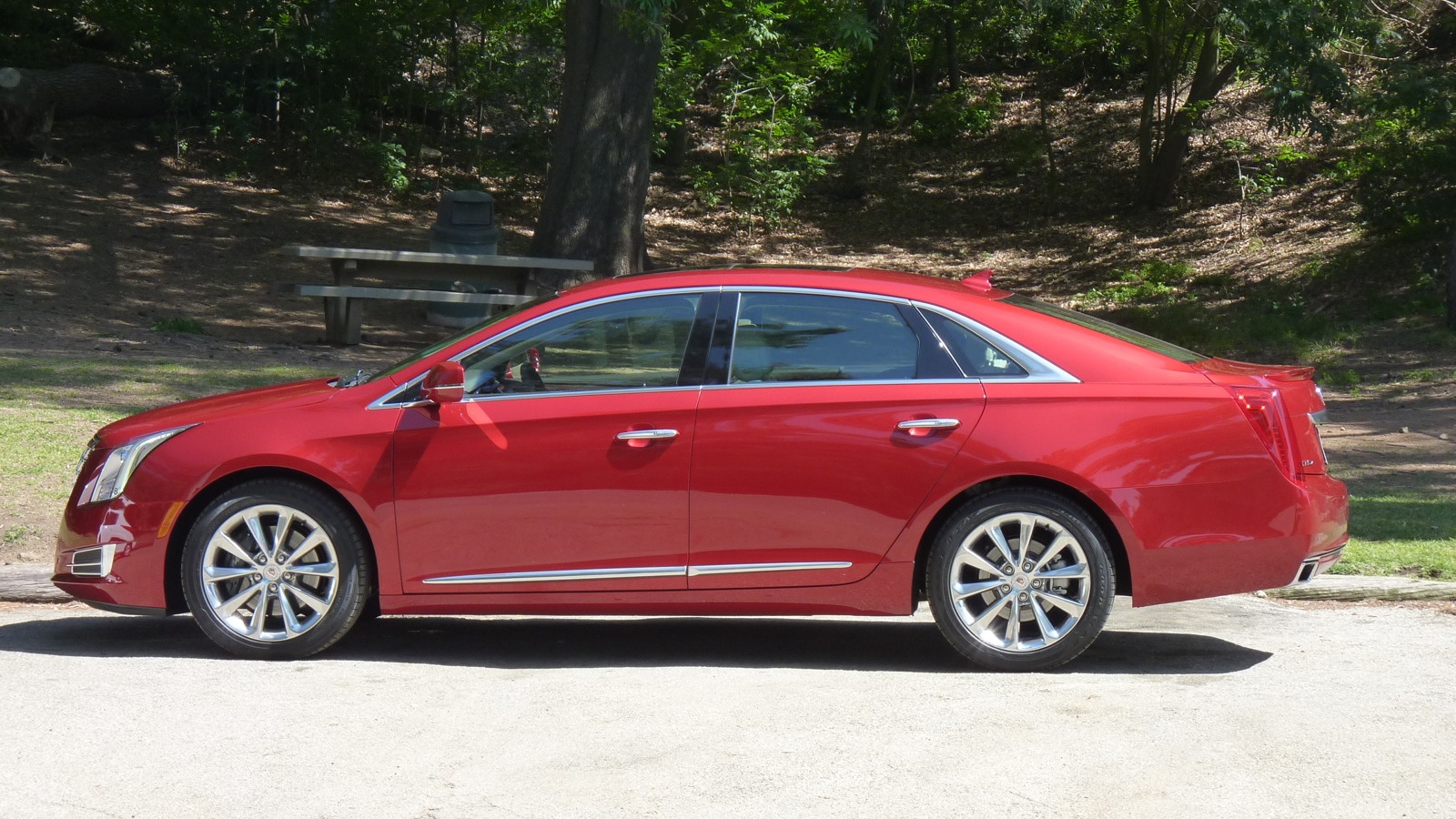 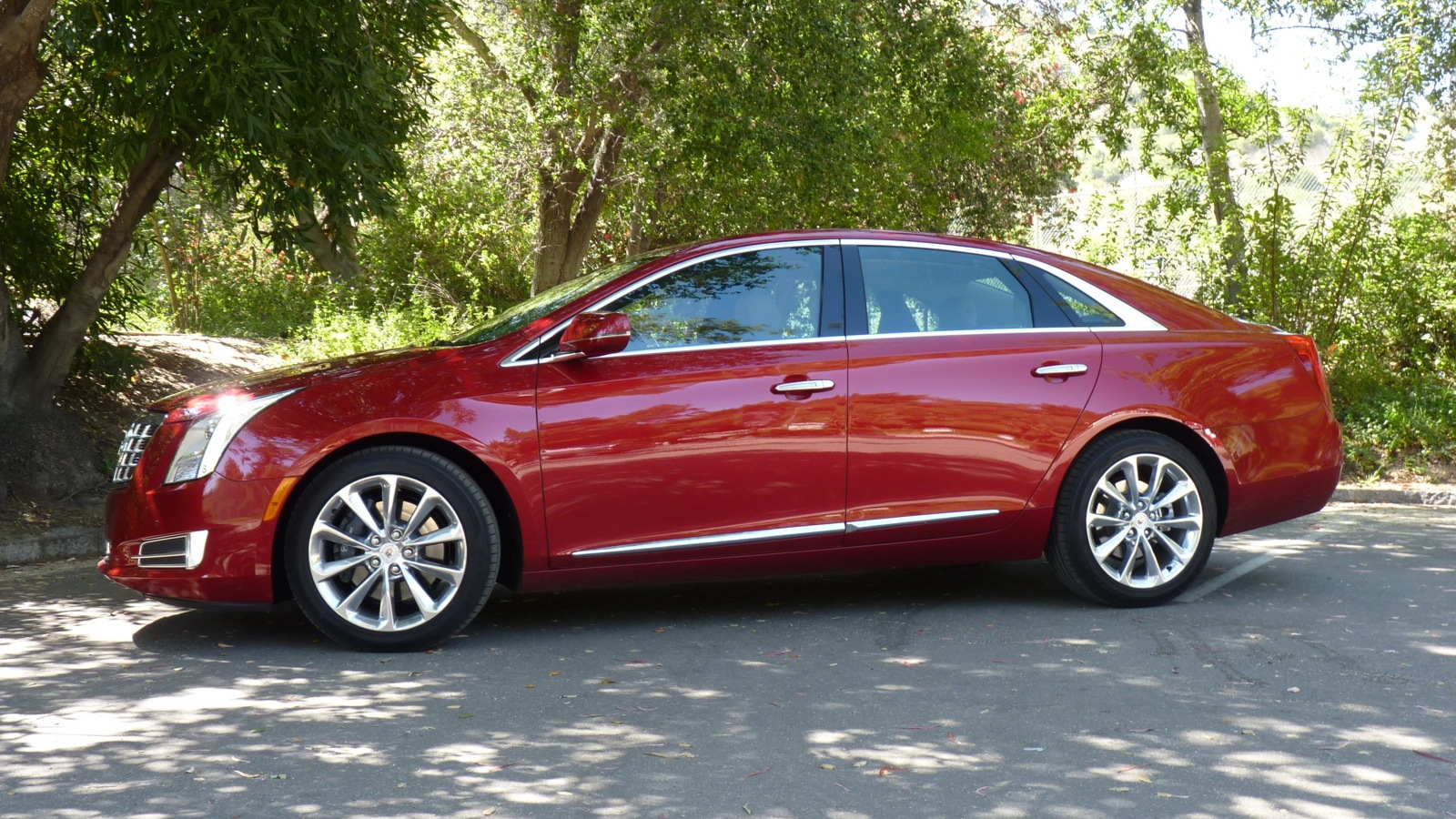 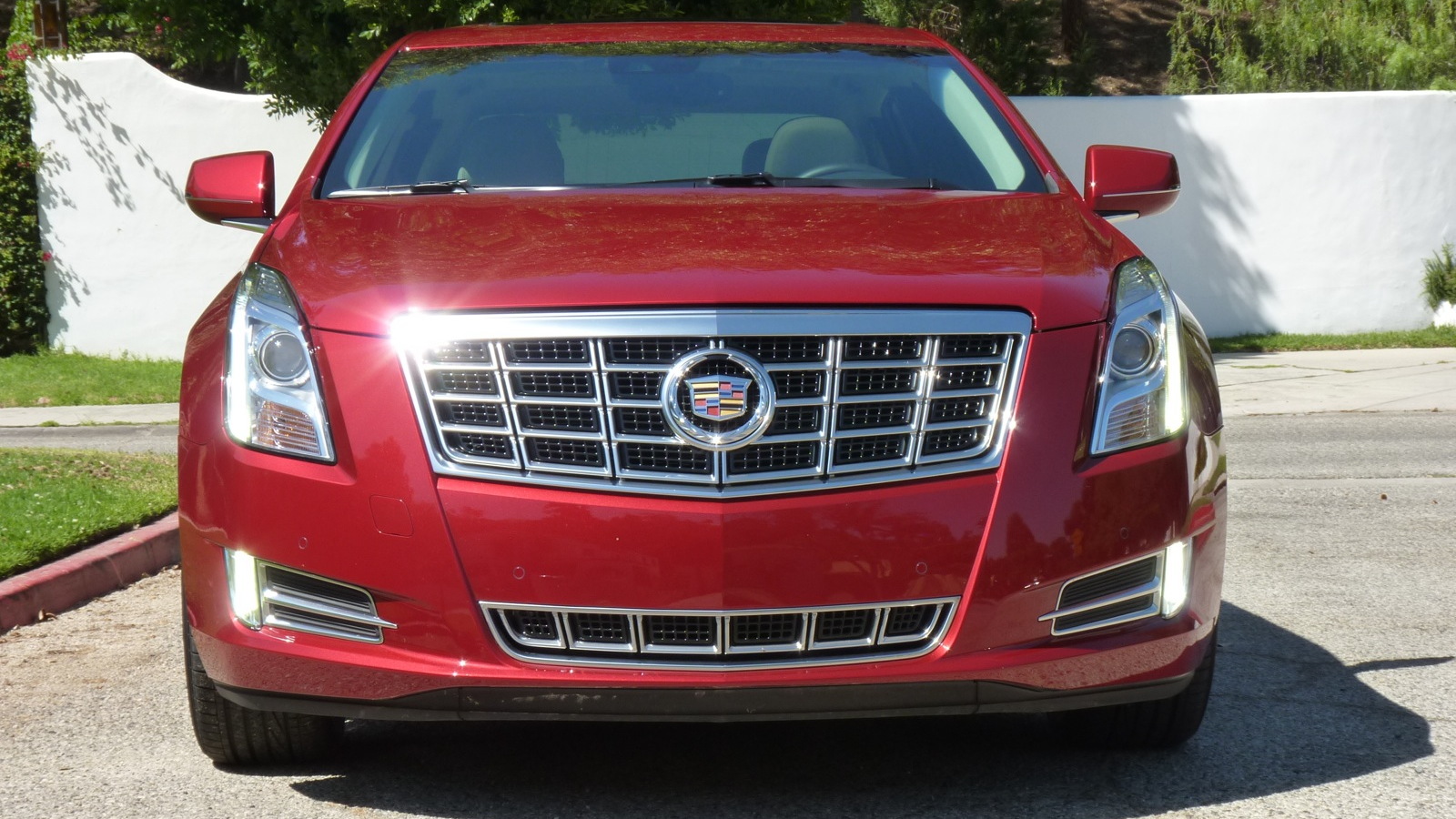 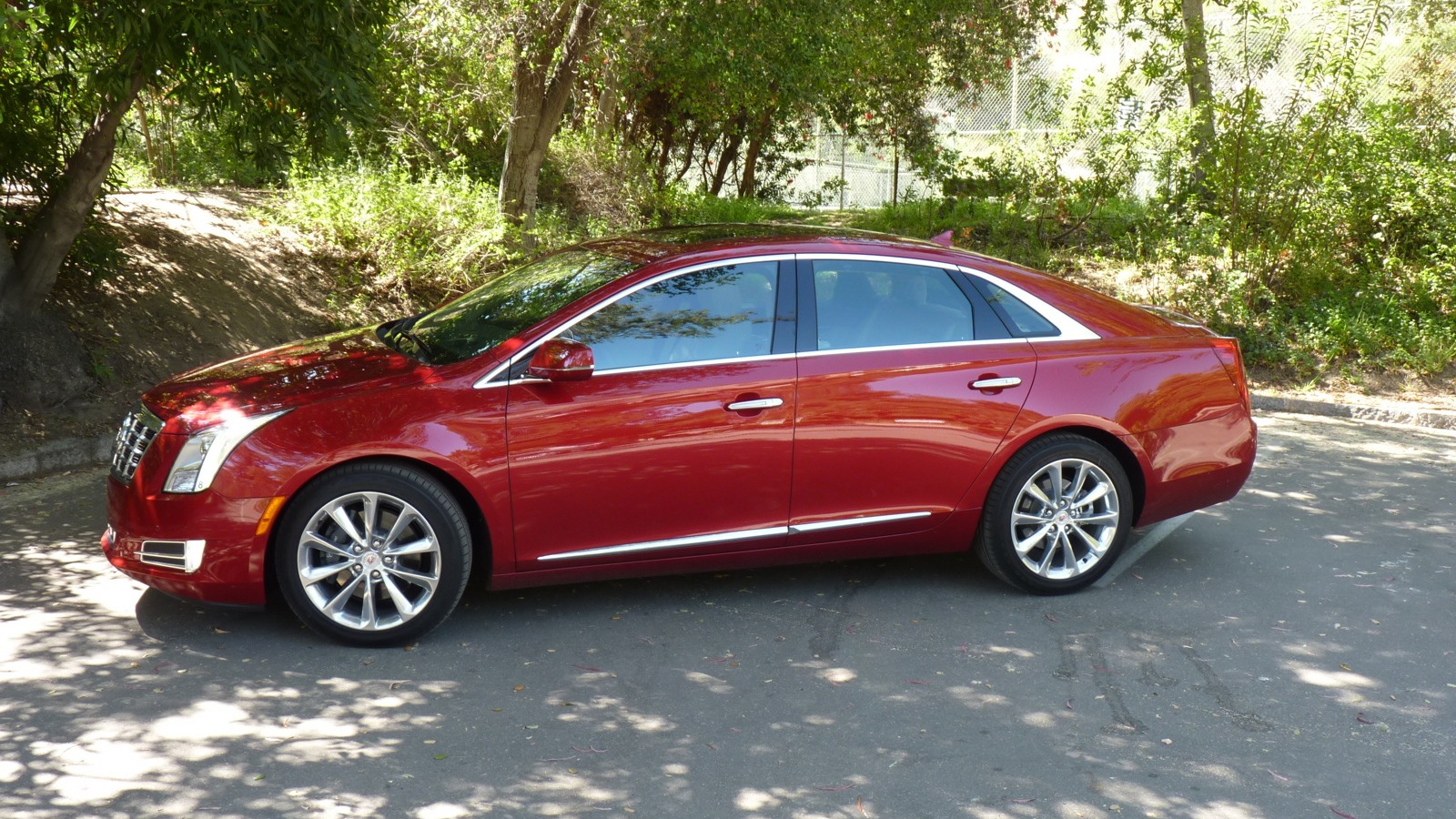 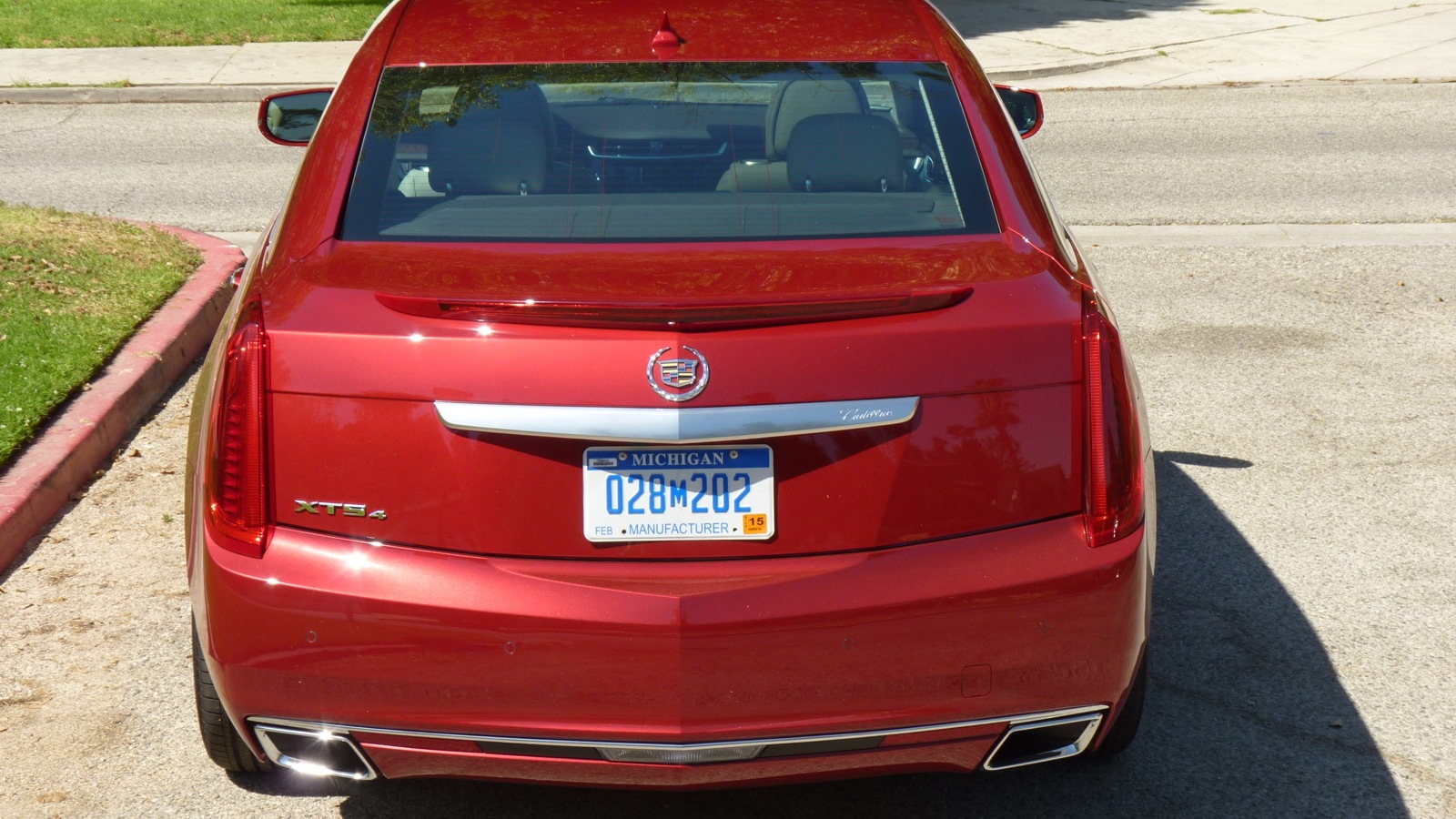 Climbing into the XTS for a drive, it was hard to not think of all that Cadillac officials had cautioned us the technology-focused 2013 Cadillac XTS isn’t. It isn't a new flagship model for the brand; it isn’t intended as a performance-oriented model; and it isn’t expected to be on the radar of those considering the CTS or ATS sport sedans.

But at the center of the XTS's instrument panel is a reminder of this sedan's leading-edge feature set: an eight-inch, fully capacitive touch screen—like what's used in iPads and other tablets, and the first of its kind to be integrated into a new car. The system comes standard, cleaning up the dashboard and leaving it remarkably free of physical buttons; and in many XTS models there are no real gauges either—just a reconfigurable 'screen' of simulated ones.

All that aside for the moment, what else is the XTS? Outside of fancy footwork on tight switchbacks, or high-speed proving on the Nurburgring, pretty much everything else that luxury shoppers want. While die-hard enthusiasts would be misguided to even consider the XTS, it’s one good pick for those who want luxury, comfort, convenience, and some of the world’s top in-car technology, along with confident performance.

Just as the bland but utterly comfortable and competent Lexus ES 350 has been the best-selling sedan in the Lexus lineup, with the somewhat more enticing XTS Cadillac has the potential to break into the heart of the luxury market—an area it’s been skirting in recent years with a little too much bold and brash.

So it’s certainly no mistake that the XTS takes a step back from the upright, sharp-edged look. It’s a good-looking car on the outside, and while the boxed-out front and rear appearance give the XTS a distinct look, you can see some resemblance to the Buick LaCrosse in the profile and softly arched roofline (it’s also related to the upcoming 2014 Chevrolet Impala). Inside, the XTS’s instrument panel and interior trims look like those of no other GM vehicle; they quite closely follow the look of the XTS Platinum Concept (first shown at the 2010 Detroit auto show). It has elements of the Art & Science themes that have now been seen in Cadillacs for years, but there’s a swoopier look and softer details throughout.

And of course the centerpiece is CUE (the Cadillac User Experience), a system that comes standard on all 2013 XTS models and places an expensive piece of equipment—a true capacitative glass touch screen—at the center of the dash.

The XTS rides on the same 111.7-inch wheelbase as the Buick LaCrosse, and it keeps the same basic Epsilon platform that also underpins the new 2013 Chevrolet Malibu as well as the upcoming 2014 Impala, but here Cadillac has added a few extra inches of overall length, mostly to trunk space.

With both the MagneRide suspension system and active noise cancellation standard—even on the base model—there are more than a few hints that GM has done more than a badge-engineering job with the XTS, and it impresses as more sophisticated than just a ‘badge-engineering’ job with upgraded materials and some extra sound blanketing. And if there was any doubt, seeing those Brembo brake calipers (they’re another standard feature) is an added reassurance.

Athletic beyond its mission statement

While its CUE infotainment system needs something of an orientation session (we’ll get to that in a bit), thankfully just driving it does not, and otherwise the XTS is delightfully simple, with a normal shift knob and no complicated custom-performance interface. Unlike many other luxury cars today, there are only two modes—normal and sport. To get to sport mode, you merely pull the shift knob back to 'M,' where the XTS gets a somewhat firmer setting for the magnetic dampers, plus a more abrupt throttle setting, and full manual control with a touch of the paddle-shifters. That's all there is to it.

The engine, a 304-hp version of GM’s 3.6-liter V-6, starts with nary a shudder and settles to a smooth idle. Front-wheel-drive cars weigh about 4,000 pounds, while all-wheel-drive models weigh 200 pounds more than that. You do tend to feel that weight more than a little bit when taking off from a standing start—about the only time that the V-6 seems to labor a bit, until it gathers revs—and when braking hard, with some noticeable nosedive (even though it’s in theory curbed a bit by the HyperStrut design). Throttle tip-in—perhaps in a nod to a more hesitant target driver here—is more aggressive than that of the CTS. Otherwise, the six-speed automatic transmission does a great job in Drive, in keeping the revs up when they’re needed and bringing them down when they’re not. From inside the vehicle, you only hear the engine when pressing it hard—in the range of 4,000 rpm on up—so when you’re just commuting or cruising it’s way in the background.

Where you don’t feel the weight nearly as much—and where we expected to feel it more, honestly—is in cornering. The XTS doesn't throw its weight around; it loads and unloads in a confident way, and stays surprisingly flat. More importantly, it rarely feels flustered, with MagneRide helping with that impression, soaking up road noise and minor harshness. And for those begging to compare it with the LaCrosse, you simply won't find much in common dynamically; it has a different attitude on the road, with strong straight-line highway tracking, as well as a more Germanic luxury-car ride. There are two wheel sizes (19- and 20-inch)—and the differences between them, from behind the wheel, really is minimal.

Dynamic prowess is of course not the XTS's primary mission, of course. As Cadillac's marketing vice president Don Butler seemed eager to point out, the XTS is no STS replacement, and it’s no replacement for the DTS. Think “right-sized,” not “maximum-sized.” In fact, the competitive set for the XTS is a bit muddled; it lands in about the same realm, length-wise, as the short-wheelbase Audi A8, Mercedes-Benz E Class, and BMW 7-Series, and yet it also takes on the likes of the Lincoln MKS, the Lexus ES, and possibly even the Hyundai Genesis V-6.

Compared to most of those cars, the XTS's secret weapon is its back seat. There’s truly enough space to fit any passenger in comfort. The headliner includes carved-out areas for even more headroom behind the sunroof housing, but even I had a couple of inches above my head. Back seats aren’t quite as contoured as we expected them to be, although the middle backseat position—either more confined, too narrow, or thinly padded in many larger sedans, even—is quite useful here. In a nod to both the Chinese market, where the XTS will sell in basically the same form (except with some trim/equipment differences and a 2.0-liter turbo four under the hood), and to the U.S. livery business (a possibility), nobody will be left wanting for legroom.

In front? Well, you tend to sit a bit higher in the XTS than in other large luxury cars—which means that you get great outward visibility. The downside of that is that the setup doesn’t drop any performance hints whatsoever. Front seats are quite comfortable, but not in the realm of the carved-out, ultra-supportive perches you get in some performance sedans.

The structurally related LaCrosse already manages top crash-test scores—and we expect the XTS to do as well. But one option offered that may help you be even more secure, beginning this fall, is a Driver Awareness Package, rolling a host of active-safety features together and taking advantage of camera technology and short- and long-range radar systems (for just $890). While we've seen versions of most of this technology in other Cadillacs or other vehicles before, it's comprehensive, with a full suite of sensing and safety-related technologies, including full-speed adaptive cruise control, rear cross-traffic alert, side blind zone alert, lane departure warning, and low-speed automatic braking.

It's also the first car to use a directional tactile sensation in its seats to ‘point’ to the direction of a hazard. For instance, with the XTS’s lane departure warning system on, it would give us a subtle vibration on the left side of the seat as we weaved over to the center line; or as we approached stopped traffic, it gave us a couple of more aggressive pulses from both sides of the seat.

The XTS comes in standard guise, plus in Luxury Collection, Premium Collection, and Platinum Collection versions. We drove both Premium and Platinum models, which pack in the most technology and luxury features. CUE and its big fully capacitative touch screen is standard across the line, but the big reconfigurable gauge cluster, which offers several layouts plus lots of customization, is included only in Premium and Platinum models. So is the much-improved Head-Up Display, which projects critical information onto the windshield; premium sound; and navigation functionality for CUE. So if you want to take advantage of the technology, you'll want one of those two top models.

As for CUE, it's one of the most attractive, most intuitively laid-out interfaces yet, but it's not without its little issues. We appreciated how the system has a depth of customization possibilities once you get into the submenus, yet on the surface it simplifies the choices. Thanks to proximity sensing, bring your hand a certain number of inches near the screen, and it opens up more menu choices. And we loved its natural-language capability, for the most part. You can simply say things like “Take me to Starbucks,” or “Let's go to Starbucks,” and it's not so dependent on hitting specific command-tree words. Also, screen scrolling is smooth and glitch-free, and the live-traffic features that have been cause for frustration in so many other vehicles seemed to work flawlessly here, with better detail than most other systems present.

There were a few inconsistencies in the screen controls that left us puzzled—like why the favorites bar seemed to scroll from one ‘page’ to the other much more easily in one car than in another, and how we also noticed more of a latency issue on one system than in another. We're looking forward to playing with CUE at length in production models.

VP Don Butler doesn’t hesitate in pointing out that Cadillac is in a transition period with the XTS. What we’re going to see is a full line of luxury vehicles, each with a looser interpretation of what Art & Science means, for each individual purpose.

Ultimately, GM seems to have created a sedan that’s what the STS used to be: front-wheel-drive, yet incorporating some of the best tech features, along with performance extras that don’t too much affect comfort.

Better than expected...but what about that price?

While pricing might seem steep (especially if those flagship models are yet on the way), and CUE is yet to be proven, the XTS is Cadillac's first all-new model since 2009—and its first new model under the new GM—and it's clearly on the right track. With both a coupe and sedan flagship likely on the way within the next several years, look for this sedan (and CUE) to fit right into a line of products that pile on the tech and establish Cadillac as a full-line global luxury brand.