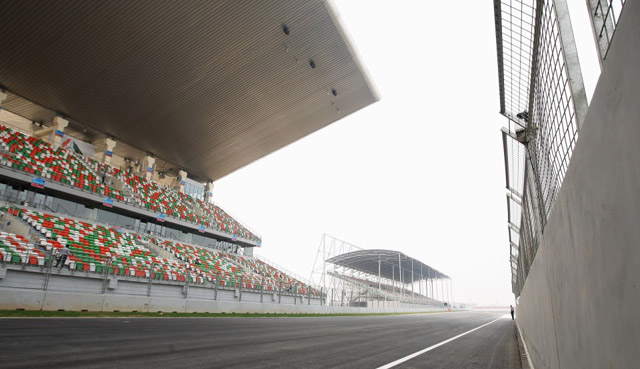 The Buddh International Circuit, home of this weekend’s 2011 Formula 1 Indian Grand Prix, represents new territory for F1 teams, in one of the fastest-growing automotive markets in the world.

The newly-constructed track stretches some 3.192 miles, with drivers on Sunday scheduled to make 60 laps. It features a total of 16 turns, three high-speed straights, and elevations changing by up to 45 feet.

With a brand new circuit, there is no prior data at all, so the task of preparing for the race becomes much harder. Fortunately, teams do get basic track data such as the corner radii and the length of the straights, but racing on a simulator and in real life can be very different as any race driver will tell you.

Otherwise, it’s business as usual, with Sebastian Vettel looking to secure even more wins for himself and his Red Bull Racing team, and his team-mate Mark Webber eager to end the season in second place.

There will also be two Indian natives on the track, with HRT test driver Narain Karthikeyan replacing Vitantonio Liuzzi for this weekend’s race. He won’t be joined by Lotus tester Karun Chandhok as the British-based team is choosing to stick with regular drivers Jarno Trulli and Heikki Kovalainen, though Chandhok was out on the track for practice earlier today.

In the Drivers' Championship Sebastian Vettel sits on 349 points, followed by Jenson Button on 222 points and Fernando Alonso on 212 points.

In the Constructors’ Championship Red Bull Racing is the recently appointed title holder and sits on 558 points, followed by McLaren on 418 points and Ferrari on 310 points.

Stay tuned for our complete coverage of the 2011 Formula 1 Indian Grand Prix this weekend.