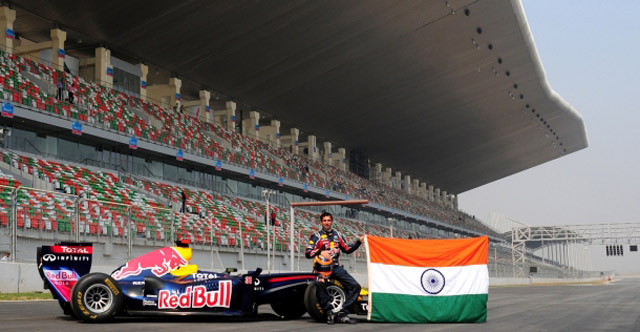 This weekend is the inaugural Formula 1 Indian Grand Prix, which is taking place at the newly constructed--and still incomplete in some areas--Buddh International Circuit just outside of India’s capital New Delhi.

Originally designed by renowned German race track architect Hermann Tilke, the Buddh International Circuit has been tweaked by the organizers after it was tested on simulators by several of the sport’s teams.

The Red Bull Racing team was fortunate enough to be the first F1 team to tackle the circuit, with test drivers taking out the running show car for a little fun and to get a feel for it.

The Buddh International Circuit stretches some 3.192 miles, with drivers on Sunday scheduled to make 60 laps, and it features a total of 16 turns, three high-speed straights, and elevations changing by up to 45 feet.

Enough time wasting; see what Red Bull Racing’s Mark Webber has to say in the video below, which also includes a virtual lap of the circuit.